The 2022 Epcot International Festival of the Arts is opening Friday, January 14, 2022 at the Walt Disney World resort in Orlando, Florida and this is your complete guide to vegan food offerings at this year’s event. 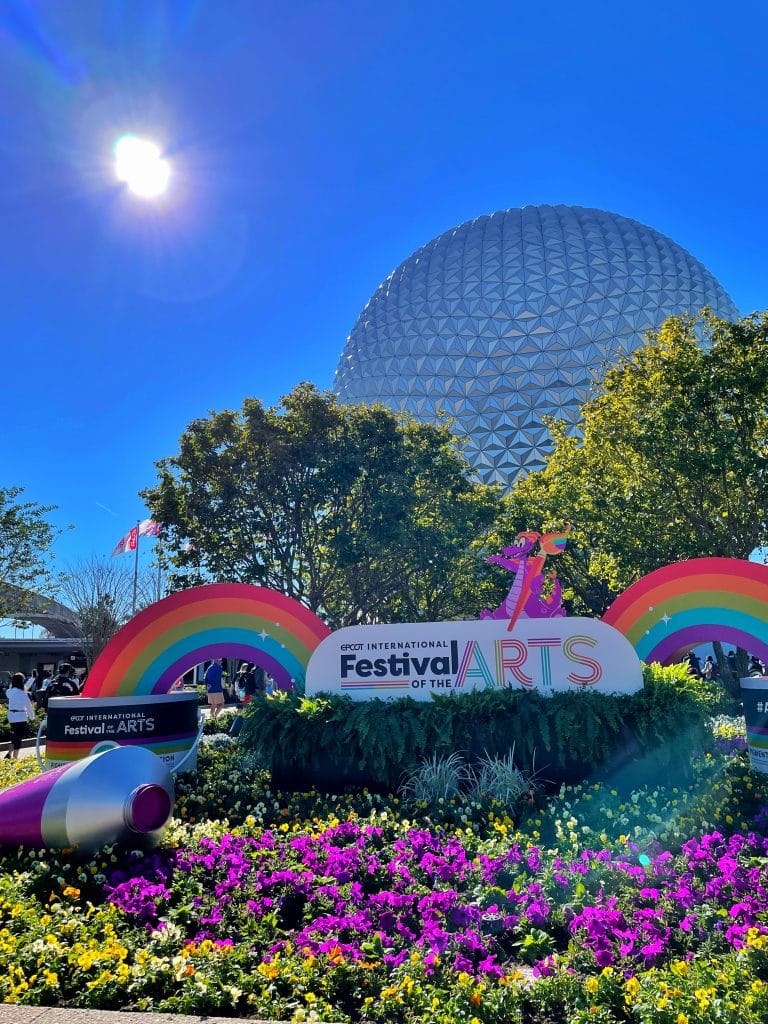 Despite the current state of the world and the parks, this year the Disney Broadway series is returning along with the usual photo ops, mosaic painting, chalk art and Figment scavenger hunt. Celebrating its 6th anniversary, the Festival of the Arts usually features less food items than other Epcot festivals such as the longer running Epcot International Food and Wine Festival and Epcot International Flower and Garden Festival. We have updated the post below with the 2022 vegan items and will be updating beers and other items throughout the festival if anything changes, so be sure to bookmark this page and check back, and follow us on @VeganDisneyFood on Instagram for the latest news!

Despite the limited vegan offerings, this festival is so much more than food! It’s a veritable cornucopia of culinary, visual and performing arts. Even with some changes this year, it’s still one of our favorite EPCOT festivals (although after the recent menu release, that may change). You can read more about the complete festival offerings on the official Disney website.

For now, let’s focus on the vegan eats. If you’d like to see just the snacks, drinks and desserts, from last year, head to our Vegan Snacks and Desserts at the EPCOT Festival of the Arts post! 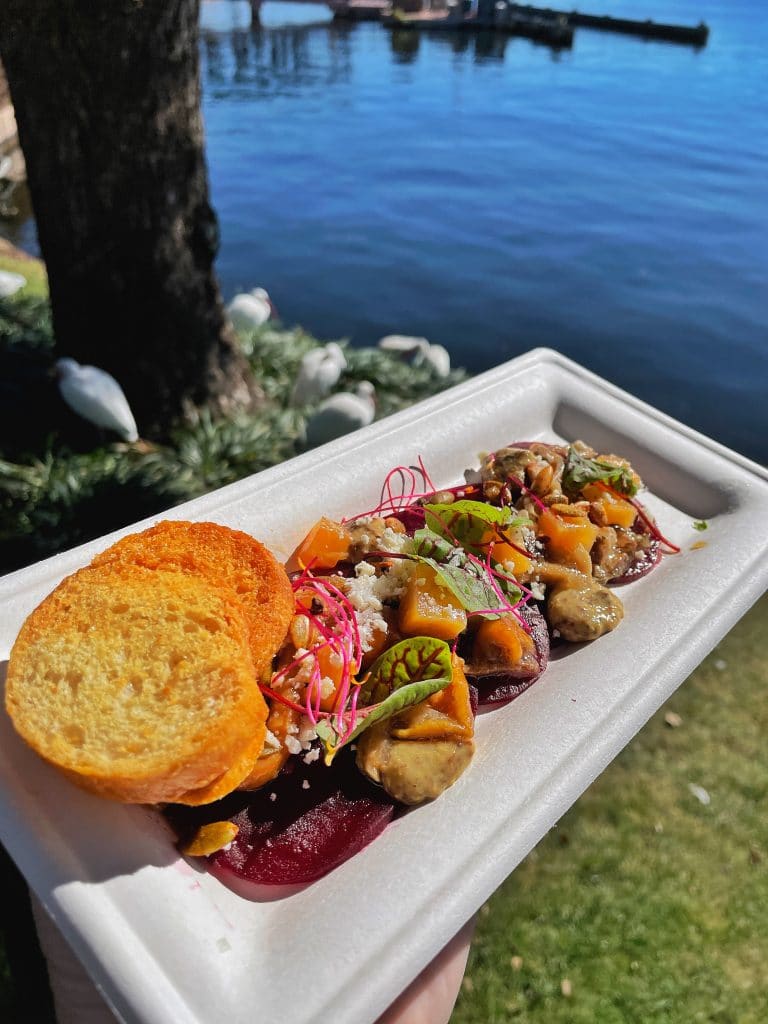 We attended the opening day of the Festival and tracked down ALL the vegan offerings at this year’s Festival of the Arts. If you’d like, you can check out our video review of all the vegan items for 2021 below as well. Be sure to like and subscribe to know when we upload a new vegan video!

This year (2022) we will sadly have much fewer options than previous years. It appears that there are only 3 vegan items on the menus.

Savor stunning dishes artfully composed with the finest ingredients farmed and foraged from the land.

This replaces a beets dish from last year that was served inside World Showplace. The beets were a love it or hate it item last year (I loved them!) so I’m looking forward to this dish. 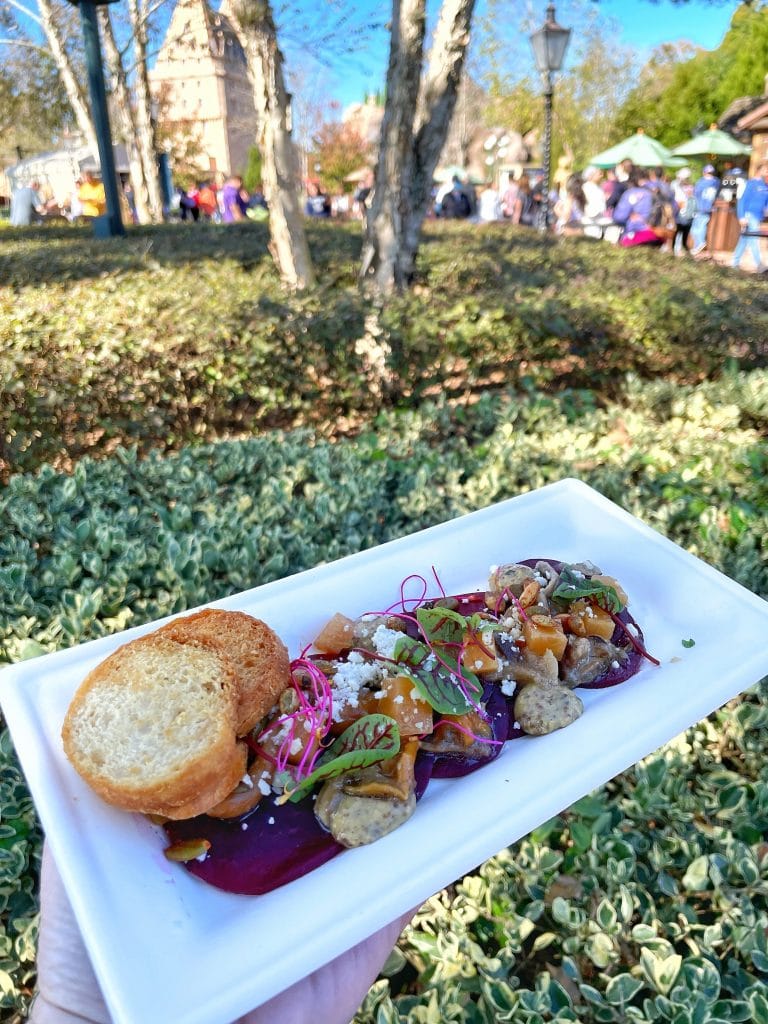 Next up, Tangierine Cafe, which has been a Festival location for the past few festivals now.

Take your taste buds on a Moroccan adventure as you enjoy delectable dishes.
Food: 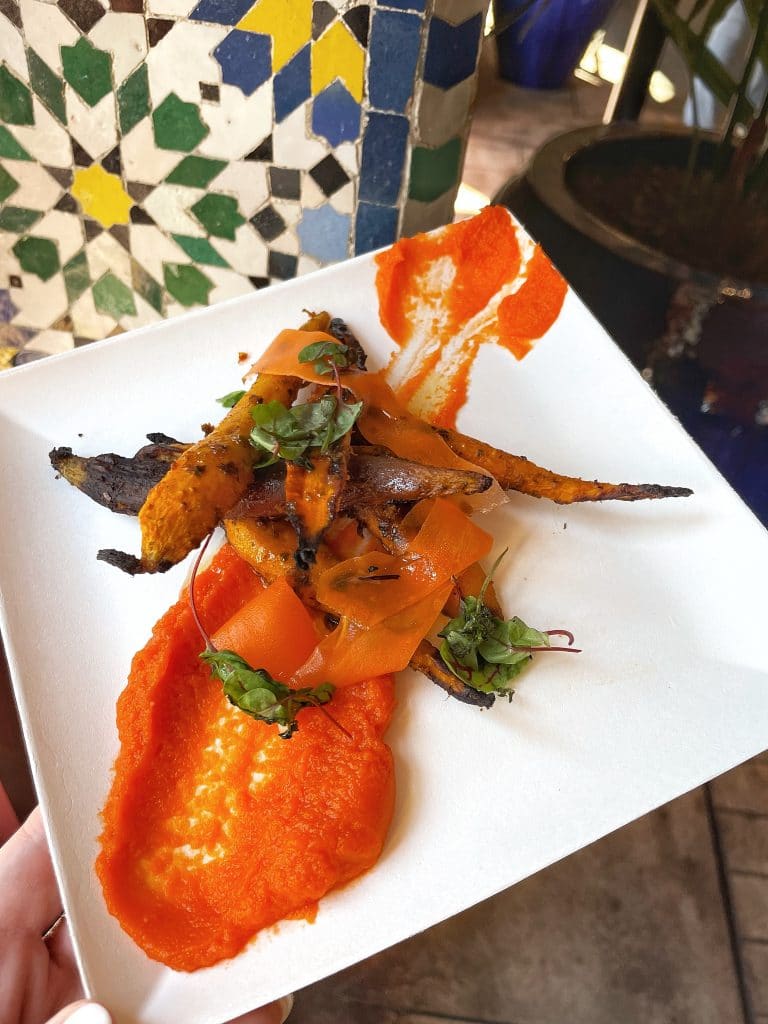 I did not have high hopes for this dish, just carrots…how good could it be? But it IS good! The pureed ginger carrots are full of flavor, a bit salty, but when you eat them all together it works. The pickled carrot was also delicious with a tiny kick of spice. The Berbere spiced grilled carrots were also full of flavor and really anchored the dish. Loved it.

Returning this year is the Plant-Based Brat from The Refreshment Outpost in between China and Germany . 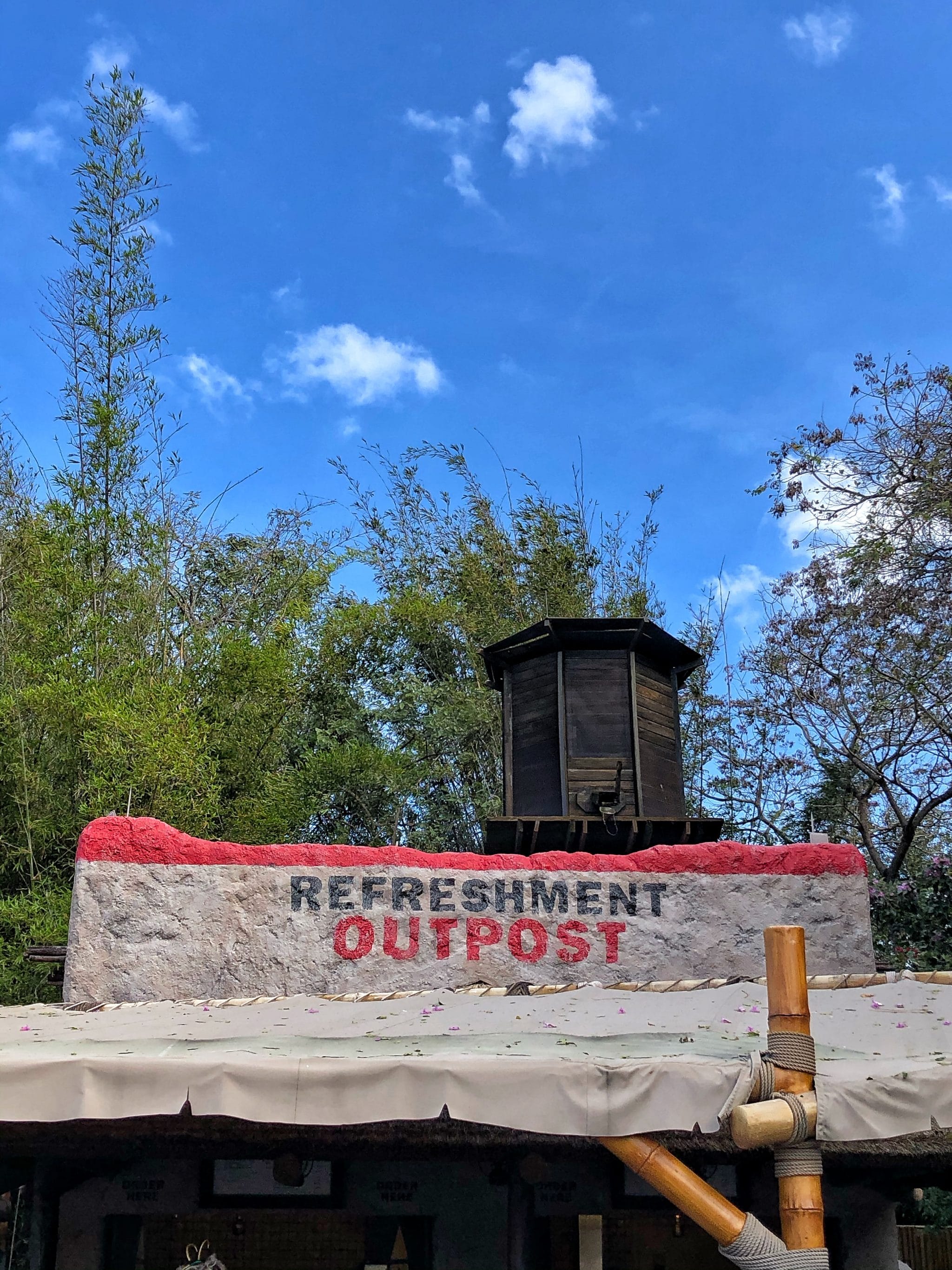 Order the Plant Based Bratwurst ($9) here.

The Plant-based Bratwurst is topped with a turmeric aioli, coffee barbecue jackfruit and vegan slaw. It came in a warm vegan bun. You’re definitely going to need some napkins for this one.

This Brat is a major win. The flavors worked well together and the slaw gave the dog great texture. We couldn’t really taste the jackfruit in this dish, in fact, this year on opening day, I think it was just straight up plain jackfruit with no sauce. The aioli is described as spicy but we found it to be rather mellow. It’s a great, filling option.

Also over in the Refreshment Outpost is a new Dole While flavor. They change the flavors out with each festival and the Festival of the Holidays had a weird lime-coconut which was NOT vegan, but now it’s Cherry and Pineapple, which is vegan! We tried a swirl and I actually really enjoyed the black-cherry flavor mixed with the classic pineapple. 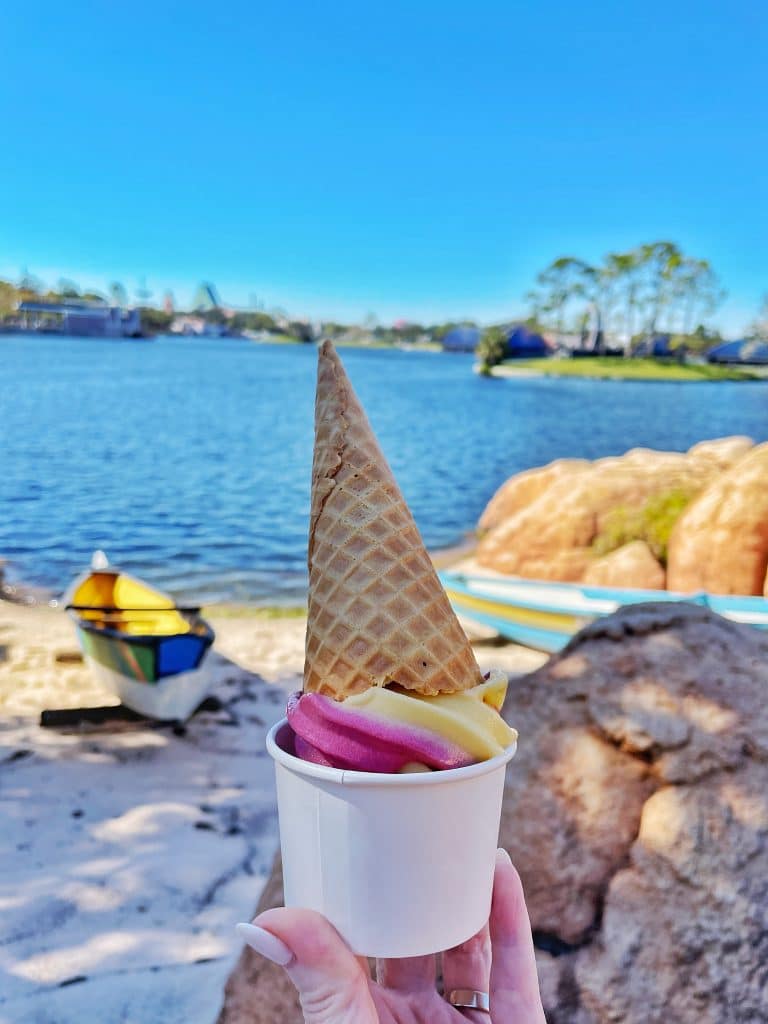 The cones they are currently using are Jagger brand and are confirmed vegan. You can get it in a cup or a cone (or both!). 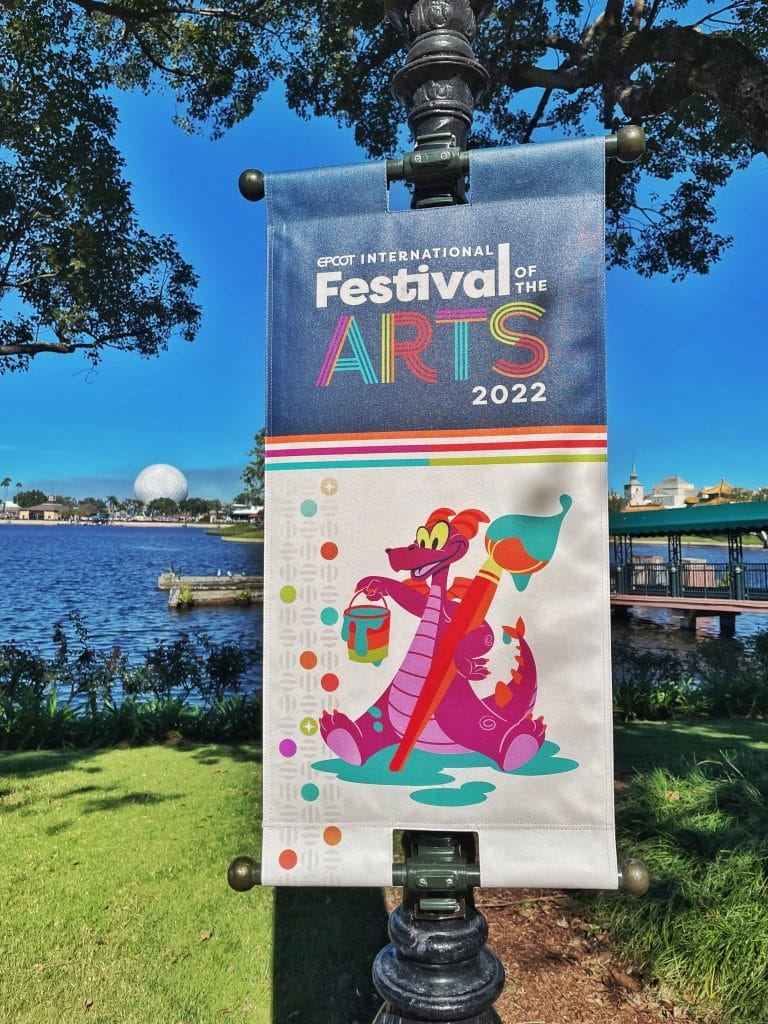 The Color Stroll again features one vegan item. This passport of colorful food items features 5 available stamps, and like the Cookie Stroll during the Festival of the Holidays, you can get all 5 of the same item, but the “prize” is an artist palette cookie, which is not vegan.

We do have one modifiable option – similar to the Giant Tostada from the Festival of the Holidays which can be modified without meat and is vegan. At El Artista Hambriento in Mexico, order the Huarache Verde for $7.50. When you get to the window to pick up, request it with NO pork – the Cochinita Pibil. You’ll get the same black beans served on the Giant Tostada atop a cilantro masa tortilla with pickled onions and pineapple. Our reporter said this was a great combination of savory and sweet and he would get it again. It’s up to you if you’d like to spend the $7.50 for it. The Giant Tostada was $9 but it was also, well, giant. Our first attempt below was snatched up by a seagull and as you can see, the second serving did not have as much going on in the bean department (and they flipped the pineapple and onions). 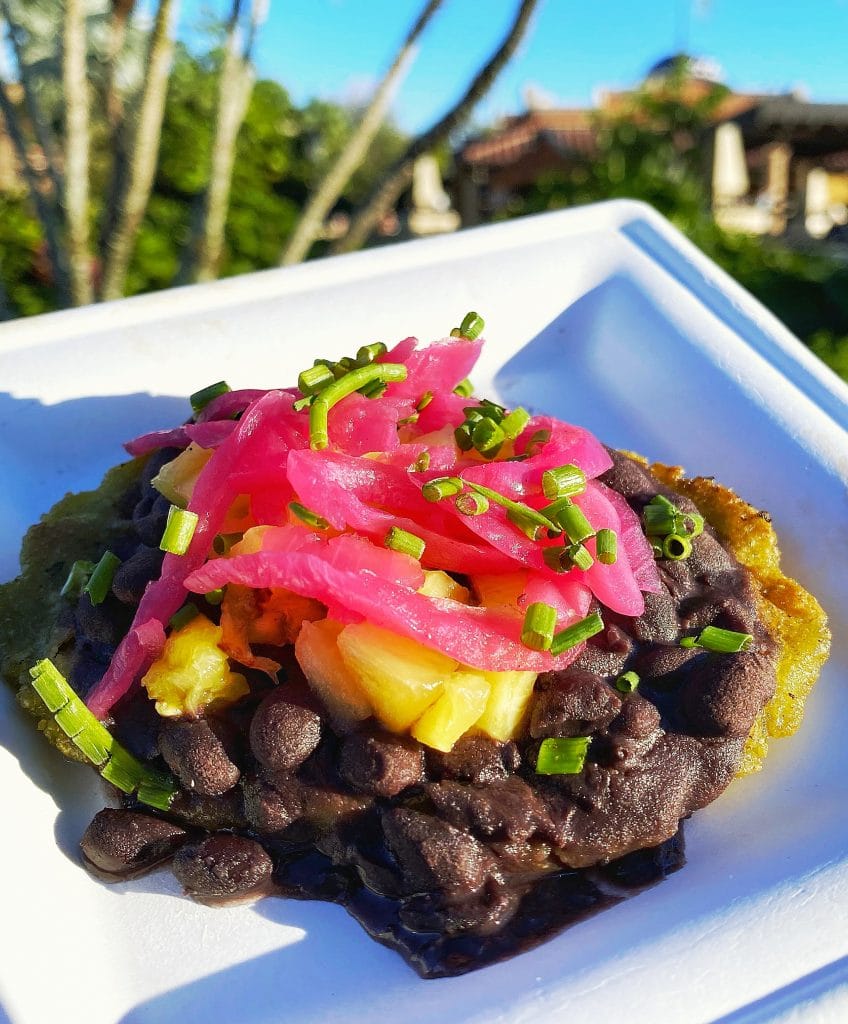 And that’s it. Last year we had beets, the ratatouille, the gyoza, and the brat, so technically the numbers are the same, but missing those gyoza really stings. Of course there’s also the delicious Passion-Coconut smoothie and the Dole Whip. I initially didn’t think the Passion-Coconut smoothie was returning, but it was there today, so that is another vegan option for a drink/dessert dish. The same souvenir cup returns this year: 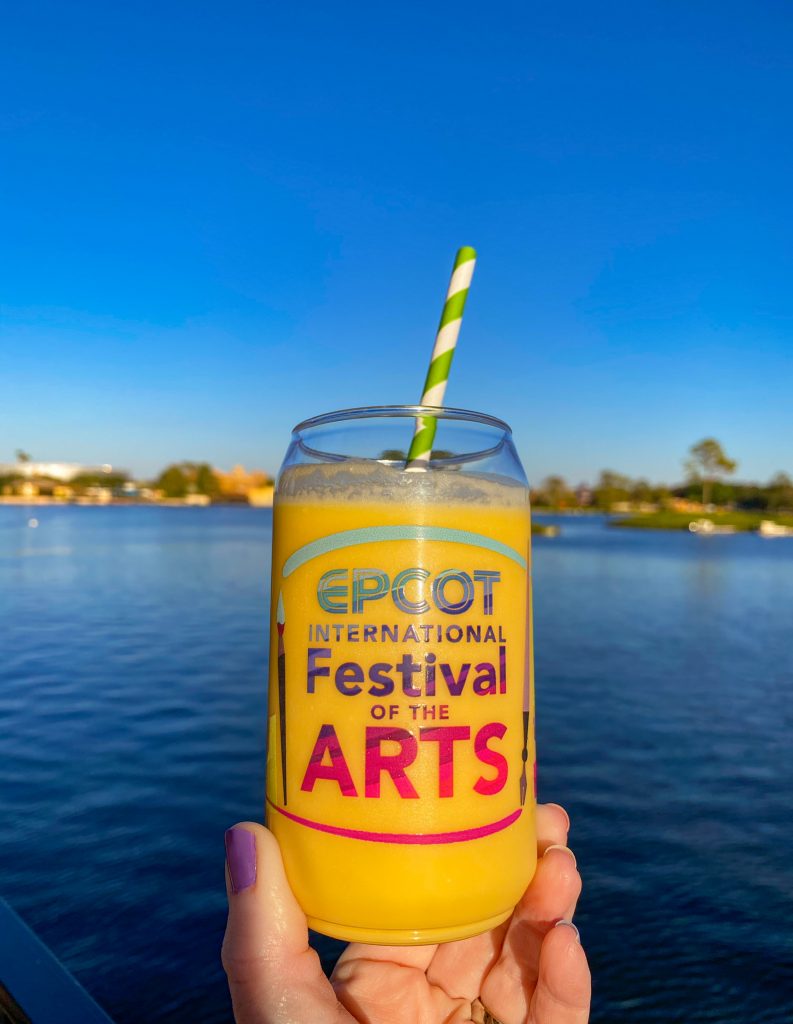 This smoothie is like drinking a thicker, creamier version of POG (Passion, Orange, and Guava) juice that we’ve all come to know and love at the Disney character breakfast locations. This item is a great addition and a refreshingly tart way to add to your Festival of the Arts day. This booth has an Encanto tie-in, and in DCA they offered a vegan arepa, so it’s very disappointing that we didn’t get that option over here as well.

I just want to take a moment to remember that for the past two previous years, the Goshiki booth in Japan featured Vegetable Gyoza which were modifiable by removing the mashed potatoes. Sadly, they are not being offered for the 2022 Festival of the Arts. Major sad face. Let’s reminisce… 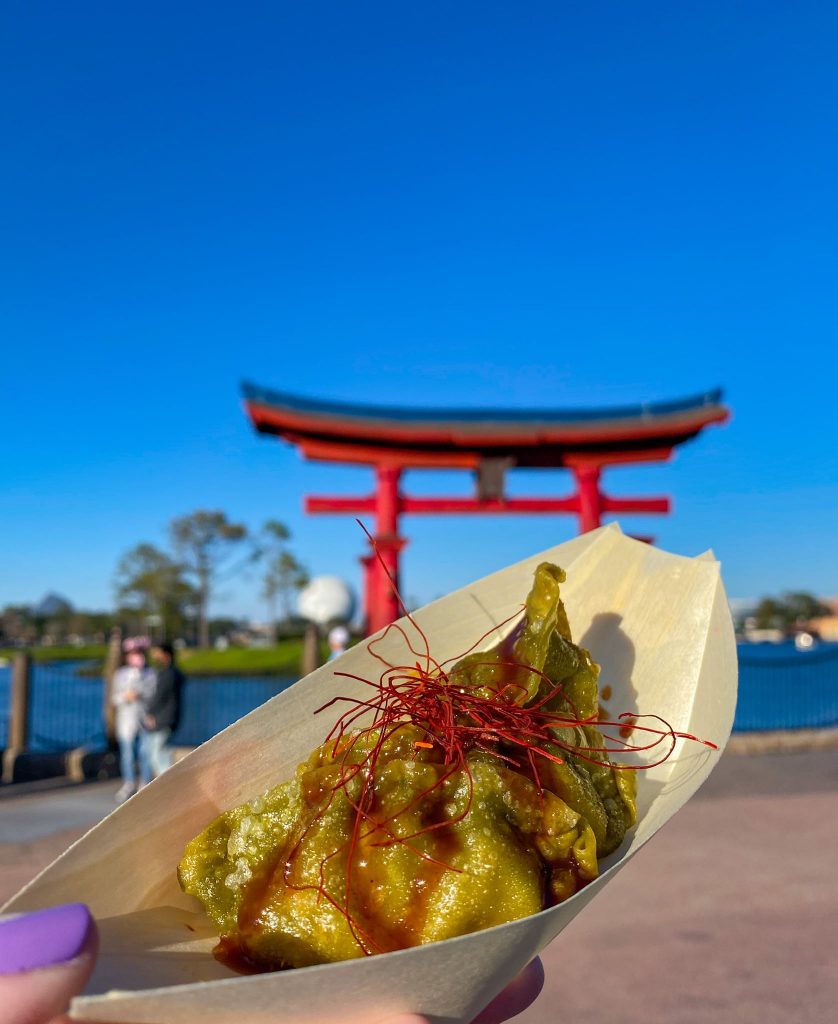 This was such a fun offering. The gyoza were pan fried so they were a bit crisp on the outside with a tender filling dotted with whole edamame beans. The pepper strings don’t really have much flavor at all and are mostly just decorative, not spicy in the least bit. The Tonkatsu sauce is much more tart than regular teriyaki sauce, you can tell it is made with tangy fruits. SUPER sad these are not returning this year for 2022.

Vegan Confirmed Beer Offerings for 2022 EPCOT Festival of the Arts

We have reached out to the following breweries and confirmed that their beers being offered for the Festival are vegan. We will add to this list as we hear back from more breweries.

For cocktails, be sure to ask about honey or dairy if it isn’t listed. For wines, we advise checking Barnivore.com for vegan status.

The EPCOT International Festival of the Arts runs daily January 14th through February 21st, 2021. Artful EPCOT is included with park admission with a valid park pass (or Park Hopping if available after 2pm). Food samplings are extra and can be purchased a la carte.

Looking for ALL of the vegan options available at Epcot? Check out our comprehensive guide here: What’s Vegan in Epcot?

WANT TO REMEMBER THIS OPTION? Save the “Epcot International Festival of the Arts Vegan Food Guide” pin to your favorite Pinterest board. 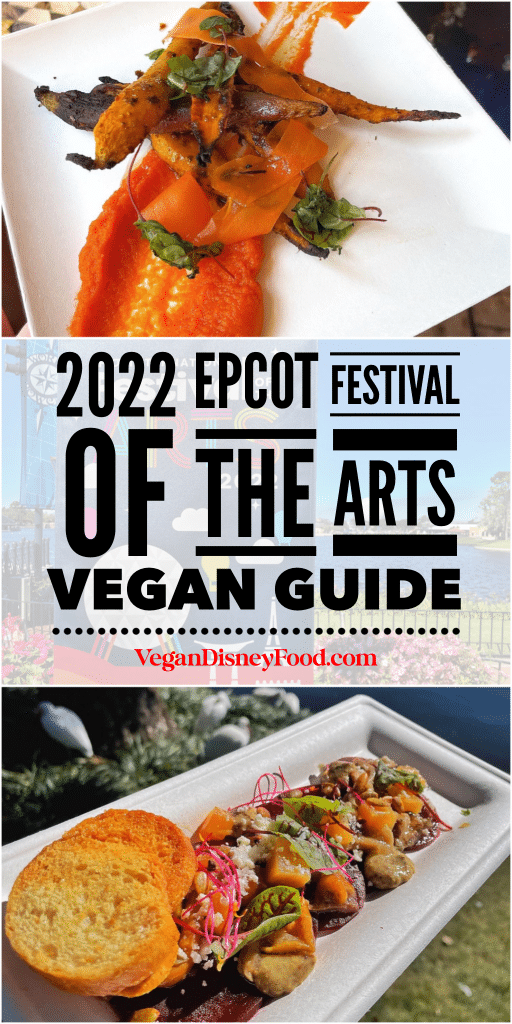