Update November 2021 – we’ve updated our review with new photos and my personal review video of the vegan options at La Creperie de Paris in EPCOT.

The latest attraction is open at Walt Disney World’s EPCOT is Remy’s Ratatouille Adventure and with it comes a new Quick Serve AND Table Service option – La Creperie de Paris. Located at the end of the new waterfront area in the France pavilion, La Creperie is unique in offering table service and quick service crepes to go. But what’s vegan at this EPCOT spot? We got an early peek at the offerings and have now updated that with the latest info. 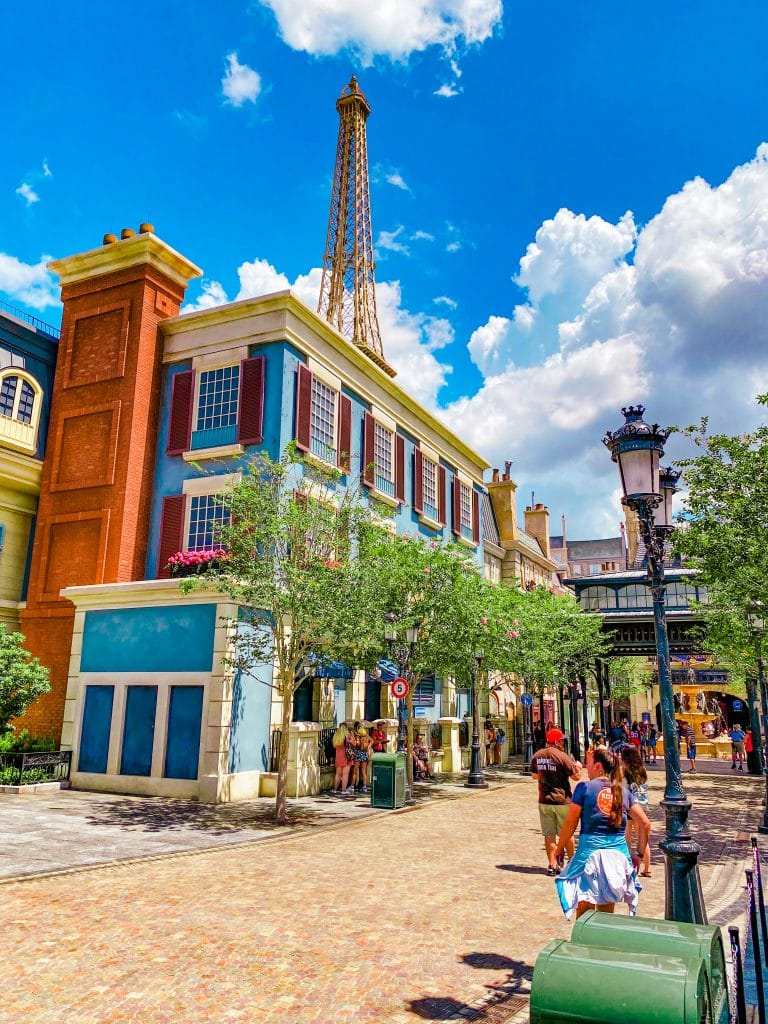 First, the Quick Service “Crepes a Emporter” (Crepes to go) The “sweet crepes” are made with butter and eggs and obviously not vegan. There are crepes with ice cream, and sadly they are not offering any dairy free ice cream at this time. 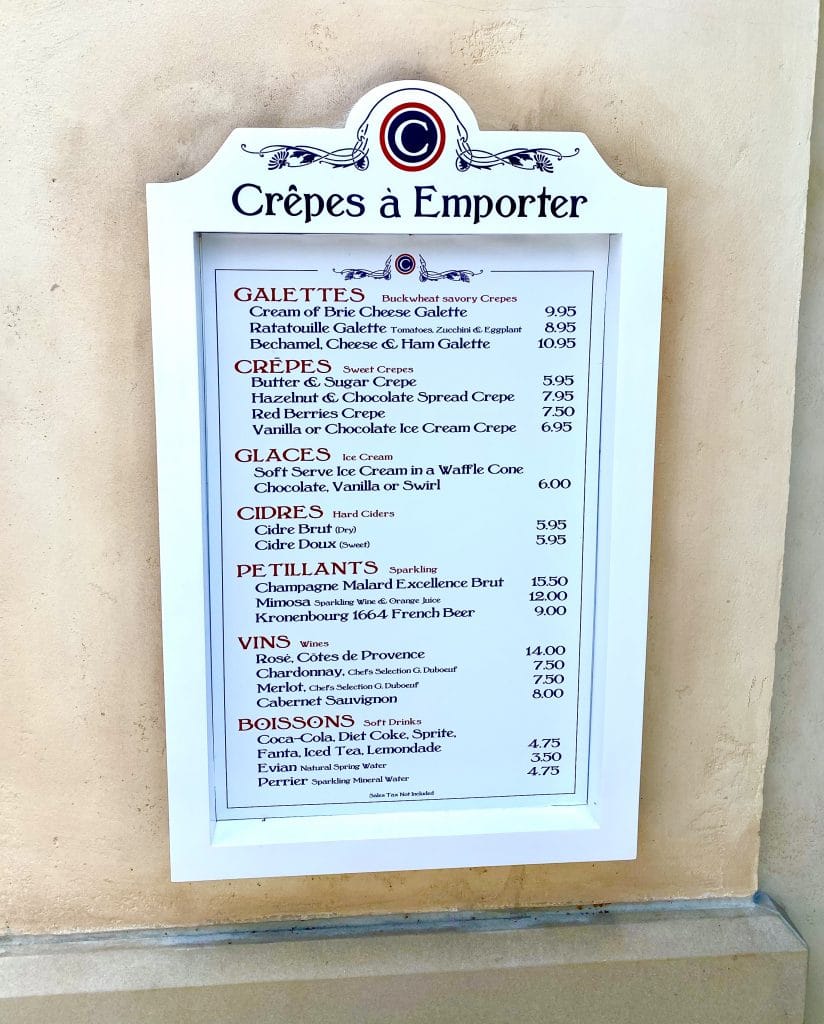 But we do have ONE option, the Galettes or savory options have a Ratatouille Galette which is 100% vegan crepe as is. Made with a buckwheat crepe (literally just buckwheat, water, and salt), the ratatouille filling is vegan as well. They are also “gluten-friendly.” Tres Bien!! You could also ask for the Red Berries crepe to be made with the buckwheat crepe and it would be vegan as is. 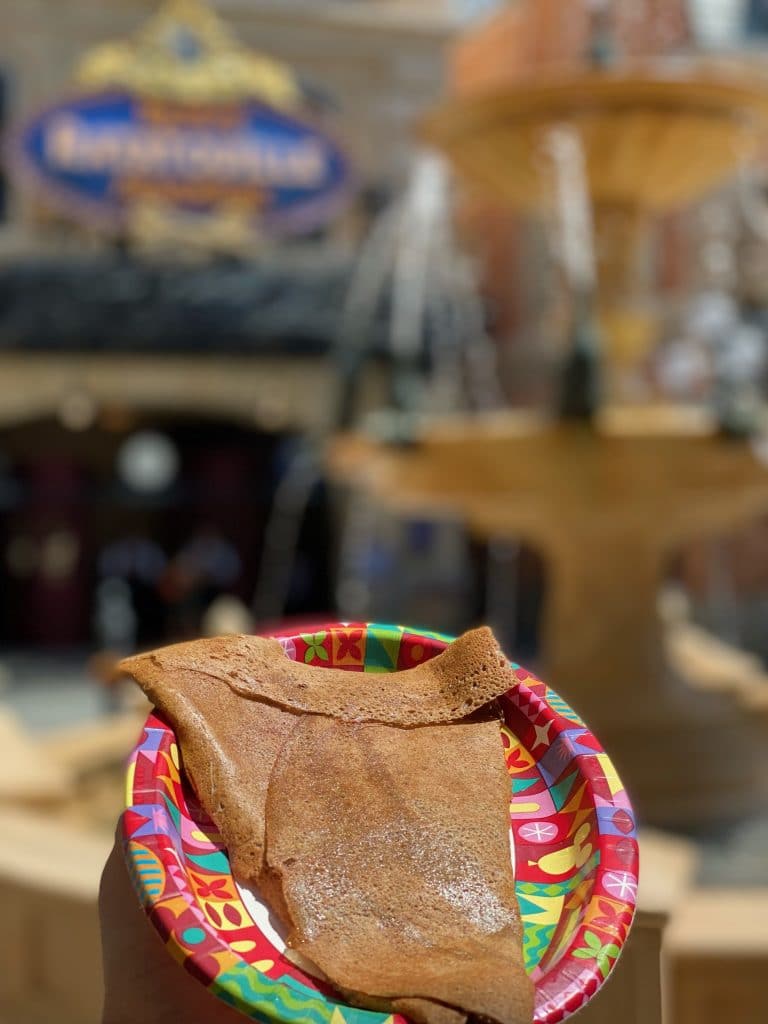 I’m thrilled to have a vegan crepe in EPCOT and even more excited that we have a modified option as well. Now we may enjoy this lovely new dining spot in France in EPCOT too! It may not be the most photogenic, but having a vegan crepe in France in EPCOT makes it taste all the better. The serving at the Quick Service/outside location is smaller than the table service option, and lower in price as a result too.

Now, for table service at La Creperie de Paris, there is a slightly more extensive menu. There is a soup du jour, a house salad, and additional savory and sweet crepes, as well as a prix fixe menu option which gives you a selection of each for one price.

Here is the updated counter service vegan crepe as of September 29: 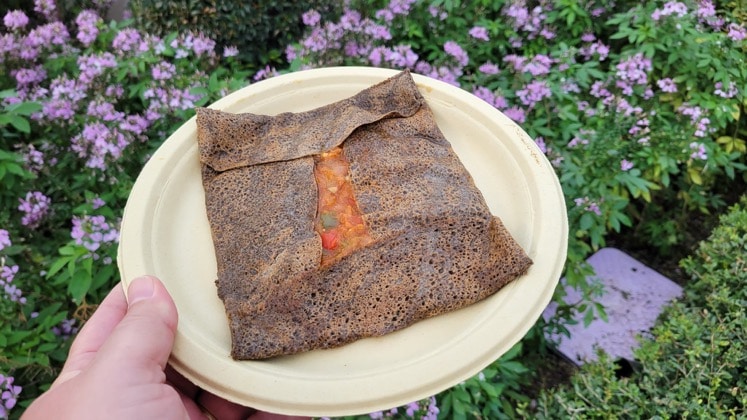 Thanks to TheDisneyBlog for the photo! – It does look a little darker, maybe that was the missing link to have the buckwheat crepe hold up. John from the Disney Blog reported that they didn’t taste bad, but they weren’t anything spectacular either. So La Creperie at EPCOT may be a visit-with-non-vegan-friends option for a place to visit. 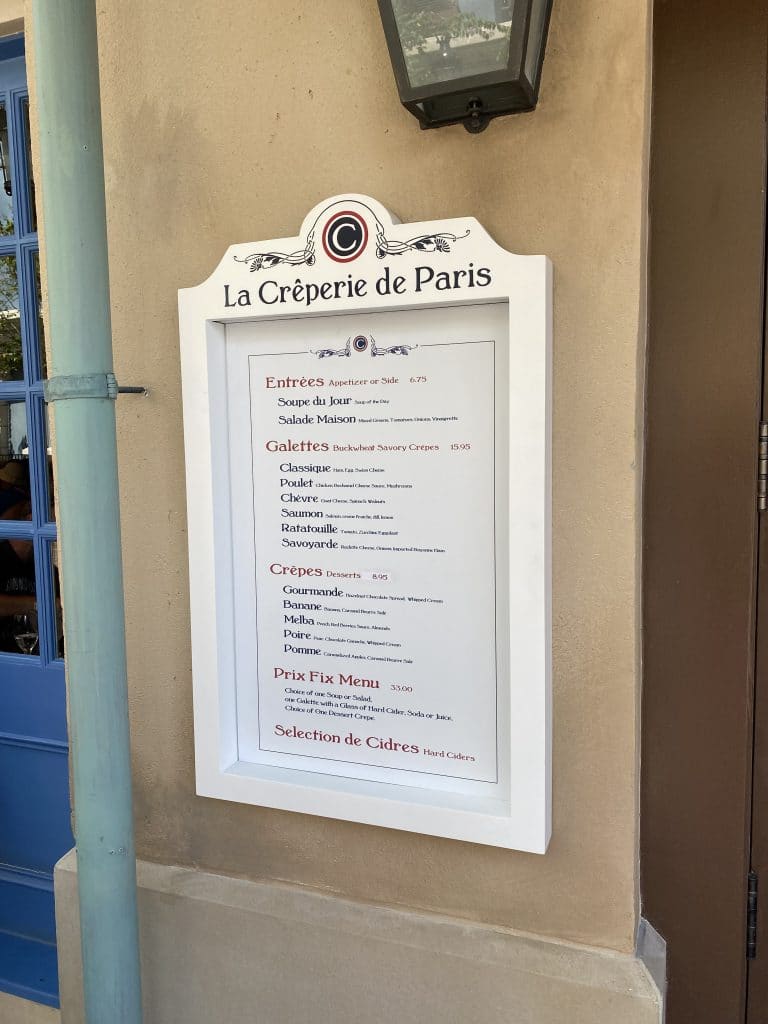 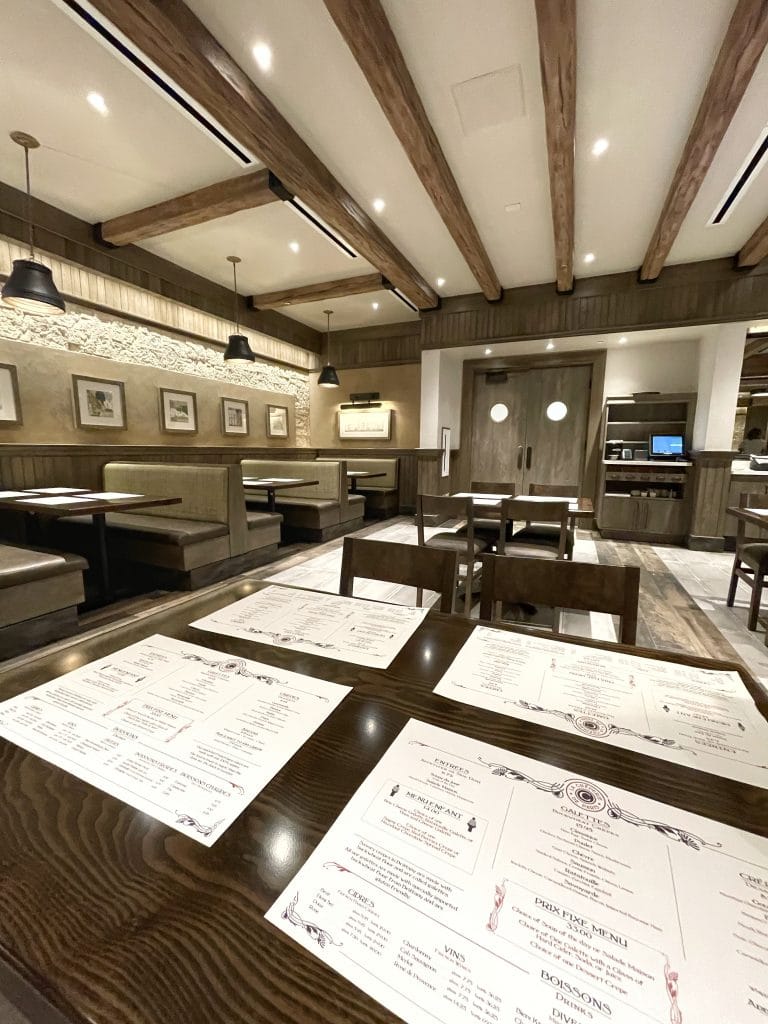 The Salade Maison is mixed greens, tomatoes, onions and a vinaigrette. The vinaigrette has been confirmed vegan by the chefs, you just need to ask for no croutons as they do contain dairy. 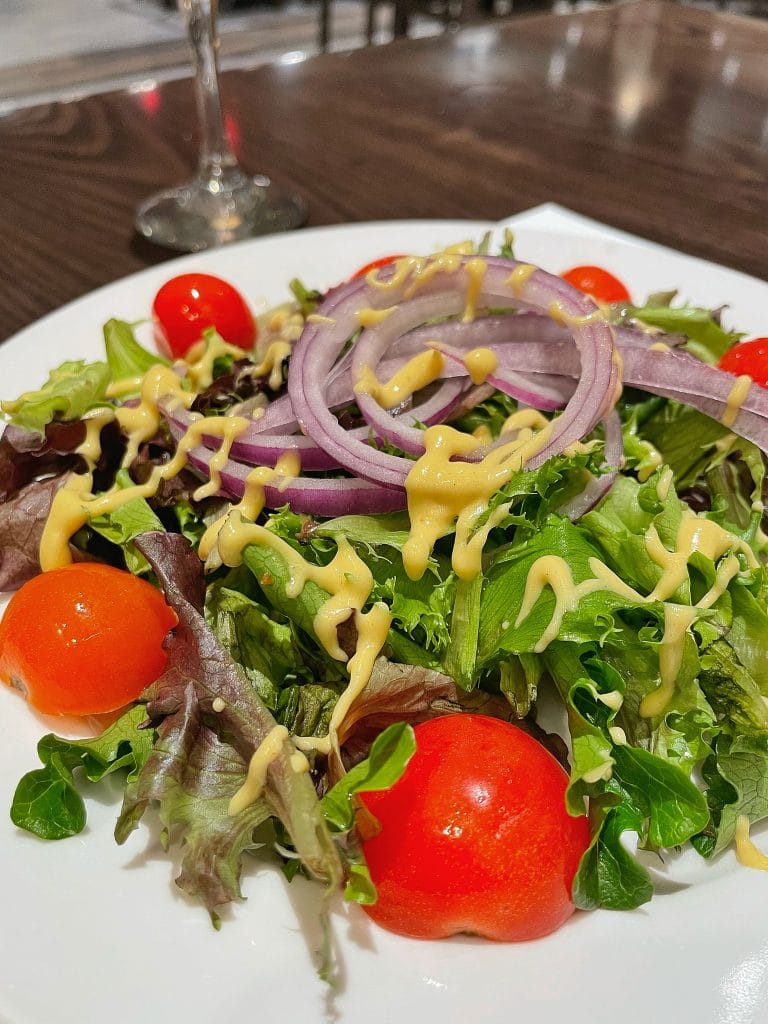 The Soup du Jour will most likely not ever be vegan based on what chefs are telling us, as we expected. 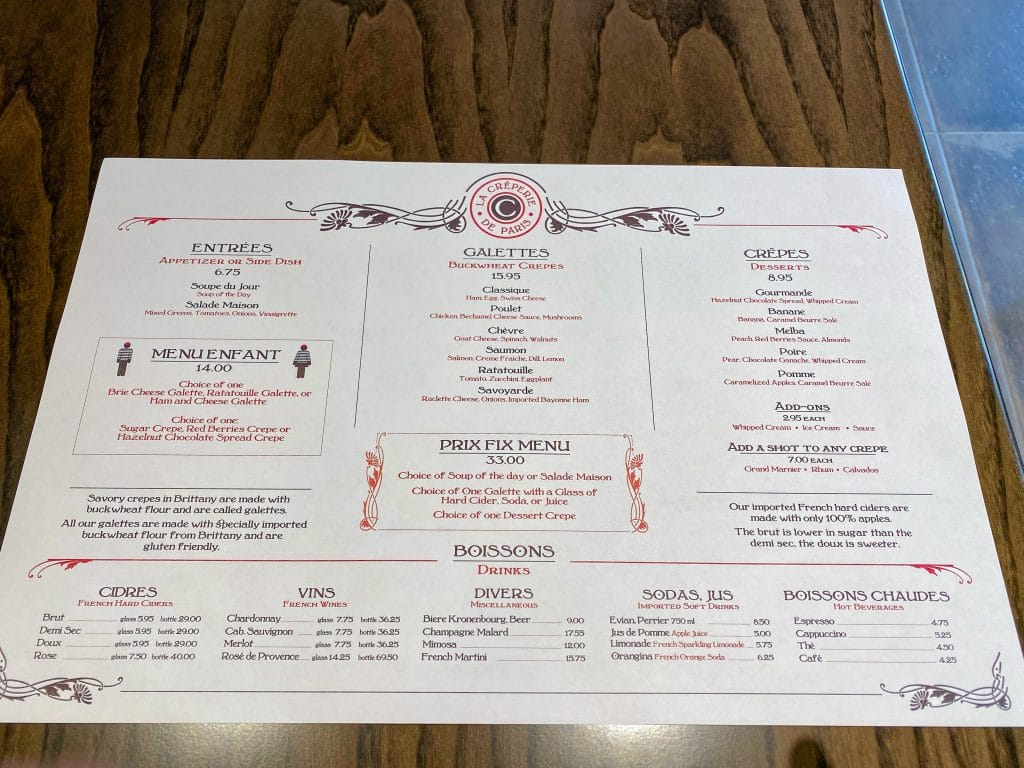 The Ratatouille Galette is completely vegan as is:

Here’s a look at the interior of La Creperie de Paris in EPCOT. Very modern and neutral in color:

We were told we could make several modifications and have even more options at the table service Creperie de Paris. Keep in mind these are modifying the original recipes and may not be the most exciting or fulfilling flavor combinations, but if you’d like to try them, they are vegan if you make these changes:

You can make a “wrap” of the buckwheat galette and add the mushrooms or the spinach from the two savory crepes that have that filling. Without anything else in there, it would be pretty plain, but it is possible.

The dessert crepes have some options when you make them with the buckwheat crepe vs. the sweet crepe.

Our reporter tried the Melba out so we could see what that would look like. He said it was very fruity and flavorful and the buckwheat crepe was not a bad combination with the fruit, even though it normally is made with a sweet crepe. The fruit flavors balanced out the buckwheat and made it delicious. 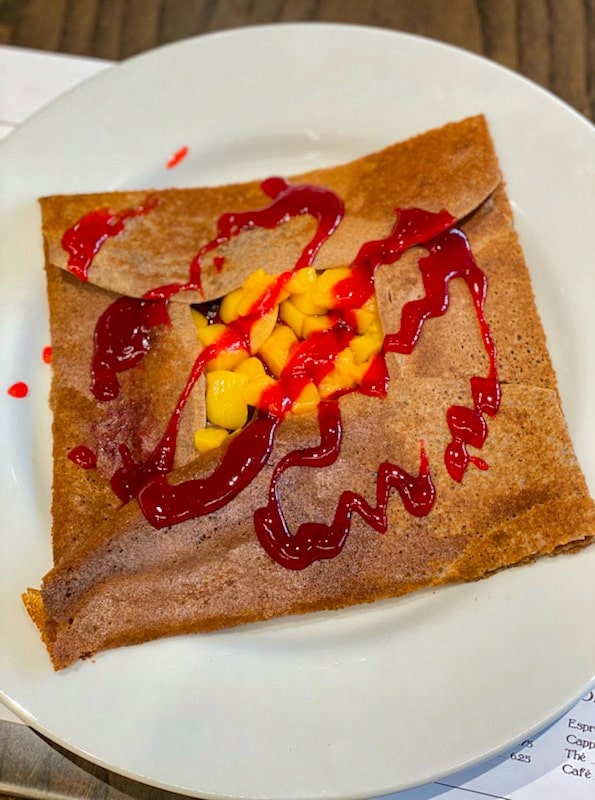 I recently tried the dessert crepe, and was pretty disappointed. It looked completely different from the one in the photos above, and the peaches now seem to be mixed in with the red berries, and have the drizzle on top. The acidic fruit does not pair well with the buckwheat galette. I love the buckwheat with the ratatouille, but with the fruit, it’s a miss. Not sure why they can’t add some sugar to it, or maybe some on top, but maybe it wouldn’t make a difference. 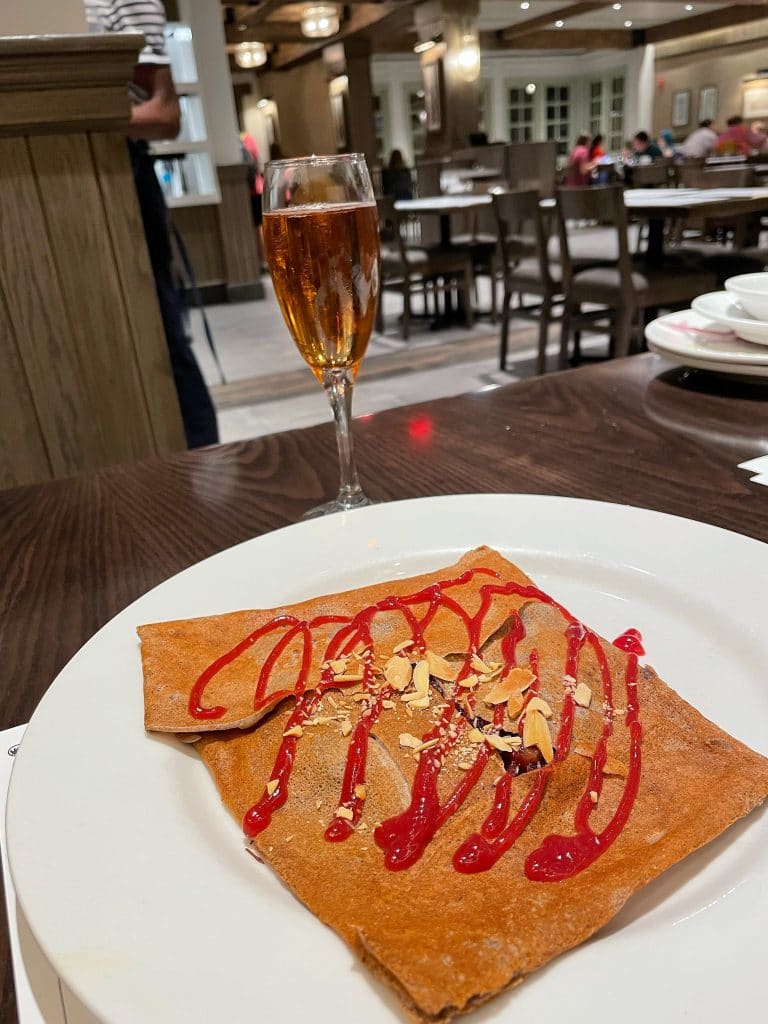 I appreciate the effort to make something vegan here, and the manager, Grant, has been great every time we’ve spoken to him and asked a million questions about ingredients. 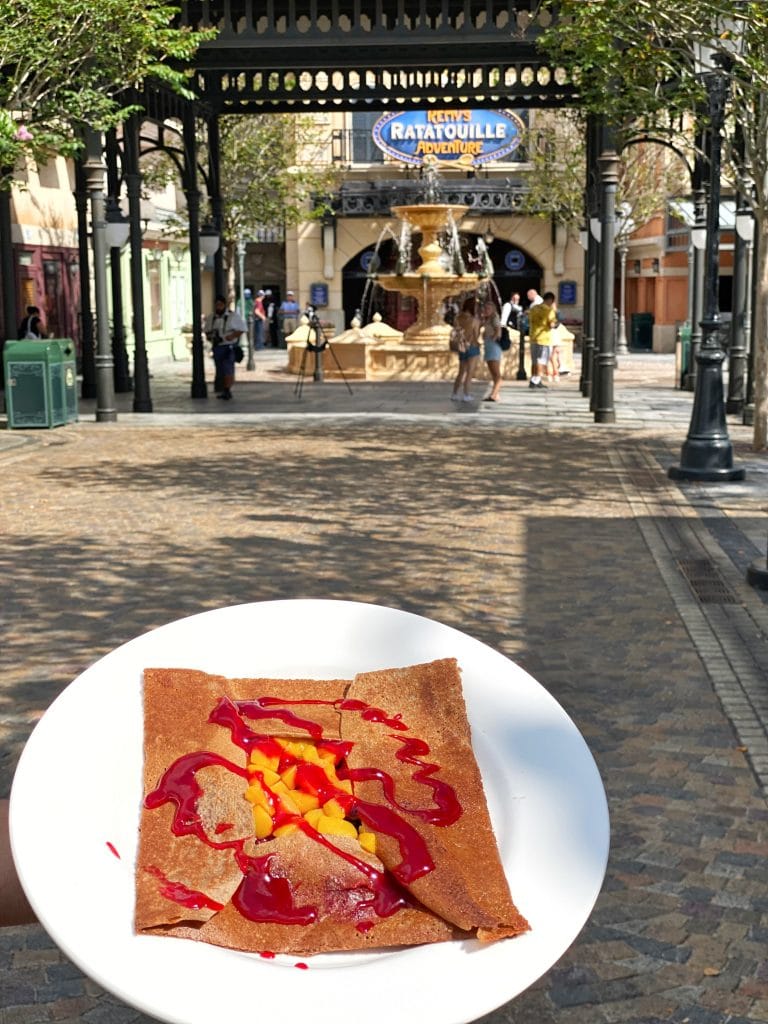 So there you have it, the new La Creperie de Paris in EPCOT’s France pavilion which opened on October 1, 2021 and all of its vegan crepe options. Below is our vegan review of the prix fixe menu – be sure to like and subscribe for more Vegan Disney Food video reviews! A bientôt and bon appétit!