Sunshine Seasons in EPCOT at the Land pavilion

Sunshine Seasons is one of my earliest EPCOT memories from 1983, and now almost *gulp* 40 years later, I’m reporting on a vegan Mediterranean Vegetable Sandwich. Who would’ve guessed?! I remember the smell of bbq in there reminding me of the Rome burning section of Spaceship Earth. Of course that was in the mid-80’s and Sunshine Seasons has seen many menu changes since then. This spot has had the distinction of being the home to one of the most beloved and the most hated vegan options in all of Walt Disney World. Almost everyone I’ve spoken to or messaged with online loves the Vegetable Korma option here. Similarly, almost everyone commented their disgust at the (no longer available) Jackfruit Gyro from Sunshine Seasons. This Mediterranean Vegetable Sandwich will probably lie somewhere in the middle. 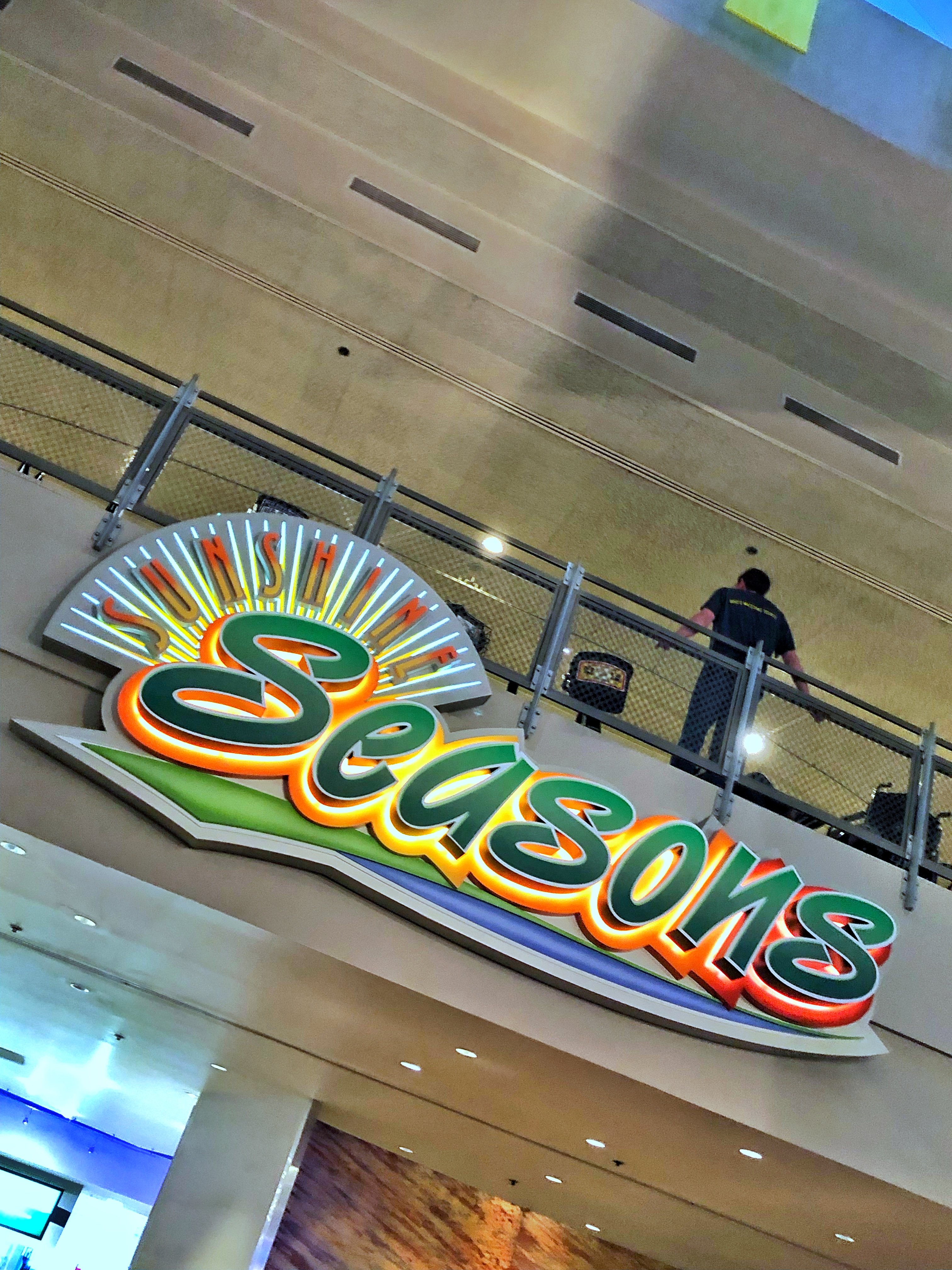 Walt Disney World recently announced some summer menu updates, and there were a couple of vegan updates, including the new Spinach and Artichoke Dip at the Sci-Fi Dine-In Theater Restaurant. The other was this new vegan Mediterranean Vegetable Sandwich at Sunshine Seasons. So we headed over to check it out and see if it was worth your hard-earned $9.99 over the Vegetable Korma, or if you should skip it entirely. Let me say, I had high hopes. Had. 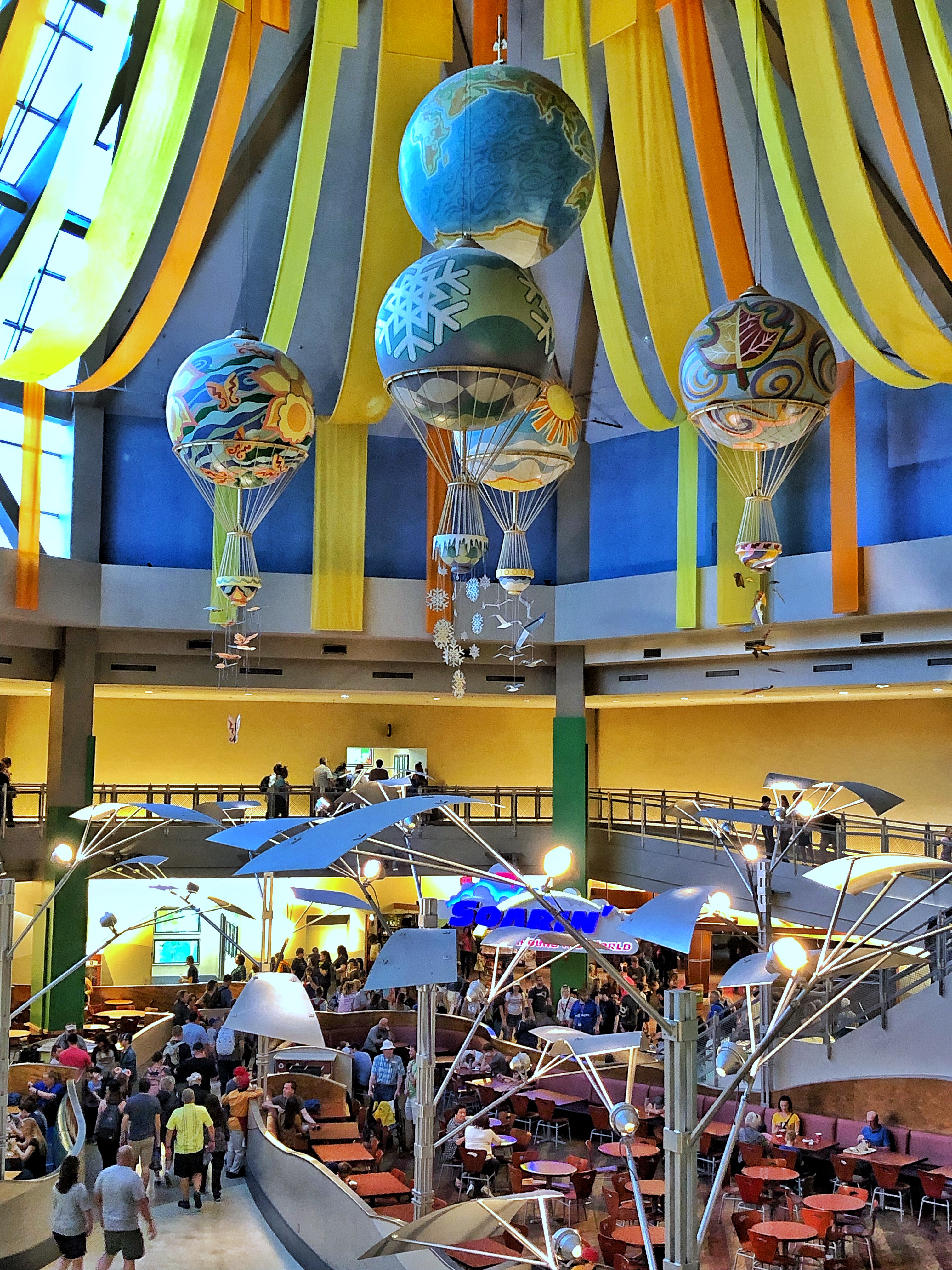 The Mediterranean Vegetable Sandwich is described in the My Disney Experience app menu as having roasted red pepper, red onion, tomato, arugula, hummus and balsamic vinaigrette on herbed focaccia, served with potato chips, for $9.99. Our sandwich was served on a Kaiser roll, just like the Roast Beef Sandwich that was also just added to the menu. Sadly, the bread is pretty tasteless and the filling doesn’t make it much better. 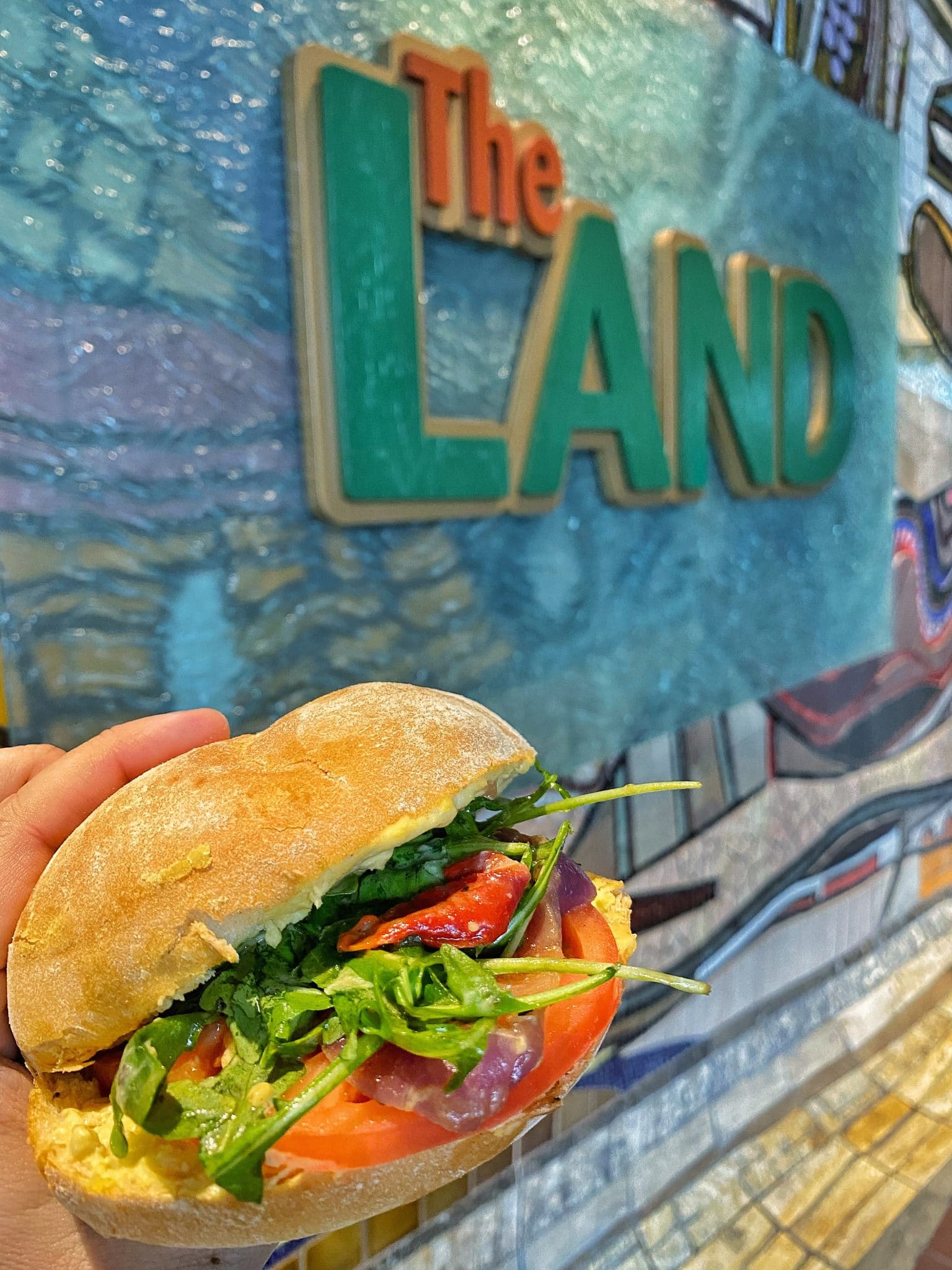 The veggie sandwiches at Yacht & Beach Club (which have now sadly been discontinued as of a couple months ago, replaced by a Caprese only) were always a great grab and go option. When it was discontinued, it moved over to the Boardwalk Bakery, which will be closing soon, so again will be lost. That particular veggie sandwich was always great and full of flavor. This one at Sunshine Seasons, not so much. I really feel like the bread is just the wrong choice here. I’m not sure if they are nixing the focaccia permanently or if they were just out when we ordered, but the Kaiser roll is so bland and the vegetables and hummus just don’t add enough. 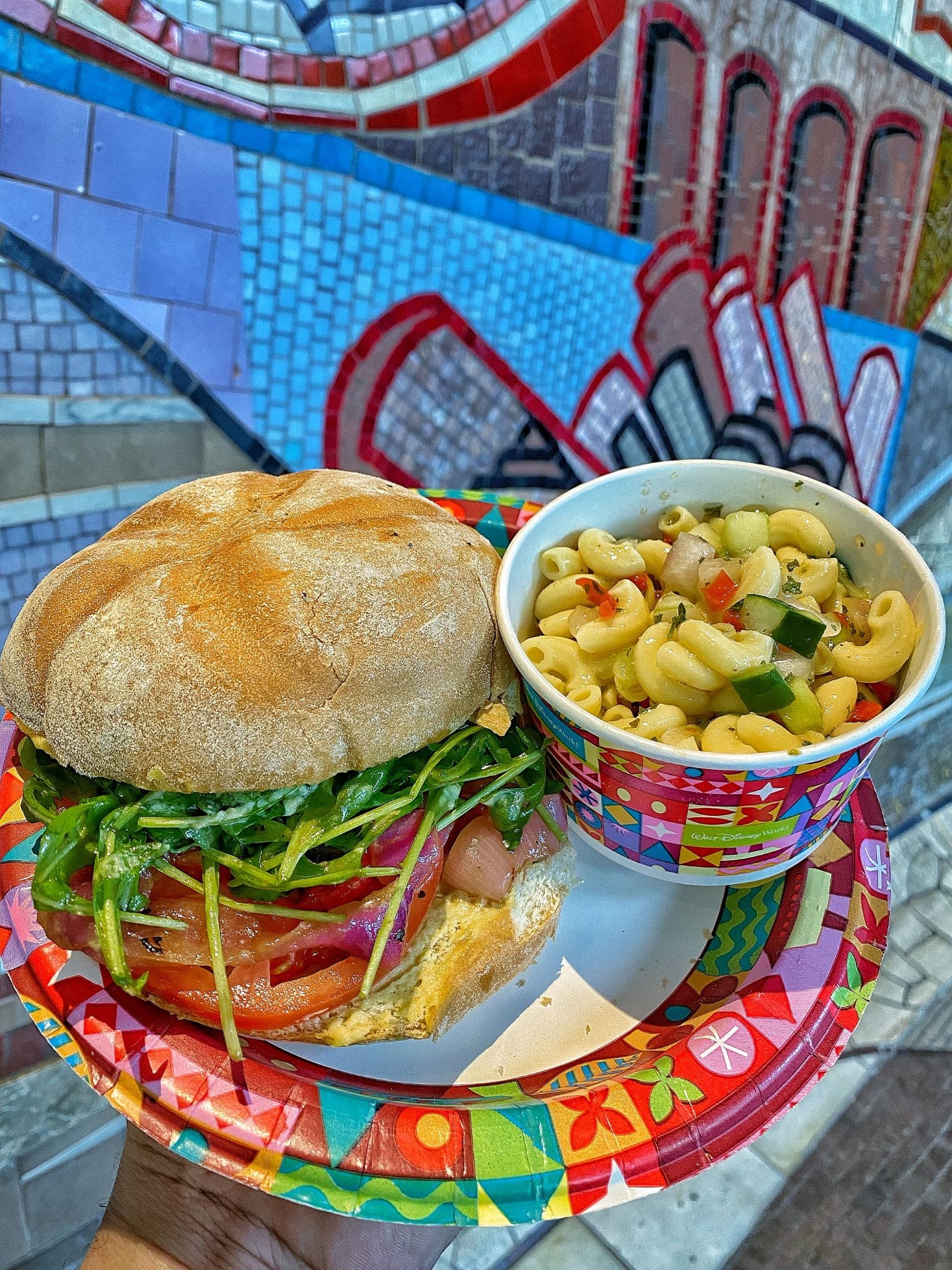 Basically, you get two slices of tomato, some red onion, and maybe one or two red peppers, along with the arugula. That’s not really a great mix in my opinion. If the bread had more flavor, I might recommend it. The Kaiser roll is just not the right choice. Nor is just tomatoes. Give us some zucchini, summer squash, or a Portobello mushroom, anything more hearty.

You do have the option for a vegan pasta salad as your side instead of grabbing a bag of chips, so that’s a positive. The pasta salad was pretty good, but nothing spectacular. We checked and the pasta is completely vegan as-is. It is not gluten-free. You can request a vegan tapioca roll for the bun on this sandwich to make it gluten-free. 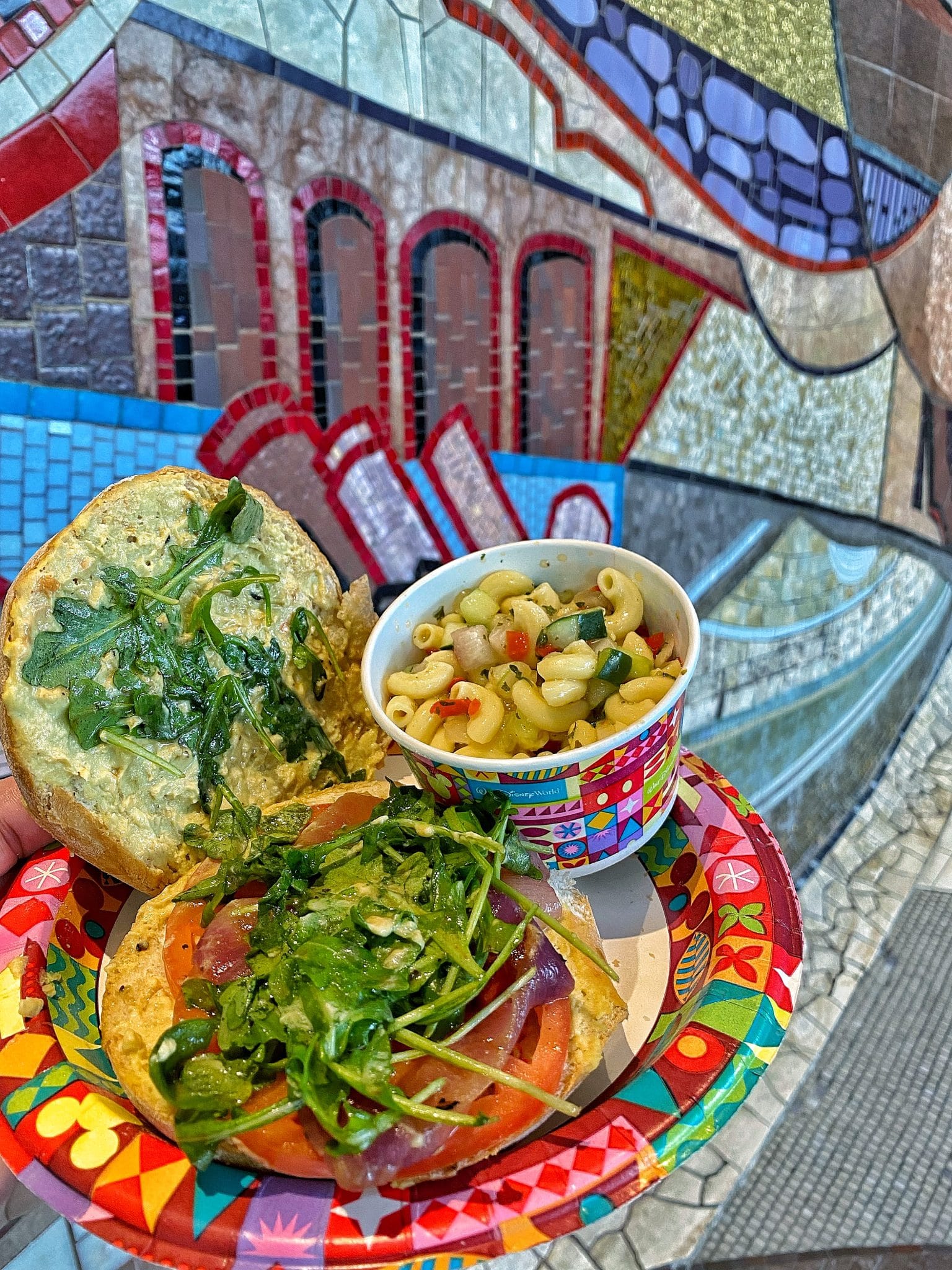 Previously at Sunshine Seasons (a few years back), you could get an Oak Grilled Vegetable Flat Bread. That featured eggplant, zucchini, red peppers, and hummus and we just had to remove the cheese. That was still pretty bland, but not as bad as this.

Hopefully Disney sees this feedback or hears from guests and makes some updates to this new sandwich because as-is, it is not worth even half of the $9.99 they are charging. We did check on the other items on the Sunshine Seasons menu we thought might be modifiable, and sadly they really aren’t. 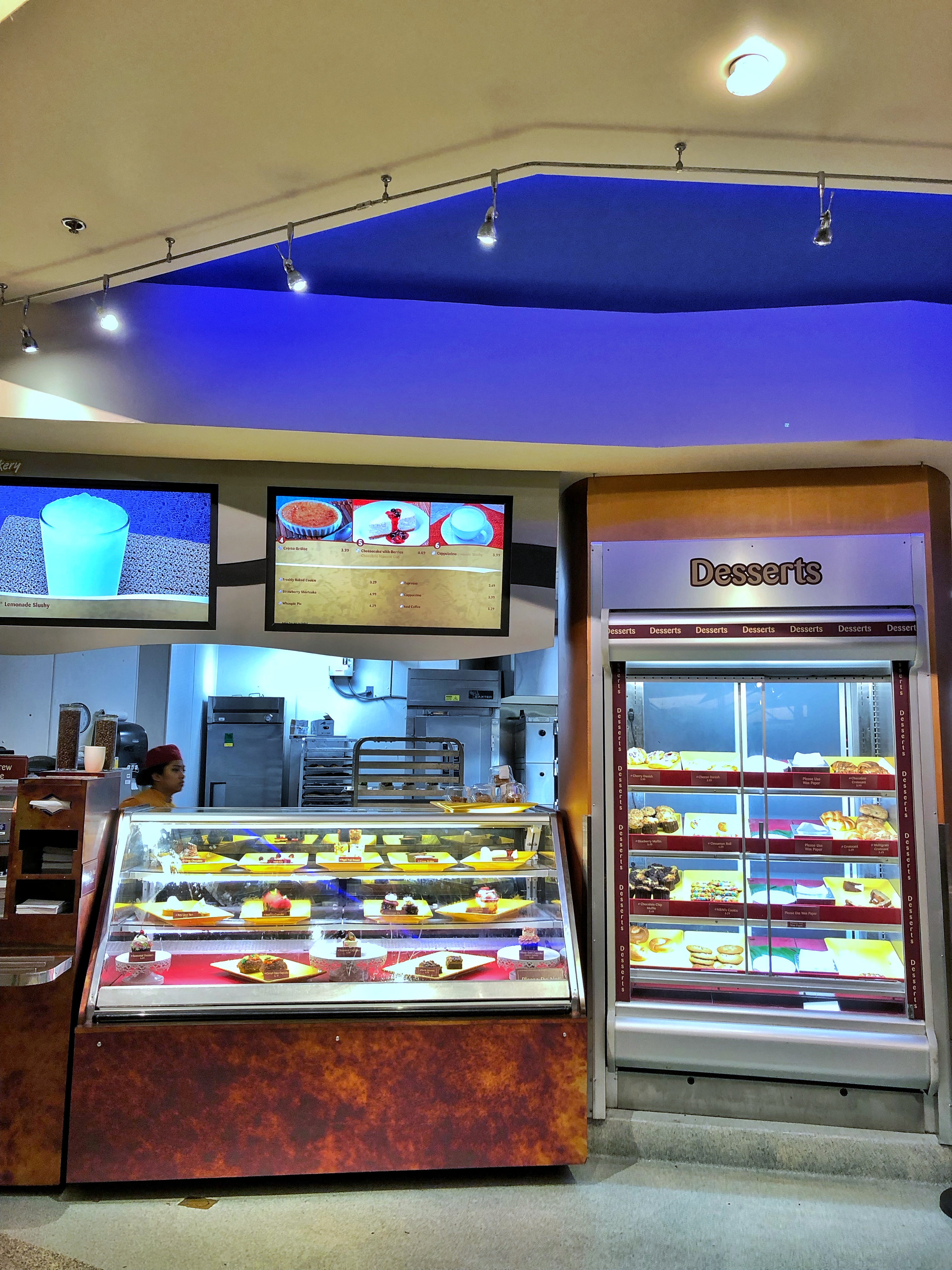 The Asian Noodle salad is made with fish sauce, and the Power Salad could be modified by removing the goat cheese and changing the dressing, however it’s a grab and go item and only available to be modified during lunch which ends at 4pm, so if you visit after that, you’re out of luck and the vegan Mediterranean Vegetable Sandwich or the Vegetable Korma are your only options.

My recommendation is to spend your money at the EPCOT Flower & Garden Festival, or the upcoming EPCOT Food & Wine Festival, or really anywhere else in EPCOT to get an enjoyable vegan option.

Of course, you can always grab one of our favorite desserts or snacks, the plant-based Cookies & Cream Chocolate Mousse Cup, which is still delicious! We tested, just to be sure. 😉 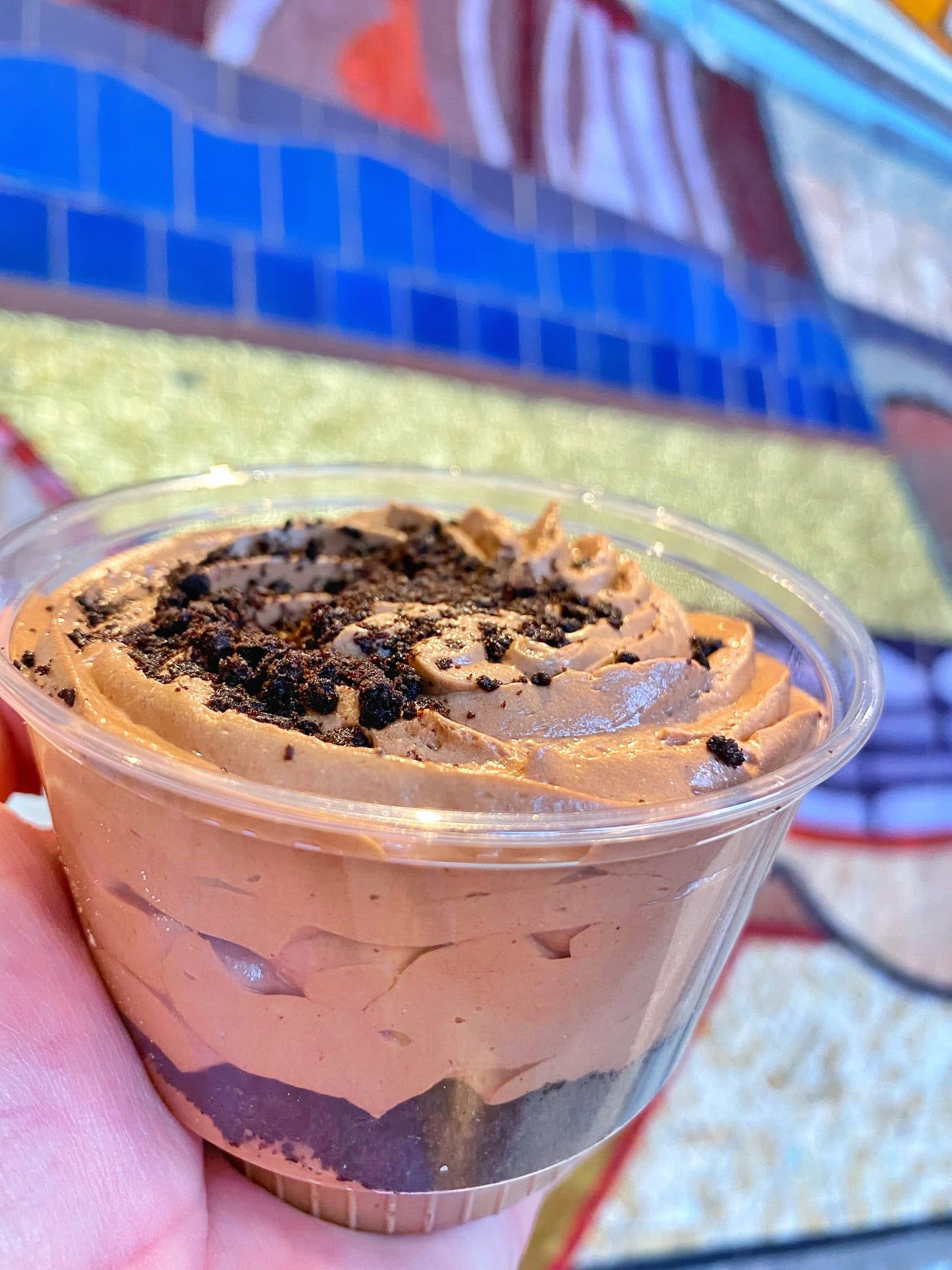