The Magic Kingdom’s After Hours hard-ticket event gets a makeover featuring your favorite Disney villains. Walt Disney World hosted us at the “Disney Villains After Hours” party this week and here’s the scoop on everything you can see, do and of course…for our fellow vegan foodies …EAT! 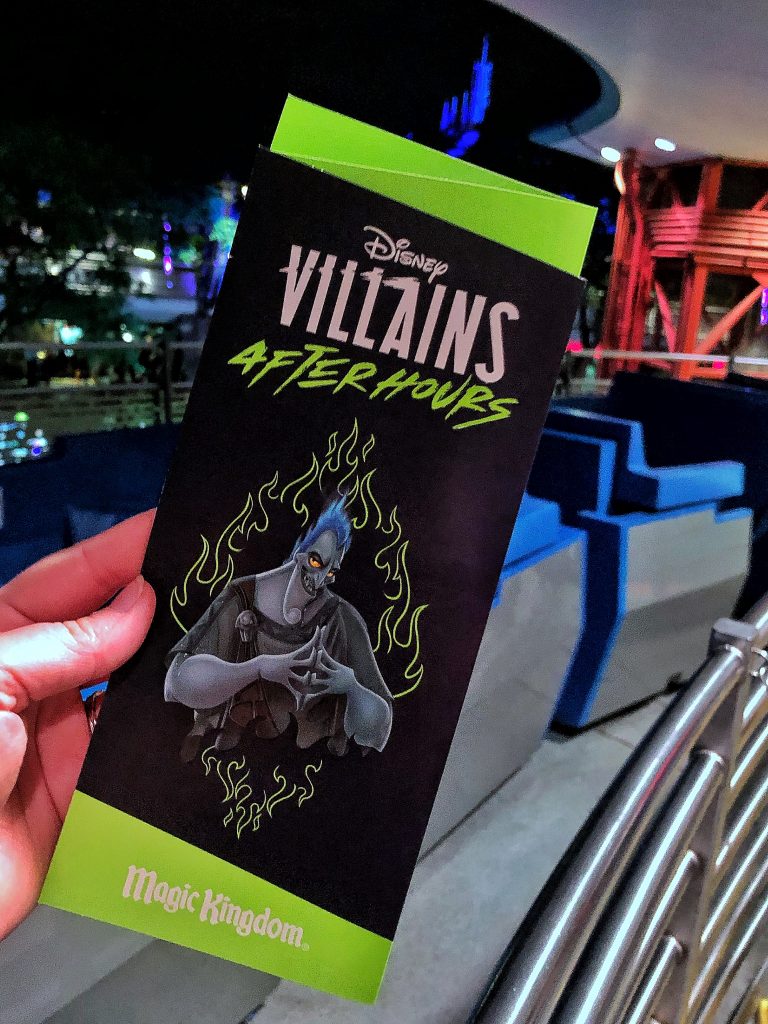 For those of you not familiar with “Villains After Hours”, it’s a special ticketed event which gives attendees access to twenty four of the Magic Kingdom’s most popular attractions for three hours after the park closes to day guests.

In addition to the attractions, the party also carries with it specialty food, merchandise, entertainment and PhotoPass opportunities.

Because this is “Vegan Disney Food”, let’s start with specialty vegan food options shall we?

This is the second year the Magic Kingdom has held the Disney Villains After Hours event, the party debuted in the Summer of 2019.

In its inaugural year, there were several “event exclusive” food and beverage options that were vegan friendly.

Our favorite bite of 2019 were the Intergalactic Noodles from Cool Ship in Tomorrowland featuring purple noodles mixed with water chestnuts, red onion, red bell peppers, and chives in a sweet chili garlic sauce.

This offering is sadly no longer available. 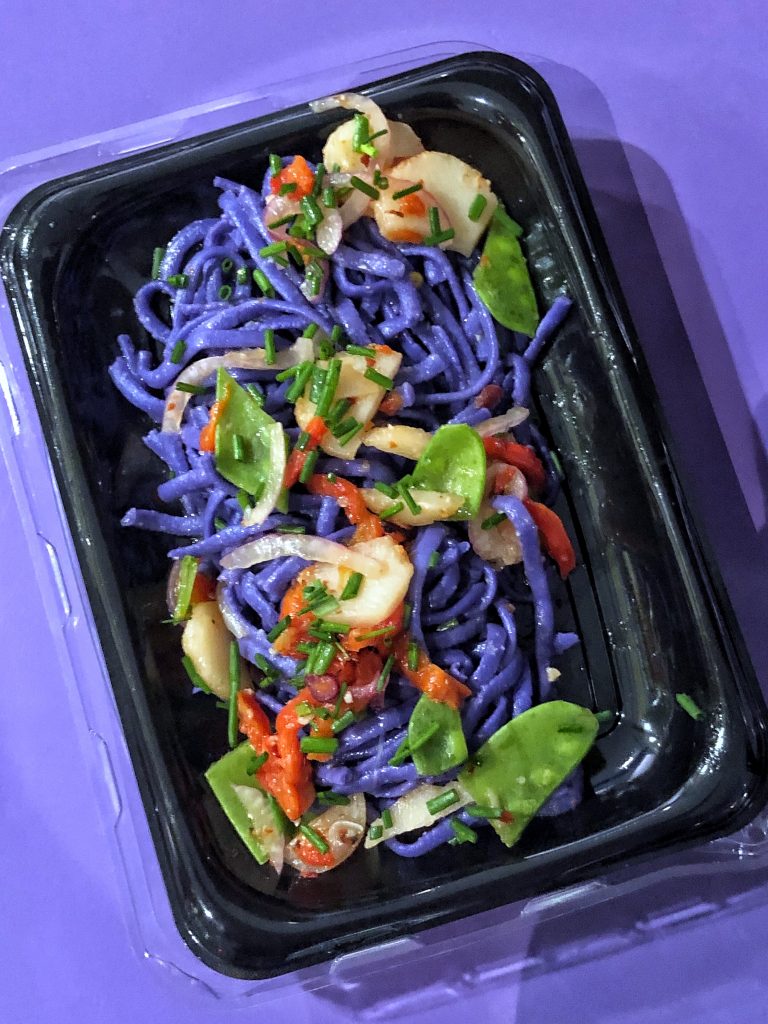 In 2020 there are no vegan friendly “event exclusive” food options. Nada. Zero. Zilch. There isn’t even anything you can modify.

The only specialty event items that are vegan friendly are beverages. And there are three of them. One is vegan as-is and the other two need modifying. Each one takes its inspiration from a Disney villain.

We’ll start with the vegan as-is offering. That would be the Voodoo Magic ($5.99) which is inspired by Dr. Facilier from Disney’s Princess and the Frog. You can find it at Sleepy Hollow in Liberty Square.

This beverage is a mix of Lemonade and Green Apple Syrup garnished with a rock candy straw. 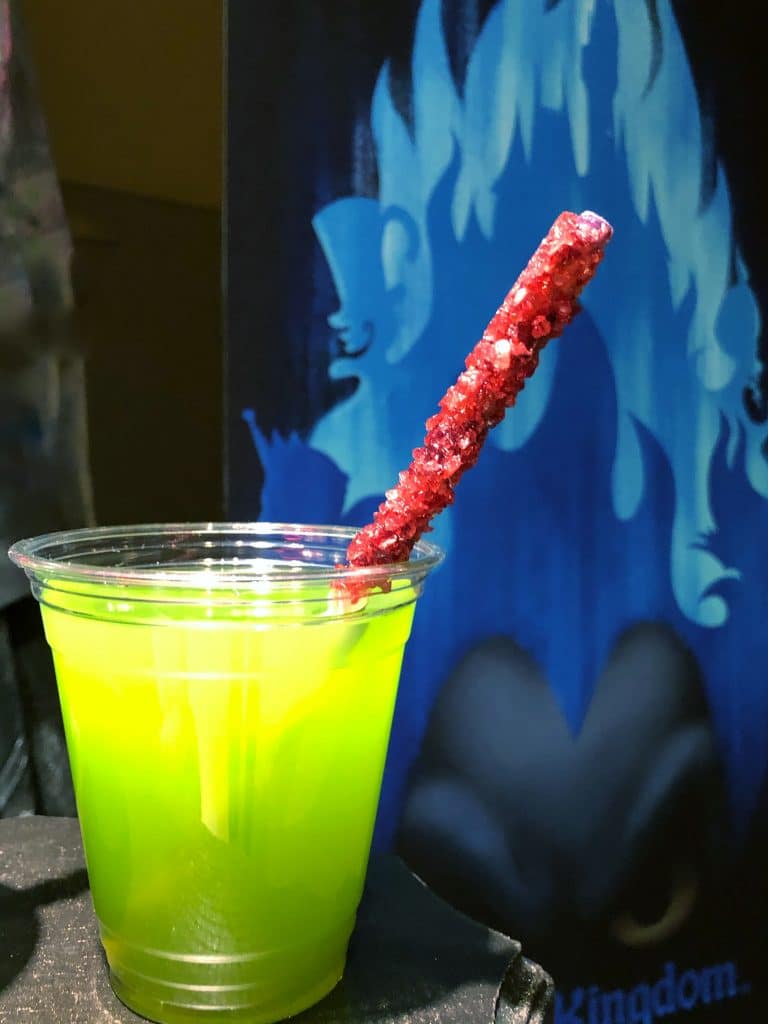 The second beverage needs to be modified.

Here we have the Hearts on Fire ($4.99) inspired by the Queen of Hearts from Alice in Wonderland. This can be purchased at the Cheshire Cafe in Fantasyland adjacent to the Mad Tea Party attraction.

You’ll get a blend of fruit punch and Coke with a fresh strawberry garnish. Ask to omit the pop rock candy to make the drink vegan as the popping candy contains dairy. 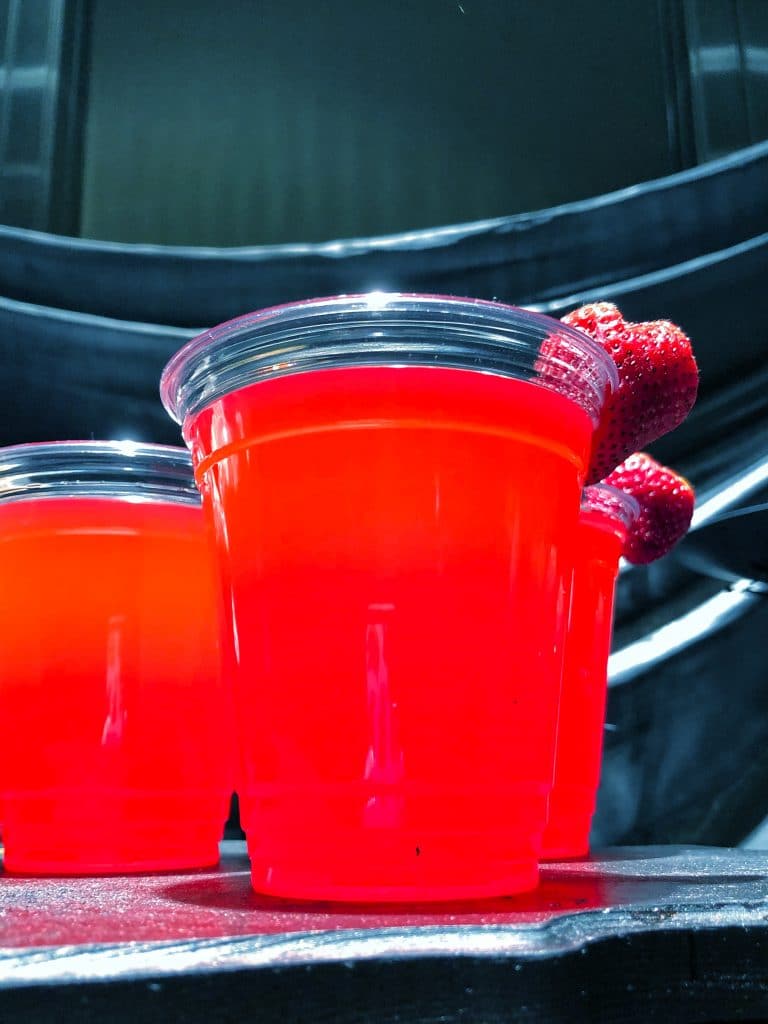 The third and final beverage also needs to be modified. You can find it at Casey’s Corner on Main Street USA.

Go for the Hades Temptation ($5.99). It’s a frozen mocktail which draws inspo from, of course, Hades from Disney’s Hercules.

This one is served in a fluted glass and is a frozen concoction of lemonade and violet syrup.

It’s basically the iconic Violet Lemonade from the Epcot International Flower & Garden Festival. Except instead of the edible flower garnish, this one has a gummy worm garnish that needs to be omitted. 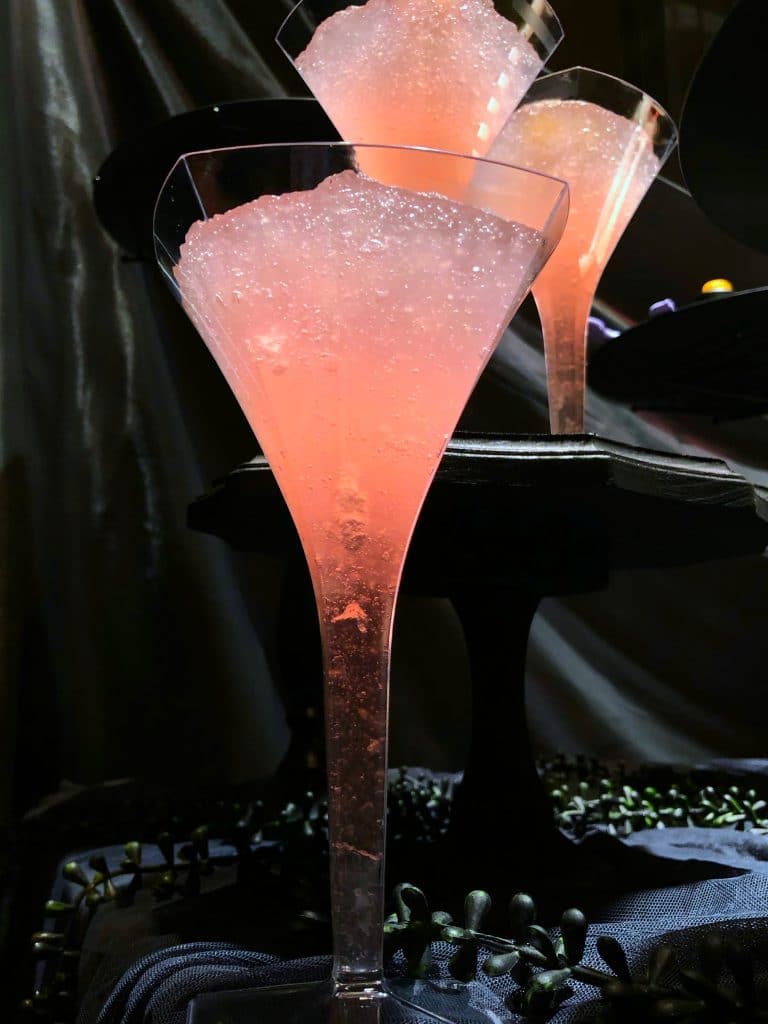 This was the only option we actually tried in person at the event. With a vegan Plant Based Loaded Slaw Dog of course! We were at Casey’s Corner after all and when in the Magic Kingdom…Casey’s is a quick service must. 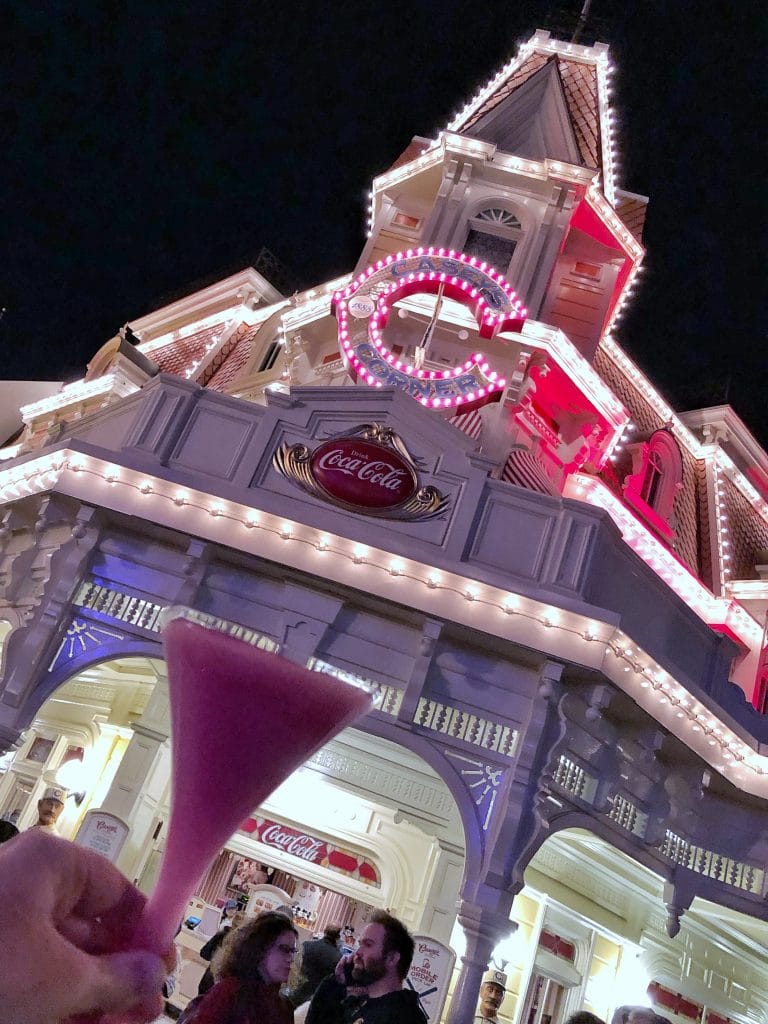 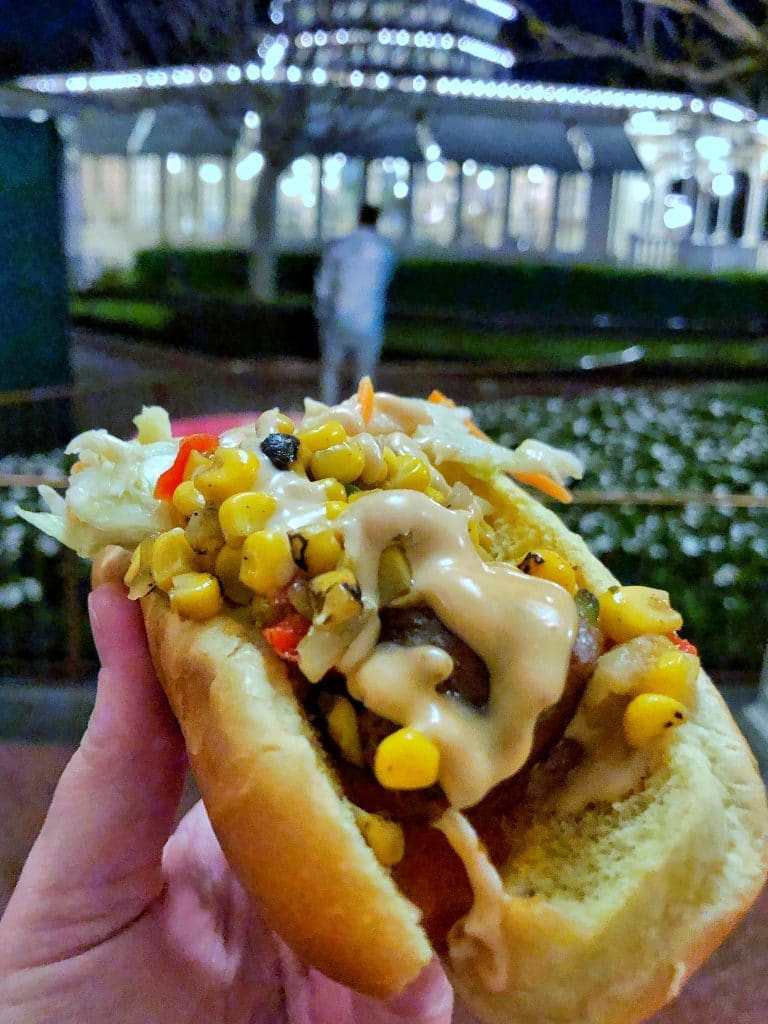 As we mentioned before, the other two vegan specialty options were sweet beverages that we were just too sugared out to try.

All of the above items are of course available at an additional cost.

Vegan “butter” flavored popcorn, frozen fruit bars, soda and bottled water are all included in your Villains After Hours ticket and you can get as much of it as you’d like. 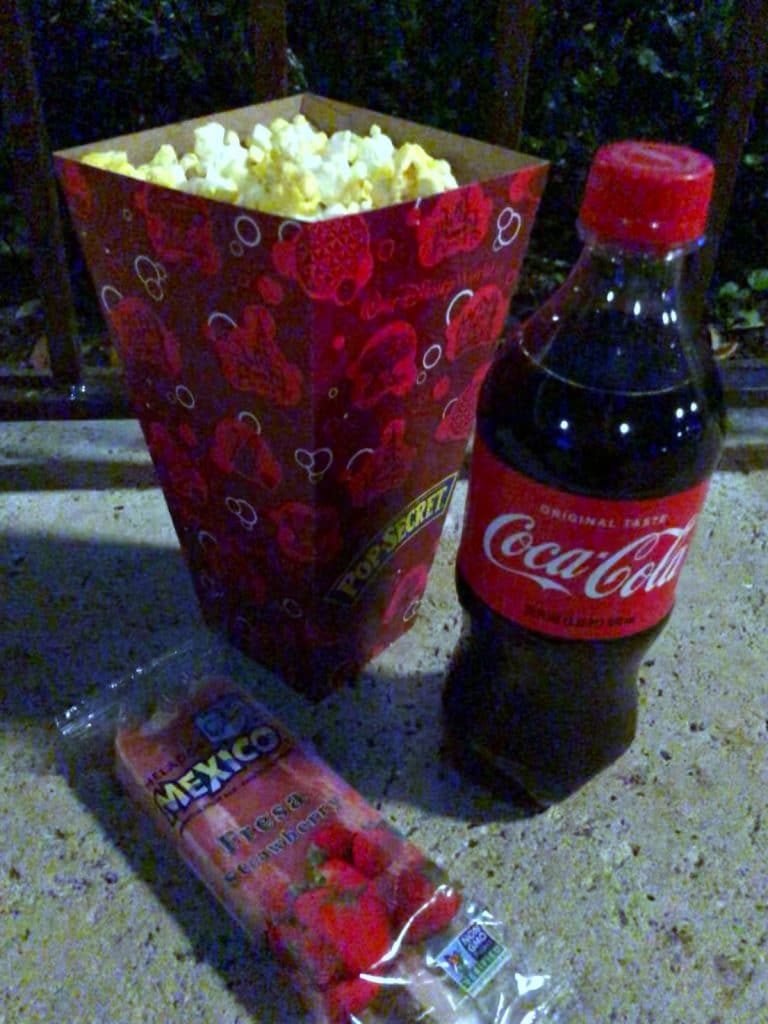 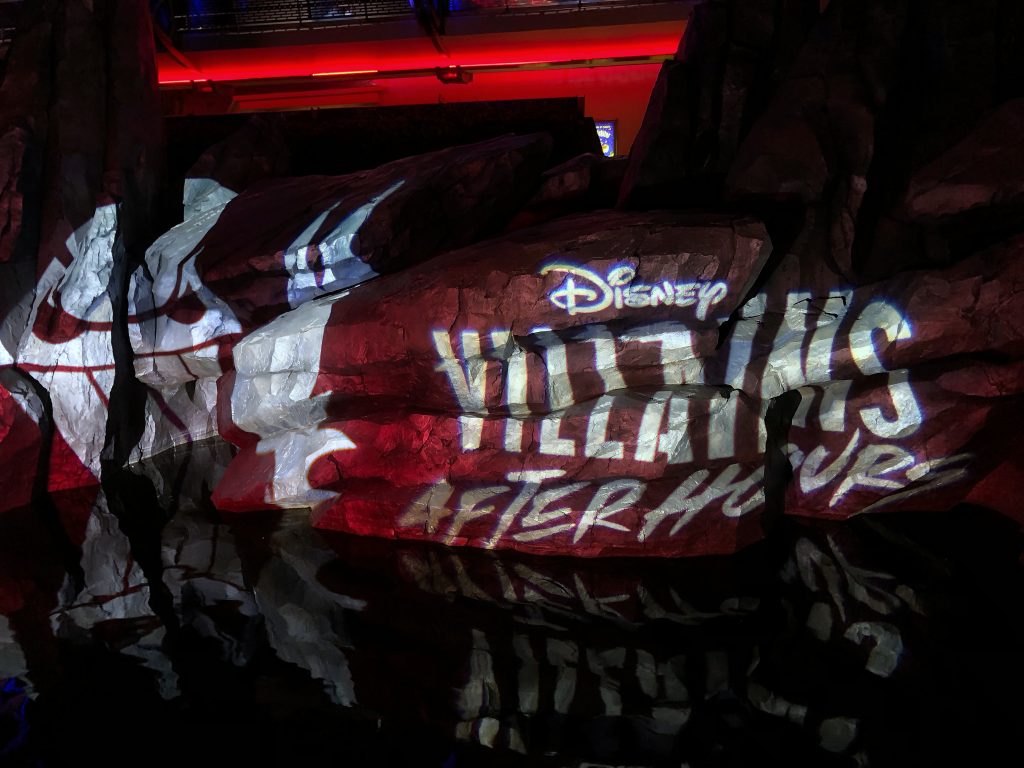 Two things you’re not going to want to miss…

Because there are no actual villain character meet and greets, if you’re wanting to see characters this is one of your chances to do so. 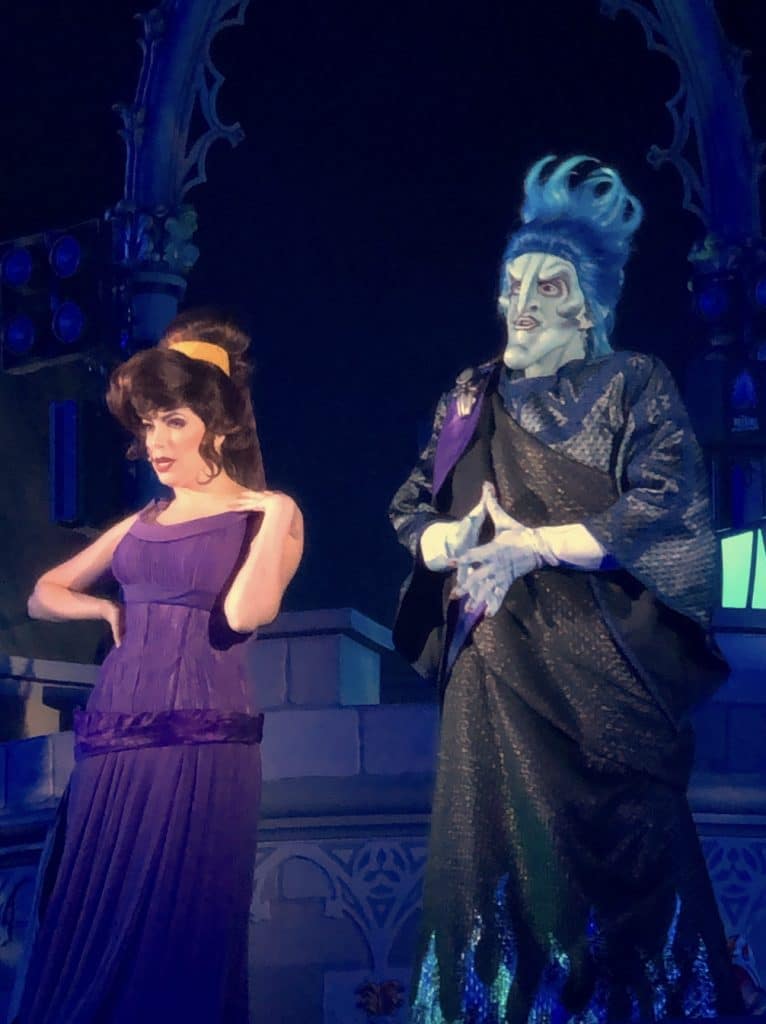 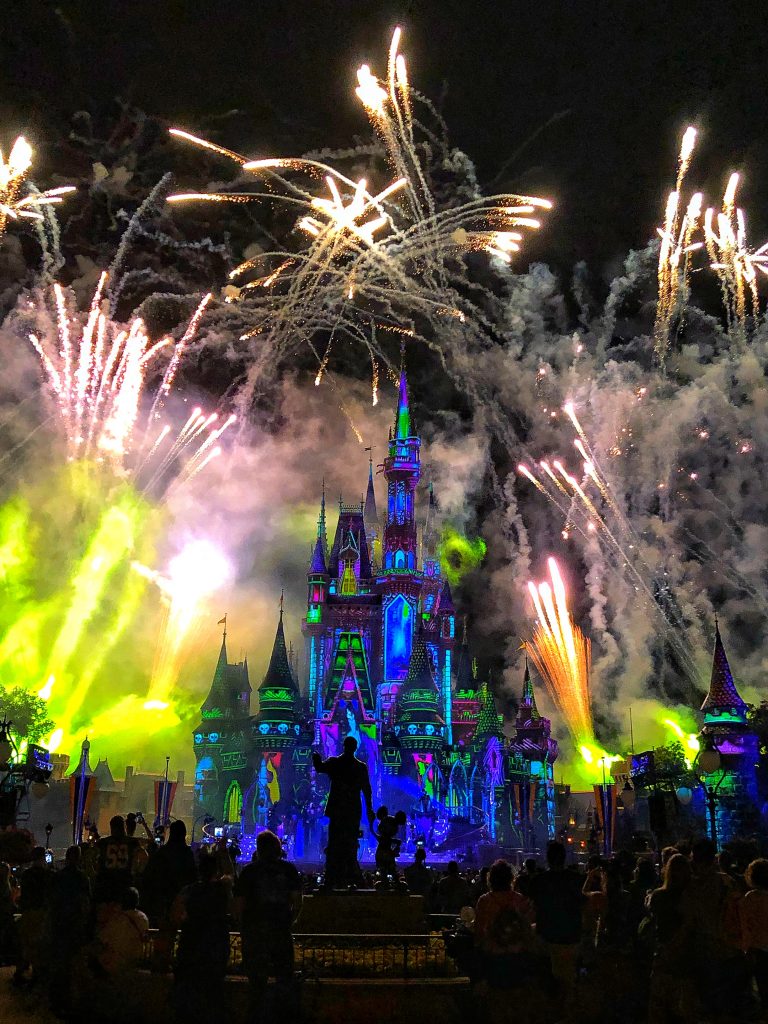 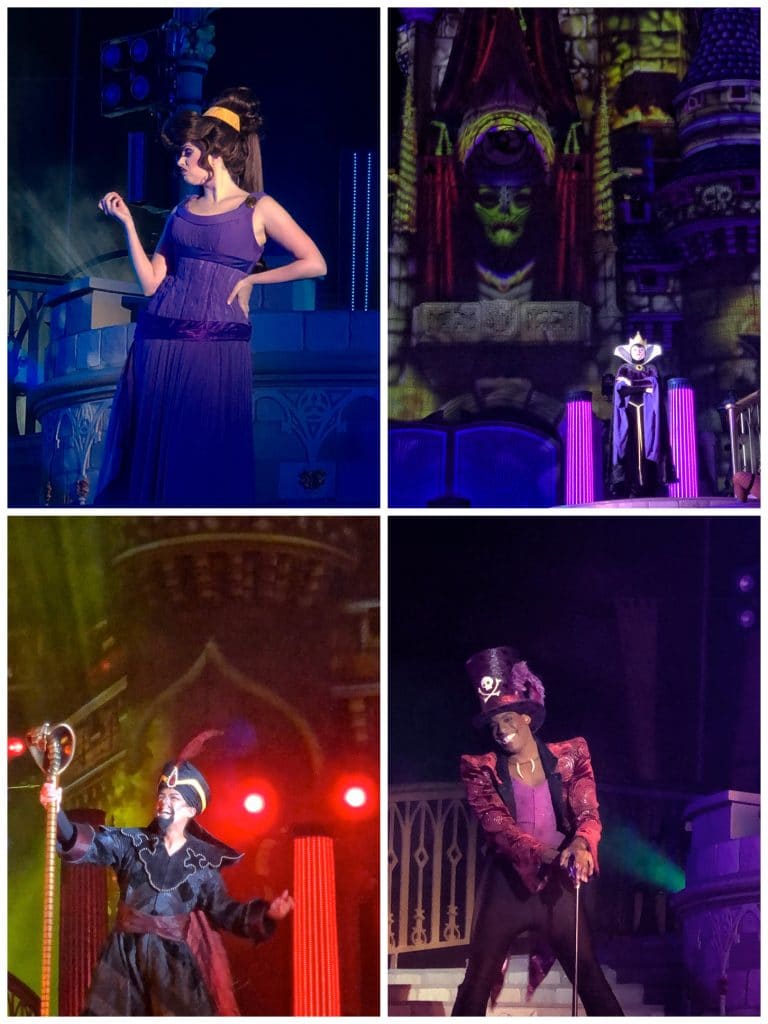 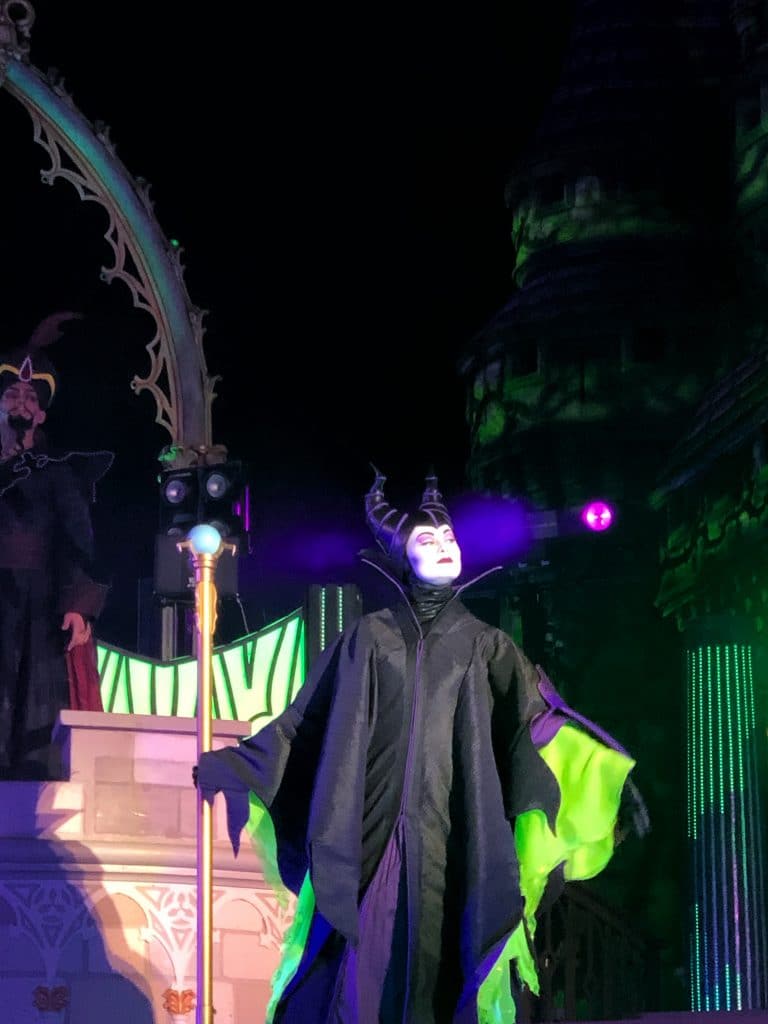 The other spectacle filled with characters is the new Villains’ Cursed Caravan. This parade replaces Maleficent at Night which ran in 2019 and featured the fire breathing Maleficent dragon parade float from the Festival of Fantasy parade.

Maleficent’s dragon is still a part of this new parade in 2020, however she wasn’t breathing fire. 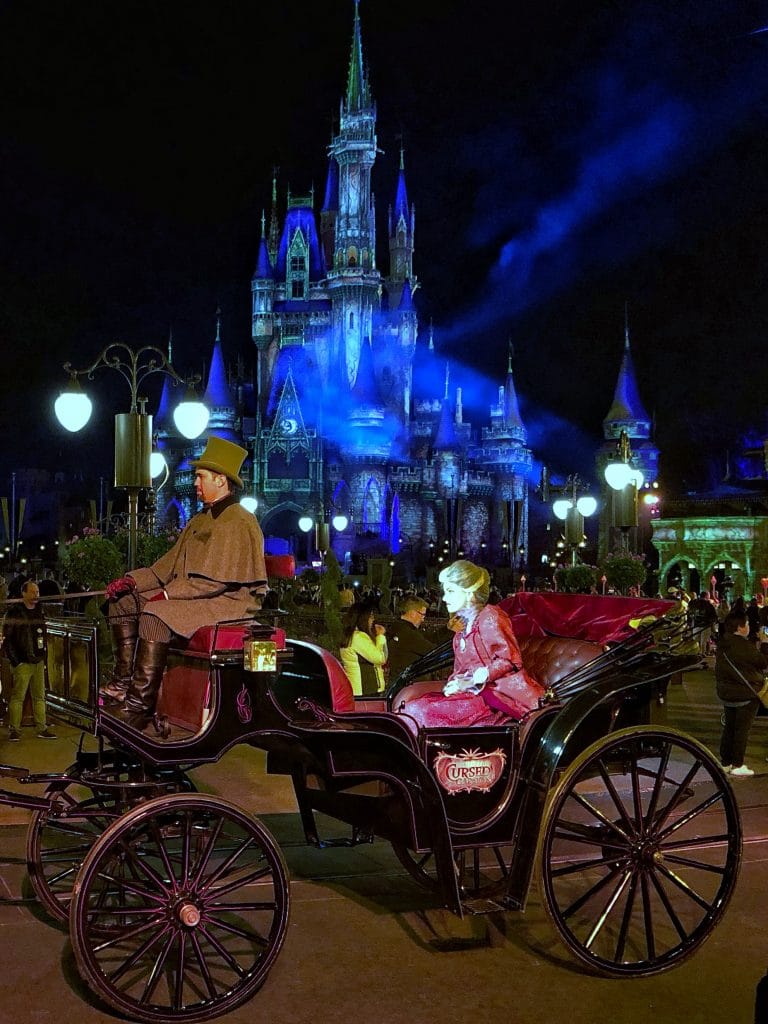 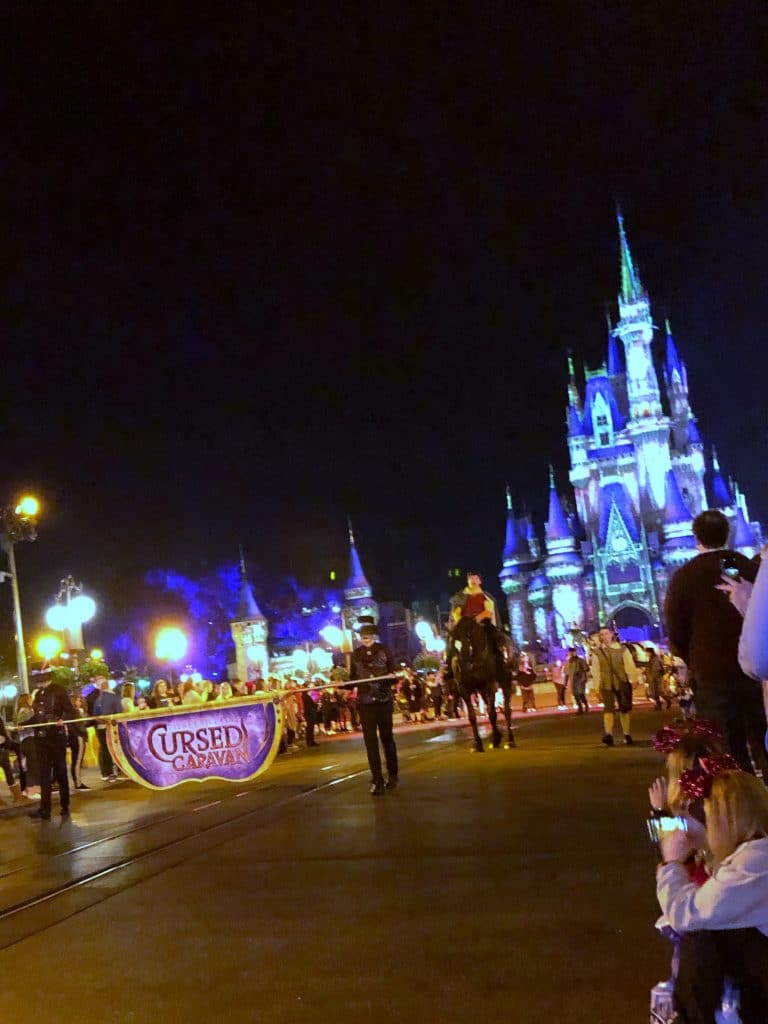 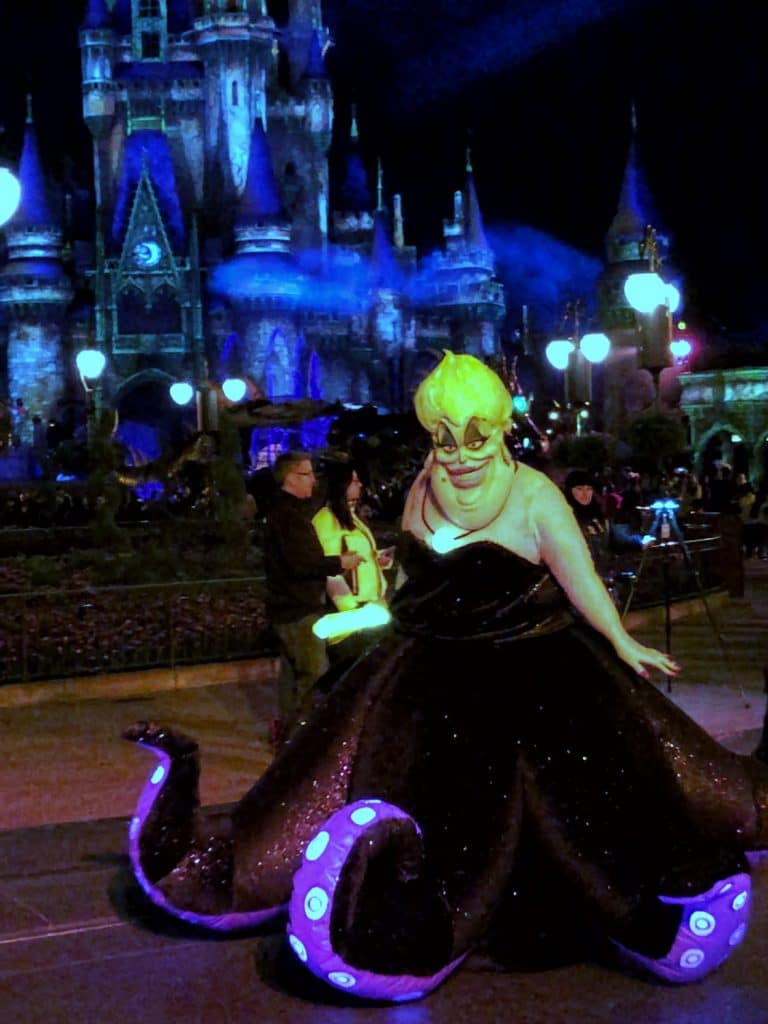 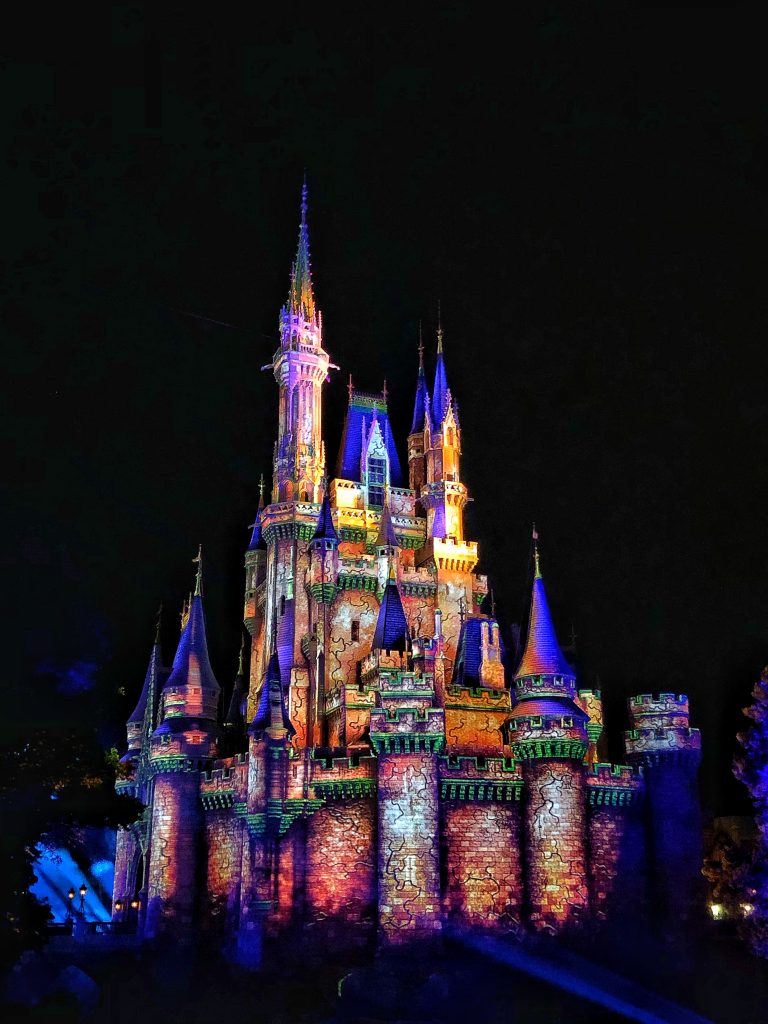 As I mentioned before, there are twenty four Magic Kingdom attractions open during Villains After Hours. those attractions include:

Two attractions get villainous makeovers. Those include Space Mountain which has a special villain music overlay and takes place in complete and total darkness much like the overlay during Mickey’s Not-So-Scary Halloween Party.

The other attraction is Pirates of the Caribbean, where Captain Barbossa invades and interacts with guests. 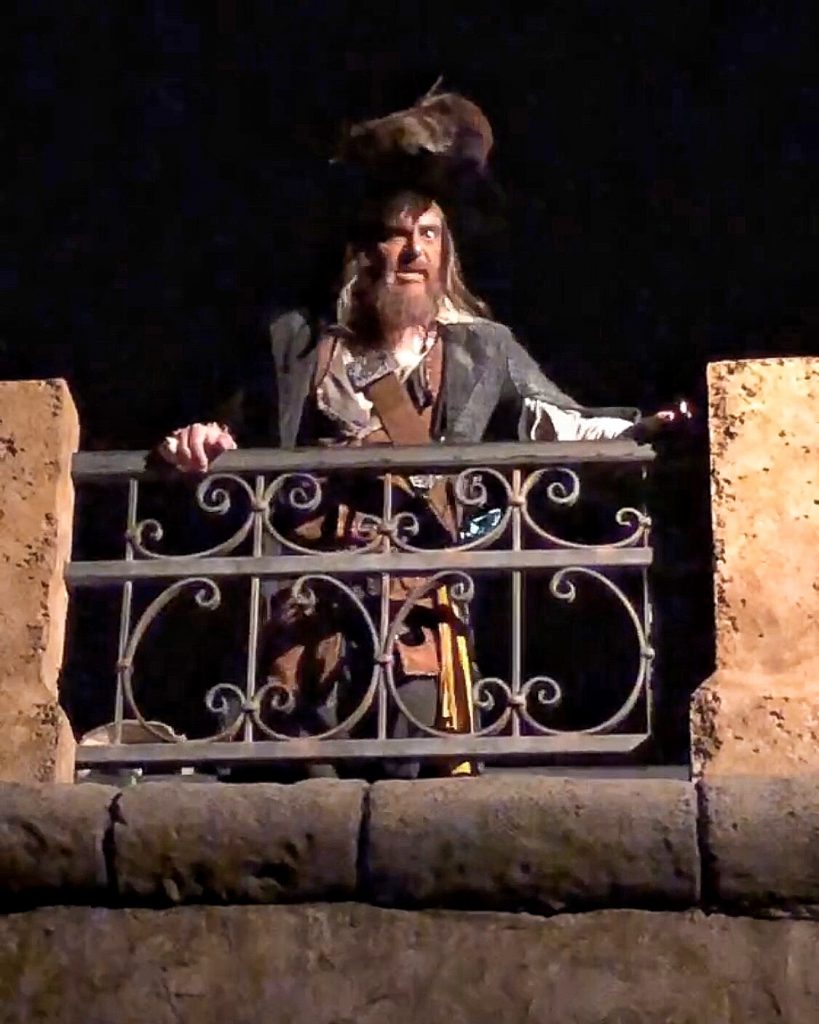 To commemorate this event Disney has released some specialty themed merchandise depicting your favorite villains. Leggings, shirts and a new bomber jacket are among the most popular items.

Look closely at Hades blue flame of hair? Spot anyone in particular? 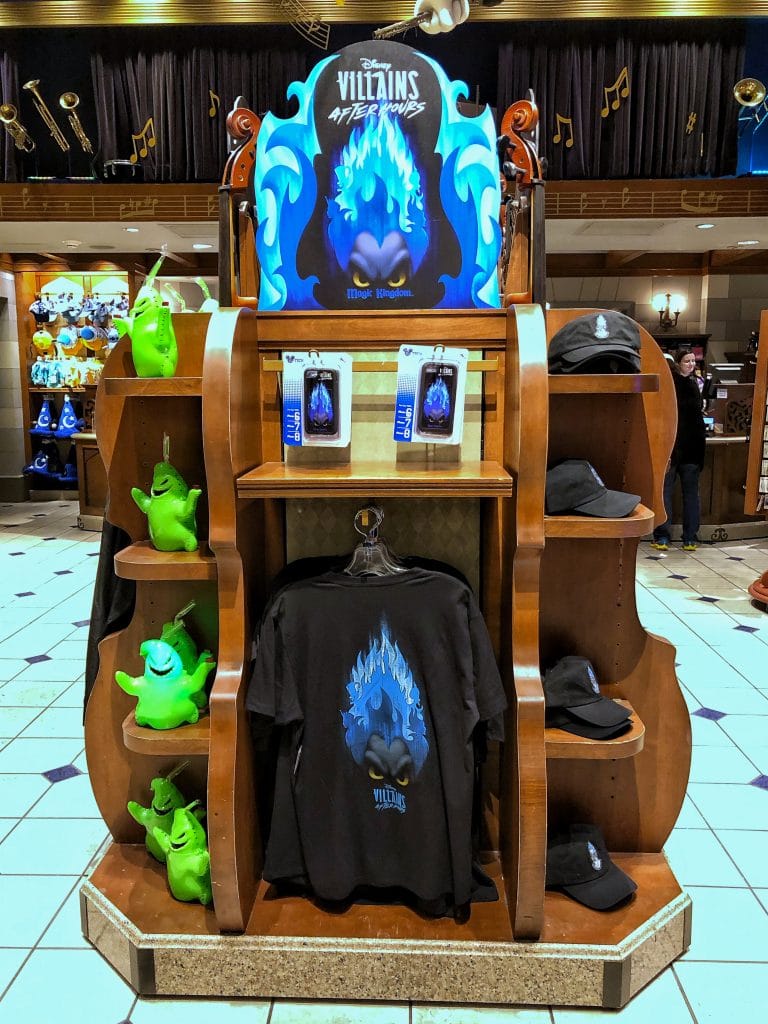 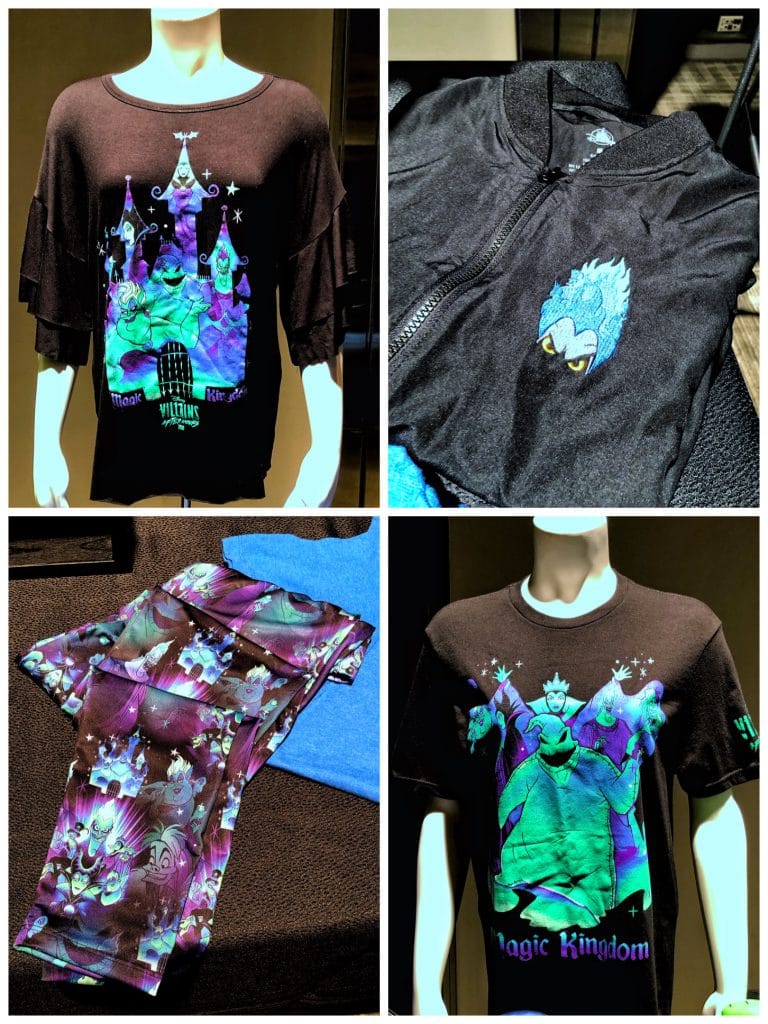 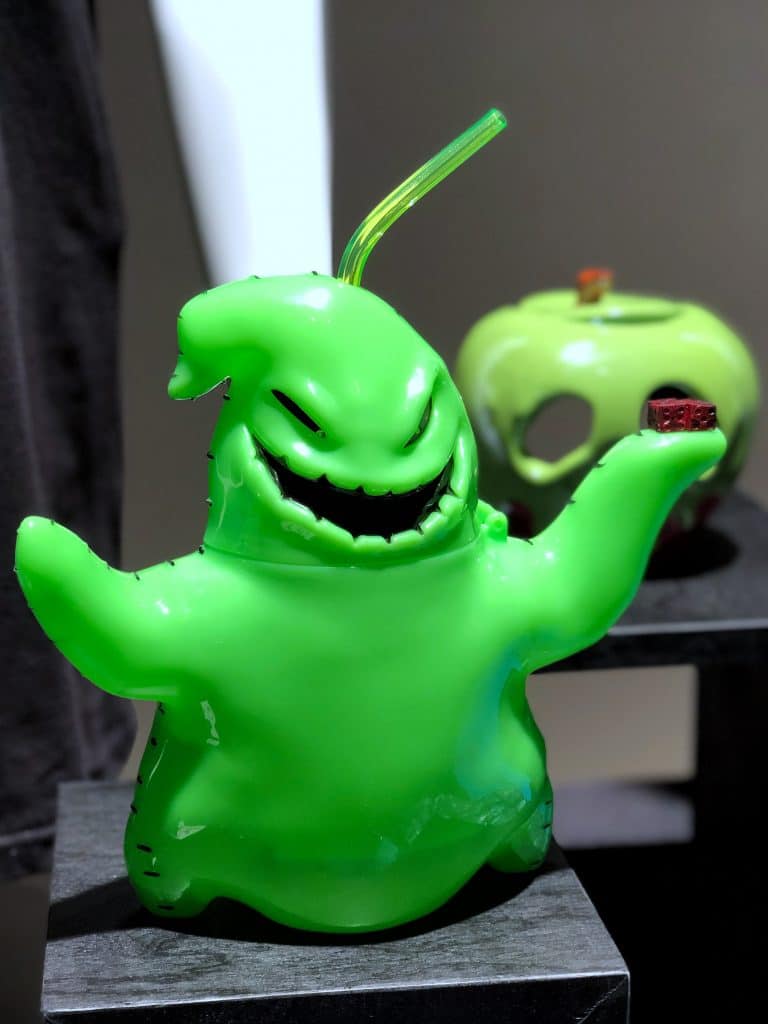 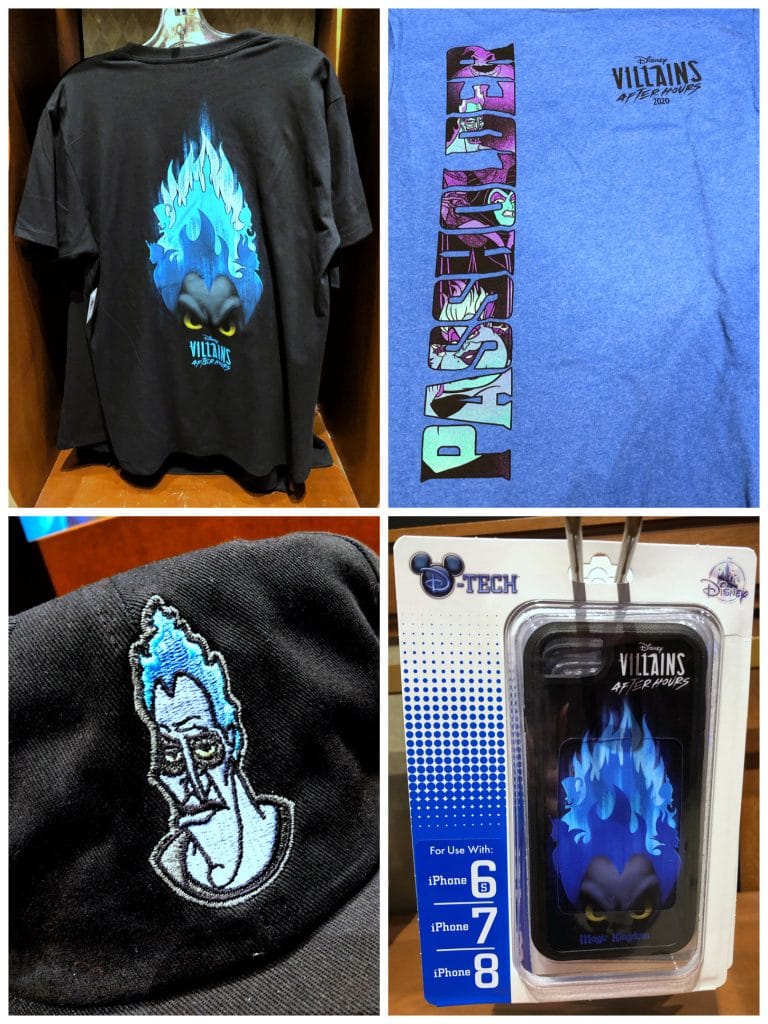 Looking for an extra “Magic Shot”?

You can get this one with Scar from The Lion King over in Adventureland near the Swiss Family Robinson Tree House. 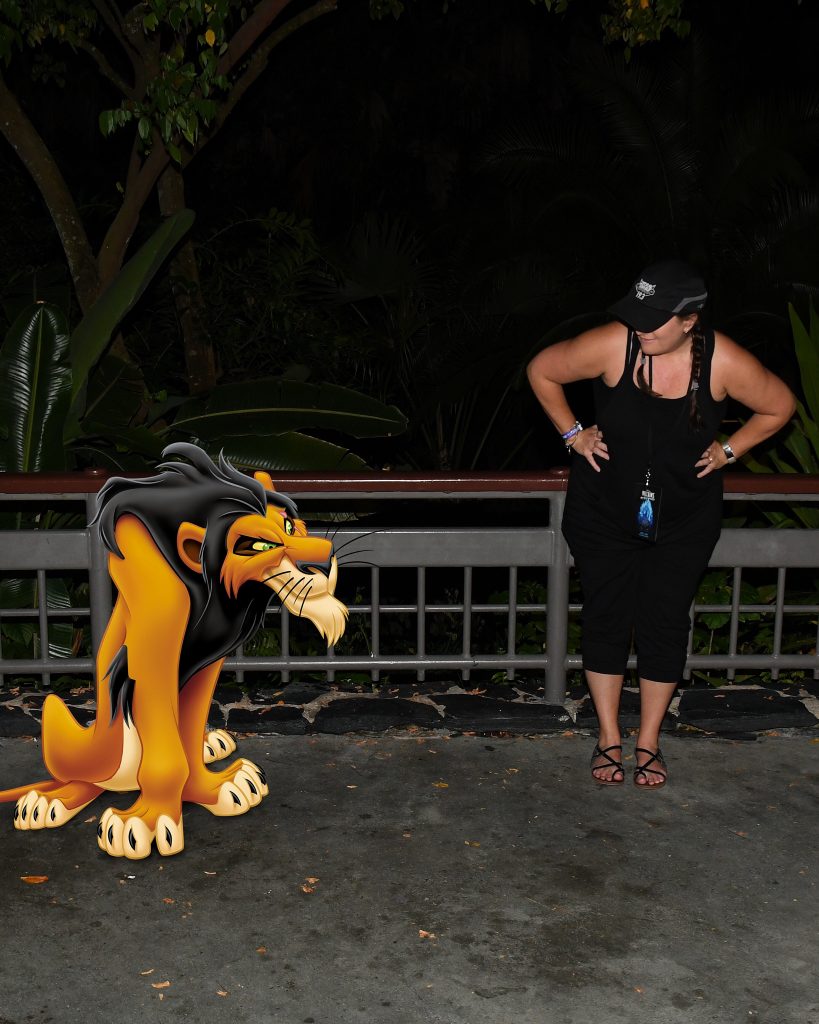 And this one with Oogie Boogie from A Nightmare Before Christmas at the entrance to Tomorrowland closest to the ‘closed’ Stitch’s Great Escape attraction. 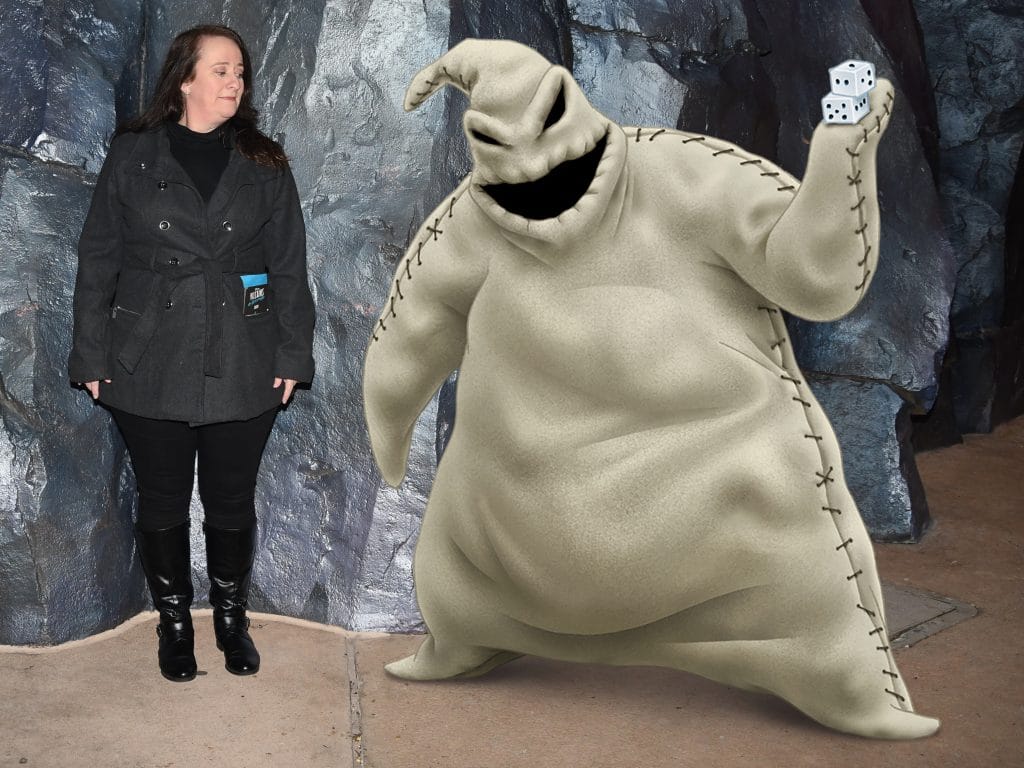 Villains After Hours runs from 9 pm – midnight on the following dates:

Villains After Hours runs from 10 pm – 1 am on the following dates:

No matter the party start time, you can enter the Magic Kingdom with your event ticket as early as 7 PM. 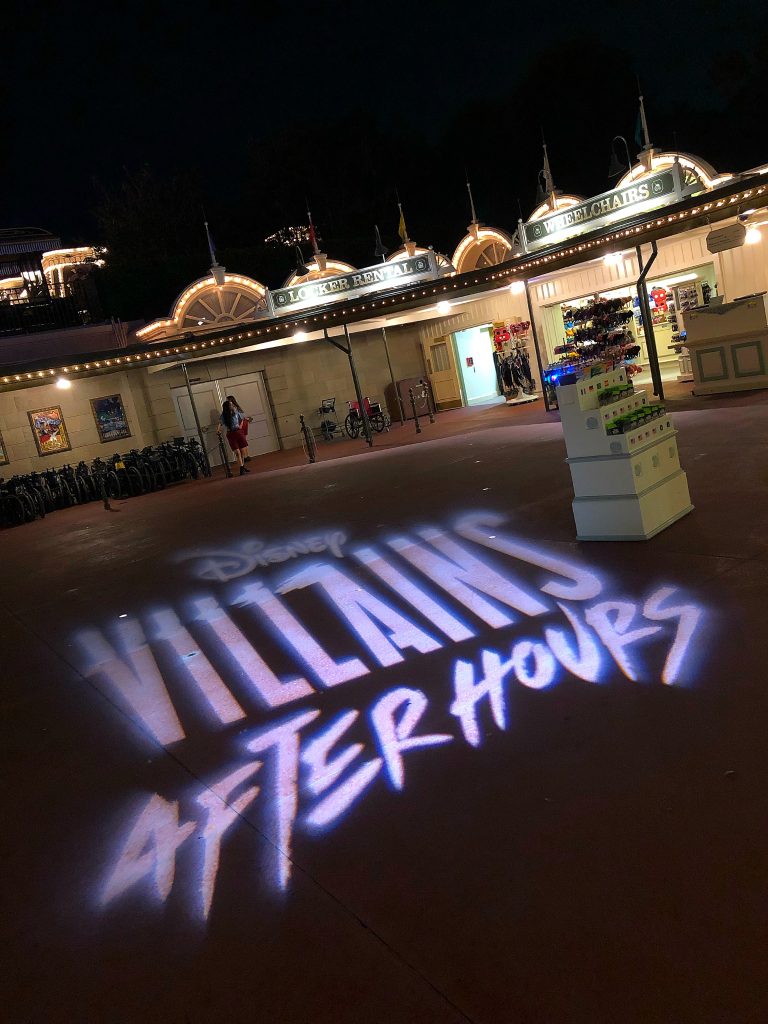 Crowd levels are non-existent at Disney Villains After Hours. It’s basically like being at a private park buyout and the longest line we saw for anything was twenty minutes for Seven Dwarfs Mine Train. Most rides were walk-ons.

The only downside to the event is that there are no villain character meet and greets. The only presence of characters is during the Villains Unite the Night stage show, the Villains’ Cursed Caravan parade and then there’s a villainous Kiss Goodnight high above the Main Street Train Station on your way out of the park. 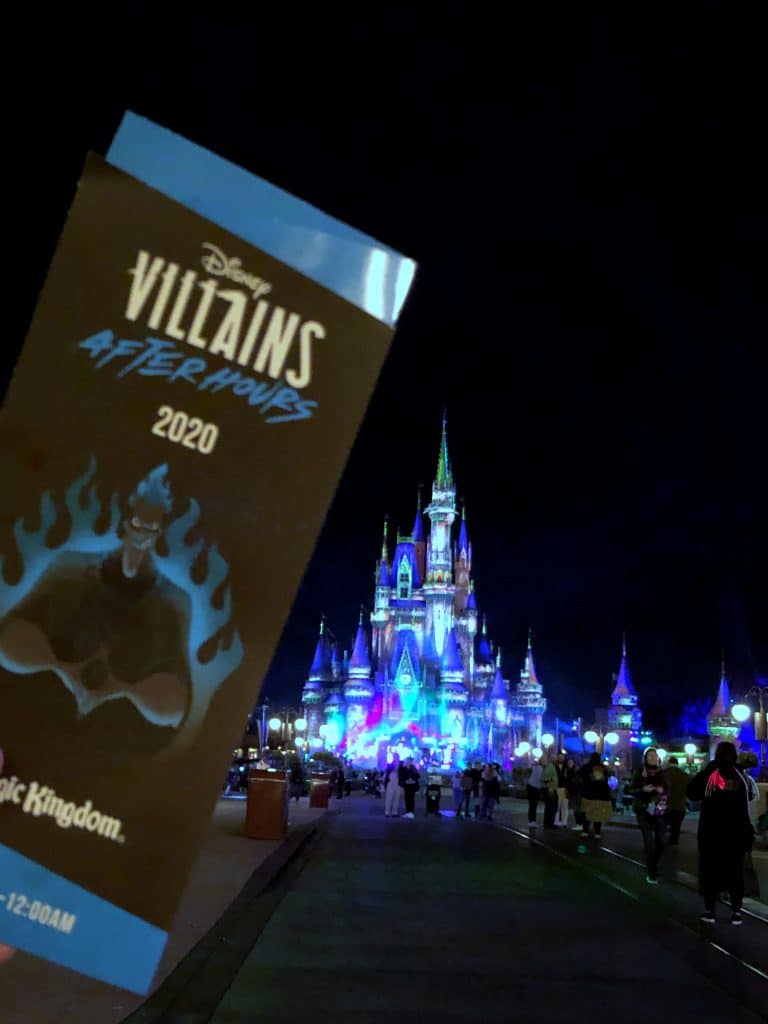 You can watch our complete Disney Villains After Hours vlog here…

For more info on Disney’s Villains After Hours and to purchase your tickets, visit DisneyWorld.com/VillainsAfterHours or call the Disney Reservation Center at 407-939-2742.

Special thanks to Disney for hosting us at this After Hours event. We were not required to write this post and all opinions are our own.

WANT TO REMEMBER THIS? Save the “Villains After Hours Vegan Guide” to your favorite Pinterest board. 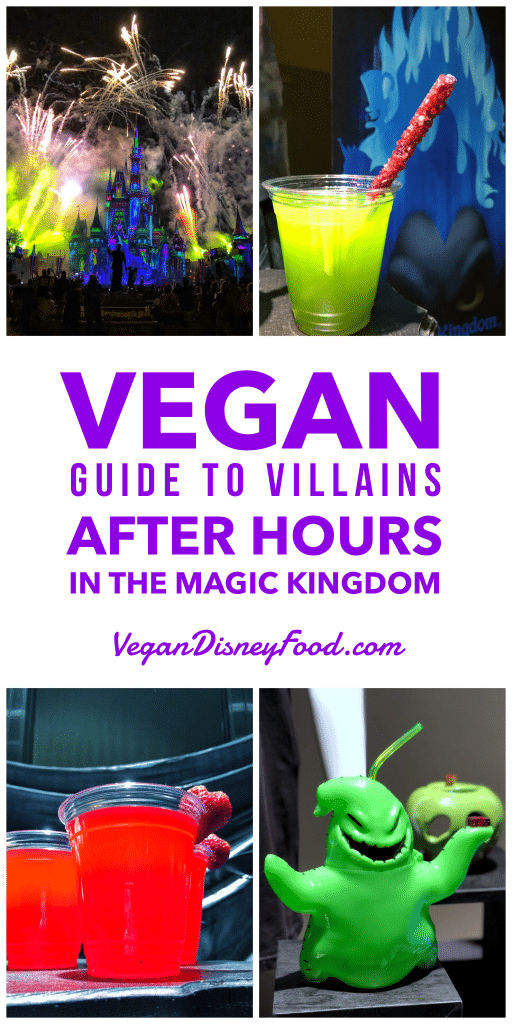 0 replies on “The Vegan Guide to Disney Villains After Hours in the Magic Kingdom”
Love VeganDisneyFood? Support the site: