With all the changes to the parks and resorts when Walt Disney World reopened, California Grill experienced some menu revisions as well. Formerly, vegans rejoiced at the “Plant-Based Unplugged” menu, where you could choose 4 different options from 11 completely vegan menu items for your entrée. Since reopening, we are down to one vegan pasta option, or the Forbidden sushi roll from the appetizers, which can definitely make a meal.

We certainly hope that the Vegan Unplugged dinner will return, but until then, we decided to check out the current offerings: vegan pasta! Last night we happened to enjoy the vegan pasta dish days after it had just been updated. As with the Unplugged menu, certain components at California Grill are updated seasonally. Below we share our thoughts on the California Grill vegan pasta.

Our reservation brought us upstairs right as the sun was setting, and it was a particularly smoky night out, making for a gorgeous view as we were seated. 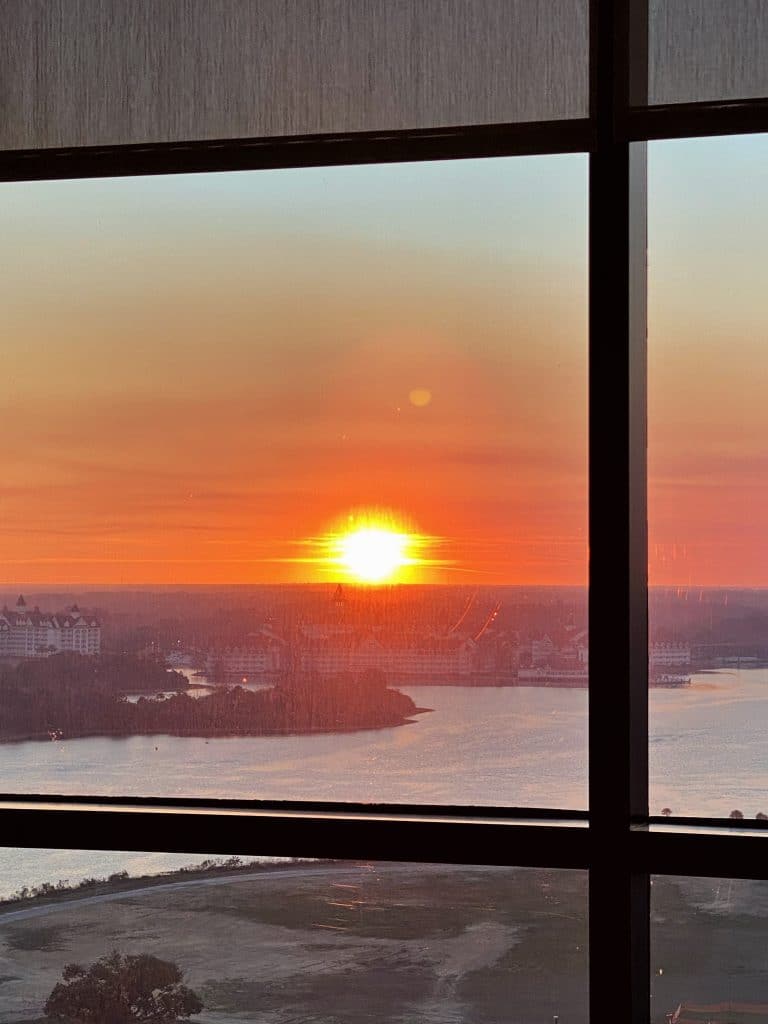 First we were brought the sourdough bread service, vegan as is. The tomato olive oil with garlic and chives  is still there and as delicious as ever. You can also request Earth Balance butter from the kitchen if tomato oil isn’t your thing.

The chef came out to discuss choices with us, and let us know that he could also modify the Grouper entrée to remove the fish and serve us the Thai Herb Basmati Rice with cashew chutney, bok choy and baby shiitake mushrooms in a kaffir lime coconut nage. This was also previously an option on the Unplugged menu.

Chef Nik let us know that they had just changed up the Plant-Based Pasta dish, and it was now house-made bucatini (vegan as is) with some roasted vegetables and a creamy sauce. He was very excited because they had added sunchokes and oca potatoes to the vegetables. 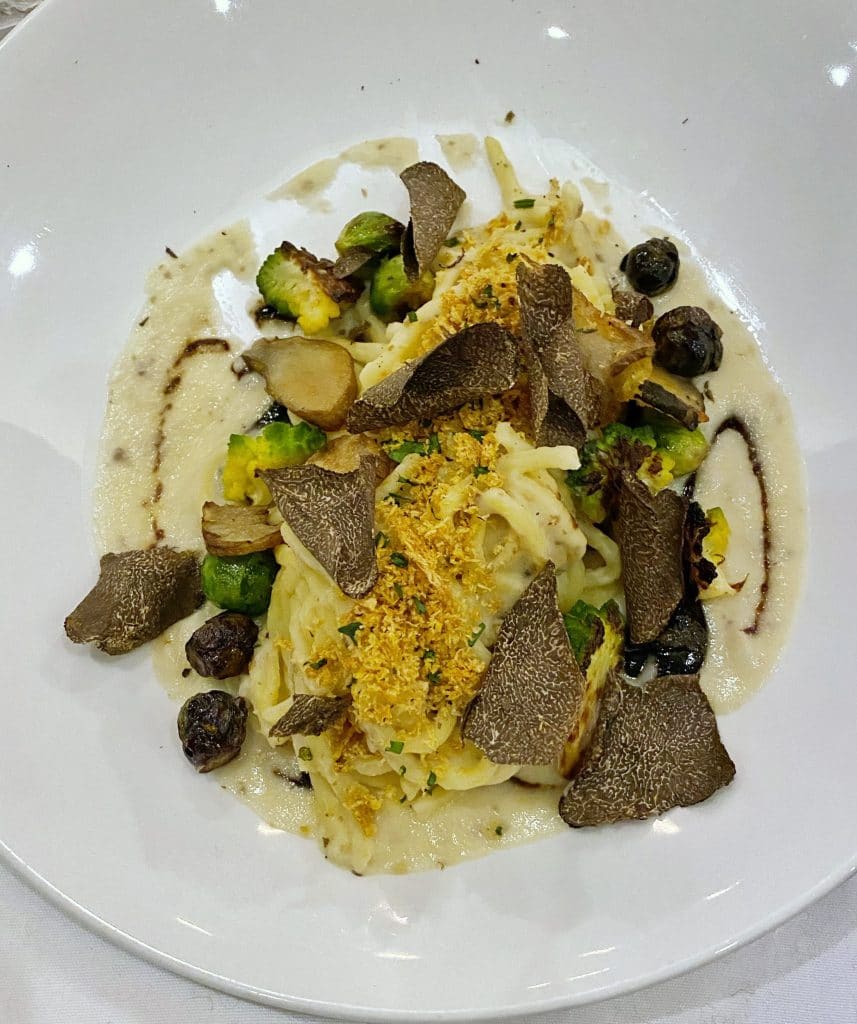 Oca are small tubers found near the Andes and apparently hard to come by in this country. These paired well with the sunchokes which are also more potato-like than artichoke-like. Joining in were broccoflower, baby Brussels sprouts, and shaved truffles on top with a drizzle of balsamic glaze. 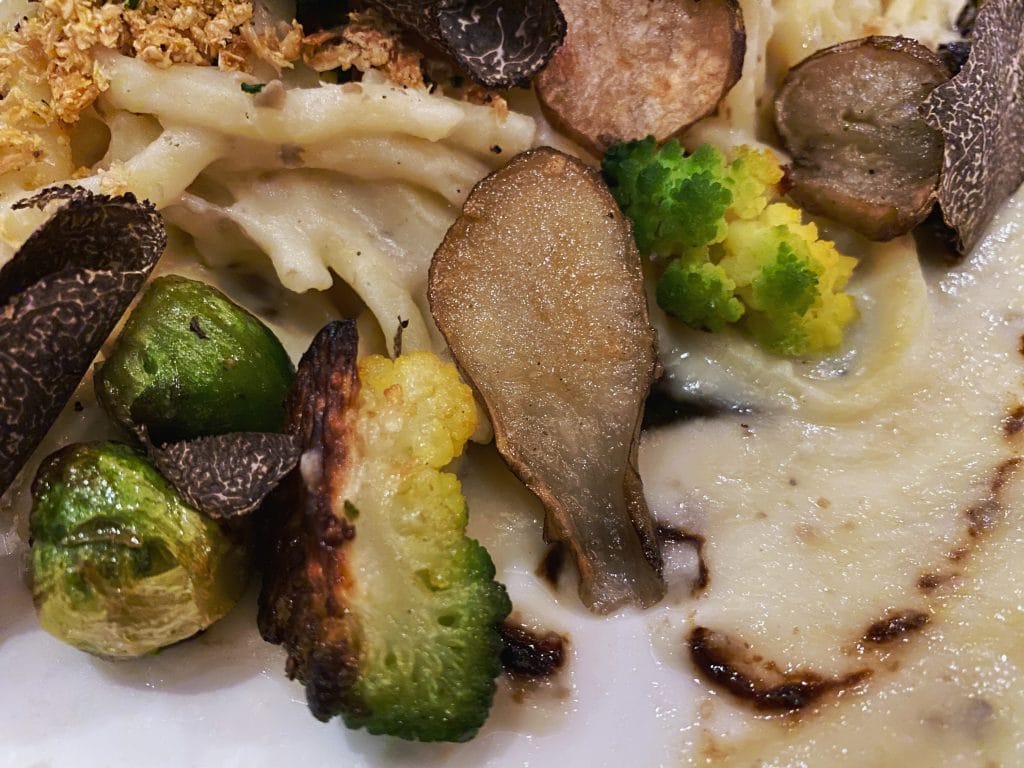 I had personally never had sunchokes or oca, so it was very fun to try something new. I enjoyed both! The sauce itself is a mix of pureed cauliflower, leeks, onions, salt, white pepper, sherry, vinegar and olive oil. The dish is then topped with a spring of cauliflower remoulade made with lemon zest, chives, parsley, truffle salt, salt and pepper, shaved black truffle, and sorrel.

This vegan pasta felt like a cross between an Alfredo sauce and a pasta primavera. Green veggies balanced the heavier sauce and starchy tubers. The balsamic glaze gave it a tart finish.

Sadly, there were no fireworks to end the night, but California Grill still offers its own natural “fireworks” if you time it right. No matter when you visit, California Grill offers amazing views of the Walt Disney World Resort, day or night.

Have you been to California Grill since it reopened? What were your thoughts?