Typhoon Lagoon just opened up after their winter refurb and it looks like the Leaning Palms Vegan Menu got a makeover as well. I headed out recently and ordered “all the things” to share with you in this post.

Typhoon Lagoon is one of two operational water parks in the Walt Disney World Resort. The other is Blizzard Beach. You can find Typoon near Disney Springs tucked away on a lushly landscaped winding road. 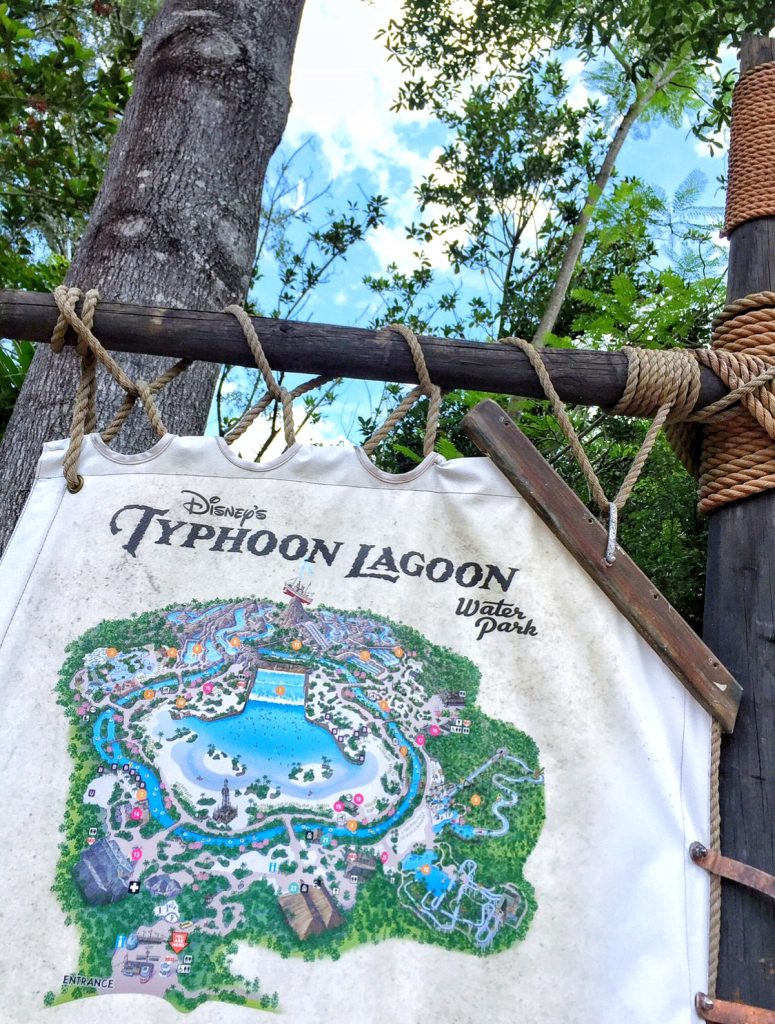 Because this is a water park all the dining options are quick service. Leaning Palms has the most extensive menu and can be found in the southwest corner of the park.

The story behind the restaurant is that it used to be called Placid Palms Resort until a storm nearly washed it away. After the damage it was renamed Leaning Palms and turned into a restaurant. 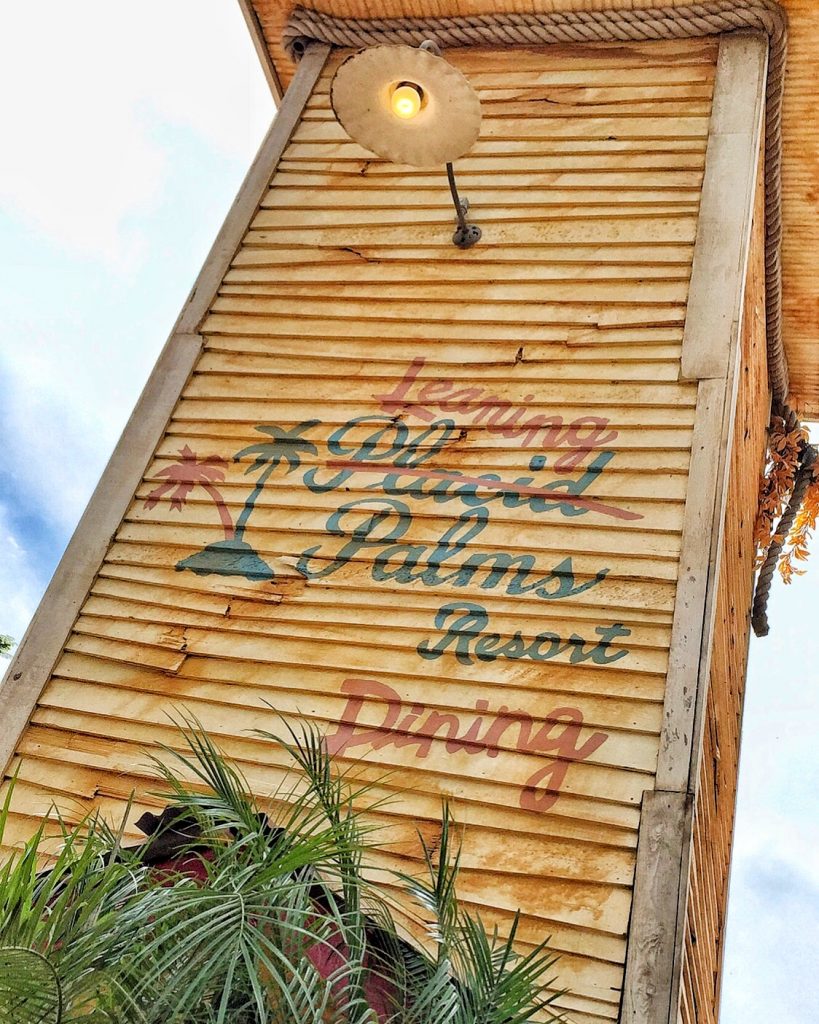 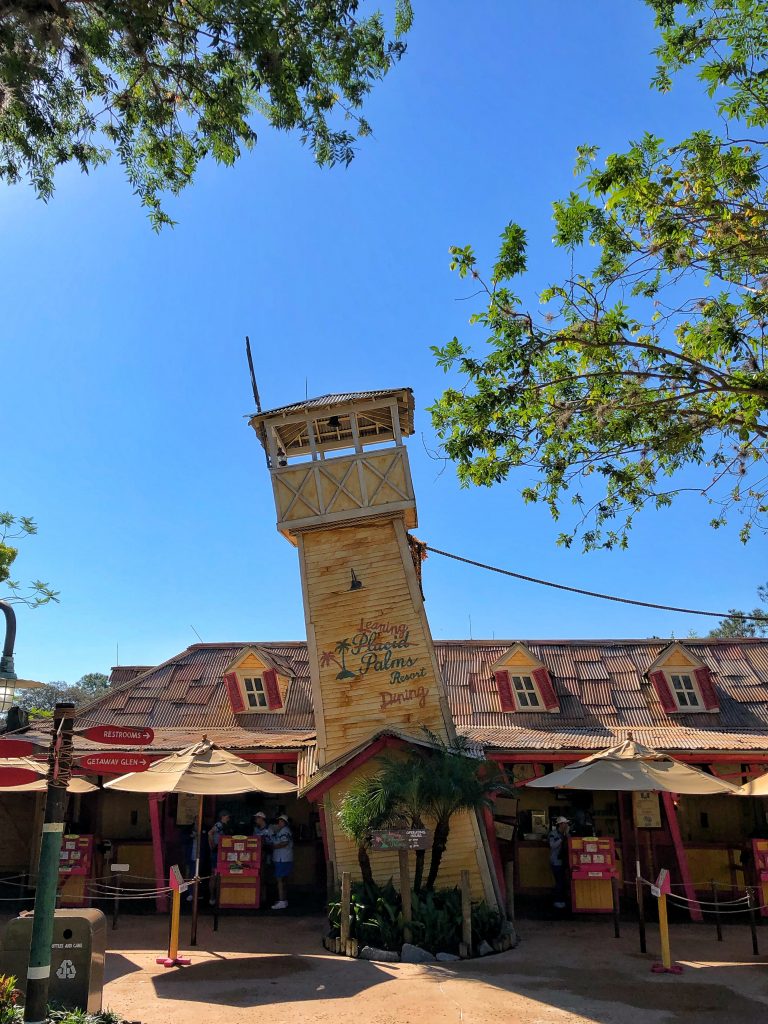 The atmosphere at Leaning Palms is of course tropical. There are four different picnic table seating areas for guests to enjoy after picking up their food.

Two areas are completely covered and sheltered from the weather. Ceilings are decorated with row boats, life preservers, oars and brightly colored buckets. 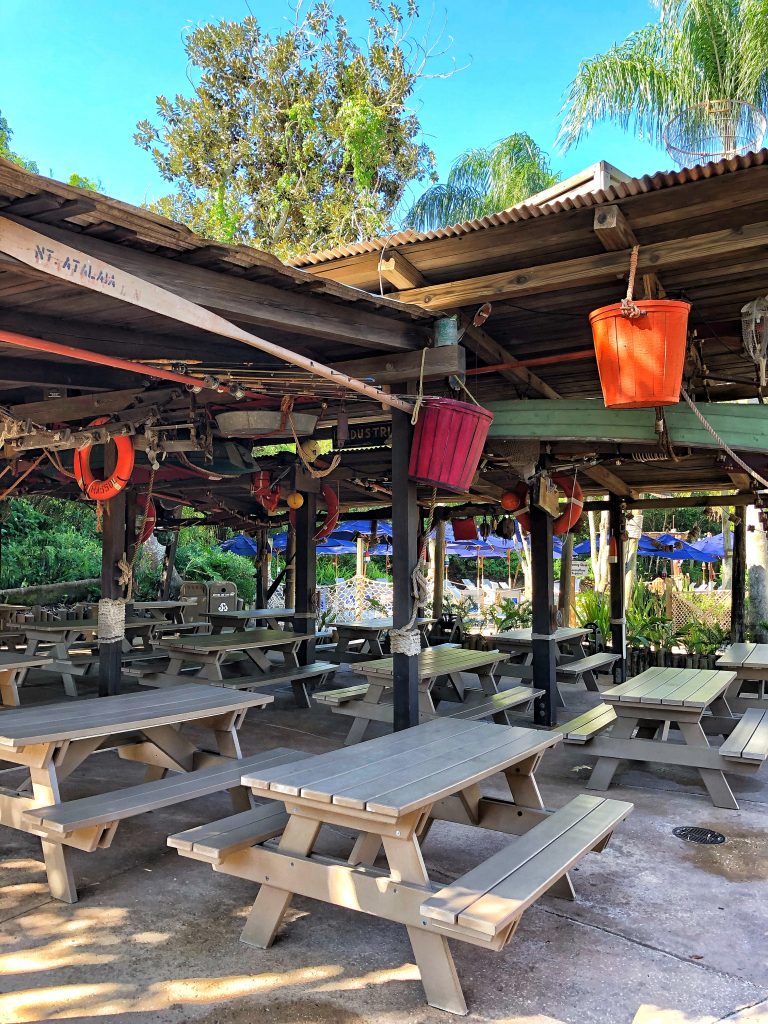 The other seating areas sit along the shore of the park’s lazy river where shade is provided by mature trees. 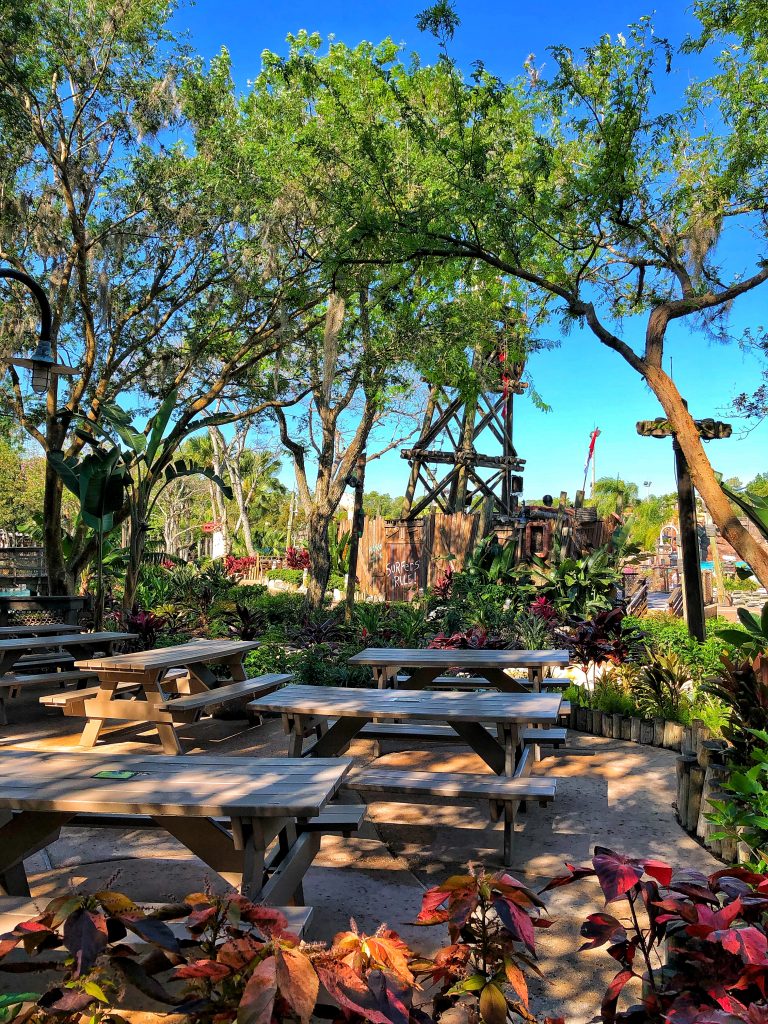 There are seven items on the new plant-Based menu here. I ordered five of them. 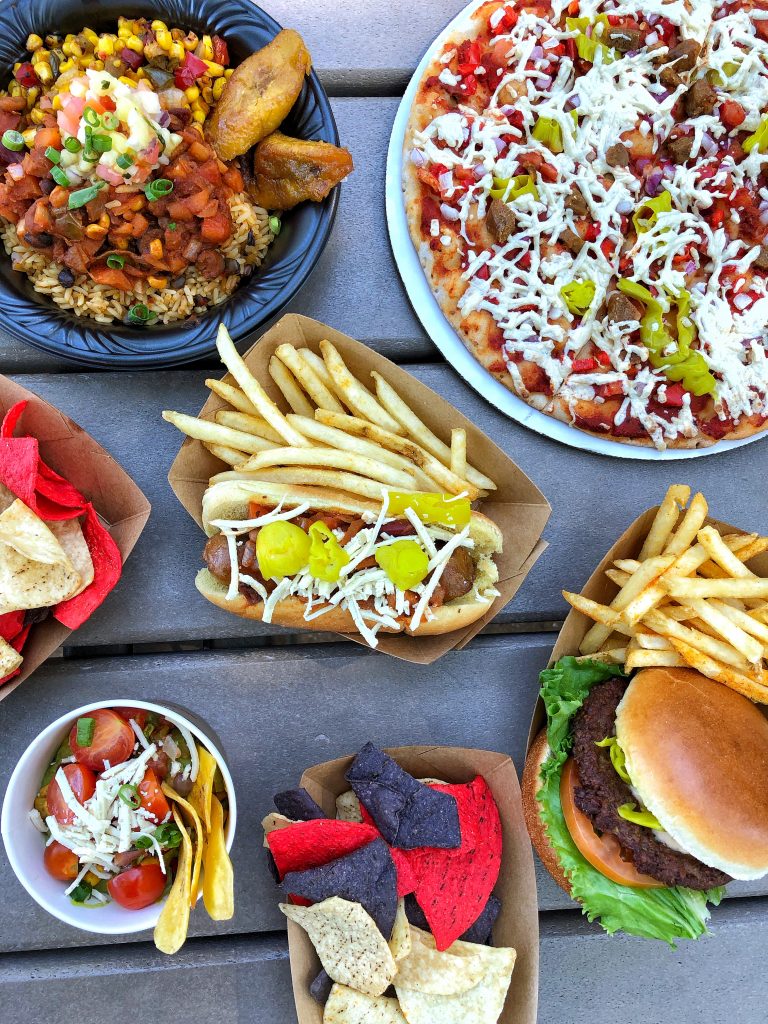 My favorite item was the Plant-Based Bratwurst ($11.49) made with a plant-based Beyond Bratwurst topped with meatless picadillo, vegan mozzarella, onions and banana pepper slices. It was served with a side of seasoned thin fries. 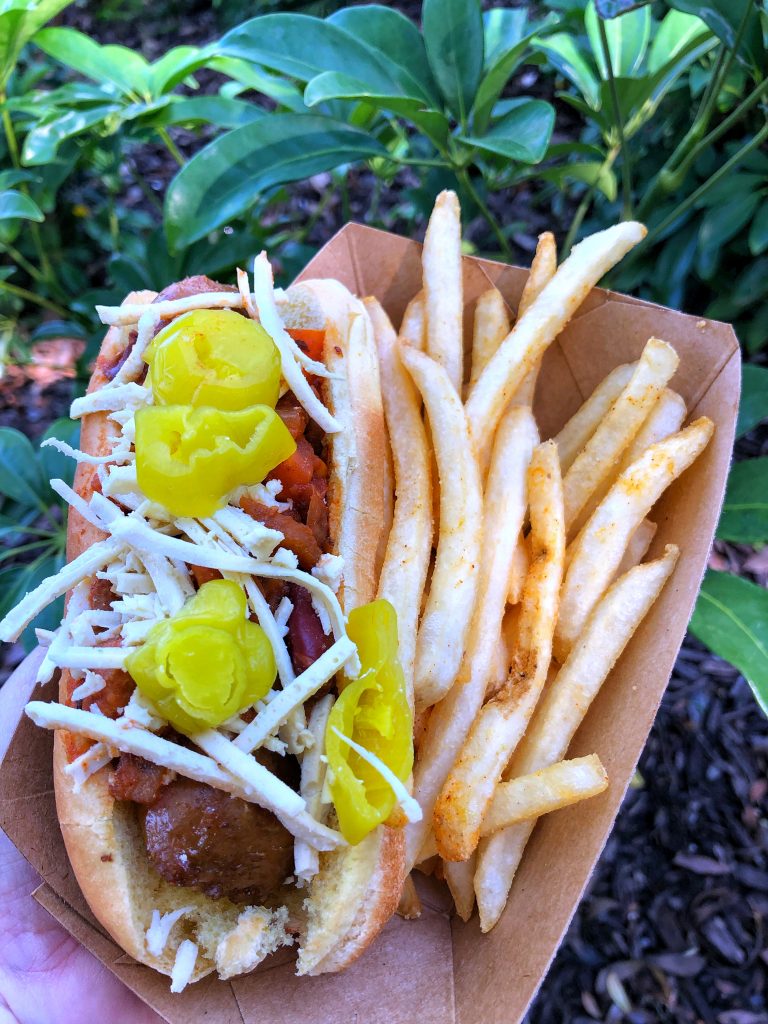 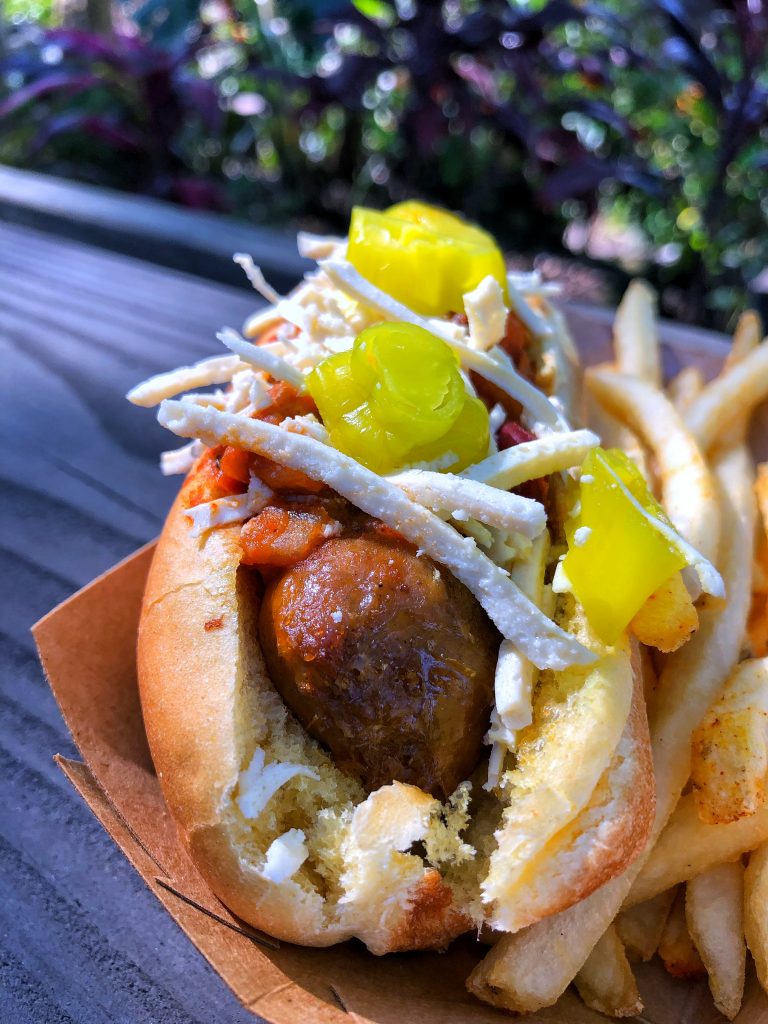 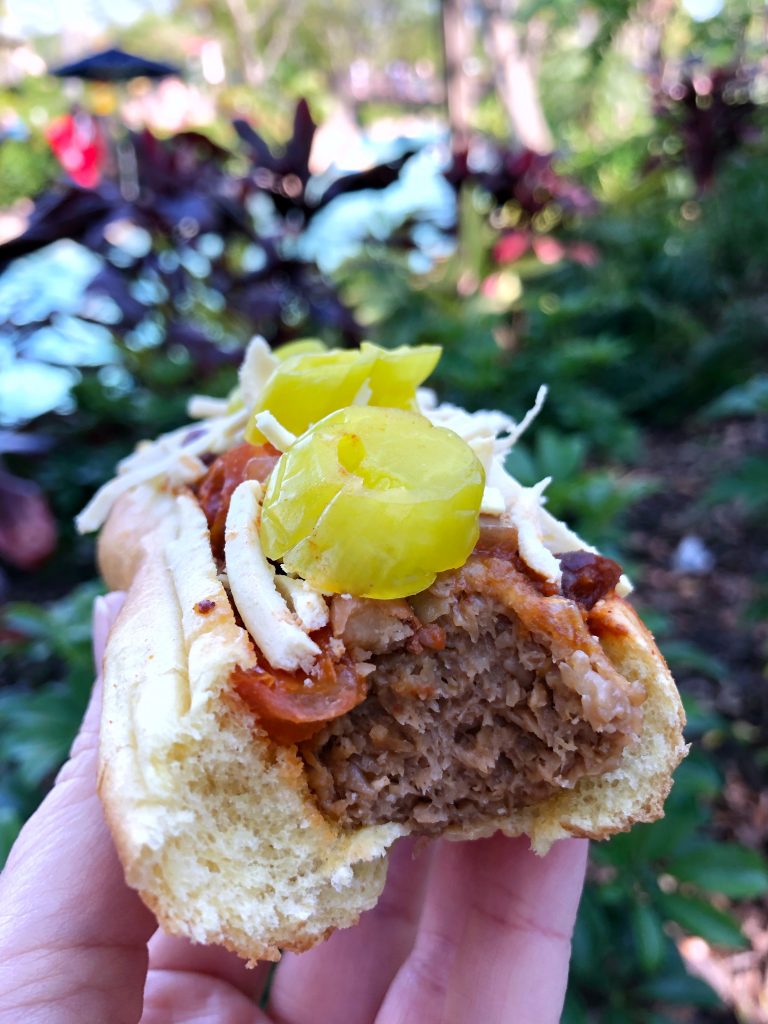 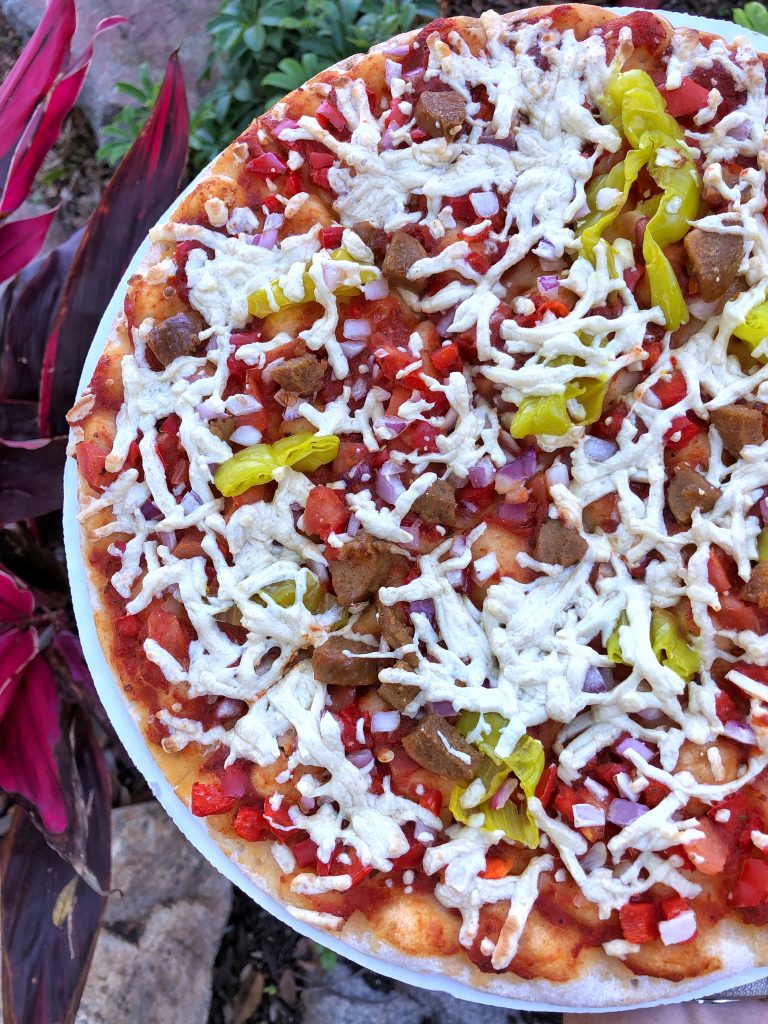 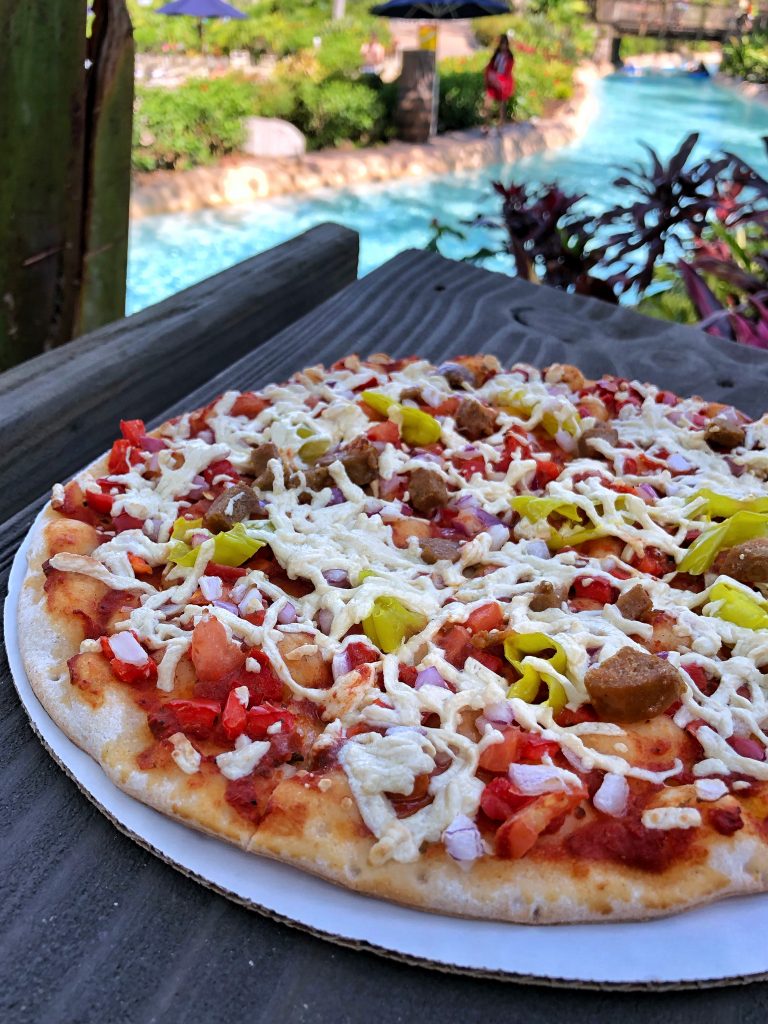 Next up is the Vegetable Guacamole Dip ($6.99) which was made fresh and topped with roasted corn, tomatoes and vegan mozzarella cheese. 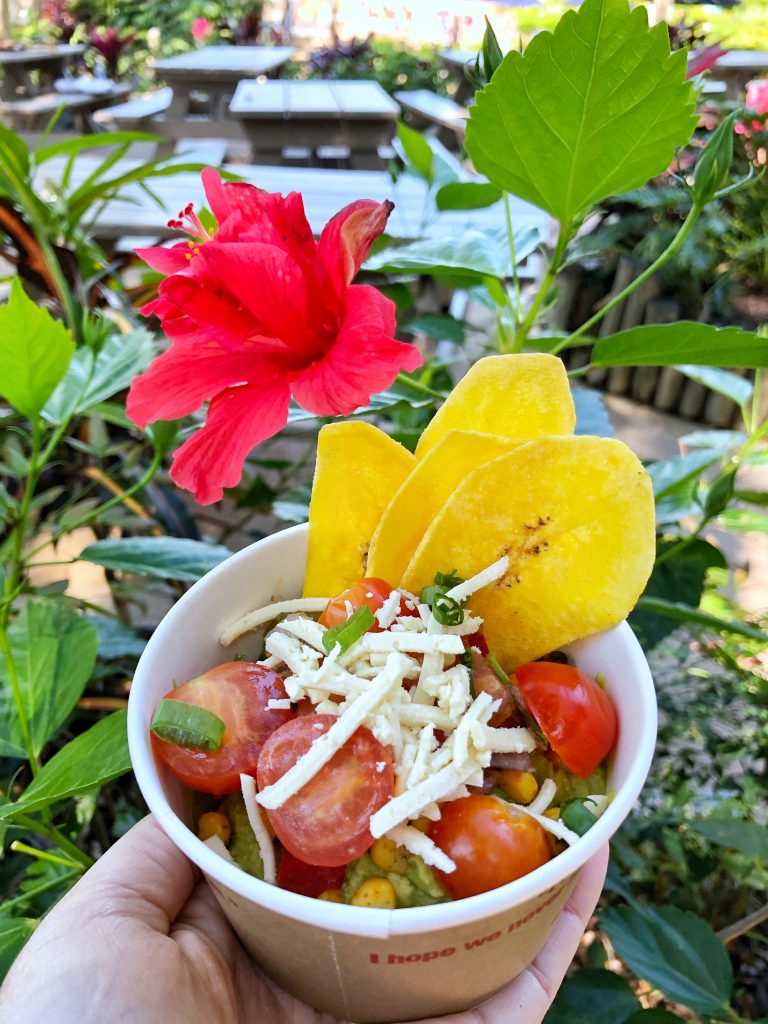 The guac was garnished with plantain chips but also came with a side of tri colored tortilla chips. Mmmmm, the perfect bite! 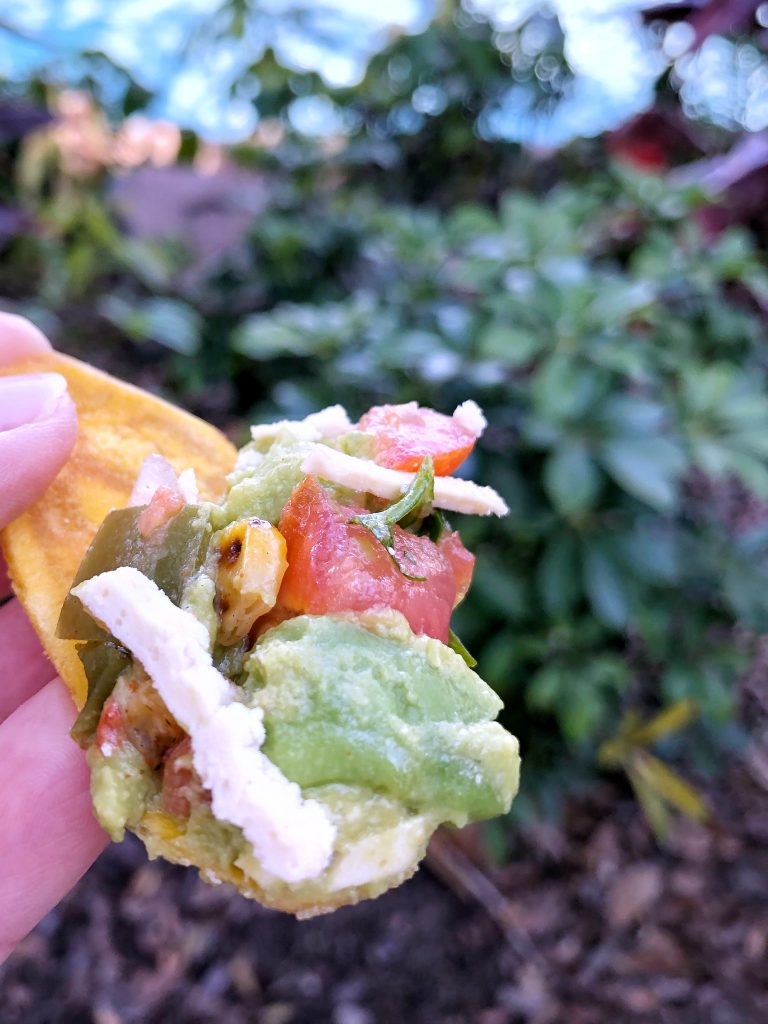 I also enjoyed the Plant-based Picadillo Rice Bowl ($7.99) which was a base of rice and pigeon peas topped with vegan picadillo, roasted corn, peppers, scallions and pineapple salsa. Sweet plantains came with the dish.

Let me tell ya, this bowl has a kick to it. 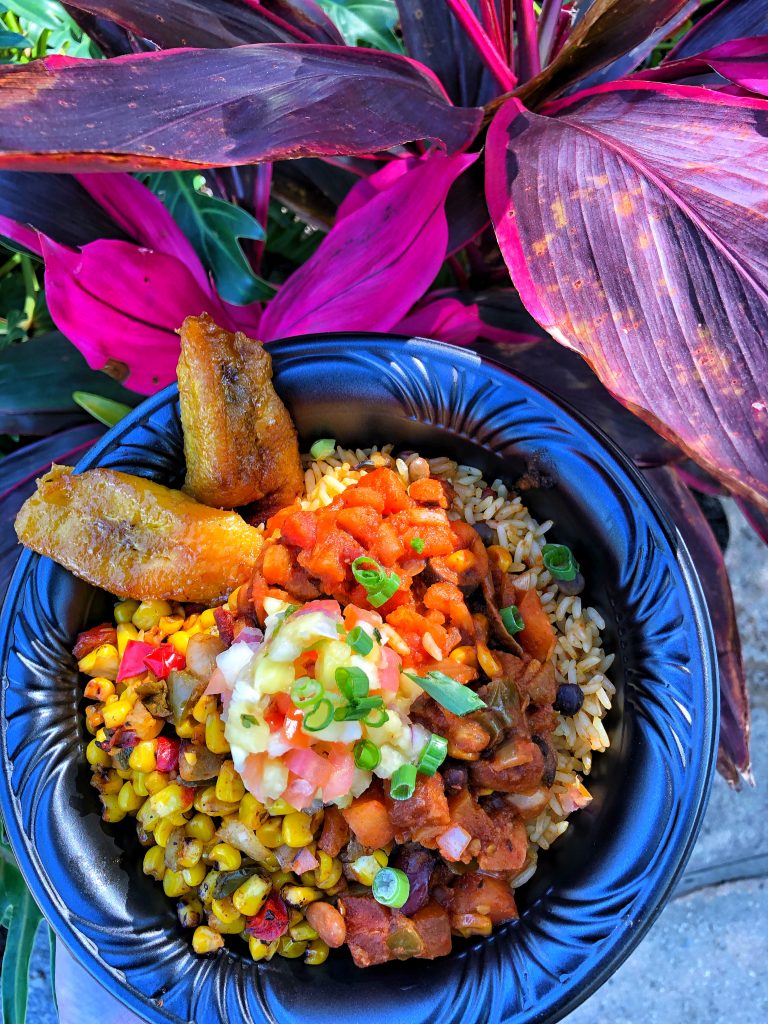 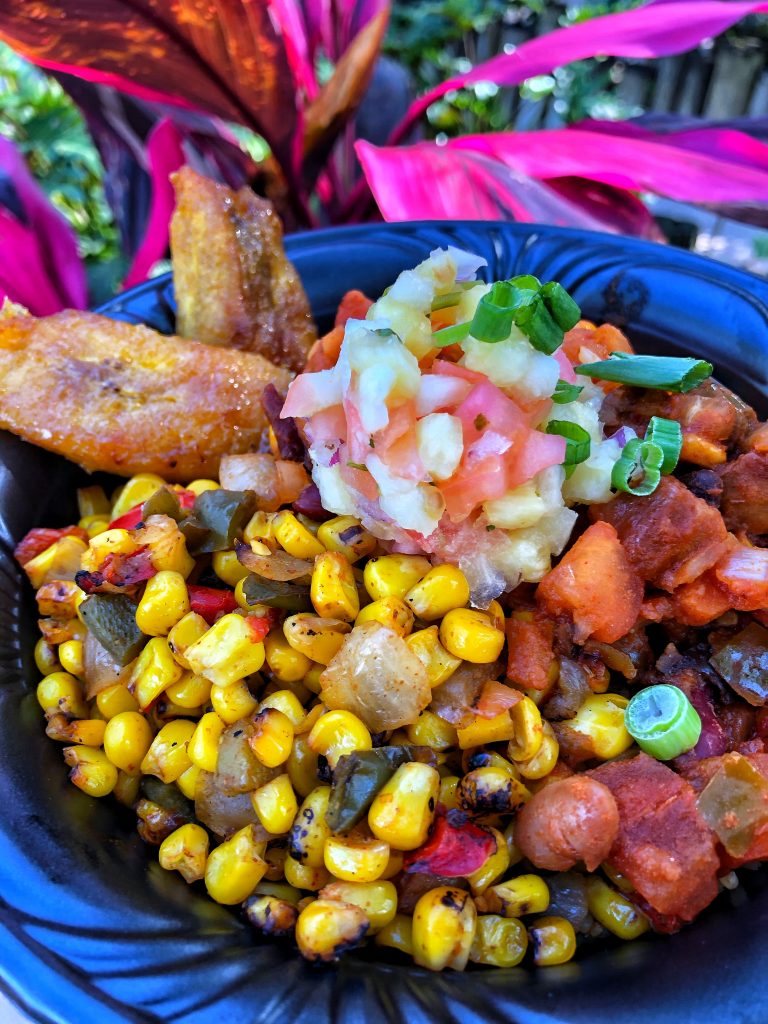 My least favorite item was the Impossible Burger ($12.75) and it pains me to say that because I am “TEAM IMPOSSIBLE BURGER”. This one is topped with vegan chipotle mayonnaise, lettuce, tomato and banana peppers and is served on a vegan brioche bun. The burger comes with fries and non-vegan cole slaw, so you’ll have to ask for extra fries or you can also get tri colored tortilla chips. 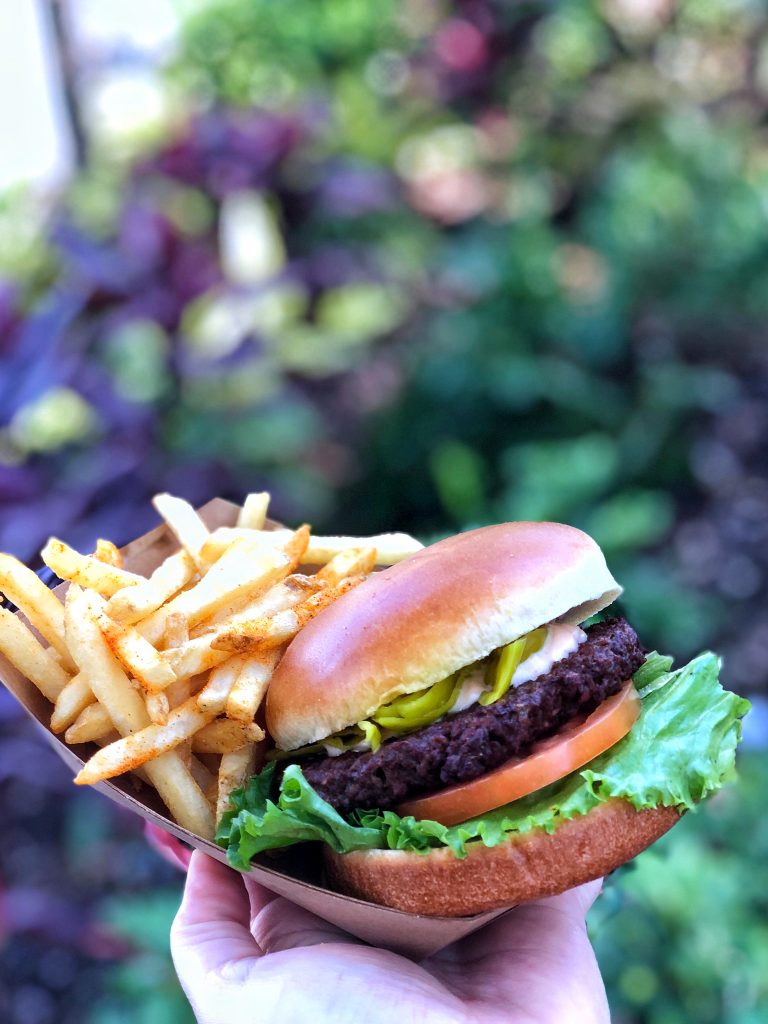 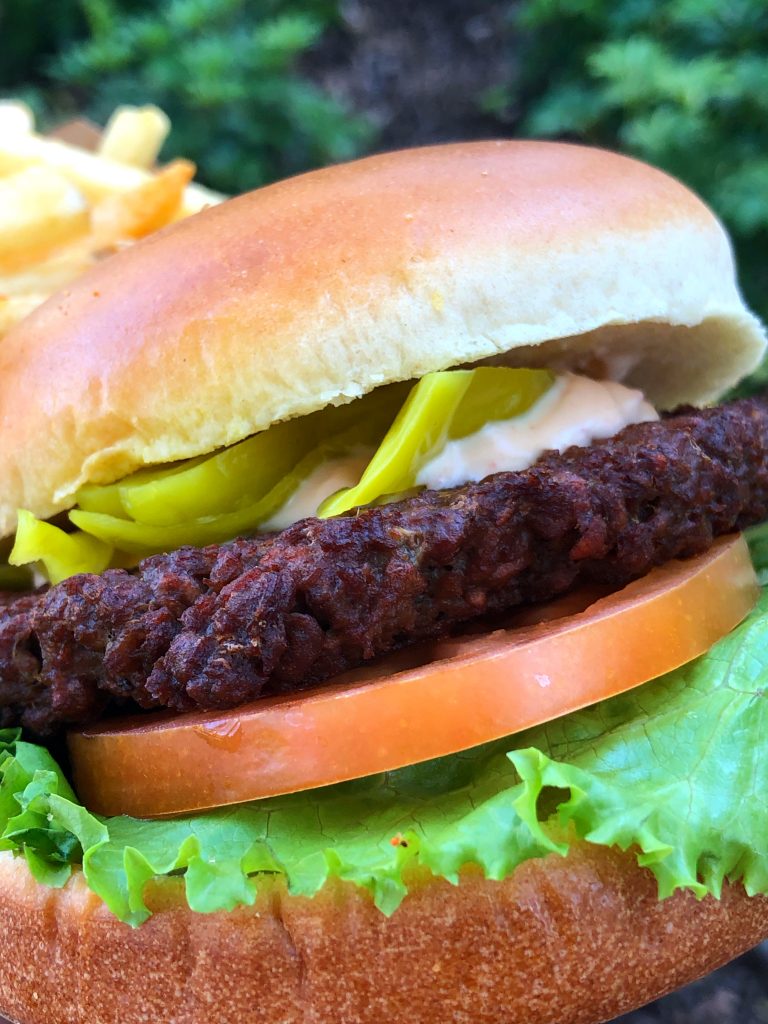 You may have remembered me talking about this last year in my Typhoon Lagoon H2O Glow Nights review. ` I am happy to report that it was such a hit, it made its way onto the regular menu. The only reason why I didn’t like my burger is because the chef cooked it to death. Like literal death. Hockey puck status.

There were two items on the vegan menu I did not order. The first item sounded good, it was a Tropical Salad filled with lettuce, mandarin oranges, melons, strawberries, dried cranberries, tomato, cucumber, candied pecans and a raspberry dressing.

The other item was the Vegan Wrap which consists of a flower tortilla filled with roasted corn, peppers, onions, sweet plantains, black beans, barbecue sauce, guacamole and pico de gallo.  I have ordered this wrap before. They pre-make them so they always end up being soggy. Enjoy Life cookies and fruit cups may be ordered for dessert.

I hope you’re as jazzed as I am about these new summertime offerings at Typhoon Lagoon. See ya out on the lazy river folks!

WANT TO REMEMBER THIS OPTION? Save the “Vegan Disney Food Review: Leaning Palms at Disney’s Typhoon Lagoon” pin to your favorite Pinterest board. 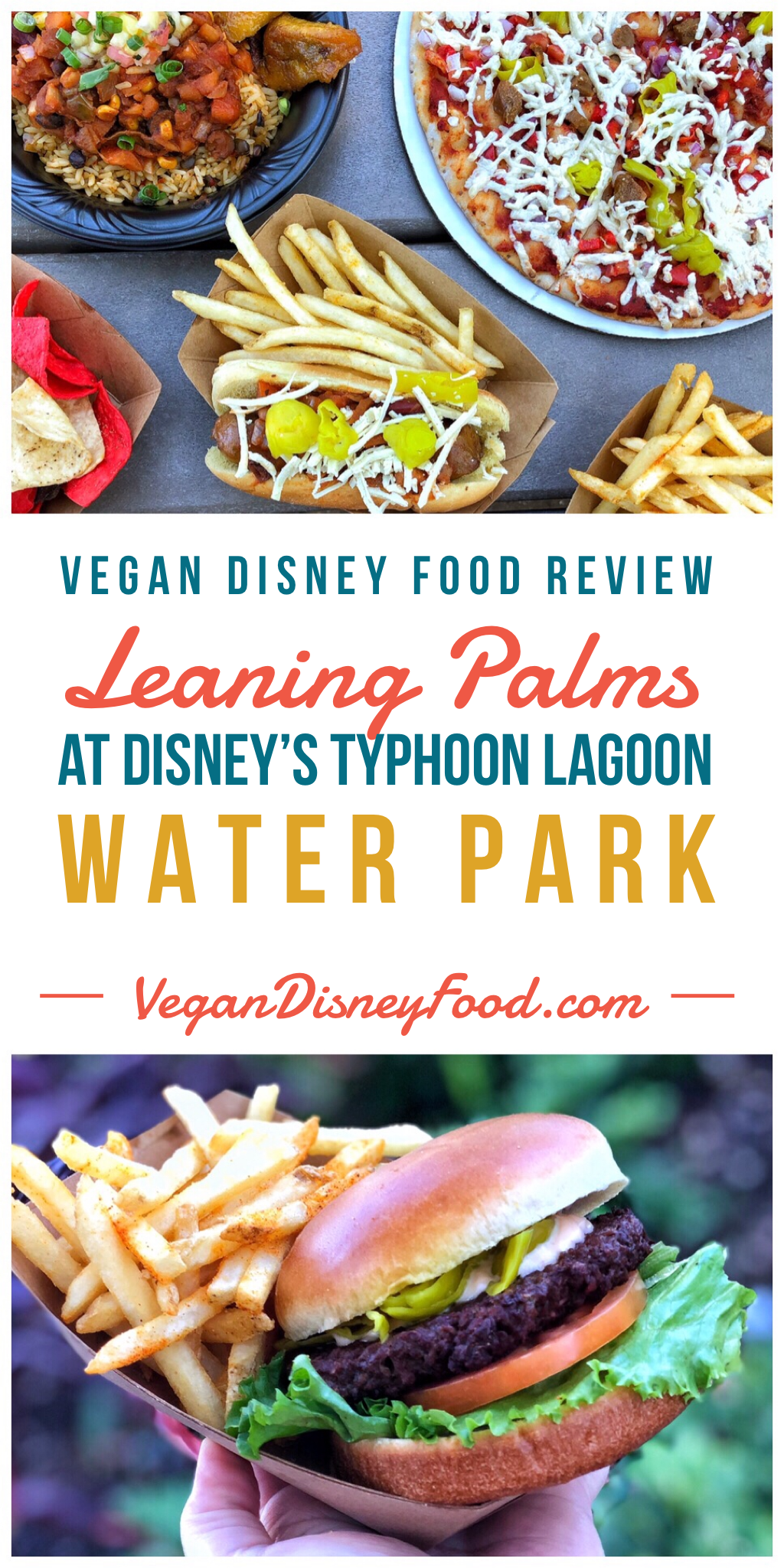