We’ve all been waiting for it. This post right here. The first look at what vegan options Chef TJ is whipping up at his new location, Cape May Cafe in Disney’s Beach Club Resort at Walt Disney World!

What’s Vegan at Disney’s Cape May Cafe with Chef TJ at the Beach Club?

Have no clue what I’m talking about?

Let me fill you in real quick. There’s a legend amongst vegan visitors to the Walt Disney World resort. That legend is Chef’s TJ. He’s an allergy chef who has been doling out multicourse vegan meals for guests at Trail’s End Restaurant in Disney‘s Fort Wilderness Resort and Campground for the past few years.

And here’s what you can expect at Trail’s End without Chef TJ: Vegan at Trails End at Disney’s Ft Wilderness Resort {Without Chef TJ}

Recently chef took a transfer over to Disney’s Beach Club Resort and is now serving guests at the ‘seafood centric’ Cape May Café. 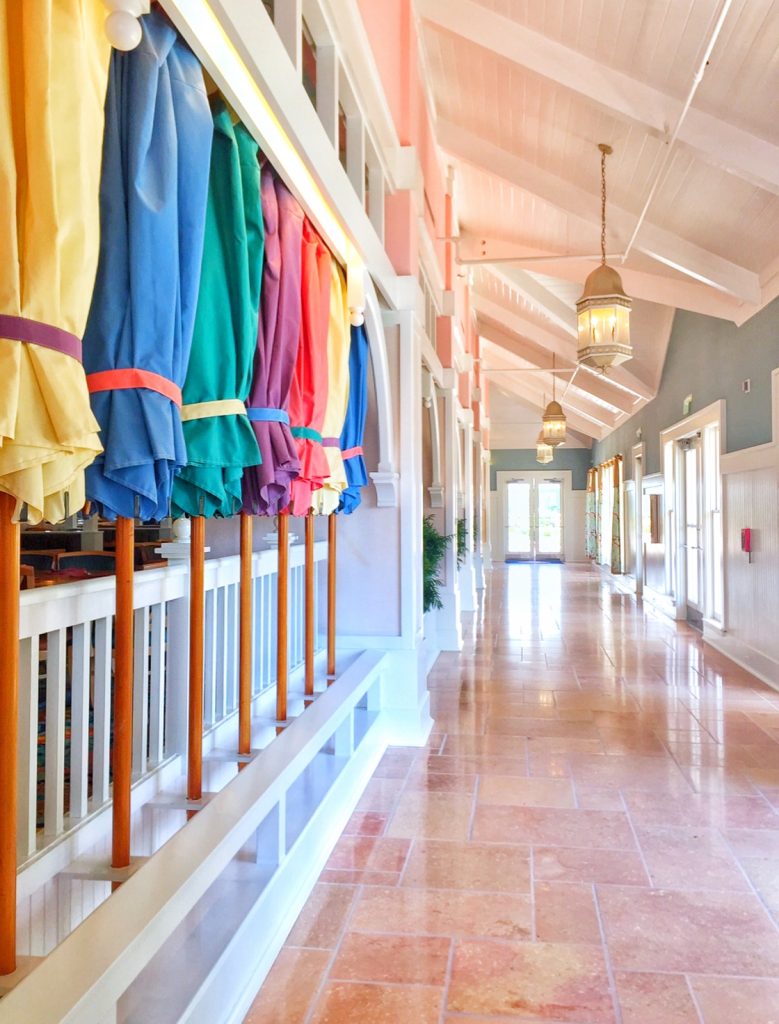 And thanks to Kimberly Mannahan of Magical Moments Vacations by Kimberly we have a first look at what you can expect from Chef TJ during a vegan dinner service.

This meal started out with a special vegan salad.

This was proceeded by a vegan burger and vegetable platter which looks slightly familiar. The vegan entree over at Trail’s End restaurant was composed of similar elements. 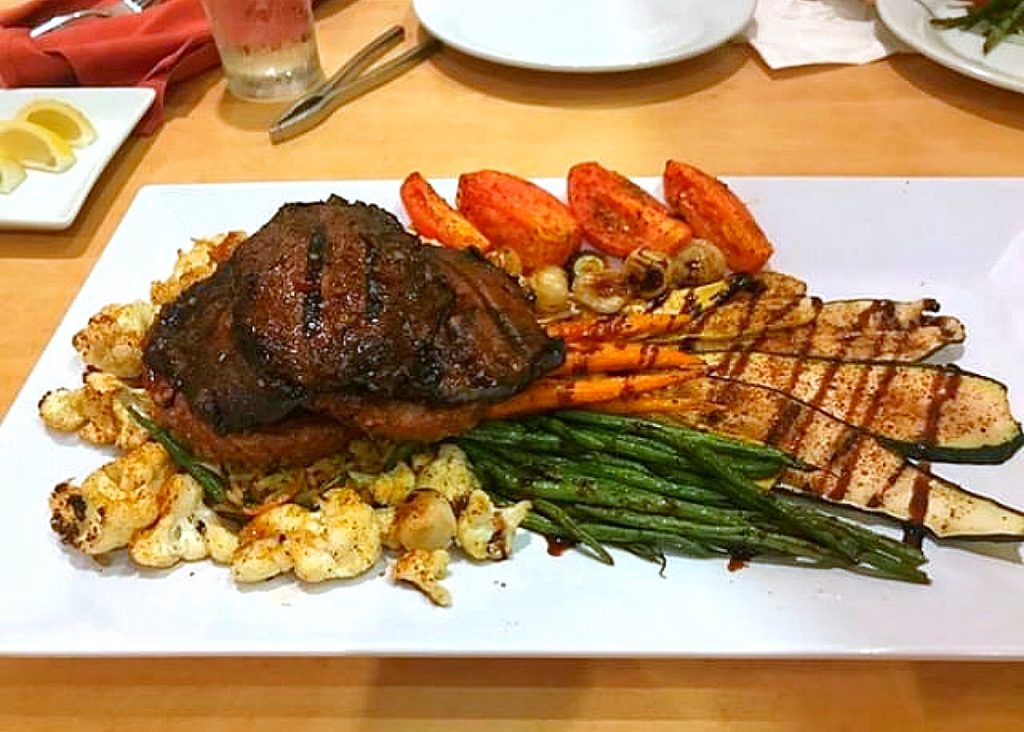 The plate starts with a base of Beyond burgers. Those patties are topped with grilled portobello mushrooms. Also included are seasoned carrots, green beans, zucchini, onions, cauliflower and tomatoes.

Dessert was somewhat similar to the “tower of sweets” that the chef presented to guests at Trail’s End restaurant.

This tower included a base of fresh strawberries, cantaloupe and watermelon and skewers layered with bananas, vegan cake, vegan cookies and a scoop of vegan chocolate ice cream drizzled with more vegan chocolate sauce. 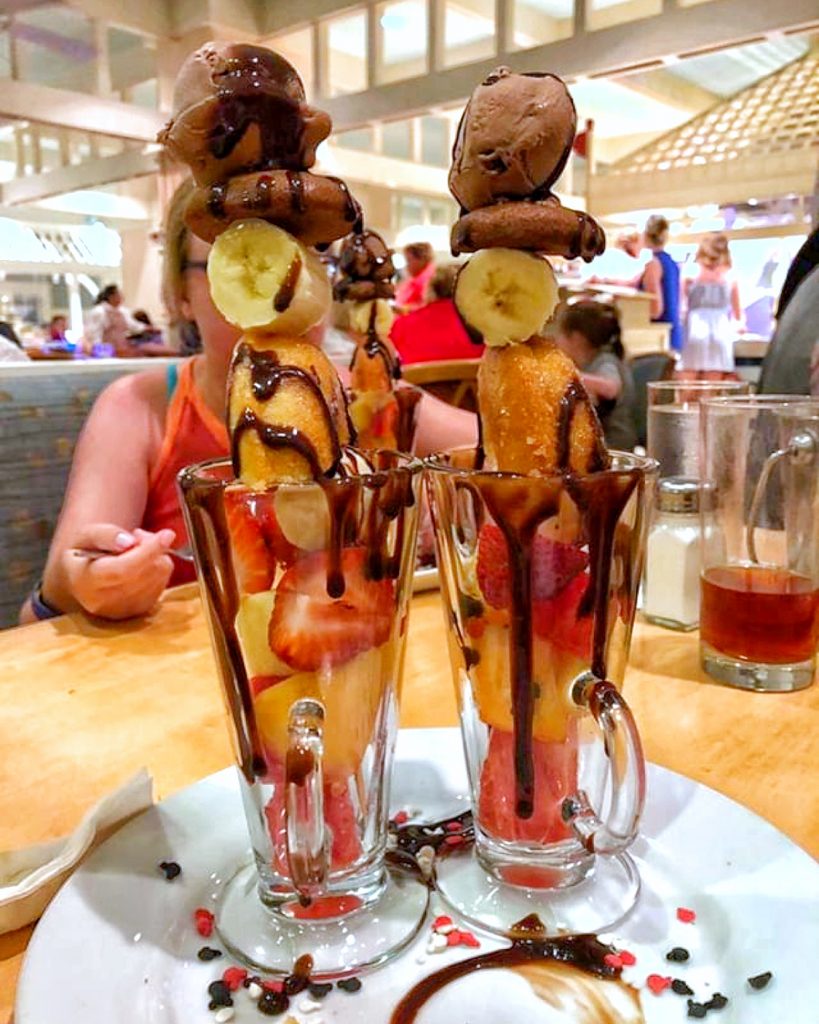 A small bit of warning about Cape May Café in Disney’s Beach Club Resort. The restaurant, as I mentioned before, is seafood centric. The smell emanating from inside the restaurant carries out into the walkway around the perimeter of the space and even into the resort lobby. If the smell of seafood makes you cringe you may want to avoid dining here.

WANT TO REMEMBER THIS OPTION? Save the “What’s Vegan at Disney’s Cape May Cafe with Chef TJ at the Beach Club?” pin to your favorite Pinterest board. 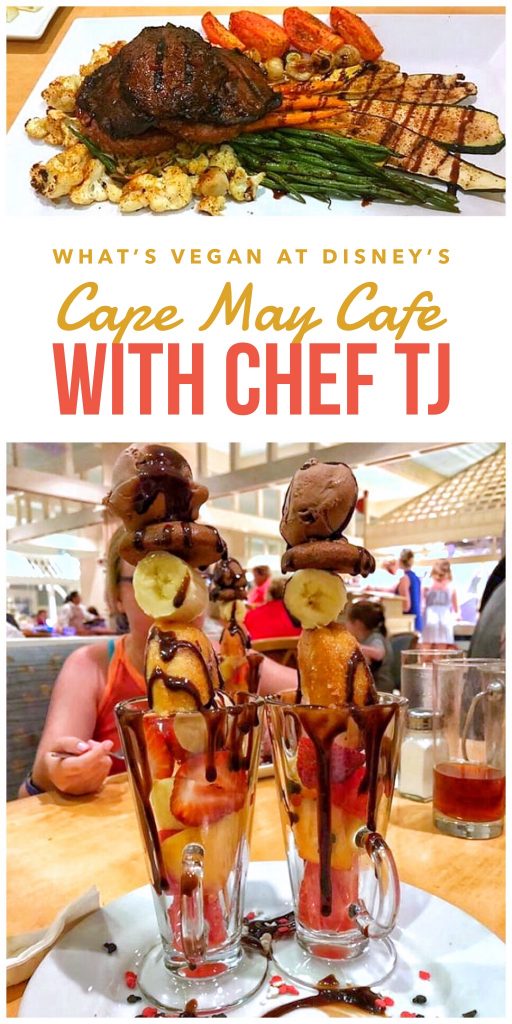 0 replies on “What’s Vegan at Disney’s Cape May Cafe with Chef TJ at the Beach Club?”
Love VeganDisneyFood? Support the site: