Let’s take a look at what’s vegan at Three Bridges Bar & Grill at Villa del Lago in Walt Disney World’s Coronado Springs Resort. The menu has been changed up a few times, so we wanted to update this post with the most accurate info as of June 2022.

Coronado Springs recently completed a major expansion with the addition of the new Gran Destino Tower. Set on the shore of Lago Dorado, the new resort tower celebrates the spirit of great Spanish explorers, artists, writers and architects.

Gran Destino Tower brings with it a gorgeous rooftop eatery Toledo as well as the Dahlia Lounge. For now, let’s talk about a third location, Three Bridges Bar and Grill at Villa del Lago, which sits atop the waters of Lago Dorado. 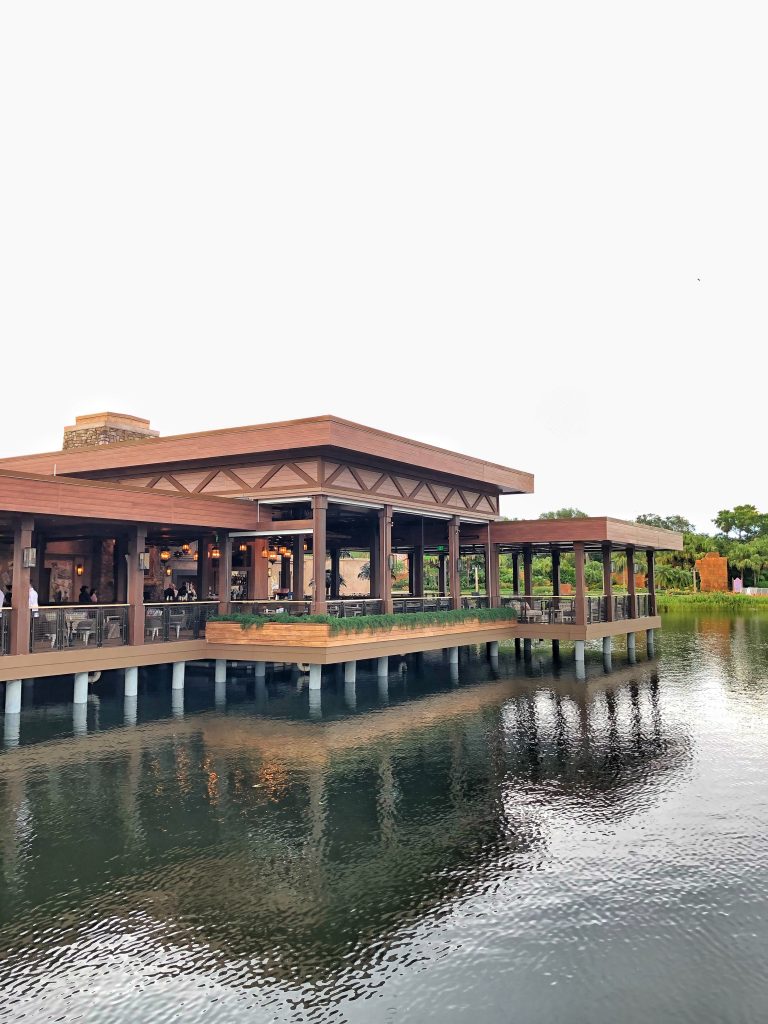 Three Bridges Bar & Grill opened to guests in the Summer of 2019. 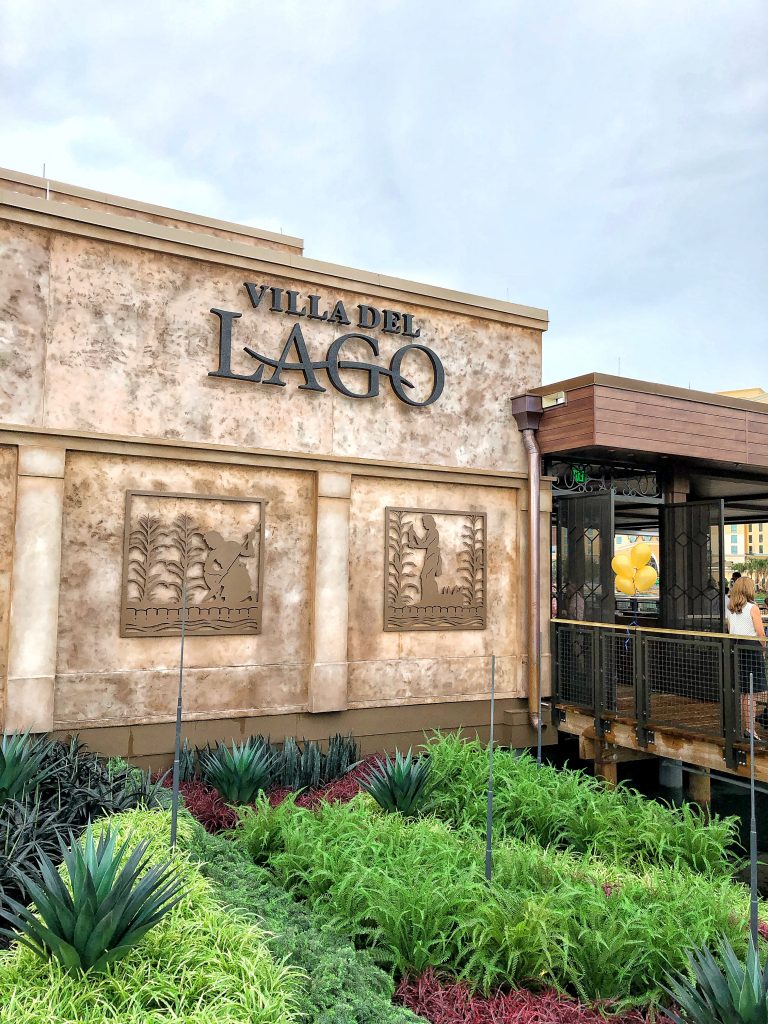 Three Bridges Bar & Grill takes its name from its location. The restaurant sits at the convergence of thee three bridges that span lake Lago Dorado on an island known as Villa del Lago. These three bridges connect the respective sections of Coronado Springs including the Casitas, the Ranchos & Cabanas and El Centro.

Three Bridges is an open air eatery which offers panoramic views of the resort. If  I had to compare it to another Walt Disney World restaurant, I would have to say it is closest to Geyser Point Bar & Grill at Disney’s Wilderness Lodge. And much like Geyser Point, this location will not be taking Advanced Dining Reservations. It’s first come, first served. Current hours of operation during this soft opening are 4:30pm – midnight.

The restaurant has three distinct sections. Three Bridges Bar & Grill is the centerpiece where the main bar is located. 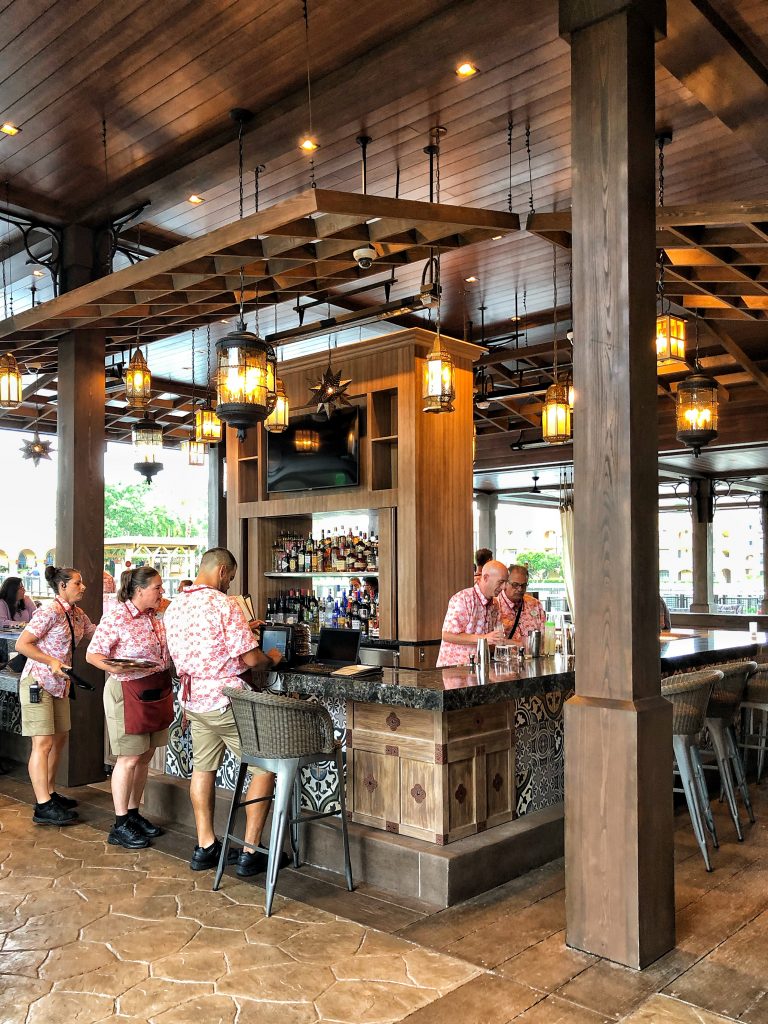 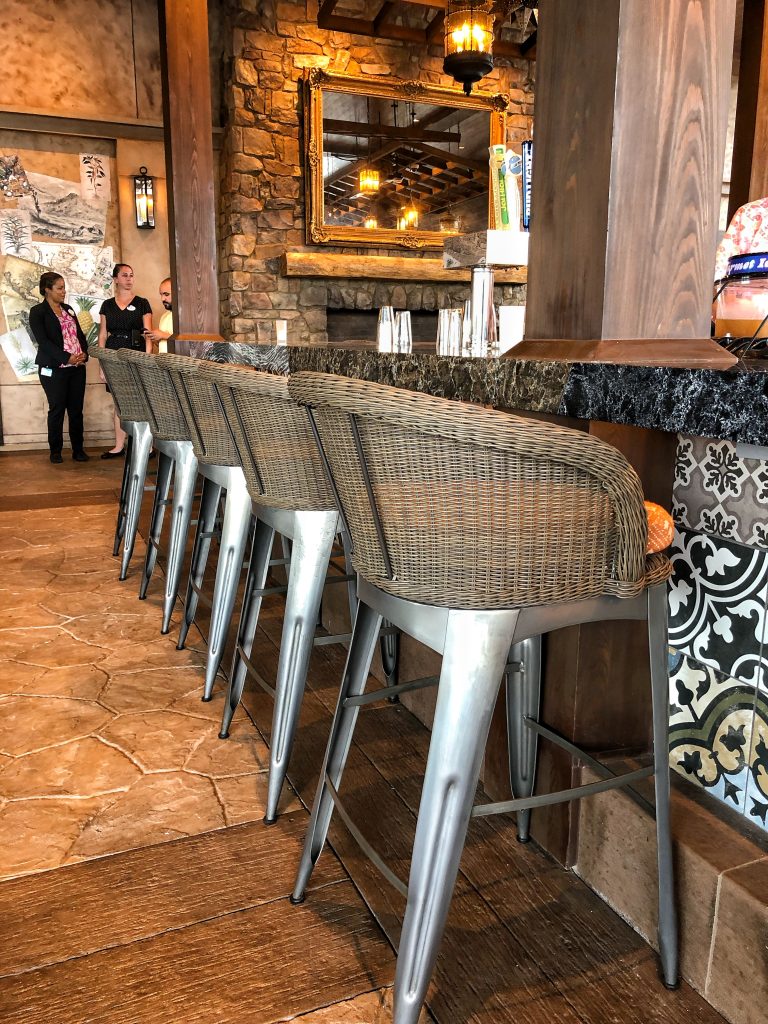 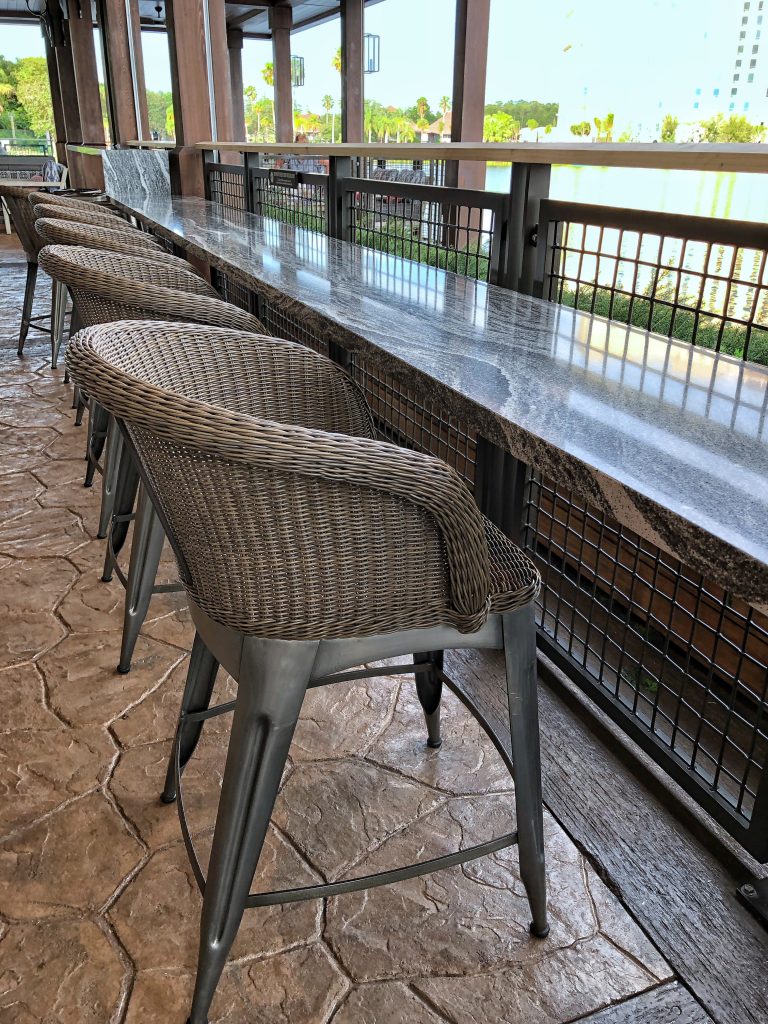 The section closest to the main entryway is called the Art Garden. 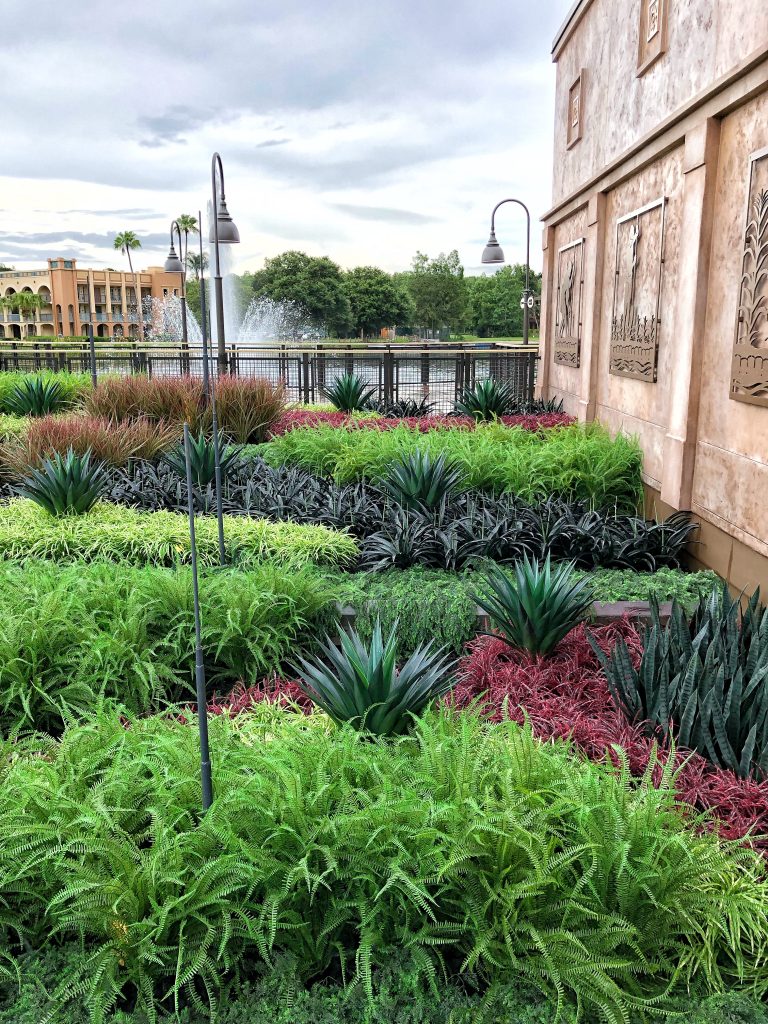 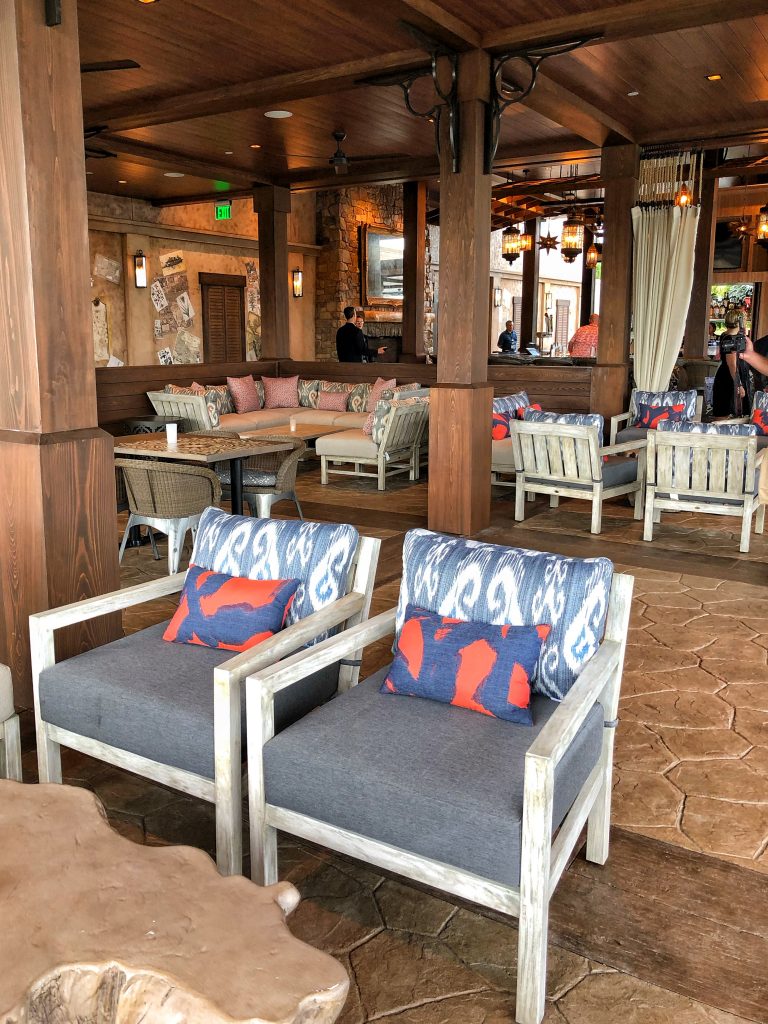 On the other side of the bar is the area known as Palm Court. 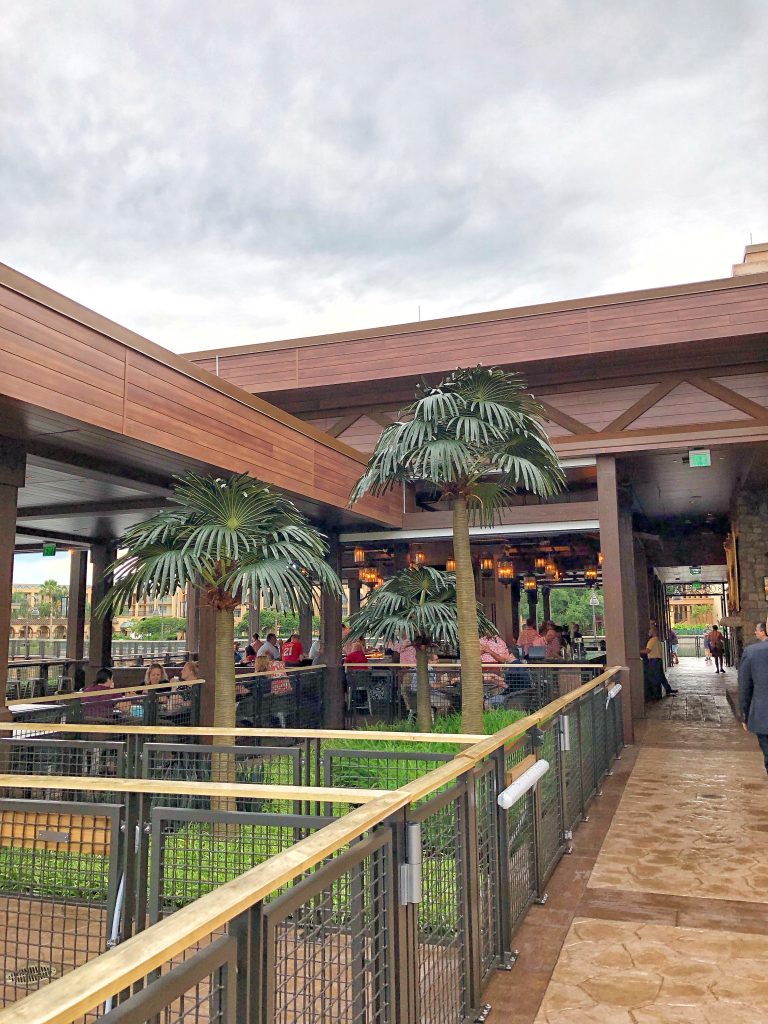 The seating options in Palm Court are similar to Art Garden with views overlooking The Dig Site, home to the Lost City of Cibola pool. 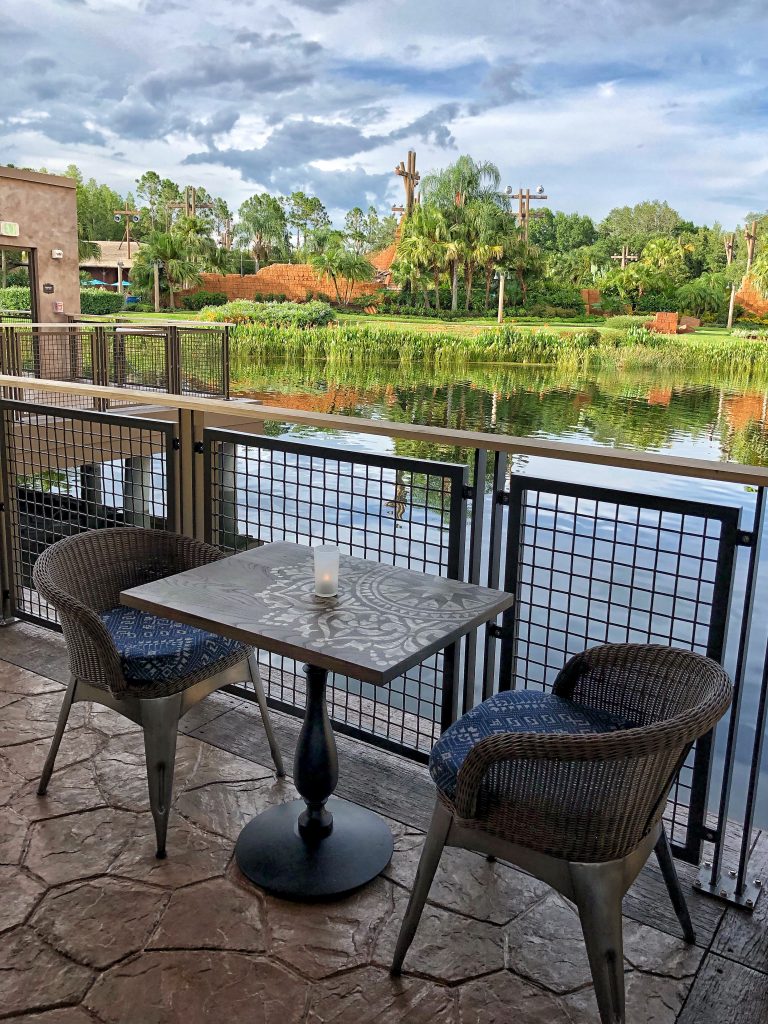 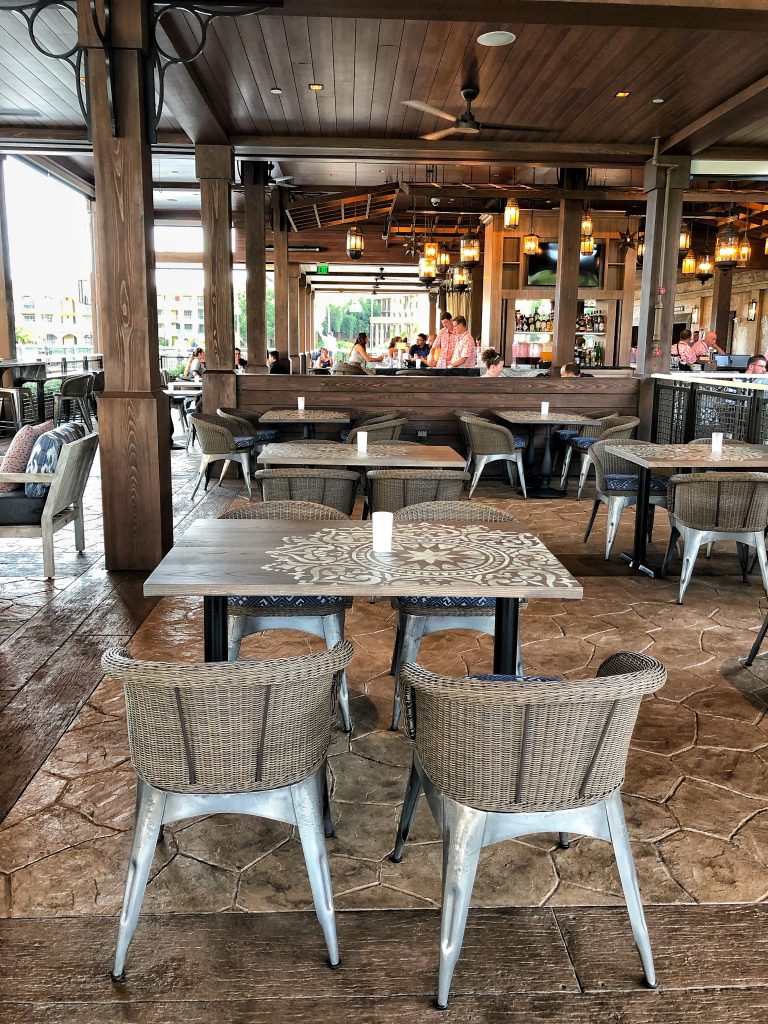 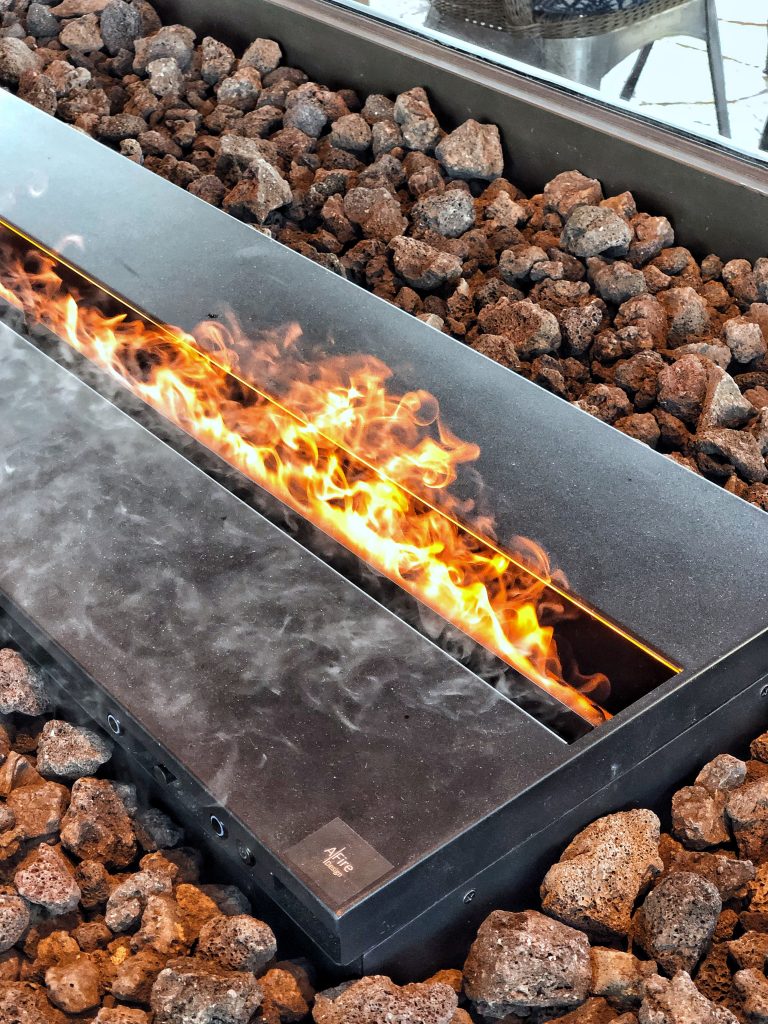 The walls are plastered with navigational maps and comics depicting  Scrooge, Donald, Huey, Dewey and Louie. 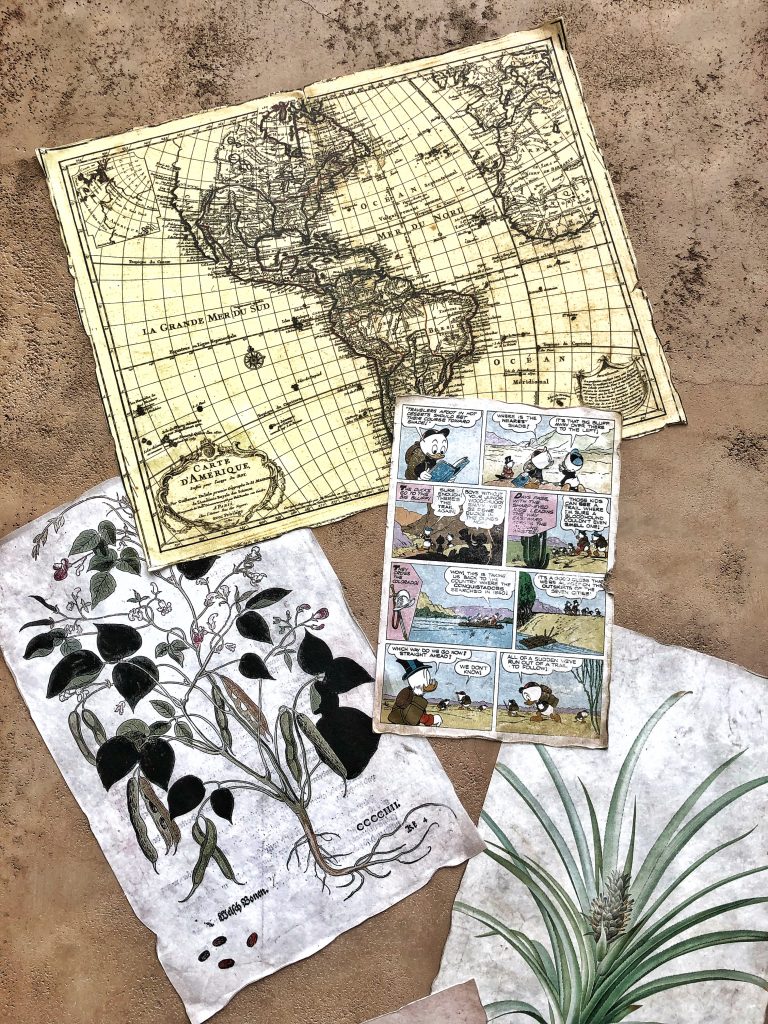 Because Coronado Springs Resort is a huge convention resort, it’s a possibility that either sections of Villa Del Lago could be bought out for convention purposes.

Now that you’ve gotten the full tour, let’s move on to the food shall we?

As mentioned, the vegan menu at Three Bridges has changed a bit recently. The stuffed mushrooms were replaced briefly by albondigas, and now a new vegan Poke Bowl takes center stage. 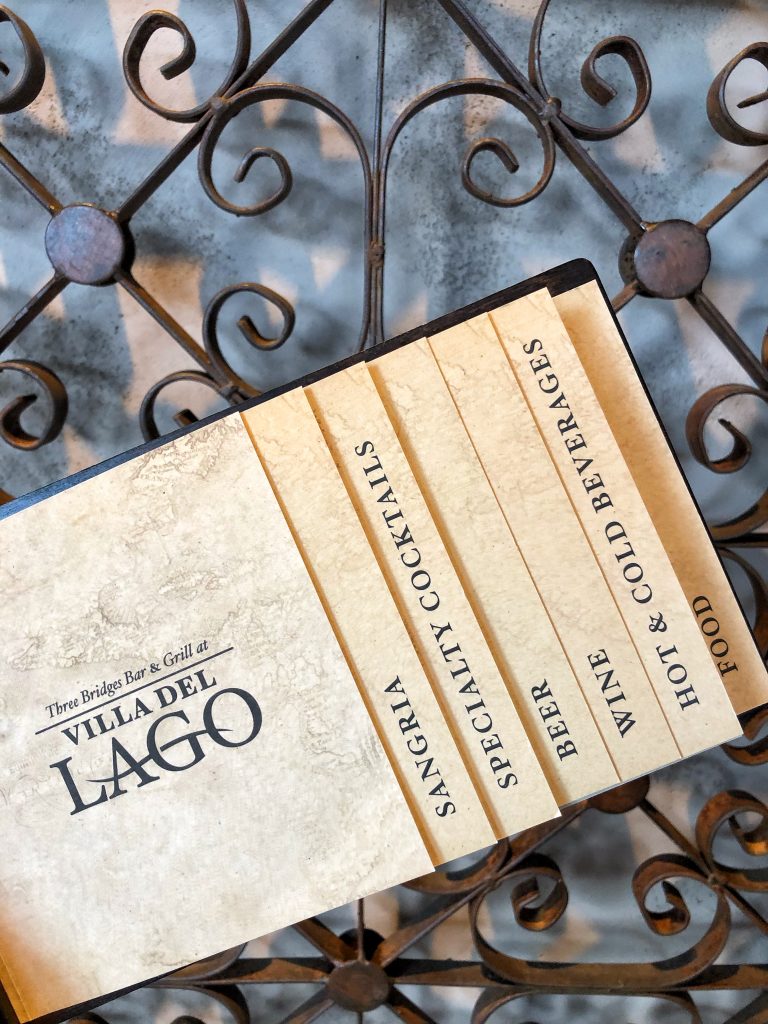 We started dinner service off with two of the restaurant’s signature Zero Proof Cocktails.

Here you have the Berry Mint Smash ($5.49) made with strawberry, blackberry, lime, mint and soda water and the La Granada Spritz ($5.49) with Odwalla pomegranate limeade, prickly pear, lemon and soda water.

The Berry Mint Smash was tart and the La Granada Spritz was more sweet. 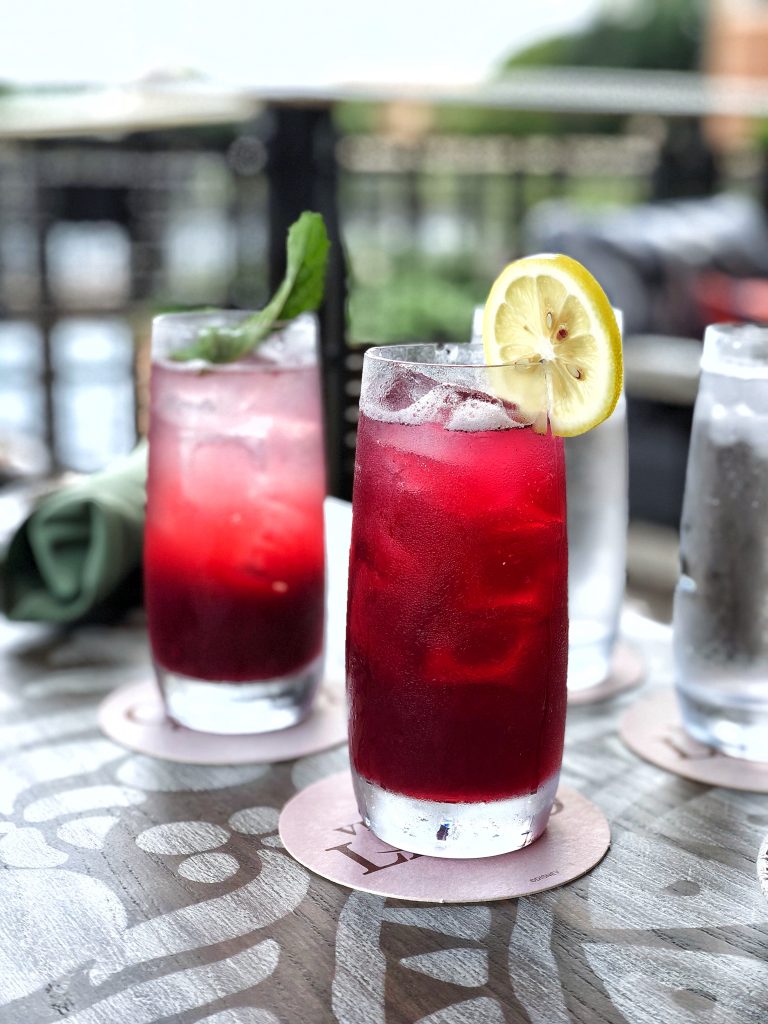 You can now get House-made Guacamole, served with tortilla chips and tajin for $12.

Next up is the modified Curry Hummus ($12) topped with harissa, micro greens and toasted pumpkin seeds. Just omit the tzatziki and opt for tortilla chips in lieu of the naan bread which contains dairy. 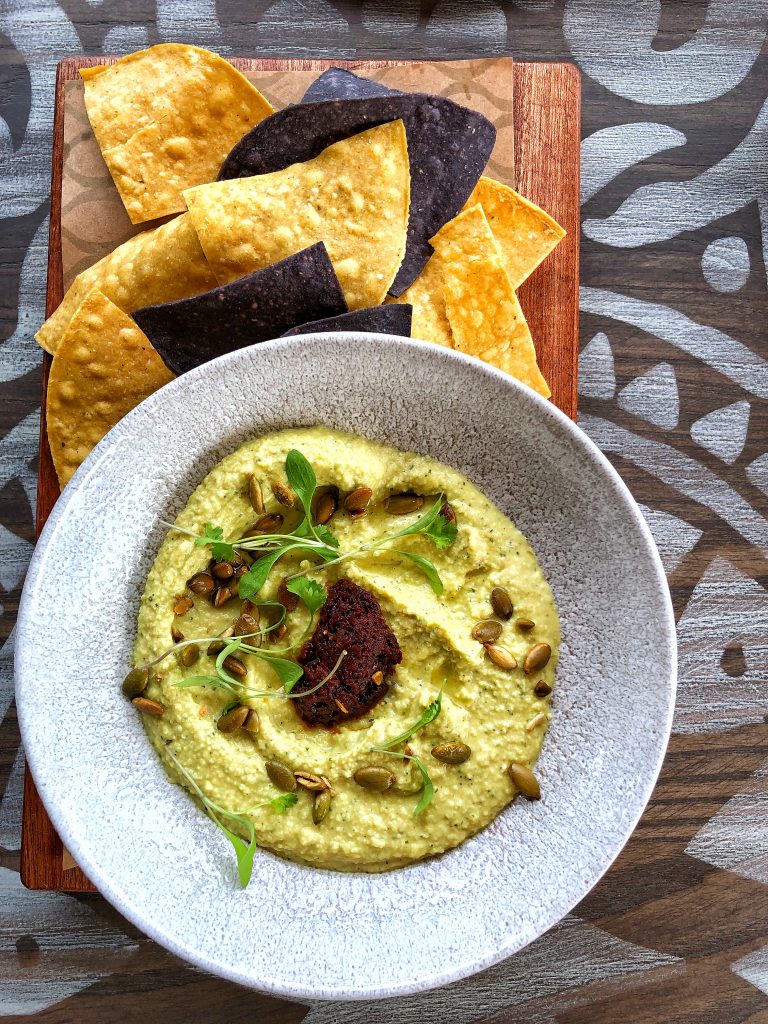 Be sure to blend the harissa in with the hummus before dipping as it is fairly spicy. Loved this dish and am so happy the naan wasn’t vegan because the crispy chips were sensational with it. 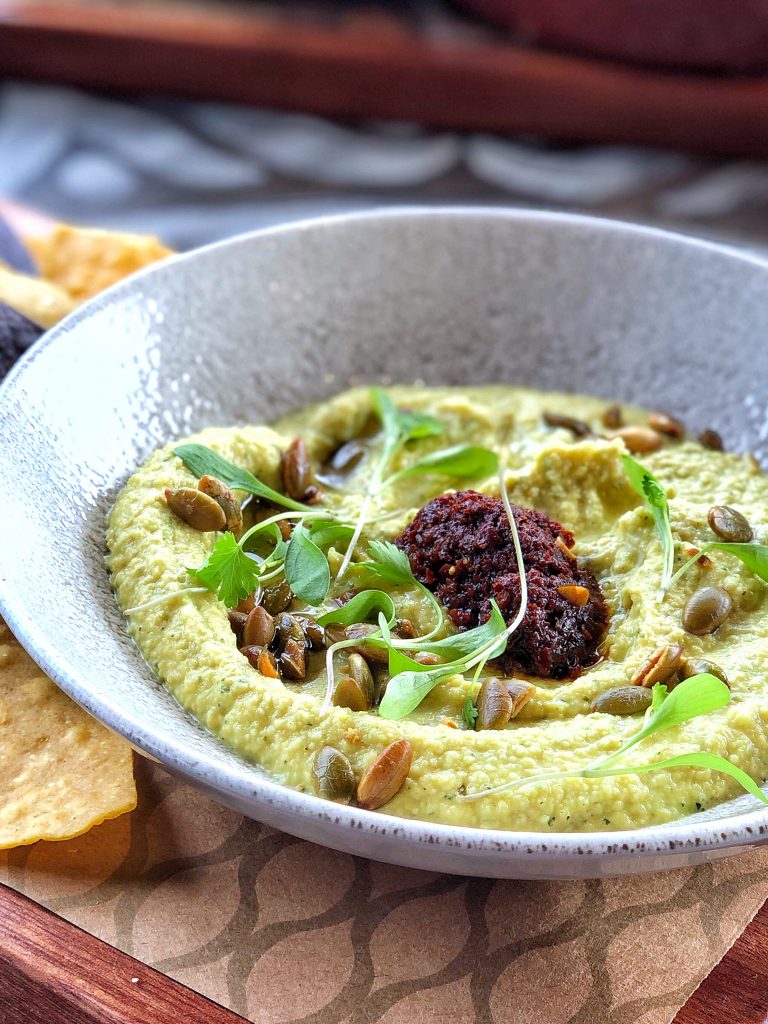 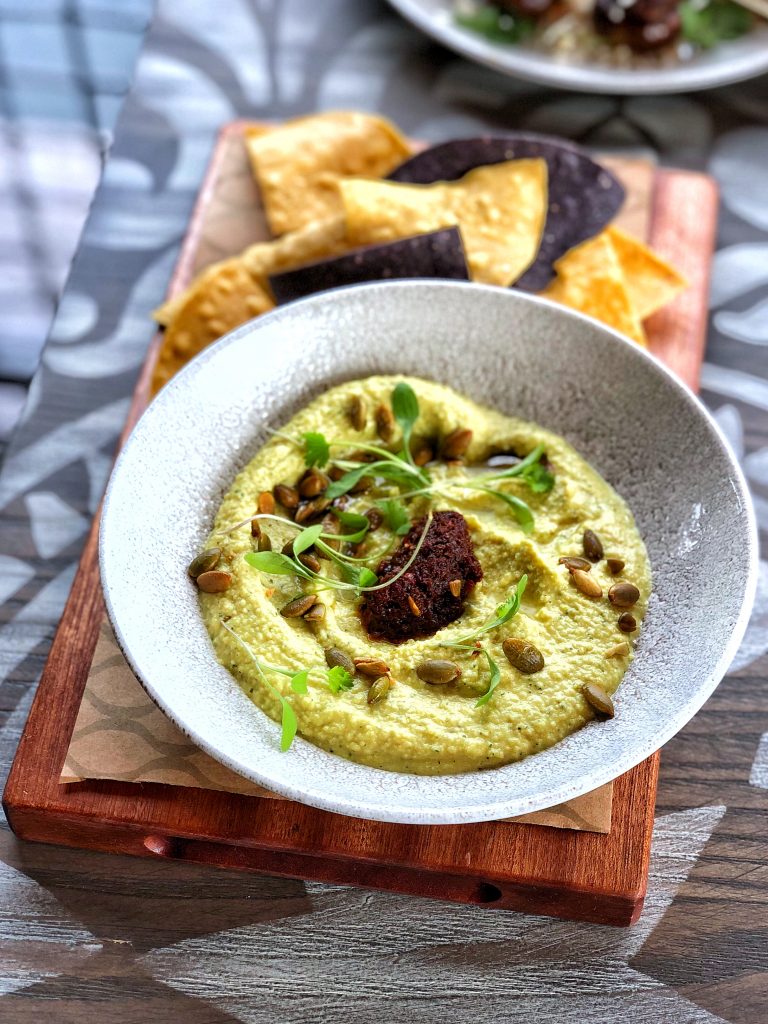 Also available now at Three Bridges Bar & Grill is the Pan con Tomate for $10, which is a Spanish version of bruschetta which we’ve had at Toledo and Jaleo before and LOVED.

Another amazing item at Three Bridges Bar and Grill is the Roasted Corn Dip – $12.  This used to be a modifiable secret menu item, but is now completely vegan as-is!

It’s a mix of whole roasted grilled corn that has been cut off the cob with a smoked tomato vegan aioli topped with Follow Your Heart parmesan cheese. 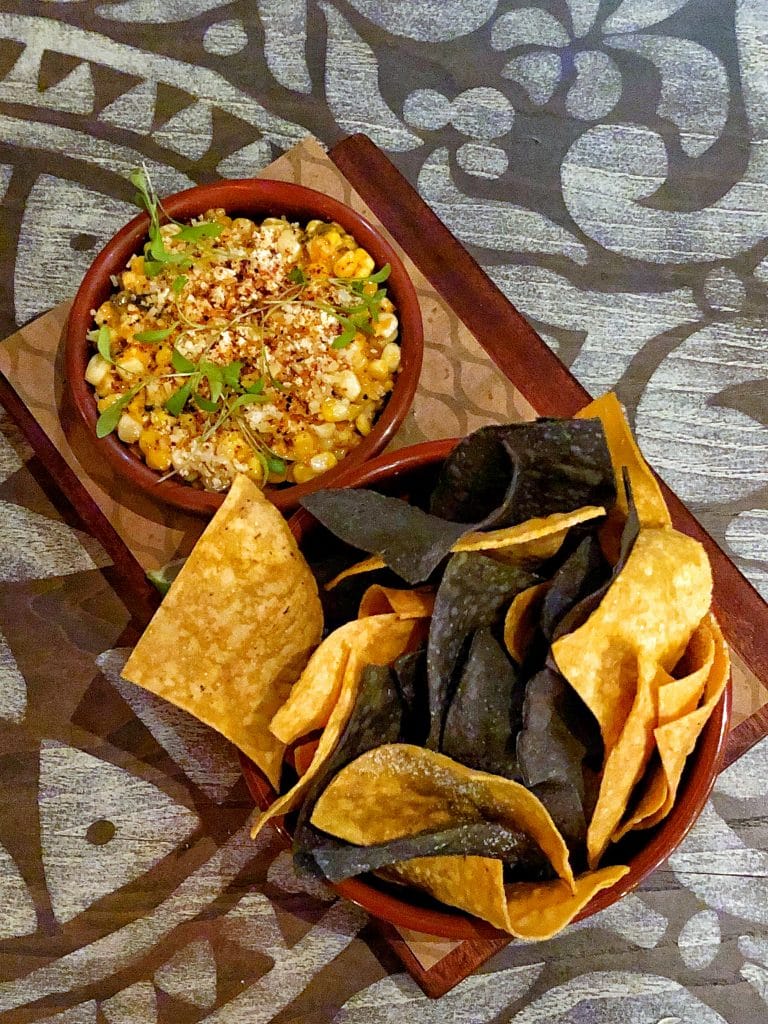 Oh…and don’t sleep on the Smoked Paprika Fries! You can even ask to have them fried in the dedicated gluten free allergy fryer if you’re concerned about fryer cross contamination. The only other thing fried in that dedicated allergy fryer are the corn chips. 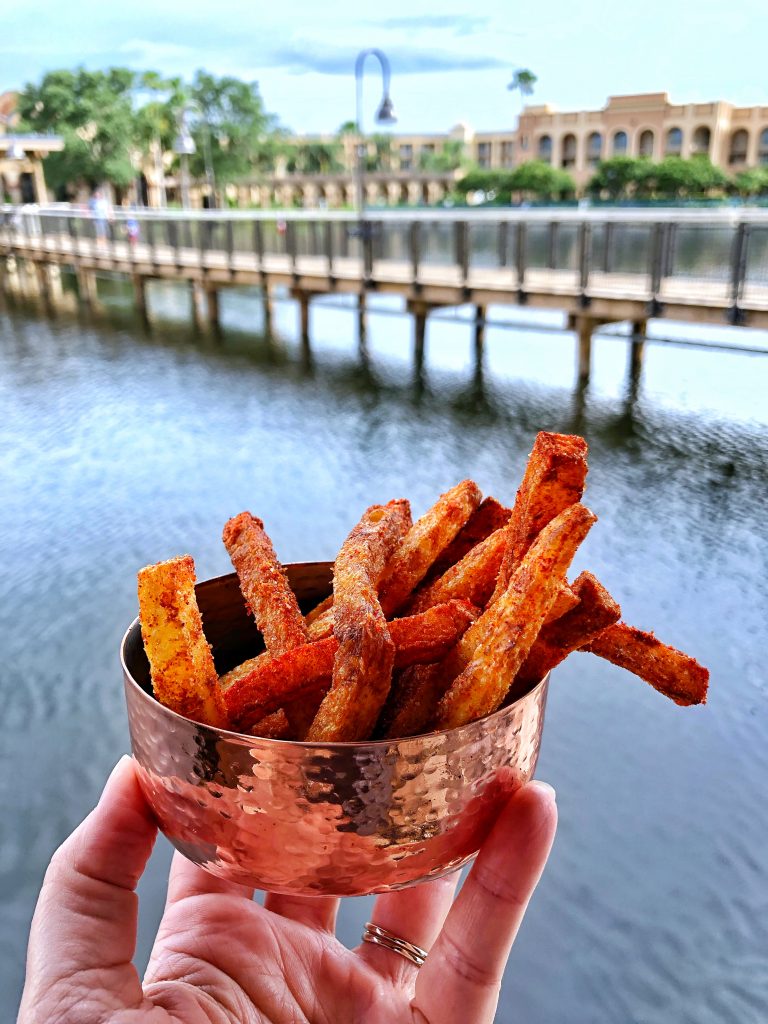 Moving on to the vegan entree options… first up …a salad. I know…salad….but this one has taters.

This is the Villa del Lago Salad ($13) which is a mix of arugula and frisée tossed with warm Yukon potatoes, white beans, and a sherry vinaigrette. 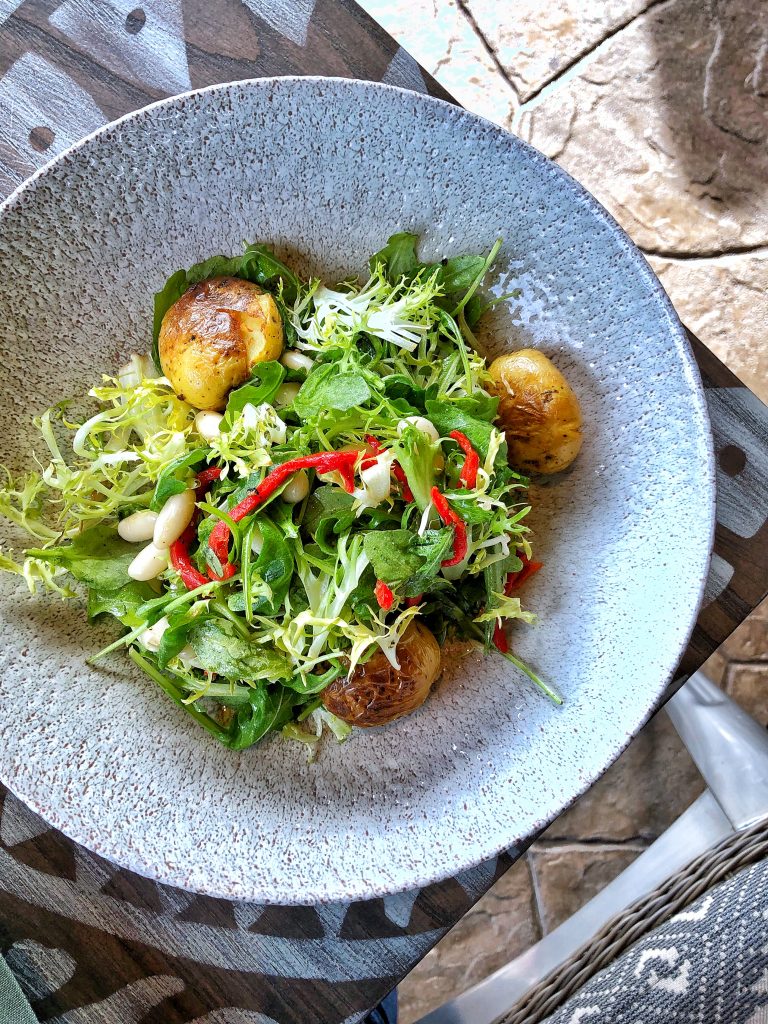 I wouldn’t necessarily call this an entrée salad, but hey I eat family sized salads. If you’re hungry I think you definitely are going to want to order one of the appetizers to pair with this. 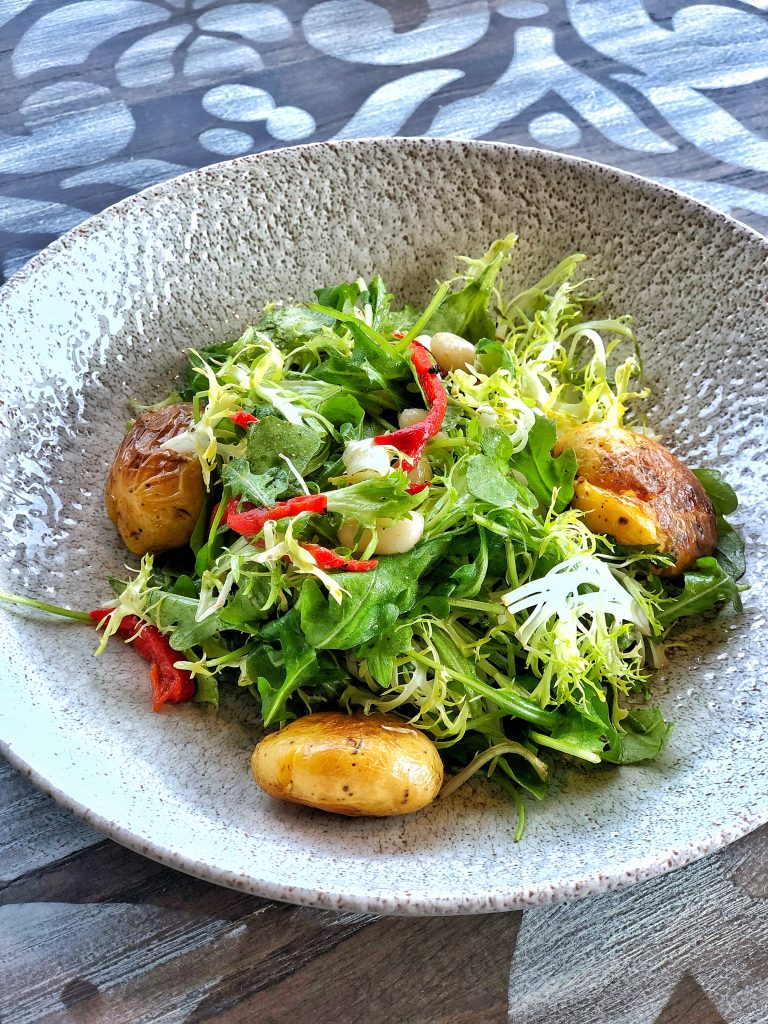 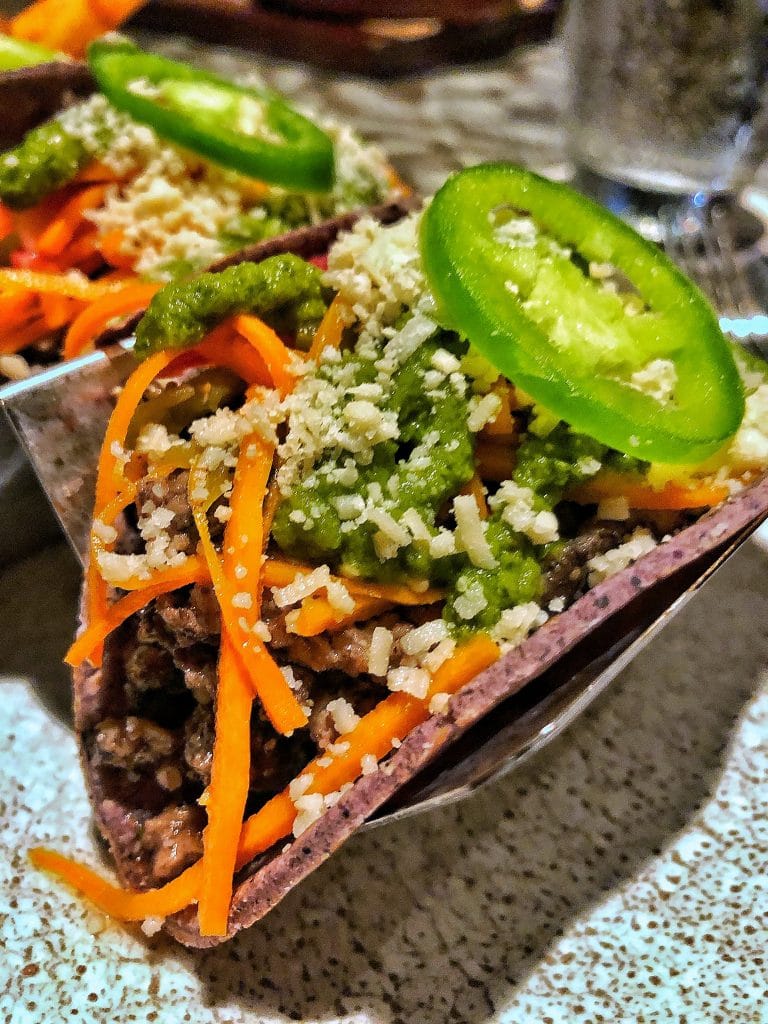 The restaurant is making blue corn tortillas in-house. The tortilla shells get a filling of seasoned Impossible meat, a radish and carrot slaw, salsa verde, a single jalapeño slice and vegan cheese.

They’re served with fruit or smoked paprika fries and you can even request a vegan aïoli for dipping the fries into! 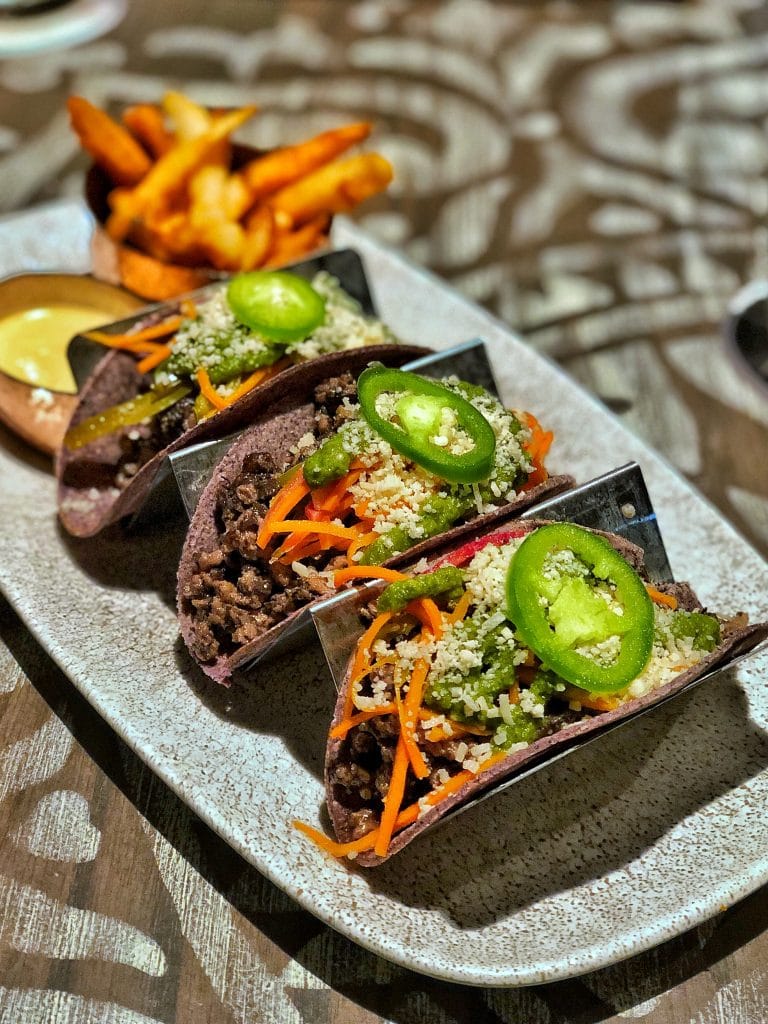 New on the menu is the Vegan Poke Bowl for $15 which you can click to read about. It looks amazing!

You could also ask for the plant-based Impossible meatballs on the kids menu, served with chili sauce and vegan Parmesan cheese.

For dessert right now they have seasonal fruit sorbet. Perhaps they’ll add something more in the future.

We really enjoyed our experience at Three Bridges Bar & Grill at Villa del Lago. Keep in mind that dining here is al fresco.

Three Bridges Bar & Grill at Villa del Lago in Disney’s Coronado Springs Resort is a great option – and don’t forget the check out Sangria University too!

WANT TO REMEMBER THIS OPTION? Save the “What’s Vegan at Three Bridges Bar & Grill at Villa del Lago in Disney’s Coronado Springs Resort” pin to your favorite Pinterest board.