Disney Cruise Line recently revealed some new details about the newest ship on the horizon, the Disney Wish. Sailing for the first time in July 2022, it was recently posted by Forbes that the Disney Wish will be one of the first Disney cruises to offer vegan menus as part of the regular dining options on board. Now that a few cruises have sailed, we have some menu items to share with you. This guide below is constantly being updated as friends of the site are sailing so be sure to bookmark this page and check back before you sail! 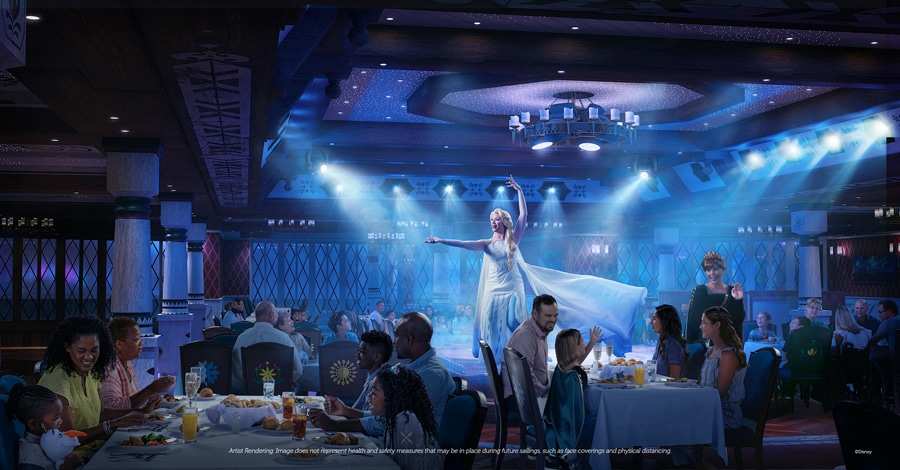 With the Disney Wish, we’ll get a new high-end dining experience, Enchante. In addition, there will be 3 additional rotating dining locations: Arendelle – a Frozen Dining Adventure, Worlds of Marvel dining experience, and 1923 a golden age of Hollywood-themed dining room.

According to the Disney Cruise Line, “Each and every one of our menus will have vegan offerings. Taking care of allergies and special requirements is extremely important to us. We want families to sail with peace of mind.” Therefore, they are going to ensure that there is something for everyone, and chefs aboard the Disney Cruise Line are incorporating vegan dishes as part of their menus. It’s important to Disney Cruise Line that vegans enjoy the fun-focused dining experiences without feeling at all separate.

Prior to the cruise industry shutdown, DCL had been adding in vegan options to their existing menus. We reached out to Disney for comment and heard back with the following info:

The Disney Wish will actually have the same level of vegan offerings as the rest of our ships. We include vegan and vegetarian options on all of our main menus, rather than separate menus dedicated to those items. We also include options catered to common dietary needs and allergies, so every guest has delicious dishes to choose from.
More details will be released in the future specific to the menus onboard the Disney Wish.

So there you have it. As mentioned above, this process was already underway, and will continue with the Disney Wish. Having these permanent across the board and at every main dining location, will be a welcomed “new normal.” Of course cruise lines like Virgin Voyages are breaking the mold of traditional cruising and offering an entirely vegan dining location on their new ships. We hope Disney will make even more attempts to increase vegan options and continue their sustainability efforts. 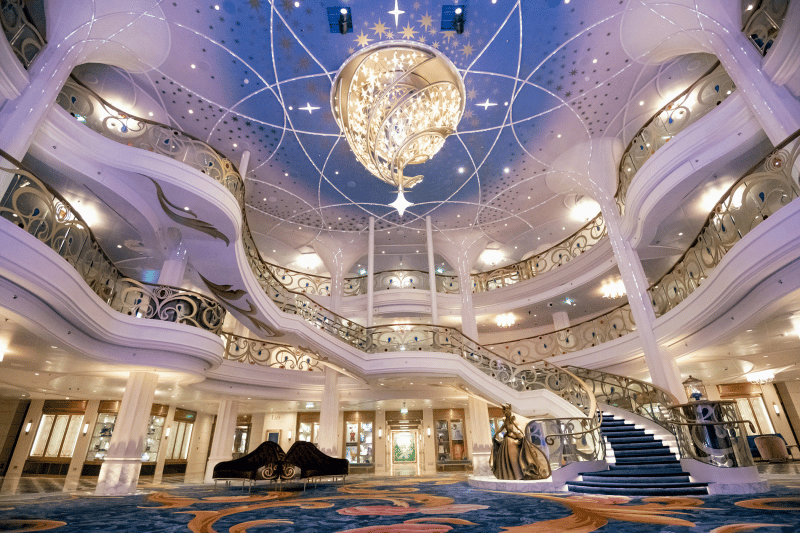 Now let’s get to the vegan menu options! Thank you to LaughingPlace.com for sharing the menu info. We will update this page as readers send in photos from their cruises, and on our upcoming cruise in September we will of course be sharing our photos and videos of ALL the vegan options.

Having not been on the ship yet myself, I don’t know if this is because none of the media on board were asking about vegan options, or they aren’t yet noted, or they won’t be. Again, we’ll update as we know more, so follow us on social media for any updates to this post. For the menu items below, we will be sharing what we *assume* can be made vegan from the vegetarian sounding items, or what we know to be vegan from those who’ve sailed. This will not be confirmed until we can learn more, so if you are sailing before that, be sure to check with a chef or your server to confirm what you can safely eat.

Here are the confirmed and potentially vegan menu items for the Disney Wish on the three main restaurants and room service. The confirmed vegan items and photos below are from our friends at @TheDisneyFox (owners of ParkCandy.com – use code ZANNA for 10% off!). Huge thanks to Carise for sending these gorgeous photos over! 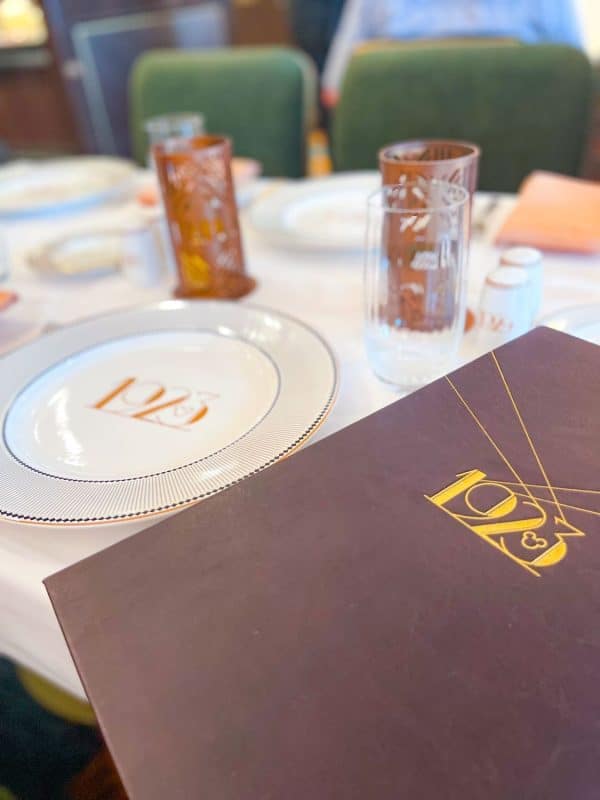 Fennel, Bartlett Pear, and Tatsoi Salad – manchego cheese, walnuts, sherry dressing (Gluten Free) – we assume this can be made without cheese, will have to confirm dressing ingredients

Split Napa Baby Romaine Lettuce – caesar dressing, heirloom grape tomatoes, parmigiano-reggiano, ciabatta garlic croutons – will have to check but most likely the dressing would not be vegan, perhaps the croutons too 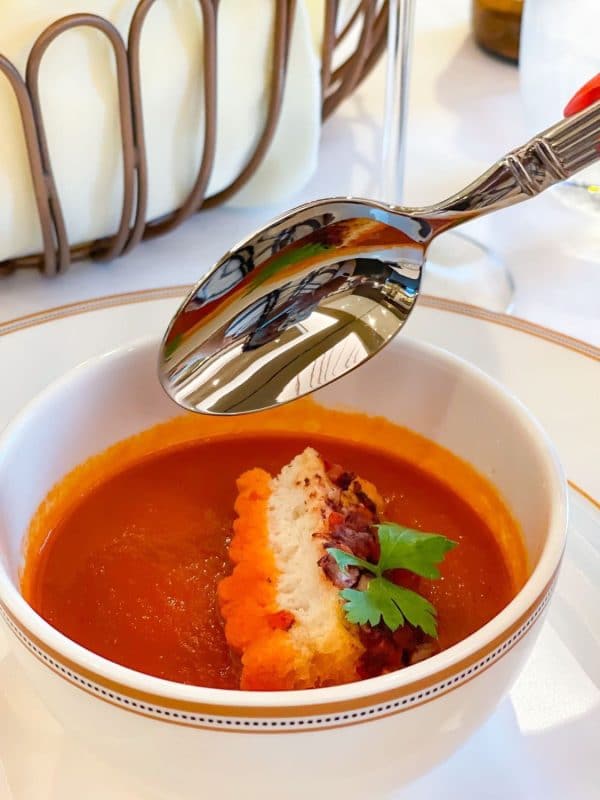 Fig and Olive Bread – with honey butter dip – Earth Balance should be available, will have to ask on the bread ingredients 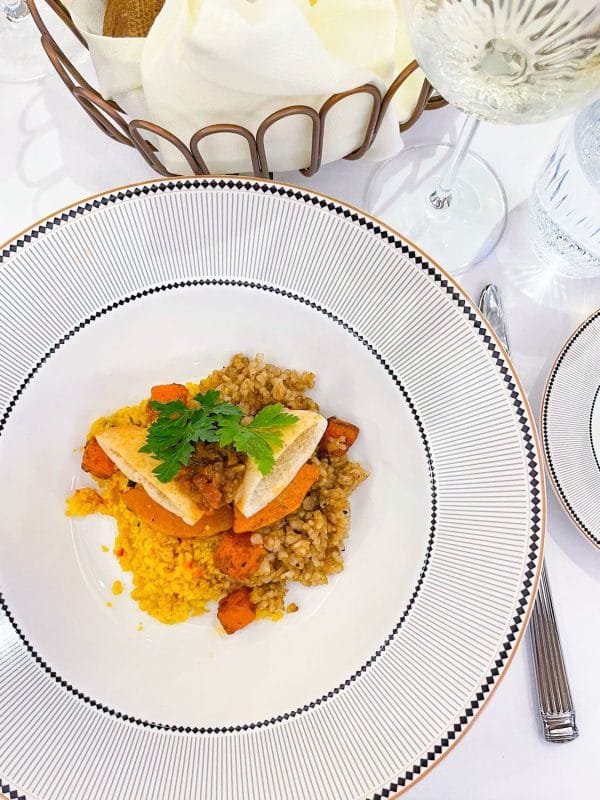 The yogurt comes on the side and you can pour it over the dish. Looks delicious – Carise reported that this was her favorite on board.

There should also be various side items that can be modified, and possible off-menu items as well 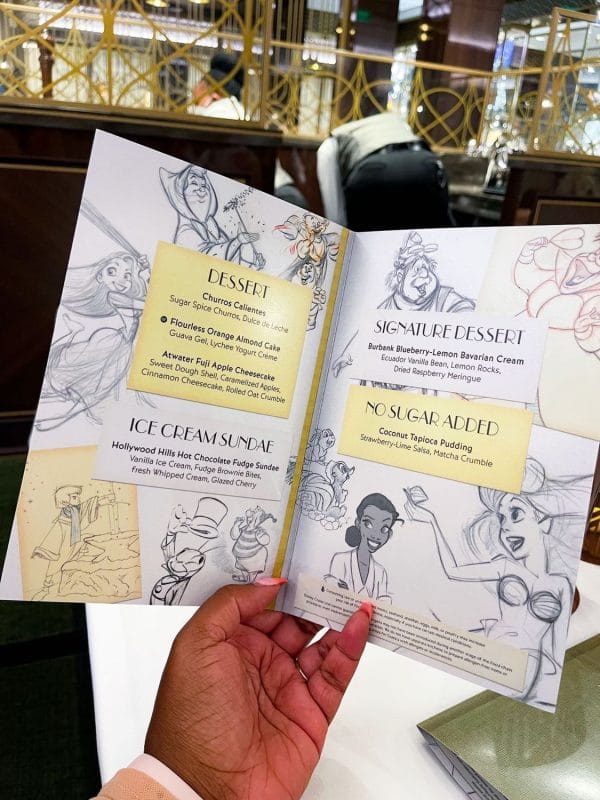 None of the on-menu desserts look vegan as is on the menu, however… 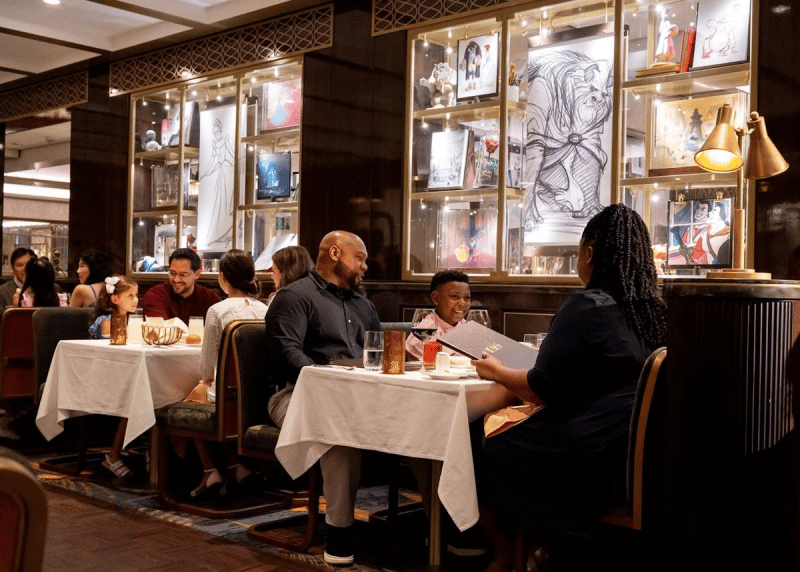 Coconut Tapioca Pudding – strawberry lime salsa, matcha crumble – this was able to be modified to be vegan. We are unsure if the chocolate ring is vegan, so we’ll check on that. 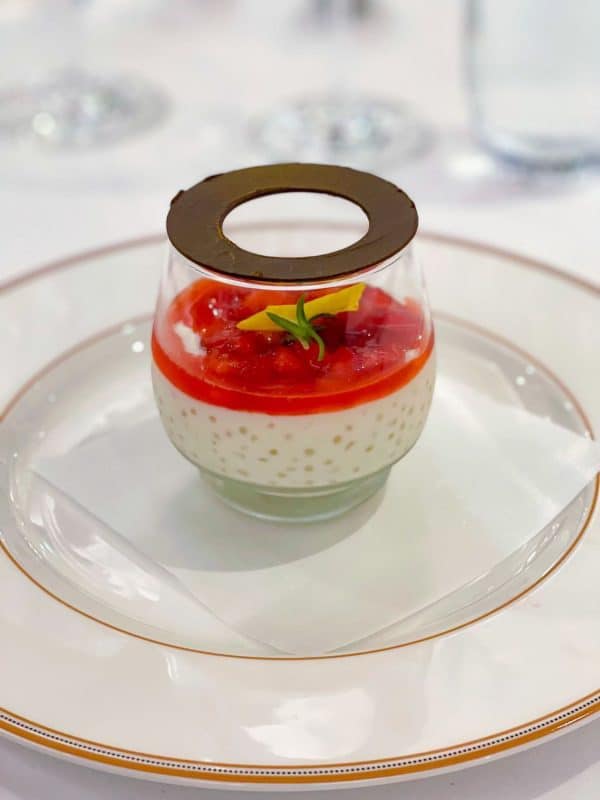 We have confirmed that the top chocolate ring is not vegan, so it would be served as it looks below for vegan cruisers:

In addition to dinner, there is a vegan lunch option at 1923 on the Disney Wish – an Impossible Burger with vegan garlic aioli: 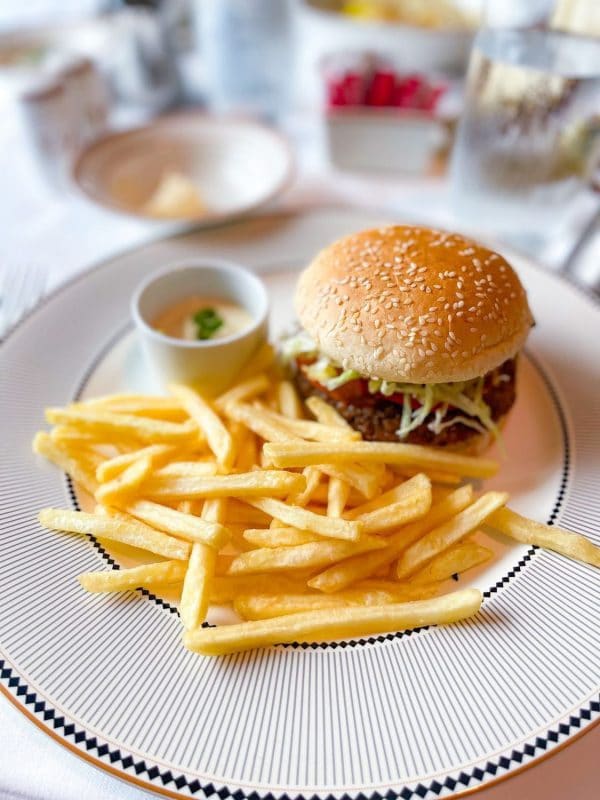 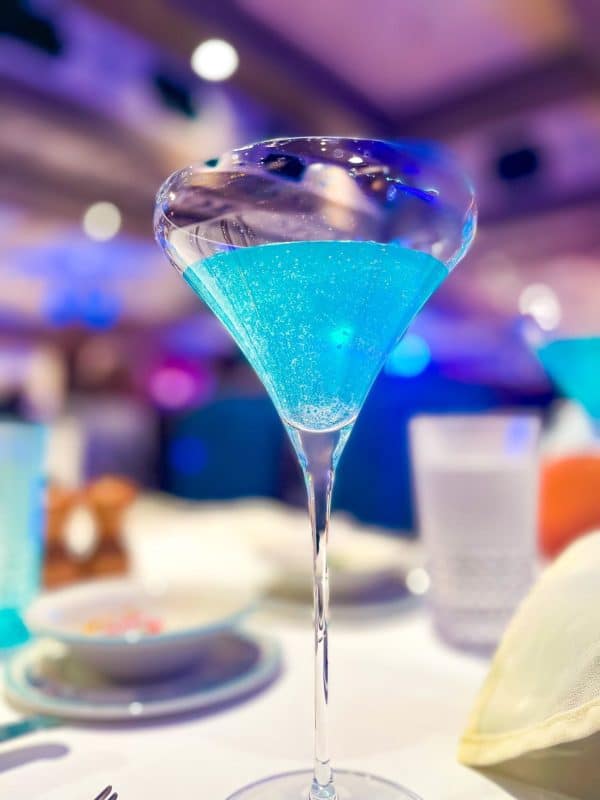 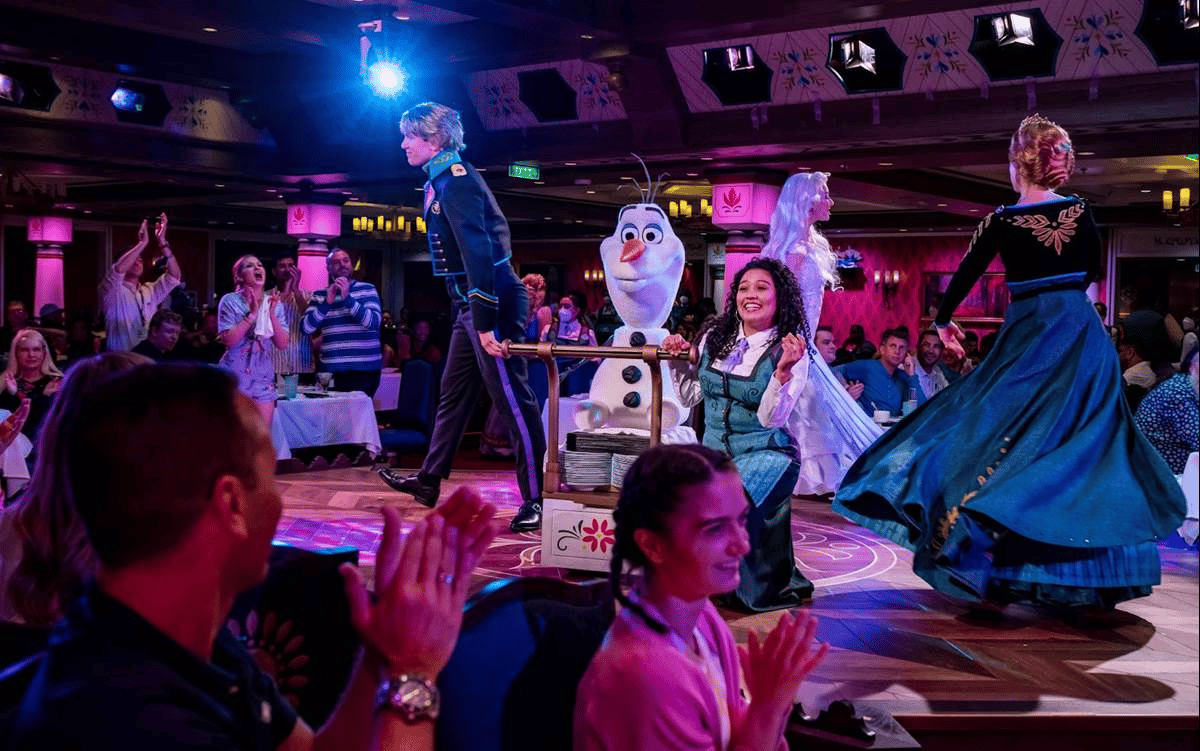 Queen Iduna’s Potato Lefse – Marjoram Butter Crust, Heirloom Carrots, Spinach, celeriac, green and white asparagus, baby brussels sprouts, leems, aquavit jarlsberg cream – this probably cannot be modified to be vegan due to the crust, but we will check when on board ourselves.

We didn’t see any potentially vegan dessert options listed, but Carise reports they had a vegan Carrot Cake: 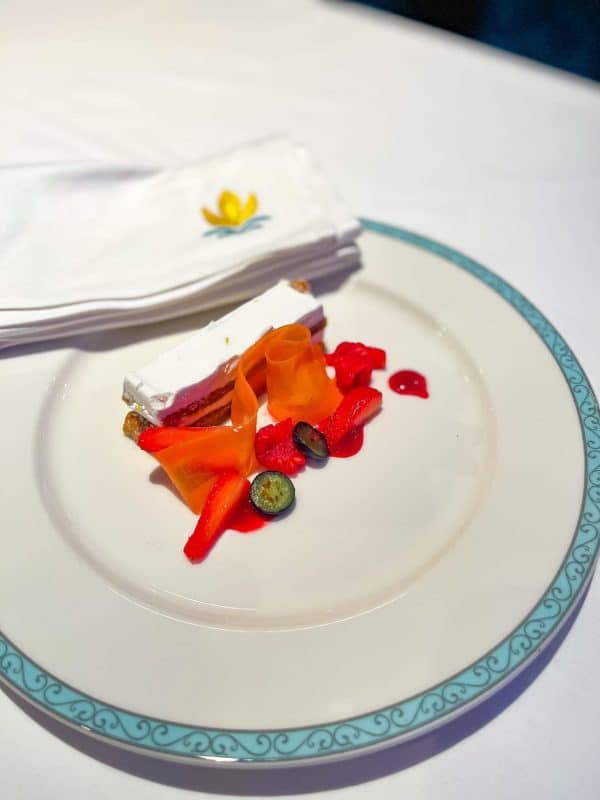 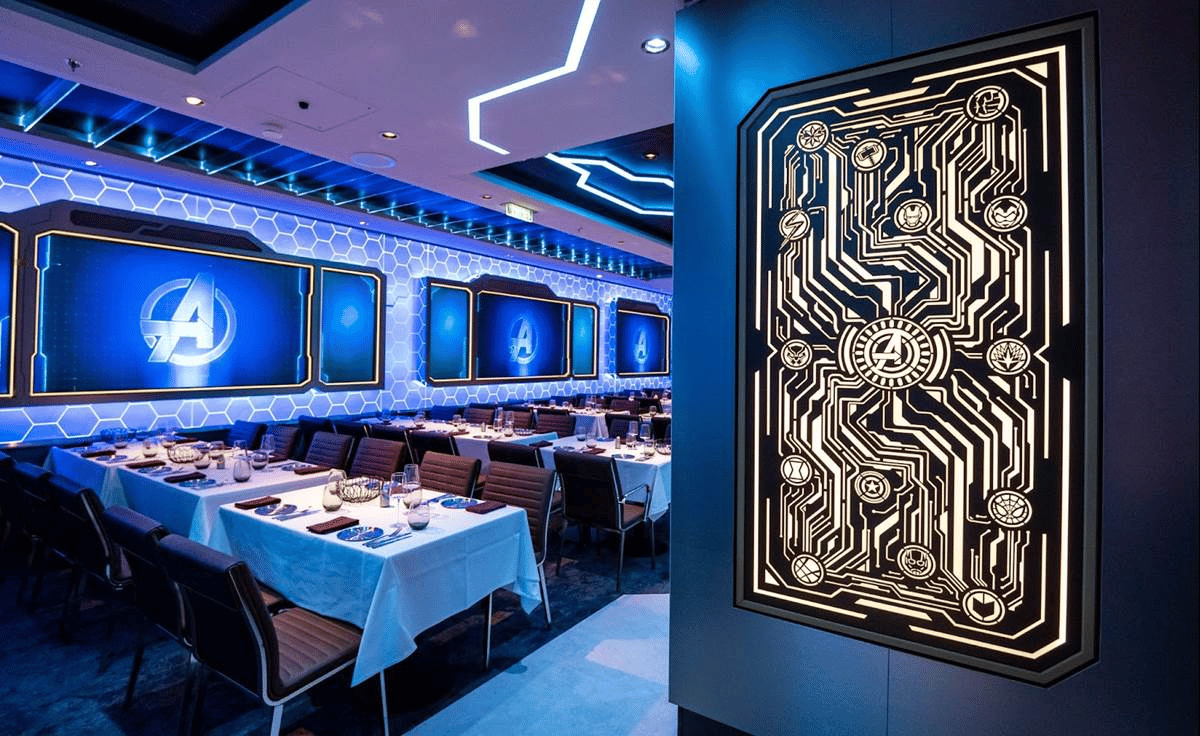 Hearts of Palm Ceviche – Tamarillo, sweet potato, purple onion, lime, cilantro, bell pepper, Infinity Stone popcorn (Gluten Free) – this should be vegan as is, would have to confirm ingredients

The above dish is slightly modified due to that guests’ allergy needs, missing is the sweet potato, red pepper, and popcorn, but it gives you an idea.

Iceberg Wedge – Candied pecans, smoked bacon lardons, black and globe radish, maytag blue cheese (gluten free) – not sure if this would be worth modifying, you’d have to remove the bacon and the blue cheese, and check on the candied pecan ingredients, so you may just end up with lettuce and radish.

Marble Loaf with red bell pepper dipping sauce – hopefully the bread service is vegan, will have to confirm

Ricotta Gnocchi – fontina cheese, caramelized grape tomato confit, broccoli rabe, arugula pesto – hopefully this can be modified to be vegan but if the gnocchi themselves are made with ricotta, we’re out of luck. Ask before ordering until we can confirm.

It does not appear that there are any vegan-as-is desserts on the menu, but we assume there will be options available. 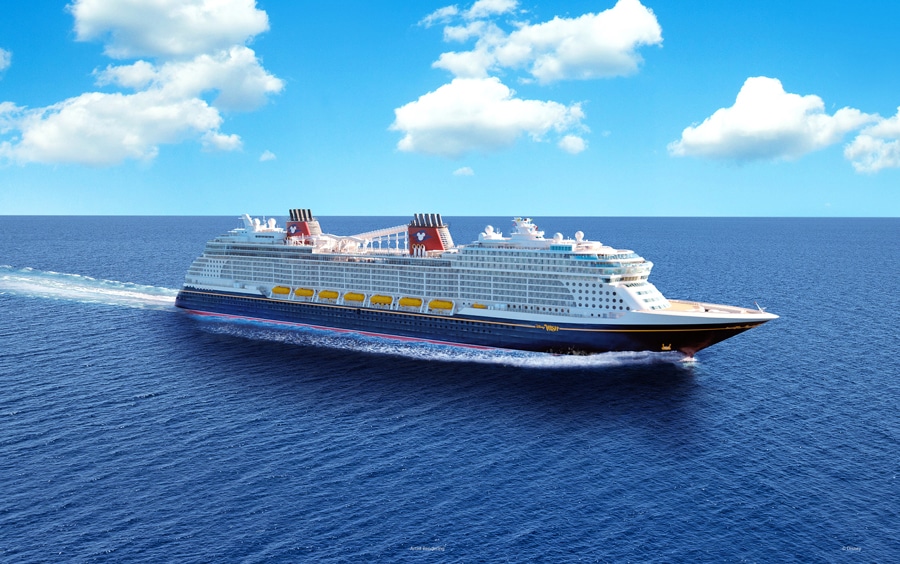 At the Keg and Compass lounge, our friend Cheryl was able to get Gardein Fish Filets and Chips! This is so wonderful to see, huge thanks to Cheryl for allowing us to share her photos on this guide.

The Quick Service locations for the Disney Wish are called Mickey’s Festival of Foods and include the following windows:

From the Daisy’s Pizza Pies on the Disney Wish, Carise was able to get a vegan sausage pizza. The crust is vegan as is, but a gluten-free crust is also available and is pictured below: 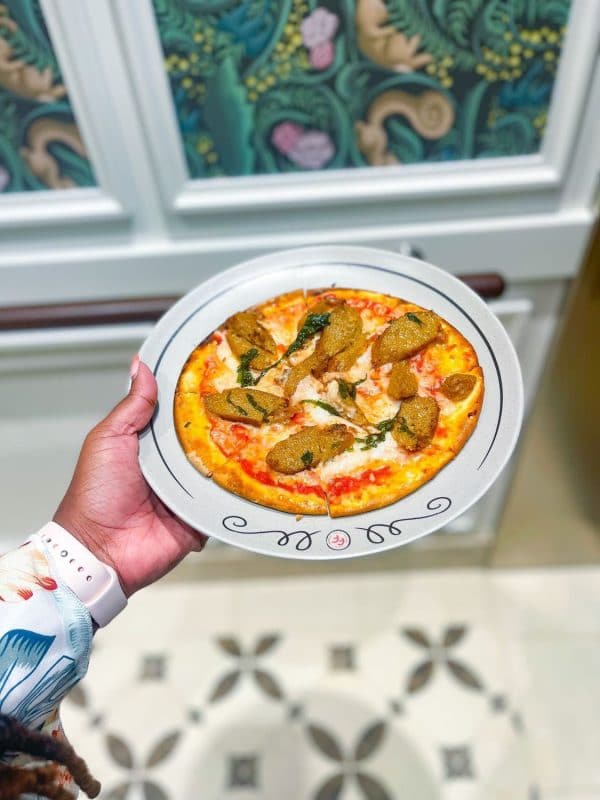 Follow Your Heart mozzarella is what was used for this pizza. Thanks again to Carise for sending over these photos of the vegan options on the Disney Wish!

It’s great to see that they have a plant-based sausage and burger from Goofy’s Grill! Here are the sweet potato fries Chef TJ enjoyed as well:

Crisp Plant-based Chicken Sandwich – on soft toasted bun, dill pickle, shaved iceberg lettuce, vidalia onions, plant-based garlic aioli and sweet potato fries – this is exciting! You can see below they are Gardein strips, and you must be sure to request a vegan bun, hopefully it will be standard in the future.

That’s all the vegan options on Disney Wish info we have at this time. We hope to get confirmed details either from Disney directly or by sailing ourselves soon.

If you are cruising soon, we’d love to share any photos or info you find out on board.

If you haven’t already, be sure to check out the details at our sister site, Zannaland.com’s Disney Wish Reveal post, and Disney Wish video highlights.