When you’re looking for a hearty, vegan stick to your ribs kind of meal in the Magic Kingdom head on over to Liberty Square. Here you will find the Liberty Tree Tavern, and while its not a tavern in the truest sense of the word where beer options tend to outnumber food options, it does have plant based options you need to try.

It’s called ‘A Salute to All Nations, But Mostly America.’ – Sam Eagle (the Muppets) 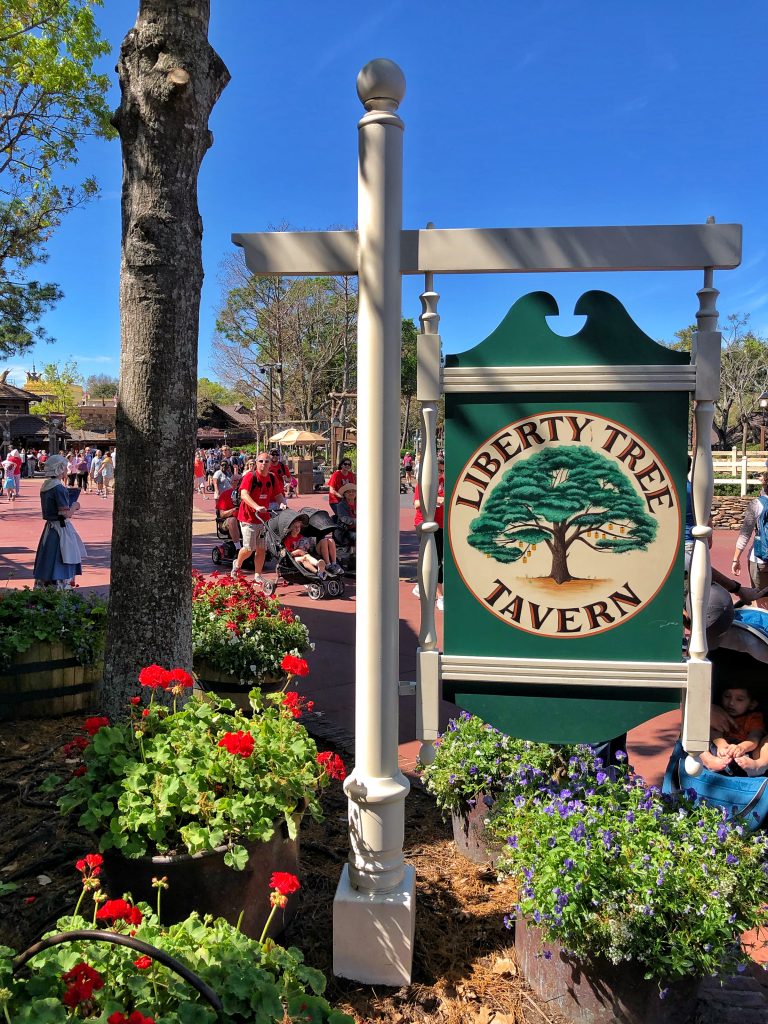 The Liberty Tree Tavern restaurant is located in Magic Kingdom’s Liberty Square adjacent to the Liberty Square Riverboat dock and The Hall of Presidents. The building itself is a stately colonial-style inn serving traditional New England-inspired fare. 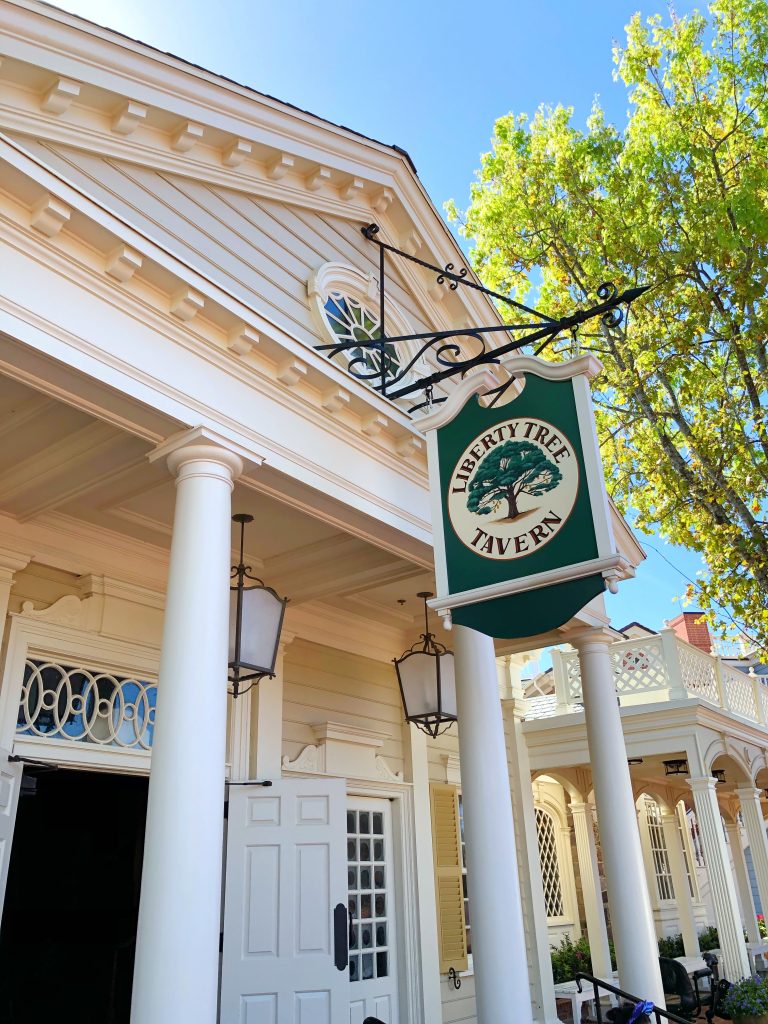 The restaurant is reminiscent of a Colonial Williamsburg estate with dark wood beams and period furnishings accented by brick fireplaces, wrought iron chandeliers and walls decorated with period photos. 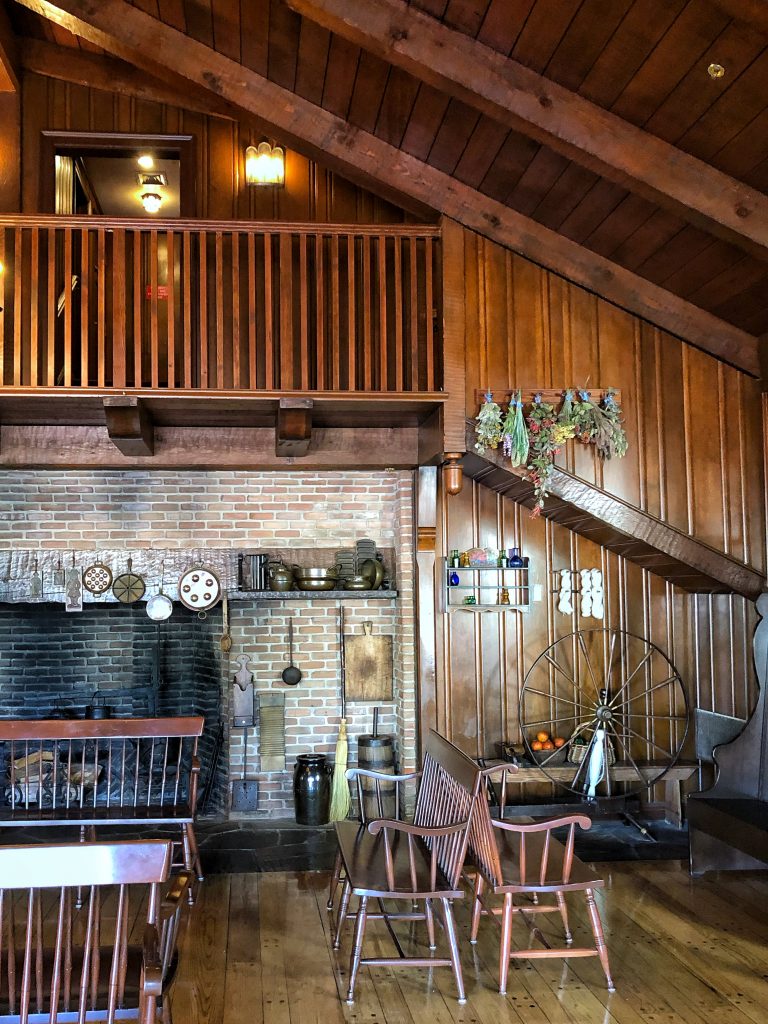 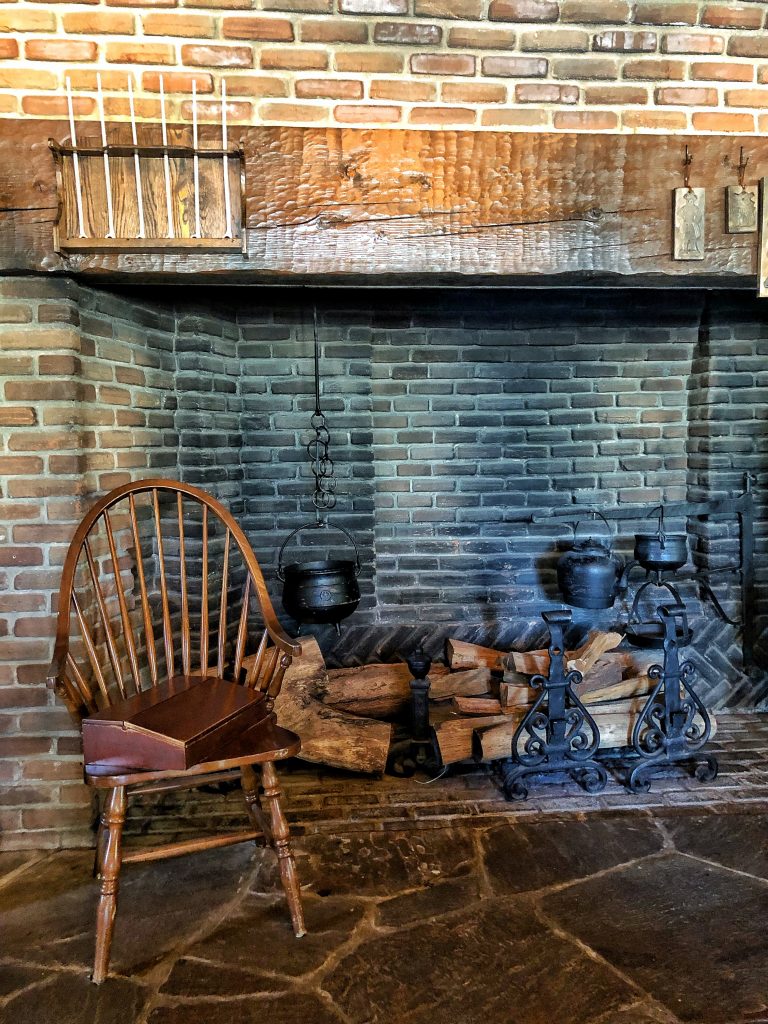 There are six distinct dining rooms all inspired by American heroes. Those rooms include:

On this particular day we were seated in the Jefferson dining room. 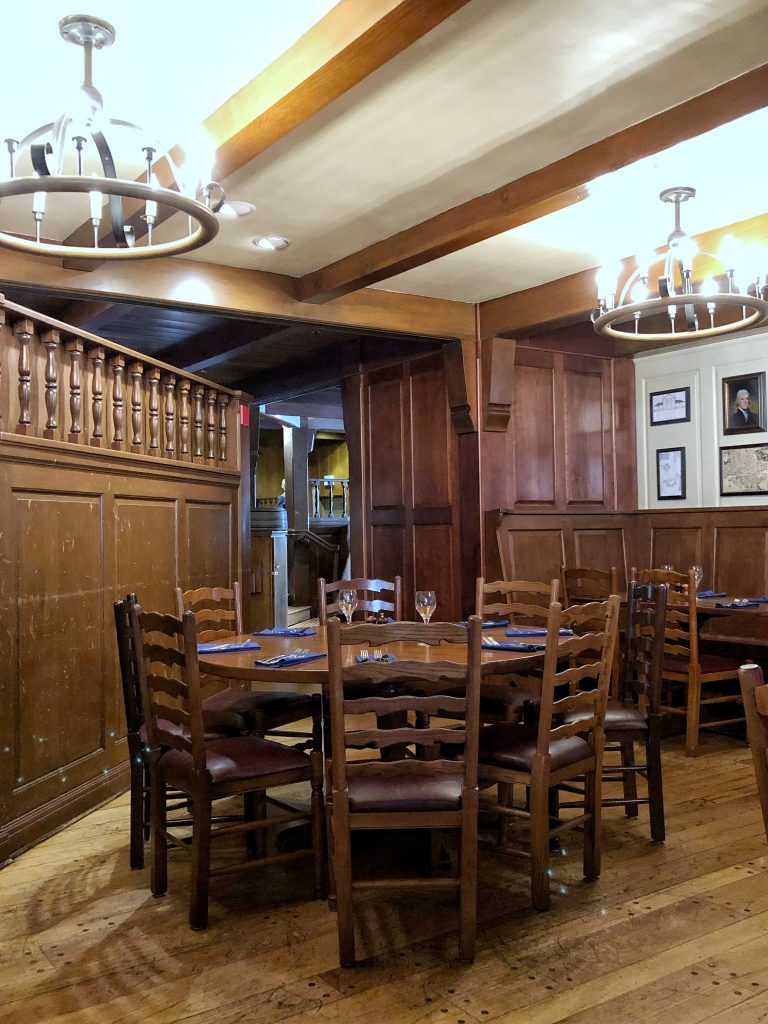 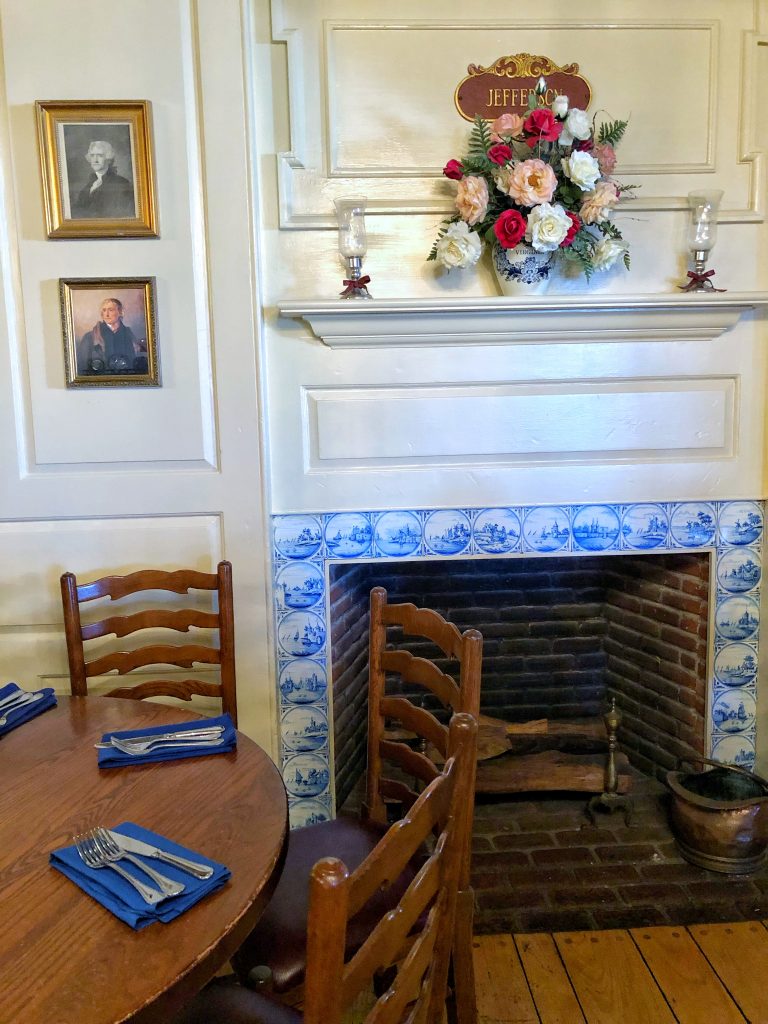 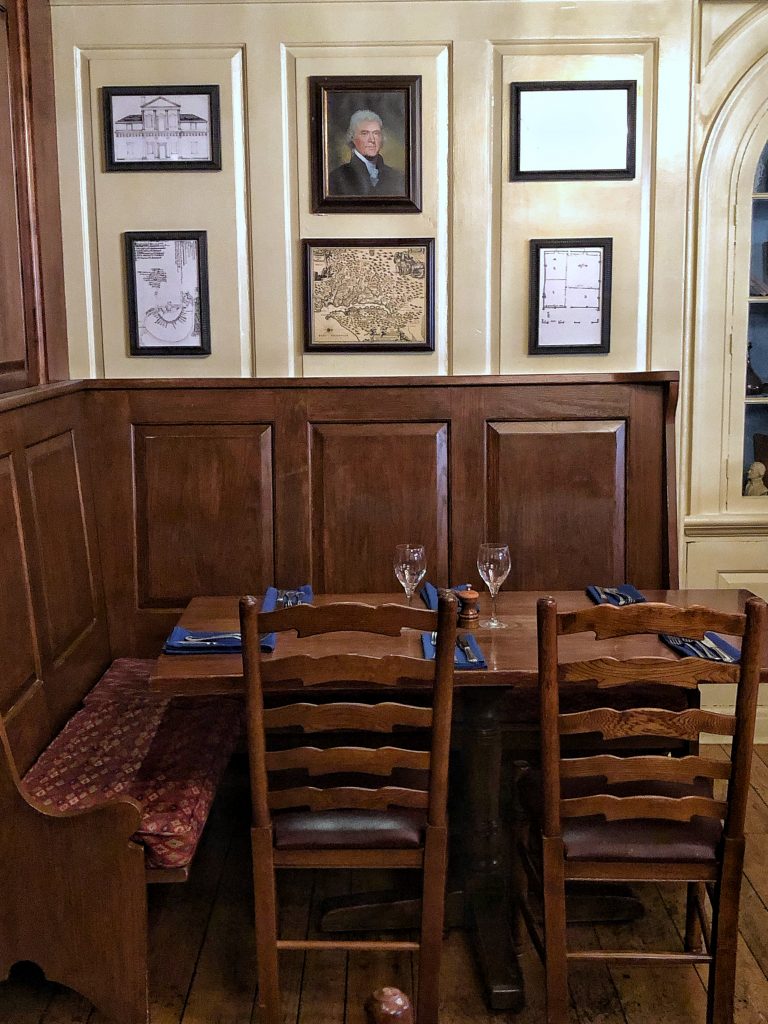 There are four vegan options on the Liberty Tree Tavern menu. 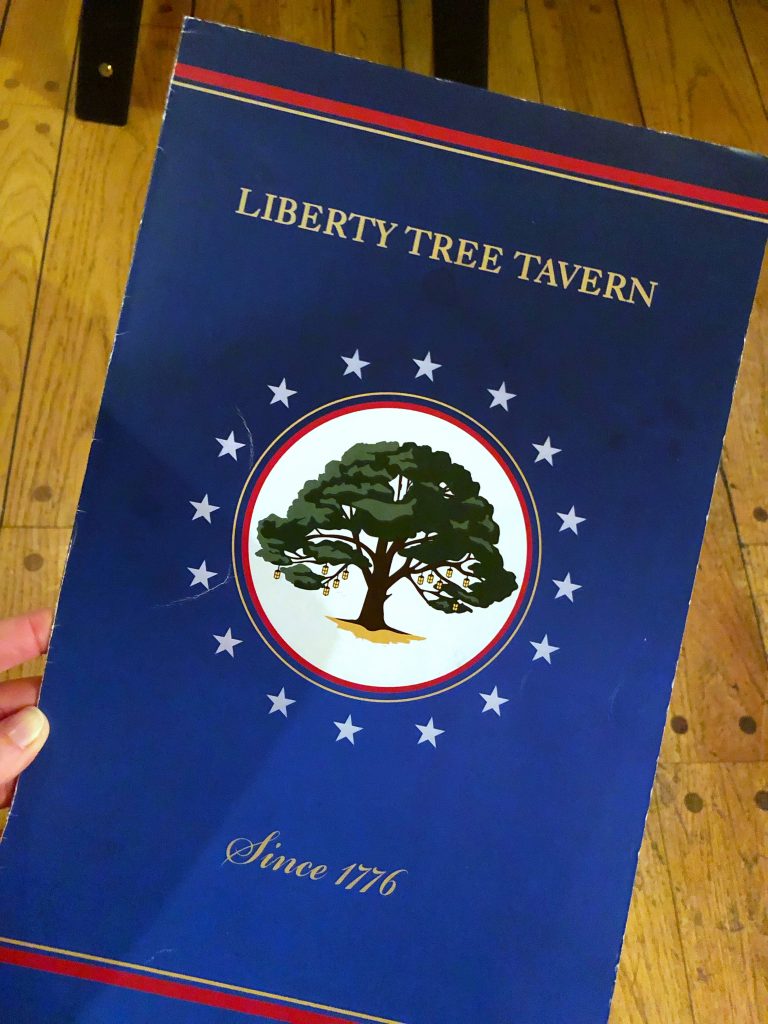 This is the Revolutionary Meatloaf ($21)  which is a plant-based meatloaf served with mashed potatoes, roasted root vegetables and mushroom gravy. 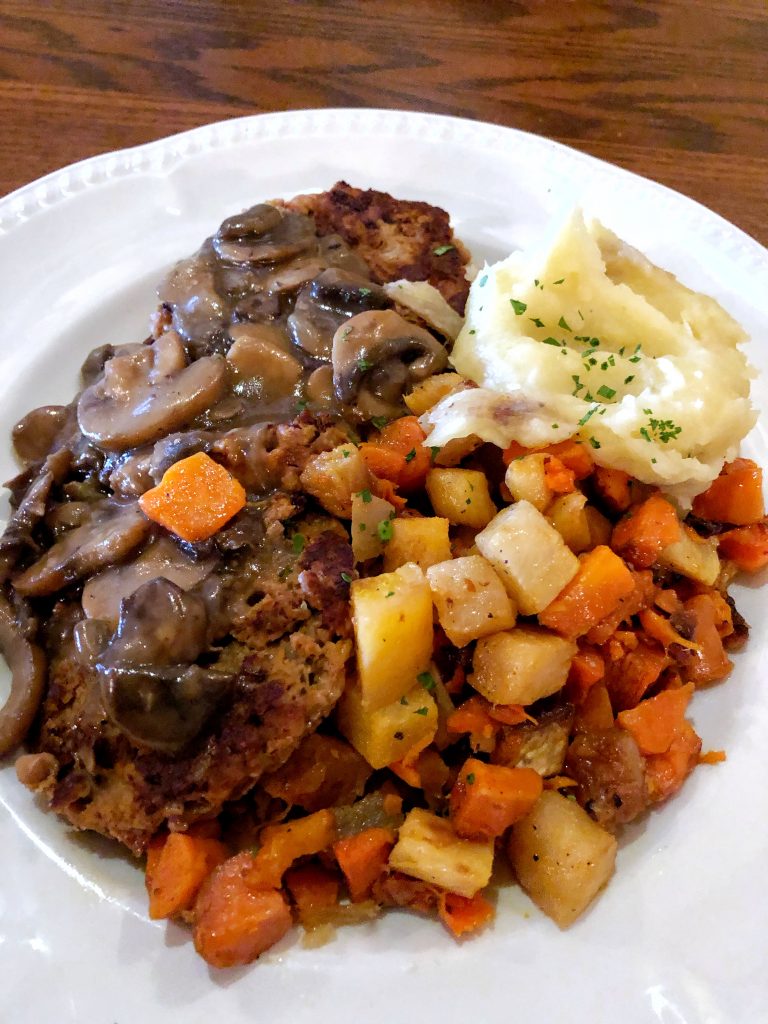 The meatloaf itself is made with a base of Impossible Foods vegan meat and the gravy is absolutely perfect with it.

The potatoes were whipped just right, no clumps, and were garnished with a bit of fresh herbs. 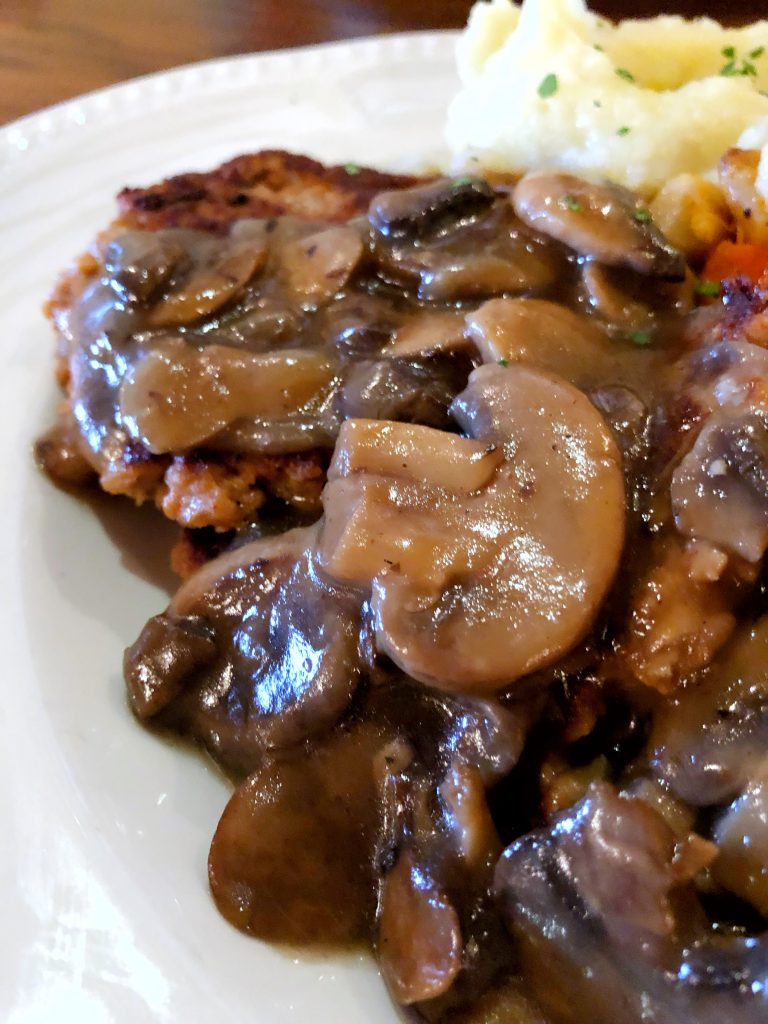 I consider myself a bit of a whole food, plant-based veggiesaurus but I wasn’t really wild about the root vegetable medley. The veg was cooked properly, I’m just not a fan of parsnips and cooked carrots. I think next time I’ll ask for double mashed spuds. 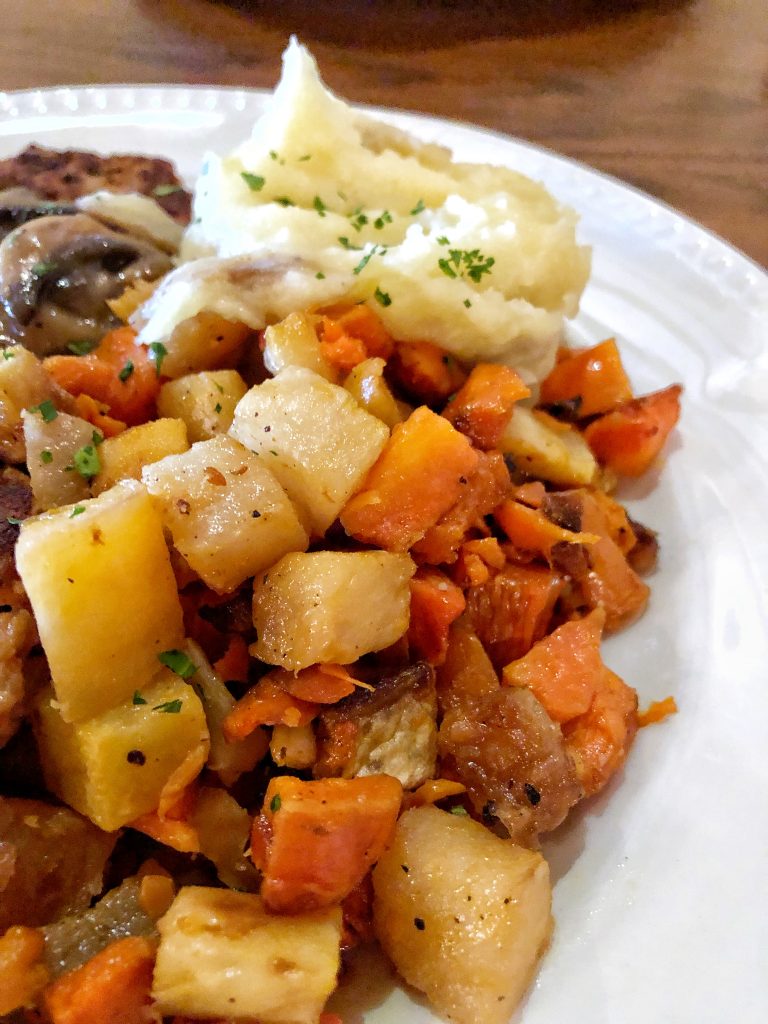 I highly recommend the Revolutionary Meatloaf. If you’re not into vegan meat alternatives you can opt for the Portobello Pot Roast ($24) with hearty mushrooms, roasted root vegetables and brown gravy.

Also on the menu is a vegan Roasted Vegetable and Tomato Soup. And for dessert…..

Johnny Appleseed’s Warm Apple Cake which is a spice cake with apples and a caramel sauce.

When this dessert first launched it was topped with a decadent frosting. 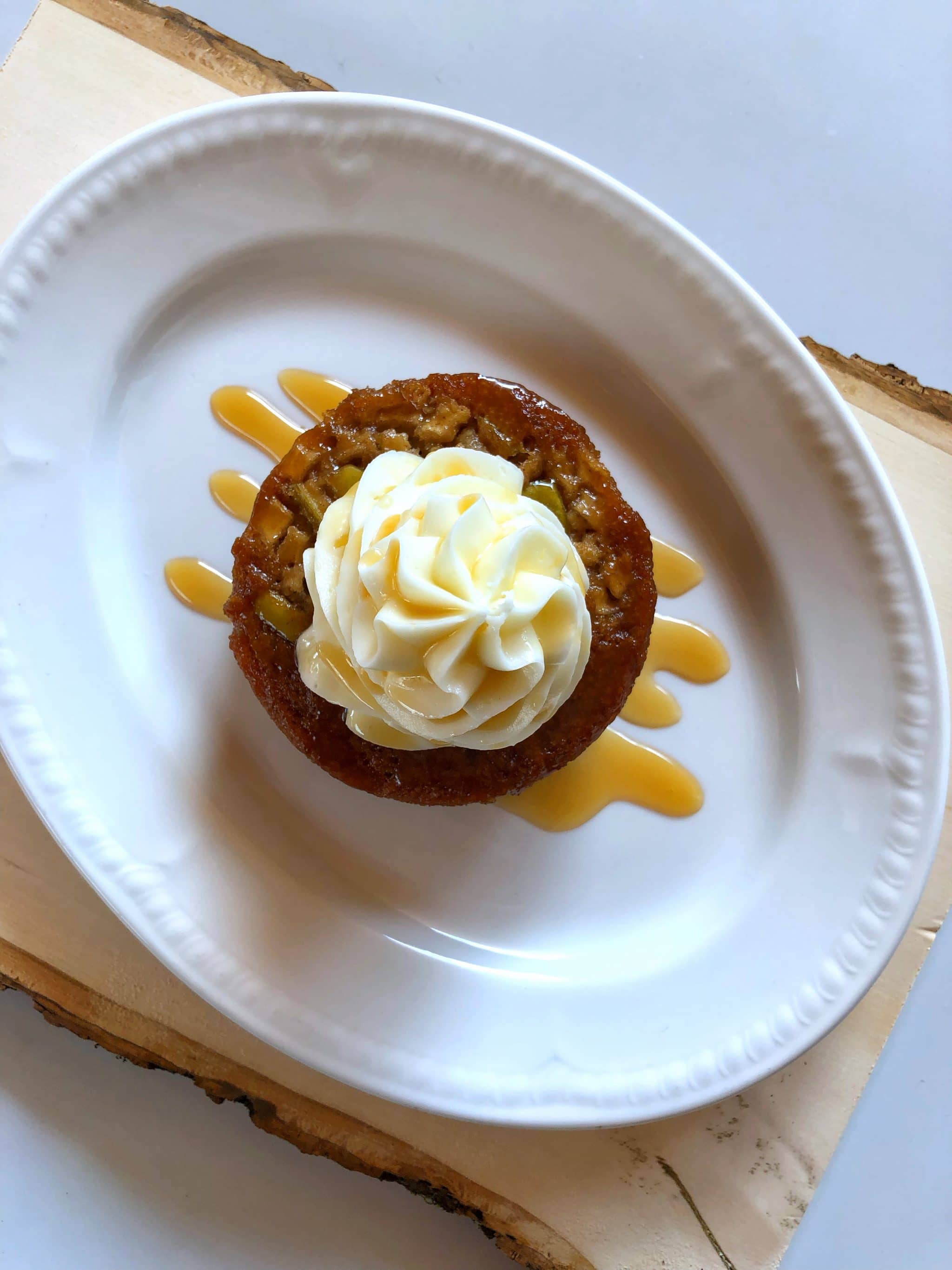 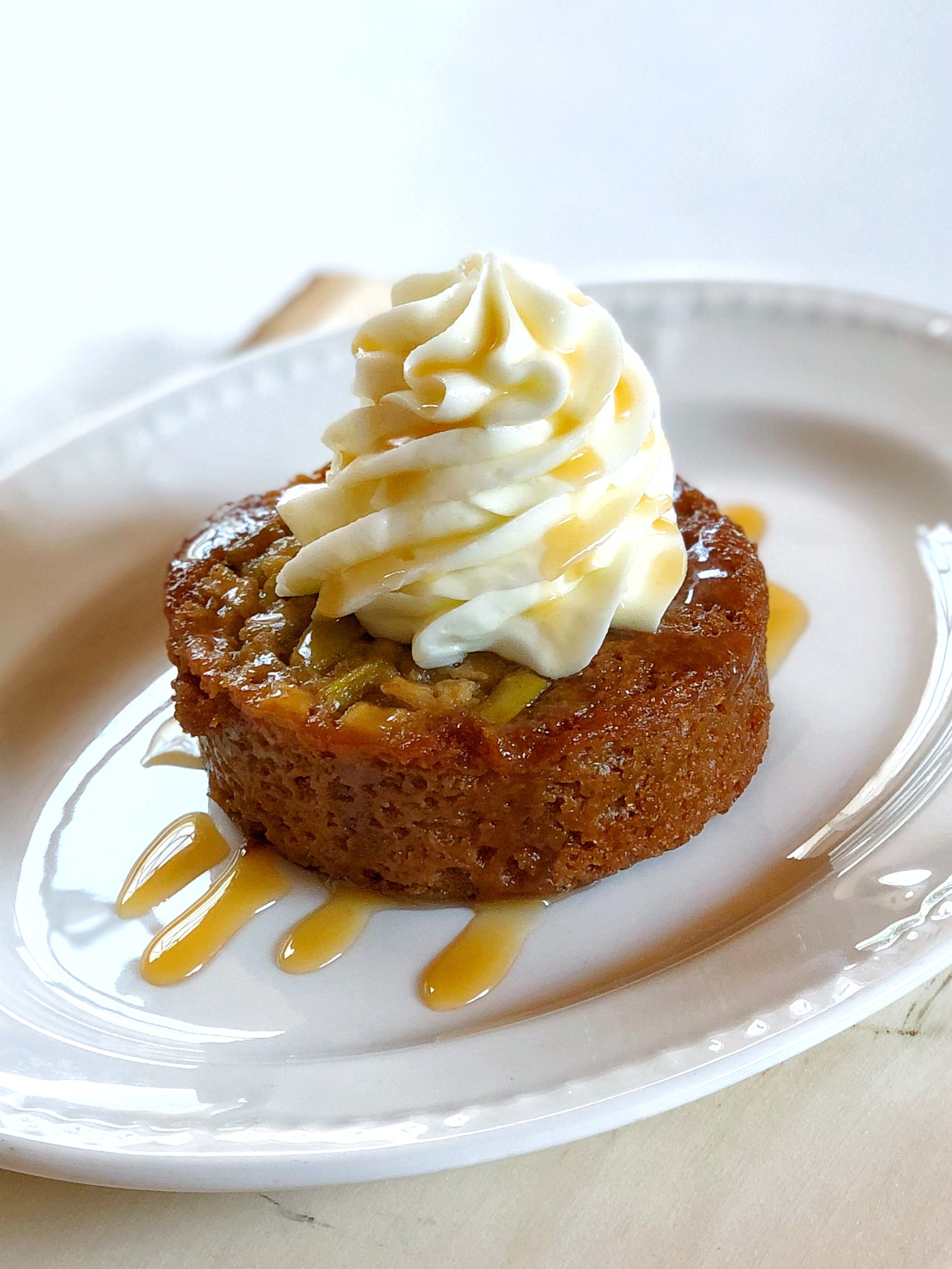 The edges of the cake had a light crust to it from the sugar glaze. It was truly magical!

Recently the icing has been replaced with a vegan whipped topping. This updated photo is from our friend @VeganMalory on Instagram. 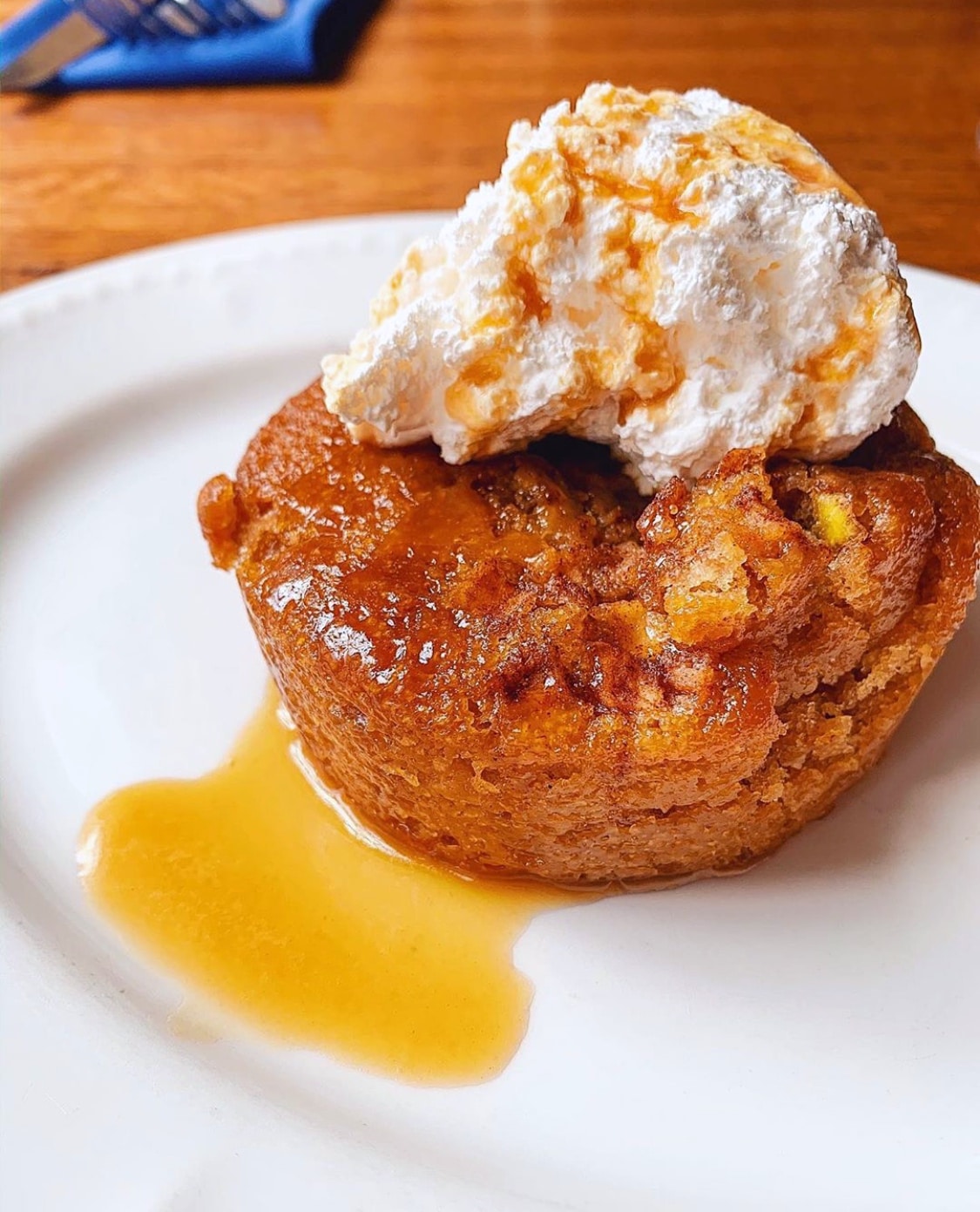 These dishes are also an option during dinner service where the restaurant switches over to all-you-can-eat, family style dining.

WANT TO REMEMBER THIS OPTION? Save the “Vegan Disney Food Review: Lunch at Liberty Tree Tavern in the Magic Kingdom at Walt Disney World” pin to your favorite Pinterest board. 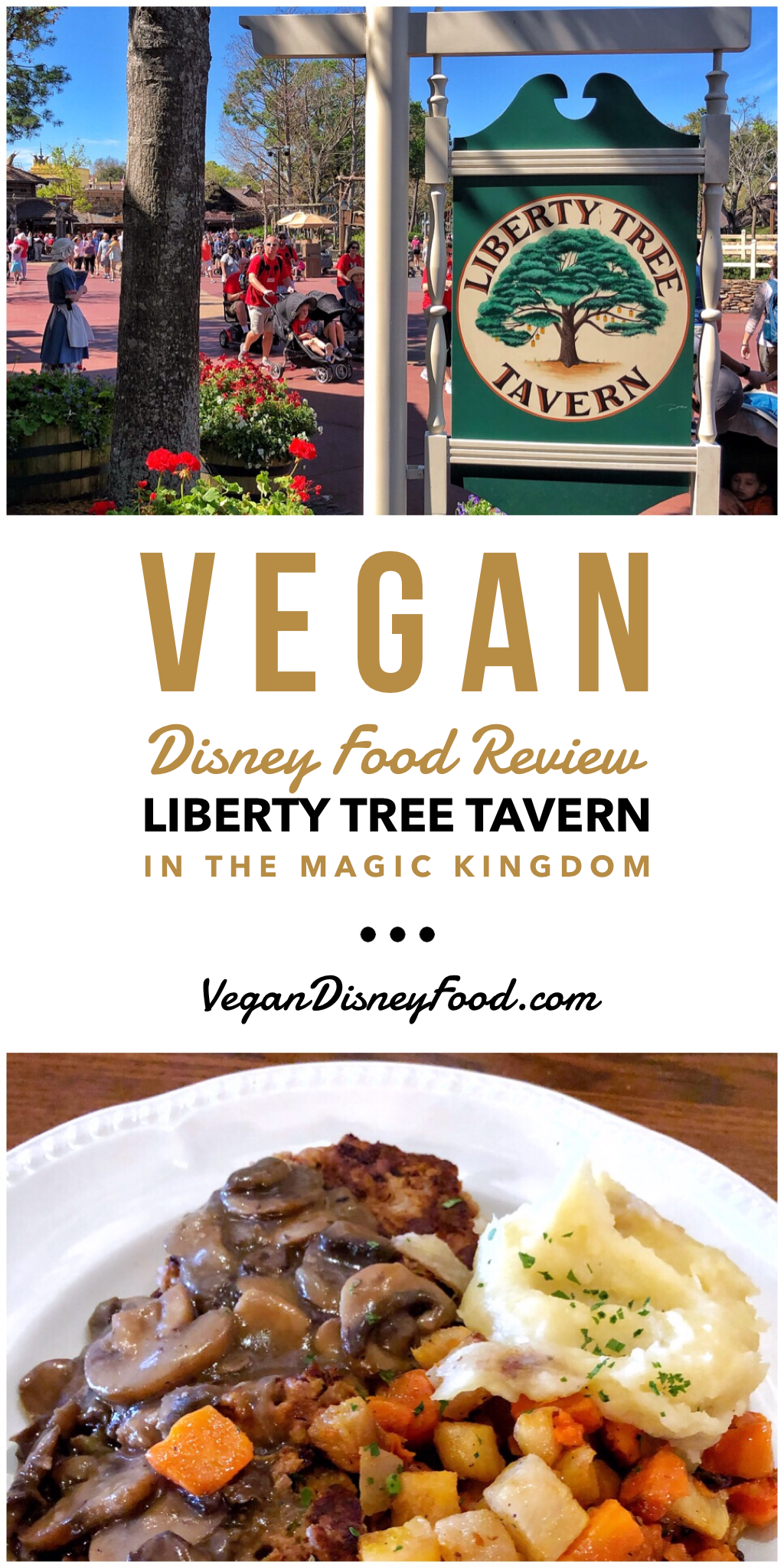