Looking for vegan options at The Edison in Disney Springs at the Walt Disney World Resort? There’s a couple of options available. 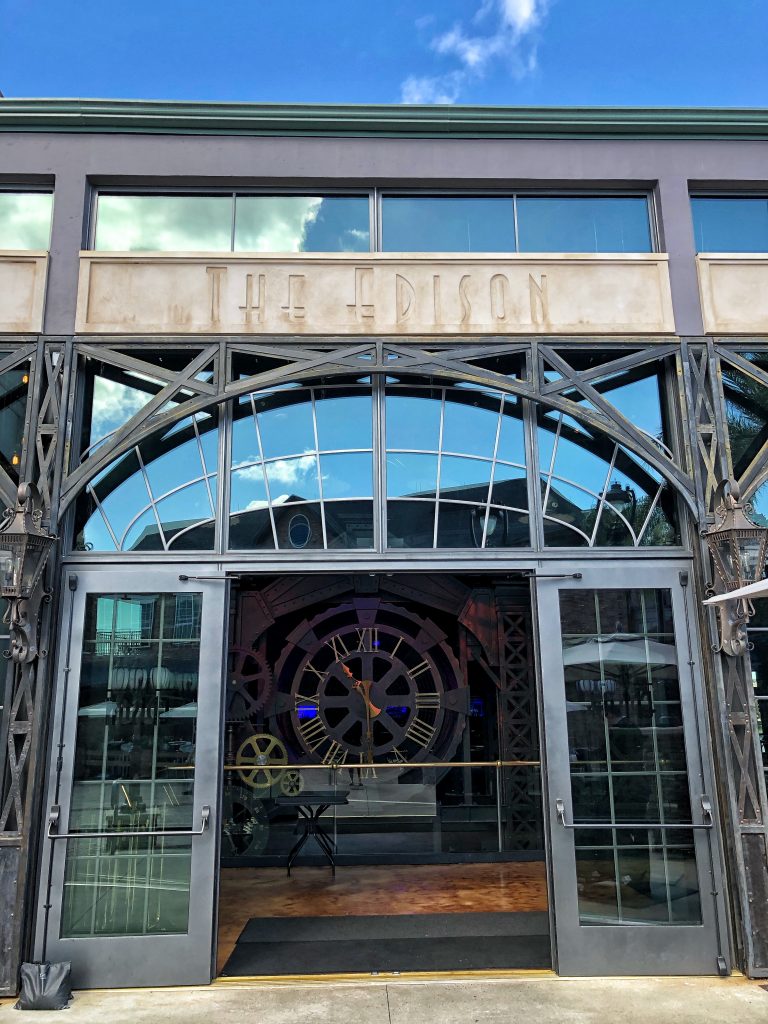 Settle in for a relaxing lunch in this 1920’s era restaurant themed to a gothic-style electric company. The Edison has a unique vibe unlike anything else at the Walt Disney World Resort. 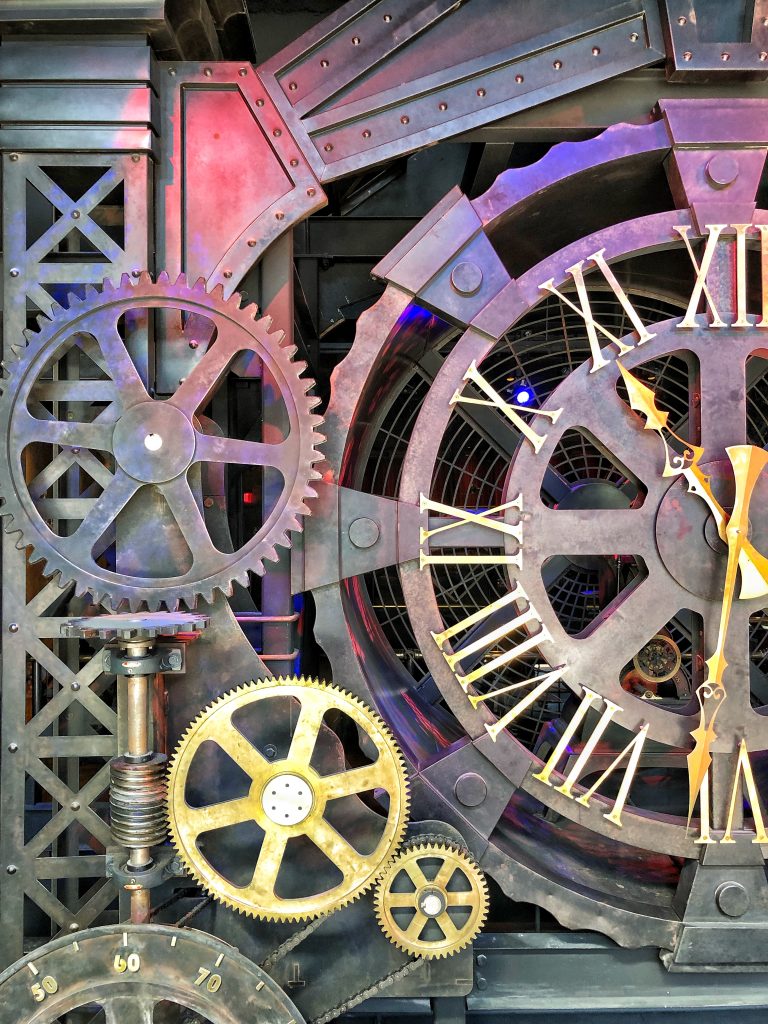 Entering The Edison, you immediately get a sense of the size, scope and steampunk’ish design of the place.

During the day the space seems unassuming, but It completely transforms at night. 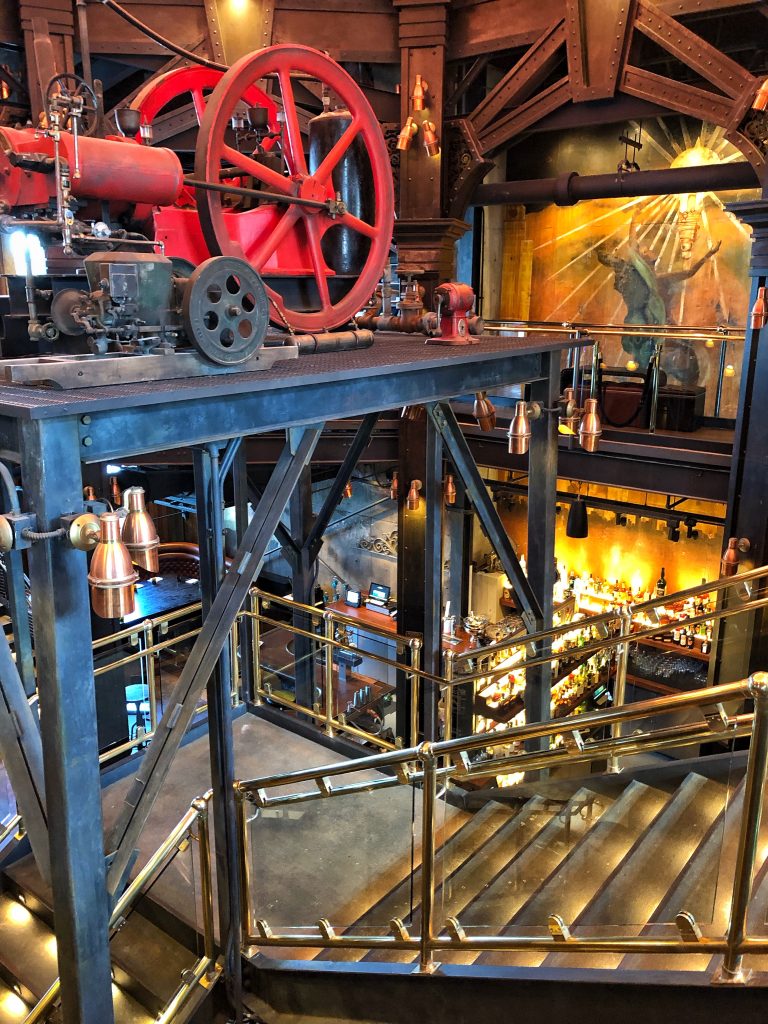 The restaurant is divided into several different sections and feels industrial and expansive with its thirty five foot ceilings. We  made our way down to the first floor and were presented with the option of either indoor or outdoor seating. 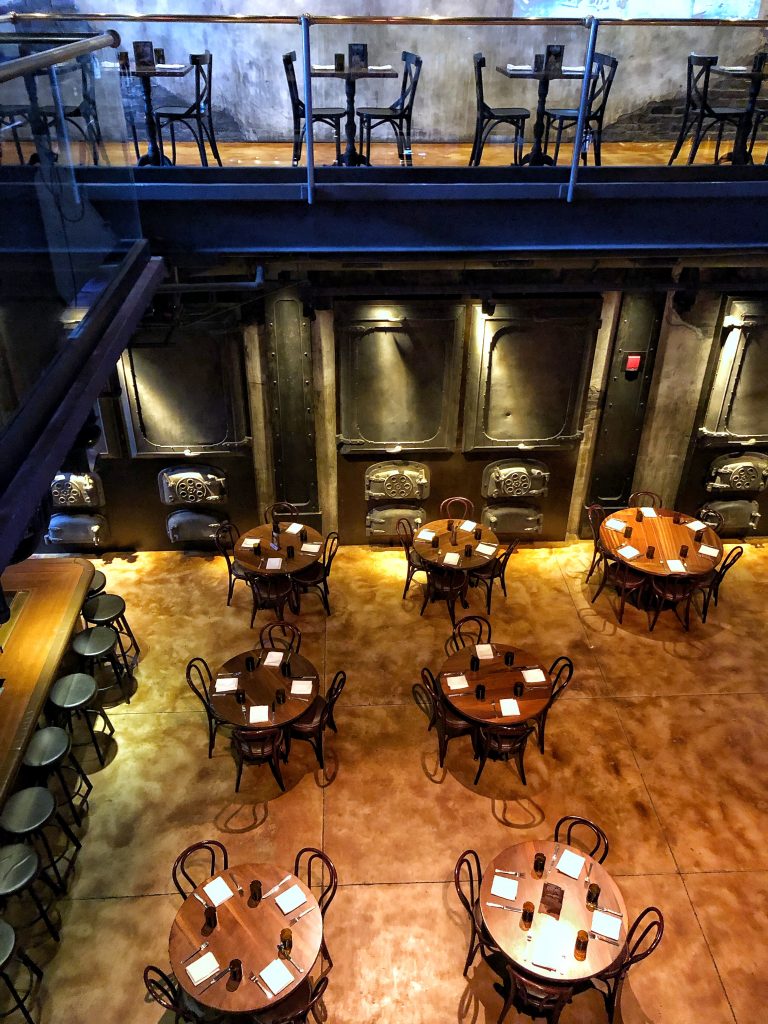 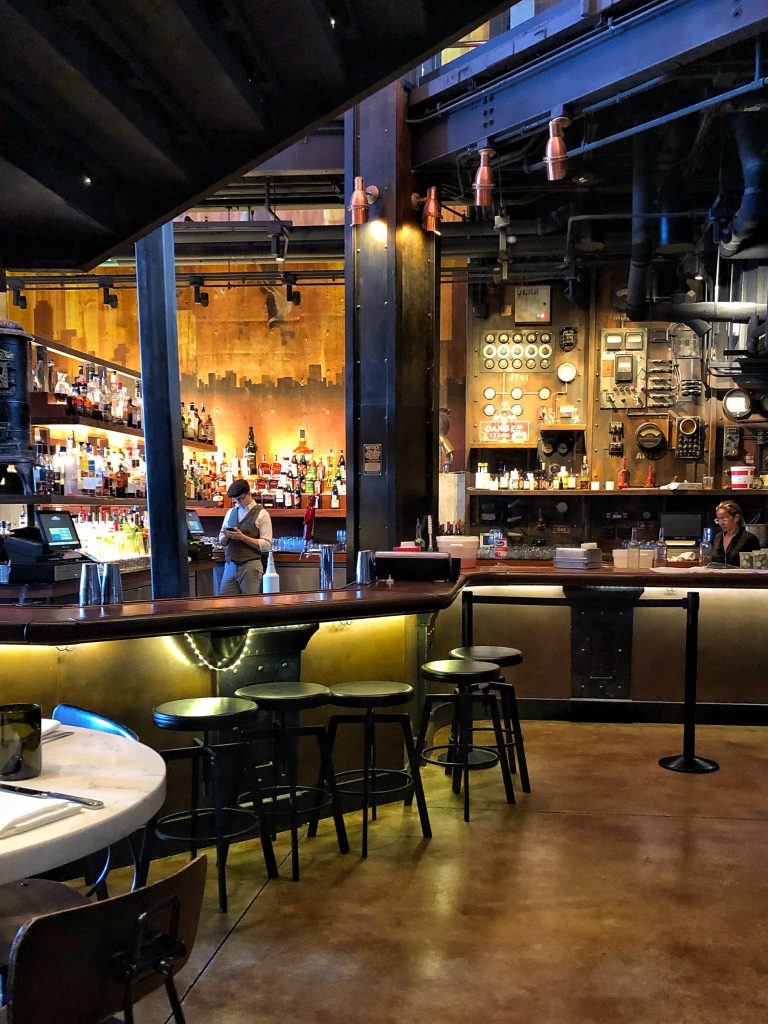 We opted to sit inside and were later told by our server that we had made the right decision. She said that the birds can be pretty aggressive outside on the patio. 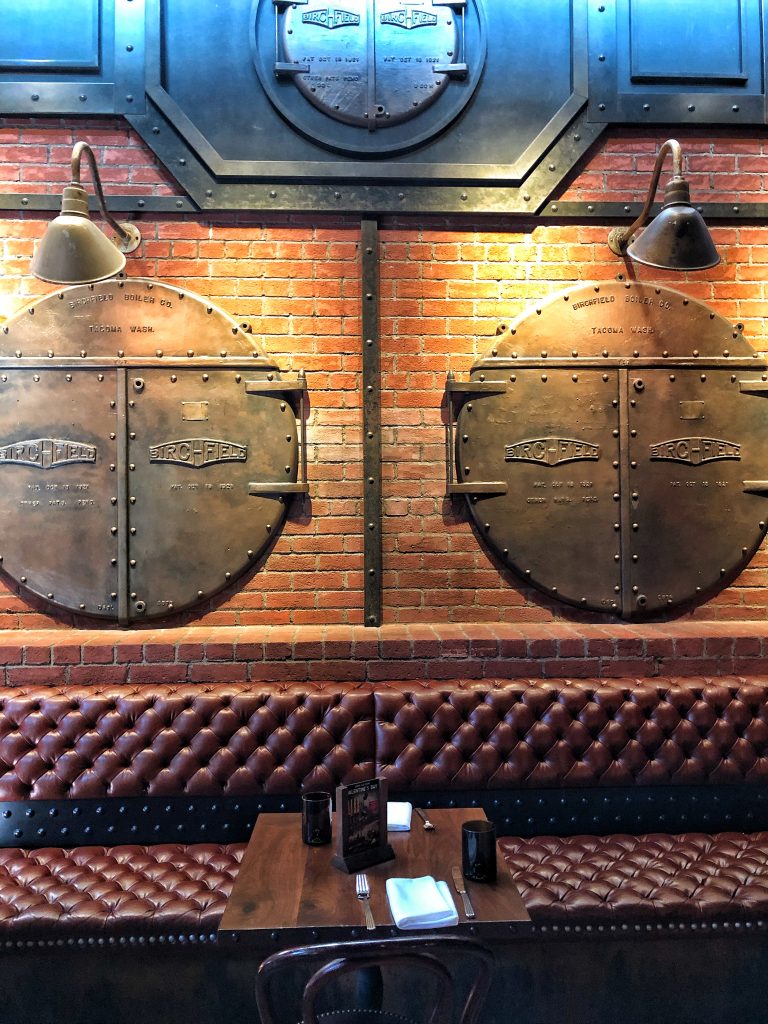 There were three vegan-as-is options on the lunch menu with a fourth that could easily be modified. Two vegan appetizers and two plant based entrees.

I took a look at the “Shares & Nibbles” section of the menu and had a hard time choosing between the Guac and Chips and Dips.

Ultimately I went with the Guacamole and Tortilla Chips ($14) which is described as being composed of California avocados, fresh lime and house-made tortilla chips. 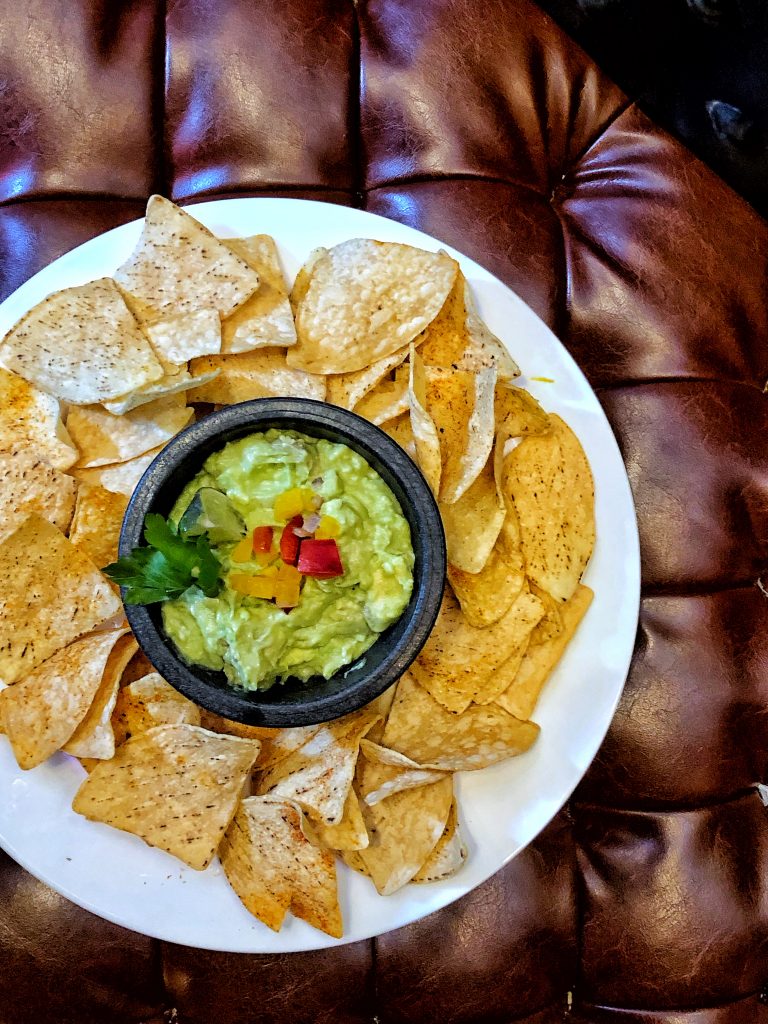 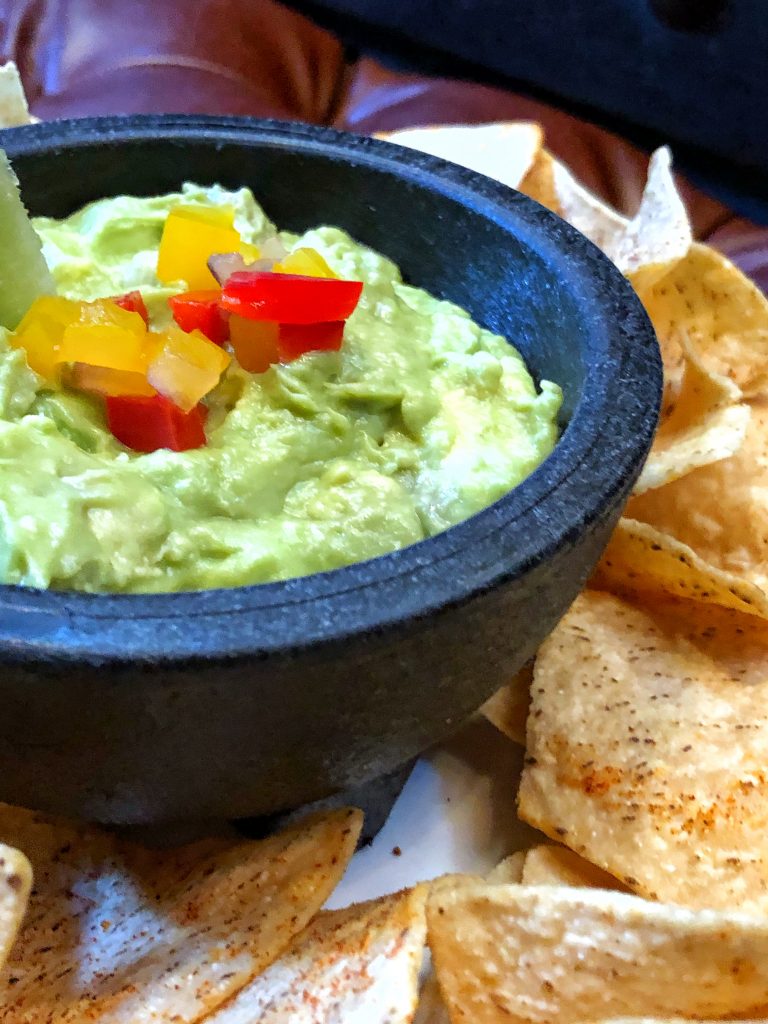 There wasn’t a touch of seasoning in the guac. It was plain smashed avocado. There was a tiny amount of diced bell peppers, a lime wedge and a sprig of parsley as garnish. No salt. No tomato. No onion. And parsley? Cilantro maybe…but parsley was odd.

I know those chips looked seasoned but that was just a dusting of paprika.

I also want to add here that I am a guacamole fiend and it’s not hard to make a good one. Save your money and order the guac at La Hacienda de San Angel in Epcot’s Mexico Pavilion.

If I return, I’d definitely try out the Mediterranean Dips and Pita Chips ($16) with garlic hummus, red pepper hummus and kalamata tapenade.

My entree was a choice between somewhat healthy or all out indulgent.

The healthy option was the modified Fall Celebration Salad ($18) which is a spinach salad with apples and pears tossed in aged balsamic topped with spiced pecans. Skip the ricotta salada to make it vegan.

I went with the The Impossible Burger ($18) which comes with lettuce, tomato, pickle, and french fried onion strings on a kaiser roll. 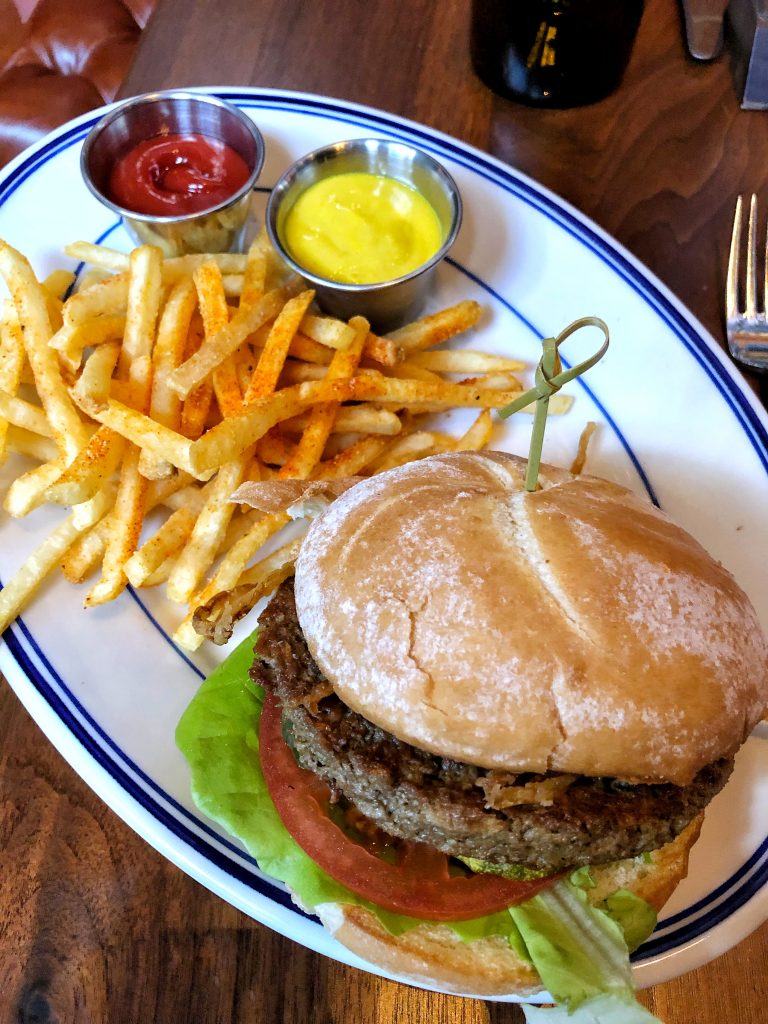 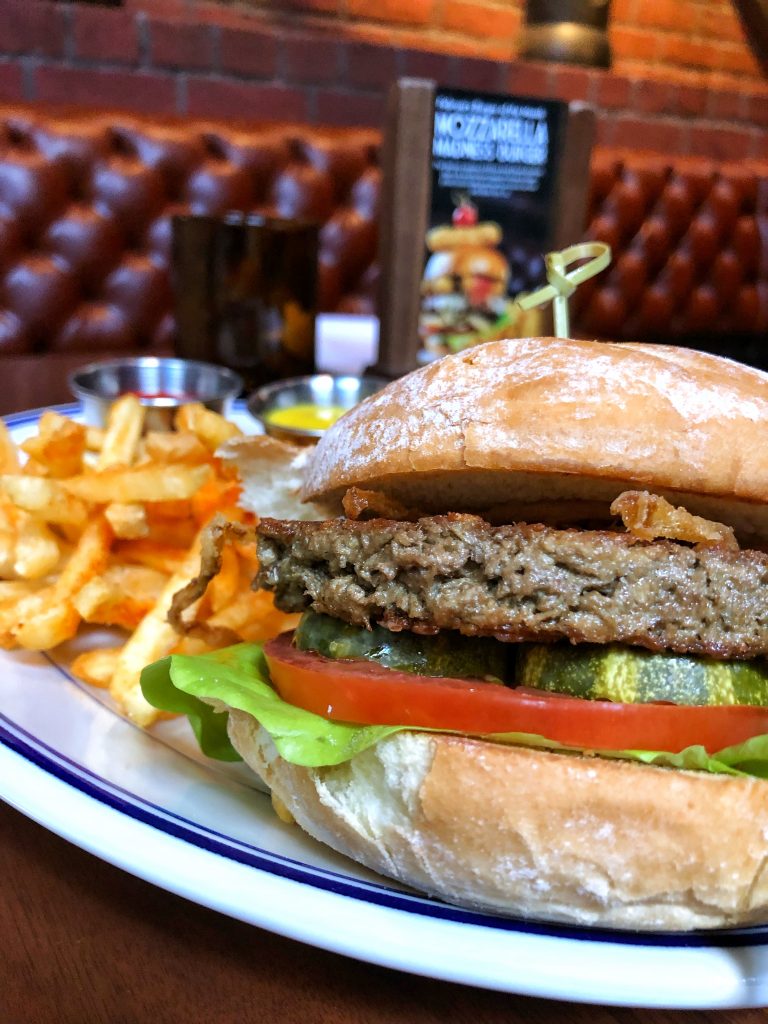 If you’re not in the mood for french fries you can opt for a side salad instead.

I loved this burger. The preparation was spot on and that bun was soft as a pillow. The fries were seasoned, albeit not as hot as they could have been, but this is definitely an entree I’d recommend.

Keep in mind that the atmosphere at The Edison is extremely laid back and relaxed, but at night there is a dress code after 10:00 p.m. when the contortionists, aerialists and DJ begin performing. Guests must also be 21 or older to enter after this time.

Additionally, The Impossible Burger is only listed on the “Lunch Menu”. Your mileage may vary on its availability during dinner.

WANT TO REMEMBER THIS OPTION? Save the “Vegan Disney Food Review: Lunch at The Edison in Disney Springs at Walt Disney World” pin to your favorite Pinterest board. 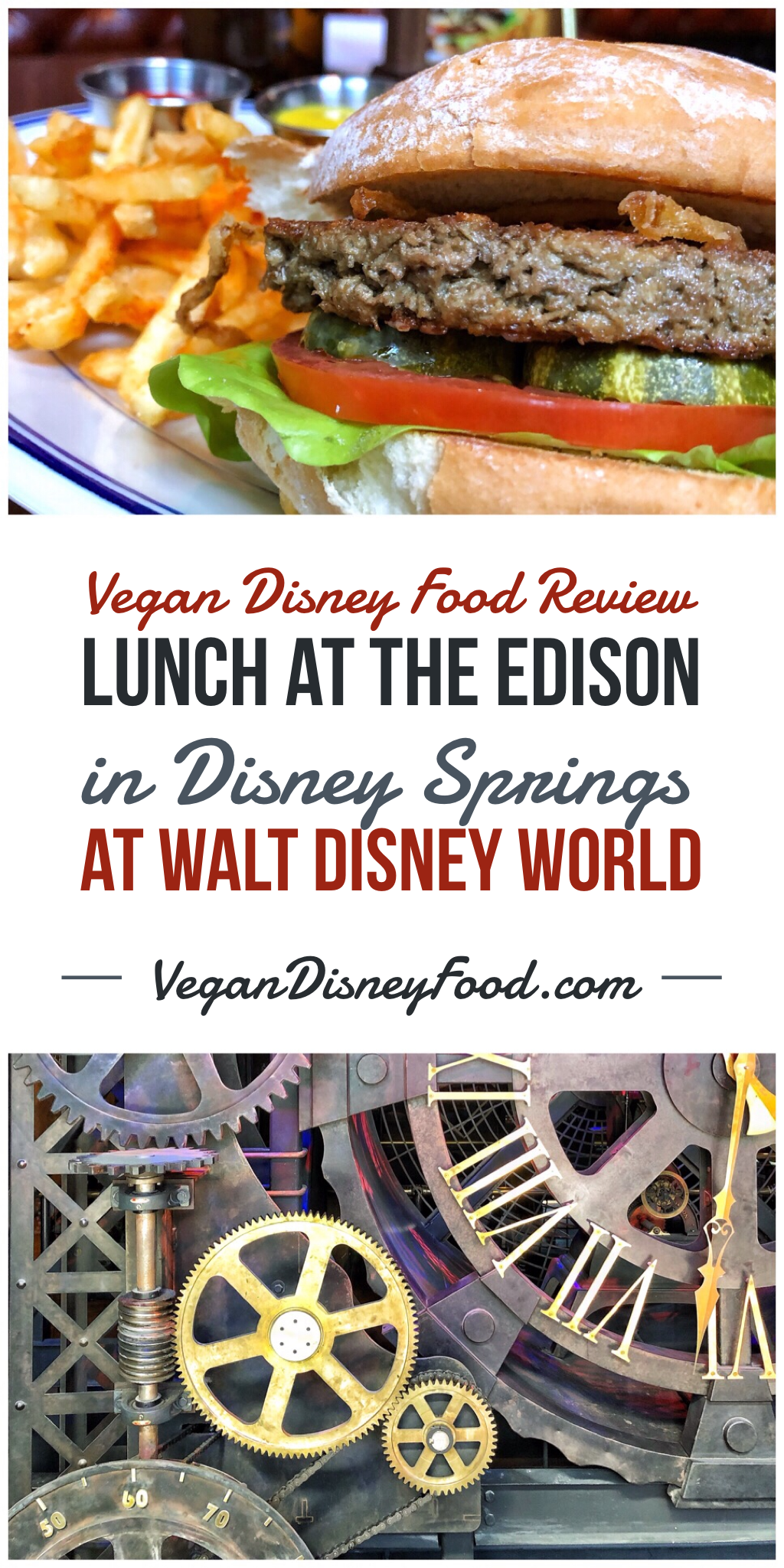