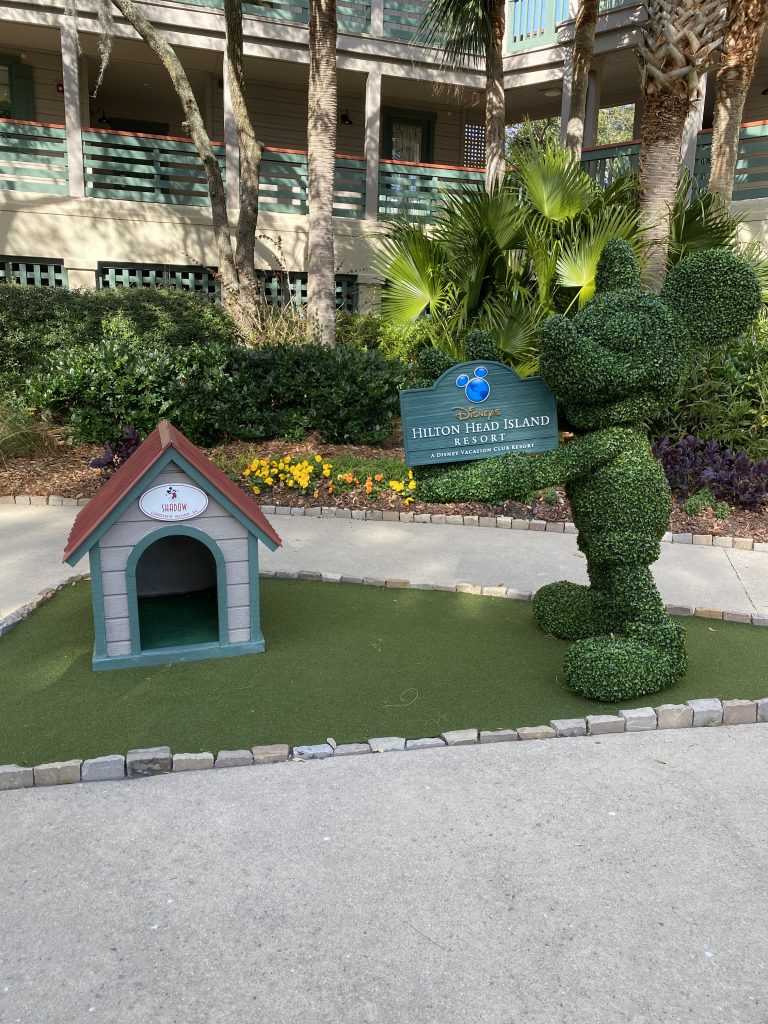 You may have also guessed that these resorts are part of the Disney Vacation Club or DVC properties. They were all built around the same time, with Old Key West (originally just called the Disney Vacation Club Resort) opening in 1991, Vero Beach in 1995, and Hilton Head in 1996. Because they were all designed and built to be part of Disney’s vacation ownership program at the same time, they are very similar in design. The resorts are also all staffed with Disney Cast Members. As a result, you feel like you’re at Disney, even though you’re 2-5 hours away. 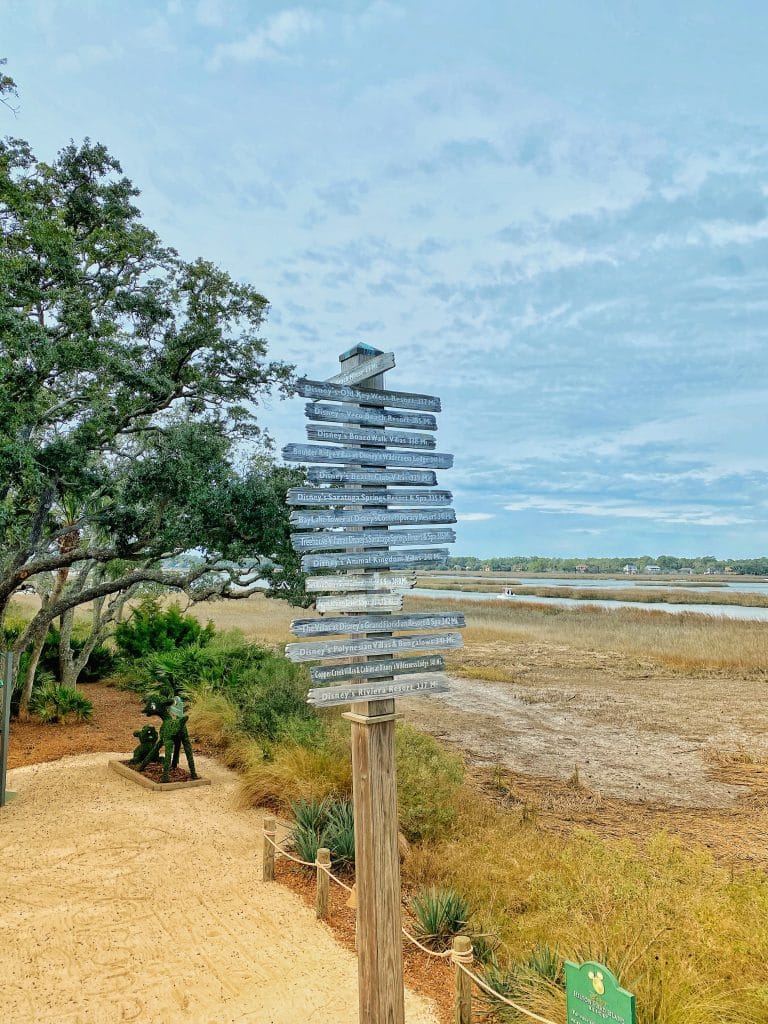 My family has made a tradition of staying at Disney’s Hilton Head Island Resort in the off season to celebrate my oldest son’s birthday. We aren’t DVC members, but you can still stay at one of the villas just like the DVC properties at Walt Disney World. It makes for a great, quiet getaway to just relax and unwind.

The dining options aren’t very abundant, since Hilton Head is full of dining spots across the island. Additionally, each room has a fully-equipped kitchen, so you can pop over to one of the many local grocery stores and stock up to cook in your villa. If cooking isn’t your thing, there are enough vegan items to warrant a list, so let’s get to it! 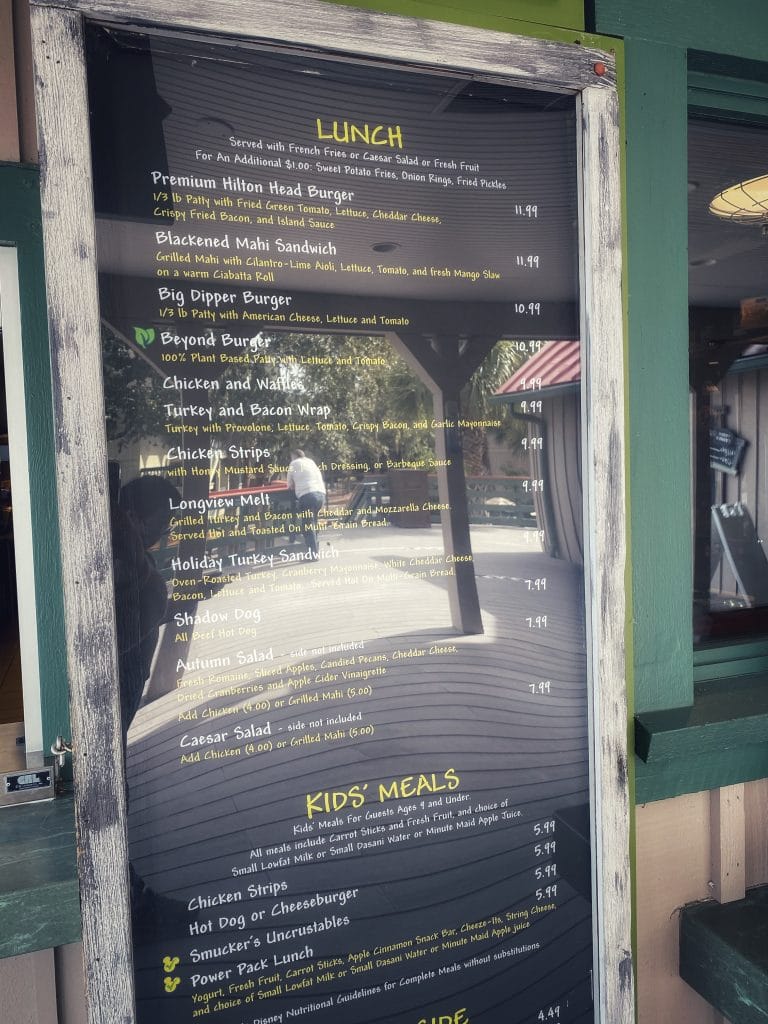 Tide Me Over – Quick Service

Disney’s Hilton Head Island Resort doesn’t have a table service option, unlike its sister property, Vero Beach. They do have two quick service options, Tide Me Over and Signals. Signals is located at the separate Beach House and closed during January and February, so we were not able to visit there. They do have a house-made veggie burger when they are open. Signals also has a salad option and fries, but that’s about it.

Tide Me Over is a take-out window over at the main recreation area of the villas property at Disney’s Hilton Head Island Resort. Normally, you can eat at little tables outside on the deck, but those have been removed due to current conditions. We always like to take our food back to our room anyway. Tide Me Over is currently open for breakfast and lunch, opening at 8am and closing at 4pm daily. 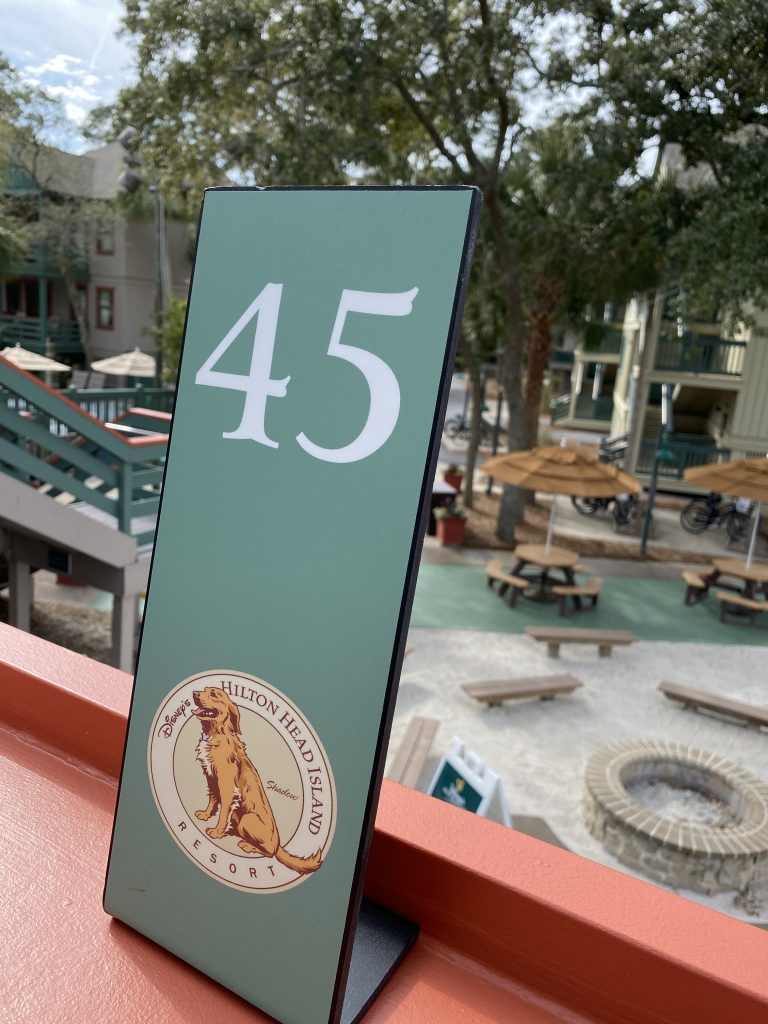 For breakfast, you actually have TWO options – the Sun Butter with Toast and fruit and vegan (gluten free) Mickey Waffles.

Sun Butter with Toast and Fruit – whole grain toast with Sun Butter spread, topped with fresh sliced fruit and sunflower seeds, drizzled with agave syrup. We LOVED this breakfast, it was the perfect start to our day, such a nice change from the usual options. $5.99 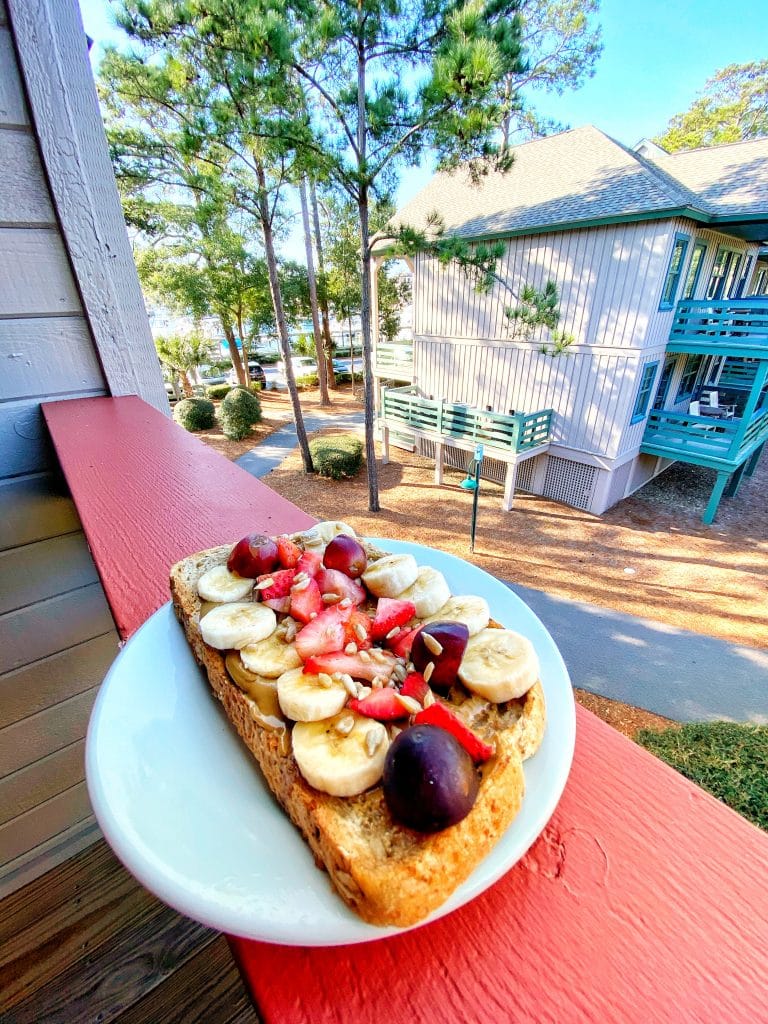 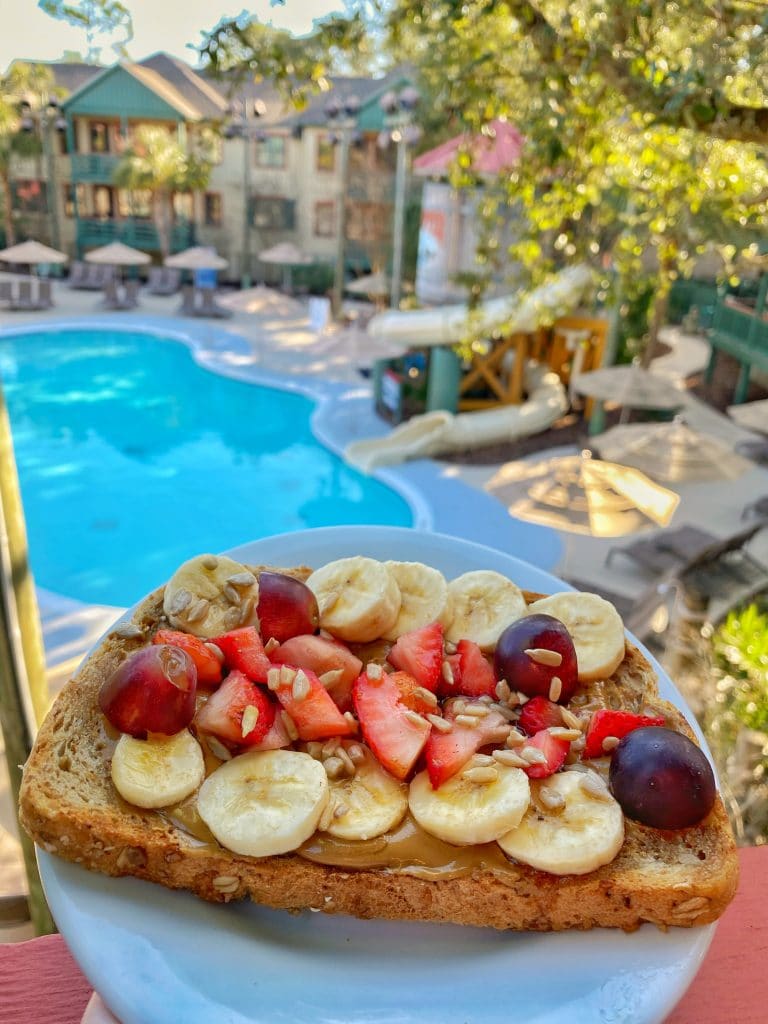 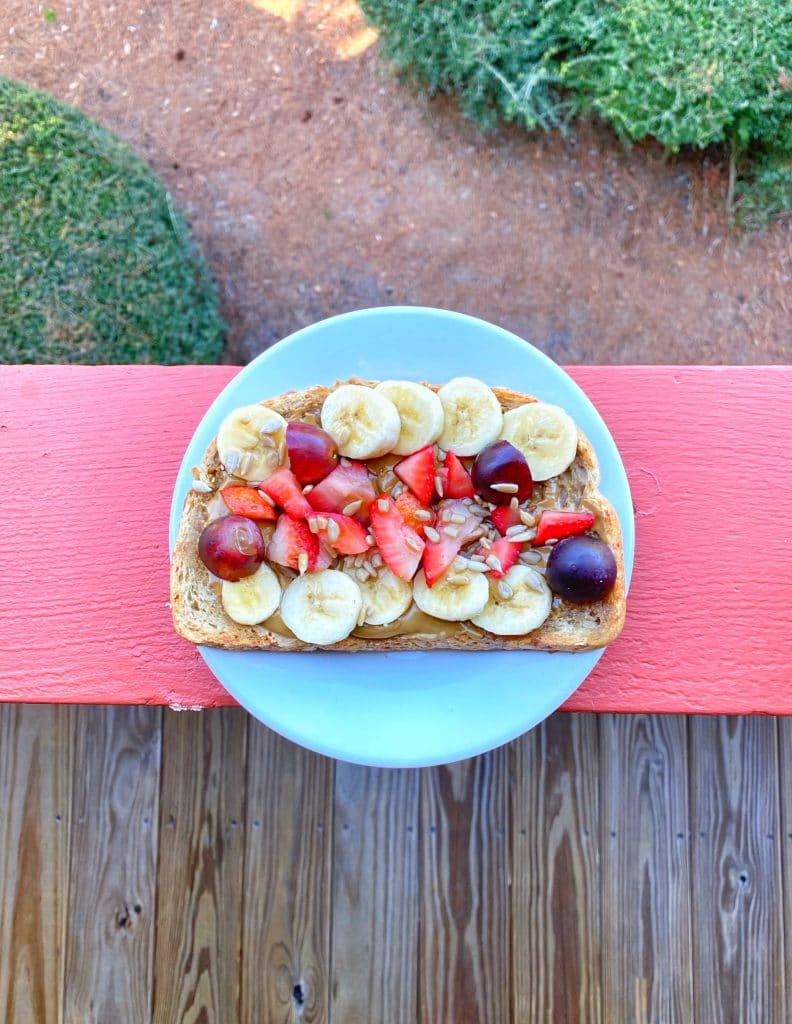 Vegan (Gluten Free) Mickey Waffles – an old standby and favorite, served with a side of fruit. $8.99 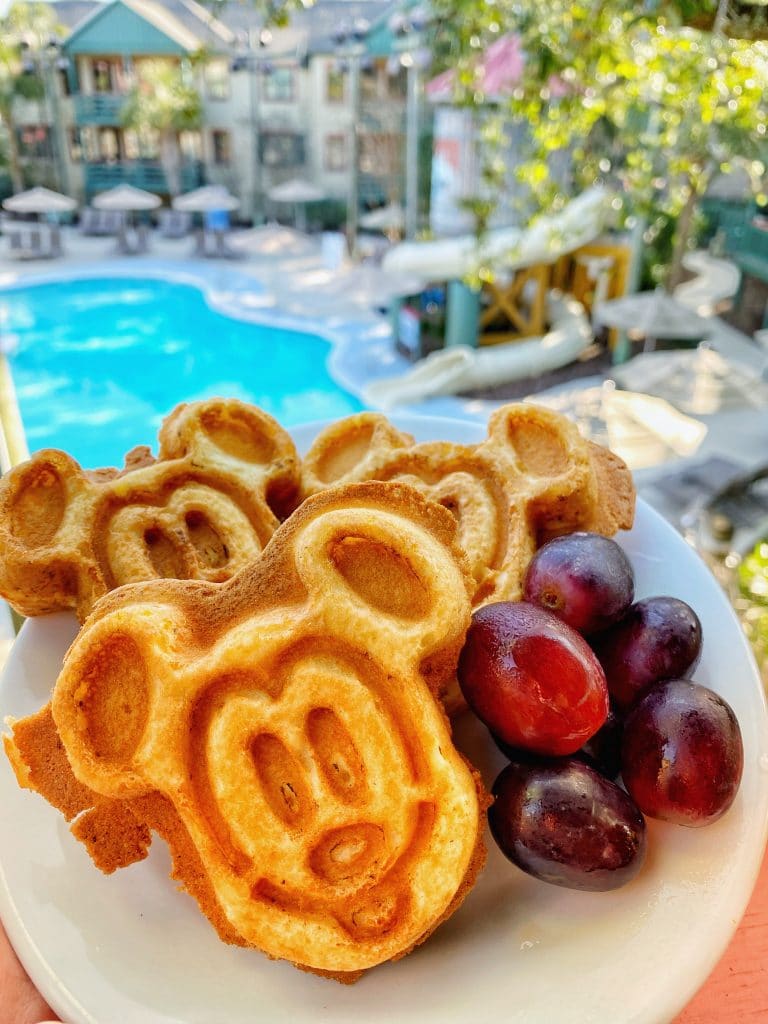 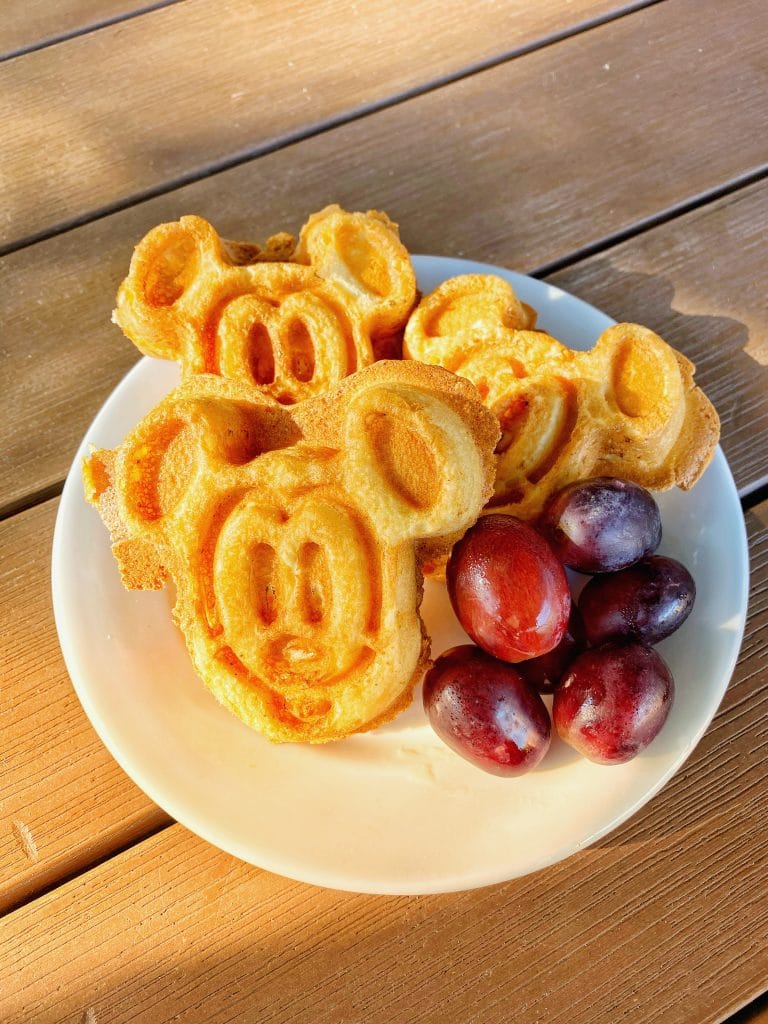 Beyond Burger – Beyond brand burger on a vegan bun (this is not gluten free, we checked) with lettuce and tomato. Comes with your choice of fresh fruit, fries, or sweet potato fries for $1 more. $10.99 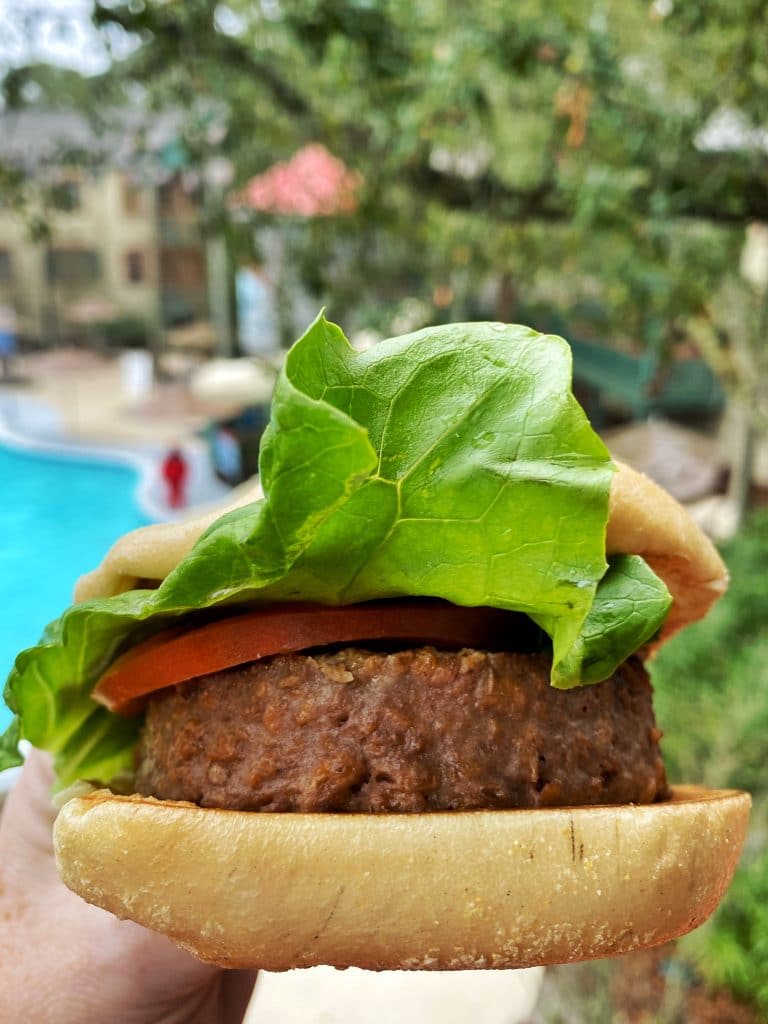 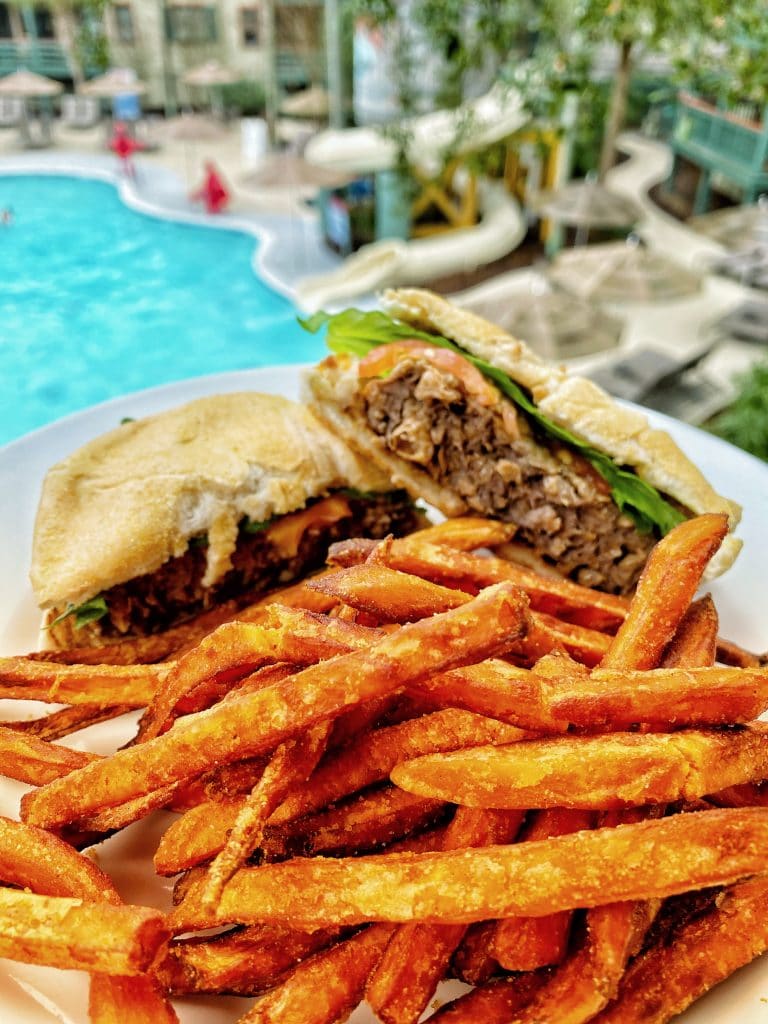 Autumn Salad (modified) – you’ll need to remove the cheese, and remove the candied pecans, which do not themselves contain egg but are from a plant where they can’t guarantee there isn’t cross-contamination. Ask to switch the vinaigrette that comes with it to the Ken’s Balsamic Vinaigrette that they have on hand. We did not order this because of the amount of modifications, it wasn’t worth it to us, so we don’t have a photo. This is seasonal and may be updated throughout the season with different items. Currently at our 2022 visit it is a Mediterranean Salad which has feta to be removed. $7.99

Mickey Pretzel – we were so excited to get a Mickey pretzel outside of the parks! It was fresh and warm and delicious. It usually comes with cheese sauce but just say no thanks to that. $6.99 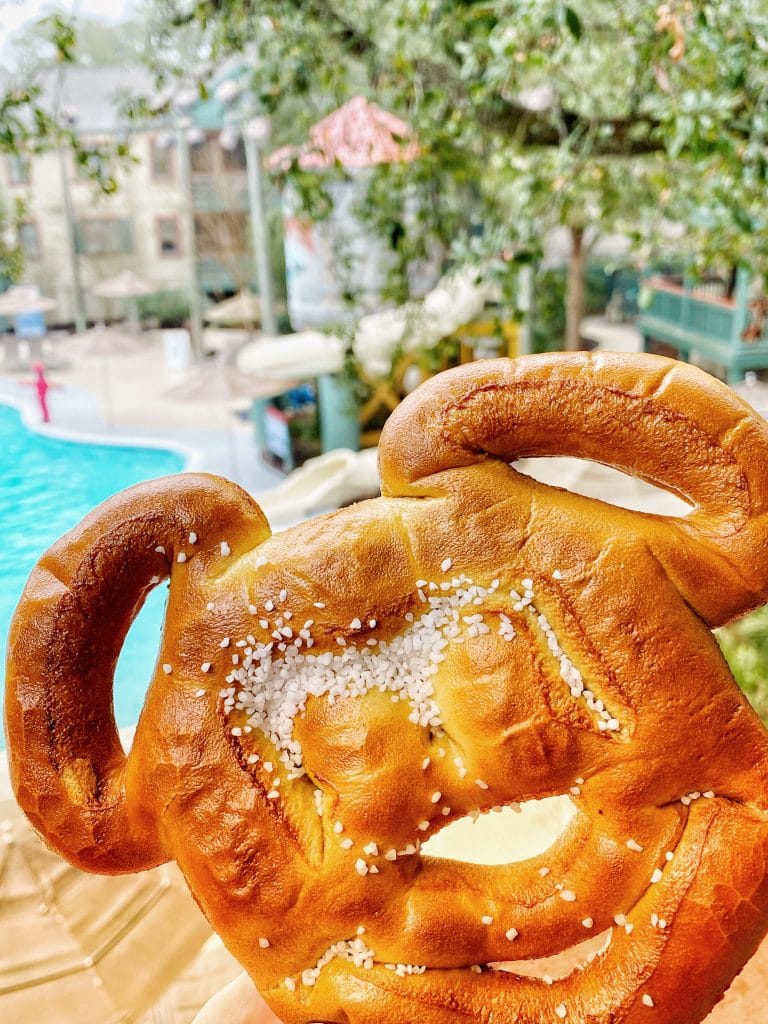 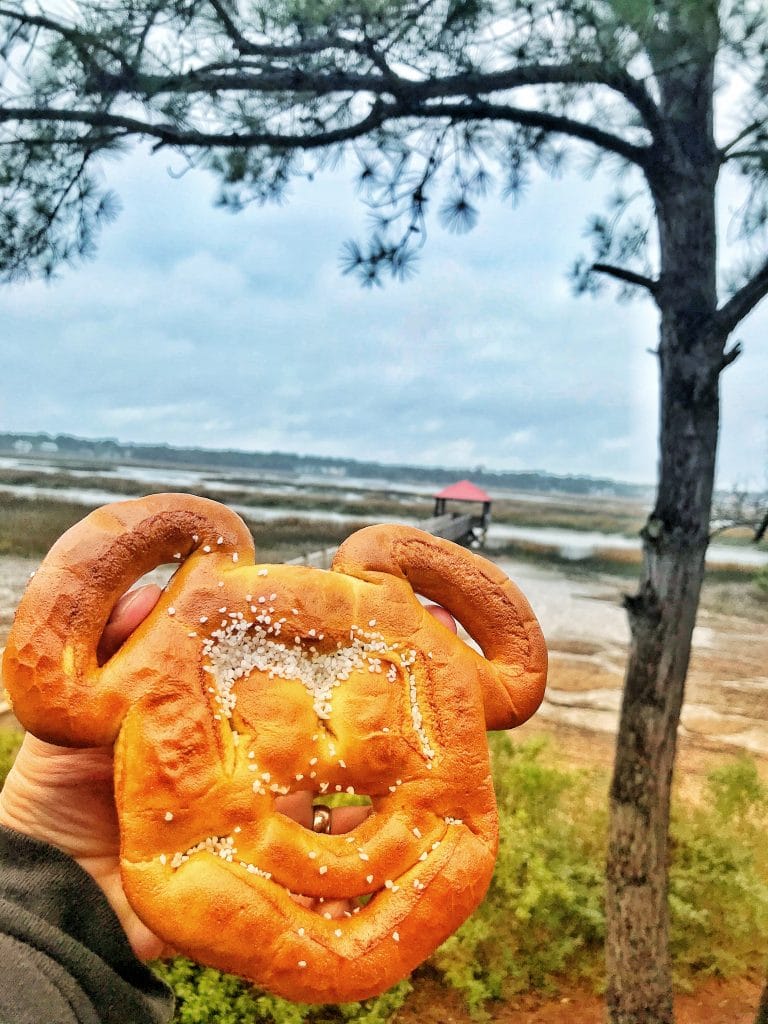 Dole Whip – Another Walt Disney World park and resort favorite, all the way in South Carolina! You can get a plain pineapple Dole Whip or a Dole Whip Float (or add rum!) and enjoy it in your room or lounging in a hammock. $4.49, $4.99 (float), $11 (with rum) 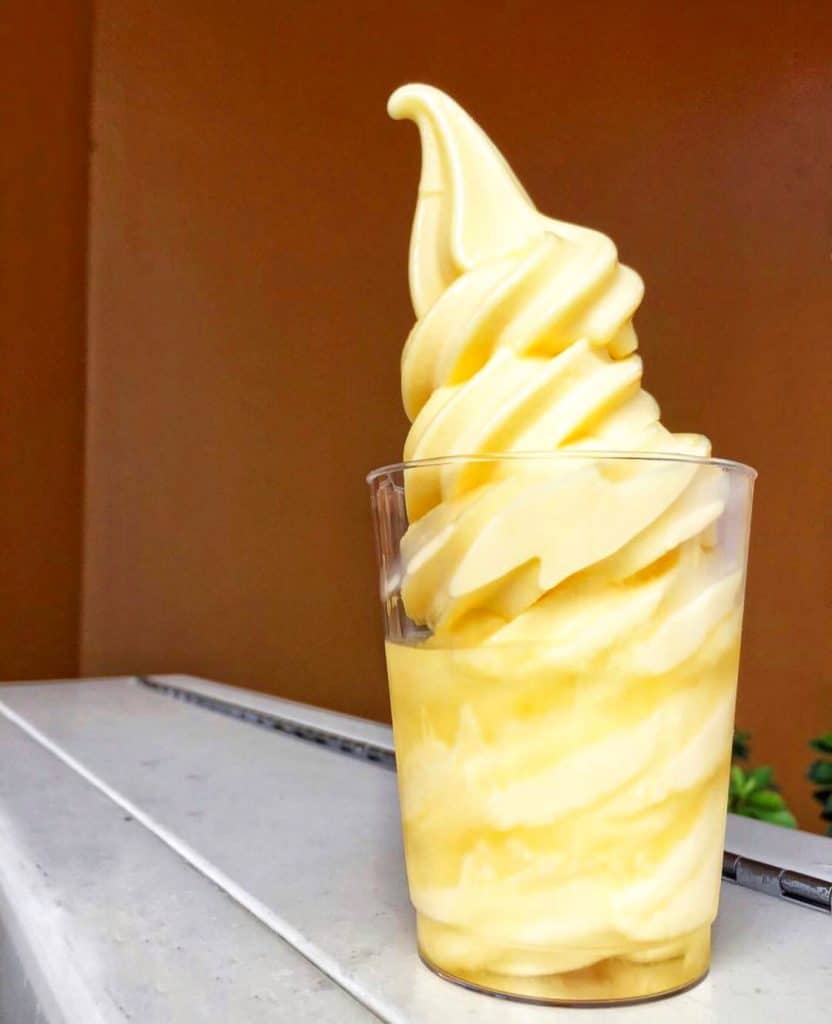 (the above photo is not from Hilton Head, it was a little chilly for a Dole Whip this past weekend, even with the added rum!) 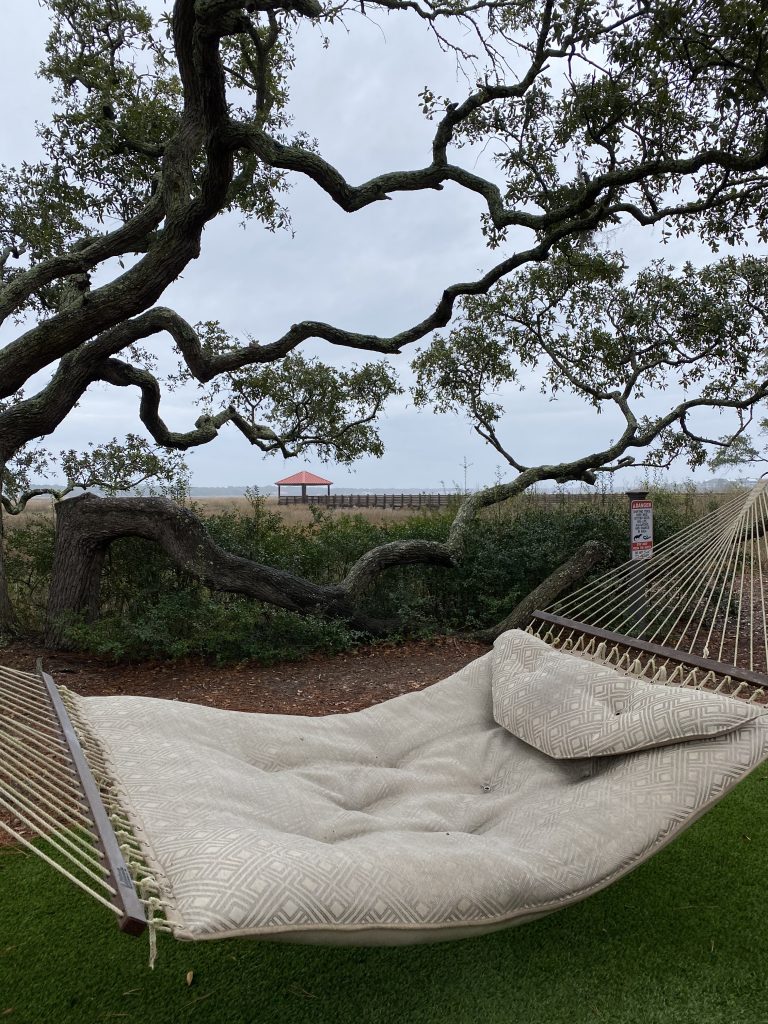 Sadly the onion rings and fried pickles both have egg and dairy in the batter and at our recent visit they had Buffalo cauliflower bites which had dairy in them as well.

And that’s going to do it for vegan options at Disney’s Hilton Head Island Resort! Not a ton, but enough to make it through, and the added fun of Mickey pretzels and Dole Whip really brings the Disney magic to the South Carolina low country.

Have you ever stayed at Disney’s Hilton Head Island Resort in South Carolina? Let us know what you thought of it in the comments below! We’ll be visiting Vero Beach soon too to update our site with their vegan options as well so check back.

Want to see what’s vegan in the rest of the Walt Disney World Resorts?

See our complete guide to what’s vegan at Disney Parks:

WANT TO REMEMBER THIS OPTION? Save the “Vegan Disney Food What’s Vegan at Disney’s Hilton Head Island Resort” pin to your favorite Pinterest board. 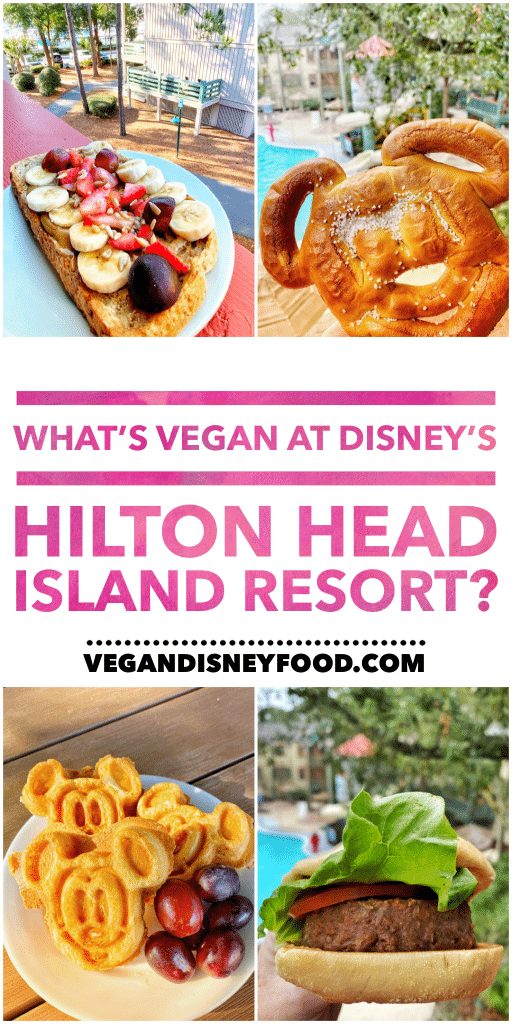