While the Disney Parks and most of the resort hotels have been reopened during the pandemic for a while now, there have been quite a few significant changes to menus and dining experiences. As a result, what you may have come to expect at some of your favorite spots may be a little different right now. Be Our Guest restaurant, located in the New Fantasyland section of the Magic Kingdom is one of those changed experiences. We visited Be Our Guest for dinner and want to share some new vegan menu items with you.

Our previous review of the Be Our Guest vegan menu was from right when the prix fixe menu had started, feel free to read that for a feel of what this 2-credit Disney Dining Plan location was once like.

Since the prix fixe menu is the only option for lunch and dinner, you have more chances to try it out. That said, with the dining room socially distanced with less tables, and reduced park hours, it can still be very difficult to get a reservation here.

What happened with us was we got a 7:50pm reservation, and the Magic Kingdom closed at 7pm. Since we are local, we arrived at around 6:45 and just walked around to experience the park. However, once 7pm hit, many places were roped off and we couldn’t explore much anymore. Since the attractions were all closed, we tried to check in early but were told we could not until 20 minutes prior to our time. So, we had to just stand around and wait for that time. (First world problems, we know, but just something to note.)

I was surprised by how many people were still in the restaurant and still checking in. For some reason I had pictured in my mind that we would be the only ones dining that late after the park closed. Once we checked in, our table was ready less than 10 minutes later, and we were seated 10 minutes before our reservation time.

We were taken to a table right by the windows in the ballroom, so we could enjoy the beautiful snowfall and the rest of the ballroom ambiance as we dined.

As previously reviewed, the bread service is vegan as is, we just needed to ask our server for some Earth Balance spread to be brought over. 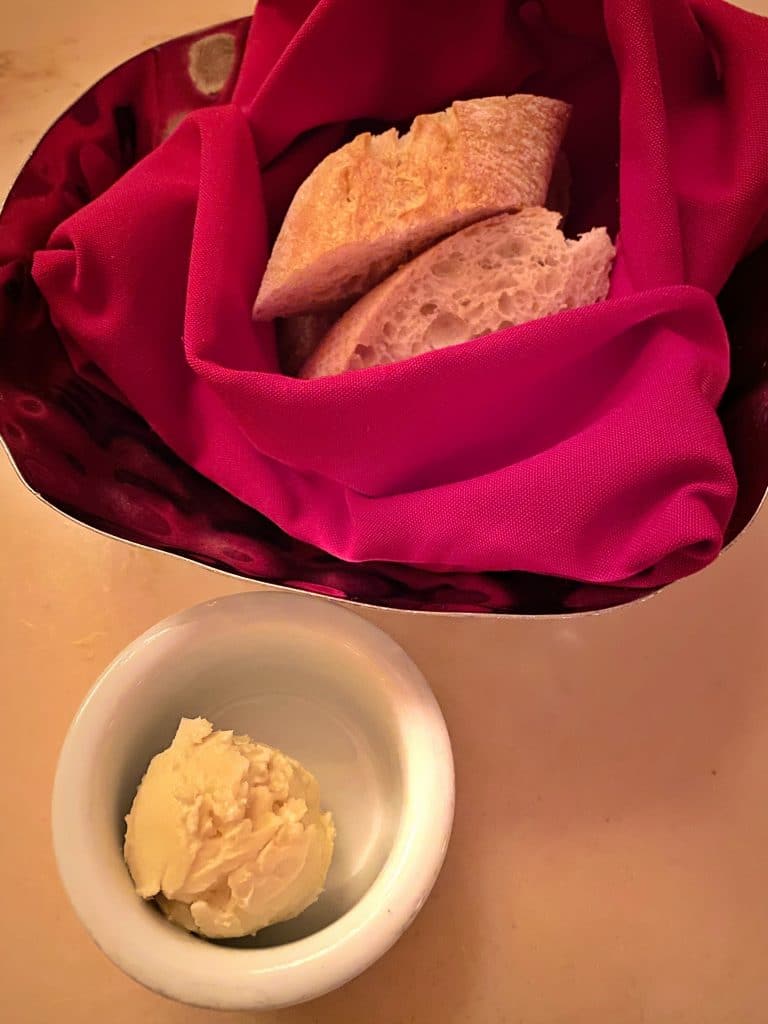 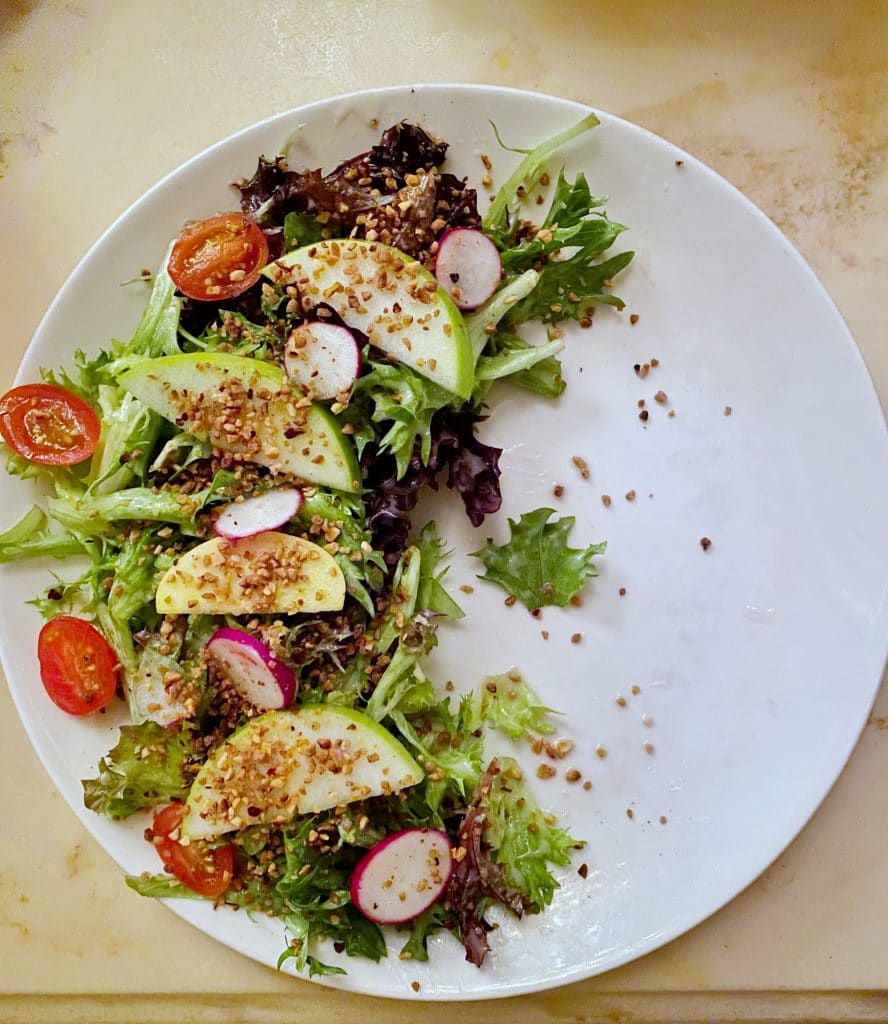 The Mixed Field Greens salad is a great choice. It is so flavorful with the sweet but tangy stone fruit vinaigrette dressing. The greens and sliced apples with the crunch of the hazelnuts is the perfect mix of textures and flavors. It’s also a lot of salad. 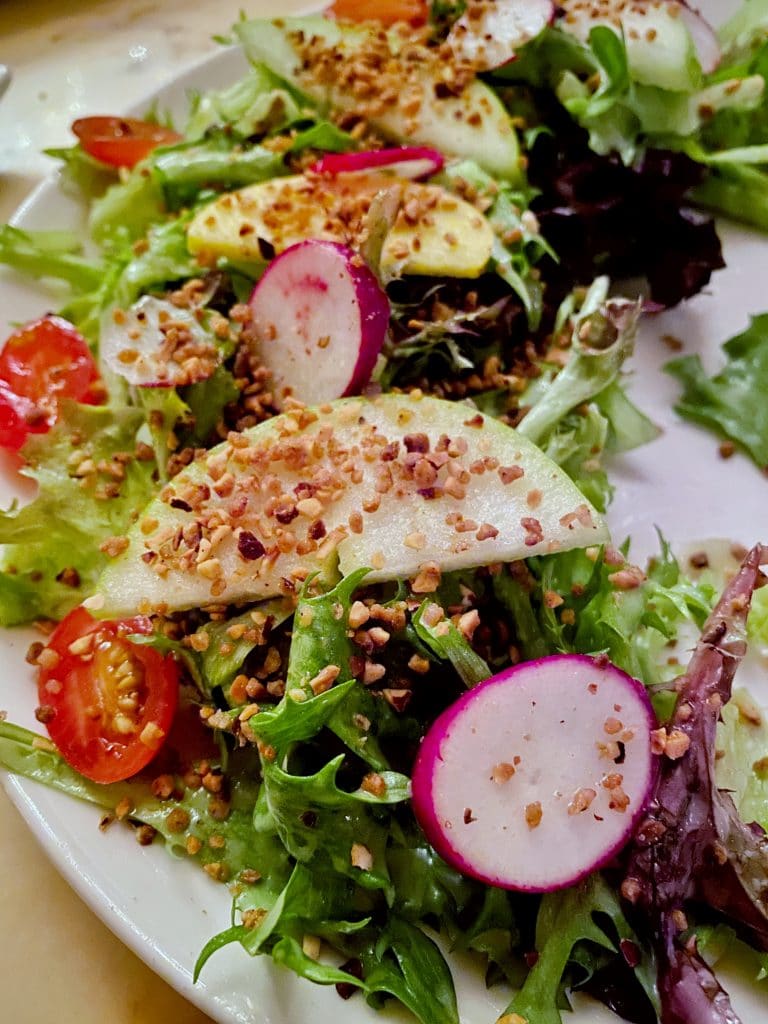 Displayed in a crescent moon shape on the plate, it may look deceiving, but there’s a lot there.

Next up is the brand new plant-based entree: Vadouvan Spiced Vegetables. This replaces the dismal option of tortellini in corn water that was definitely not a crowd favorite. 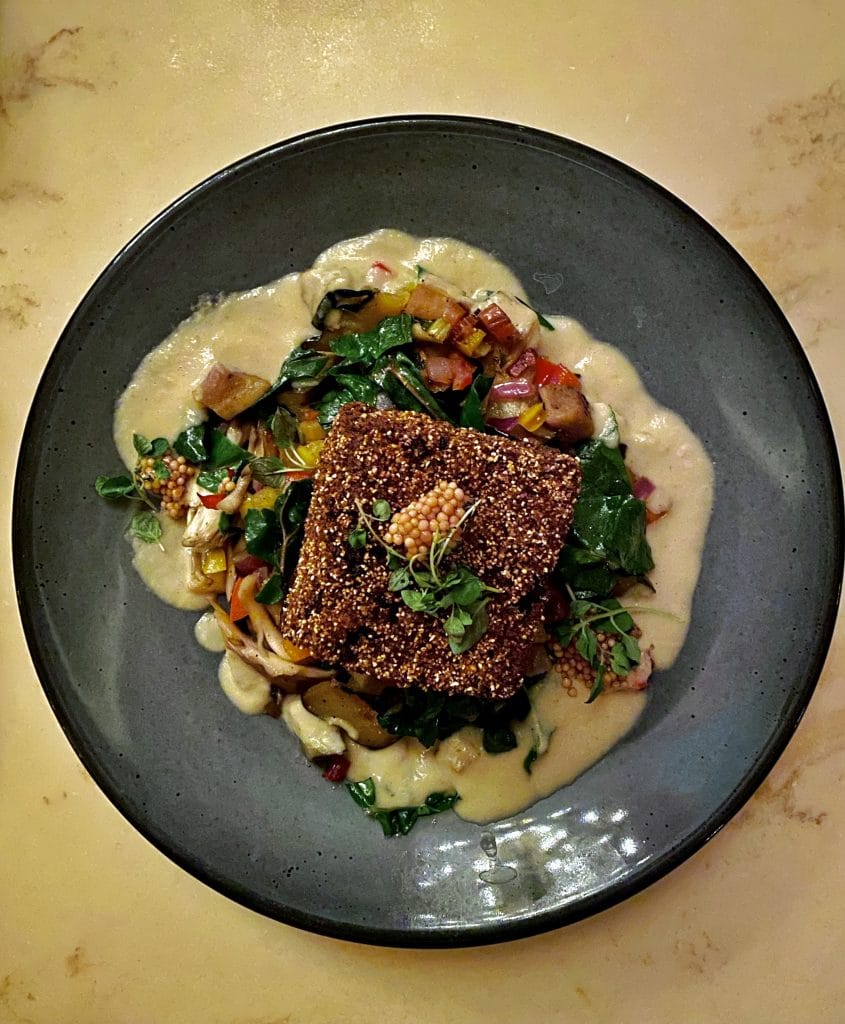 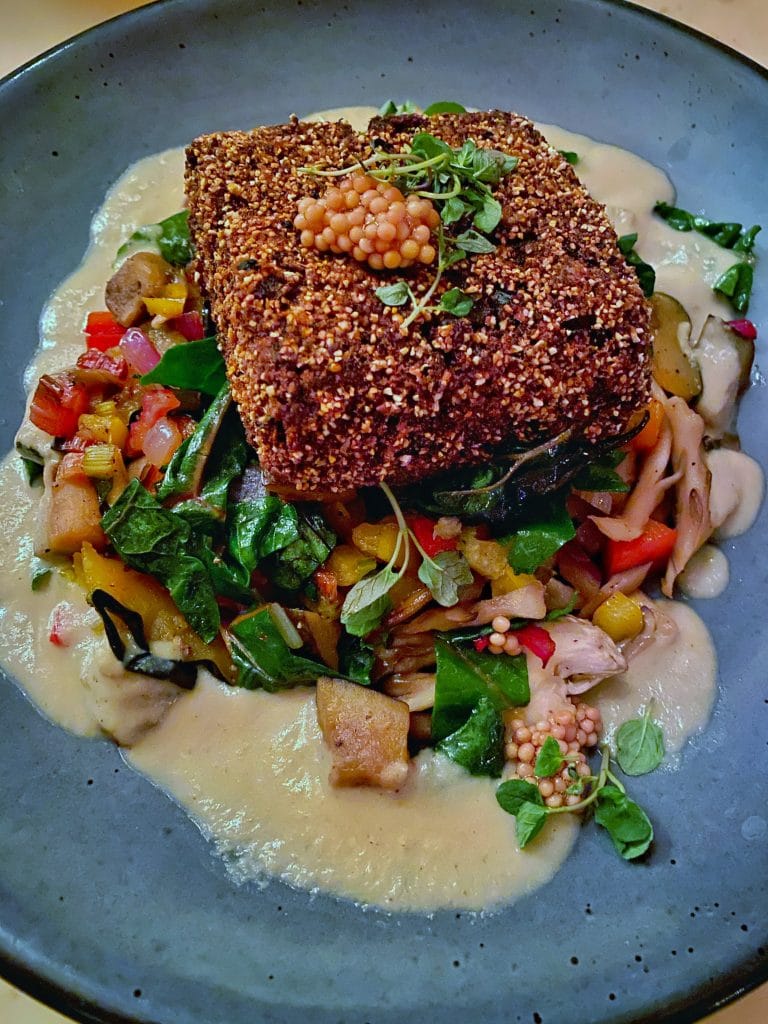 The vegetables are placed on a velvety coconut vadouvan spice curry sauce. Vadouvan is a mix of spices for curry including garlic, cumin, and fenugreek. Atop the vegetables is a savory crispy corn cake. This was such a great addition and really made the dish. Deep fried with a thick, crunchy crust, this corn cake reminded me of a hush puppy in flavor; you can taste onion and the crust has a peppery flavor. Not spicy, just a great flavor combo and not just a bland corn flavor. 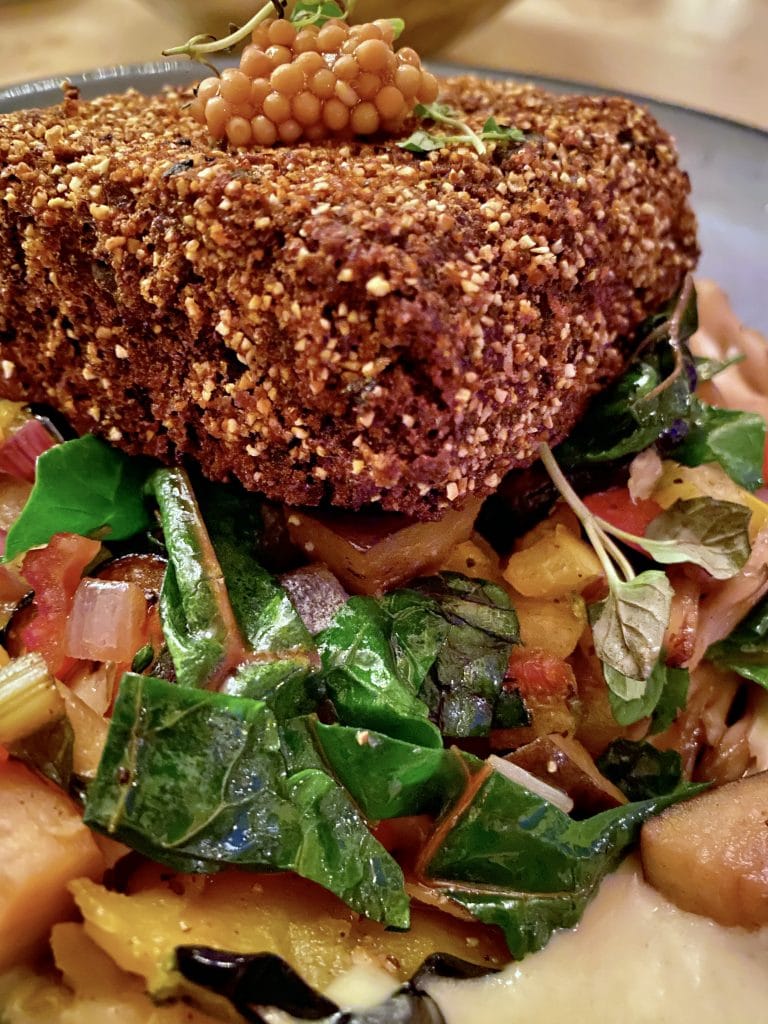 This is obviously a great upgrade from the existing option. Maybe it’s because I had been thinking about hush puppies and wishing I could have some vegan ones that this dish really spoke to me. Your mileage may of course vary. 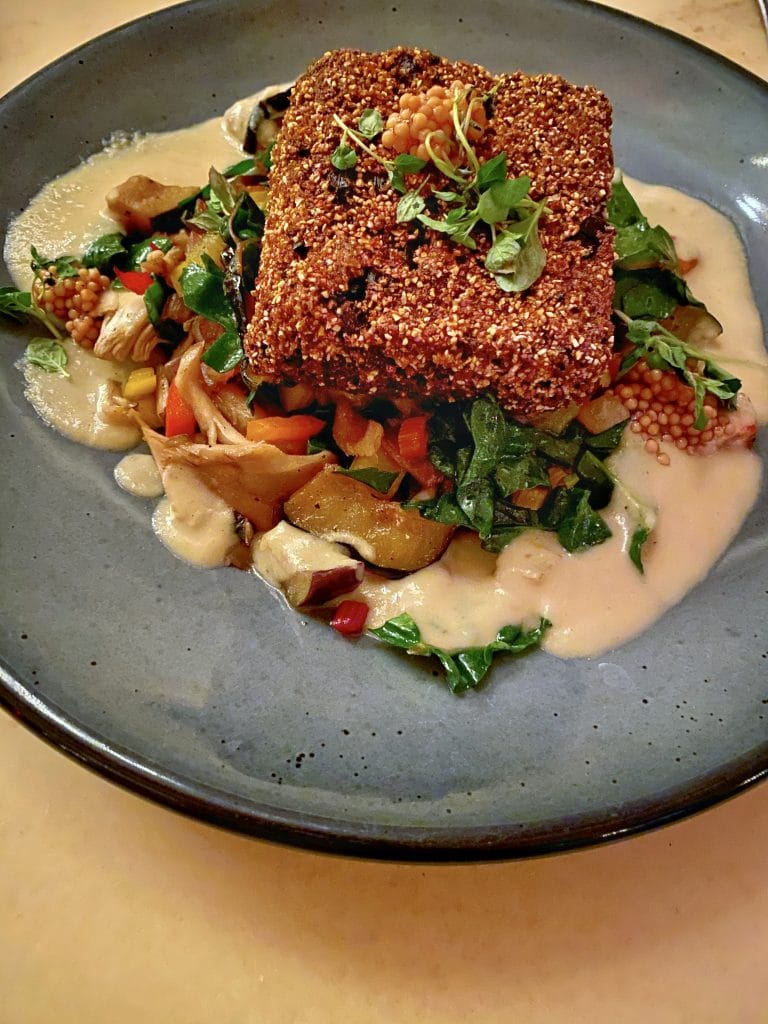 Dessert was the same as previously covered – the Vanilla Cake with Lemon Curd. It was enjoyable, and for me, just the right amount. That said, we’d be remiss if we didn’t address the cost of this experience. 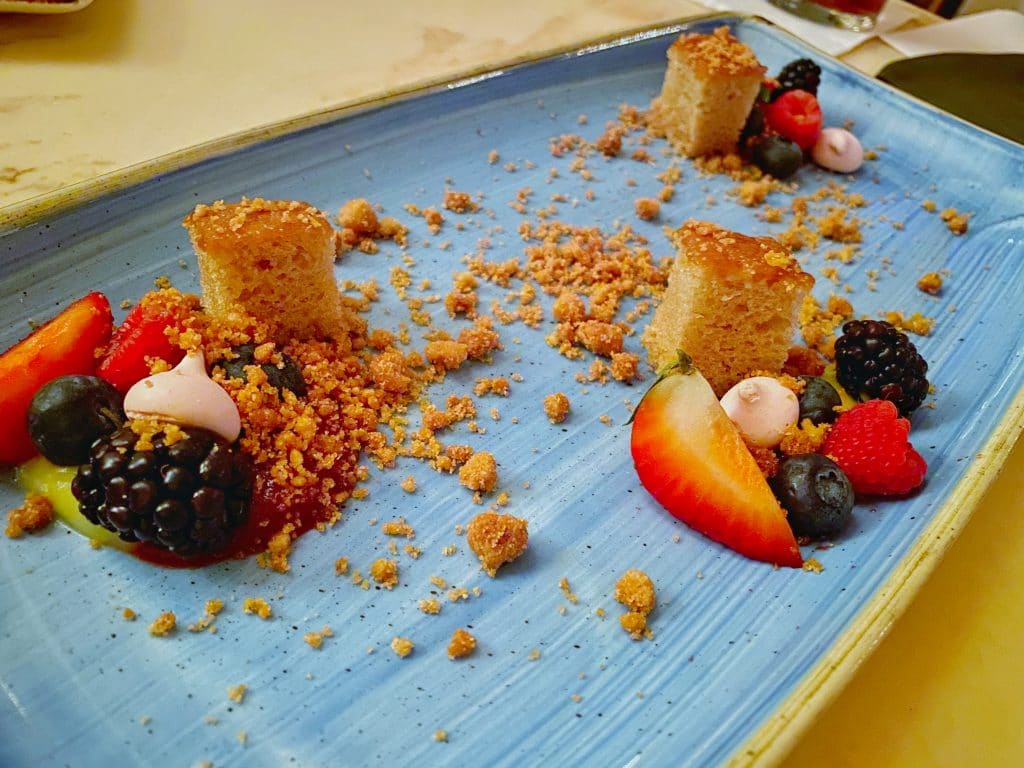 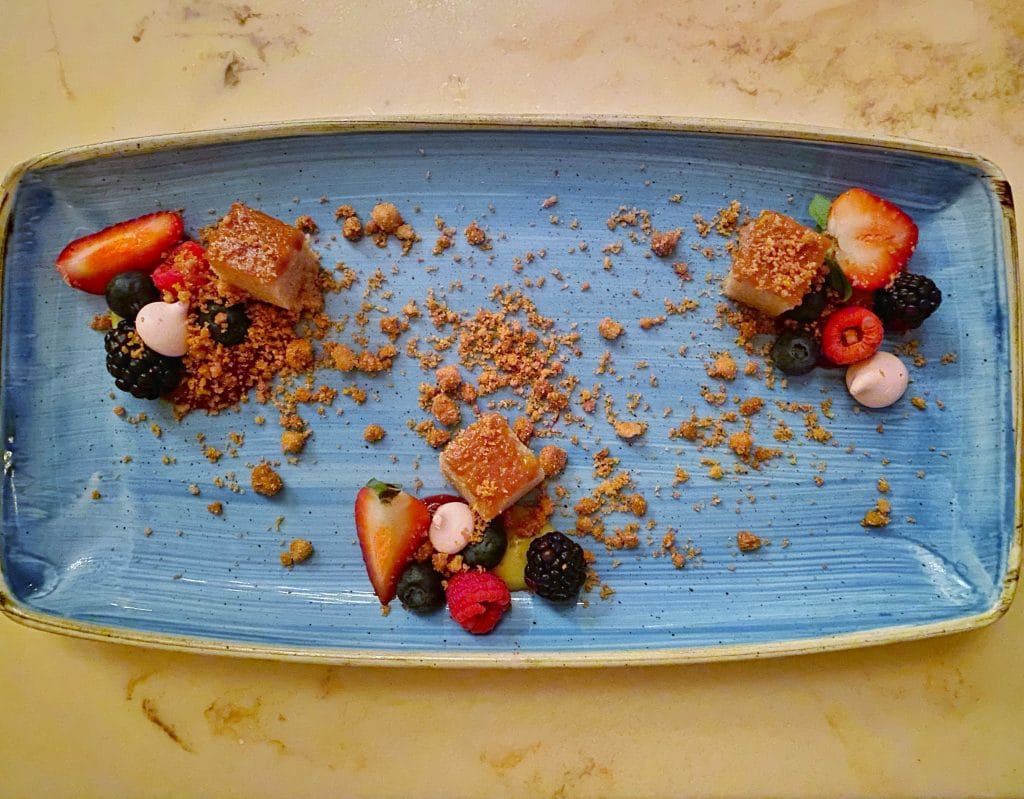 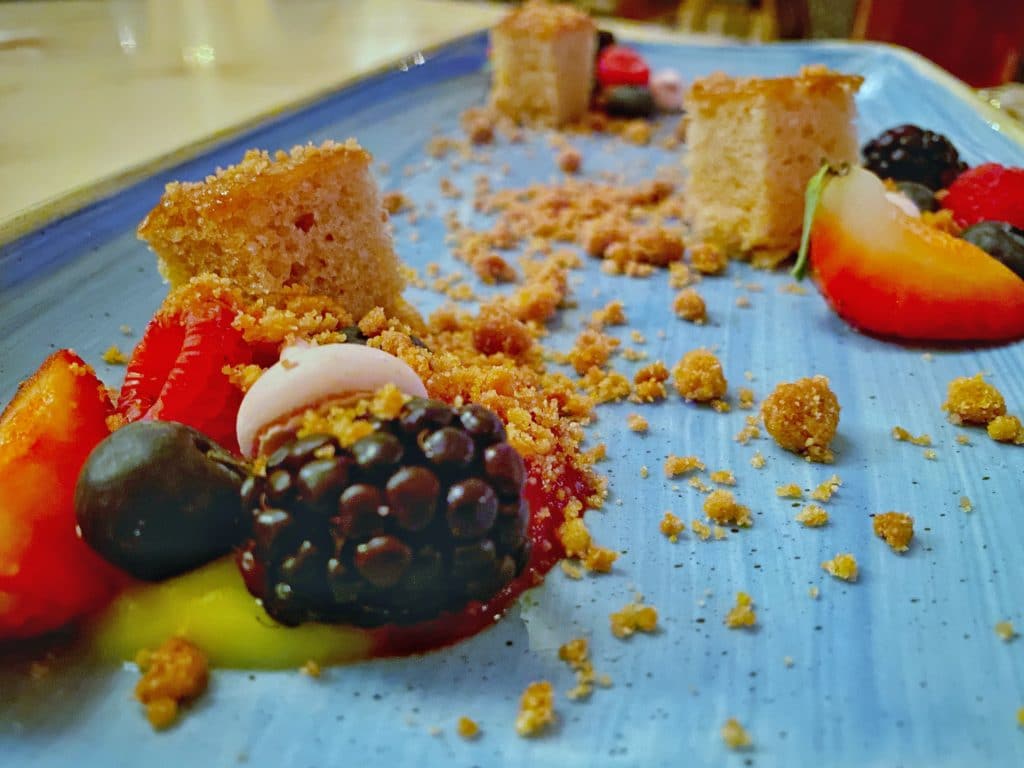 The prix fixe menu is $62 per adult, for lunch or dinner. While the vegan menu option does come with a substantial amount of food for the entrée, the rest tend to be “French style” in very small portions. It is definitely not $62 worth of food on its own.

However what you are paying for here is the experience itself. Granted, that experience has changed, as there are no longer photo or autograph opportunities with the Beast. He now comes out into the 3 dining rooms and waves to everyone from afar. (Kind of hard to take a photo when he’s constantly moving in a dimly lit room, but we tried!) 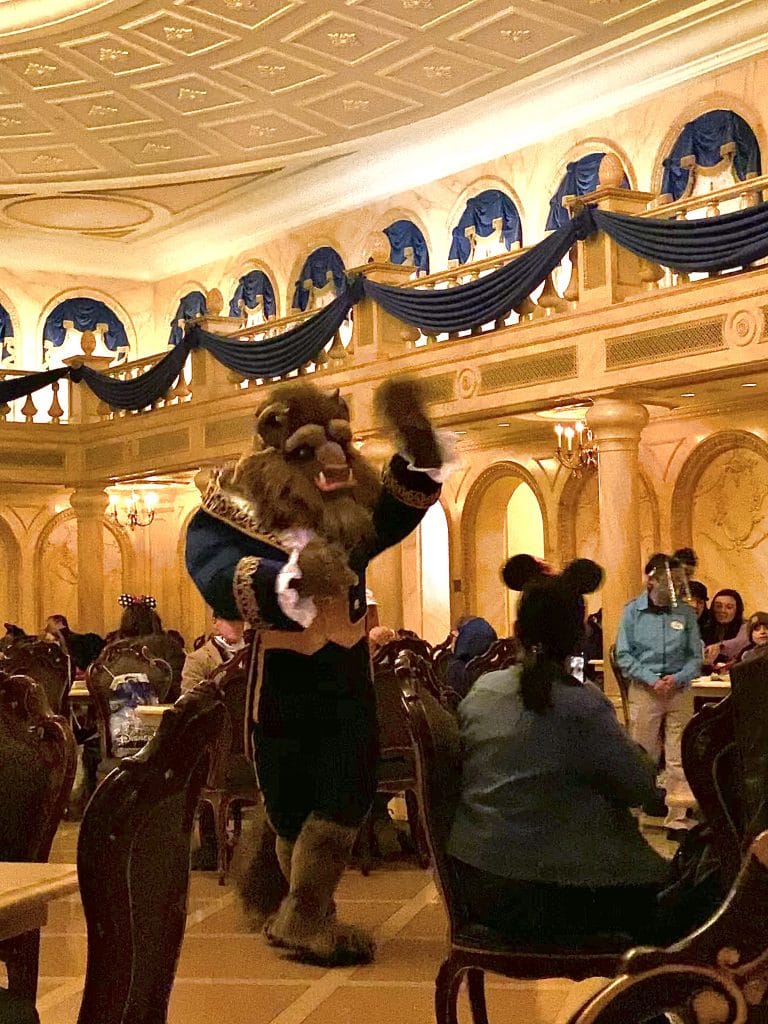 You still have the restaurant atmosphere, which is quite different than dining in a basically themed restaurant. Be Our Guest is an attraction on its own. Because of that, ADR’s can be scarce. Additionally, Disney can price it pretty much however they want, and people will go. 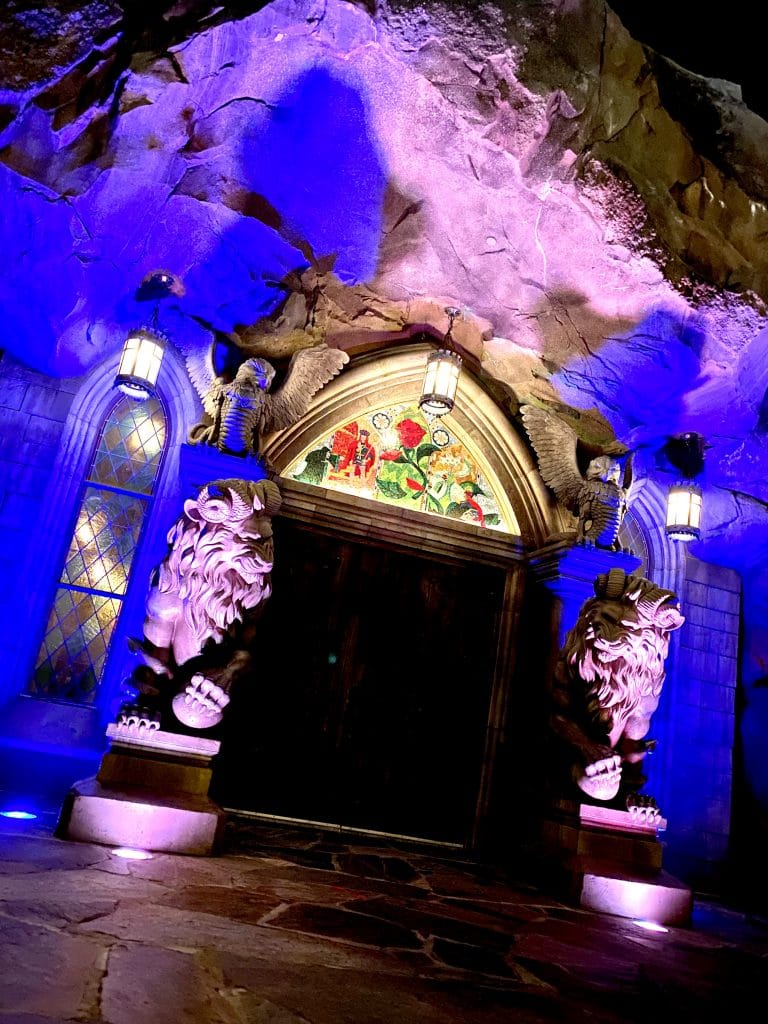 So keep that in mind when planning. If this is a visit you don’t want to miss, make sure it fits into your budget and dining plans. If the vegan menu doesn’t appeal to you, maybe wait until things return to pre-pandemic conditions. That way you can get the full character experience in addition to dining. Breakfast is also not available right now, but hopefully it will return in the near future. We’ll update here when it does.

Oh, and the best part of dining after the park closed…We were not only the last people in the restaurant, but also the last guests in the entire park. A site that I haven’t seen (outside of party nights or after hours events) since I worked in the Magic Kingdom! 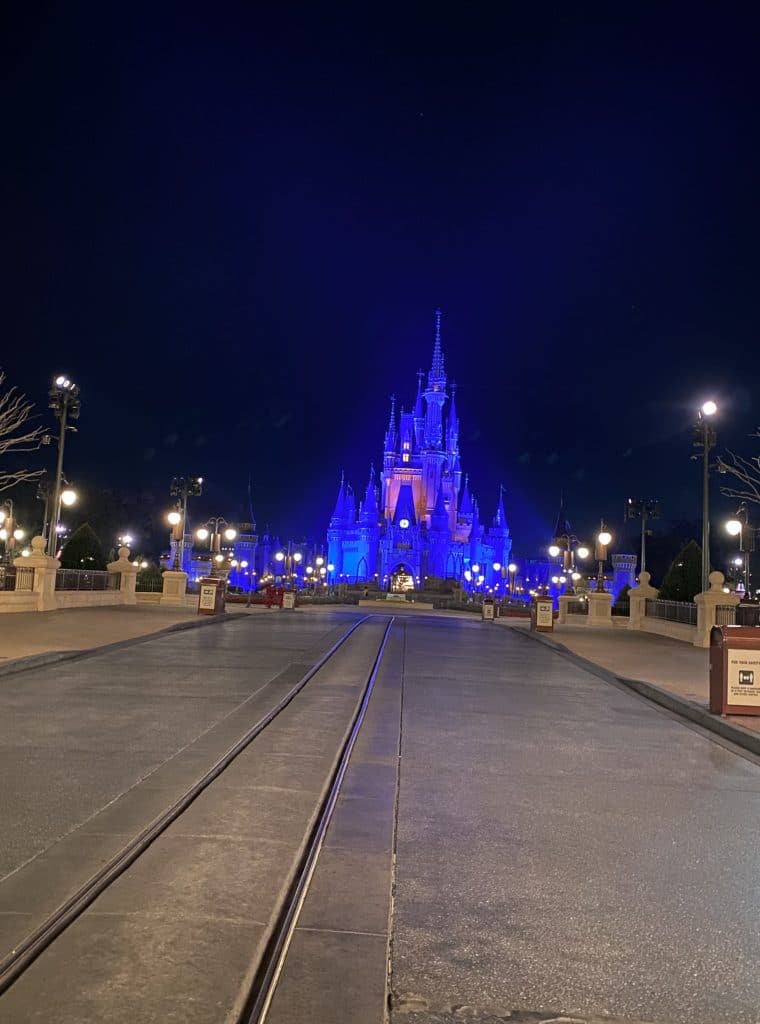 Have you been to Be Our Guest recently? What did you think? We’d love to hear about your experiences.