More than just a new dining option, Skipper Canteen offers a whole new themed area, bringing the storyline started with the Jungle Cruise attraction itself over to the “canteen.” Located in the former Adventureland Veranda space, the Jungle Navigation Co. LTD Skipper Canteen opened in 2015.

There are 3 themed rooms within the space – the Crew’s Mess Hall, the Jungle Room, and the secret area behind a bookcase (which has been propped open) which is a meeting location for S.E.A. (the Society of Explorers and Adventurers). If you visit, be sure to explore the props all around the main room, the names of the books in the bookcase area (hilarious puns and inside Disney jokes), and the decor in the S.E.A. room. Disney nerds and history buffs will not be disappointed.

Skipper Canteen has offered several vegan choices since opening, which is why it is a much beloved table service option among plant-based park goers. The Falls Family Falafel appetizer, (no longer available are the Perkins Thai Noodles and  Shirki Noodle Salad), and Curry Vegetable Stew are all great choices. And there’s a plant-based dessert too!

The Jungle Green Salad (from the depths of the Jungle…Skipper Bill’s Iceberg Wedge with Shishito Peppers, Radish, Hearts of Palm, Cucumbers, and Pistachios), can be made vegan by replacing the yogurt dressing for oil and vinegar.

Currently with the pandemic conditions and capacity limits, the Shiriki Noodle Salad is not on the menu, but should return as the park returns to normal. The rest of the options are still there, as well as a new vegan seasonal soup option: the Lost and Found Soup. 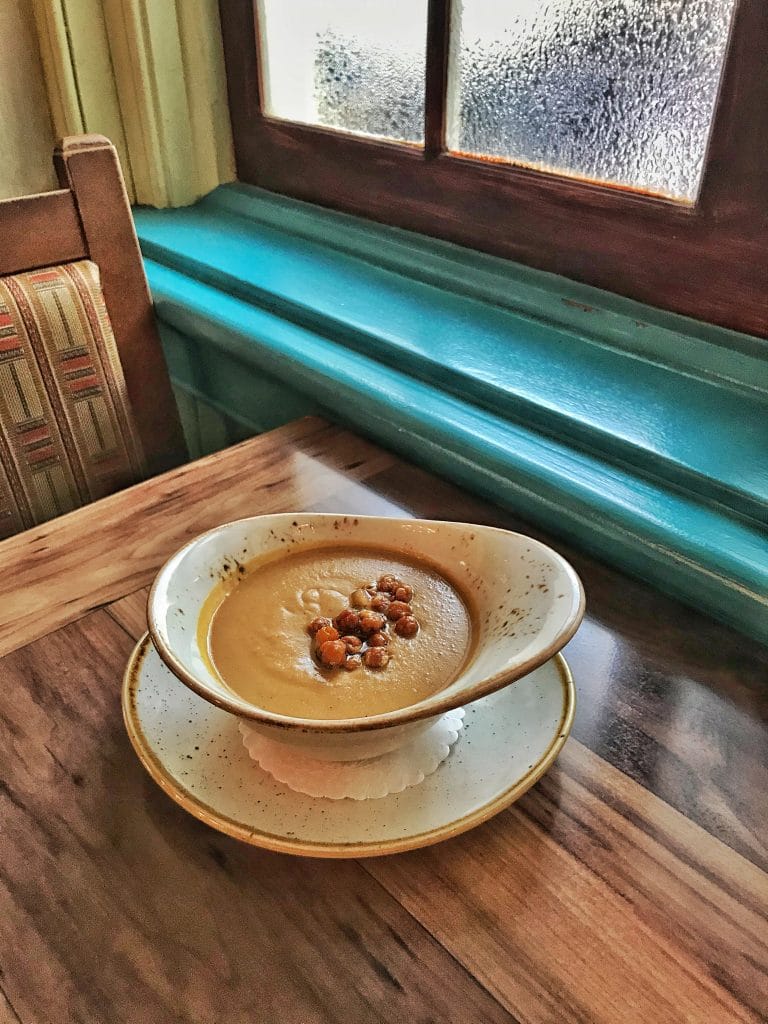 Since it is seasonal, this may change and not be vegan when it does, but for now, it is 100% vegan as is! UPDATE: It has been updated and is still vegan! It is now Carrot Ginger soup. The Chickpea Soup is (as you might imagine) blended Berber spiced chickpeas, seasoned with Berber spices and onions. There is no dairy of any kind, or even plant-based milk. The soup is topped with fresh tomato relish and fried chickpeas for a unique crunchy texture. 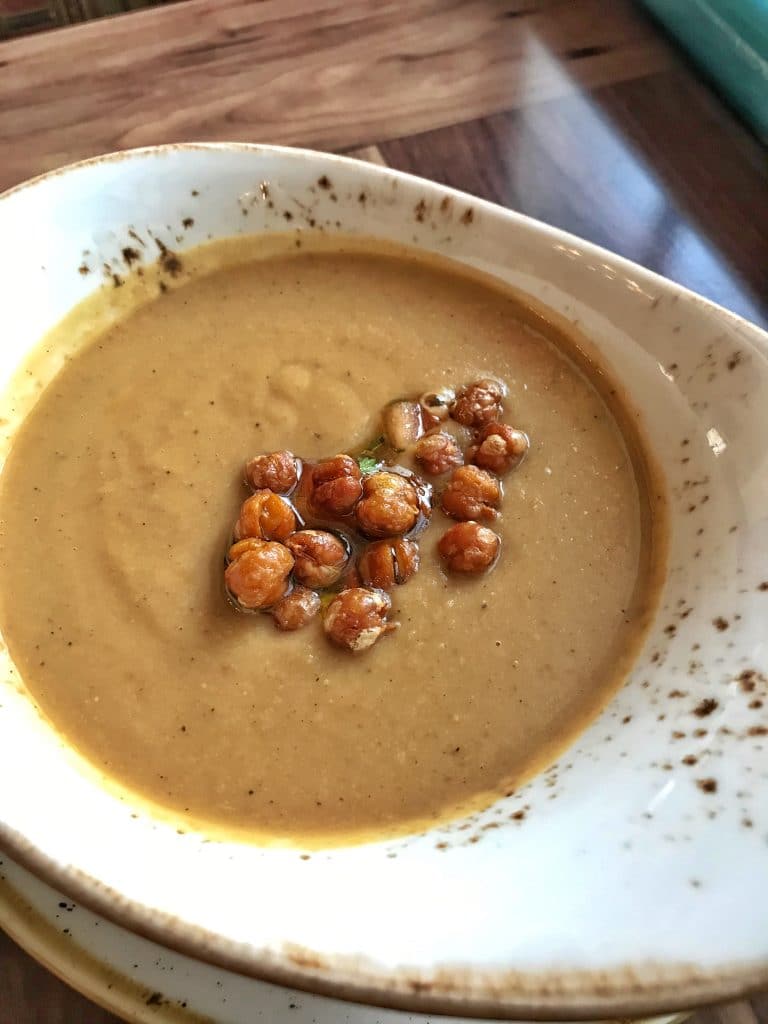 When this was initially brought onto the menu a reviewer noted it was bland and flavorless. I’m not sure if the Canteen chefs read that review, but our soup was far from bland and flavorless. If anything, it was a little on the salty side. We thoroughly enjoyed it, however and would definitely order it again. Head to our Carrot Ginger soup review to see the newest option! 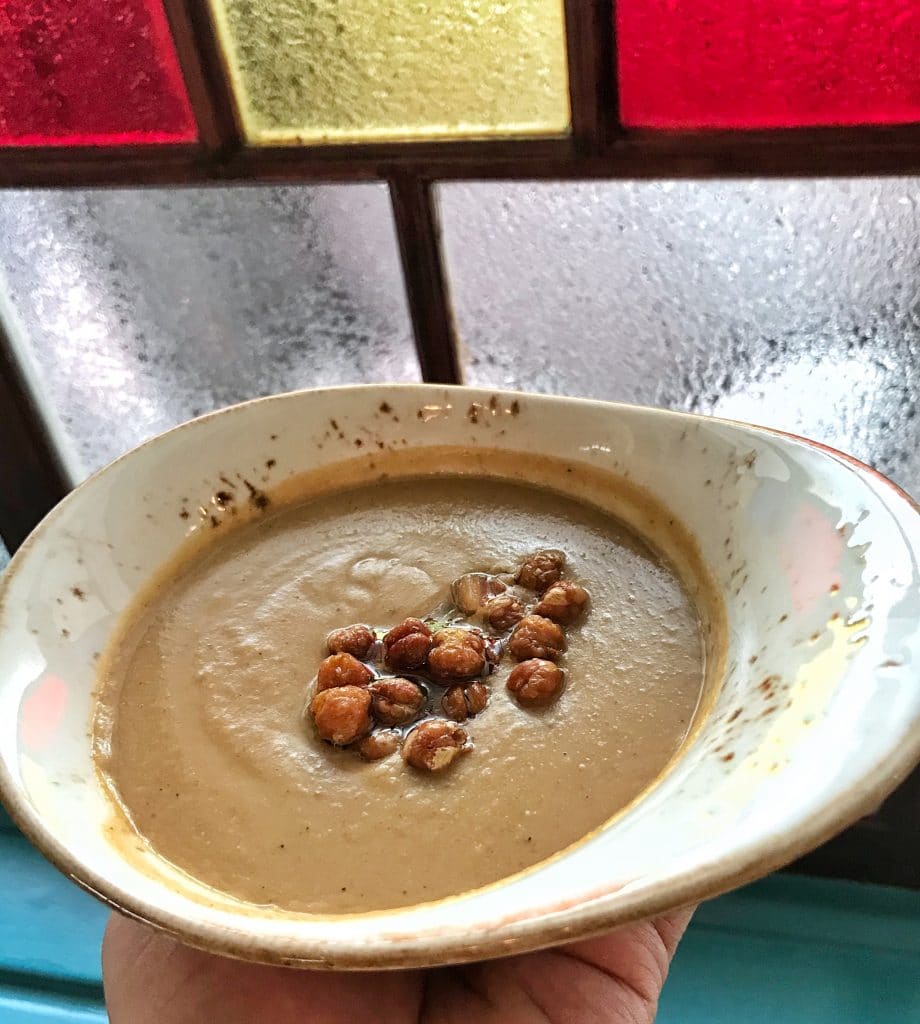 Having the soup AND the Falls Family Falafel might be a little chickpea overload, so if choosing between the two, we’d still go with the falafel which are amazing. A secret recipe of Chickpeas, Garlic, Onions, Lemon Juice, and Herbs served with House-made Edamame Hummus and Toasted Pumpkin Seeds. 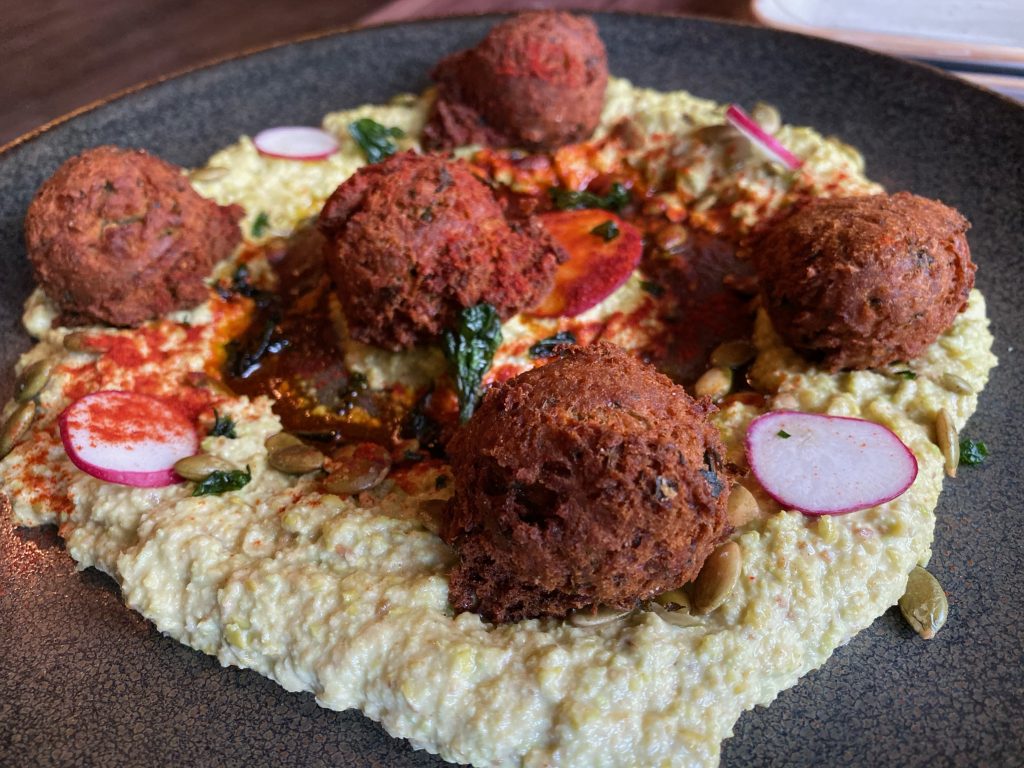 Previously on the menu were the Perkins Thai Noodles: Tofu, Seasonal Vegetables, and Rice Noodles tossed in a Spicy Soy-Chili-Garlic Sauce. A favorite of our friend Pamelia Perkins, Adventurers Club President. We loved these and miss them! We now have Dan Dan Noodles, which can be modified to be vegan. You can read all about them at that link! 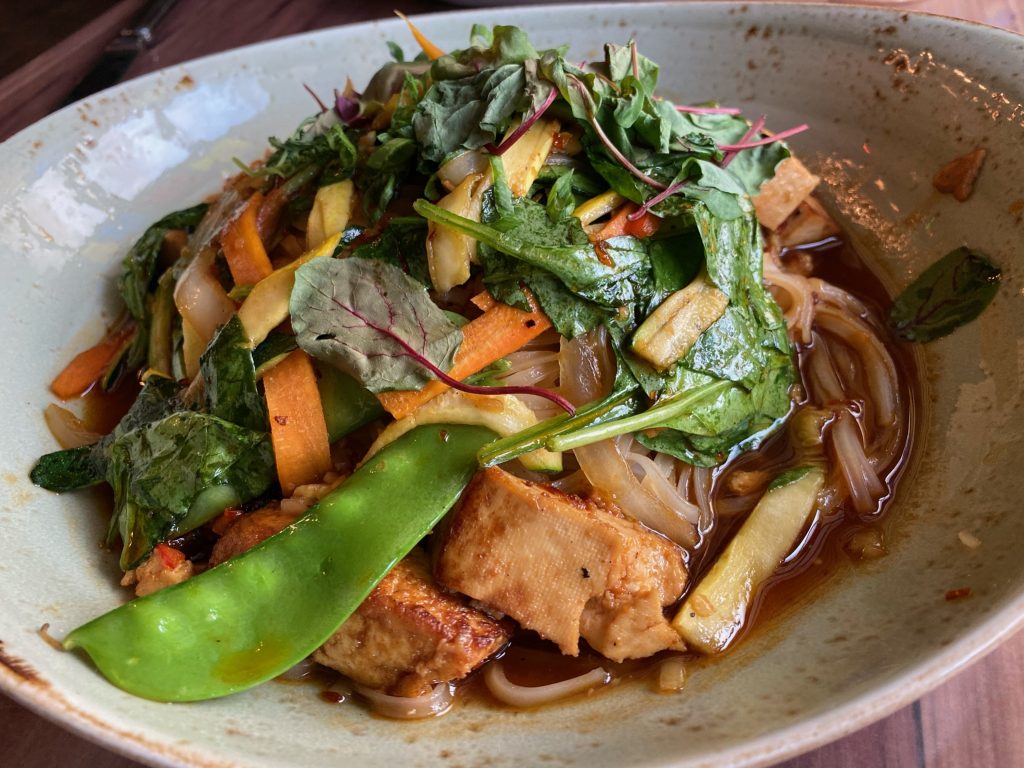 The Curried Vegetable Crew Stew: A favorite of the Crew Stew Crew (especially Stu). Seasonal Vegetables and Pineapple Tofu in a House-made Curry Sauce served with Coconut Rice. We have a difficult time choosing which combination of appetizers and entrees to get! If you can go with a close friend or family member and share, all the better!

We do hope we’ll see the Shiriki Noodle Salad return sooner than later, it was a favorite. Rice noodles, edamame beans, mushrooms, green mango, and cucumber tossed in a sweet chili sauce. Watch our VeganDisneyFood instagram for if this dish returns! 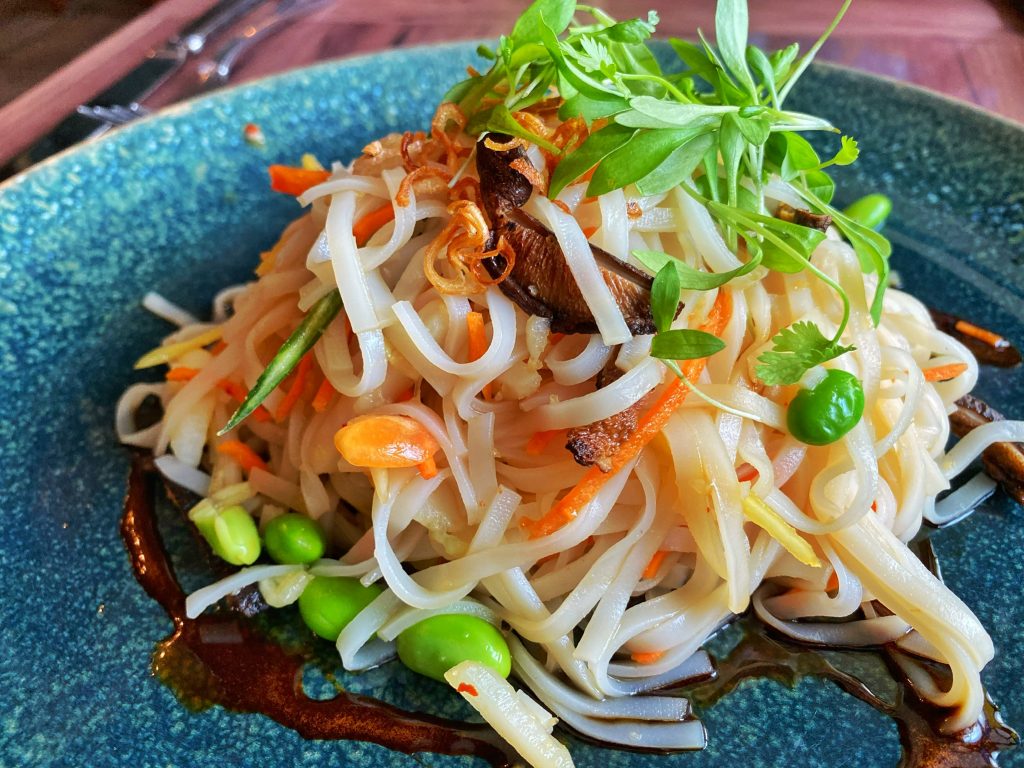 And be sure to leave room for dessert with the Panna Connie’s Congo Lime Delight!

All in all, you can’t go wrong with vegan options at Skipper Canteen. Unique, filling choices, vegan as is. Let us know if you visit this Magic Kingdom favorite!