We sampled all of the vegan lunch options at Primo Piatto in Disney’s Riviera Resort at Walt Disney World and here’s what we thought. 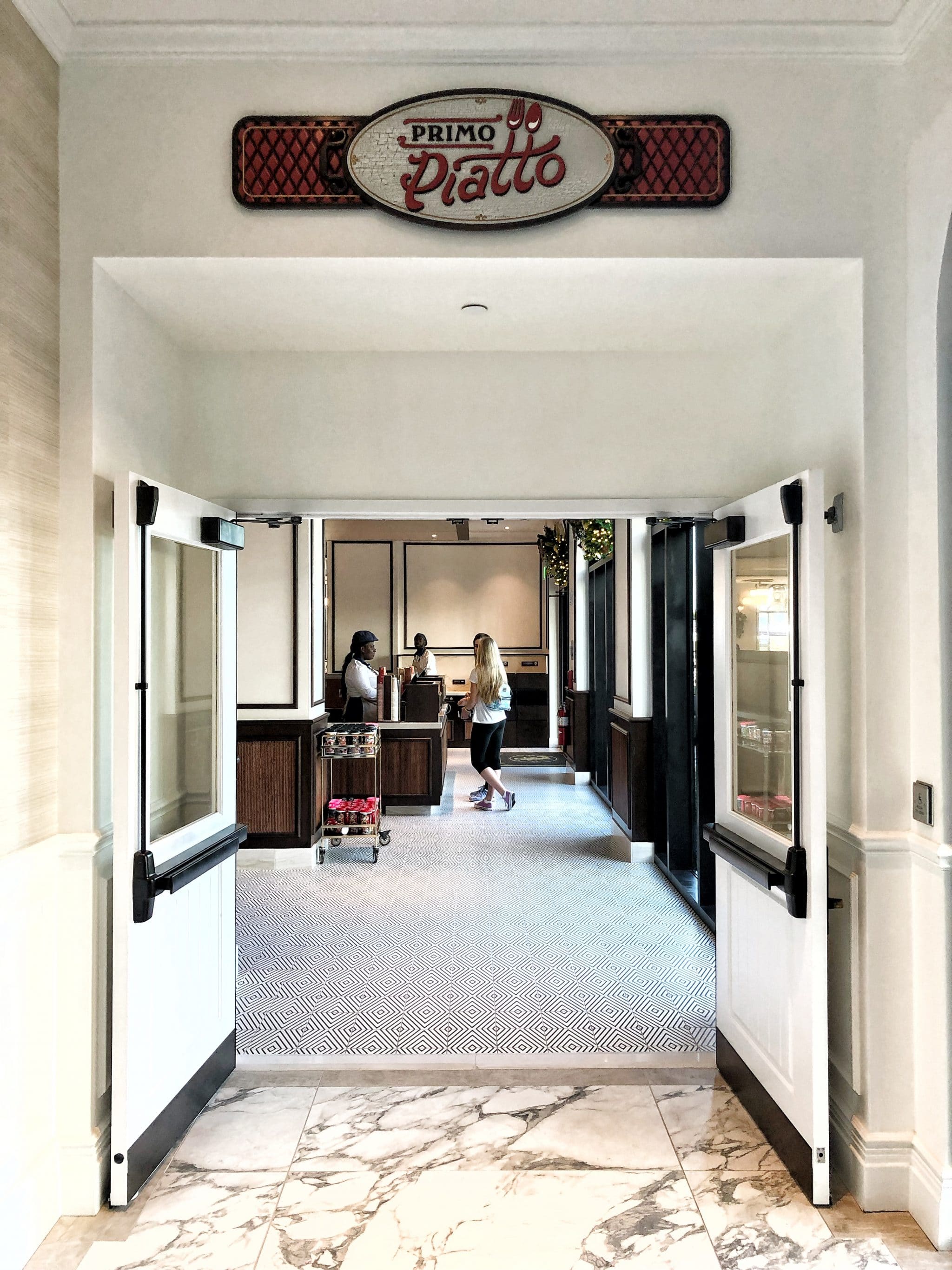 Primo Piatto is slightly more upscale than most quick service locations in that guests order from a cast member and then are provided a pager to take to the table of their choosing where a food runner will bring their selections to them when they are prepared.

The restaurant’s dining room is rather cozy with limited indoor seating including free standing tables as well as one single high top family style table and banquettes located around the perimeter. 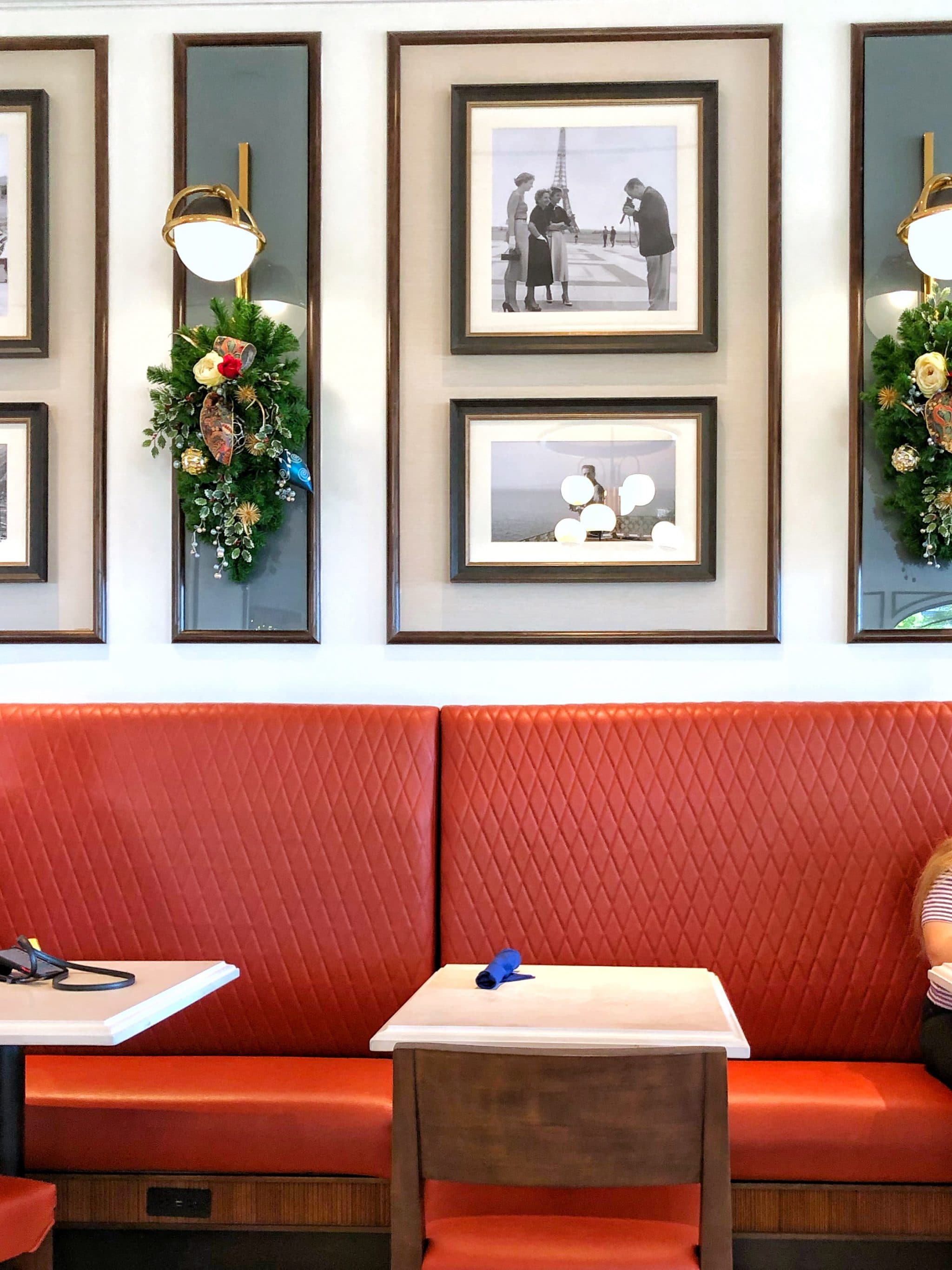 It has a bright and open feel with a fair amount of natural light and an open show kitchen. 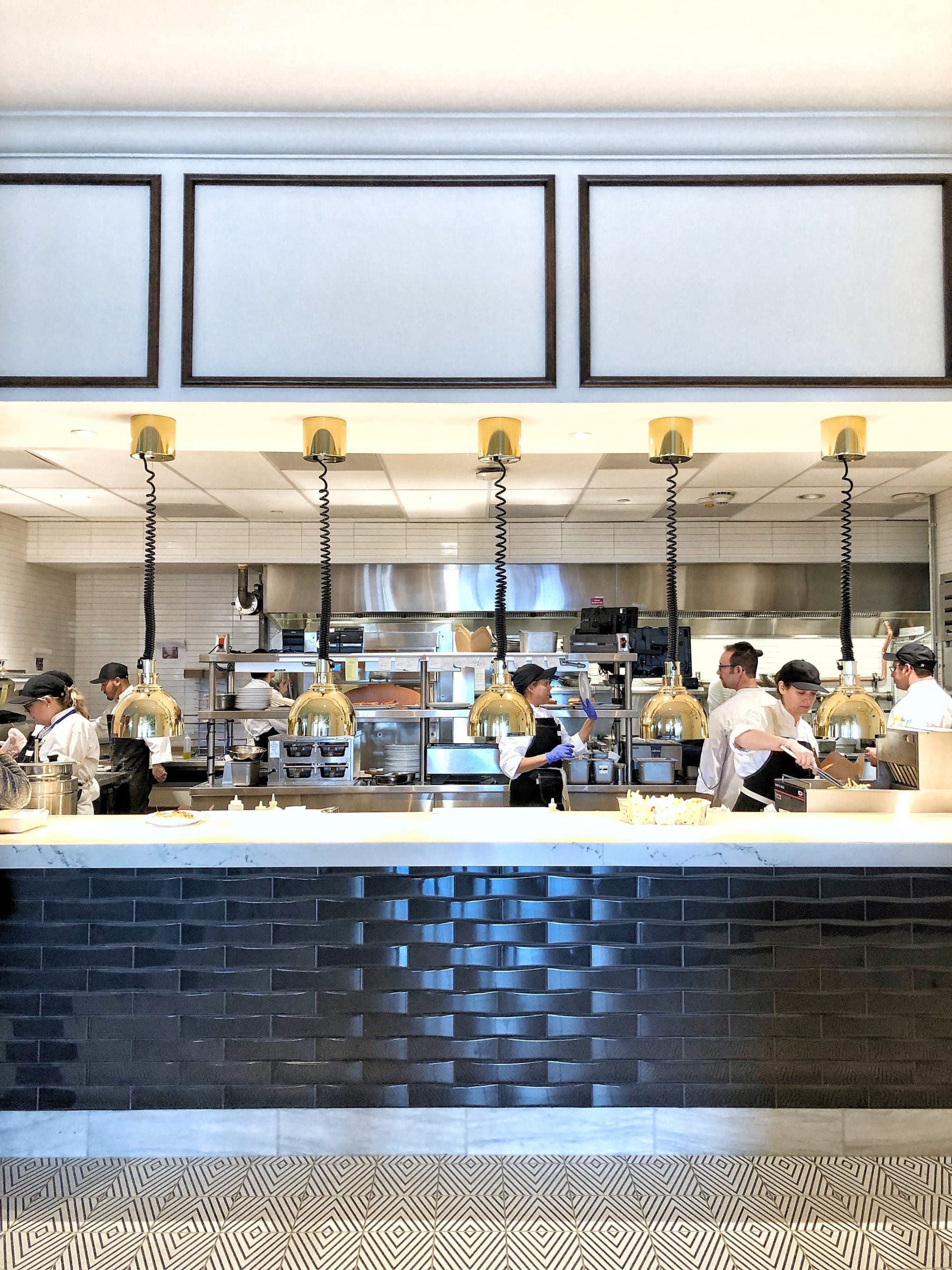 Beverages are self serve and the restaurant is outfitted with two coke freestyle machines. 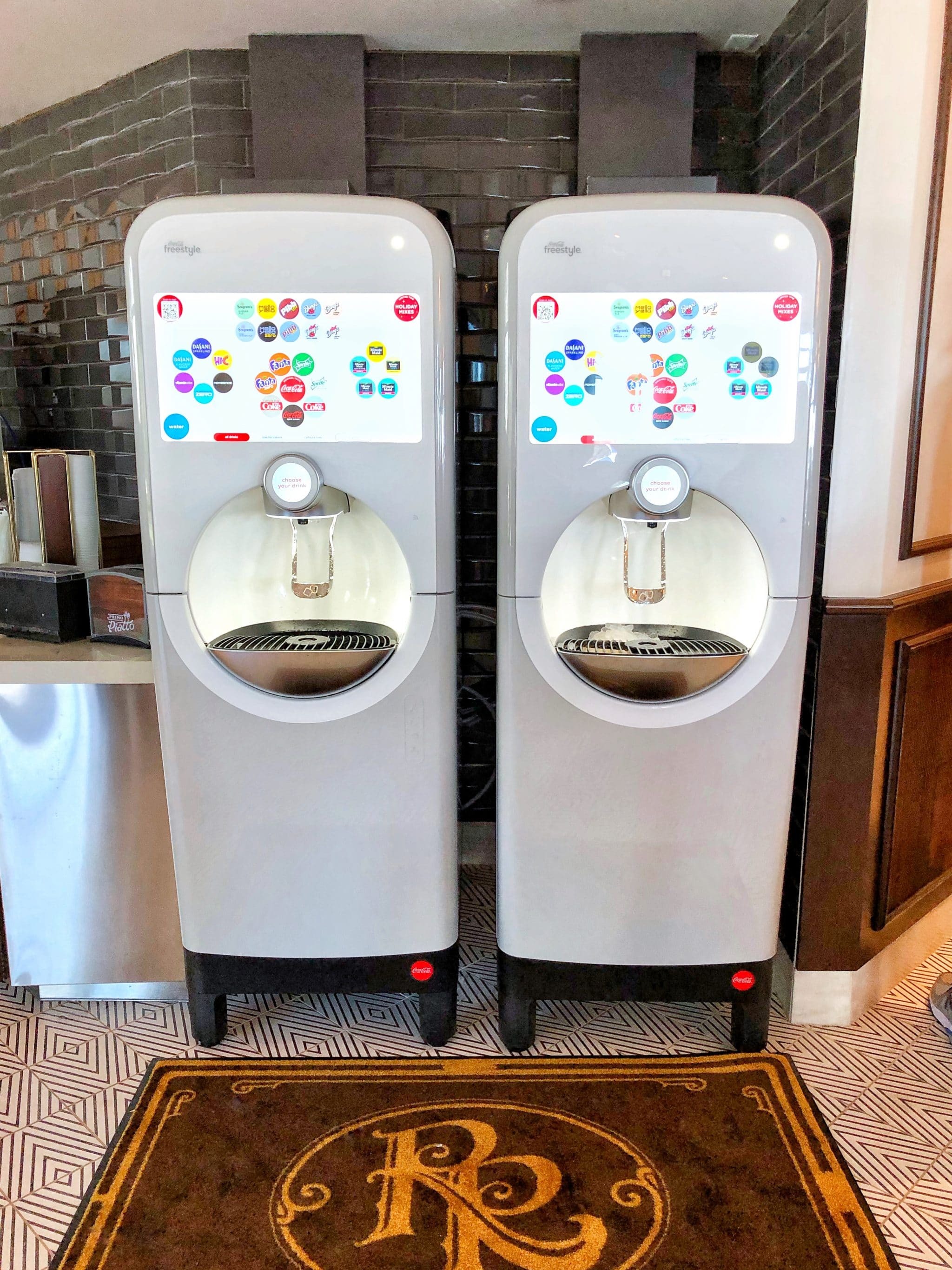 There is also a separate grab-n-go section with its own cashier but vegan options were nothing of note here.

Our favorite  option was the Grilled Vegetable Skewer ($12.99) off of the “Entrees” section of the menu. 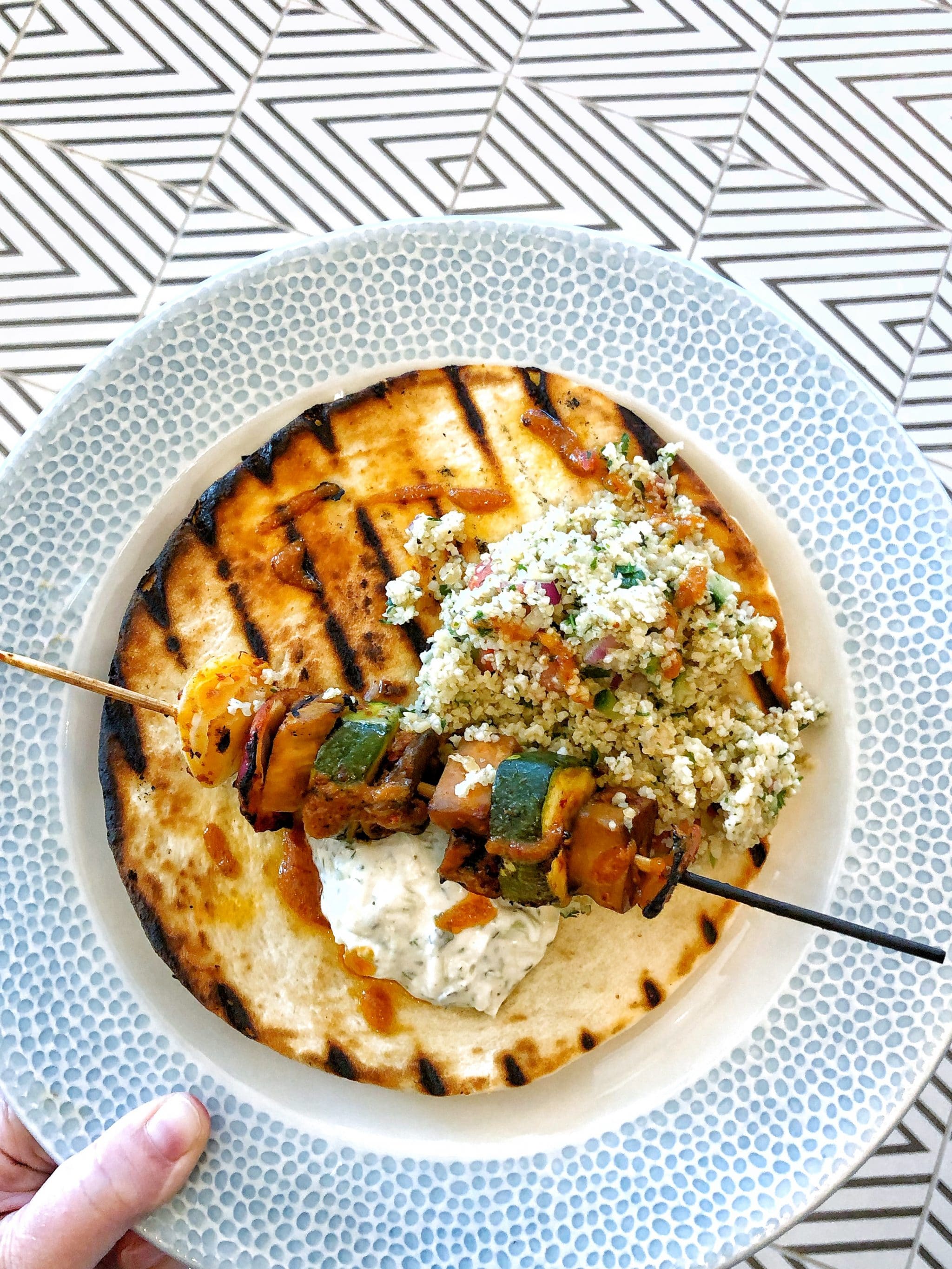 We wish this was described differently on the menu because it was so much more than just a skewer. I’d go so far as to call it a giant Mediterranean taco. It was so large that we ended up sliding the vegetables off the skewer and eating it like a gyro. 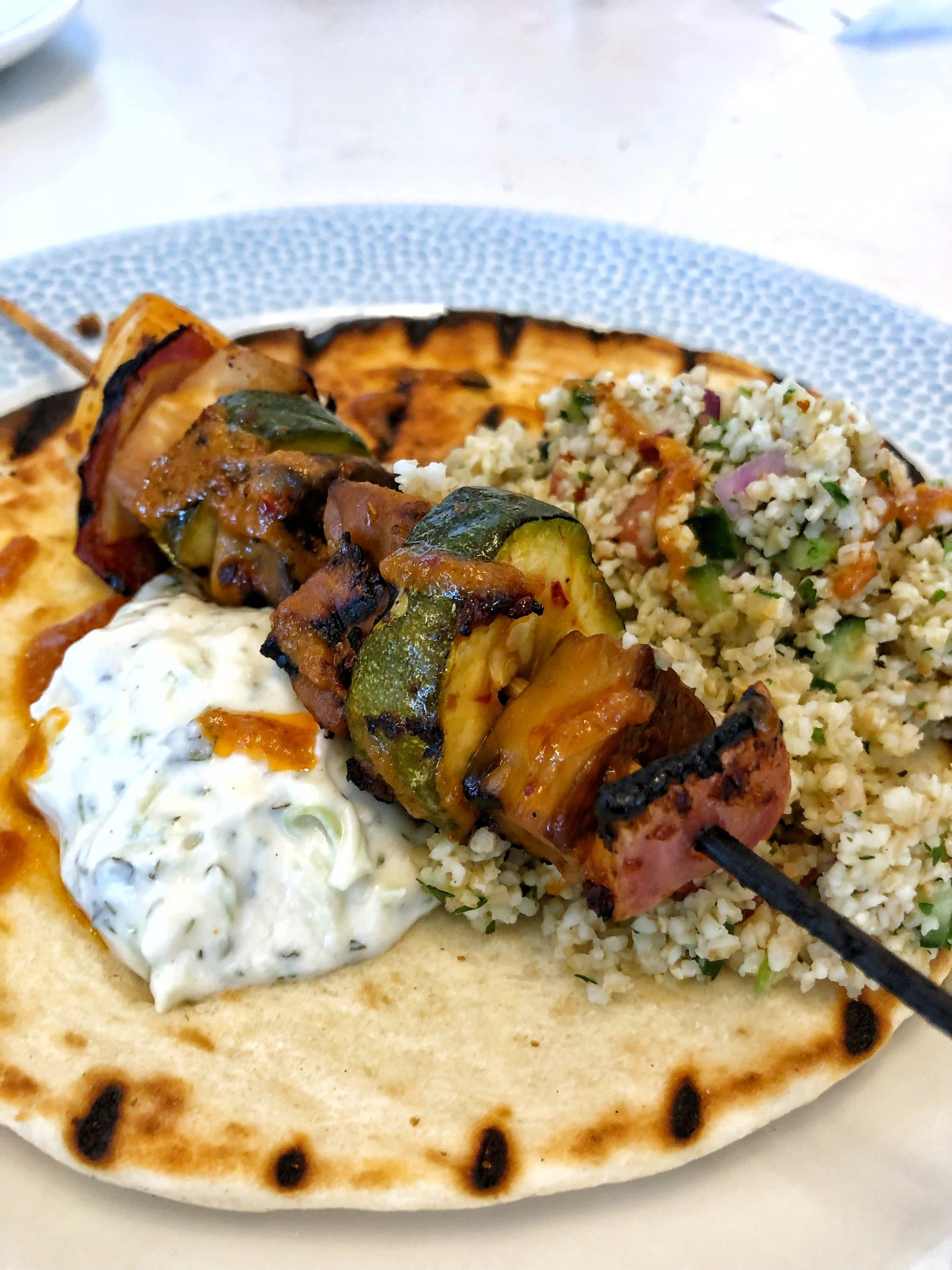 This dish starts with a warm, grilled vegan pita. The pita is topped with a cool tomato bulgur salad. Next to it you’ll find a skewer of grilled onion, zucchini and eggplant. The sauce is a vegan cucumber yogurt.

I’ve been dreaming about the dish ever since this day.

The next option is the Farm Fresh Pizza ($11.99) off of the “Hearth Baked Pizzas” section of the menu. 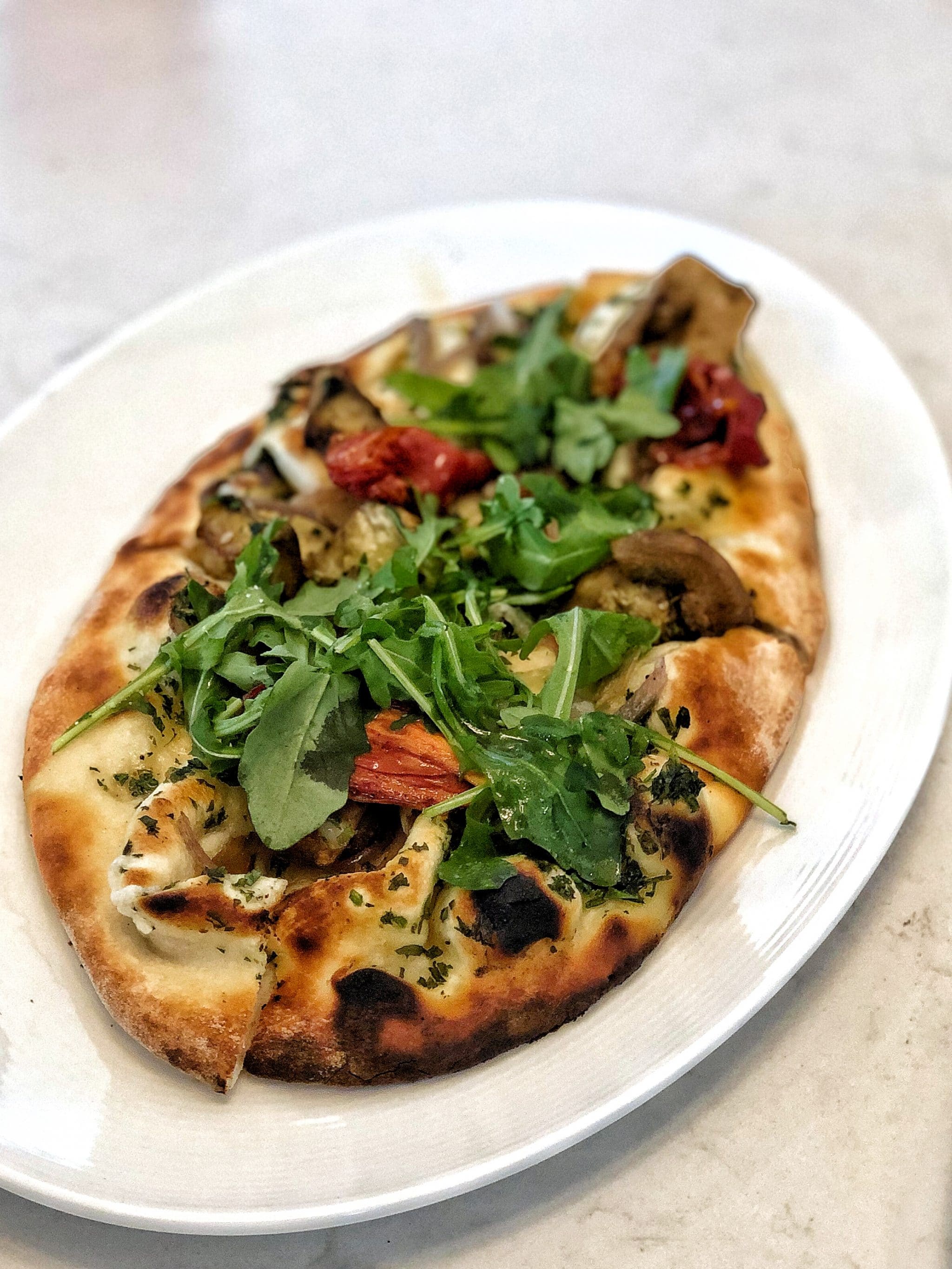 This was our least favorite offering.

This was the absolute driest thing in the world. You can see from the photos that there was only a scant bit of pesto base and maybe three shreds of vegan cheese on the bottom left corner. 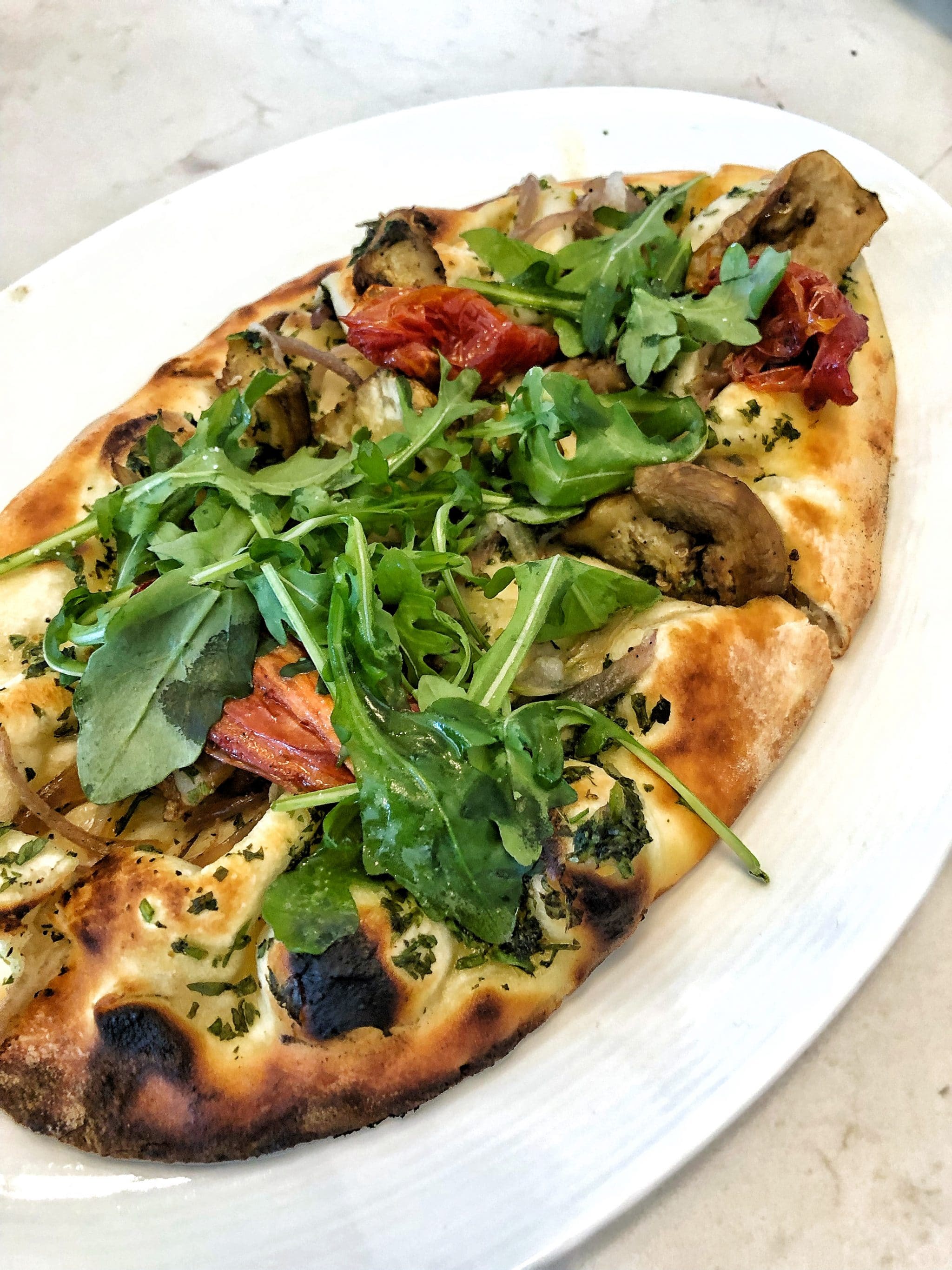 We ate one bite and threw the rest away. My girlfriend Suzannah tried a slice of mine and said that her’s was completely different so maybe it just depends on which chef is making your pie and how liberal they are with the toppings.

EDIT: On a subsequent visit our pizza was prepared differently. You can see our thoughts in this vlog.

The last vegan as-is item is from the “Kids’ Meals” section of the menu.

Here you have the Linguine with Tomato Sauce ($6.99). This comes with a side of sliced grape tomatoes, fruit cup and a drink. 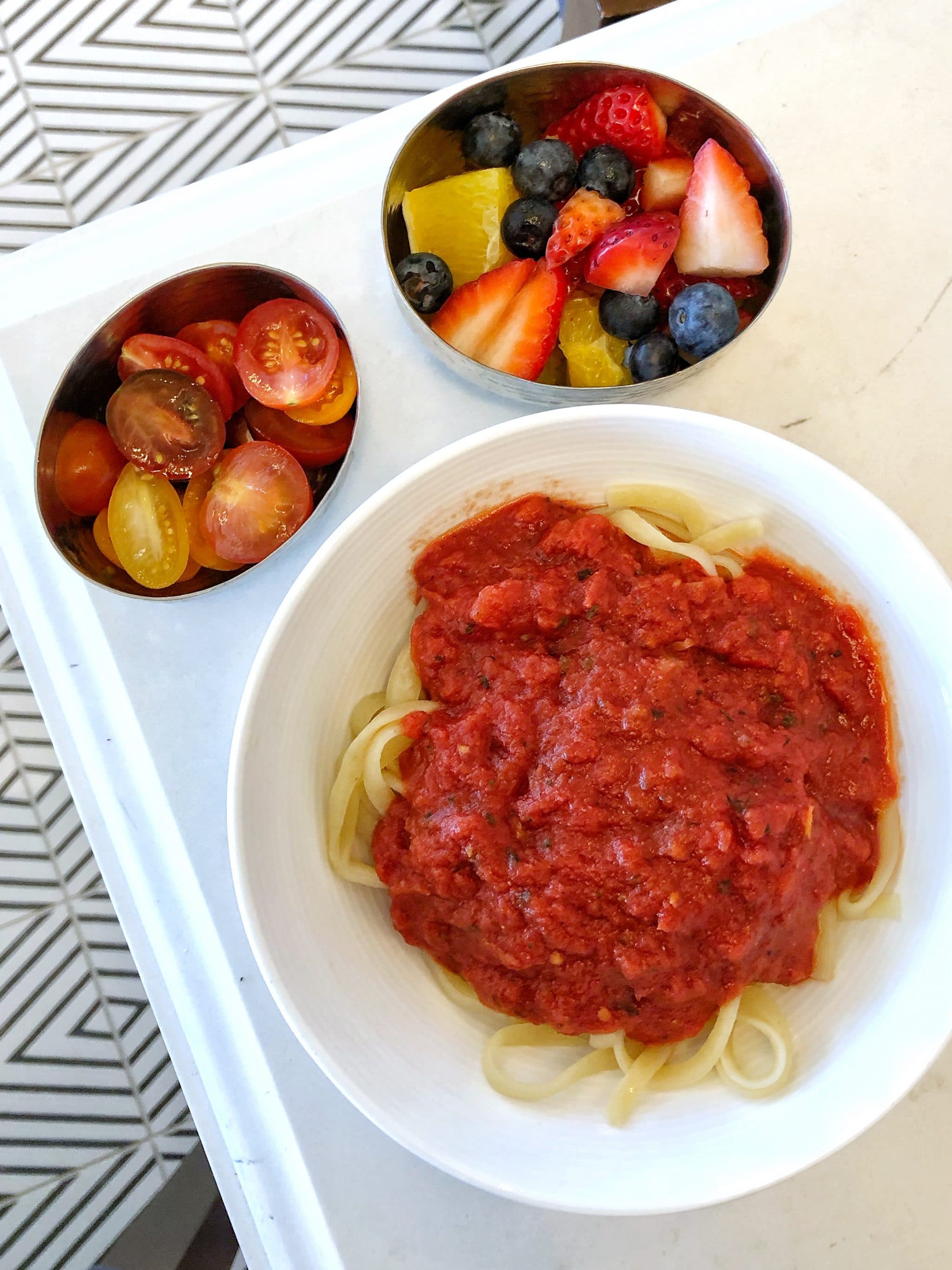 When this dish was originally run out to the table it was covered in Parmesan cheese…and not the vegan kind.

Because the kitchen was open and I could see a chef standing outside of it calling out orders I approached him with my pasta and asked if this was how the dish was supposed to be plated since the plant based leaf symbol was printed next to it on the menu board.

He assured me that it was NOT and said that was a mistake made by the kitchen. I have to mention that this was opening day and it was very chaotic inside the restaurant.

He took my plate and a few minutes later a correct bowl was run to my table. This new bowl of pasta was about twice the size of the original bowl so please keep that in mind when looking at the serving size. 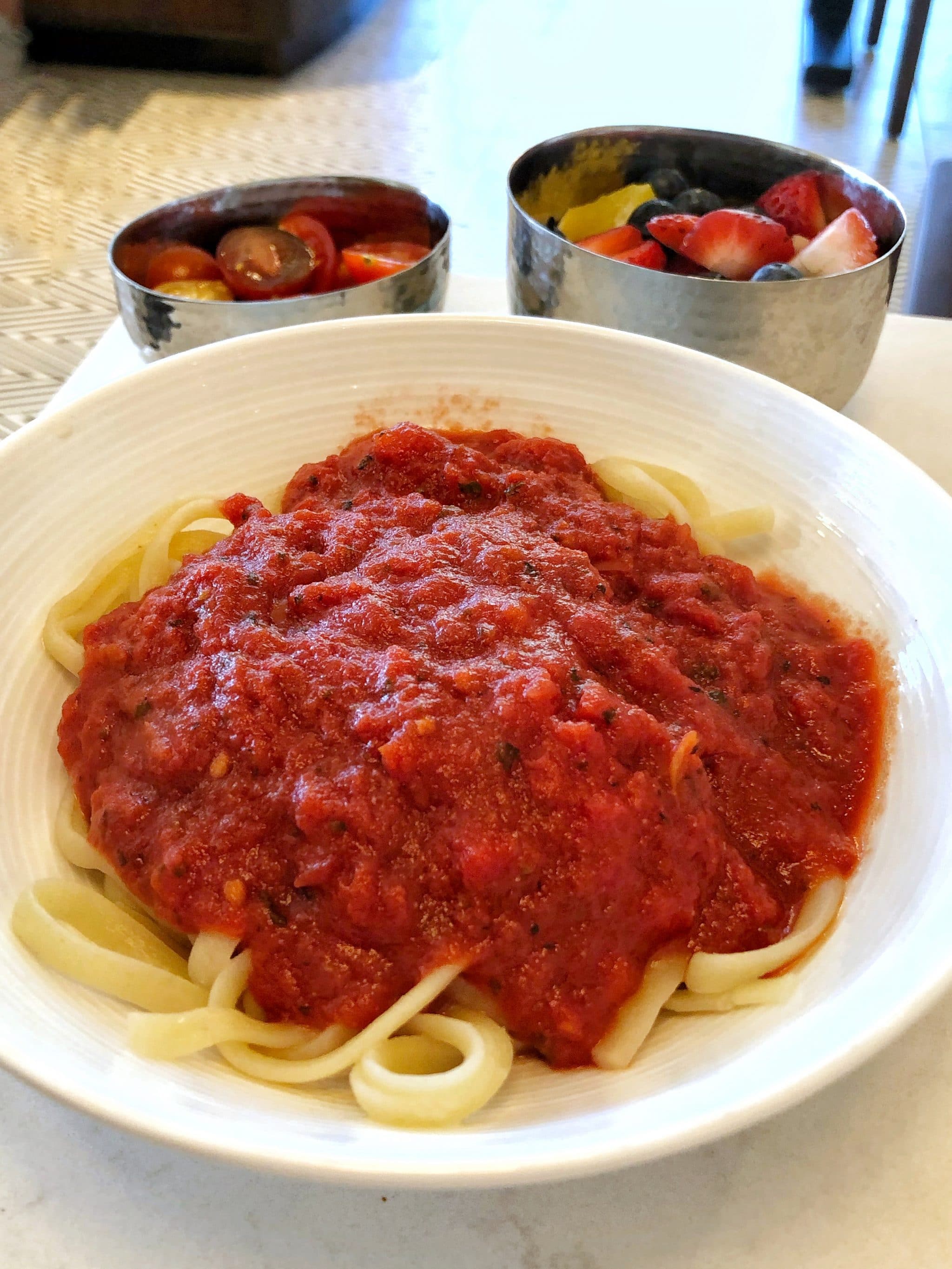 I thought the pasta was cooked well and loved the flavor of the marinara sauce.

I’d like to come back and give that vegan pizza another chance. However….I’d be hard pressed to not order the Veggie Skewer again on any subsequent visits.

Because this is quick service and no reservations are required I doubt that you’d be allowed to drive your own vehicle and park here for lunch as security has been tightened with parking at the Skyliner accessible resorts. This leaves you with the option of bussing in or taking the Skyliner over from Epcot or Disney’s Hollywood Studios.

Definitely put lunch at Primo Piatto on your must try list. 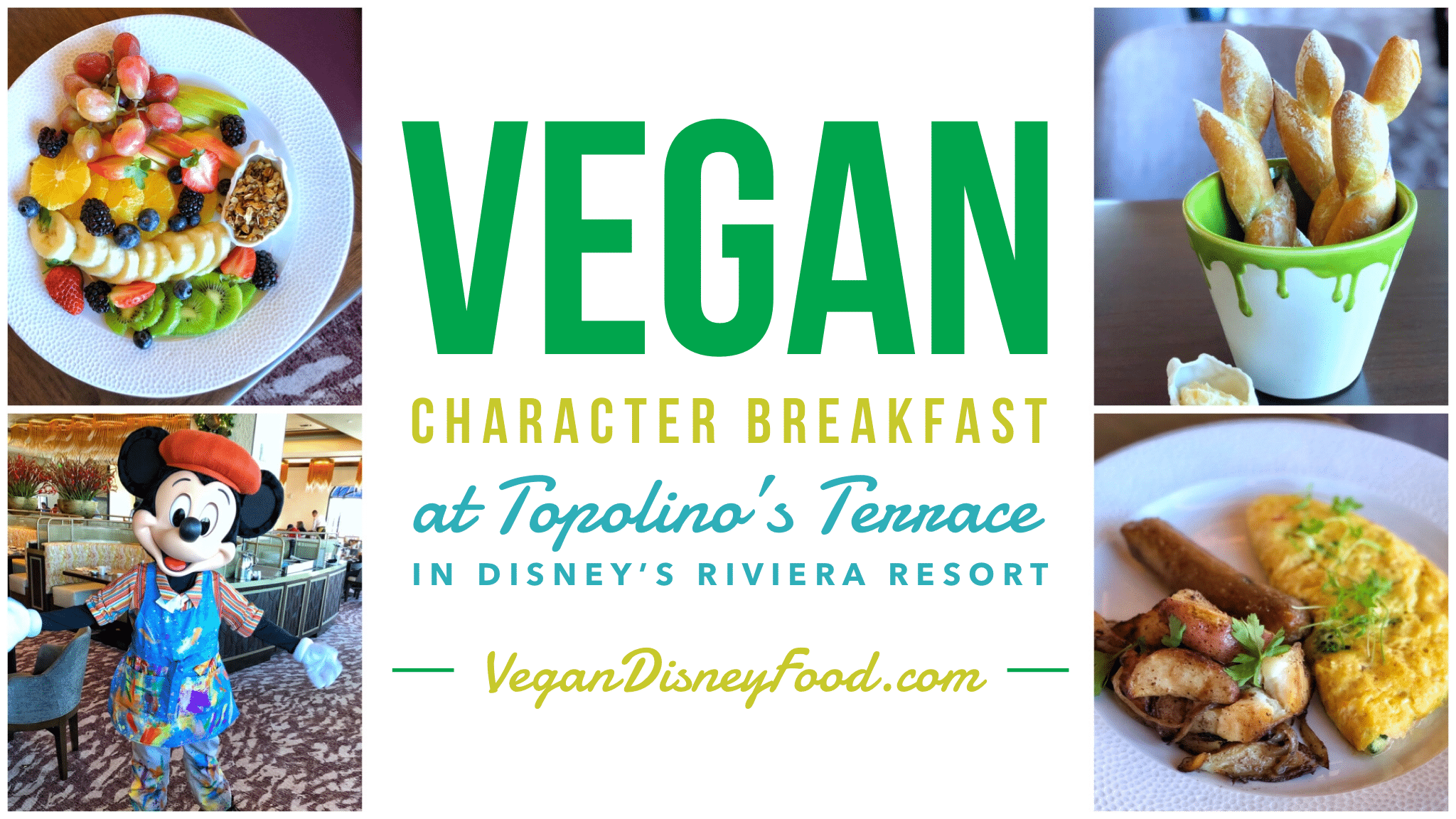 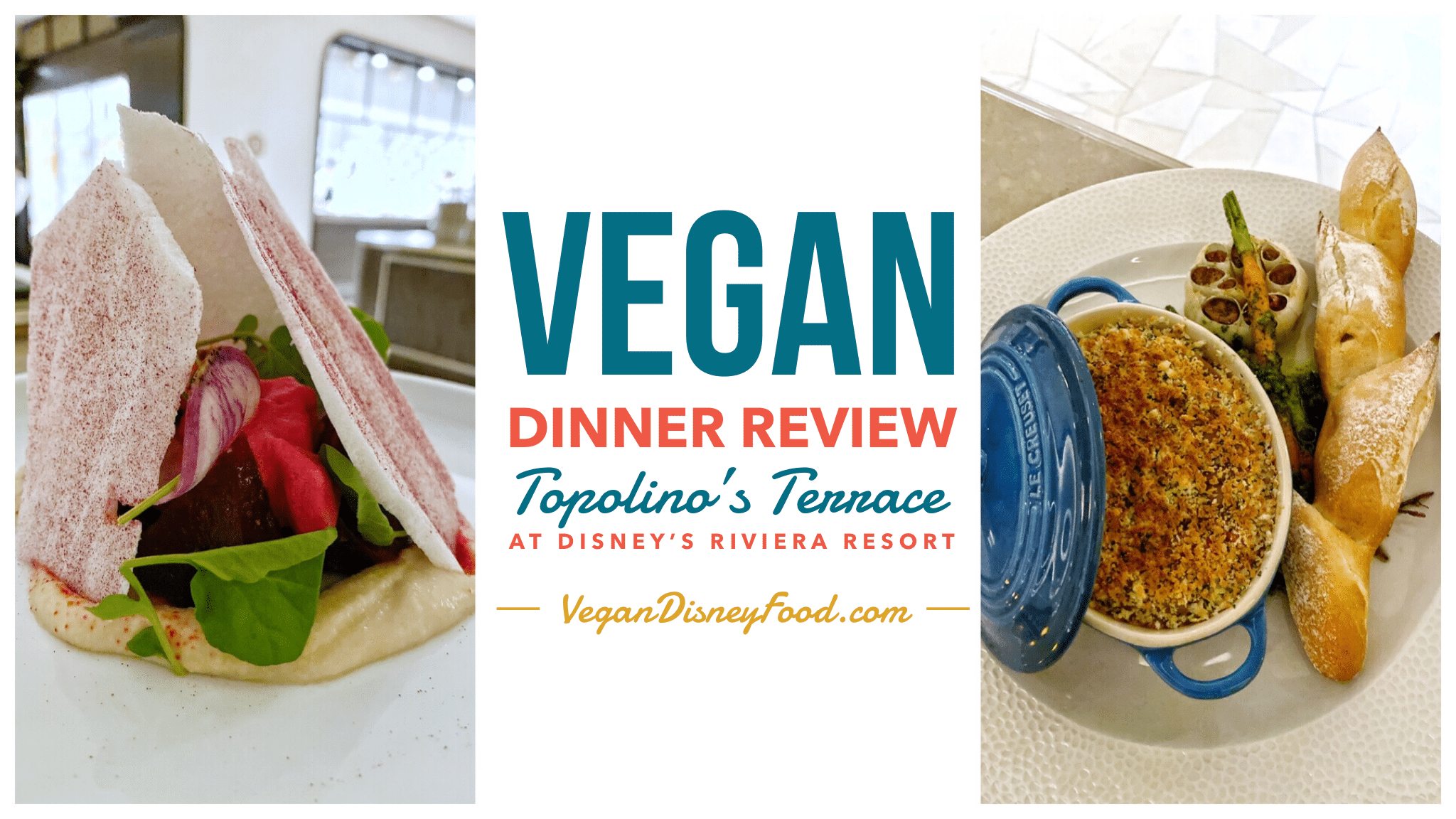 WANT TO REMEMBER THIS OPTION? Save the “ Vegan Lunch at Primo Piatto in Disney’s Riviera Resort at Disney World” pin to your favorite Pinterest board. 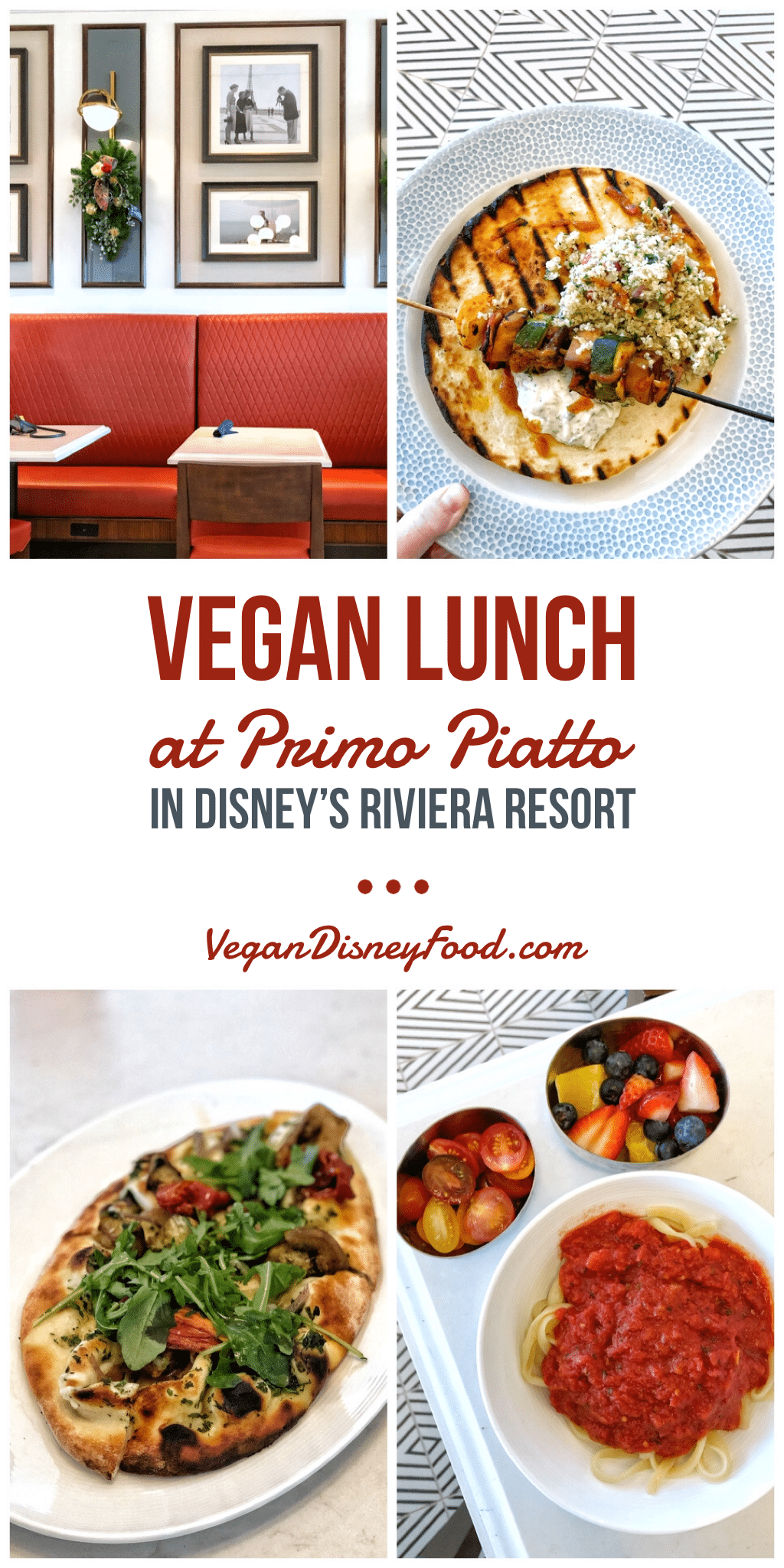