Recently there’ve been some new vegan options added to the menu at the Nine Dragons restaurant in the China pavilion at Epcot.

It’s been a few years since we dined here so we headed out this week to check them out and see what all the hype was about. 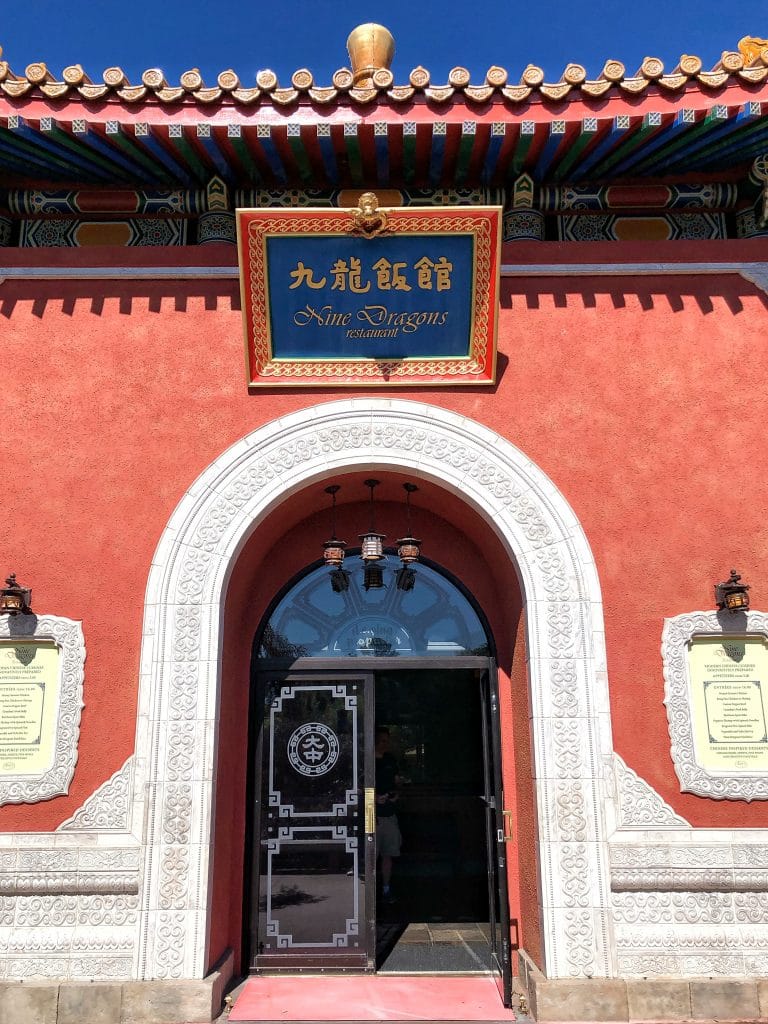 You can find the full service Nine Dragons restaurant next door to The Lotus Blossom Cafe which is China’s quick service restaurant.

The restaurant is serving Cantonese, Mongolian, Szechuan, Hunan and Kiangche-style specialties in a classic yet modern space. 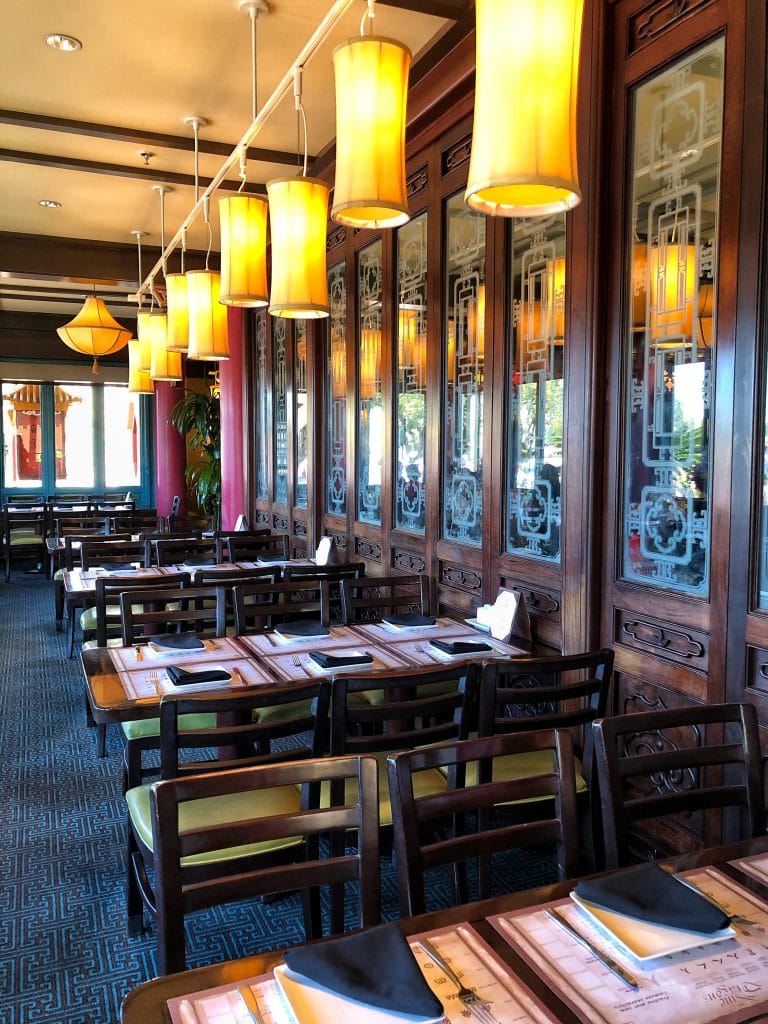 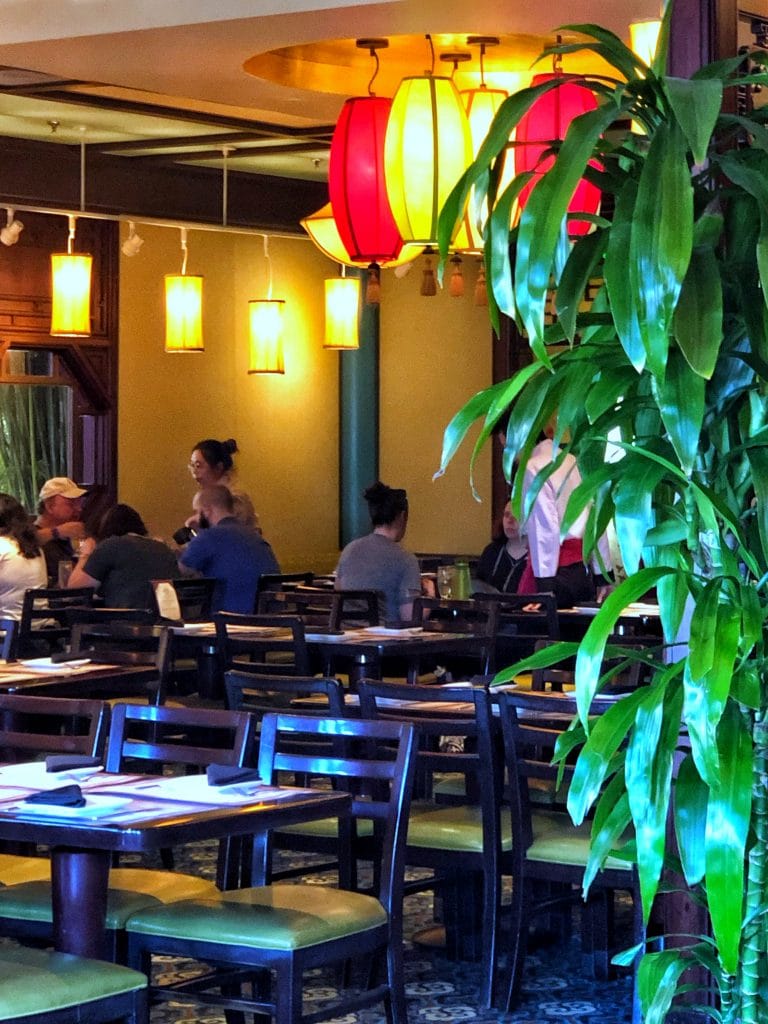 Request a seat by the window and watch people stroll the World Showcase promenade. 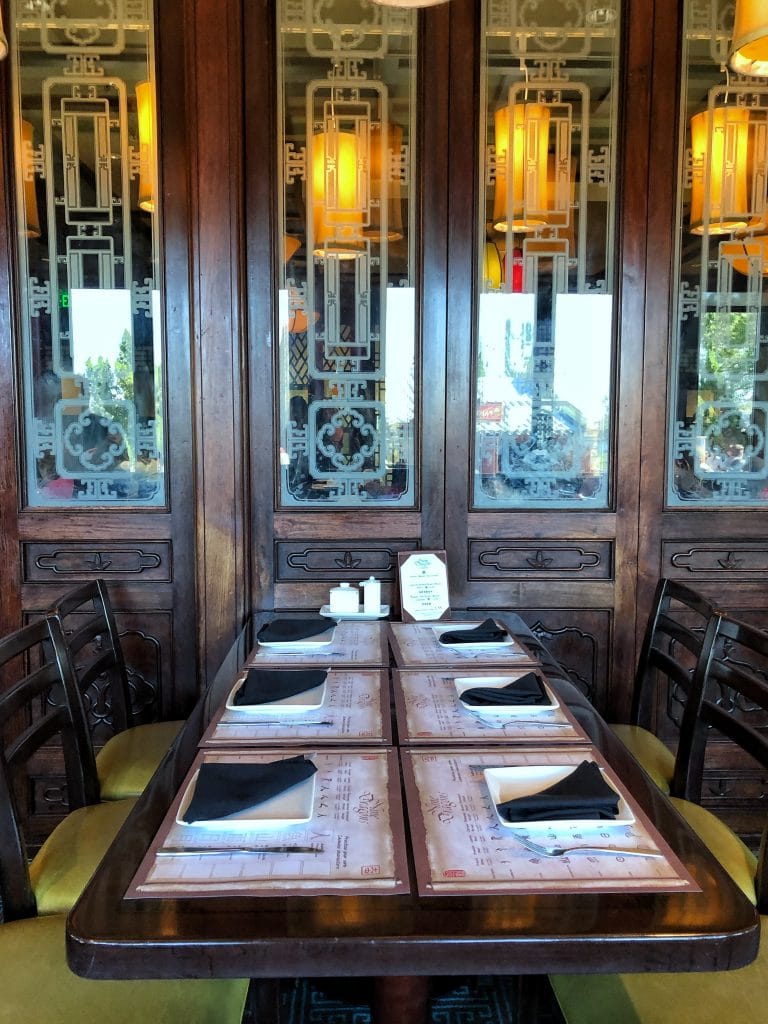 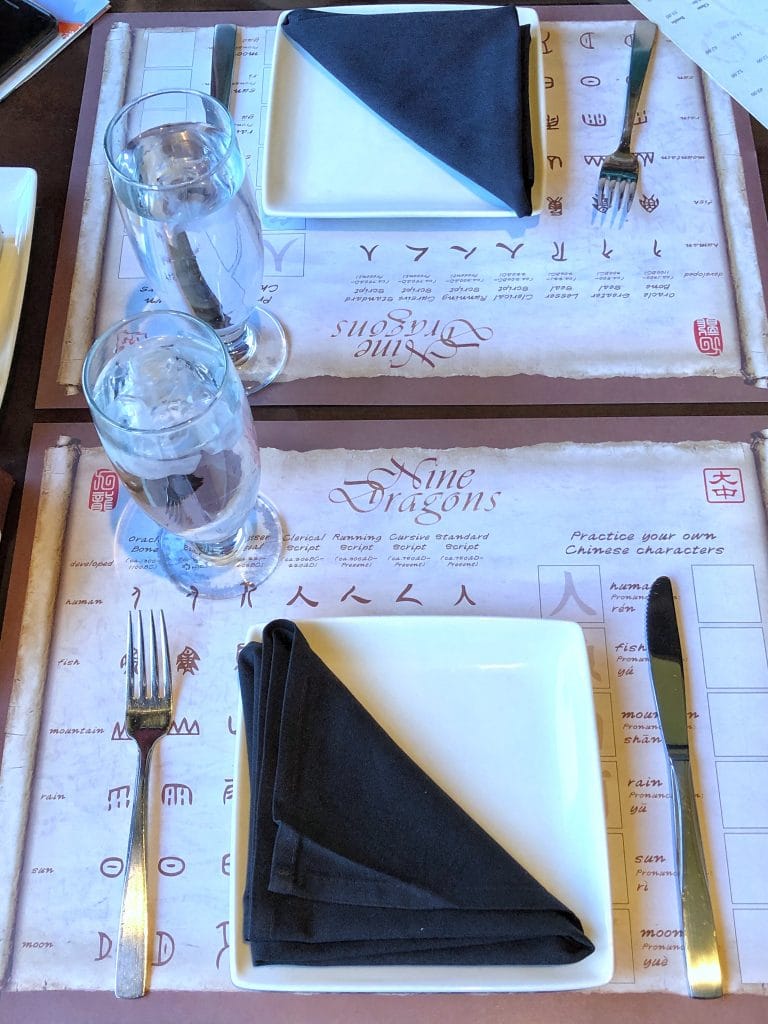 There are two unmarked vegan options printed on the main menu as well as one additional offering the restaurant manager told us about when we inquired about vegan options. 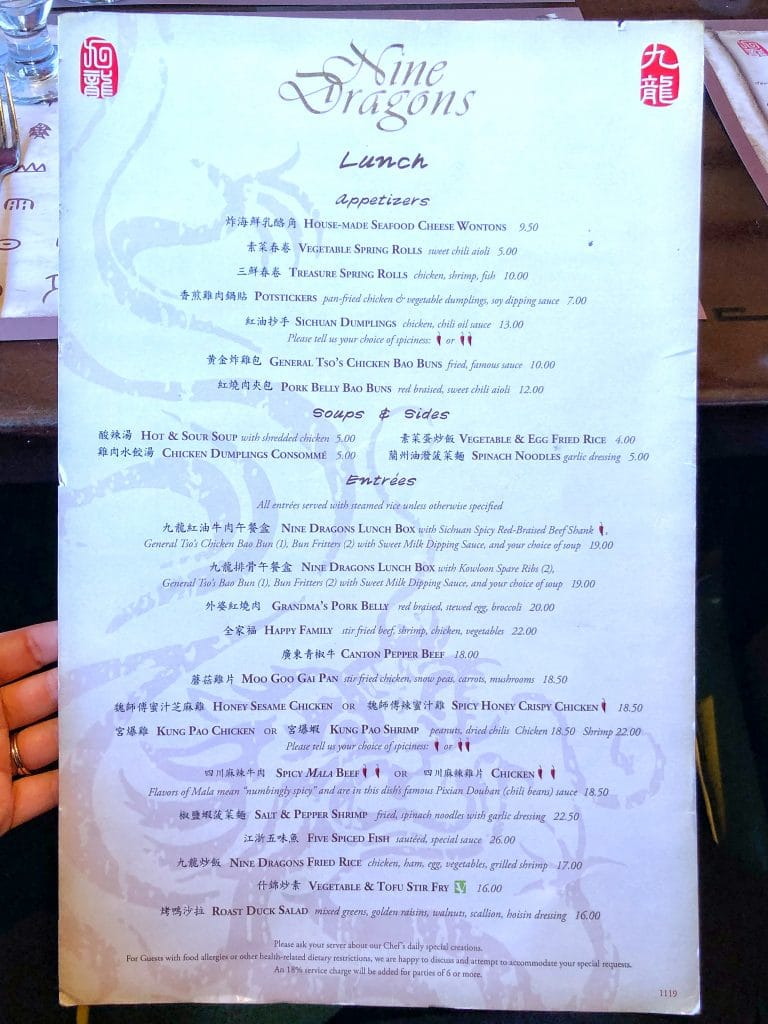 Just this week two brand new dedicated vegan entrees were added to the lineup. These dishes were printed on a placard on our table and each had the official Walt Disney World “plant based” leaf symbol. 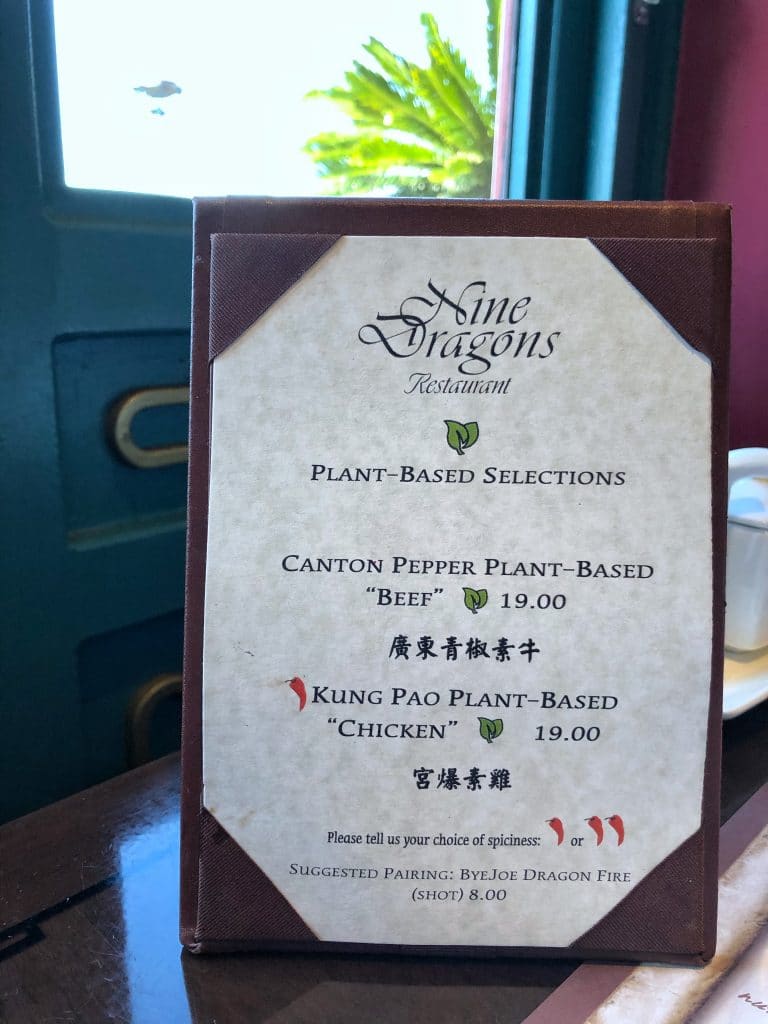 We started our lunch service with the Vegetable Spring Rolls ($5.00) which come two to an order and are served with a sweet chili dipping sauce. 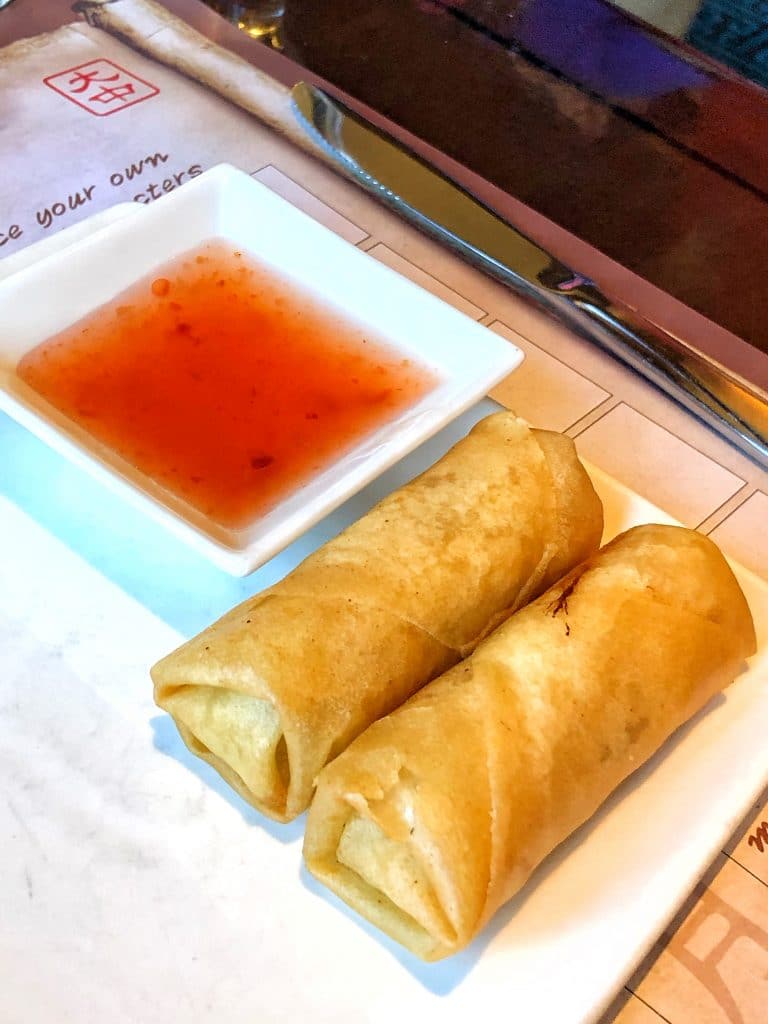 I’m somewhat obsessed with crispy fried spring rolls and probably could have eat two more orders of these!

They do come from a shared fryer. 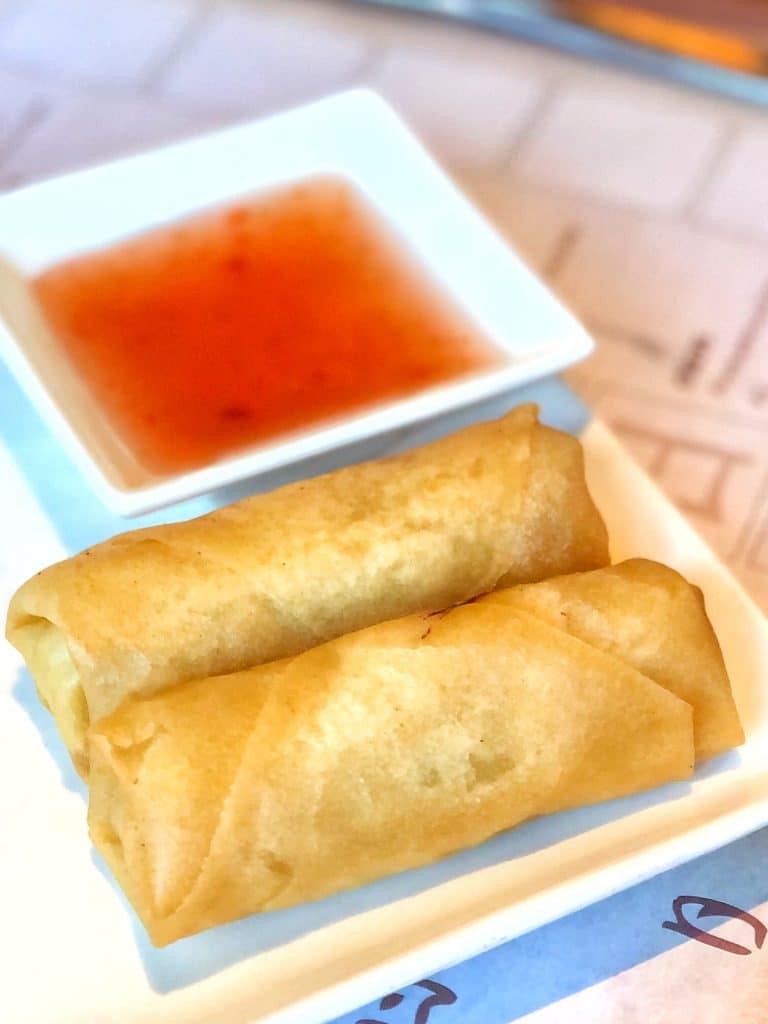 I spoke with the restaurant manager to see if any of the other menu items could be modified.

I asked if the Vegetable and Egg Fried Rice could me modified with the omission of the egg and he said it couldn’t  be as it is prepared in big batches. I also inquired about the Spinach Noodles and unfortunately those contain egg as well.

The manager did mention that I could have a starter Salad ($6.00) with a lemon dressing that was not listed on the menu. 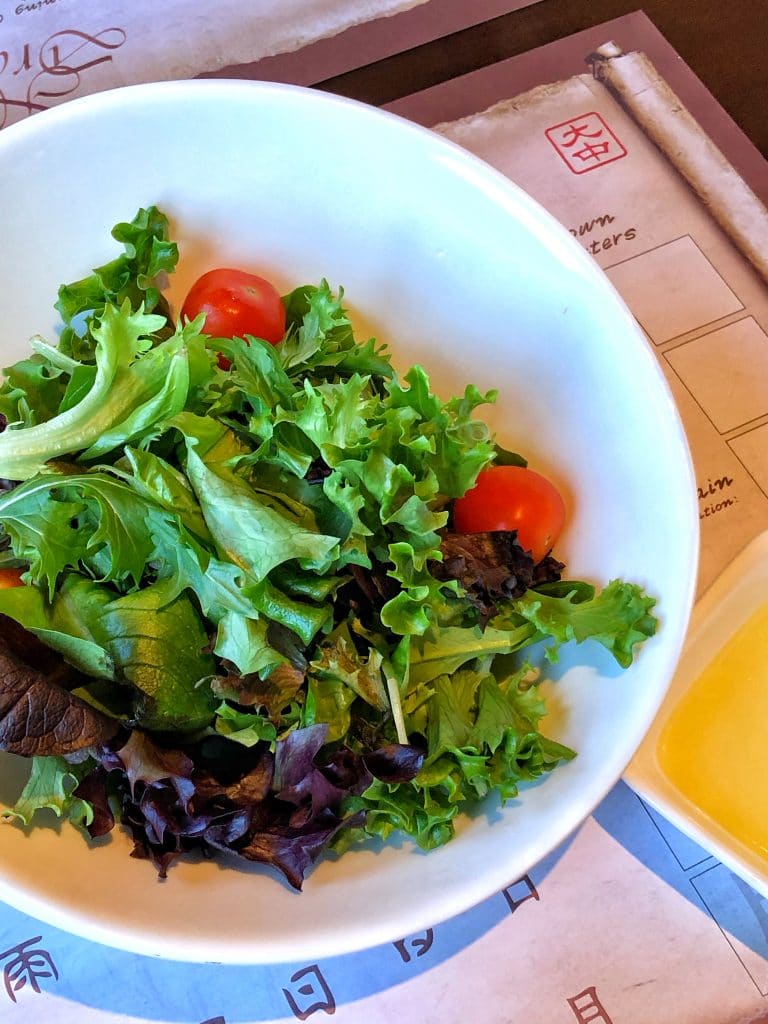 You’re gonna wanna skip this one. It was leafy greens with few grape tomatoes and the dressing was straight up lemon juice with a touch of oil. So bland.

There is an entree listed on the menu that is marked with the green “Vegetarian” V symbol. It just so happens to be vegan as well.

This is the Vegetable and Tofu Stir Fry ($16.00) and it comes with white sticky rice. 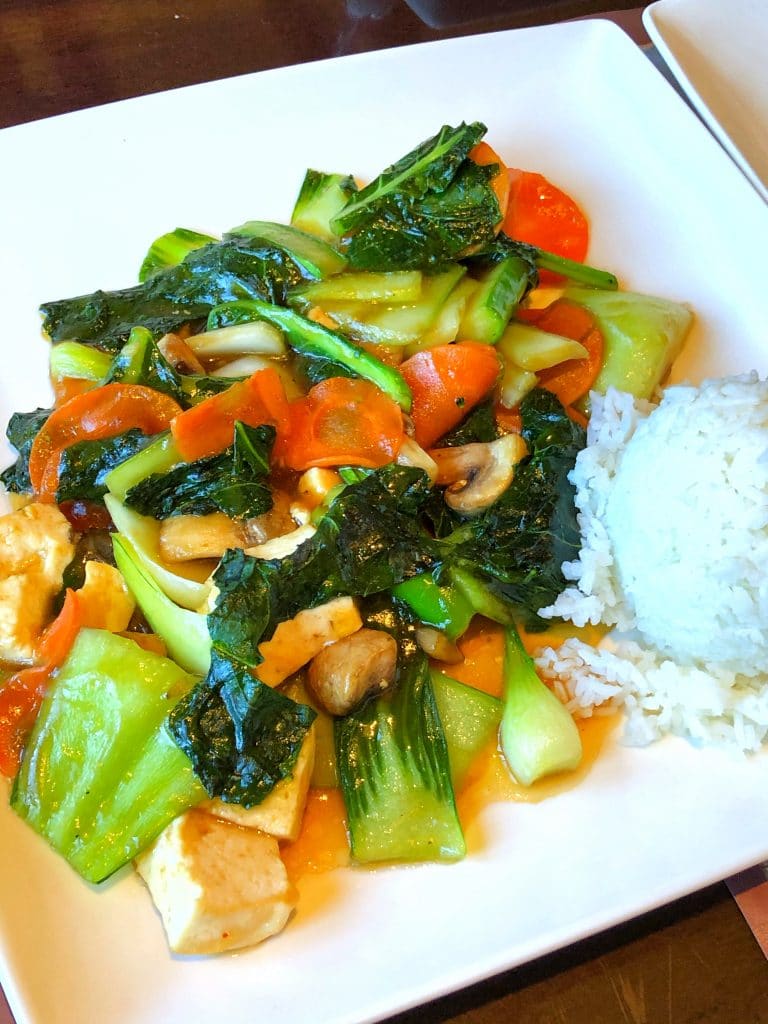 The stir fry is in a mild, almost undetectable sauce, and is loaded with bok choy, scallions, carrots, mushrooms and tofu. 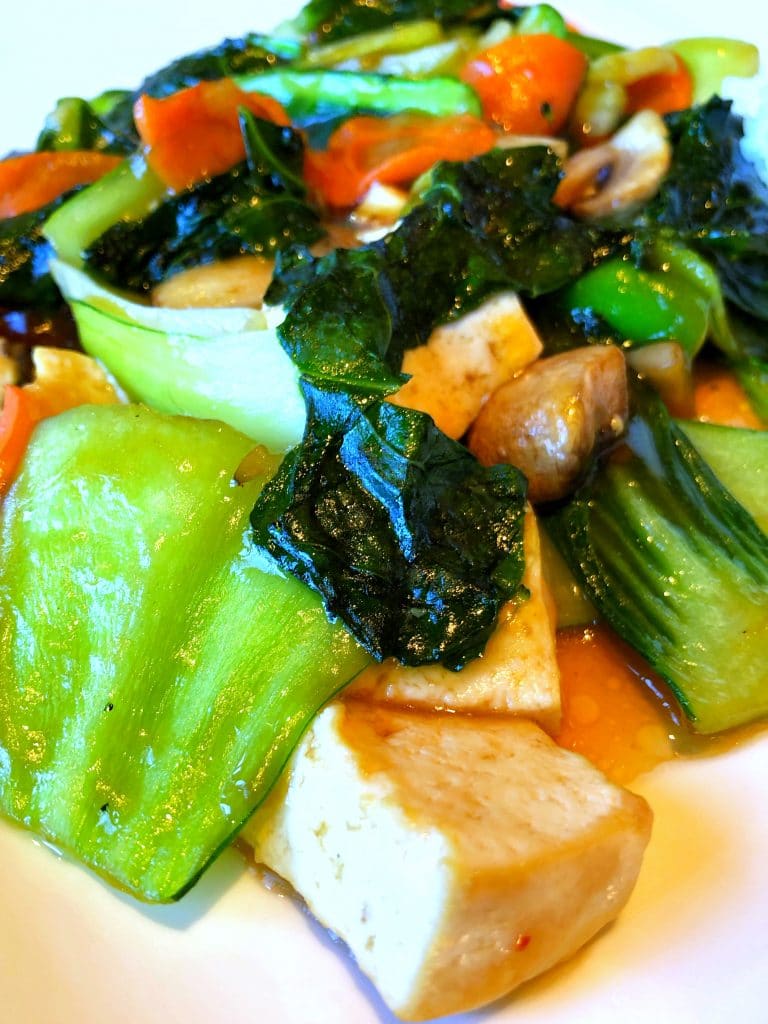 This dish on the blander side. I would definitely skip it and go for one of the two new entrees.

My girlfriend ordered the Kung Pao “Plant Based” Chicken ($19.00) which also came with a side of white rice. 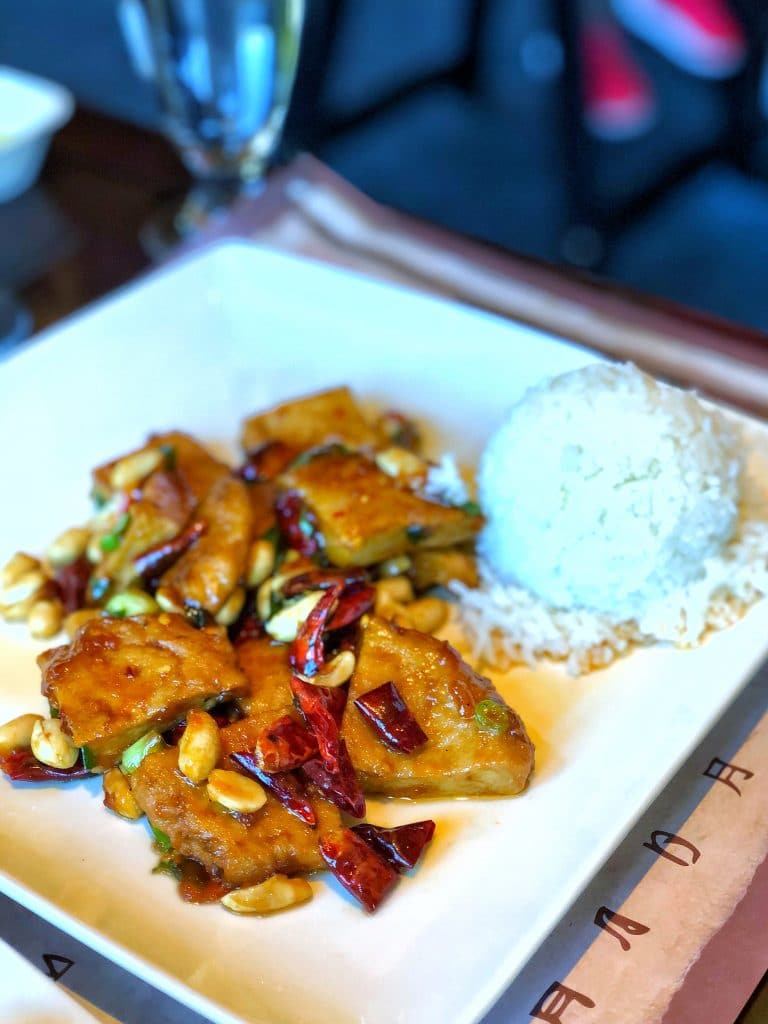 With this dish you can pick your spice level, so the menu says. She wasn’t asked her preference and the dish came out on the milder side, albeit still with a bit of heat. 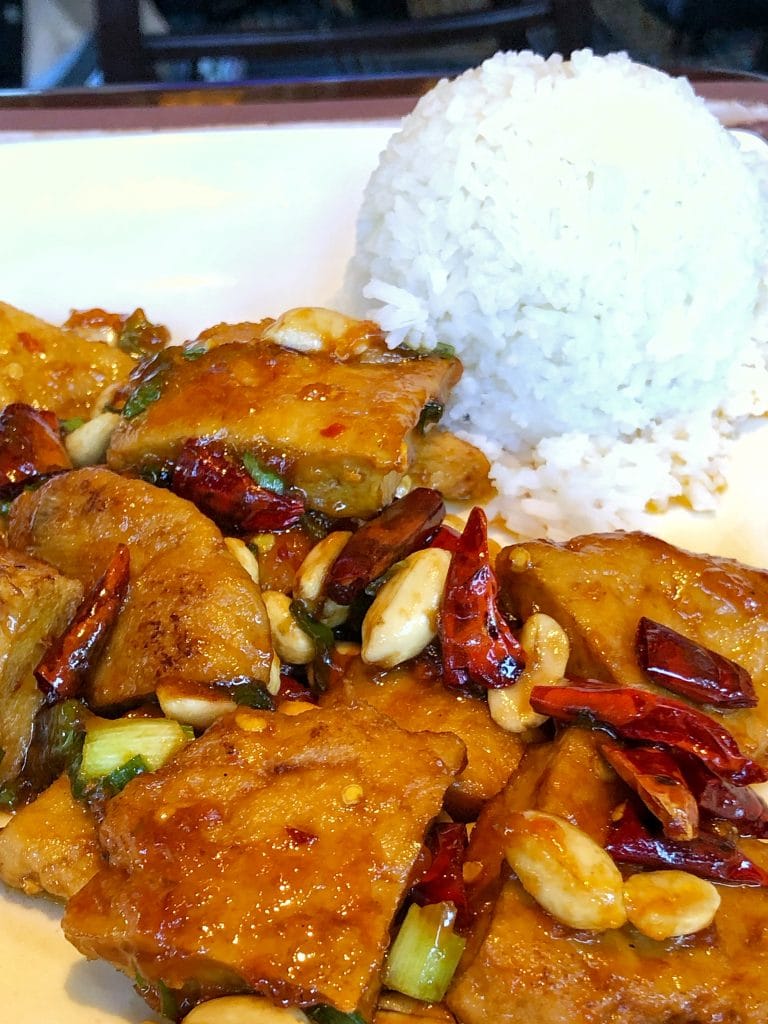 The vegan Chicken was served in a traditional kung pao sauce with chilis, scallions and peanuts.

She said she really enjoyed this offering.

I LOVED my entree, which was the Canton Pepper Plant Based “Beef” ($19). 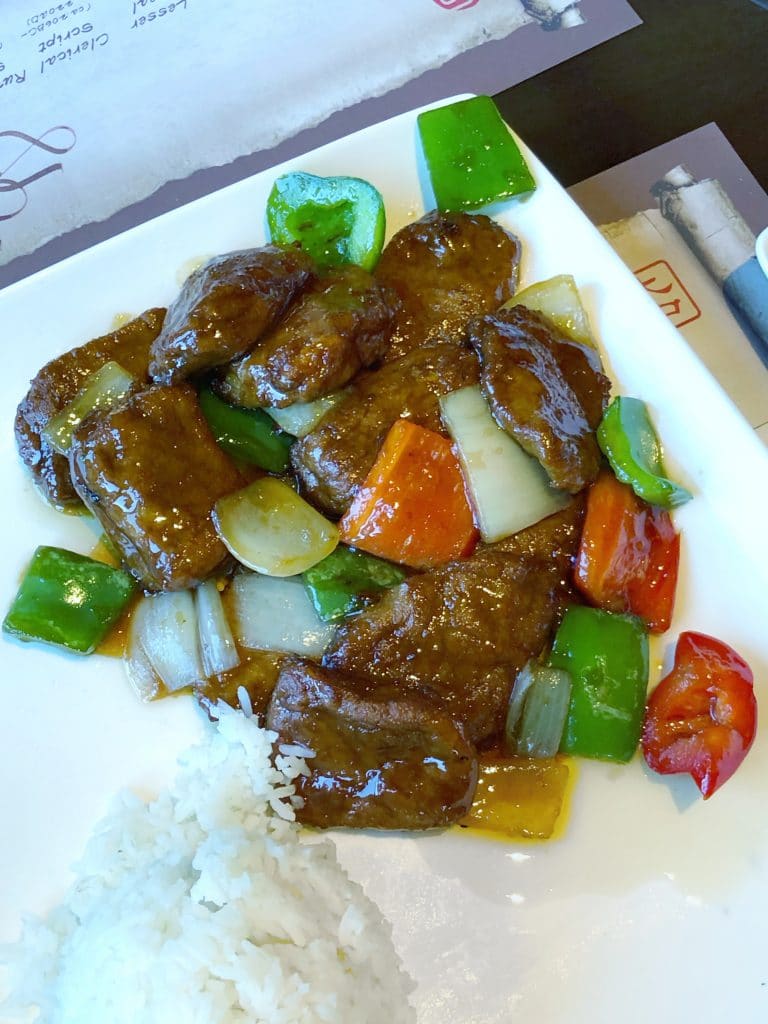 As with all the above mentioned entrees, this one too came with rice. 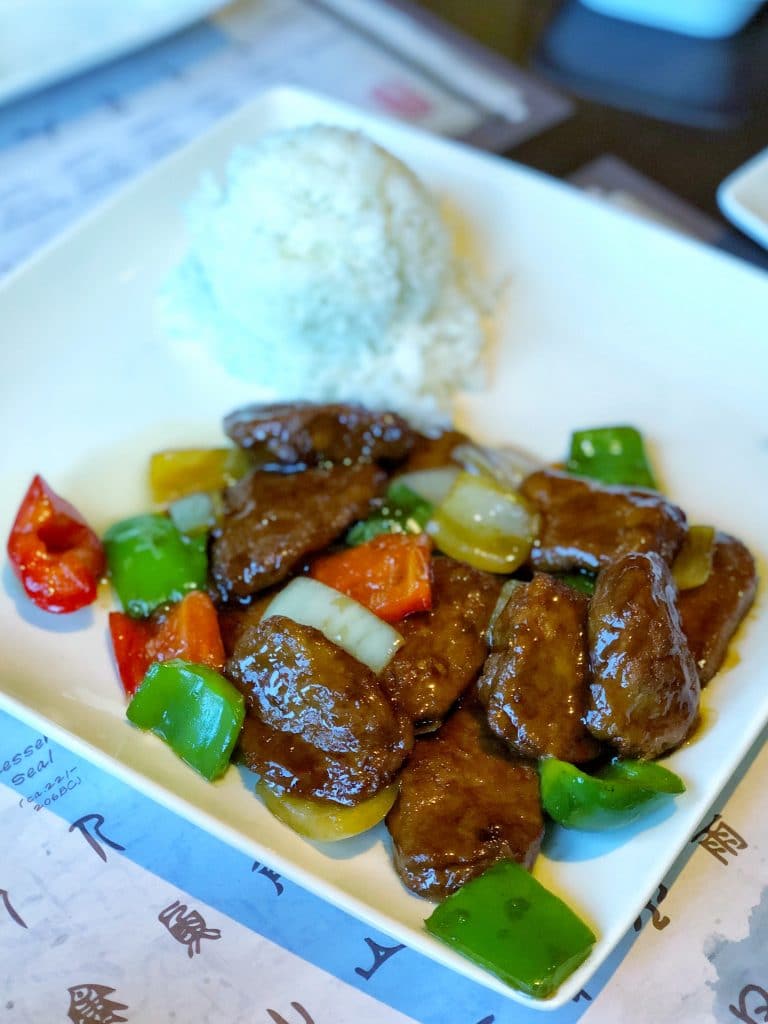 The vegan beef was tossed in a delicious sweet and savory sauce along with onions and red and green bell peppers.

I couldn’t get over the texture of the meat. It was wildly authentic. I asked if they were making it in house, like a seitan and was told that it, along with the vegan chicken is a soy product that they order from a distributor. 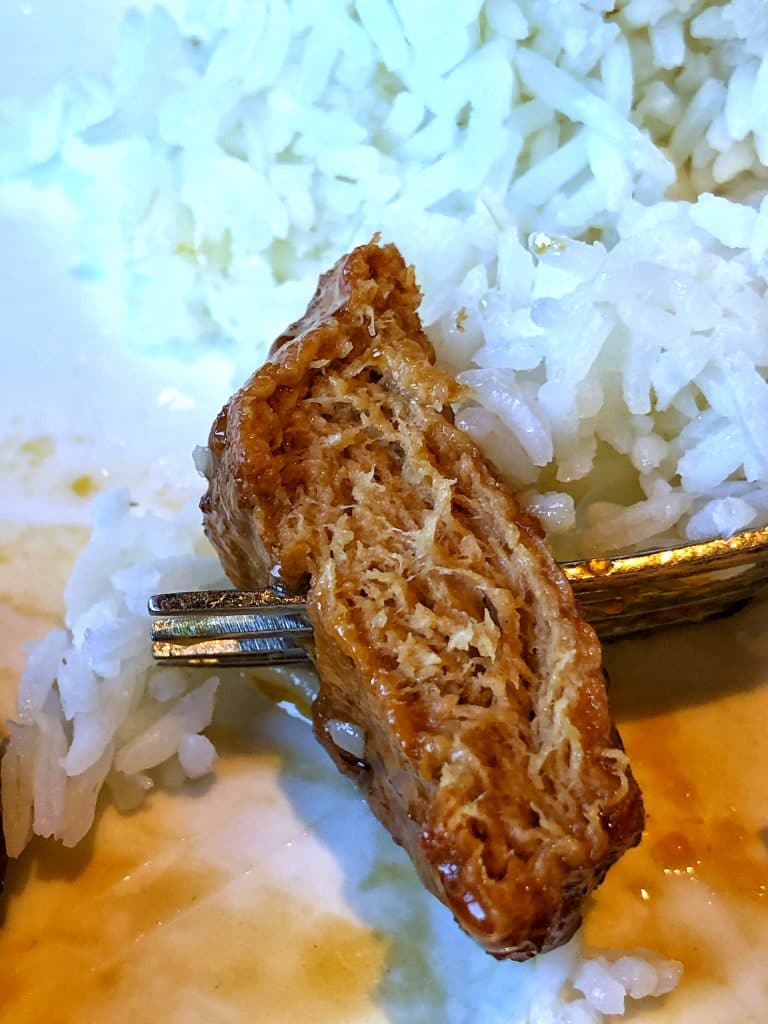 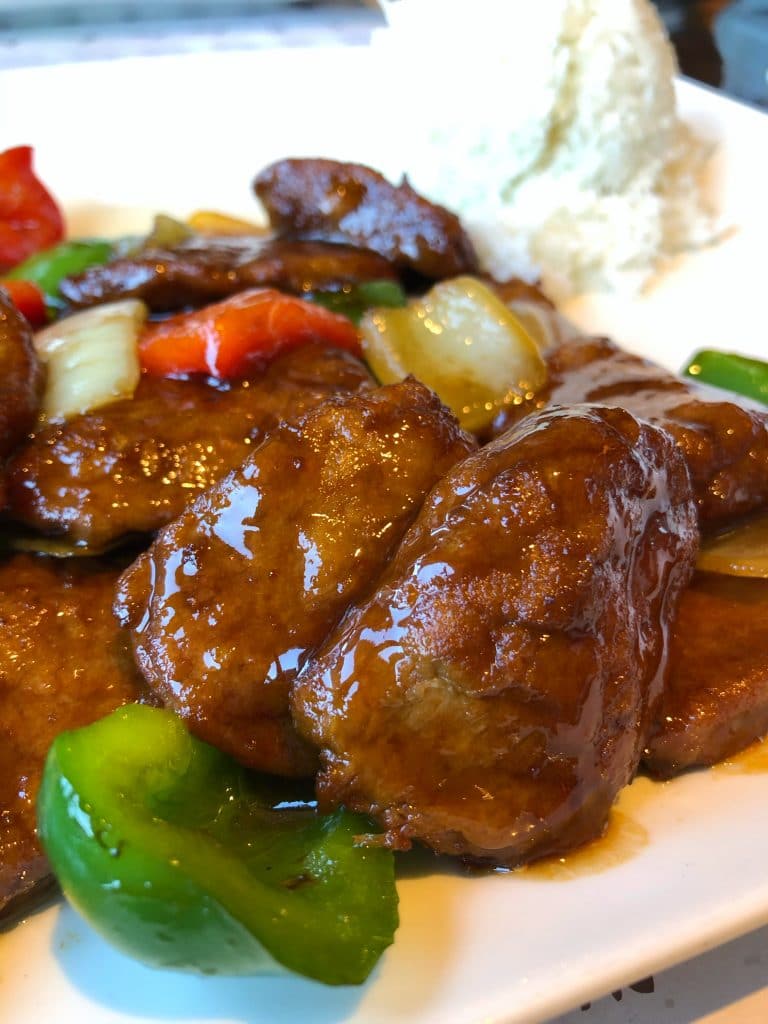 We asked about a vegan dessert option and were told that there wasn’t one.

We know that Nine Dragons hasn’t had the best reputation, however with the addition of these two new plant based entrees and those delicious veggie spring rolls we’d say the restaurant has moved up a few notches on the recommendation list.

For more thoughts on our experience at Nine Dragons check out our YouTube review.

WANT TO REMEMBER THIS OPTION? Save the “Nine Dragons Epcot Vegan Review” pin to your favorite Pinterest board. 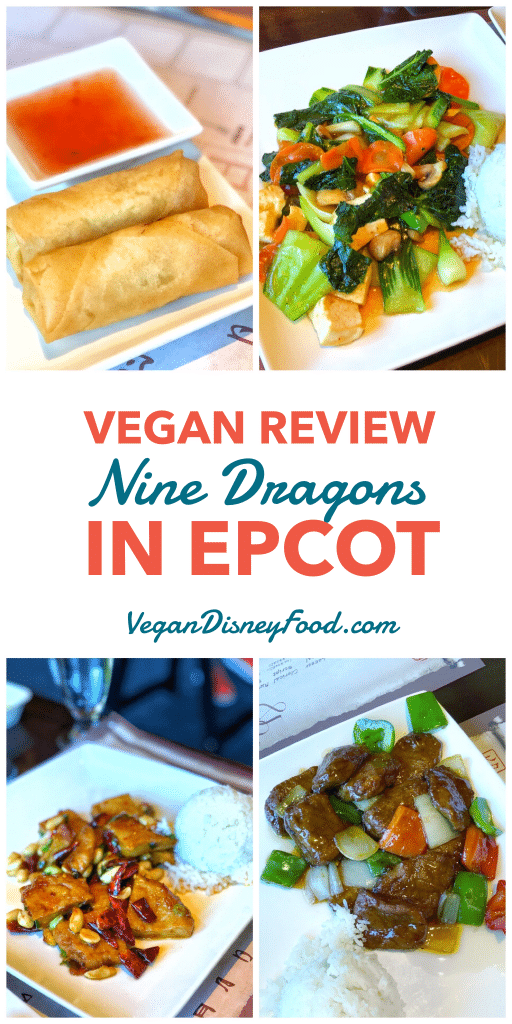 0 replies on “Vegan Review of Nine Dragons Restaurant in the China Pavilion at Epcot”
Love VeganDisneyFood? Support the site: