Before we get to the new 2022 vegan menu at Flying Fish, I have to note that there are very few restaurants I haven’t visited at Walt Disney World, and Flying Fish used to be one of them. Personally, I had never dined at Flying Fish, even before I was vegan or vegetarian, but now I’ve finally crossed it off my list. (I think the only ones left are Victoria and Alberts and Takumi Tei by the way if we’re talking official Disney and not other resorts on property.) As a result, I have nothing to compare Flying Fish to from before the closure, but from what I’ve seen, the main entrée has a slightly different preparation, and the dessert is completely new. 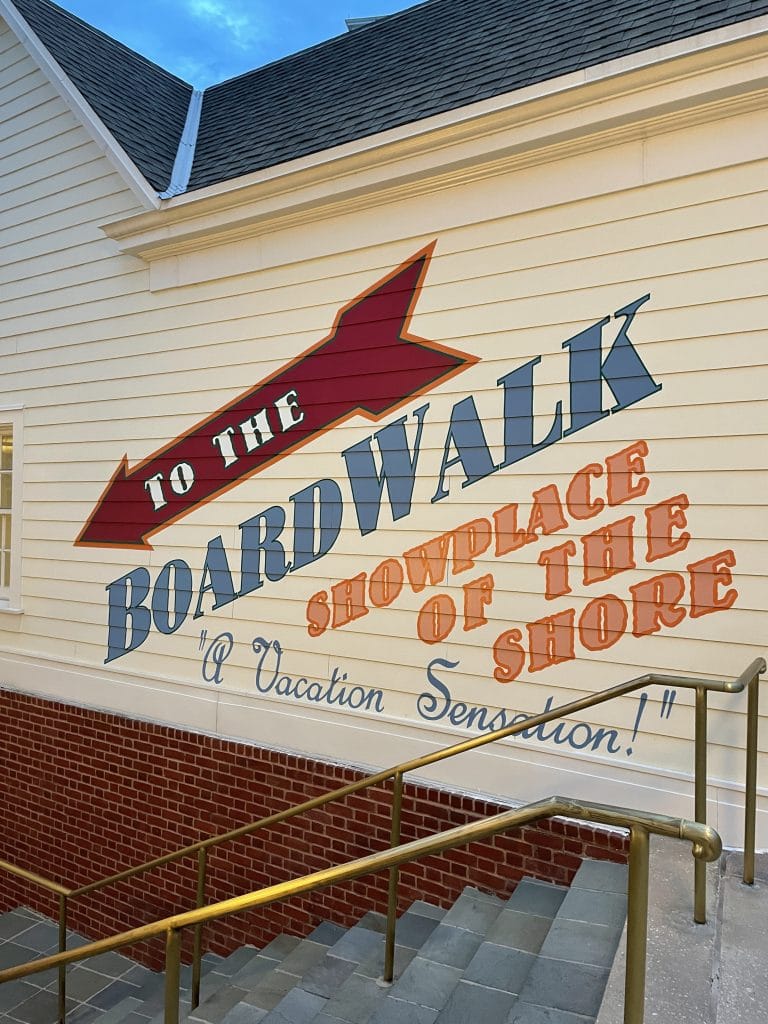 Flying Fish is located right on the Boardwalk at Disney’s Boardwalk Resort, just steps away from EPCOT and the other resorts in the area including Disney’s Yacht and Beach Club, and the Swan and Dolphin Resorts. Originally, the restaurant was called Flying Fish Café, and had a boardwalk amusement park theme similar to the lobby décor of the Boardwalk Resort. However back in 2016, the restaurant closed for an extensive refurbishment and when it reopened, the Abracadabar joined in the Boardwalk lineup where the Boardwalk Sweets candy and ice cream shop once stood. The “café” was gone and it is now just Flying Fish. The new décor still paid homage to Boardwalk amusements, but with tasteful black and white photos and gorgeous glass installation hanging from the ceiling, highlighting actual flying fish in art form. 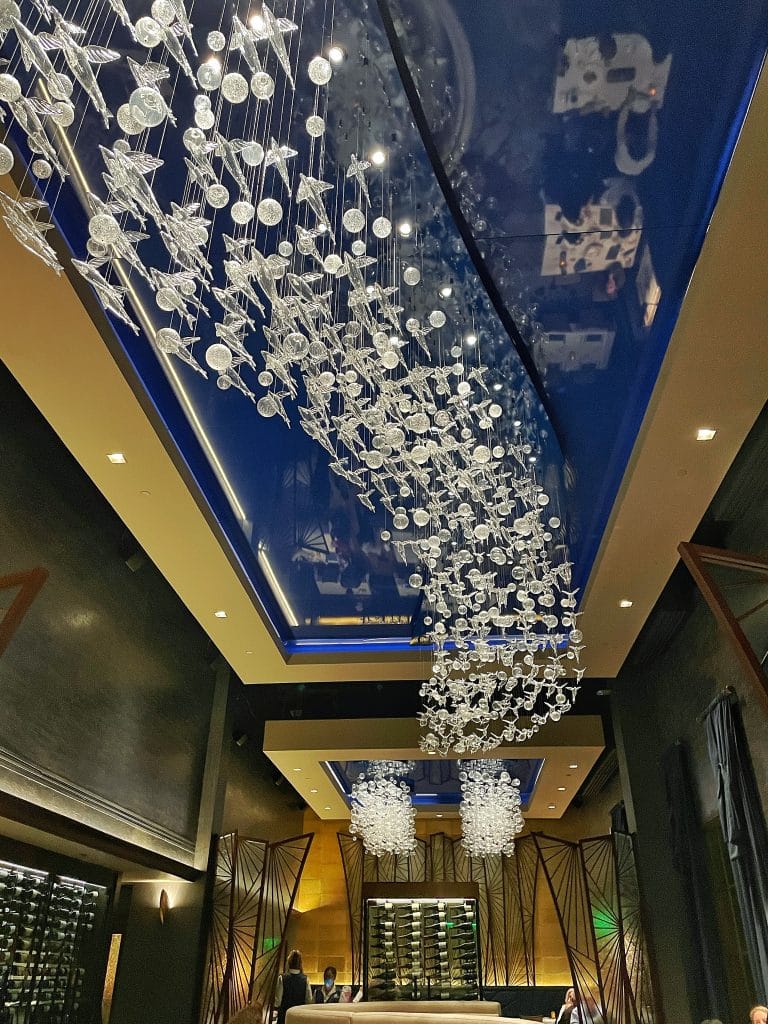 I will say when I first walked in, the restaurant did have an overpowering seafood smell, almost worse than Cape May Café. I really thought that was going to bother me the whole time, but my nose soon acclimated and I didn’t notice it once we were seated. The dining room is quite beautiful and you definitely feel like you are in a Signature Dining location when you settle in. Signature Dining locations usually imply they are the highest level of both dining experience and service at Disney restaurants, and when the Dining Plan was in play, required two dining credits. 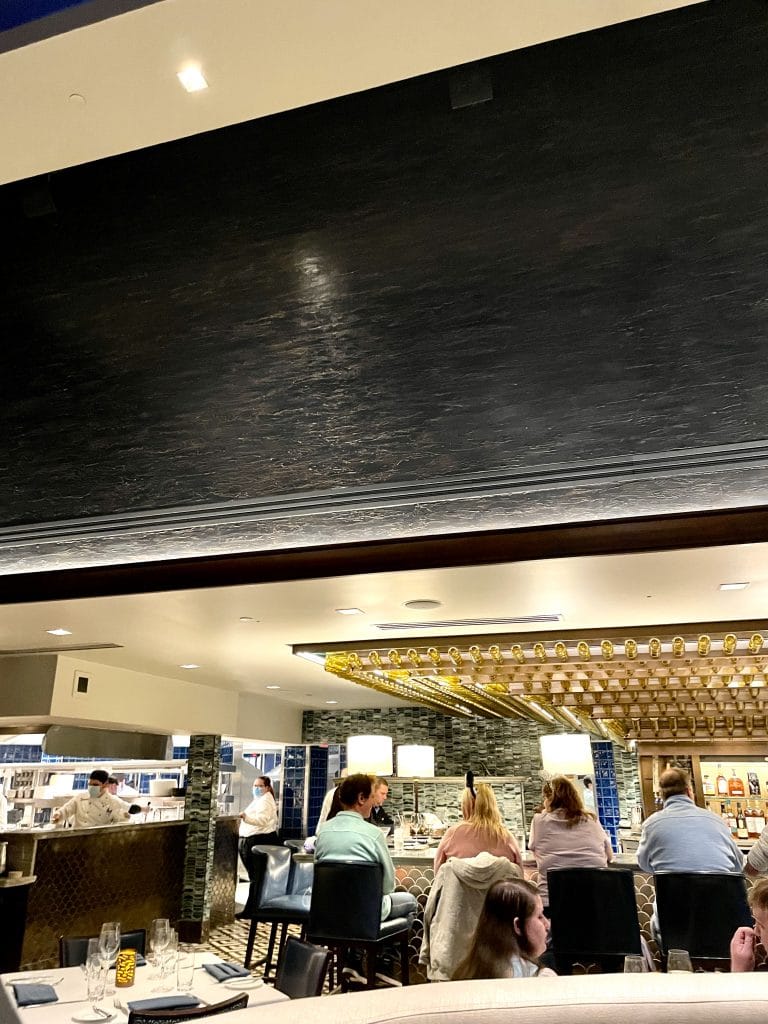 There is a small bar inside Flying Fish, which you can dine at with the full menu, based on walk-up availability. What I first noticed during our visit is we were immediately given physical menus when we were seated. There was not a QR code in sight on the table. I’m not sure if this is going to be the norm again going forward. 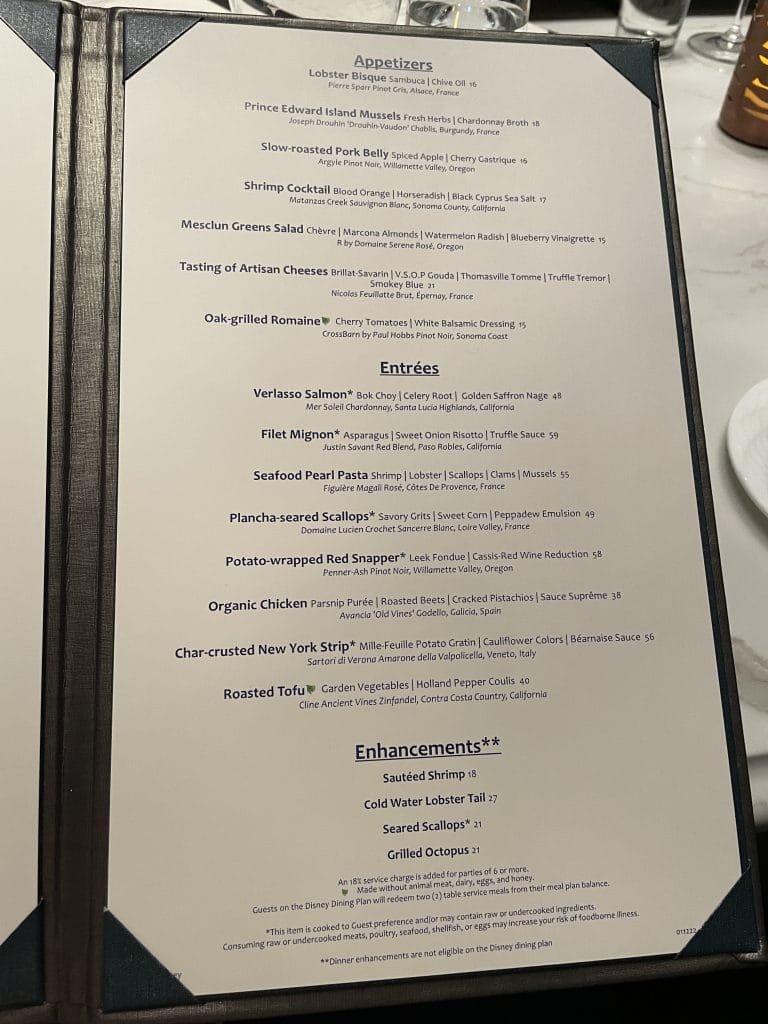 On the menu is a plant-based as-is Grilled Romaine Salad for $15 under the appetizers: 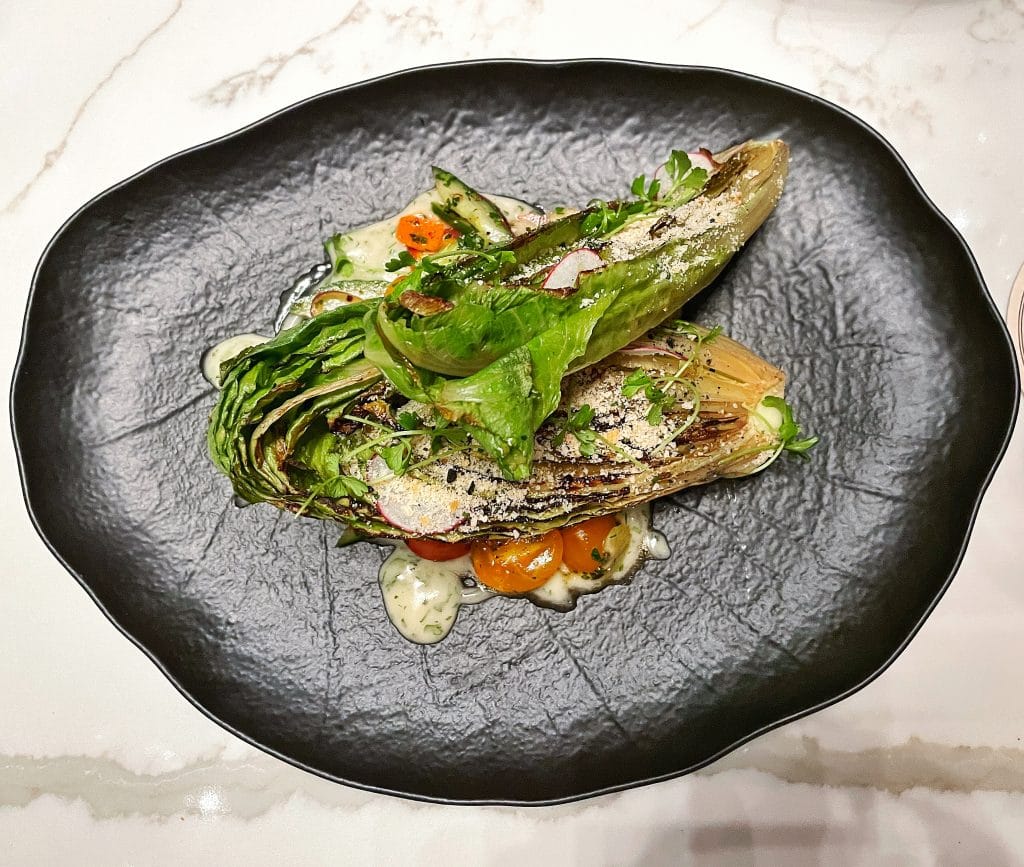 We’ll get to that in a minute, but first there is another modifiable option, the Mesclun Greens salad. This normally comes with goat cheese, so I asked our server if it could be modified, and was told “yes, but that really makes the salad and would change the whole flavor profile” (I answered that I was used to that haha.)

We asked to speak to a chef, because I just wanted to ensure that the blueberry vinaigrette was vegan. Chef Tim came out and assured us that he could definitely make the Mesclun Greens vegan, and that in place of the cheese, would add more almonds. I did not order it because I can’t eat almonds so it would *really* change the flavor, but good to know it’s available.

I asked Chef Tim if there were any other off-menu items that could be made vegan, like a pasta or something. Tim enthusiastically stated that he had a whole kitchen full of vegetables and could do pretty much anything. Of course, that was wonderful to hear and exactly the kind of reaction and level of accommodation we love to see at Disney restaurants from chefs. 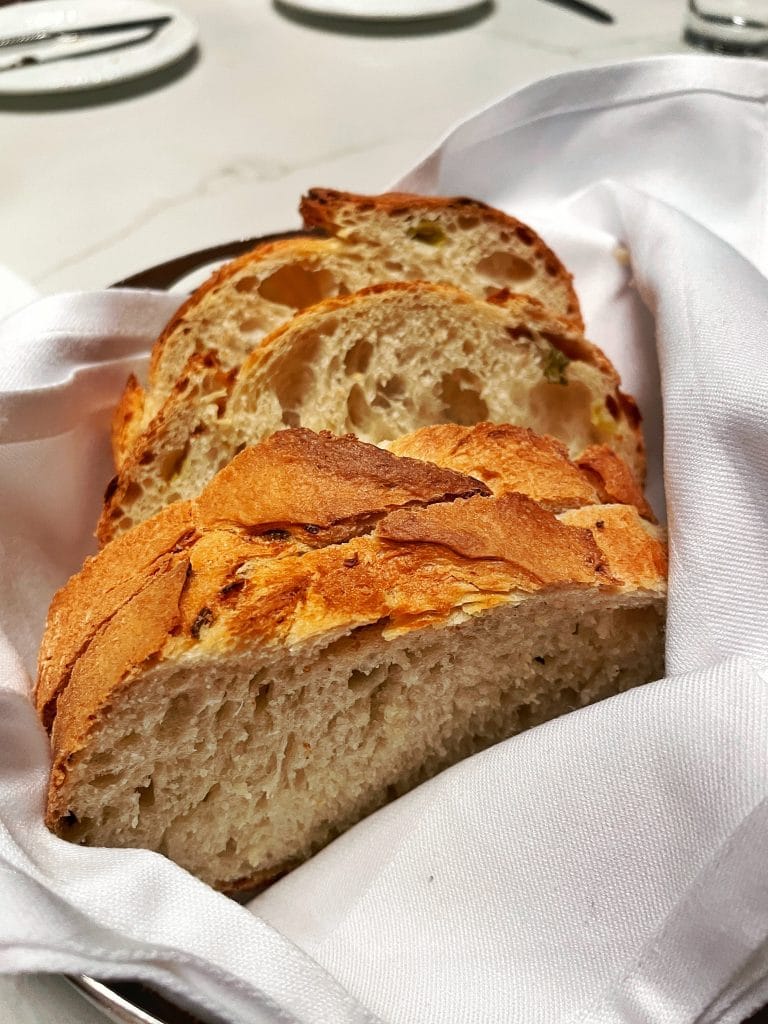 First up, we were served the vegan as-is Potato Chive bread, which is SO good, I’d go back just for this. Granted, I love bread, but this was just such a delight. It is normally served with salted butter with parsley on top, but olive oil and/or aged balsamic is available on request too. However, I tried the balsamic, and while normally I love balsamic anything, I felt the flavor didn’t mesh too well with the chives in the bread. The olive oil alone (or even just the bread by itself) was wonderful though. 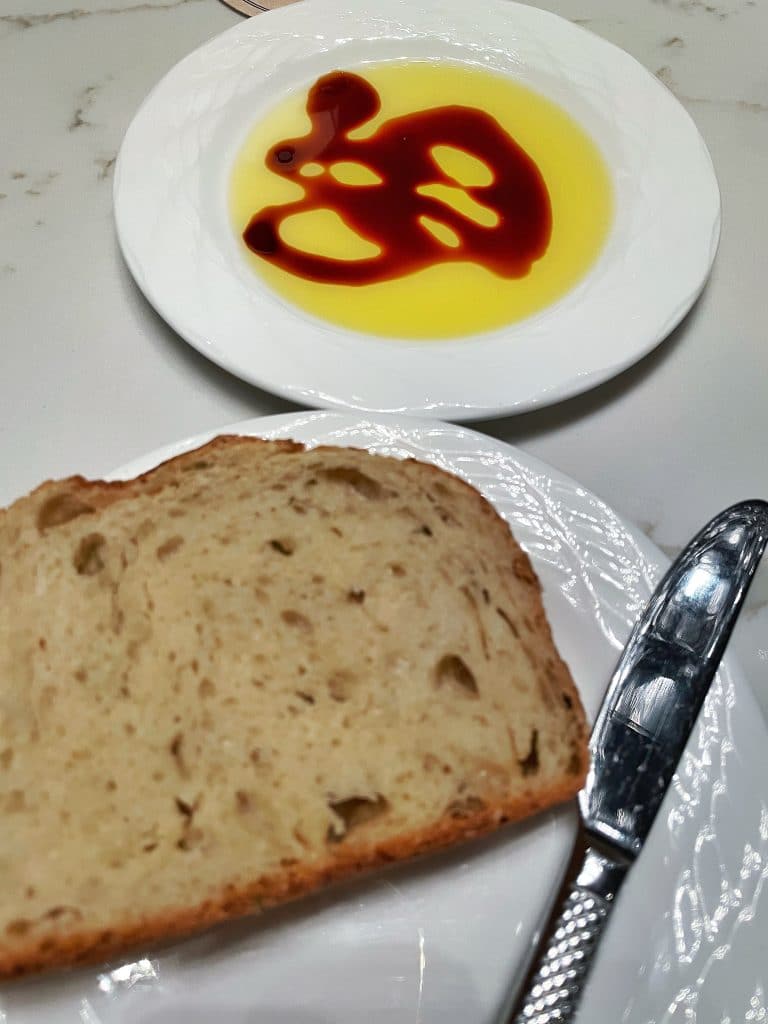 Next, we ordered the Grilled Romaine Salad and were pleasantly surprised at the flavors in this simple dish. I’d of course heard of grilled lettuces, but had never had it myself. I quite enjoyed it! 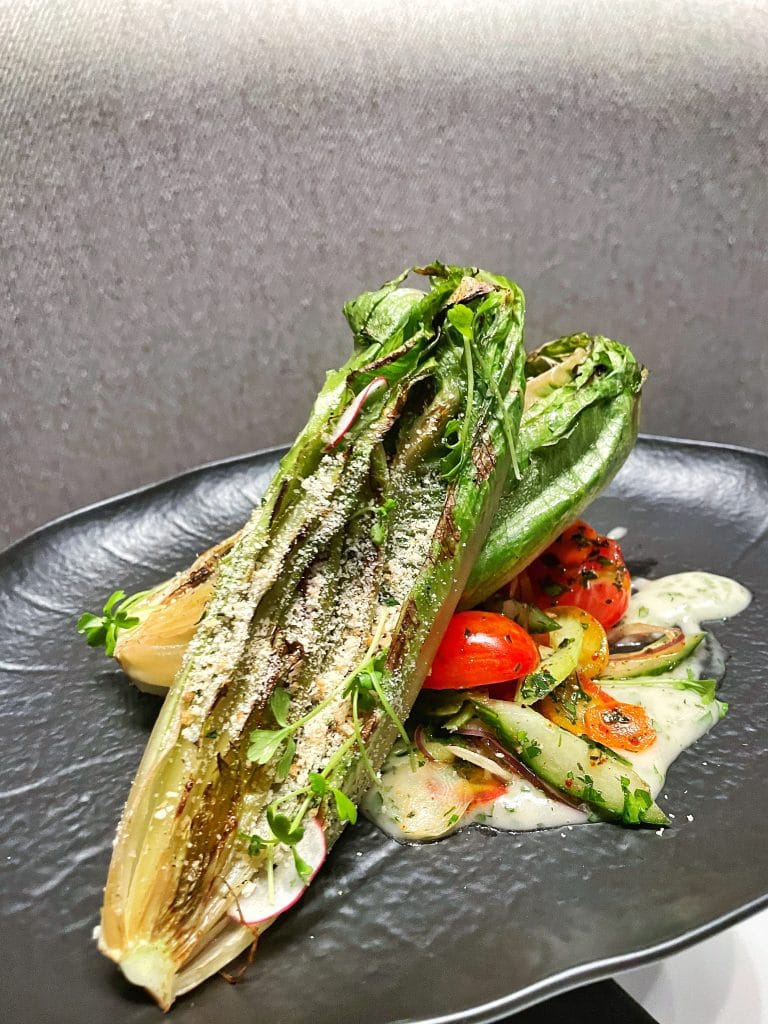 This salad is a wonderful explosion of earthy, garden-fresh flavors. The oak-grilled Romaine provides a smoky taste that is enhanced by the white balsamic vinaigrette and the super fresh vegetables served with the salad. Cucumbers, celery, radishes, and cherry tomatoes are mixed with herbs and served atop the delicious dressing. The lettuce is topped with breadcrumbs and more herbs. When all the flavors are combined, it is truly a treat for the taste buds. I loved this and would without a doubt order it again. An elevated salad that takes simple flavors and makes them worth ordering and not an afterthought. $15 is a lot for a salad, but in my opinion, it lived up to its cost.

I also ordered the suggested paring with the Tofu, the Cline Ancient Vines Zinfandel. My daughter ordered Marsuret Superiore Prosecco. Both were confirmed vegan. 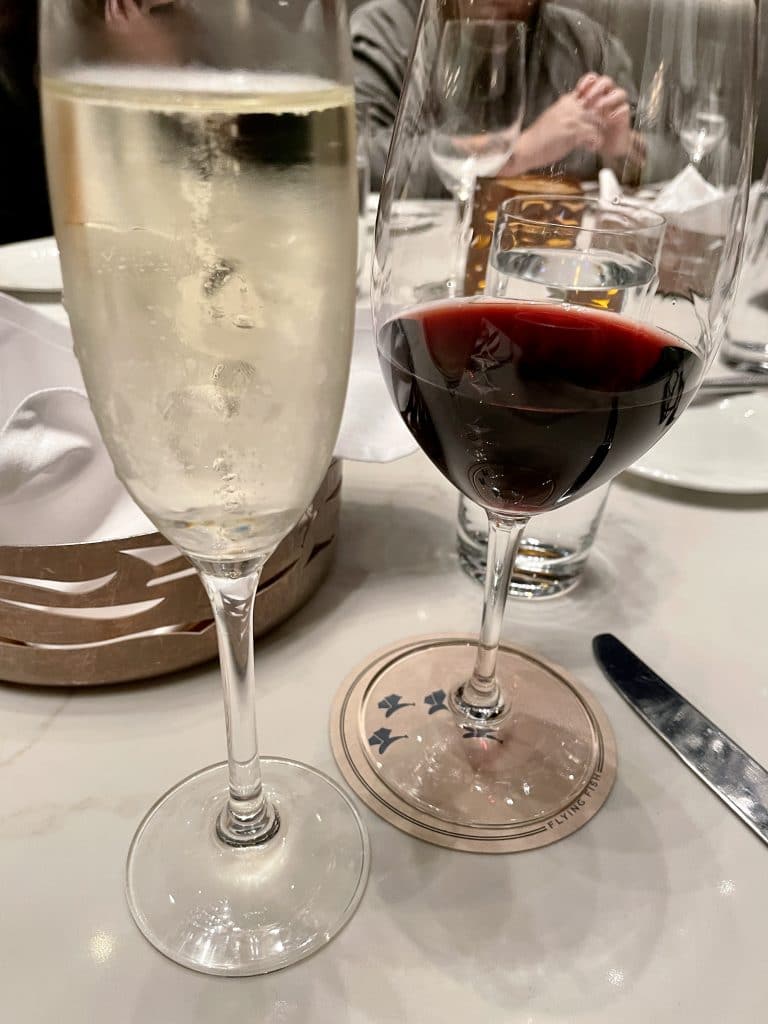 My daughter also ordered the off-menu pasta and we said to just surprise us with vegetables. She was served a very unique type of pasta that I had never personally had before, but I believe comes with a seafood pasta on the menu. The little pearls looked like Israeli Couscous, but was more pasta-like with a thicker texture vs. the softer couscous. Apparently this is Acini de Pepe or literally “peppercorn” pasta (because of its size, no peppercorns are involved). 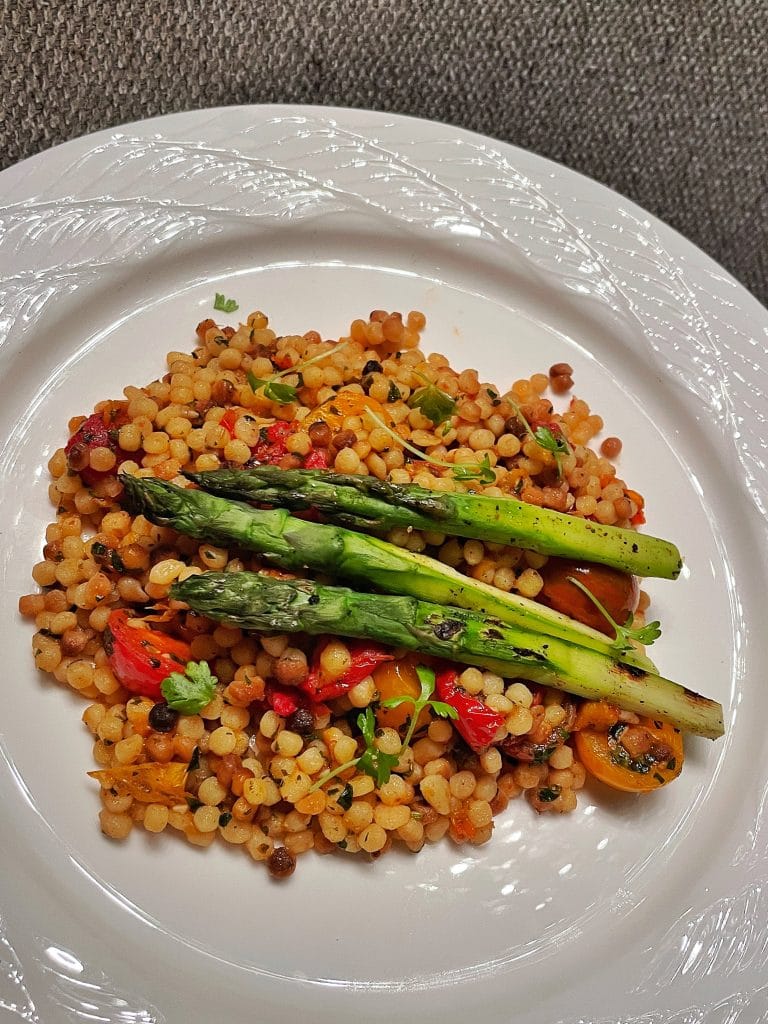 This pasta seemed to be pan-seared with roasted vegetables like cherry tomatoes, peppers, and asparagus. If you had a preference for vegetables, I’m sure you could make a request for your favorites. 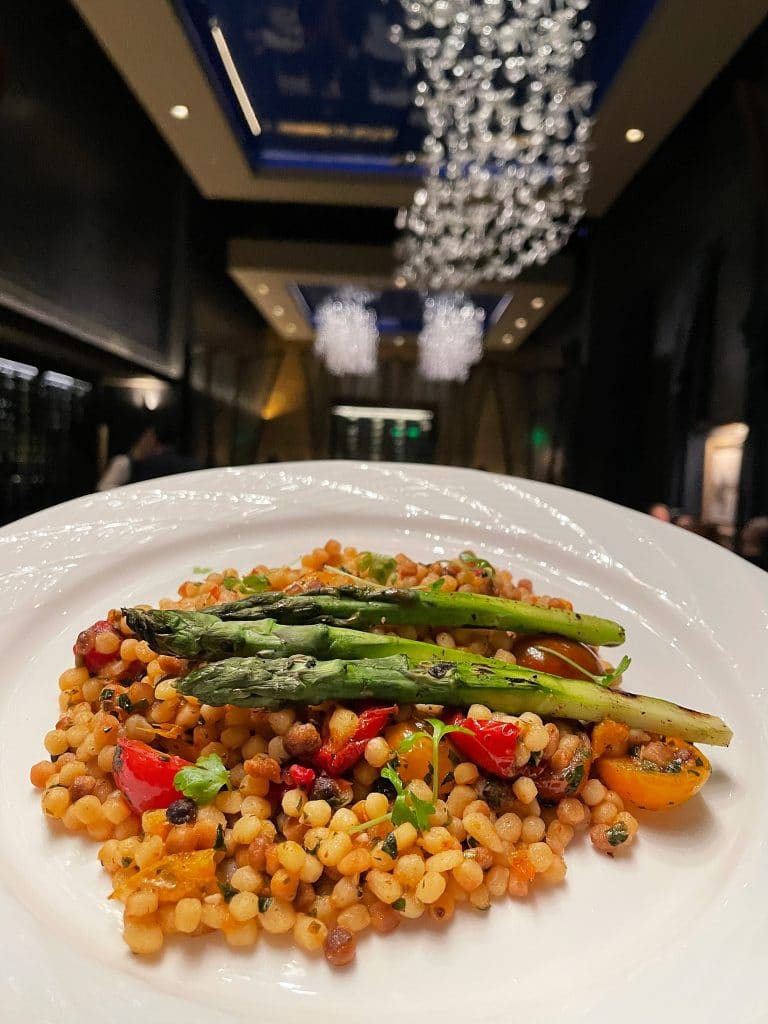 The pasta was well-seasoned so overall, this was a very fun dish and a nice off-menu option for anyone that didn’t want tofu. We were charged $30 for this and it was rung up as “Vegetarian Grains” which was an old menu item before the restaurant closed, so we aren’t sure if that price or name will be updated in the future.

Now to the on-menu plant-based option – the Roasted Tofu for $40. Now, I will say right up front that I think this is overpriced. $40 for tofu and vegetables is a little over the top, but again, you are in a Disney Signature Dining location, and prices will correspond. It is a little disappointing that it’s more expensive than the chicken item for $38. 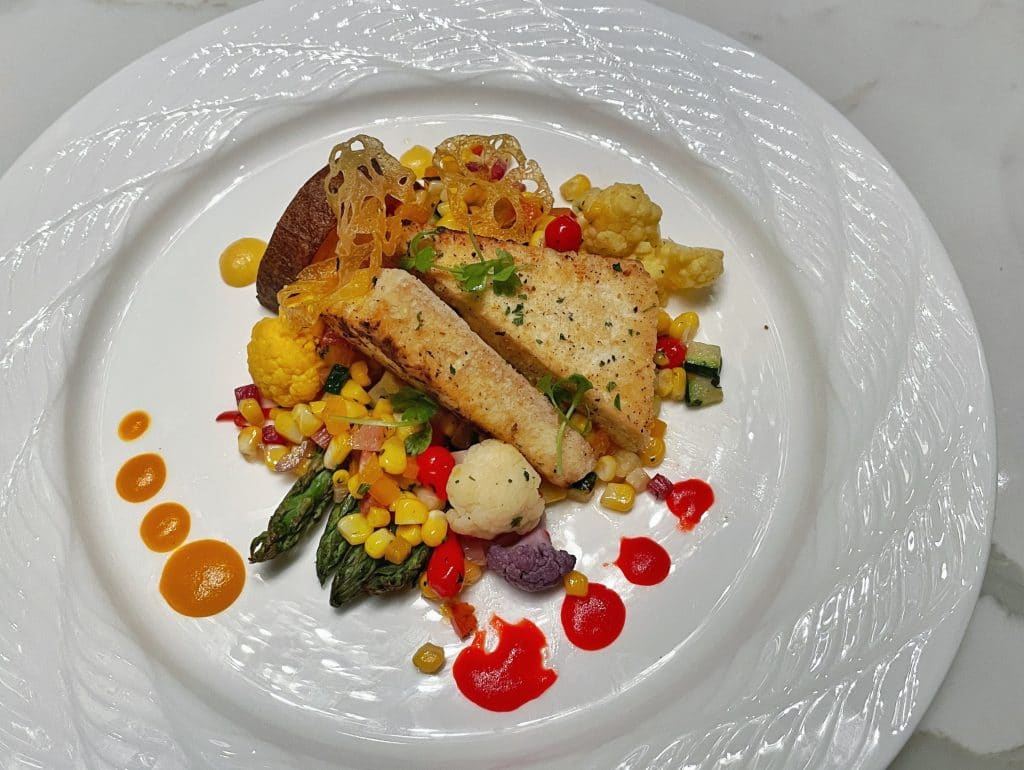 The dish itself, however, did not disappoint. I love a good seasoned and seared tofu, and that’s exactly what this was. I know it says roasted in the menu, but this tasted almost flash-fried. It was perfectly seasoned, and I just loved it. The rest of the vegetables in the dish (a corn succotash-style mix, white and purple cauliflower, asparagus,  and cherry tomatoes and a half-round slice of potato) were very simple and lacking any stand-out flavor or seasoning. However, when combined with the fun sauces (Holland pepper coulis), fried lotus root (which was very sweet), and Sweety Drops peppers, I really enjoyed it. 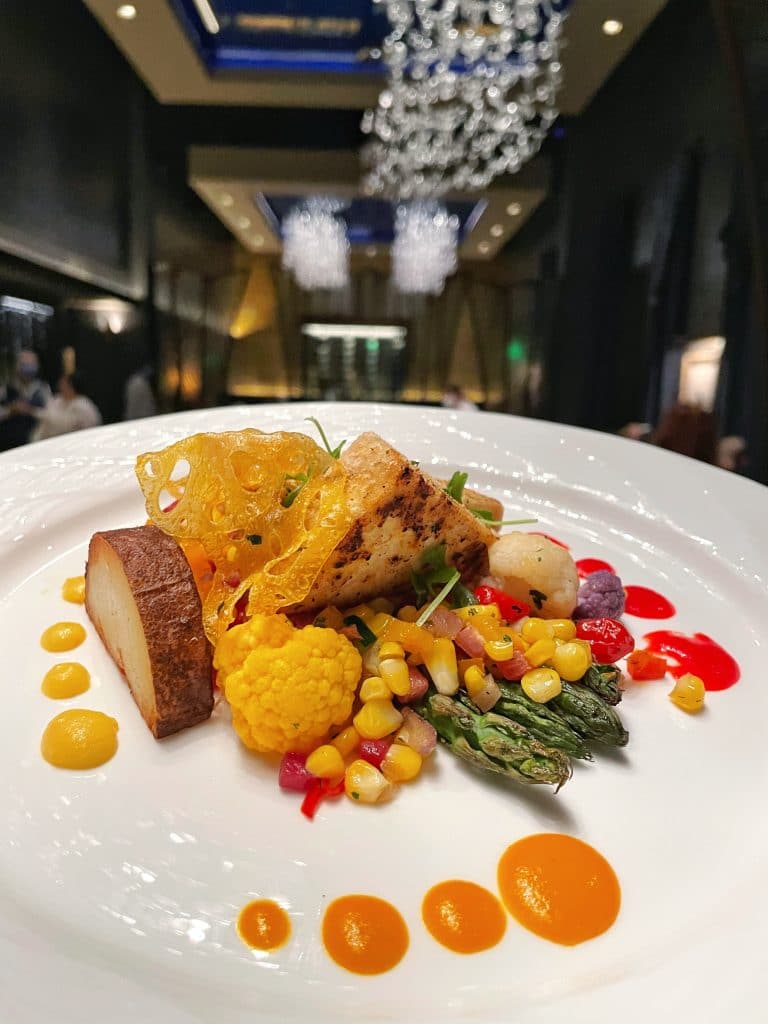 Sweety Drops are miniature teardrop-shaped red peppers which are sweet and packed with flavor. Also known as Inca Red Drops, these peppers come from the mountains of Peru and are one of my predecessor Amanda Tinney’s favorites, so of course, I thought of her as I enjoyed them. 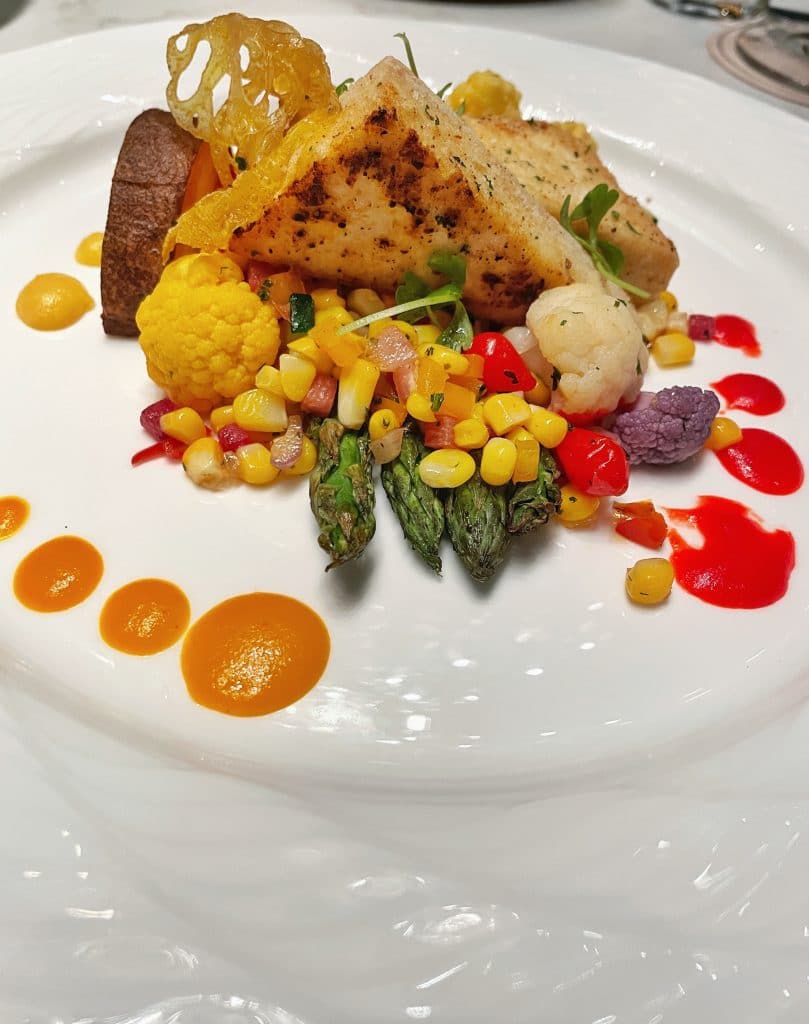 I noticed from other dishes ordered at our table that corn and tomatoes and all the vegetables we received were used often, making the full menu have a very from-the-garden feel to it. Overall, I personally love a good tofu option, so I was happy with this dish.

Lastly, we have a brand new vegan as-is dessert – the plant-based Key Lime Cake for $11. 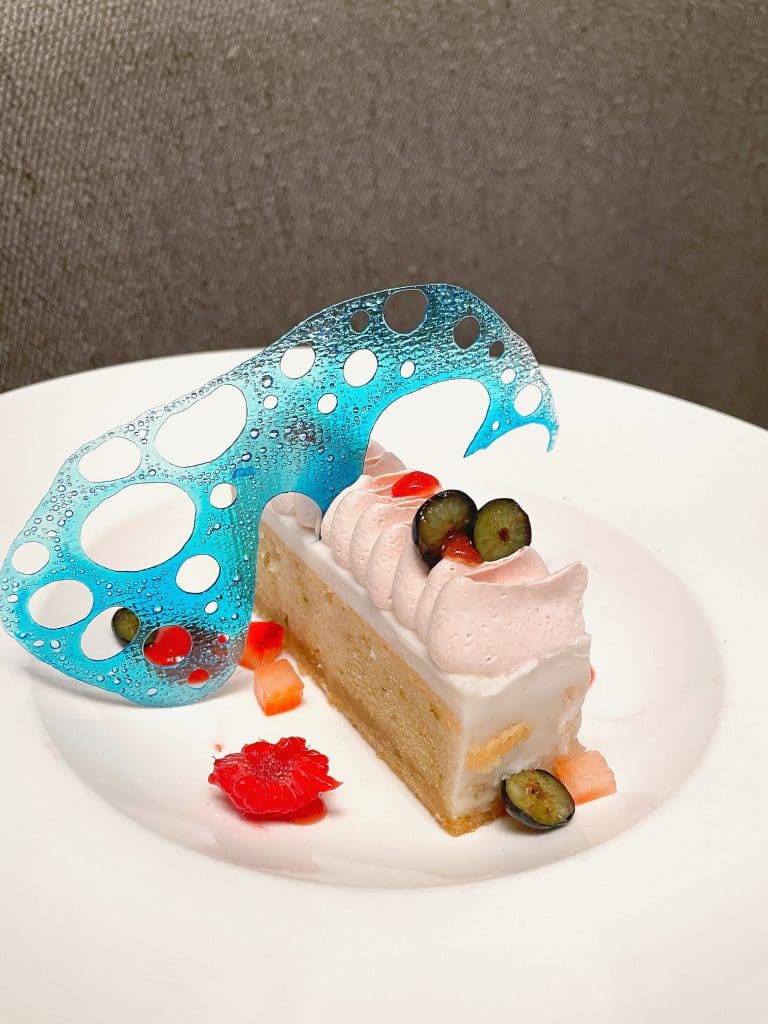 Now I will preface this by saying I am a chocolate person. I do, however, love a good key lime flavor and tropical flavors, but the guava here was a bit much for me. The cake itself is sweet and not too flavored, which balances the toppings. The white parts on top have a very tart lime flavor, and the pink is very tart guava flavor. So if you know you love those flavors, you will love this. The berries were a nice fresh touch and the sugar art wave was so beautiful and yes I crunched some of it up and it was pure sugar and delicious. 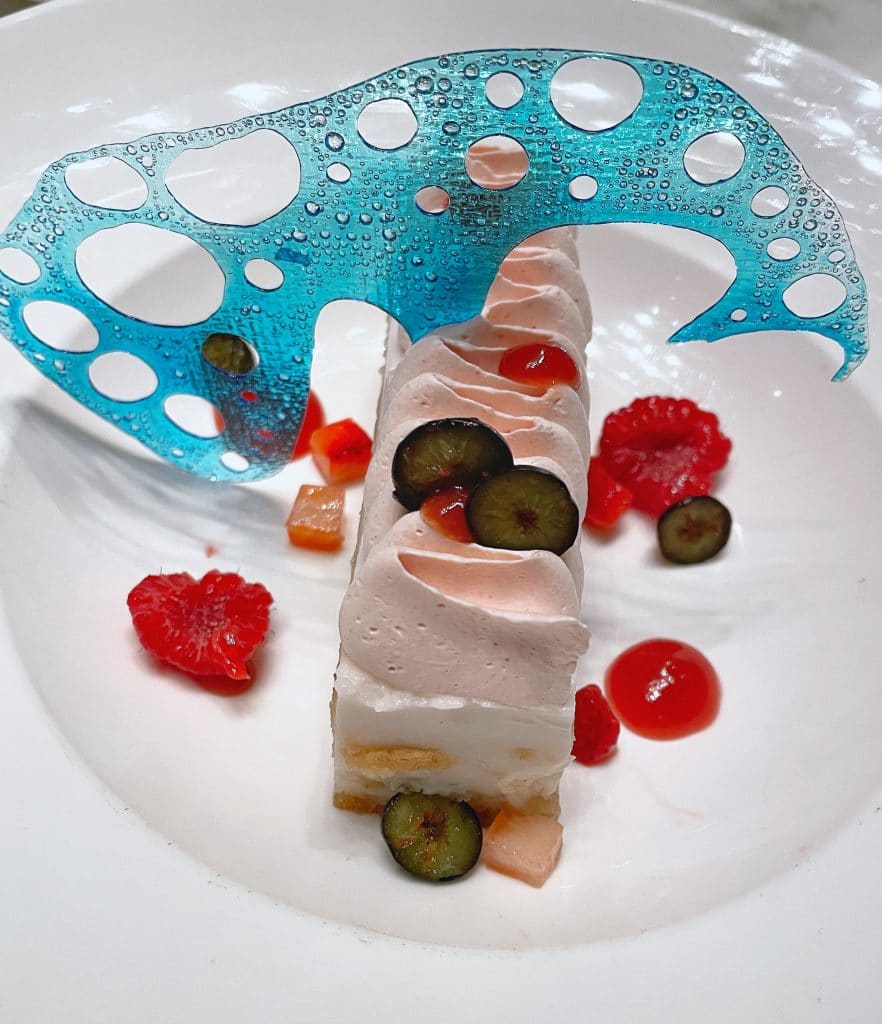 My takeaway here was that when Disney chefs put in the effort, they can come up with some absolutely breathtaking VEGAN desserts that don’t make people say “oh, it’s vegan” but rather say “I want to order that!” so I think this was definitely a hit in that department.

We also ended our night with a French press coffee and some almond milk, mostly because I had smelled the table behind us order this and I cannot resist coffee. 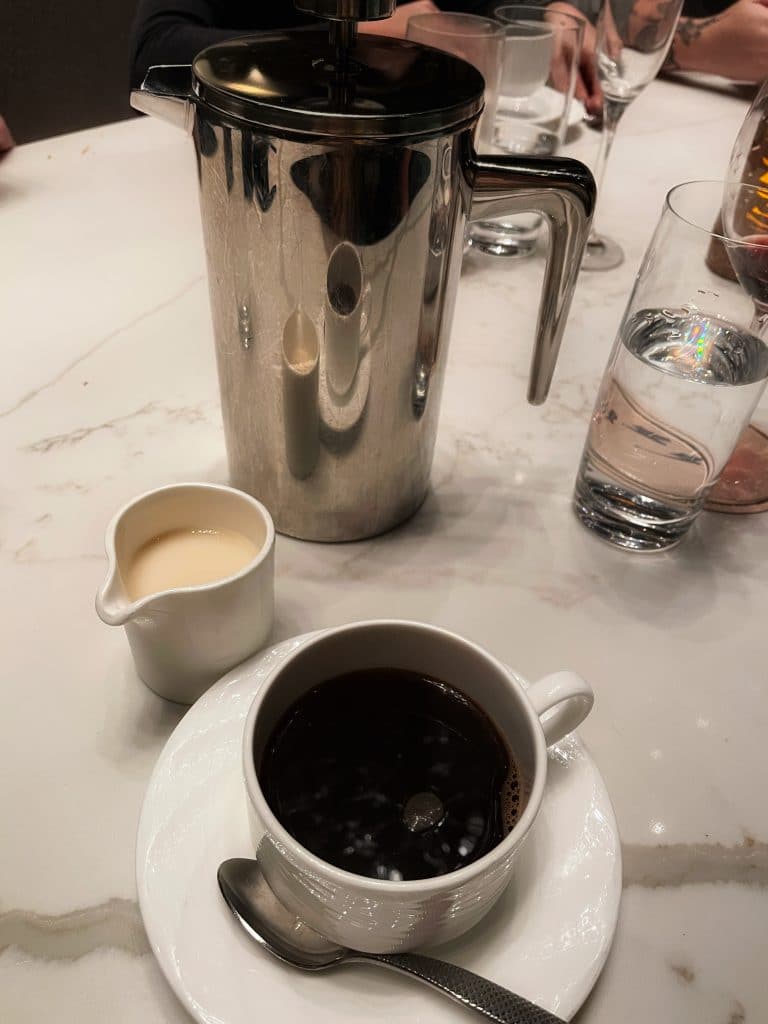 Overall, I can and do recommend Flying Fish for those wanting an elevated dining experience with vegan dishes everyone can enjoy. You definitely feel like you are in a Signature Dining location with the atmosphere and service. As I said to a friend, it’s kind of like California Grill without the view. I enjoyed it, but I know for these prices, people may expect a more unique entrée. At the same time, many folks prefer a non plant-based meat entrée, and it is hard to please everyone. While I would of course love multiple options on every menu, I really enjoyed the entrée personally. This would be a lovely celebration spot or a fancy date night. 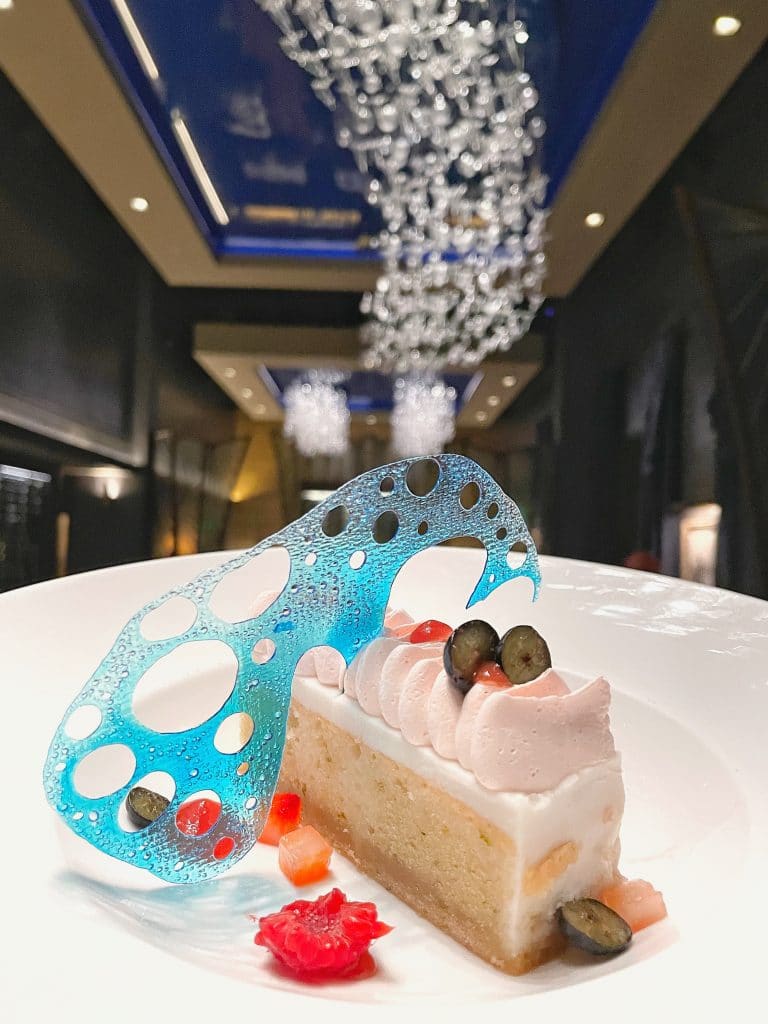 Have you dined at Flying Fish before it closed? Let us know what you think of the new menu and if you have plans to visit with the new menu.