A fan favorite is finally returning to Disney’s Typhoon Lagoon Water Park in Walt Disney World – H2O Glow Nights after hours event is full of fun and food – we’ve got the vegan treats you can enjoy! My predecessor previously attended this event when it debuted back in 2018, and you can read all about her experience and the offerings at the original H2O Glow Nights. This year, Disney is adding even more food and they got a little crazy with the colors! We tracked down all the plant-based options so you know what you can enjoy if you head to this after hours ticketed event. 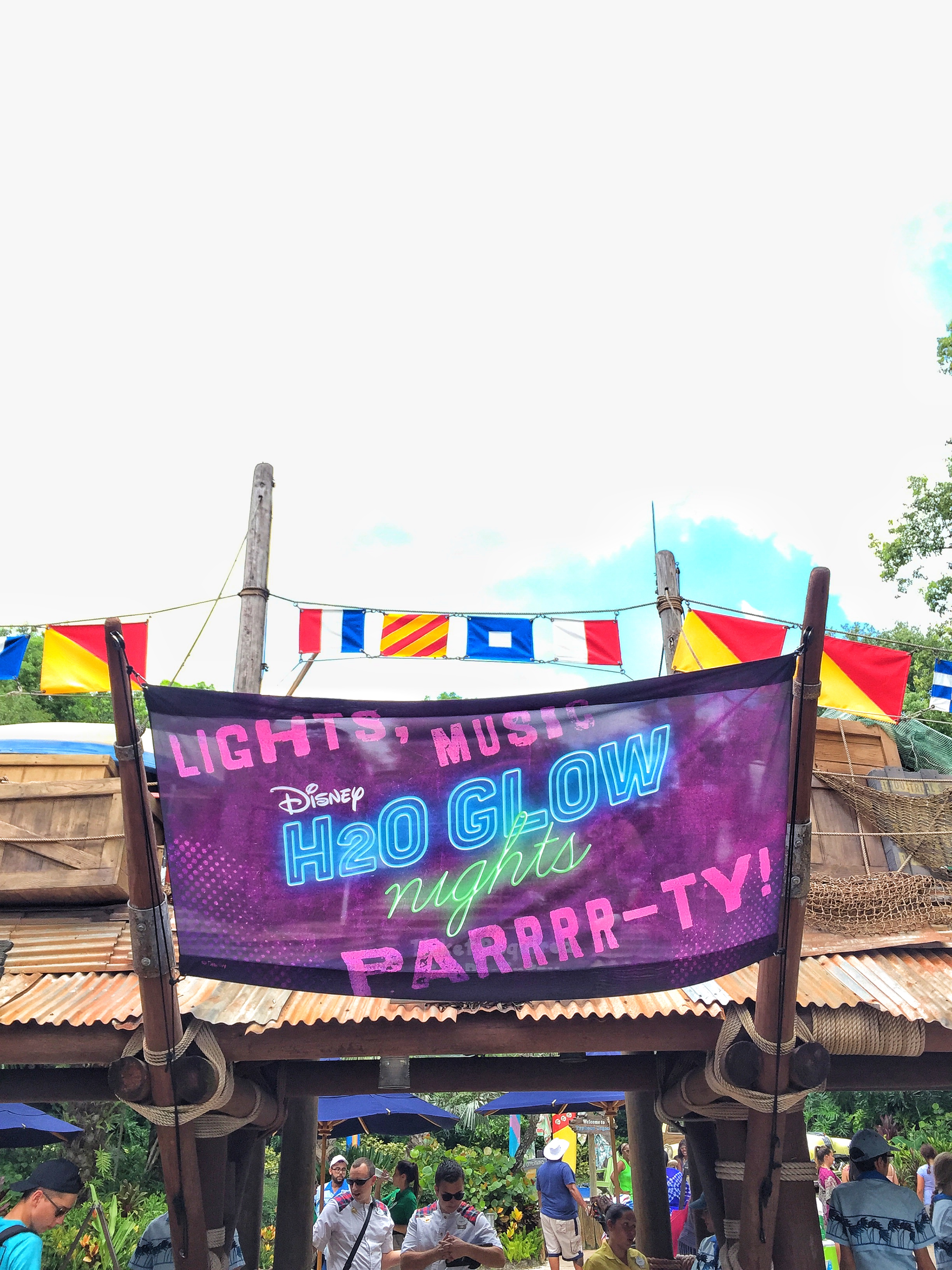 If you haven’t heard of H2O Glow Nights, basically it’s a (kind of) private party when the sun goes down on Typhoon Lagoon water park. They add some fun floaties to the Castaway Creek lazy river, some lights and these event highlights:

During Disney H2O Glow After Hours, you can: 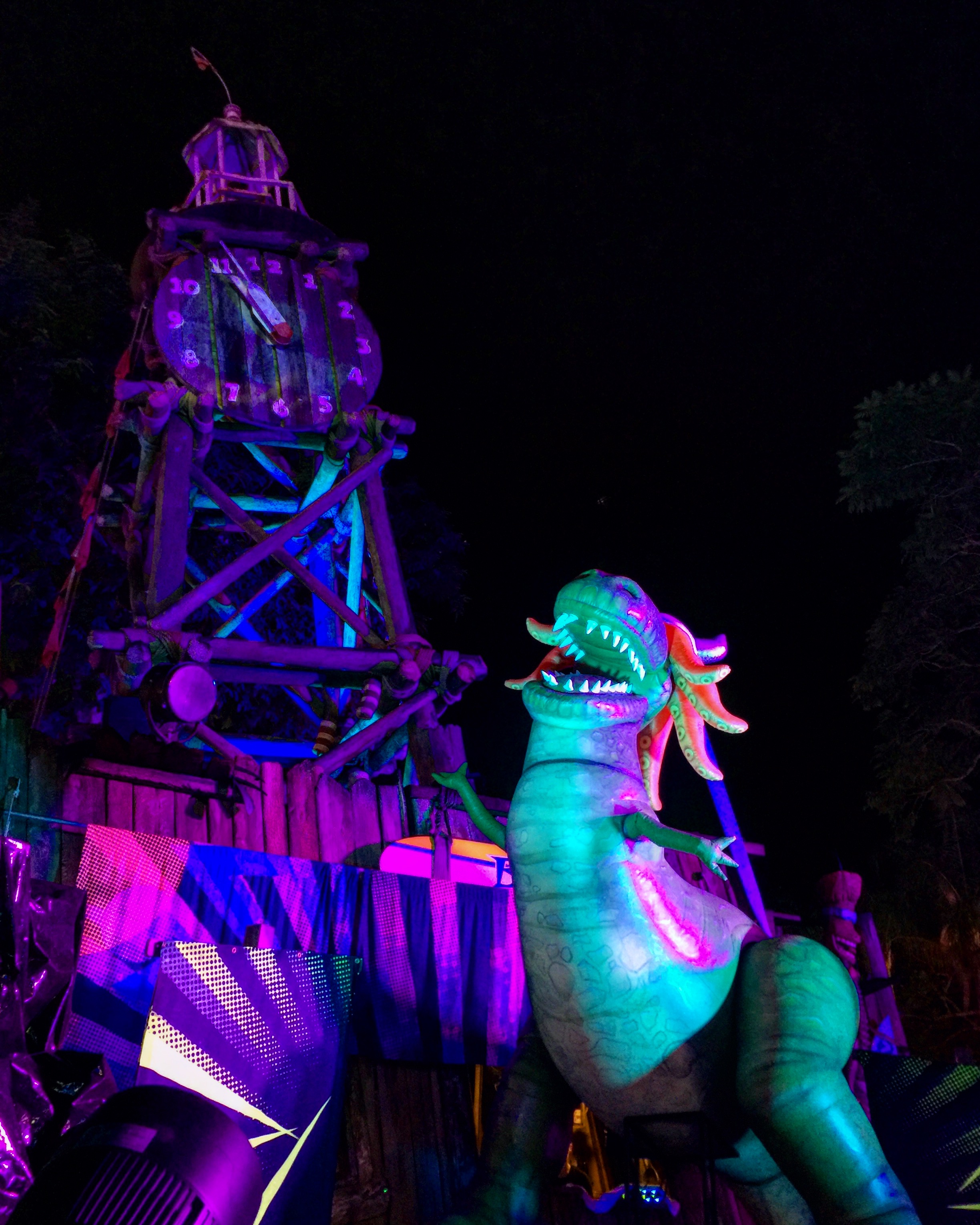 Here’s all the official info if you’d like to get ticket and check it out:

Dates & Times
Disney H2O Glow After Hours at Disney’s Typhoon Lagoon is held on Saturday nights May 28 to August 27, 2022, from 8:00 PM to 11:00 PM. You can get a head start on the fun by entering the park at 6:00 PM—a couple of hours before the event officially begins.

Tickets are limited and may not be available for purchase on the day of the event.

Now let’s get to the vegan food at H2O Glow Nights! This year they’ve added some new plant-based items. Before we jump in – as noted above, you can enter Typhoon Lagoon as early as 6pm with your H2O Glow Nights ticket. You can see what else they usually have for vegan options at Typhoon Lagoon, and some of them may be available too, depending on if they keep the spots open and offer the regular menus.

First up, the Electric Impossible™ Burger available at Leaning Palms. An Impossible burger served on a neon bun with Sriracha aioli, tomatoes, rainbow carrot slaw, and mango chutney. Special thanks to our vegan friend Carise from @TheDisneyFox for sending over these photos! 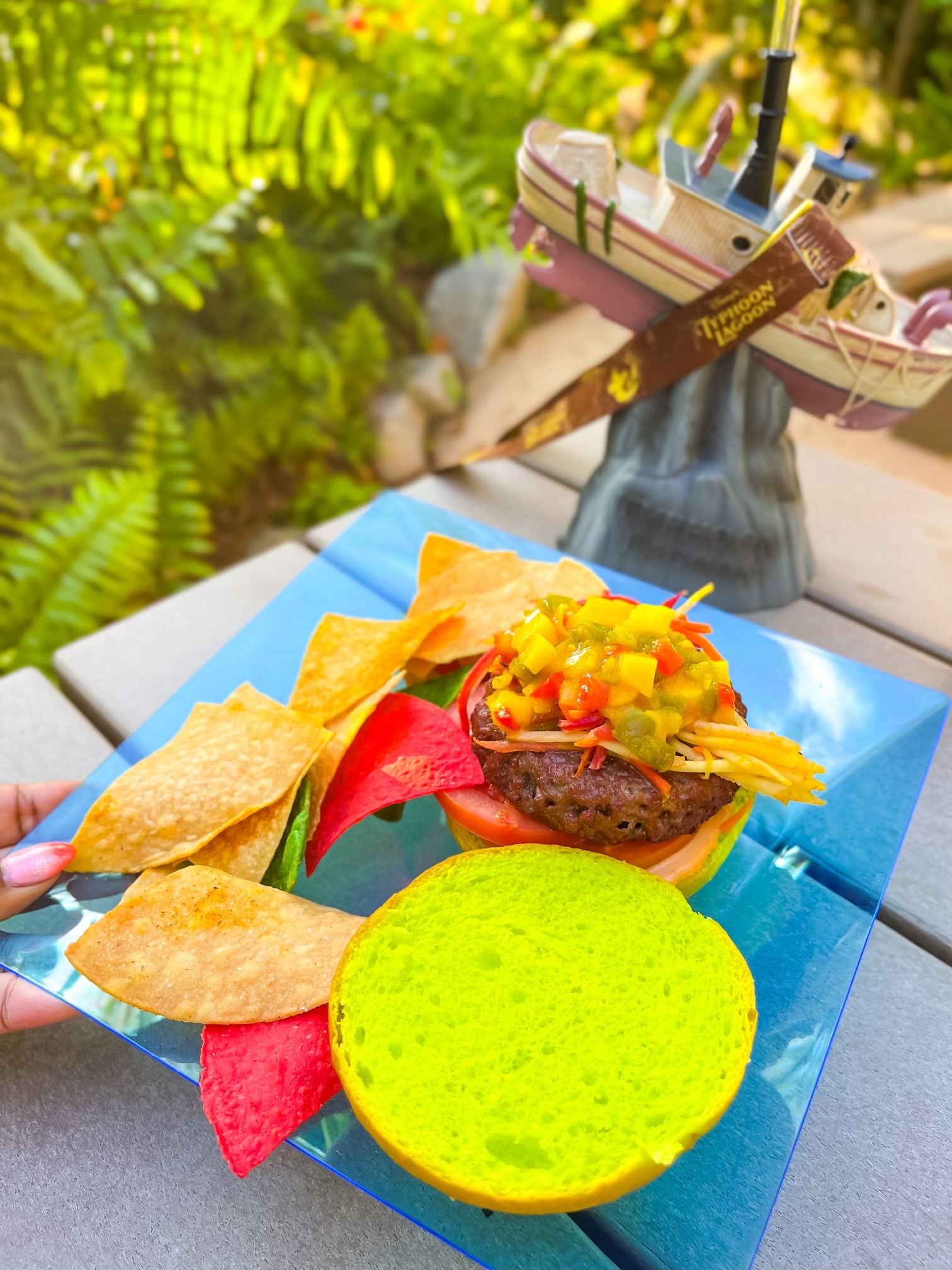 That’s quite an electric bun!! 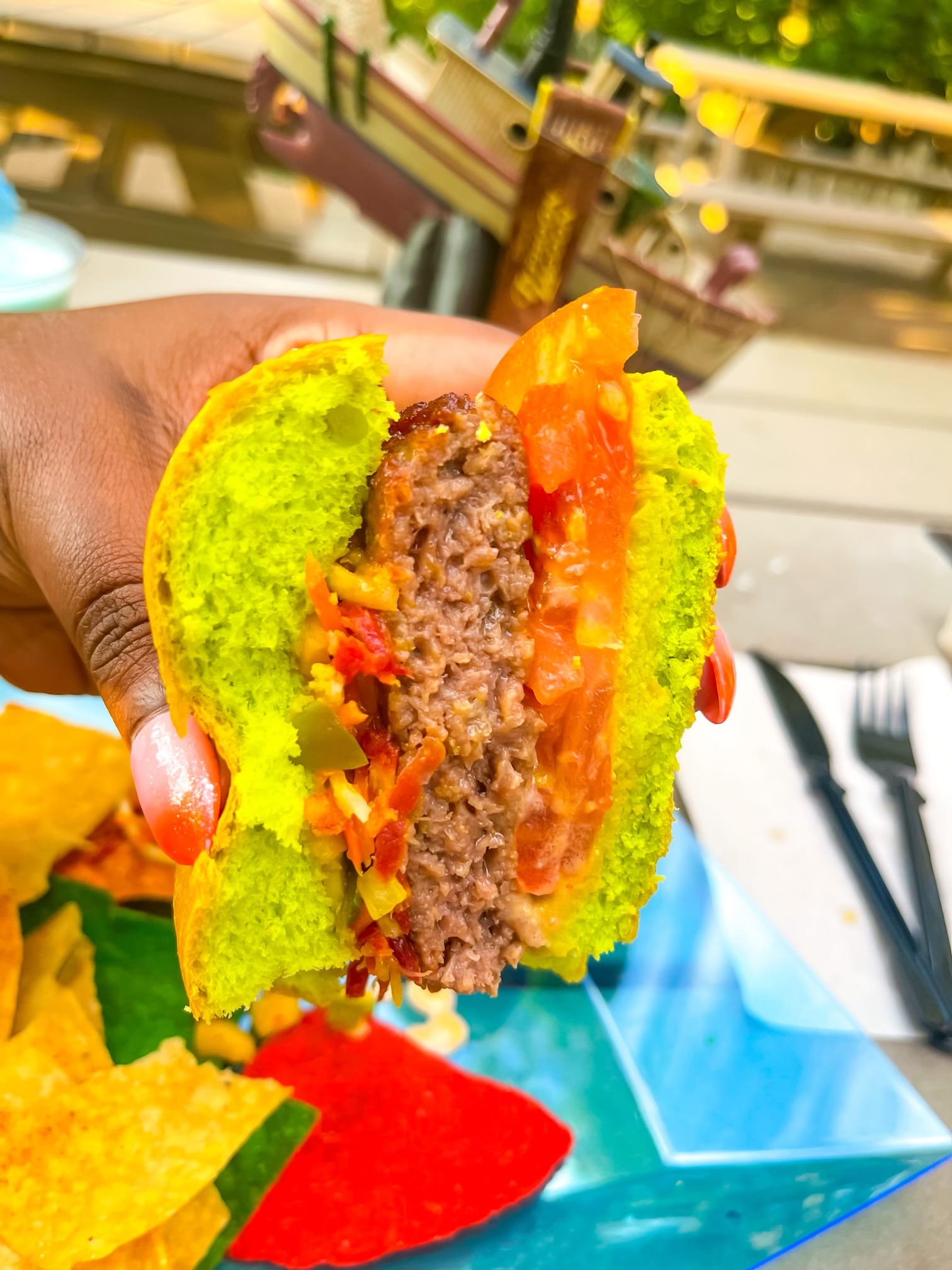 Carise gave the burger a 9/10 saying it was great. It looks so much better than a plain burger!

We have some other photos from the Disney Parks Blog of the vegan Watermelon Poke Bowl available at Typhoon Tilly’s: 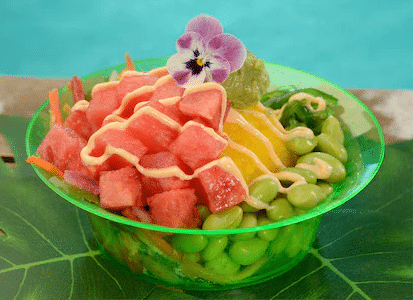 Also available are Rainbow Salted Mickey Pretzel with party cheese – obviously you’ll nix the cheese on these, but they look a little gross anyway! 😛 They are vegan without the cheese. You can find these at the Tropicalamity Cart 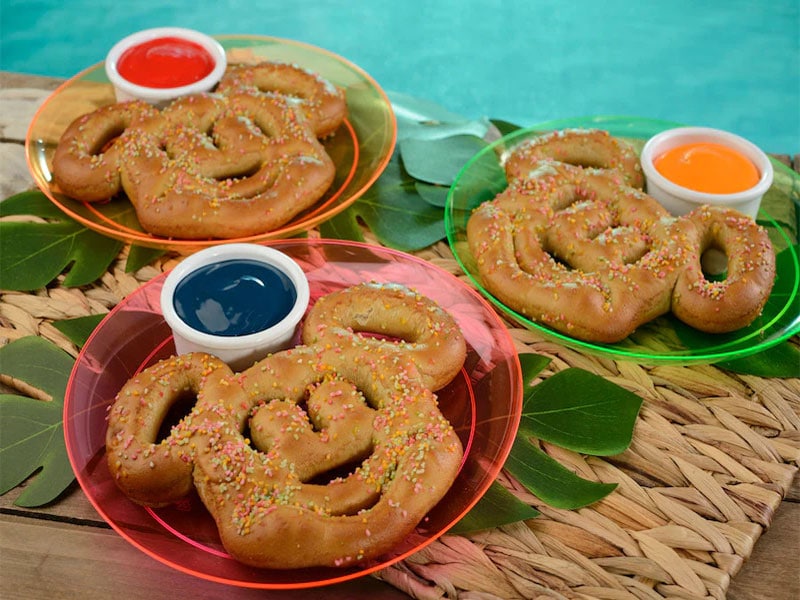 At the Snack Shack, you can find: the (We Don’t Talk About) The Bruno Cone which is Dole Whip Lime cloaked with Bruno’s candy vision served in a dipped waffle cone and a chocolate rat along his back. This item would be vegan (just lime Dole Whip) without all of the accessories on it, but double check on the cone ingredients.

There is also Watermelon Dole Whip available in a cup, cone, or swirled with original Pineapple Dole Whip. Most of the other sundaes contain dairy ice cream or whipped cream. 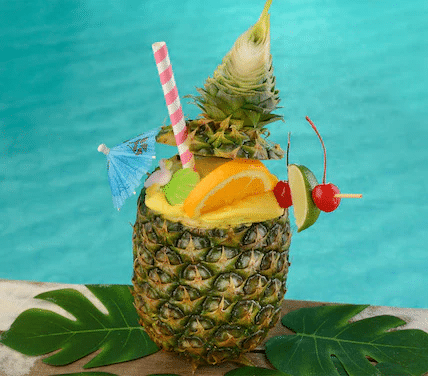 Some drinks appear to be vegan, but again, I’d check on ingredients to be sure. Below is the Encanto Lemonade: Guava passion fruit lemonade with a sugared rim and edible flowers (non-alcoholic). Also the Lightning Punch: Bacardi Superior Rum mixed with tropical flavors, green apple mix, pineapple juice, grenadine and topped with a glow cube

This year you can also purchase a Miss Tilly Sipper Cup with a non-alcoholic specialty beverage: 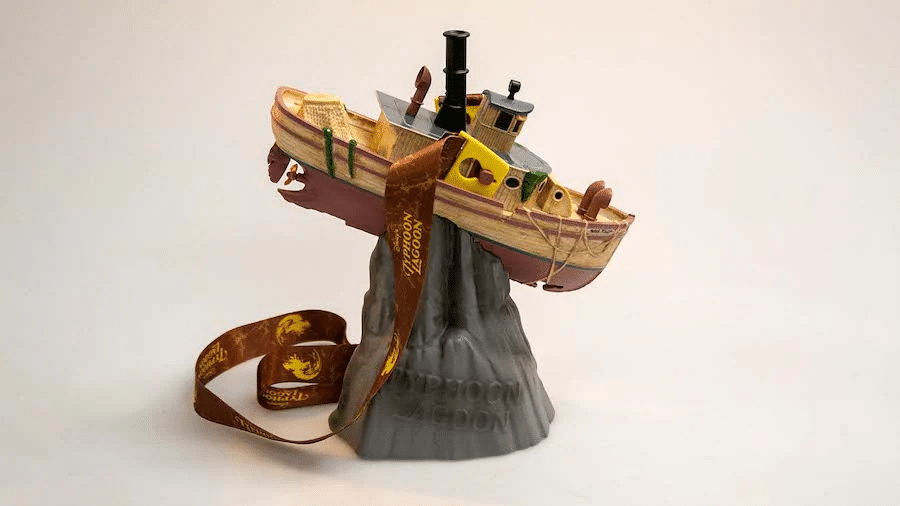 You can see it at Typhoon Lagoon in the burger photo above!

That’s all the vegan items you can enjoy at the H2O Glow Nights After Hours event at Typhoon Lagoon. Special thanks again to Carise from TheDisneyFox for sharing their photos – be sure to follow them on Instagram for lots of Disney and beyond!

Will you be glowing this summer? You sure can’t beat a view like this!