Disney’s California Grill has been a roller coaster of plant-based items since reopening – and we now have some all-new vegan items joining the menu. Prior to the parks and restaurants closing in 2020, California Grill was a favorite for vegans, with the “Vegan Unplugged” menu option, giving us 4 different delectable items to enjoy. With reopening, we had only an in-house made, but un-remarkable pasta dish. We then had a California Grill prix-fixe menu for the Walt Disney World 50th Anniversary Celebration, which received mixed reviews for using the same items in the appetizer and main entrée.

However, now there is a whole new plant-based menu added to that prix-fixe 50th Anniversary Celebration menu, and we tried all the things! 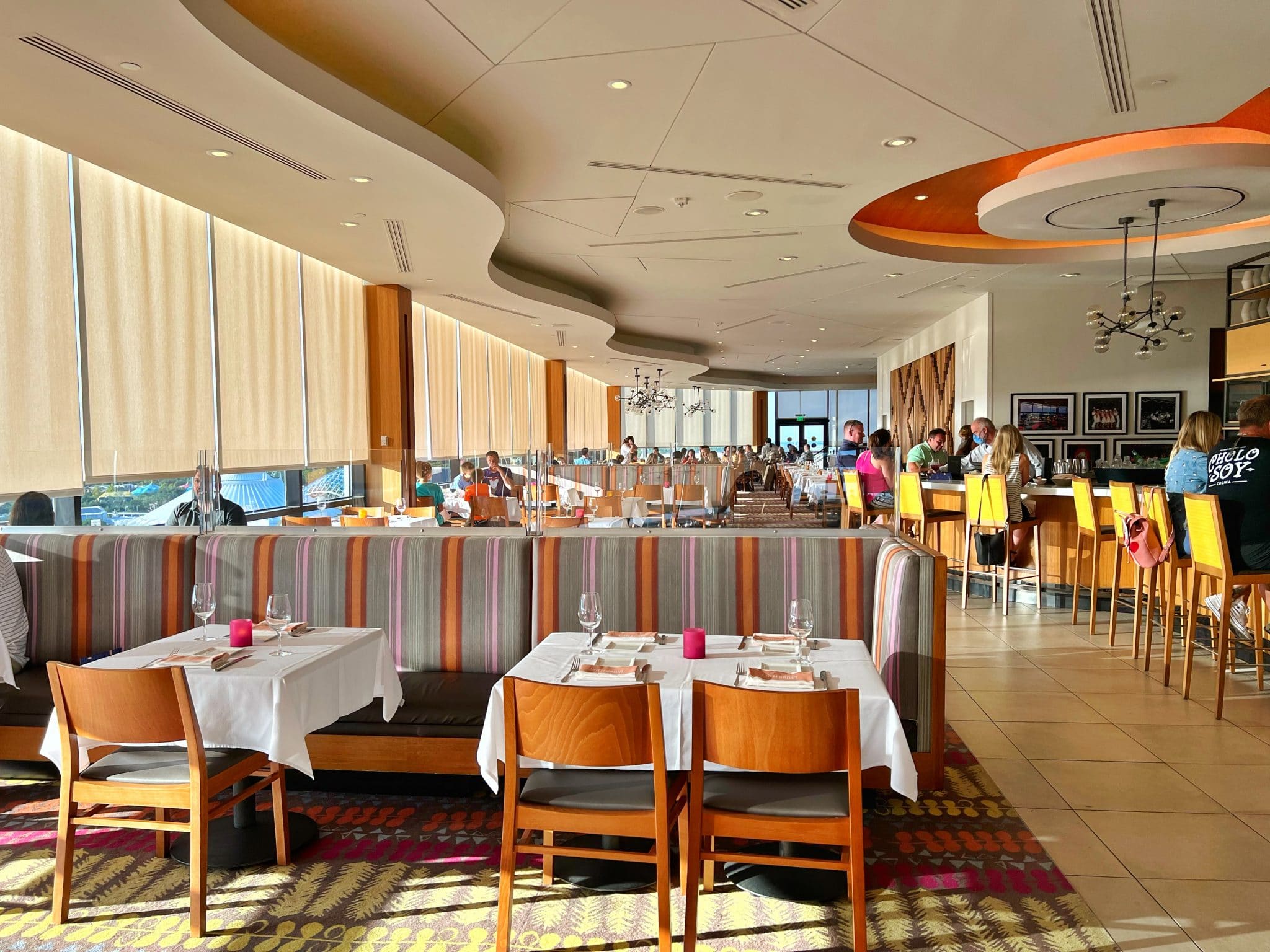 We shared these updates from the Disney Parks Blog last week, and we were at California Grill on opening night of the new menu, to share our review of all the new vegan items with you! 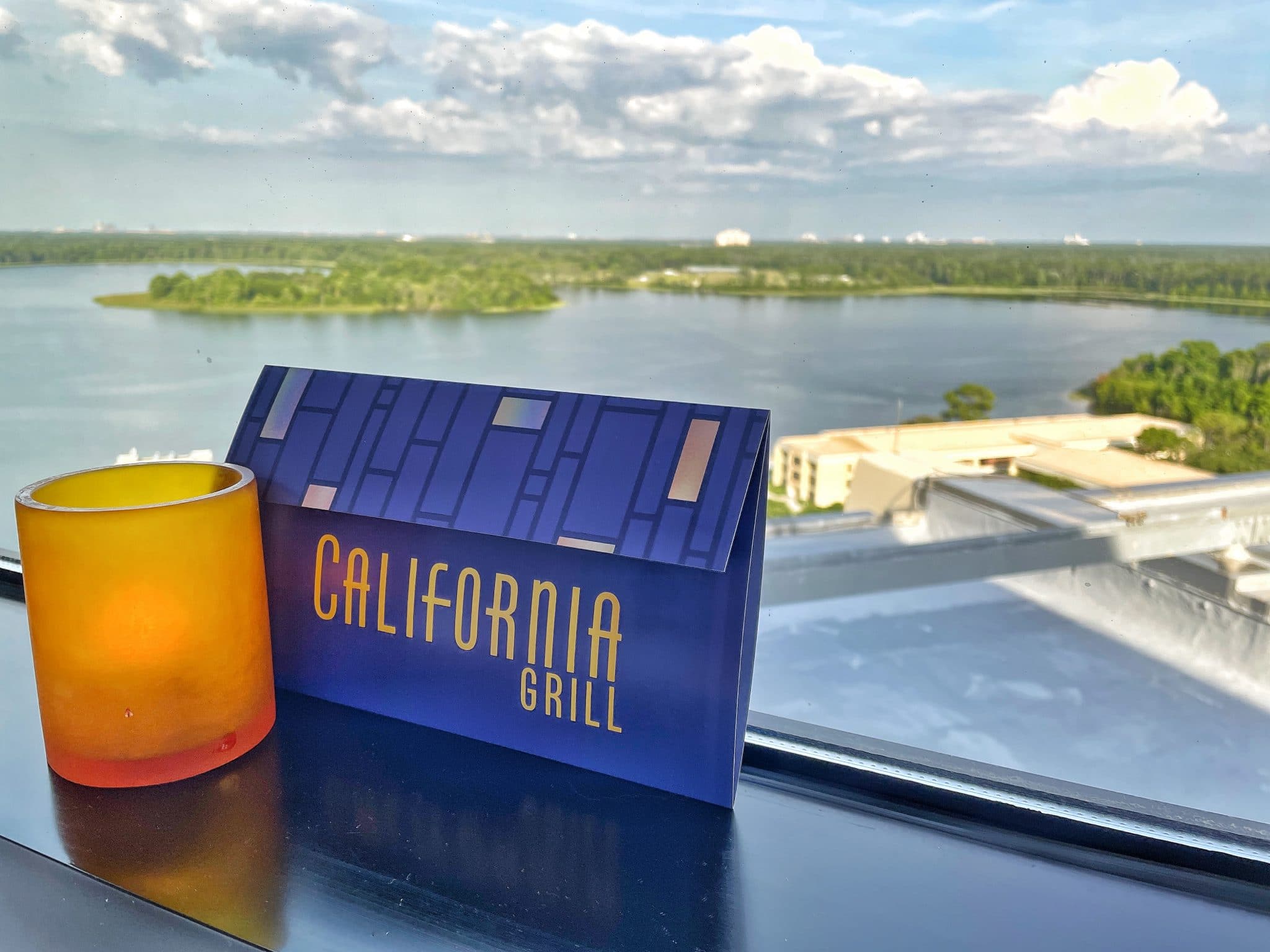 First up, a little more about the menu. The 50th Anniversary Celebration at Walt Disney World is going on for 18 months, so this menu will be here until April at the very least. However, our server seemed to think (unofficially) that this menu was here to stay. It makes sense from Disney’s point of view, now they no longer have people hanging out in the lounge, ordering one appetizer and sitting for 3 hours to watch the fireworks. Speaking of the lounge, it now really doesn’t exist anymore. Every table in the former lounge area is now a regular dining room table. The bar is still there, but that’s it. So while the price point at $89 per person for this menu is a little hard to take, it does put California Grill firmly back in the “special occasion” category of restaurants. I will say with this new menu, I do feel like as vegans we are getting our money’s worth, which I didn’t think before this update. Your mileage may of course vary. 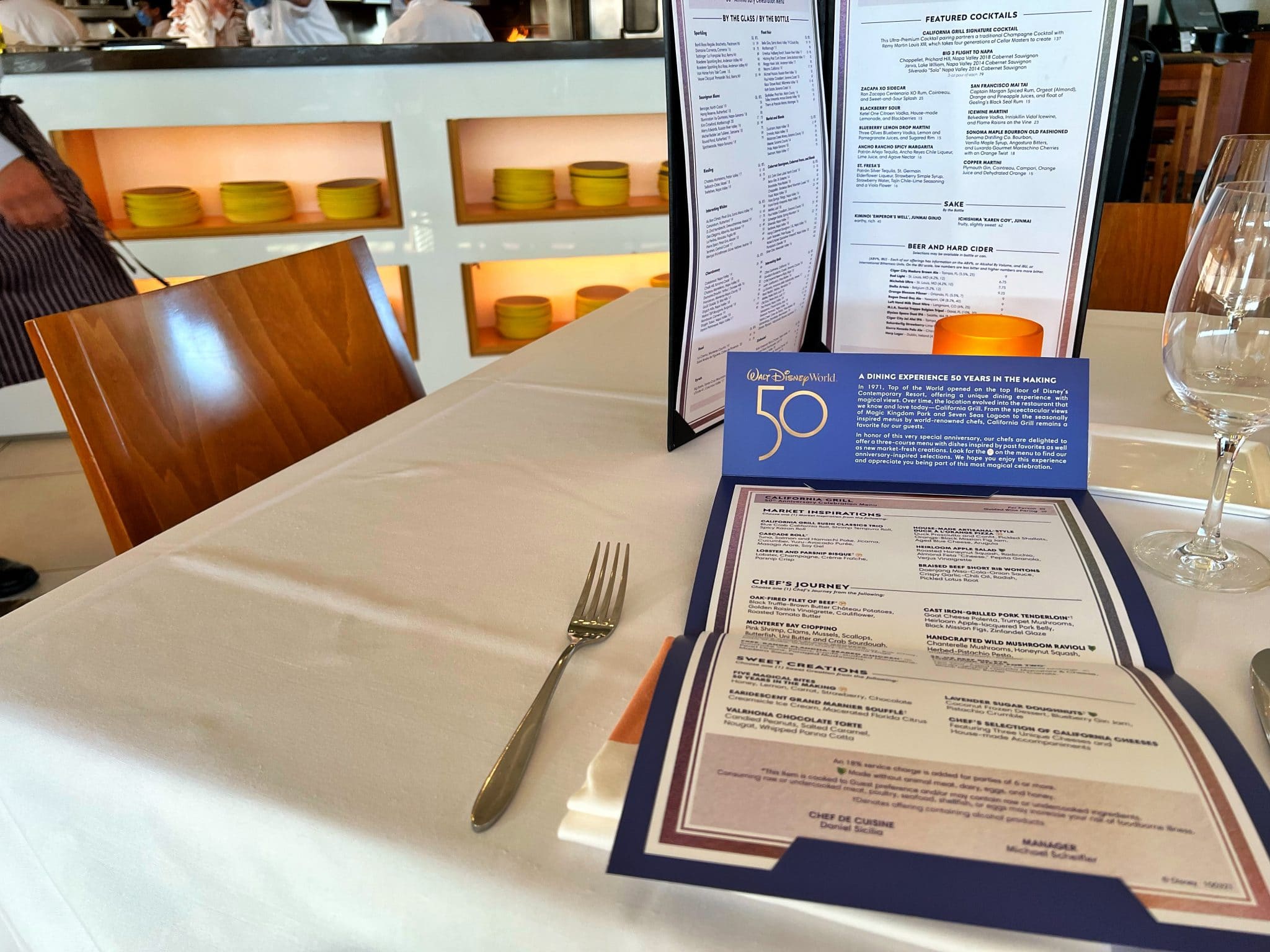 A quick note – as of our visit on May 26th, the regular menu featured another item with the plant-based leaf logo on it. It was a Key West Rock Shrimp salad. Being a vegan, I’m used to “shrimp” or “chicken” being in quotes and not being the real thing but rather a plant-based version of the meat item. So I asked our server if we could add that and yes, once you choose your pre-fixe items, you are able to add additional items. So I added this salad, excited to try Disney’s take on vegan shrimp.

A few dozen photos and videos later, I moved one of the crisps on top of the salad to look for the hearts of palm or the “shrimp” and I found the shrimp. Real shrimp. Sooo, I asked the server what was up with that, and he said he was confused as to why I was ordering it, to which I replied, “because it had the leaf logo!” So we removed the salad from our table and the bill. He confirmed it was a printing mistake, so hopefully they fix that asap, but if you visit before then, be aware, it’s NOT vegan. Additionally, even if you take the shrimp out, there is still honey in the dressing. See photos below so you know what to look for.

That dangerous faux-pas aside, you start your meal with herbed focaccia bread served with tomato, garlic, and chives in olive oil. I love a good focaccia and this is a good one.

For vegans, the appetizers we DO have to choose from are the Florida Peach and Raspberry Salad and the Vegetable Dumplings. These options couldn’t be more different, so there really is something for every palate here. The Florida Peach and Raspberry Salad is probably one of the most unique dishes I’ve ever had at Walt Disney World. It features grilled and fresh peaches, raspberry variations, steel-cut oat granola tart, red onion, and a whipped raspberry vinaigrette. 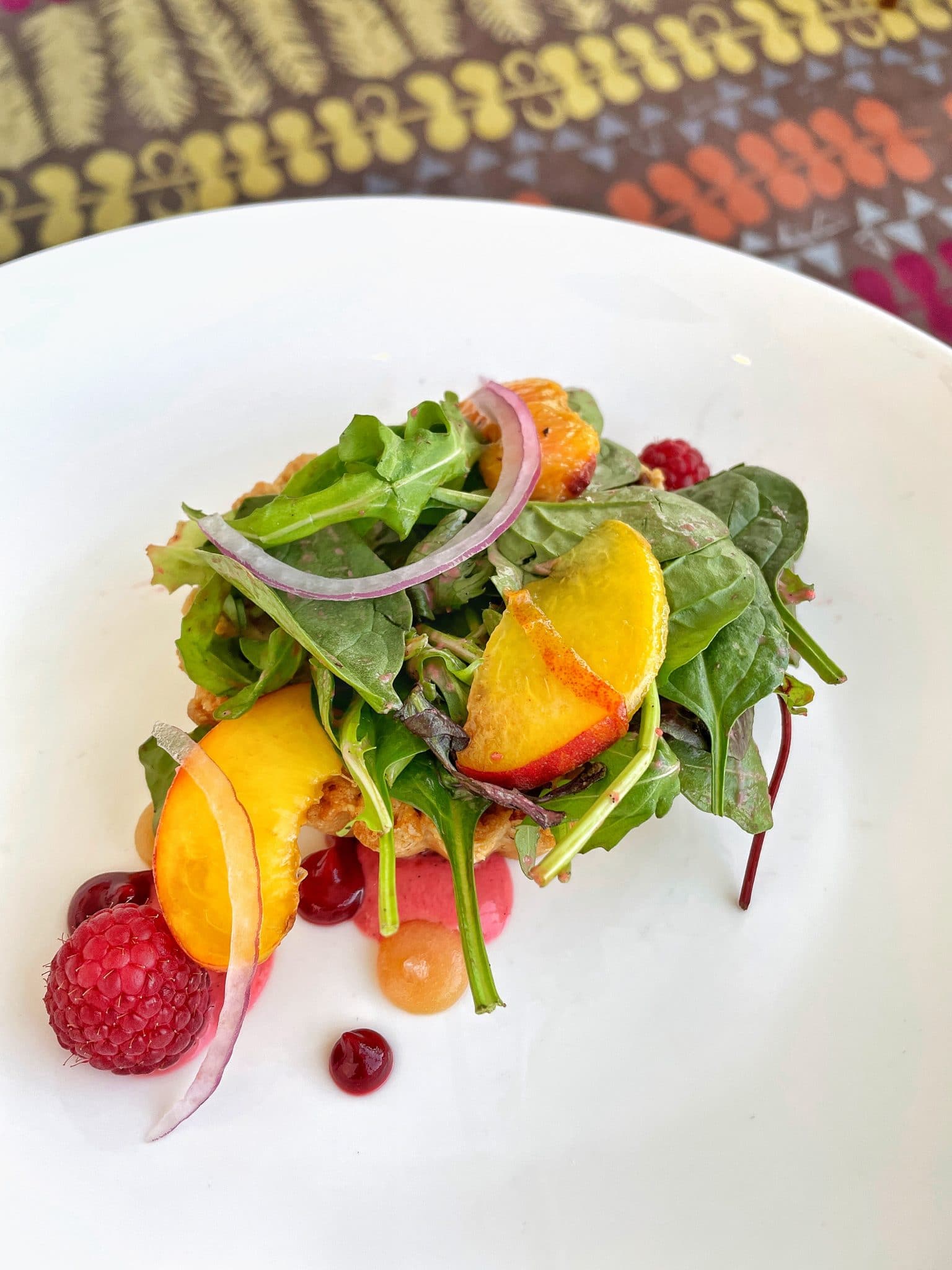 Raspberry variations seemed to be just dollops of raspberry goo, in red and white raspberry form. The tart itself was almost like an oatmeal cookie. It is sweet, and in fact, everything in this salad is on the sweet side, aside from the greens. Even the dressing is sweet. So keep that in mind. It was really delicious, I loved it, but it felt almost like a dessert. The tart itself is pretty big and very filling too. 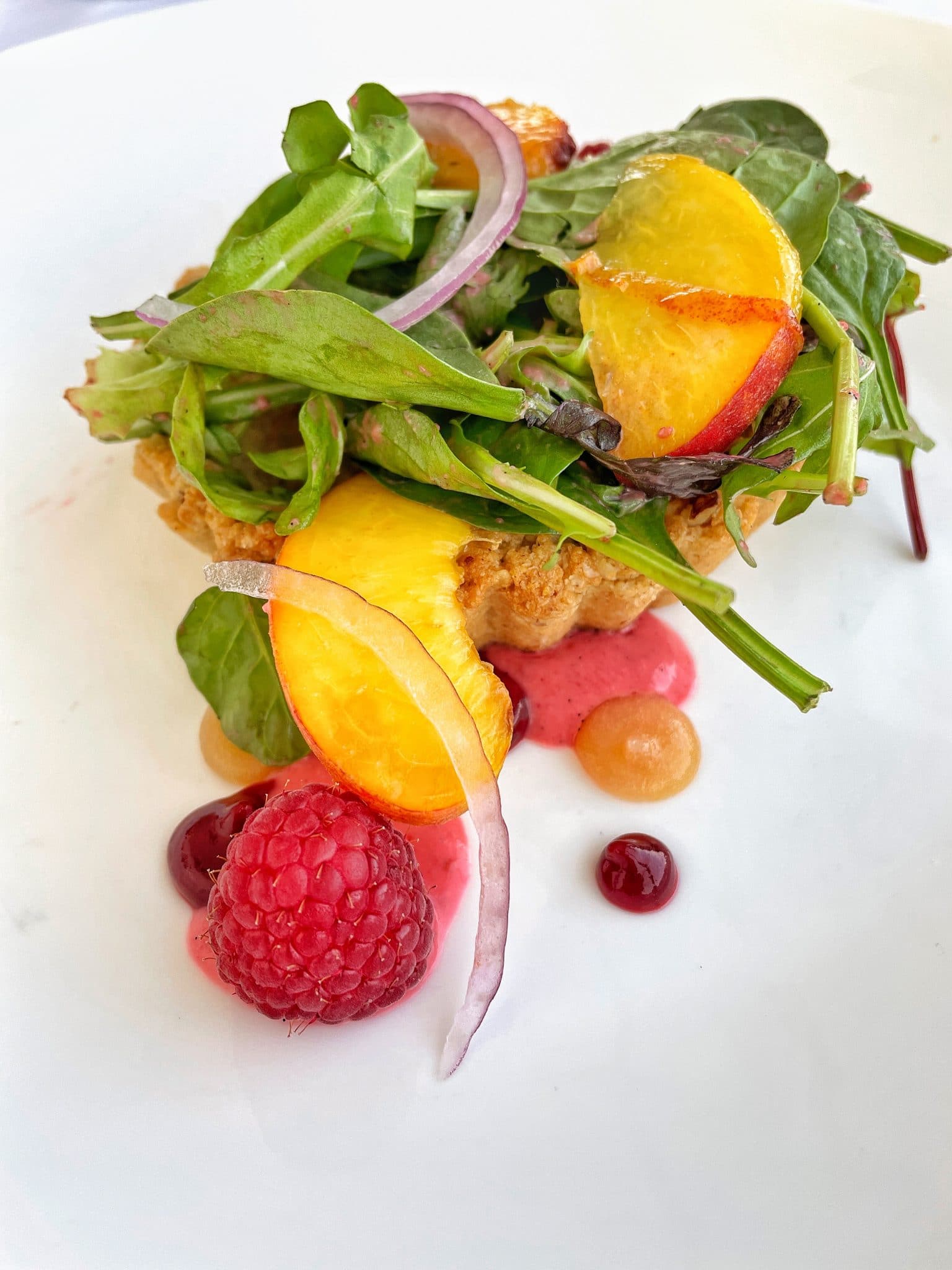 The Vegetable Dumplings are the vegan version of the braised beef dumplings on the regular menu, so again, if you have omnis with you, this flavor profile is the same except for the filling. The dumplings feature a Doenjang miso-cola onion sauce, radish, crispy garlic-chili oil, and pickled lotus root.

The crystal dumpling dough is so smooth, mixed with the filling makes for some really interesting textures. These dumplings DO have a spicy kick to them! The sauce on top is filled with red pepper flakes so be aware of that if you can’t handle spice. I really enjoyed the kick and the flavors in this dish, I just wish there were a few more dumplings in there. 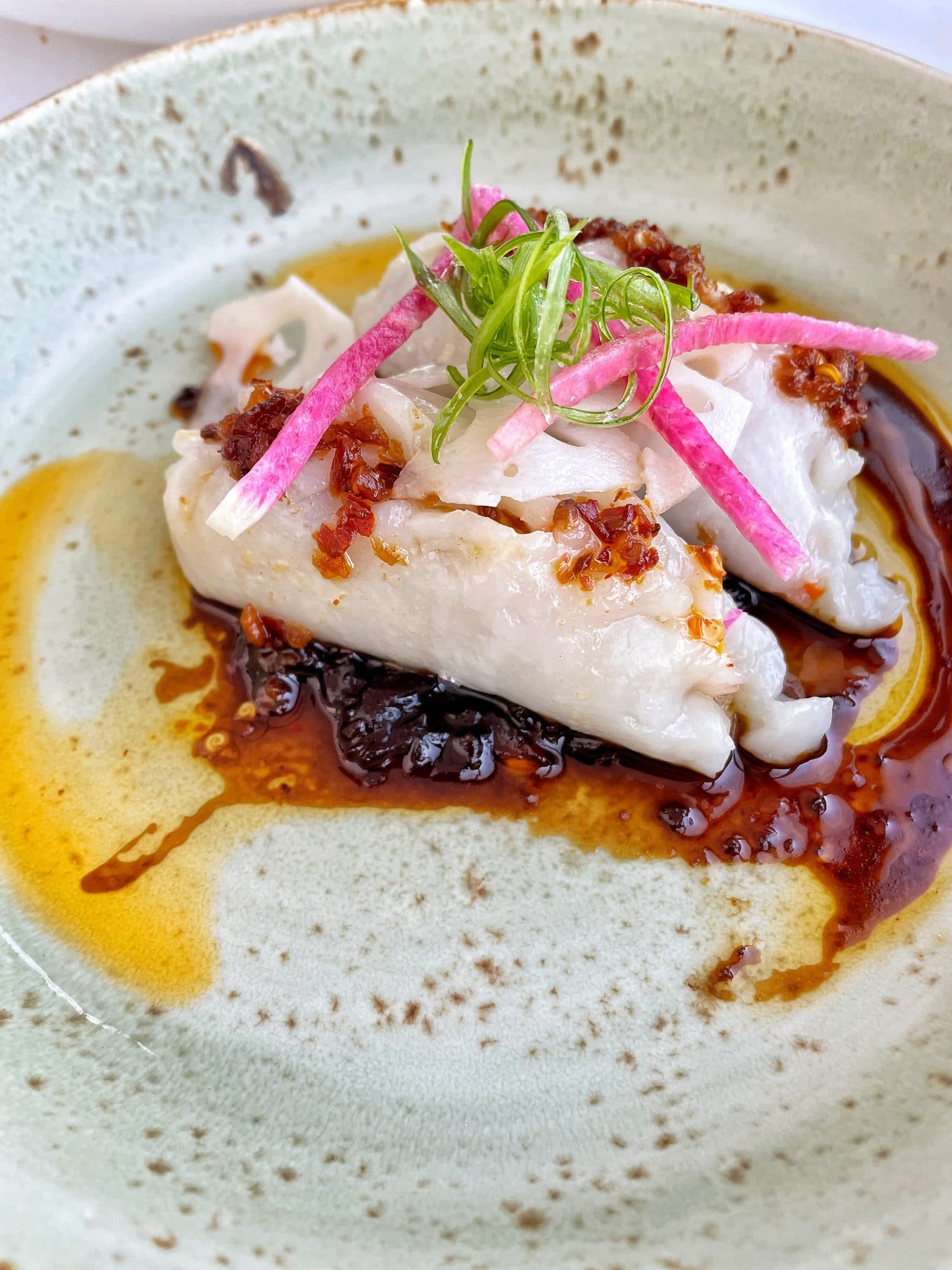 The two vegan entrée options had me a little nervous, remembering the past pasta dish, and seeing photos of the risotto which was being served for a week or so before this menu update. However, I truly loved both dishes! 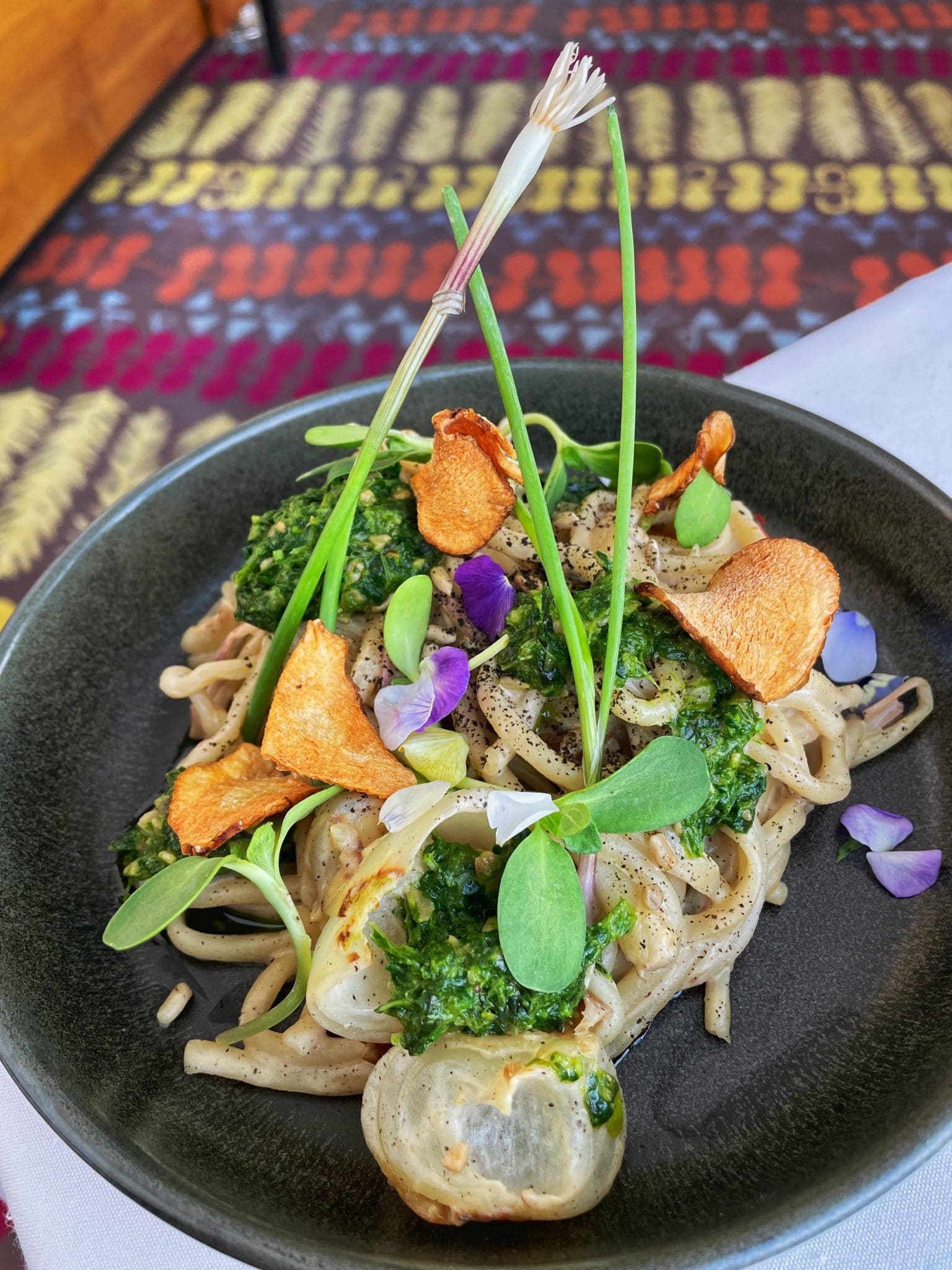 The Bucatini Cacio e Pepe is really well-done and not mushy at all. The bucatini was perfectly cooked and there was a good sized portion. The flavors of this dish are sunflower, allium, crispy sunchokes, charred green onions, toasted onions, and a sunflower seed-ramp pistou along with the house-made bucatini topped with a luxurious cashew cream sauce. 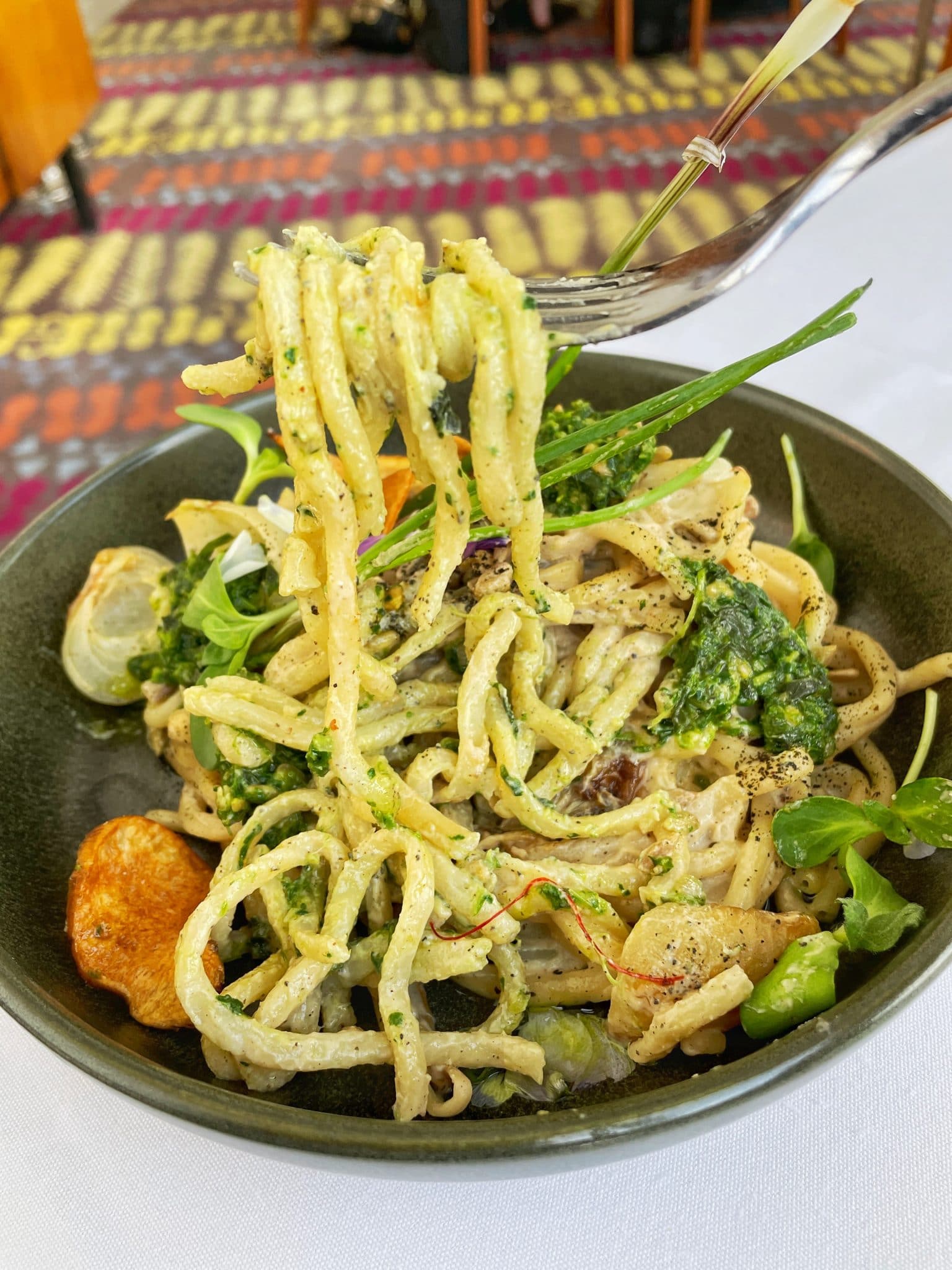 The sauce and pasta itself is on the heavy side, not as heavy as an alfredo-style sauce, but it isn’t as light and springy as the risotto. The seed-ramp pistou was very pesto-like and added a nice bright flavor to the pasta. 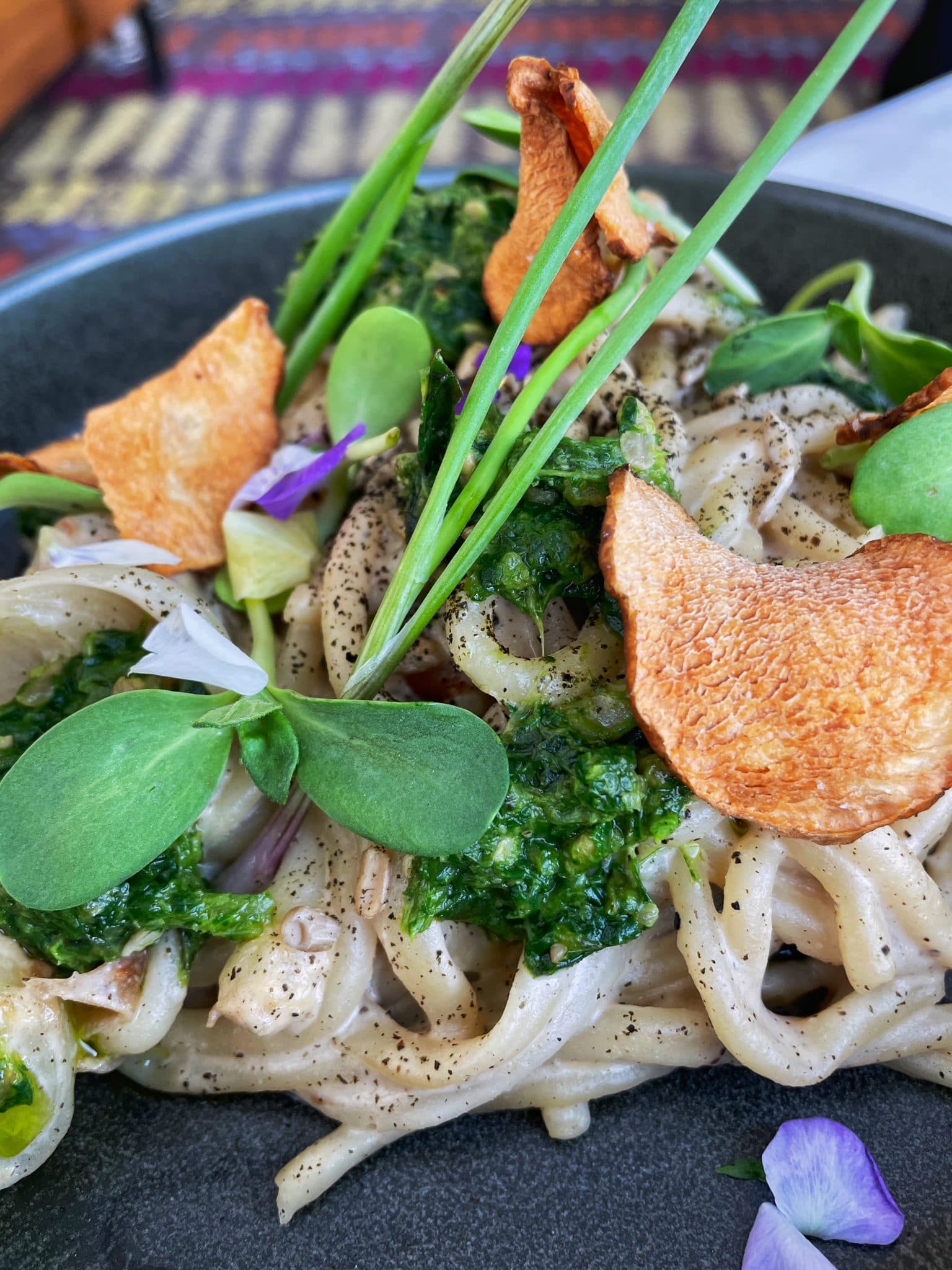 The kinks they were working out with the risotto seem to have been ironed out, as this risotto was perfectly cooked and presented. The Peas and Carrots Risotto comes with heirloom carrots, English peas, green garlic, confit onion, and sweet carrot foam. 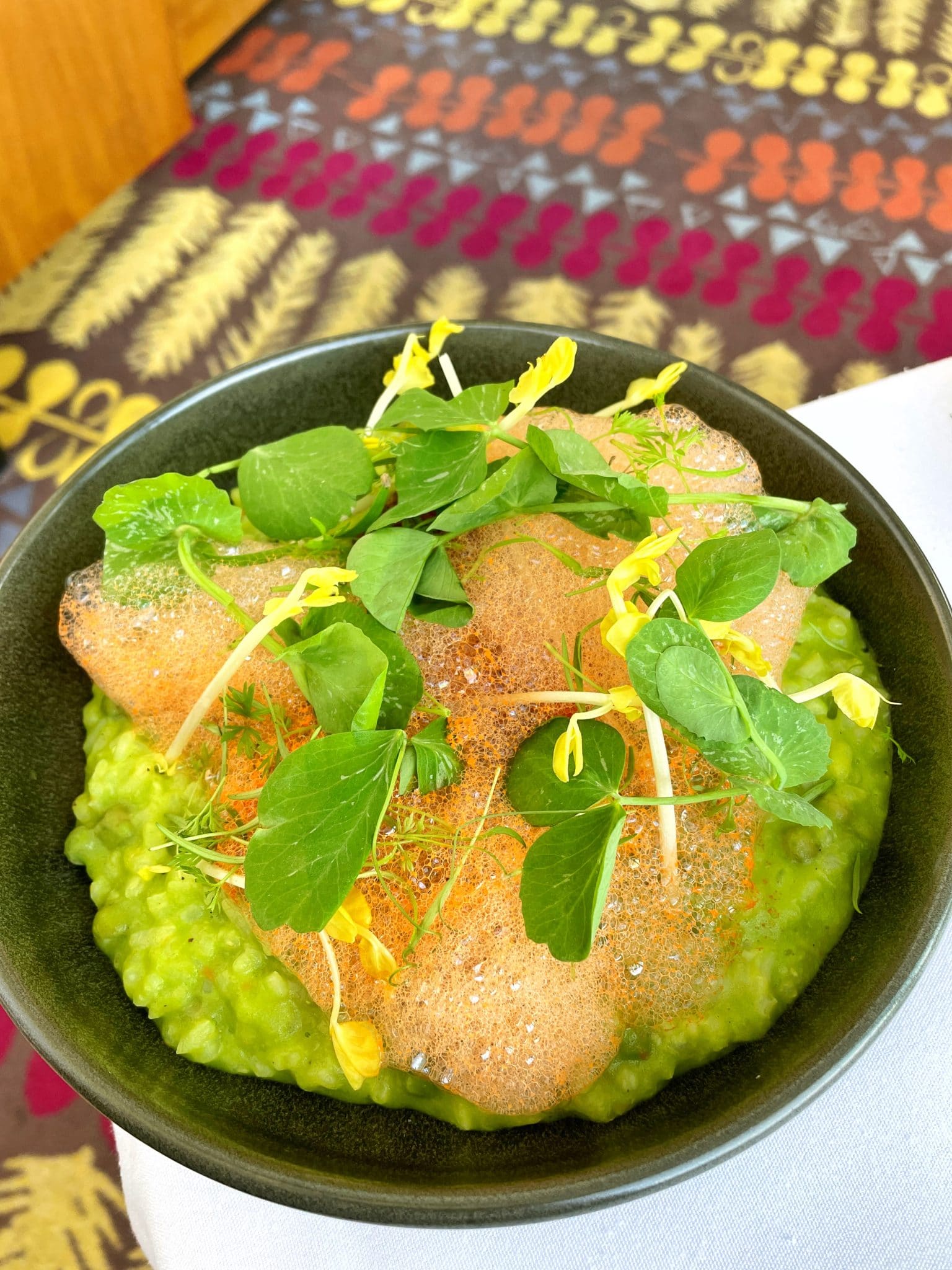 The carrot foam was fun but really does just disappear in your mouth so doesn’t add to much in the flavor department, but the risotto itself is packed with fresh green pea flavor and the carrots pair nicely. This was also a really good sized portion as well as the pasta. You won’t go home hungry! My biggest issue will be deciding which dish to order when I visit California Grill again. 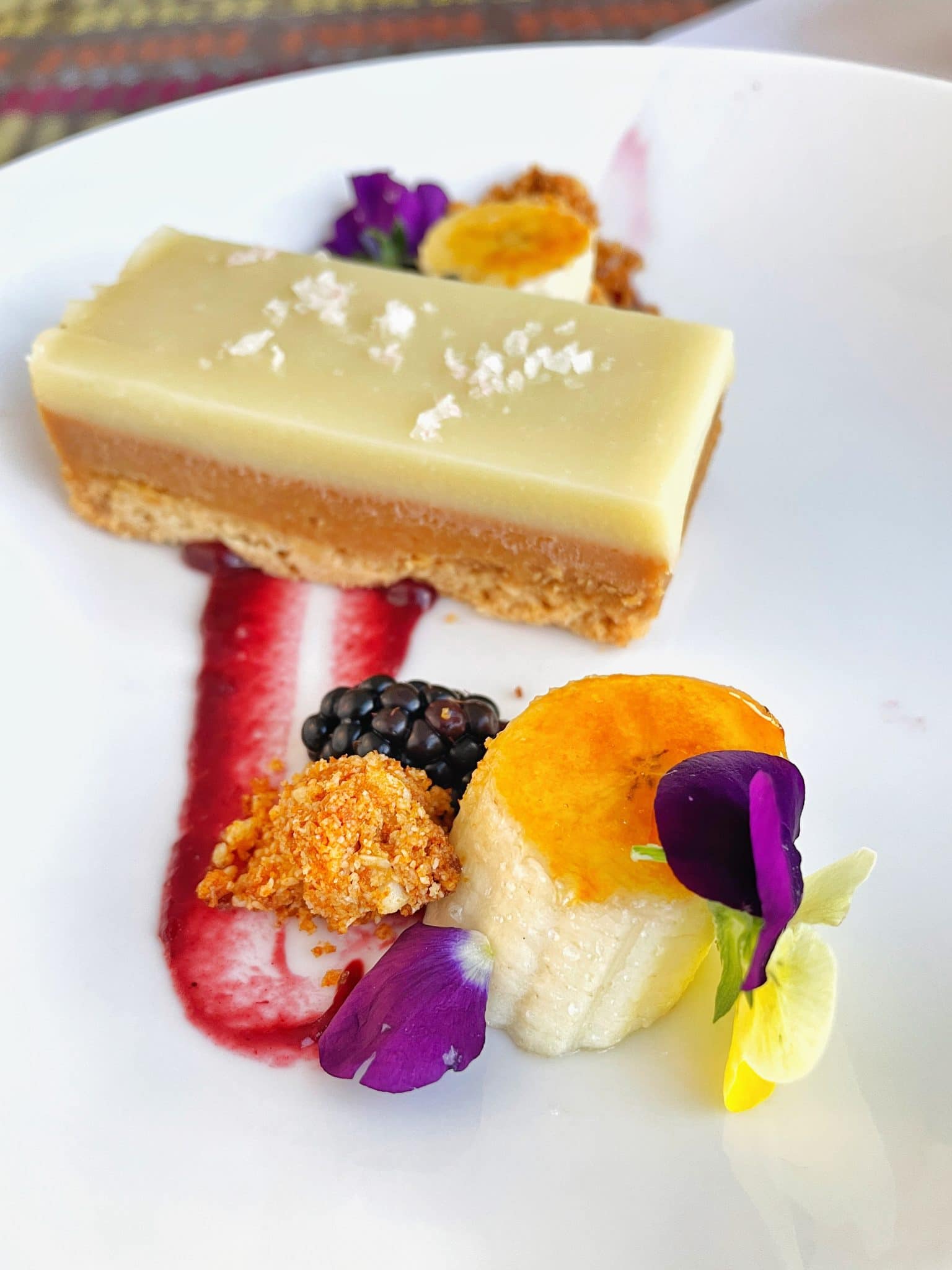 The only banana part is the caramelized bananas, the peanut butter and miso caramel are the real stars here. Super sweet, but with the sea salt on top and the fruit, it is balanced out and so delicious. The miso caramel made me think it was some sort of white chocolate until I re-read the menu description. So unique and layered in flavor.

We also tried the Lavender Donuts, which I hadn’t personally had. I’d only tried the previous Blueberry Donuts, which were not sugared, and tasted more like a cornbread type flavor. I actually loved the lavender donuts. They were served warm, a nice crispy shell with the sugar on top and soft cake-like donut inside. Lovely flavors with a blueberry coconut frozen dessert, blueberry gin jam, and pistachio crumble, really delicious. I’m a lavender donut convert! 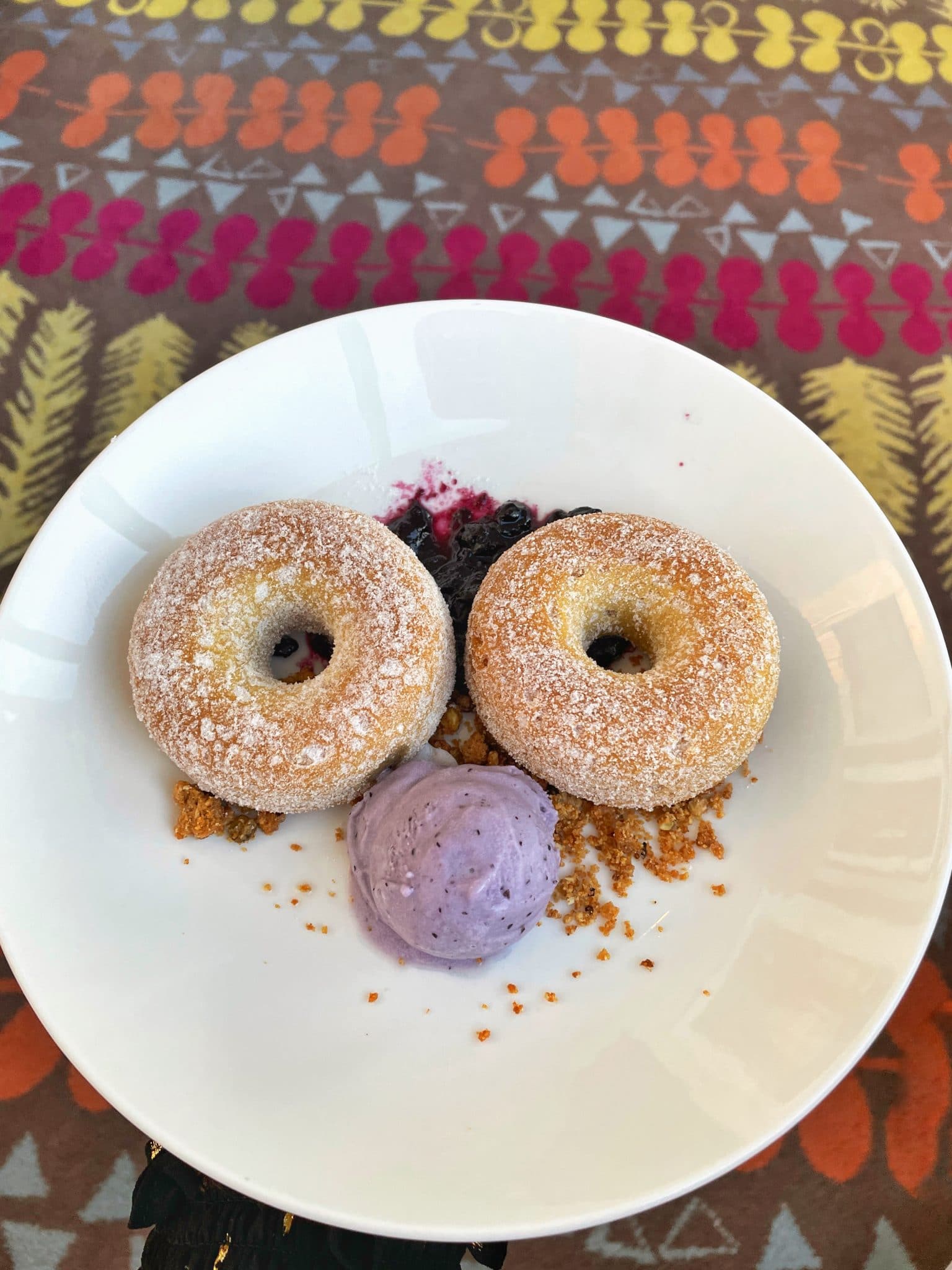 Overall, I can now whole-heartedly recommend this new vegan menu at California Grill. I did not feel like vegans were just an afterthought, each dish is unique and delicious on its own. Again, the hardest part is going to be deciding which item to choose next time. Even my non-vegan husband said he would be getting the risotto next time, so that’s a win!

Let us know if you try any of these options out, and don’t forget to tag us on instagram @VeganDisneyFood or hashtag #VeganDisneyFood so we can share your finds!

We’ll have a video out soon for the vegan California Grill menu review. Make sure you’re subscribed and turn on notifications for our next video upload.