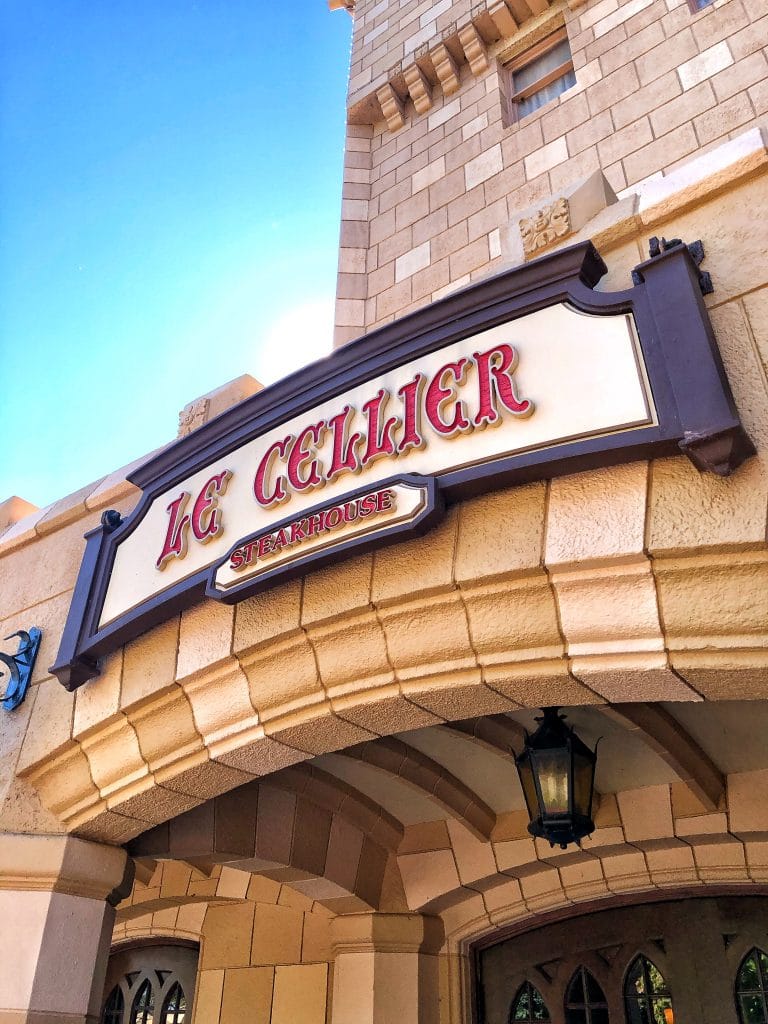 Old school Walt Disney World fans may remember that when Le Cellier first opened, it was actually a buffeteria! I actually never visited the restaurant back then, but once it became a table service dining room, it became one of my family’s favorite spots. Then the Disney Dining Plan came into play and it became a highly sought after “Signature Dining” reservation, so we stopped going as much. However, with all of the vegan options now available, Le Cellier is going back on my list of must-visit dining spots at EPCOT!

I must admit, it had actually been at least 10 years since I’d actually had a meal at Le Cellier. With Disney’s Plant-based initiative at the end of 2019, Le Cellier got some wonderful vegan options, but I had only seen photos up until last night. Very recently, they added one more vegan appetizer option, so I knew my dry spell of Le Cellier had to end. I was not disappointed with any part of our experience last night. I realized we didn’t have a blog post listing all the options, so rather than discuss just the new appetizer, I ordered one of every plant-based option on the Le Cellier menu to share my vegan reviews with you here. We have previously reviewed the Le Cellier vegan brunch offerings, which are not currently taking place. Hopefully brunch will return soon.

Here is the official Walt Disney World Menu, which is currently how you look at the menu, by scanning a QR code in the restaurant, during these pandemic times. Right now, the lunch and dinner menu are the same, as has been happening at most table service locations during the pandemic reopening. We hope to return to unique lunch and dinner options very soon. 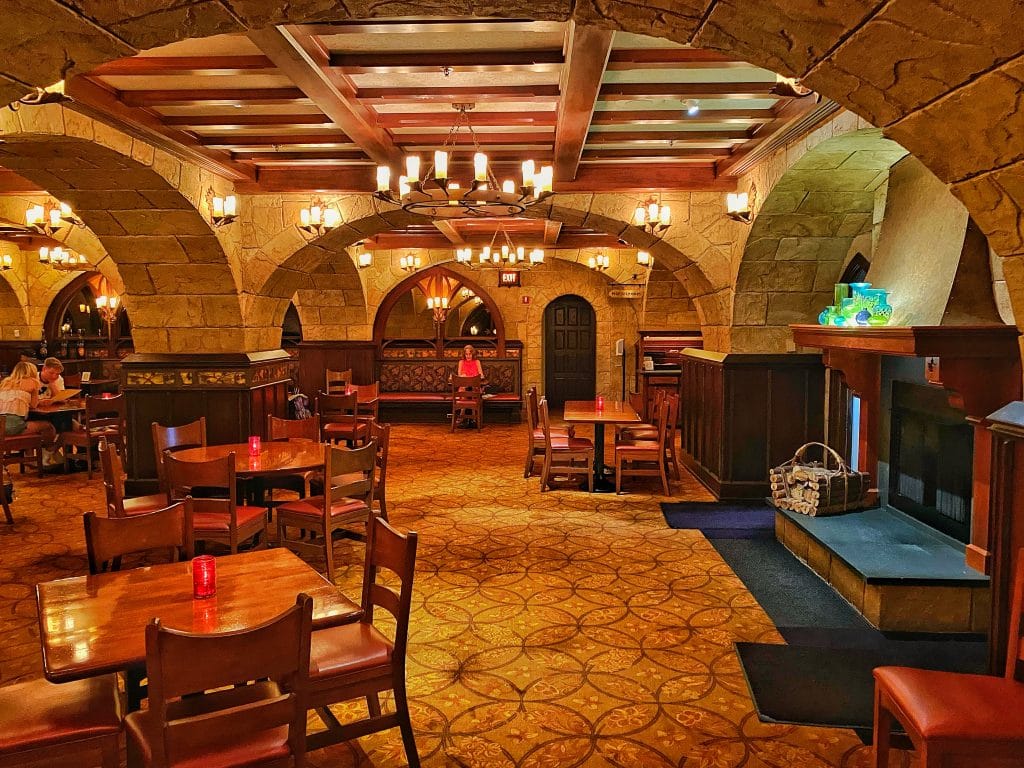 For those not familiar with Le Cellier, it literally means the cellar and is meant to feel like you are dining in a rustic wine cellar. It’s not a huge space, and with physically distanced tables, reservations are still hard to come by but I lucked out with one at 9:25pm, which I was able to modify that same day for 4:25pm.

It’s a perfect date night spot for locals, or a special occasion location for those vacationing during a birthday or anniversary. There are no windows or grand views, but the lighting and low ceilings make for a romantic cozy feel. 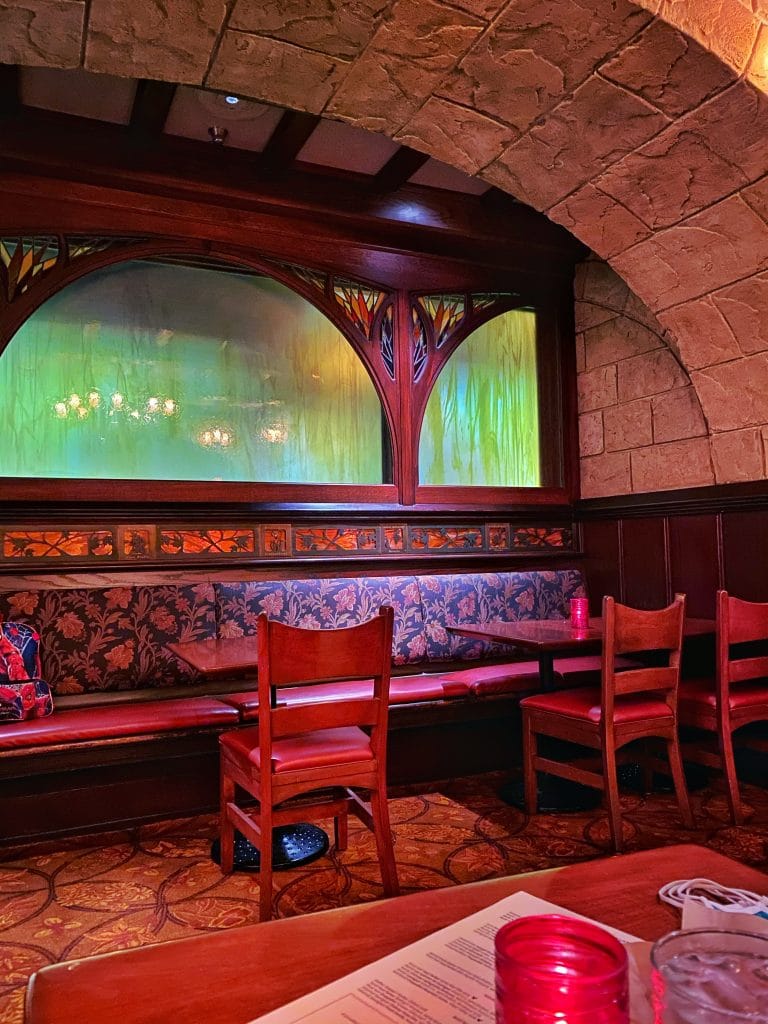 I started with a cocktail, which was as good as it was pretty: 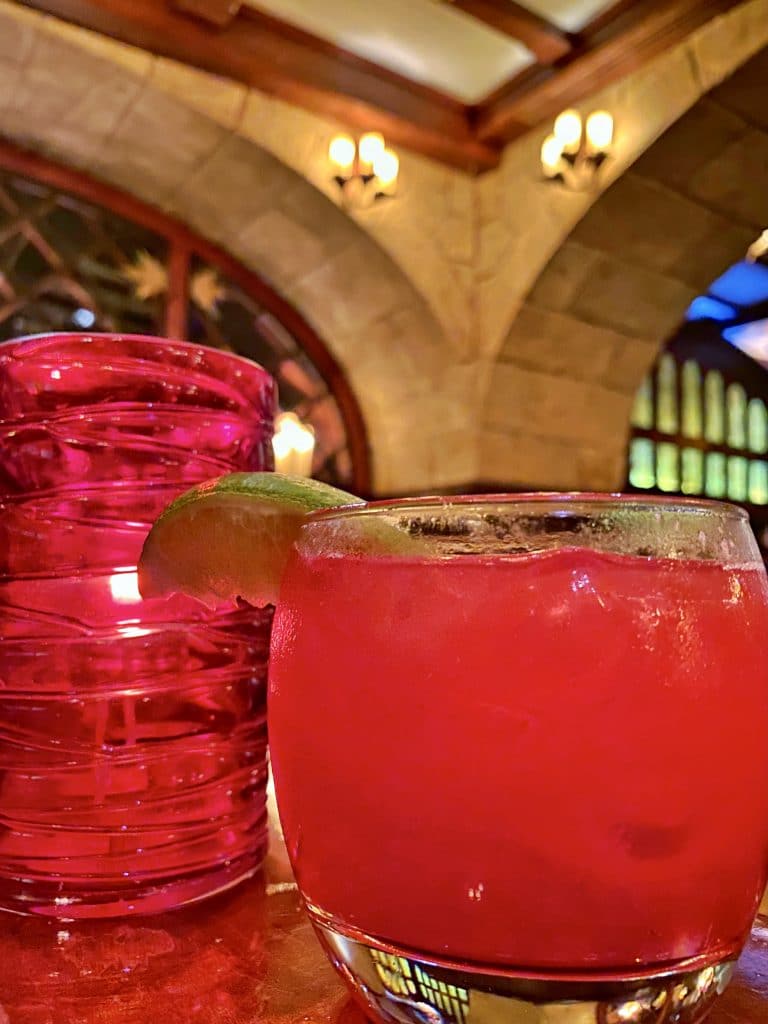 The bread service is completely vegan as is. It comes with a pretzel bread stick, a multigrain roll with sunflower seeds, and a sourdough roll. Normally served with salted butter, just ask and they will bring out some Earth Balance for you. You can ask for more as you’d like, but don’t fill up because there’s more amazing choices coming! 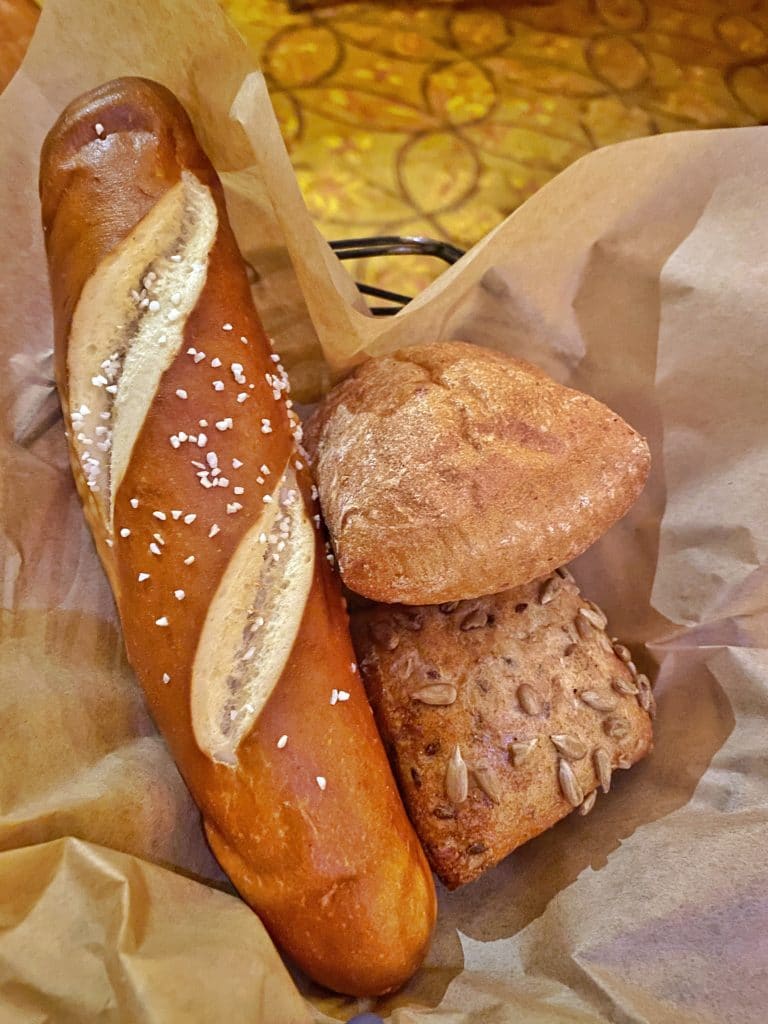 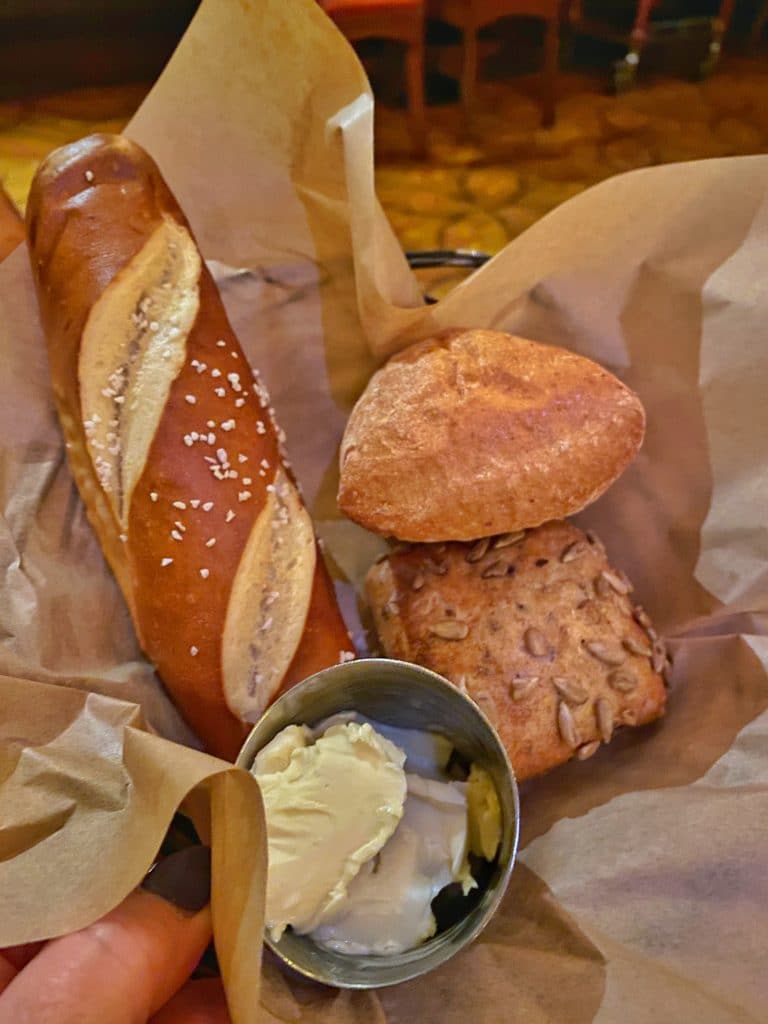 I enjoyed all of the bread types, I don’t think I could pick a favorite!

There are actually quite a few vegan appetizer options, which was nice to see. Options are always a good thing! 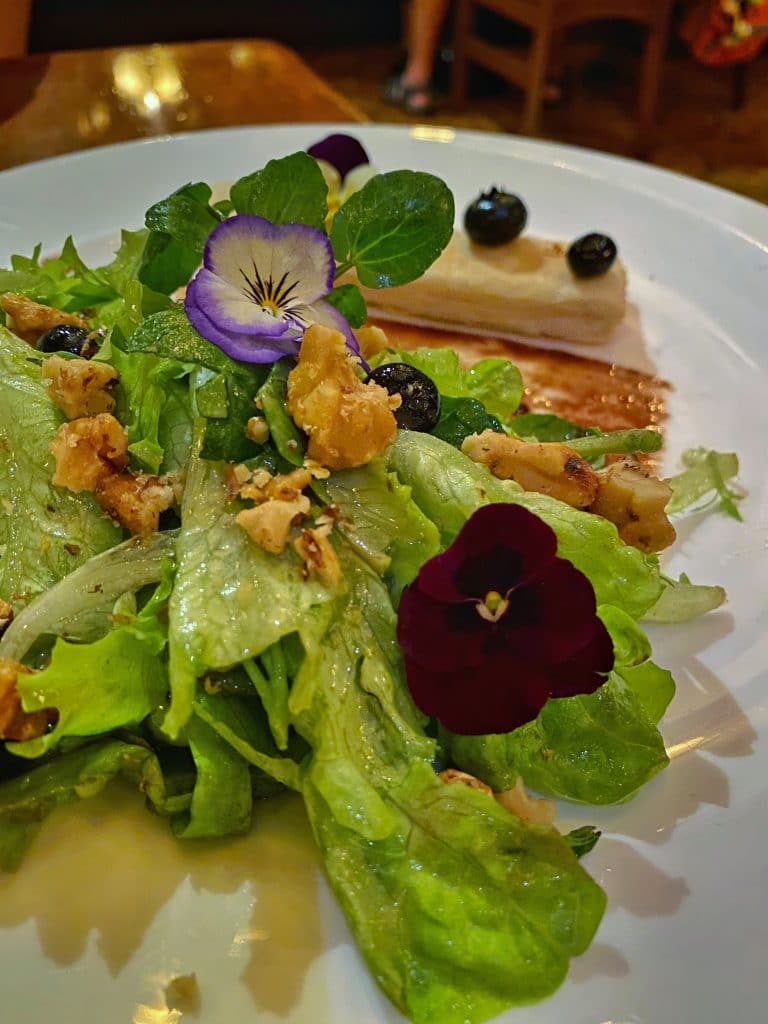 This was a lovely, refreshing salad. I love a good vinaigrette and this did not disappoint. The blueberries and walnuts were a nice change of texture from just lettuce.

The “phyllo crisp” was not actually very crisp, but I think it was just a little undercooked. This is actually Pillsbury phyllo dough, which is accidentally vegan. I’ve used it at home to make a Mushroom Wellington.

There are also edible flowers which make it just pretty and Spring-y. It was also a good size salad, which is nice considering the price tag. 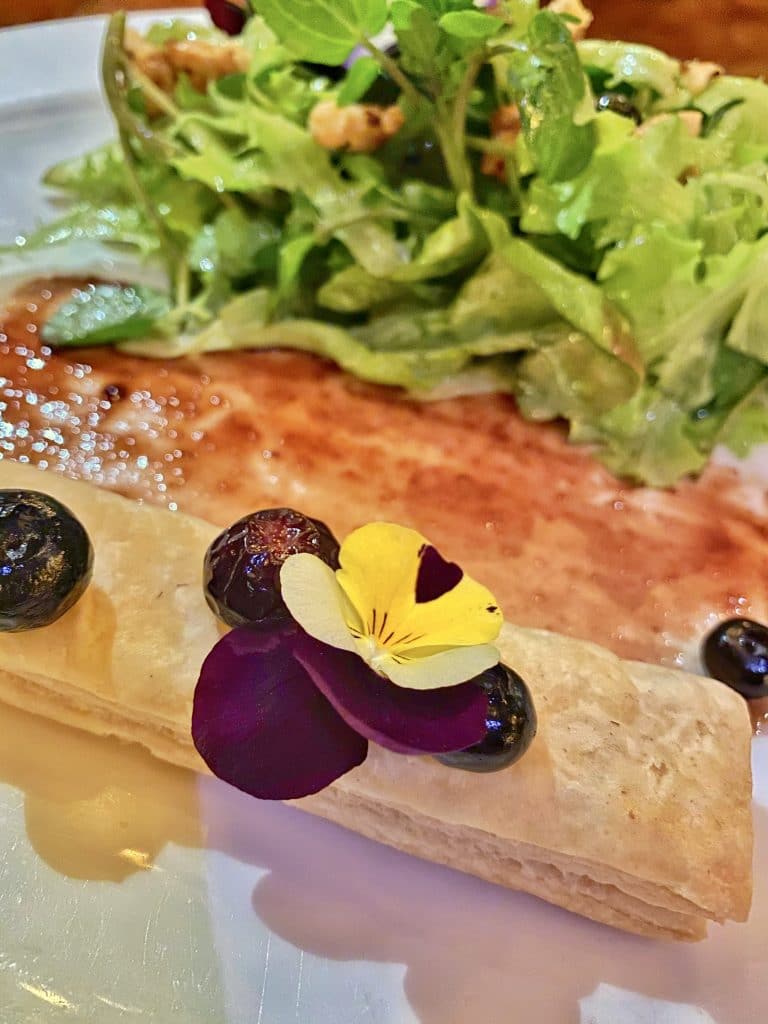 Street Corn, Avocado Crema and Cheese Shreds
Again, this was the reason I booked this reservation, and it did not disappoint. Prior to closing for the pandemic, Le Cellier had made their own blend of chorizo, along with other cured meats for their charcuterie platter. They no longer make a chorizo, so they decided to use the spice blend to create these vegan meatballs using Impossible brand meat. As always seems to be when non-vegans try Impossible meat, no one in the kitchen could believe it was plant-based. 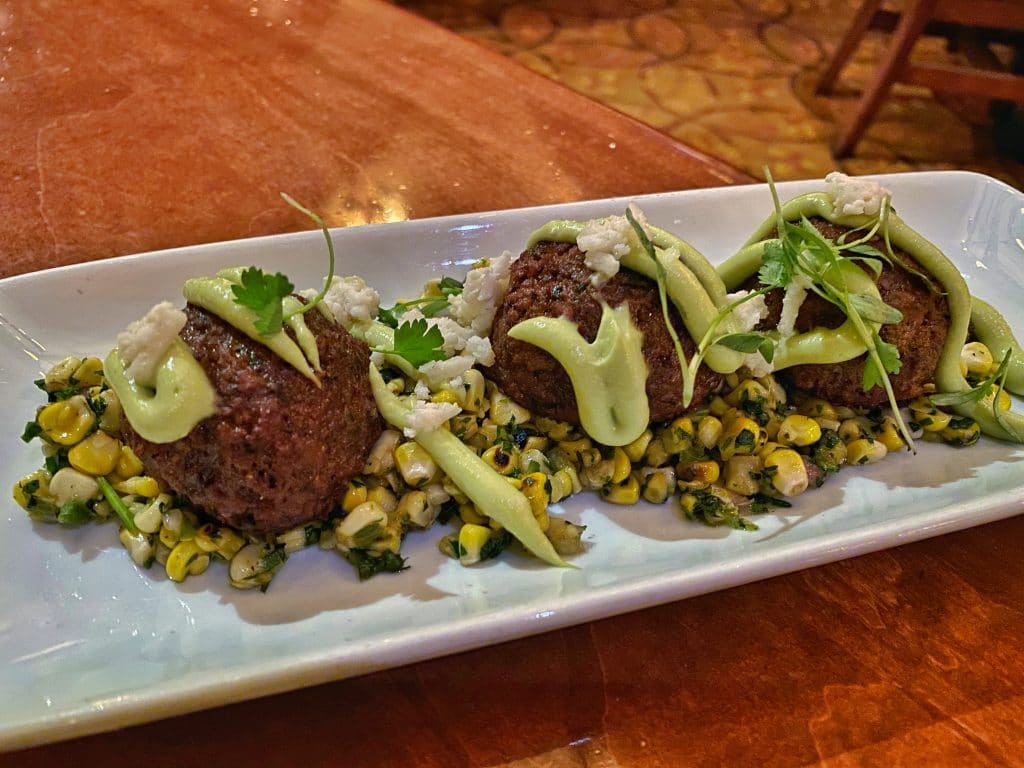 It reminded me of the Farmhouse Meatball wrap that I loved so much at past Flower and Garden Festivals, which is not here this year. The seasonings are a little different and the meatballs are pretty big. They are served on a bed of “street corn” with cilantro and other seasonings, which was delicious. Topped with an avocado vegan crema and vegan cheese shreds, it was a satisfying option for sure. This dish is also gluten-free as is. 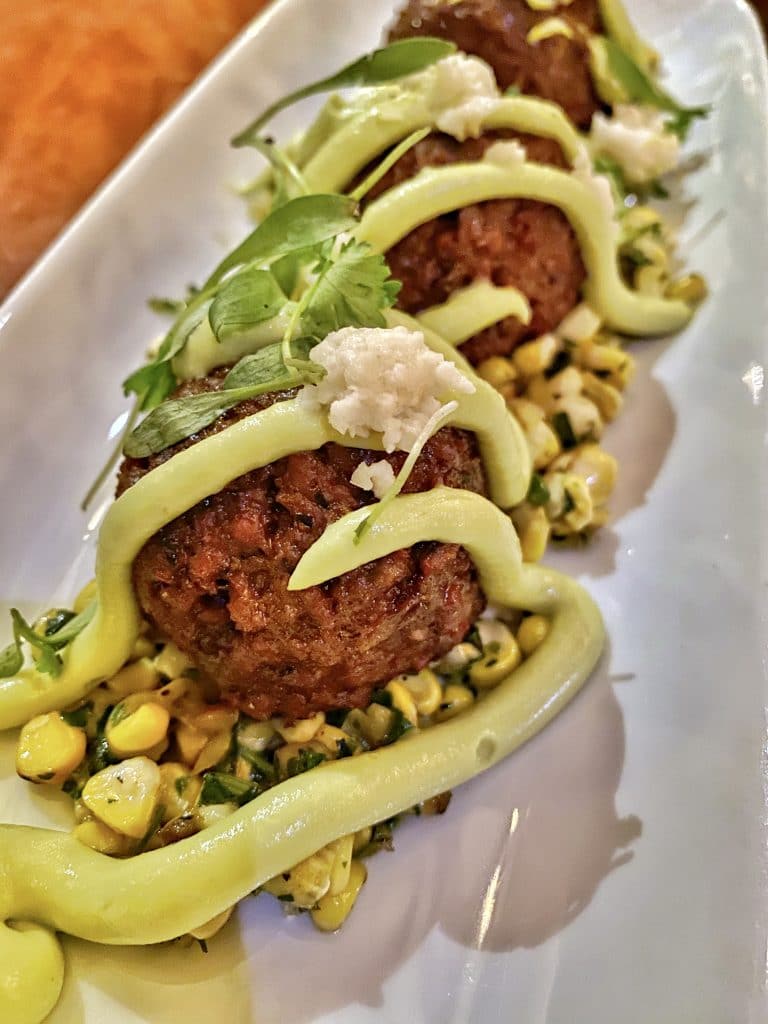 If the Seasonal Salad is not your thing, you are also able to modify the Wedge Salad to remove the bacon,  blue cheese, and ranch. We did not try this but it’s great to have two salad options.

Fresh-cut French Fries, Canadian Cheddar, Truffle, Red Wine Reduction
Although it’s not on the menu, there is also a vegan Poutine option, made with tofu and vegan cheese shreds, and a vegan version of the delicious red wine reduction gravy. The gravy is brought out in a little container and partially poured on by the server. It’s piping hot, I took a million photos and was shocked the gravy was still hot when I took a bite of the fries. 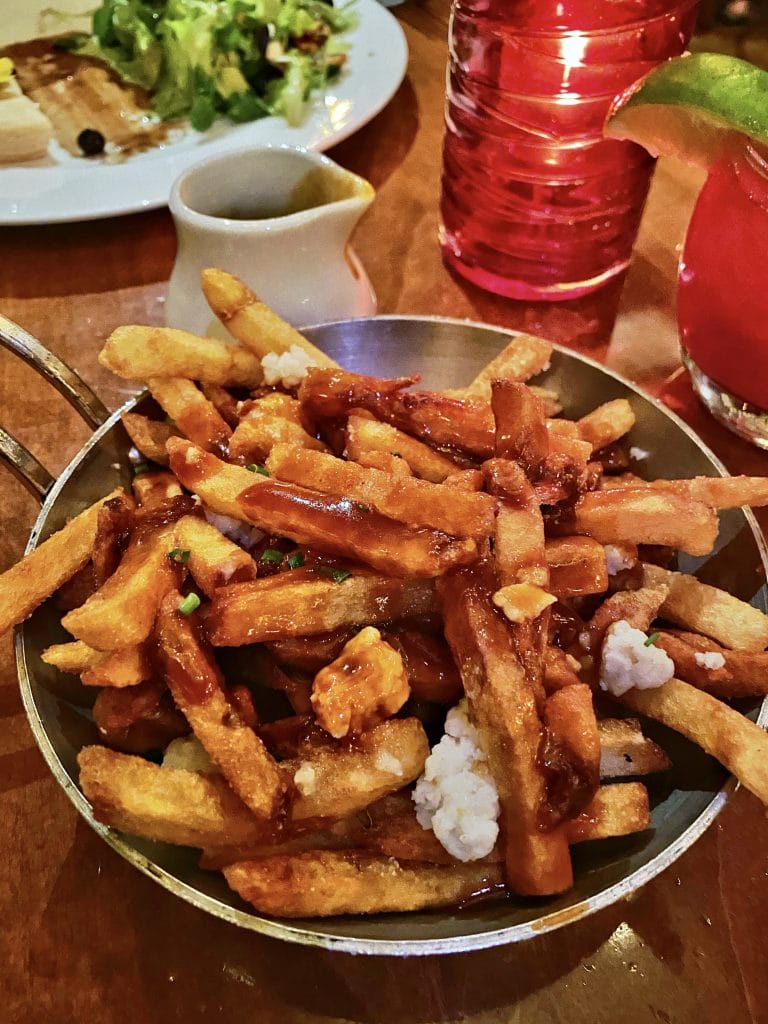 I really enjoyed this and it was my first time actually having poutine (I can’t count the Italian Sausage Poutine at Flower & Garden because it’s not really what poutine is.) The super hot gravy melted the cheese, and the chunks of tofu cheese to simulate cheese curds was really good too, not bland at all. The gravy was a little salty, but that’s how gravy on fries should be I think. I would definitely order this again. Also gluten-free as is. 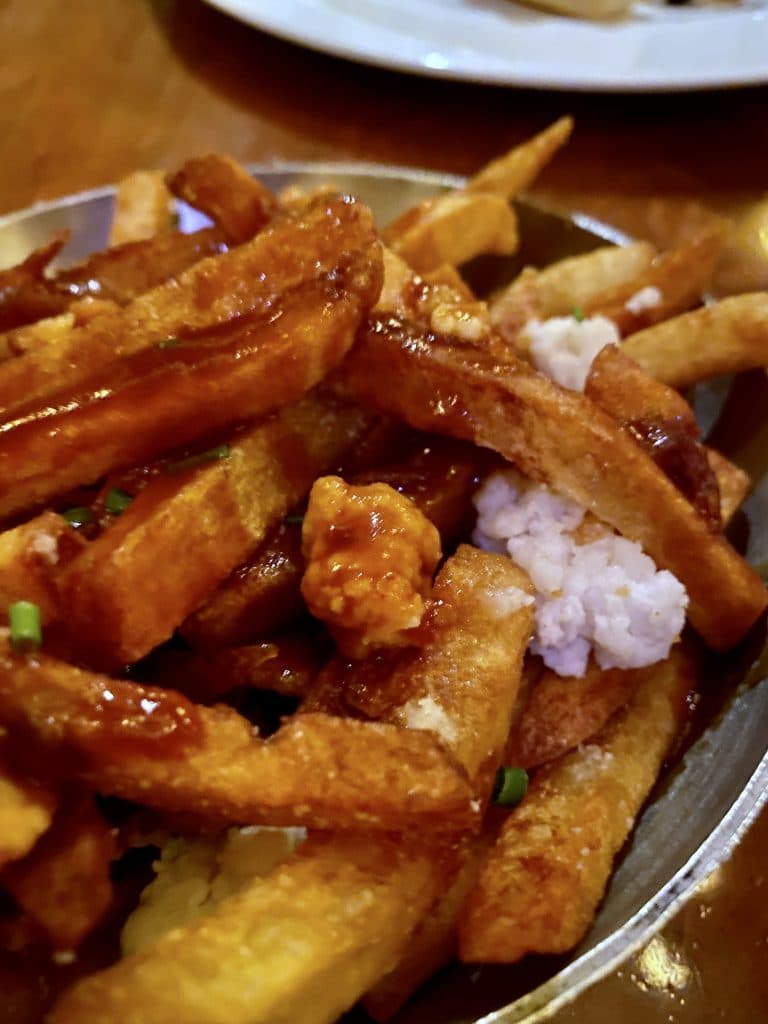 There is only one vegan entrée, as is the norm at every table service restaurant. Here at Le Cellier, it is the plant-based Steamed Asian Impossible Dumplings: 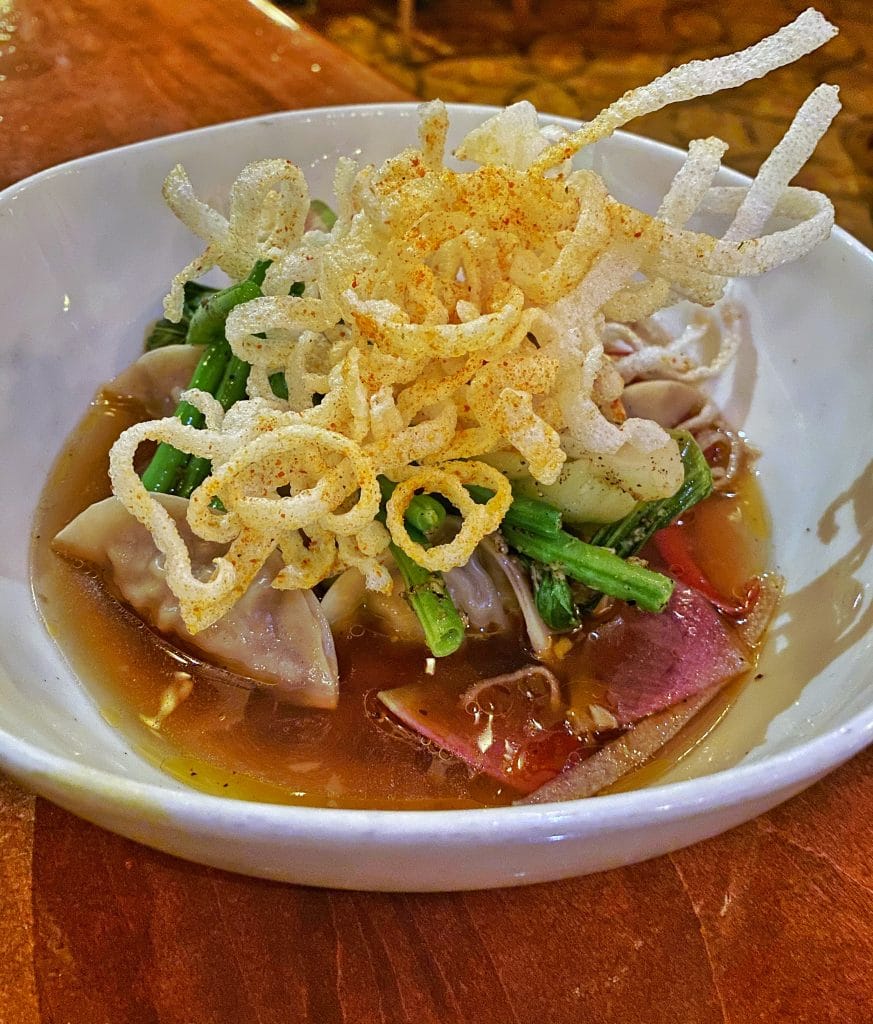 This was a delightful and unique entrée option. It is basically the same Impossible meat inside wonton dumplings, but with different seasonings of course. 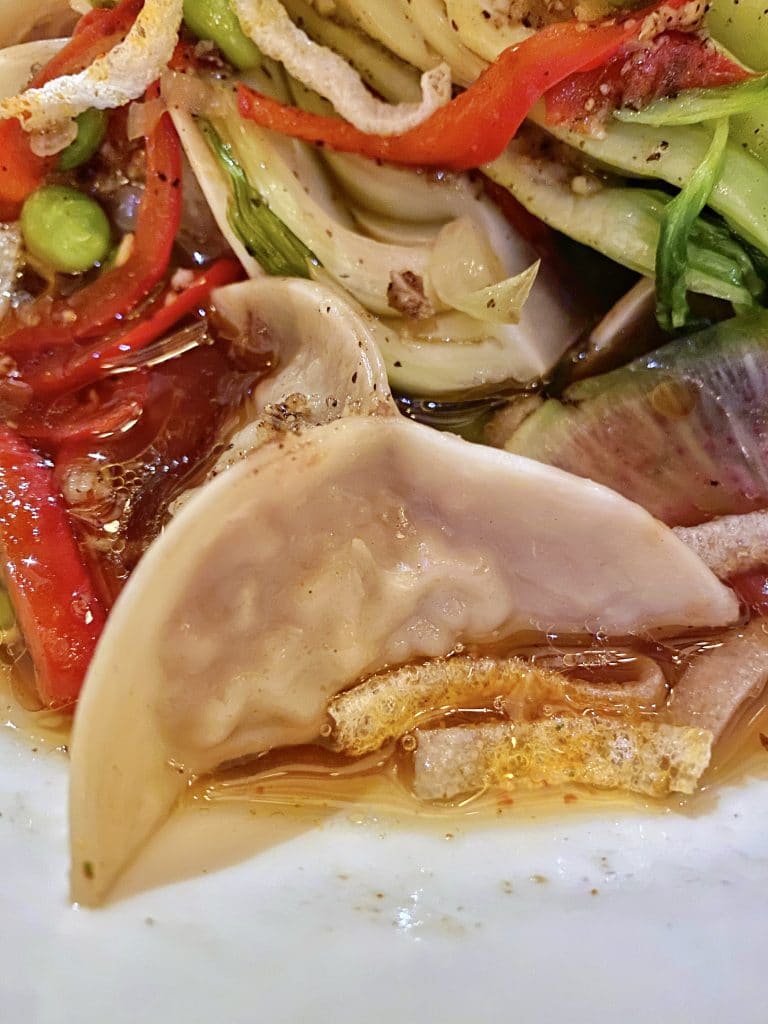 The meat itself wasn’t too seasoned, and the dish really got it’s flavor from the broth, which had a nice Asian spice/lemongrass taste. 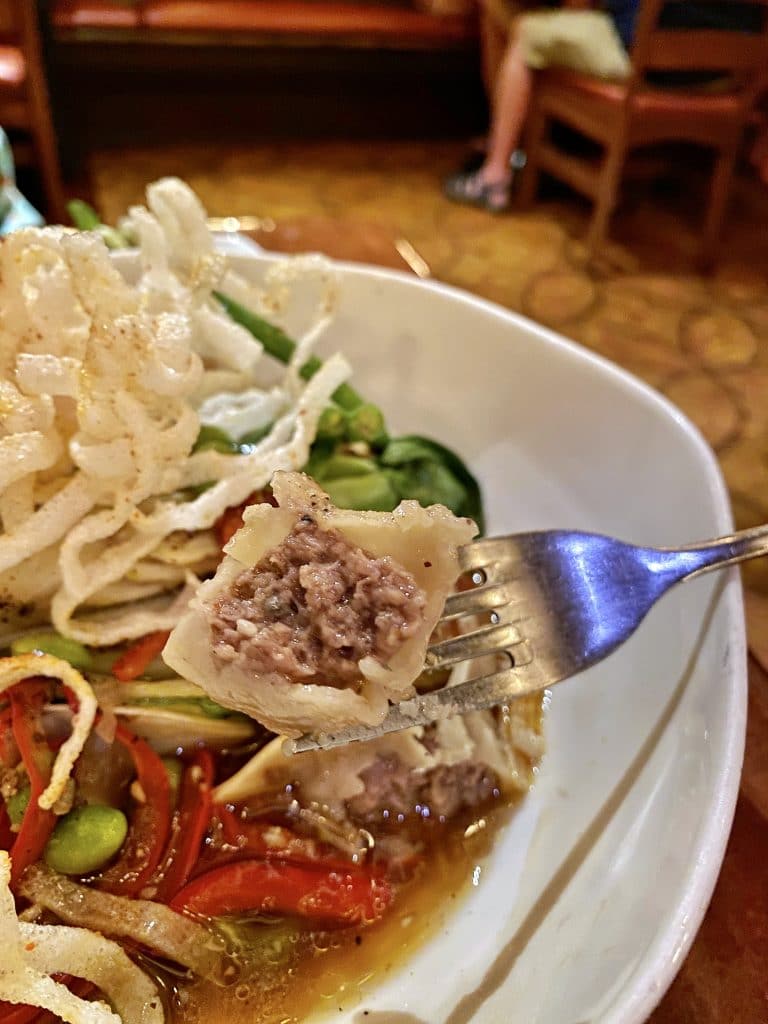 You are served five dumplings in the dish, with a large chunk of bok choy, some long beans, red peppers, edamame beans, and watermelon radish. 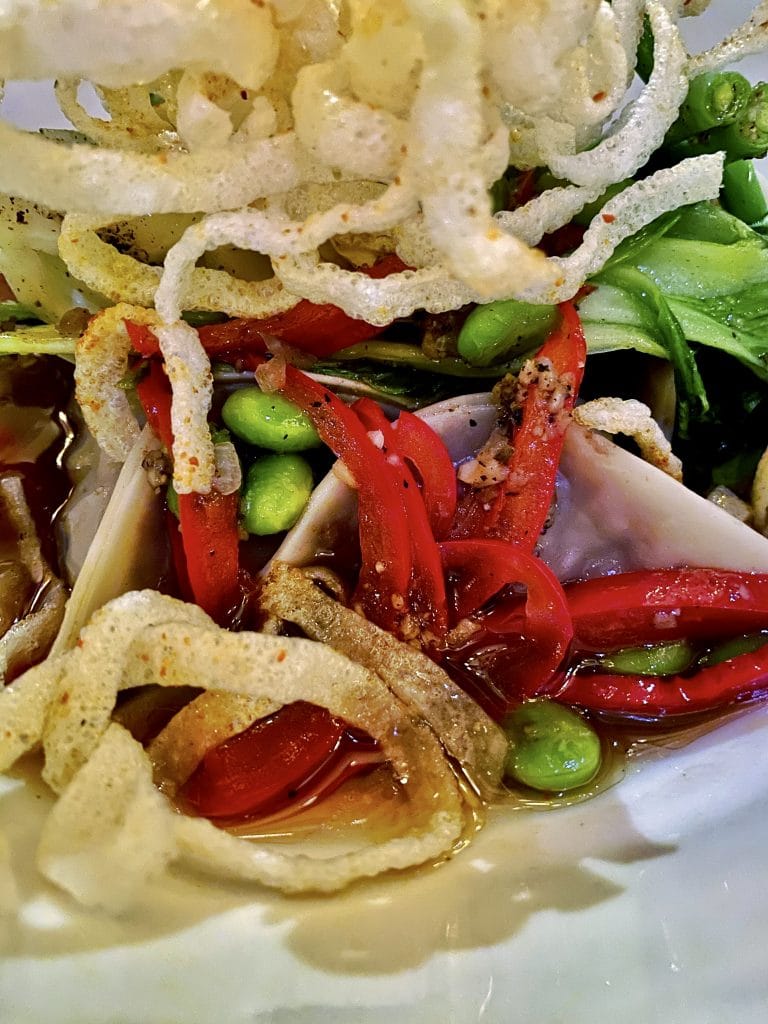 The dish is then topped with crispy rice noodles coated in Asian spices which offer a little kick. Not enough to classify the dish as spicy by any means. If the spices are too much for you, just avoid the crispy noodles, they don’t really add to the dish. 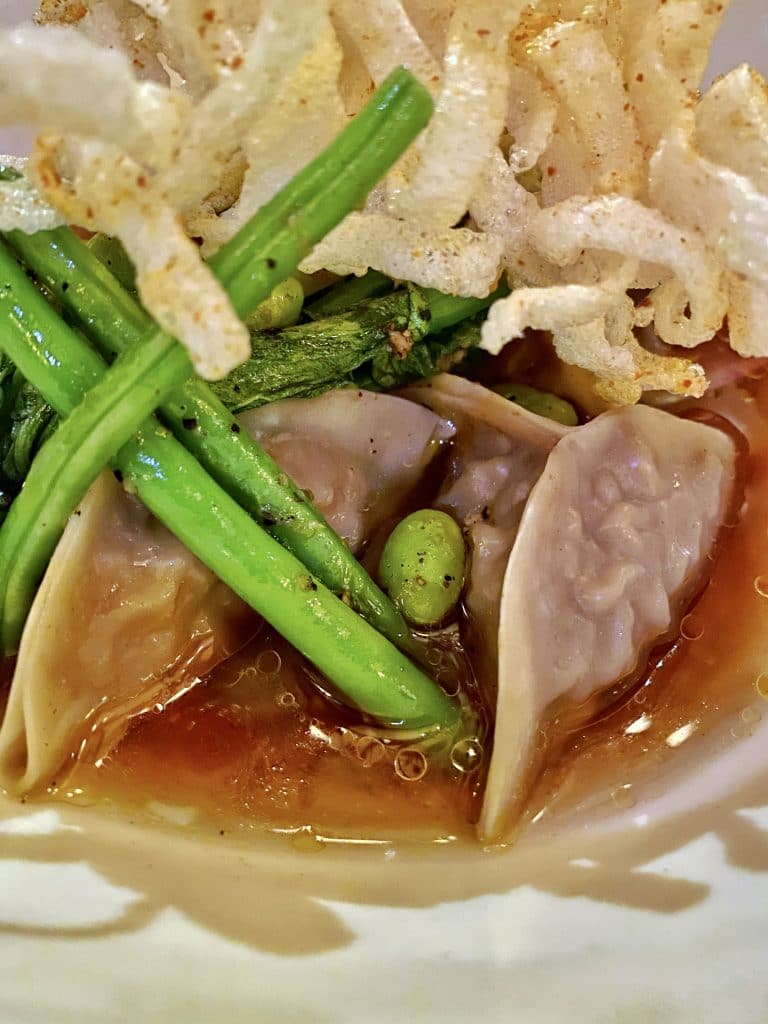 The dumplings themselves were a little doughy in my opinion, but not enough to make me not enjoy the entrée. Overall, I really enjoyed the flavors and textures here, but as I’ll go into below, if I returned, I’d probably get appetizers and sides and be completely happy with my order.

While most of the enhancements contain cheese, one does not and it is definitely worth getting. 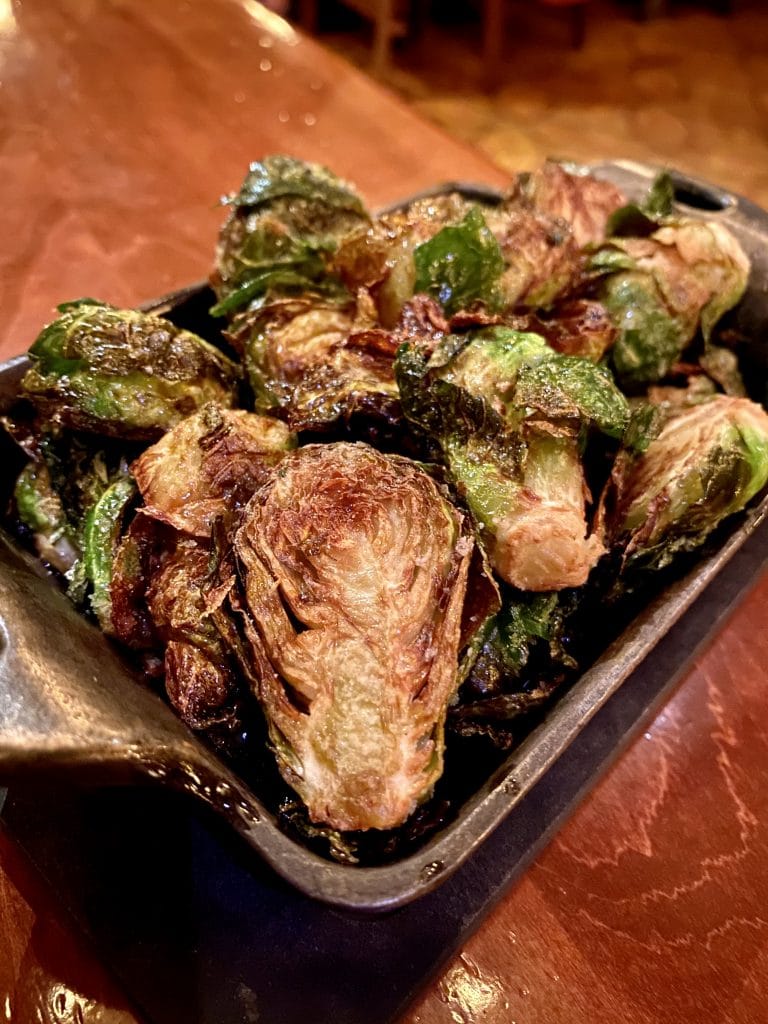 These were without a doubt the best Brussels sprouts I have ever had in my life. I would go back just to order these. They were full of such amazing flavor. Lightly fried, and coated in a Whiskey/maple syrup sauce, they are a must-order if you like Brussels sprouts. I didn’t feel like they even tasted like Whiskey, just amazing seasoning and a sweet/salty flavor. So, so good. I need to try and recreate these at home, if they come out good, I’ll share the recipe! 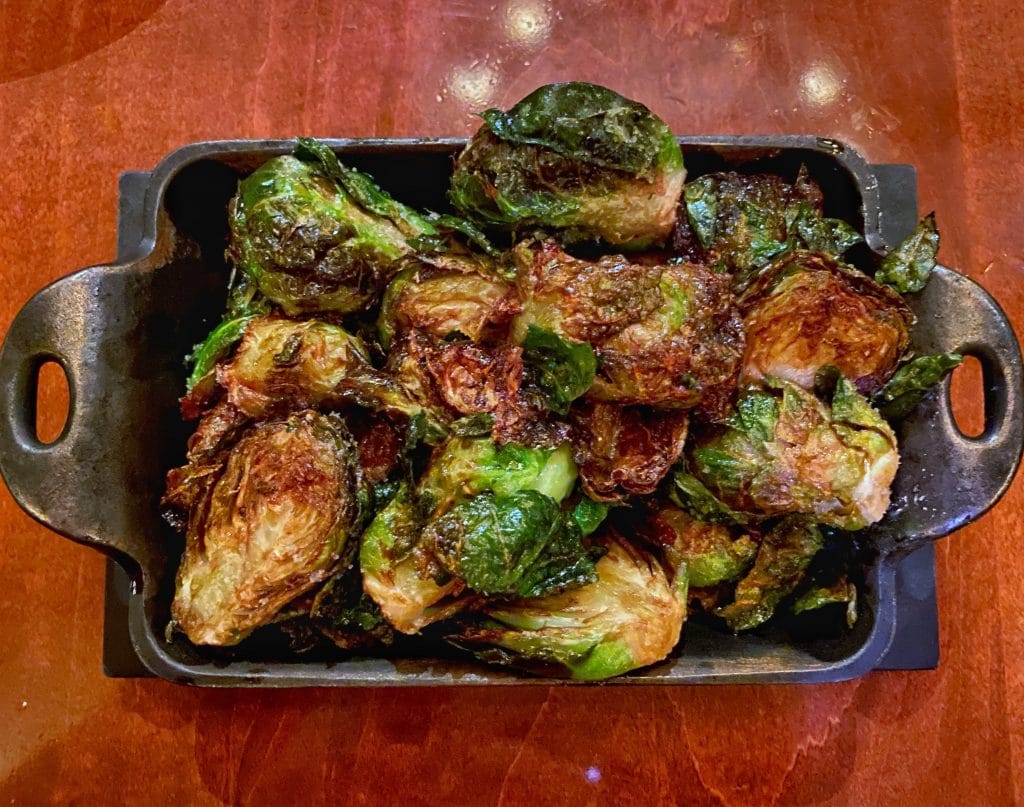 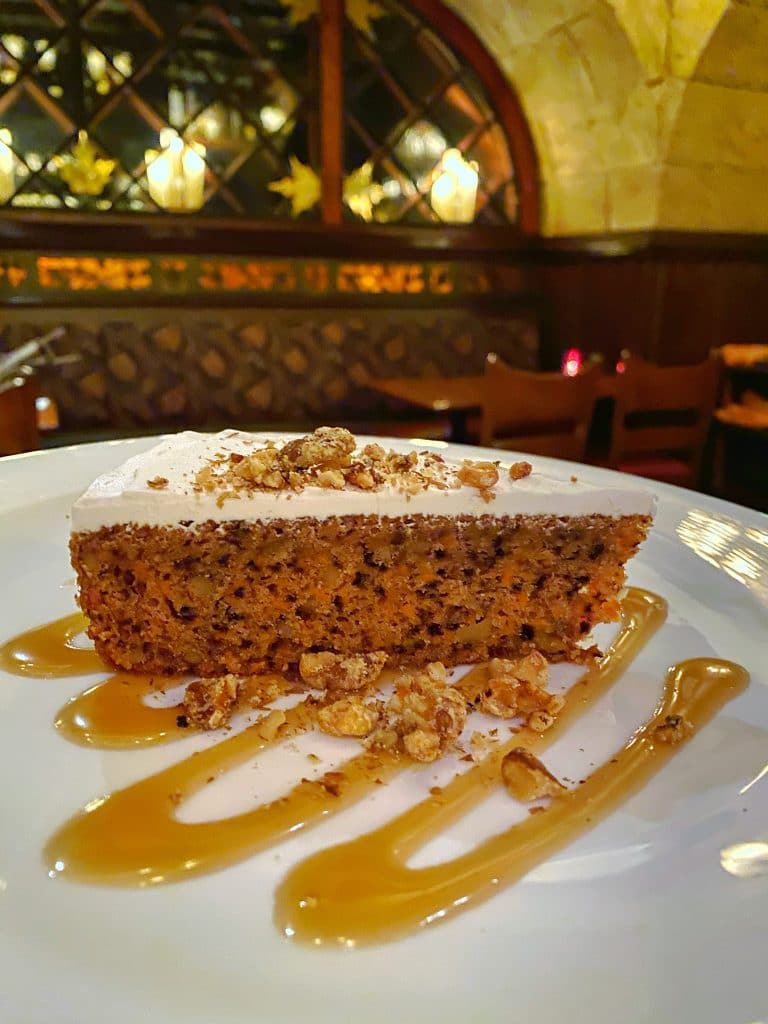 This was a lovely ending to the meal. Not overly sweet, a very nutty flavor due to all the walnuts in the cake itself. The cake features walnuts, shredded carrots, and the cake, no raisins or anything. The frosting is made with Daiya brand vegan cream cheese and again not overly sweet. The plate is drizzled with caramel, which is a nice touch of sweetness to dip your forkful in. 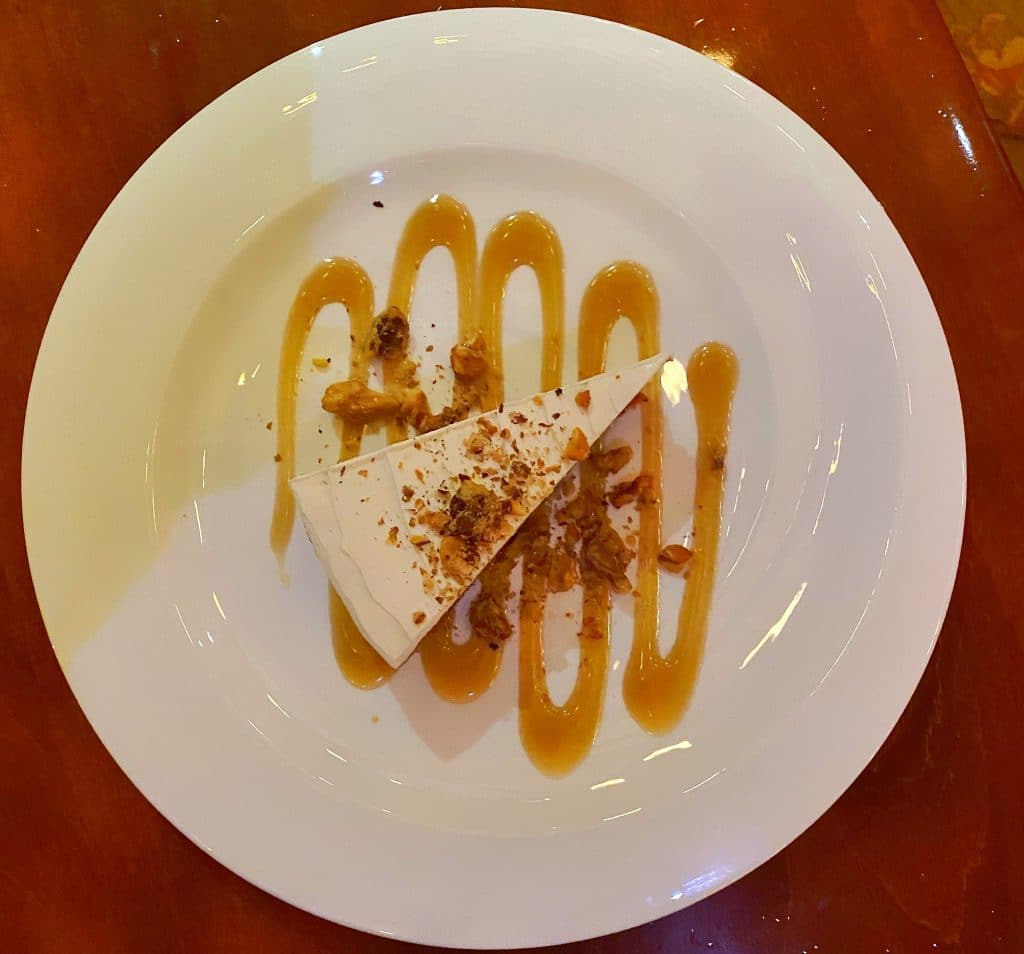 All in all, this was an amazing all-vegan meal that my husband and I actually shared. If I were to recommend a plan, I’d definitely order the vegan chorizo meatballs, the poutine, and the Brussels sprouts and call it a day. But really, I loved everything and if it were a special occasion, I’d probably order everything again. I really can’t stop thinking about the meatballs and the Brussels sprouts though!
Don’t forget that before or after your meal is a great time to look for Epcot bunnies out in the Victoria Gardens outside Le Cellier! The grounds here are beautiful and not to be overlooked. 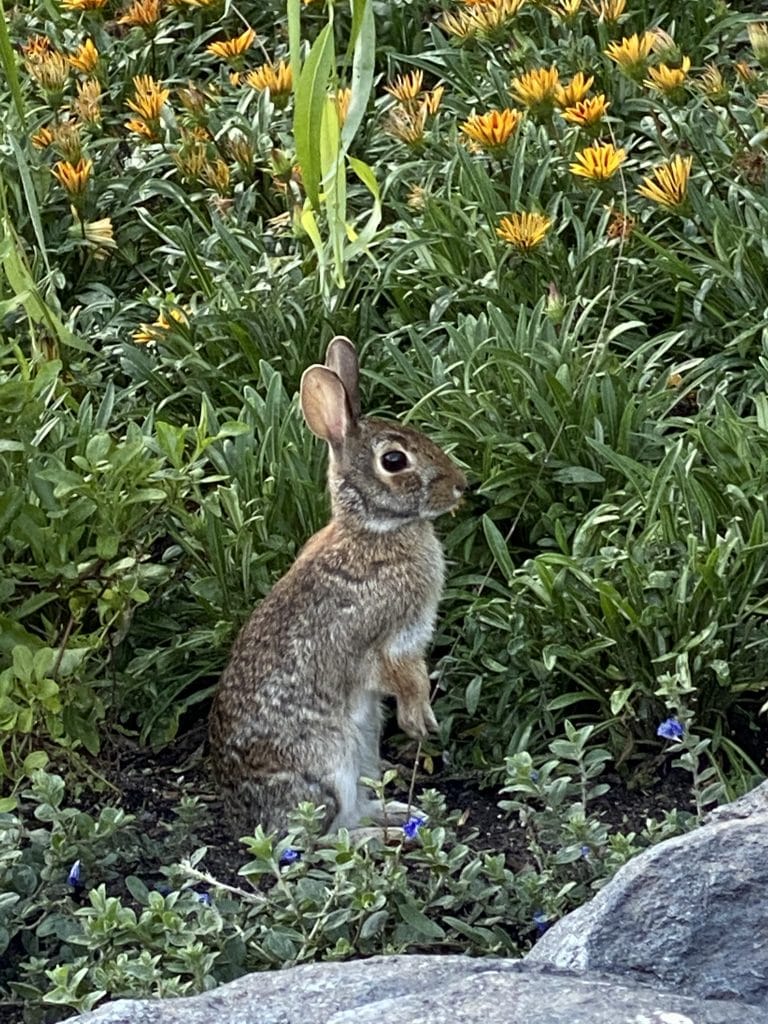 Have you dined at Le Cellier and enjoyed any of these vegan options? Let us know in the comments, or be sure to tag us in your #VeganDisneyFood photos on Instagram and we may share them!

I wanted to mention pricing a bit. So the total for everything we ordered above was $115 before tax and tip. That’s with one alcoholic beverage and one entree. But we did get 3 appetizers and a side item. It is pricey, but as mentioned above, this is a “signature dining” spot, and truly, the food was all amazing quality. I felt much better about the cost of everything here than I did at La Hacienda where they offer no discounts except for DVC. I will say I think the entrée should be about $10 cheaper, but maybe that’s just me. Next time, I would definitely just get the meatballs, the poutine, and the Brussels sprouts, but again, that could just be me (and the fact that I’m still thinking about those 3 items). If you want a complete entrée, I think 5 dumplings is still a good size. I just wanted to address it. It is still a much better price than the meat-based entrees offered at Le Cellier.

For a list of ALL the vegan items available at the Epcot theme park reference our comprehensive guide here: What’s Vegan in Epcot?