We checked out the vegan options at the brand new brunch being offered at Le Cellier Steakhouse in Epcot’s Canada pavilion. Here’s our review. 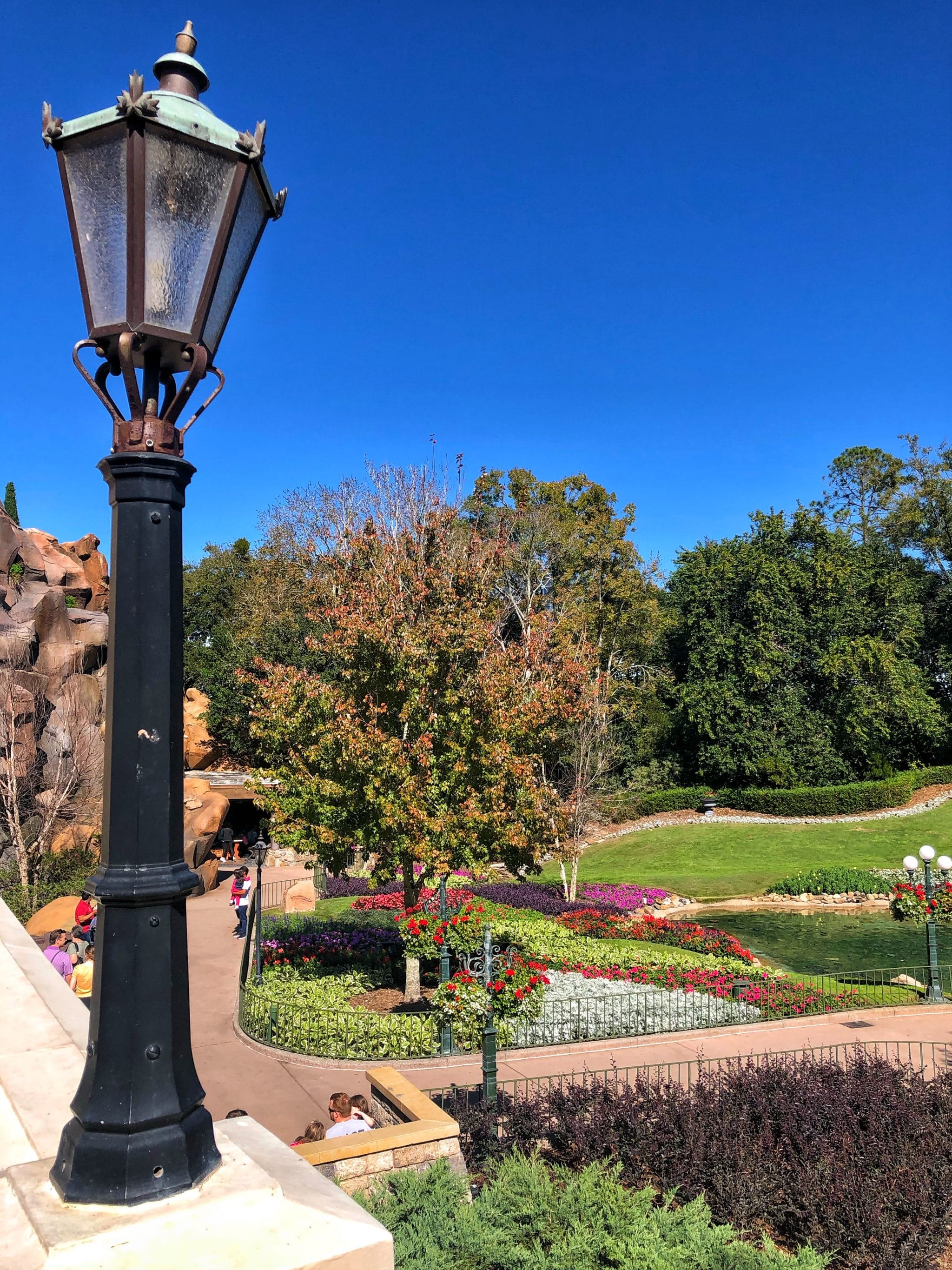 As part of the 2020 Epcot International Festival of the Arts, a brand new brunch experience has been launched inside the Le Cellier Steakhouse at the Canada pavilion in Epcot.

You can find Canada on the World Showcase promenade adjacent to Epcot’s UK pavilion.

The restaurant is nestled into the rock work which can be reached by following the beautiful flower lined sidewalk through Canada’s Victoria Gardens. 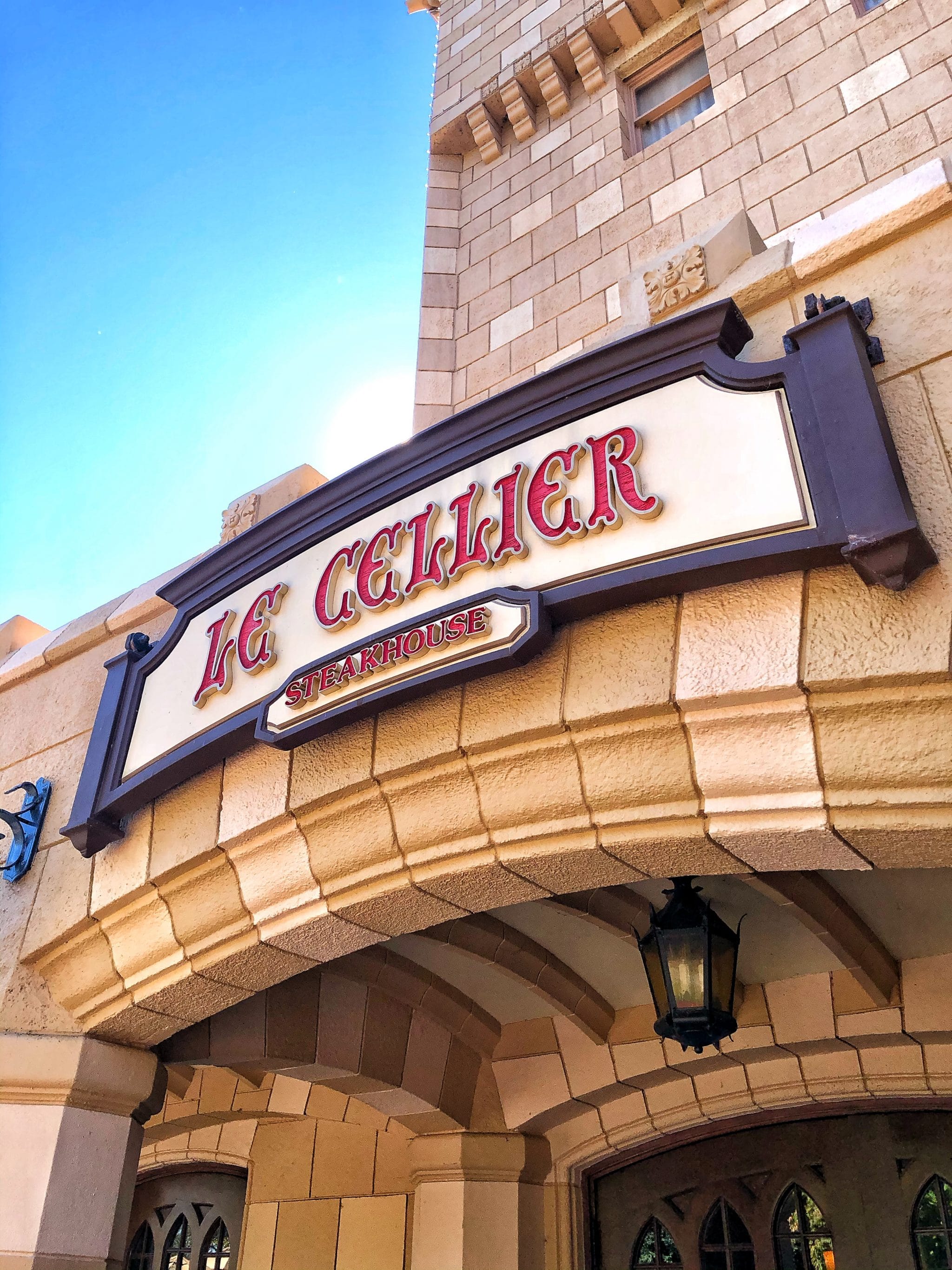 Le Cellier Steakhouse is just that, a cozy cellar built underneath the Château that towers directly above it. 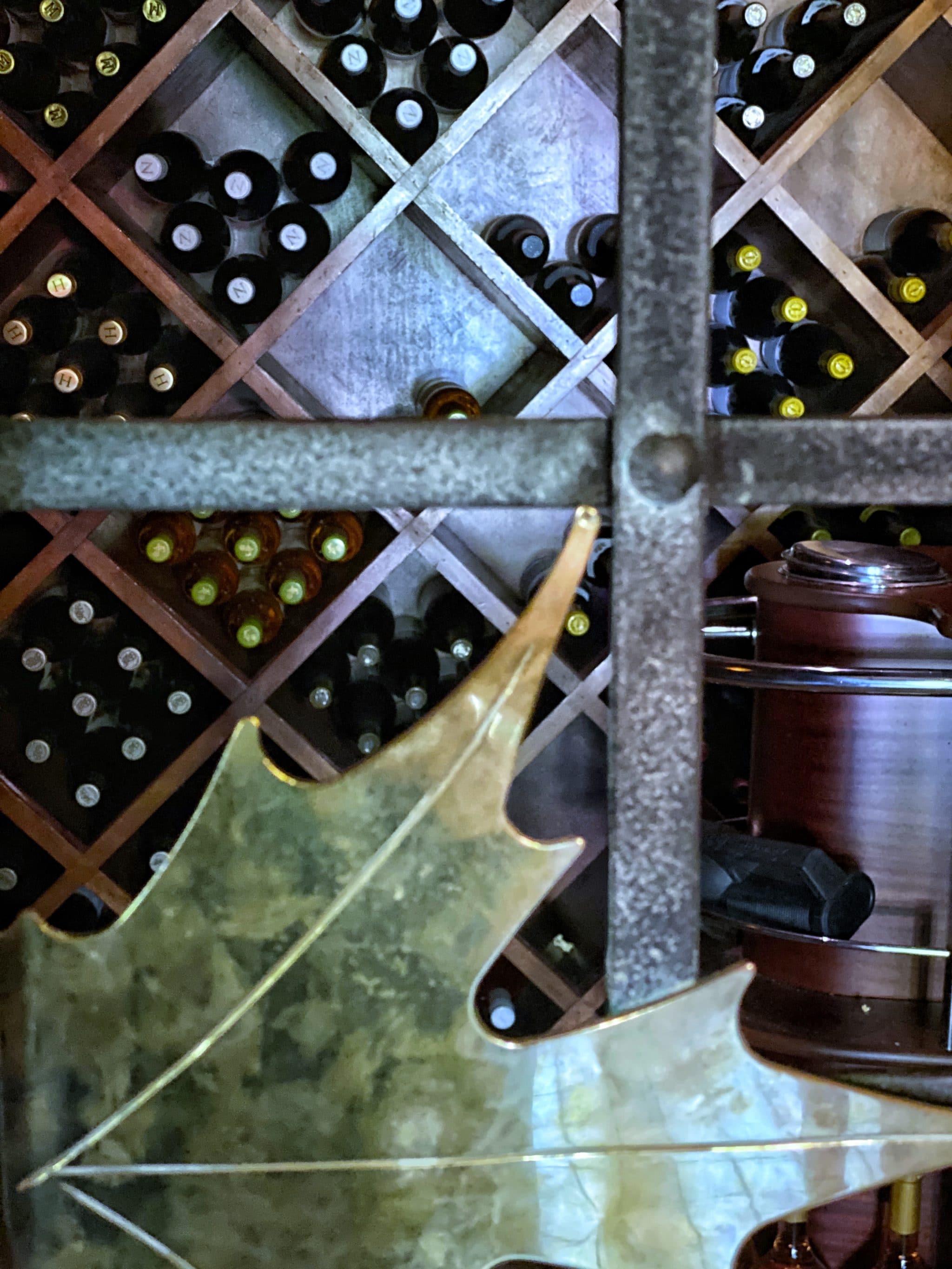 The dining Room is rather small and dimly lit. It’s decorated with intricate carpeting and wrought iron candle chandeliers. 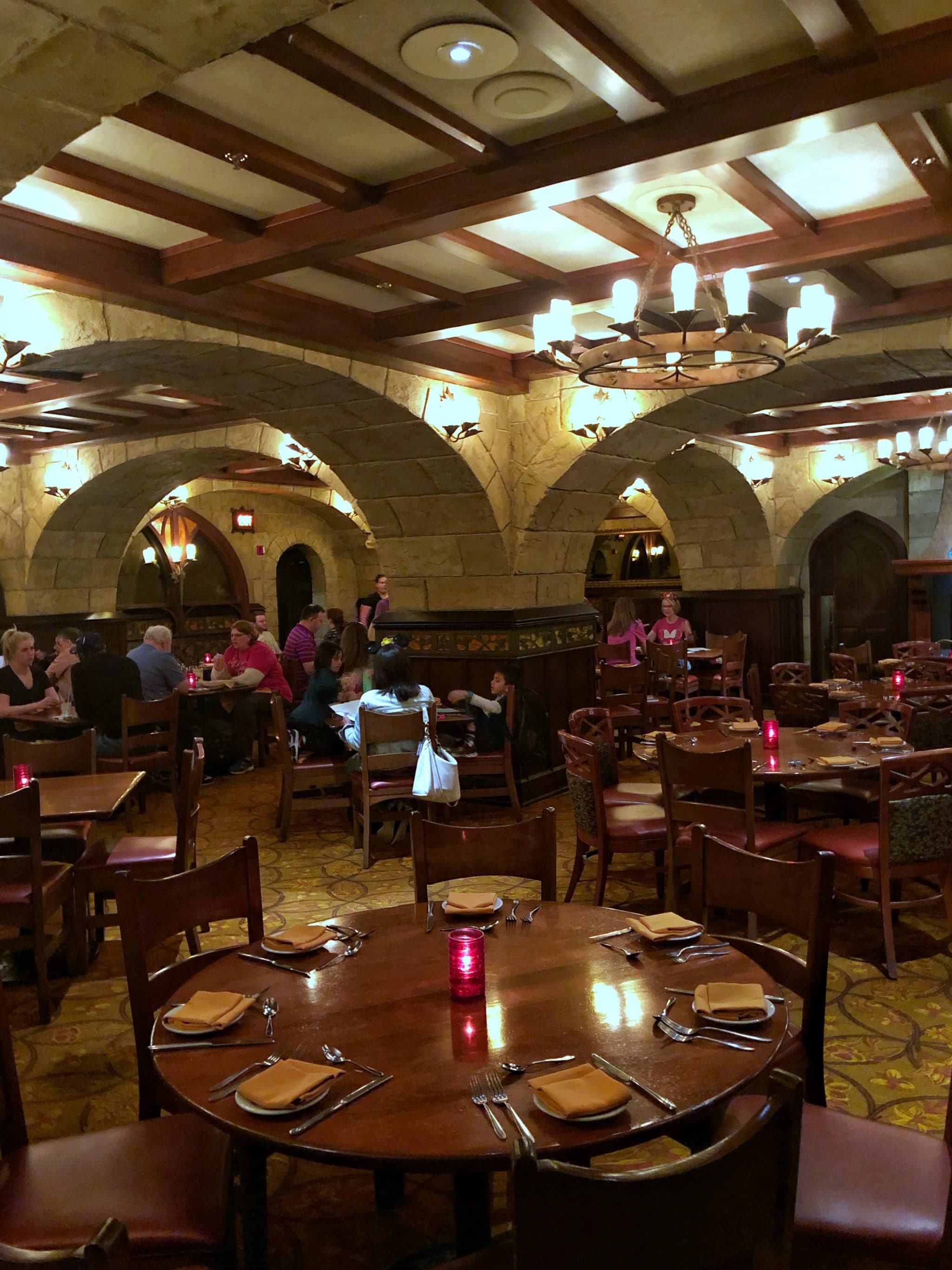 Wooden beams accentuate the ceiling as large stone archways lead guests into the nooks and crannies of the room. Dark wooden tables and chairs with inlaid tapestry fill the space. 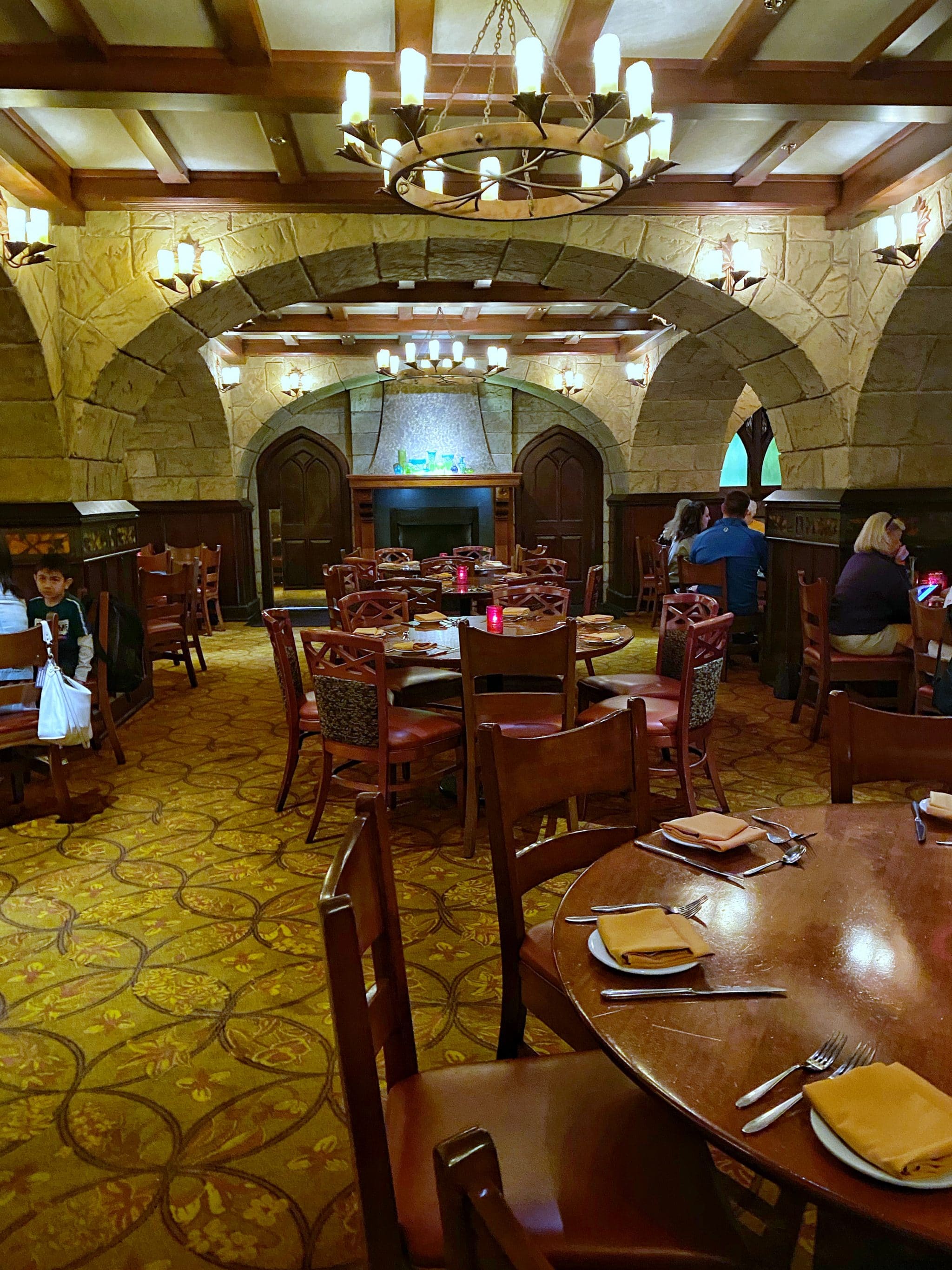 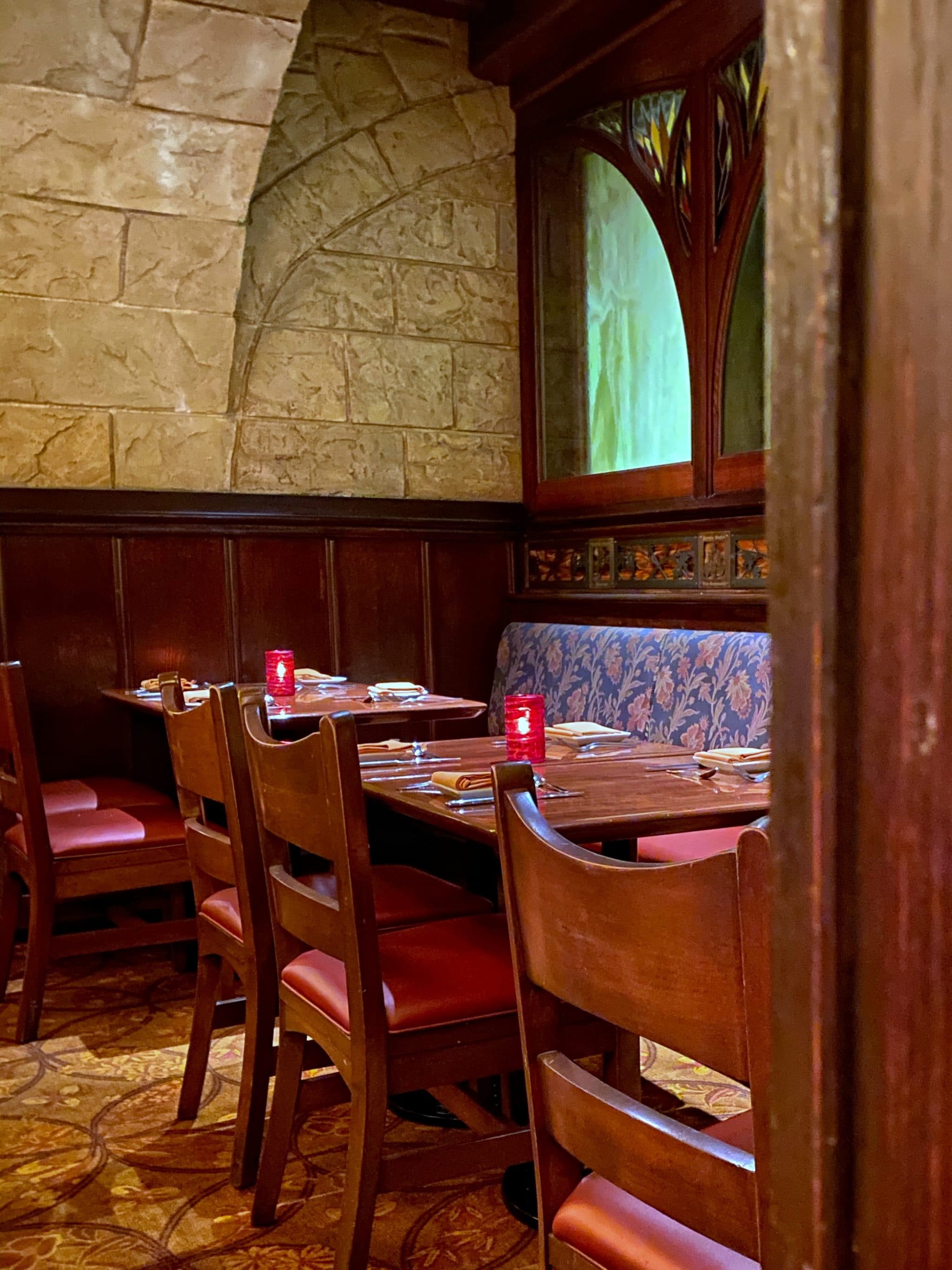 Banquettes line the perimeter of the dining room with beautiful stained glass accents. 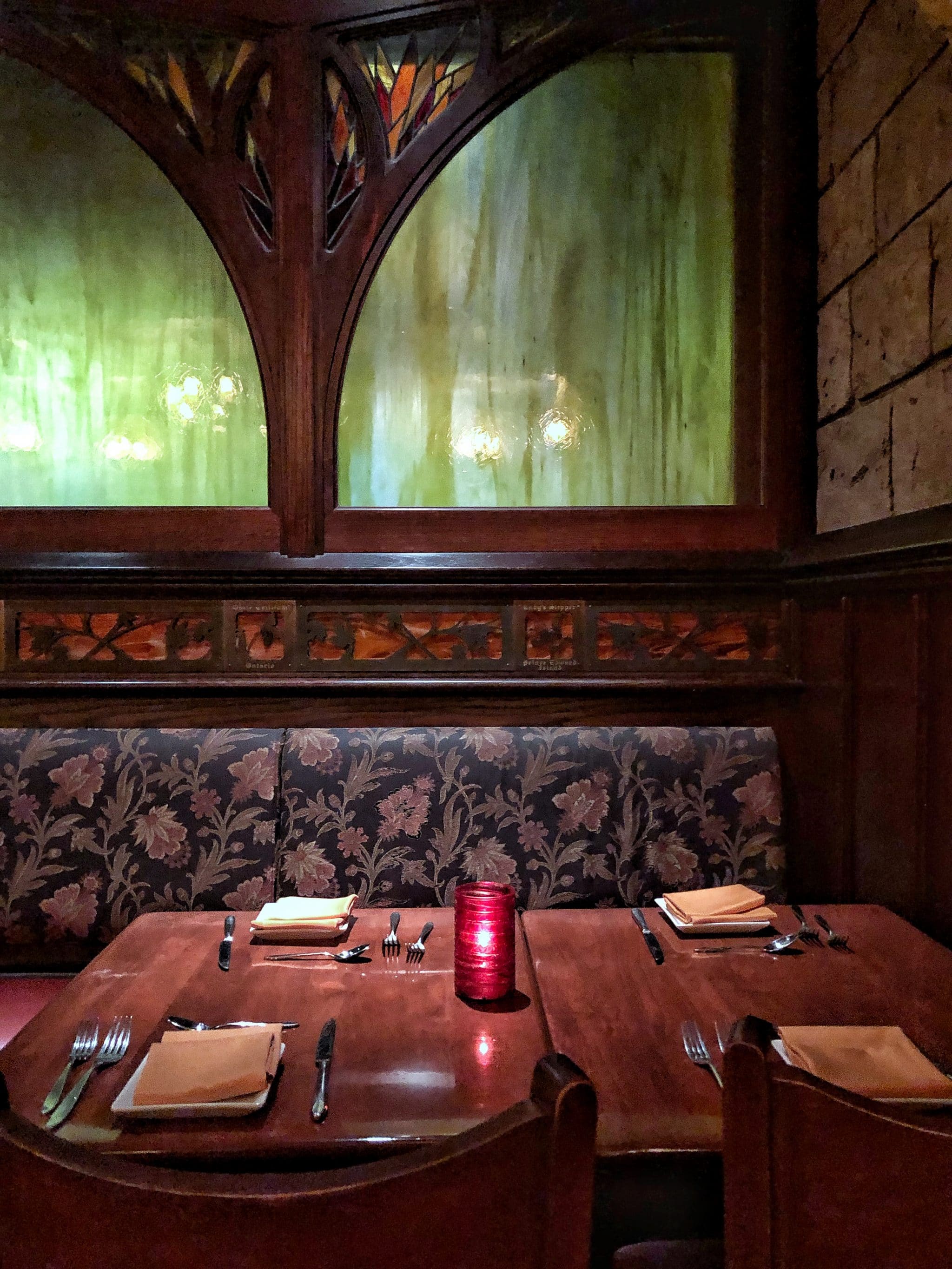 Brunch at Le Cellier Steakhouse is prix fixe. This means that all guests pay a set amount, $67 per person plus tax and gratuity, for four courses. 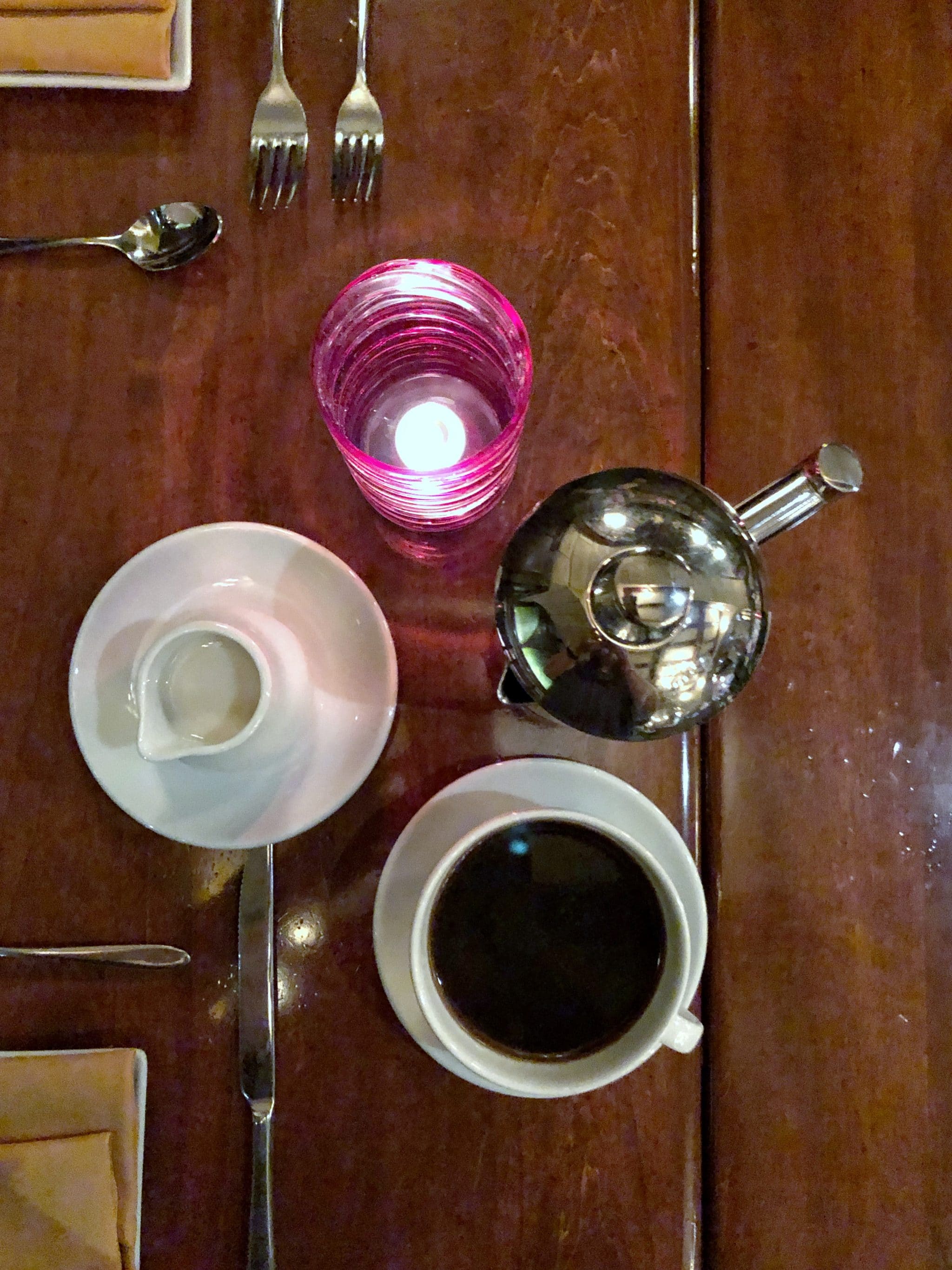 The Pressed Pot Coffee comes with soy milk upon request. 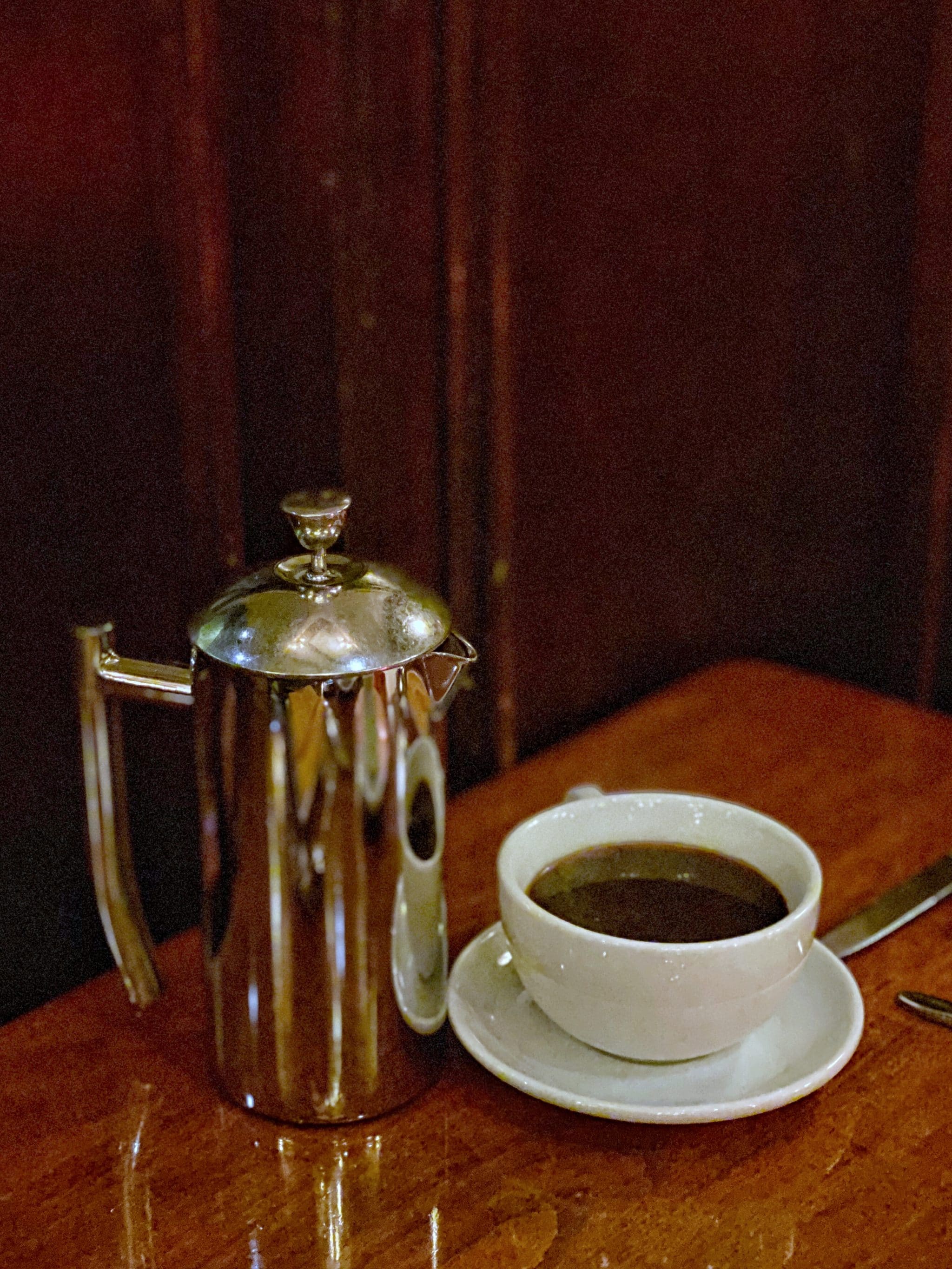 This is the Vancouver 75. It’s a non-alcoholic cocktail which is a blend of Sprite, peach purée, fresh squeezed lime juice and grenadine. 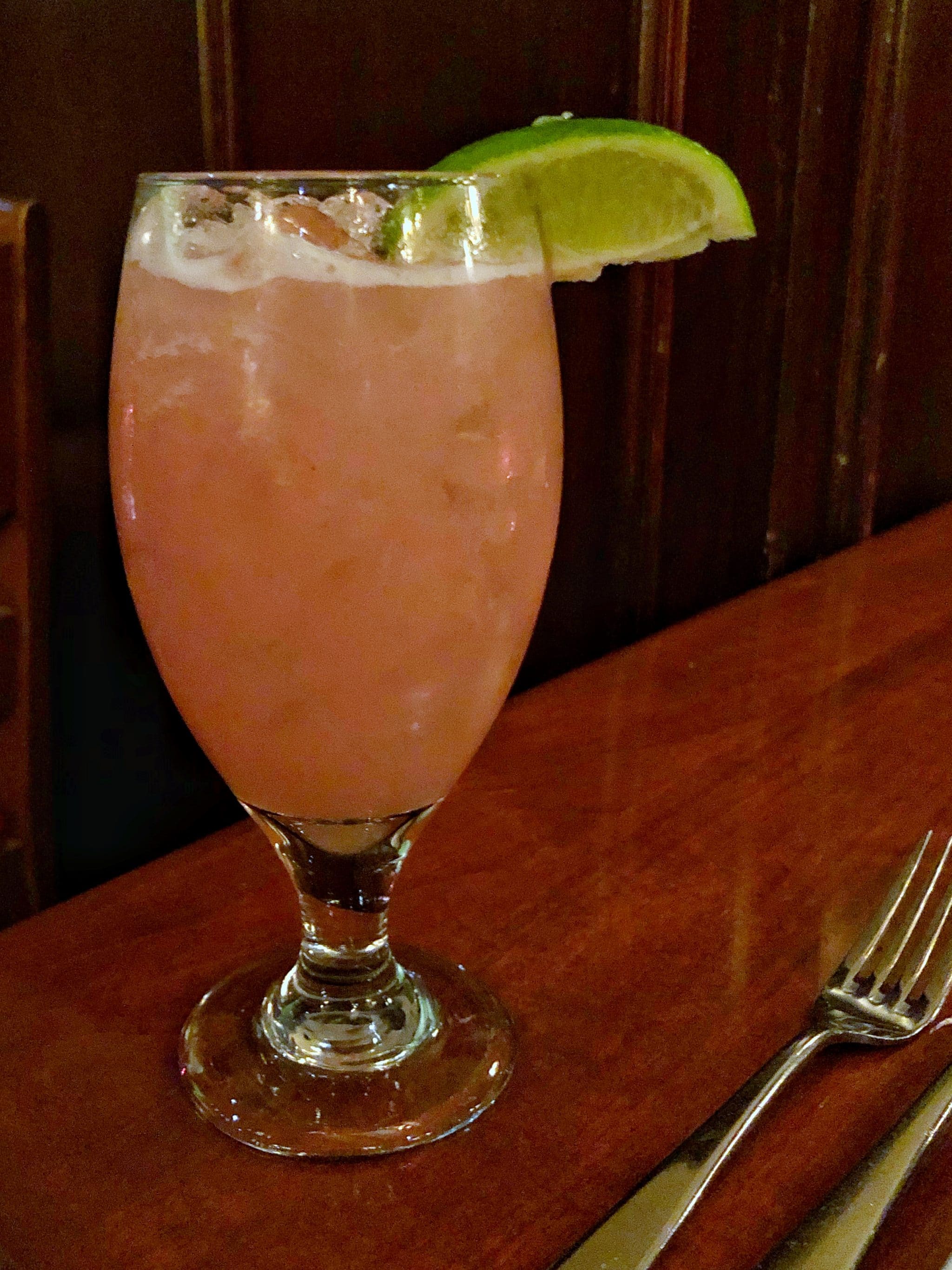 I found this option rather sweet. If you like sweet with a little tart then this beverage is for you.

The first brunch course is a plate of assorted breakfast pastries with yogurt and granola. Because none of the options on that plate are vegan we were presented with the restaurant’s signature Pretzel Rolls with Earth Balance Butter. 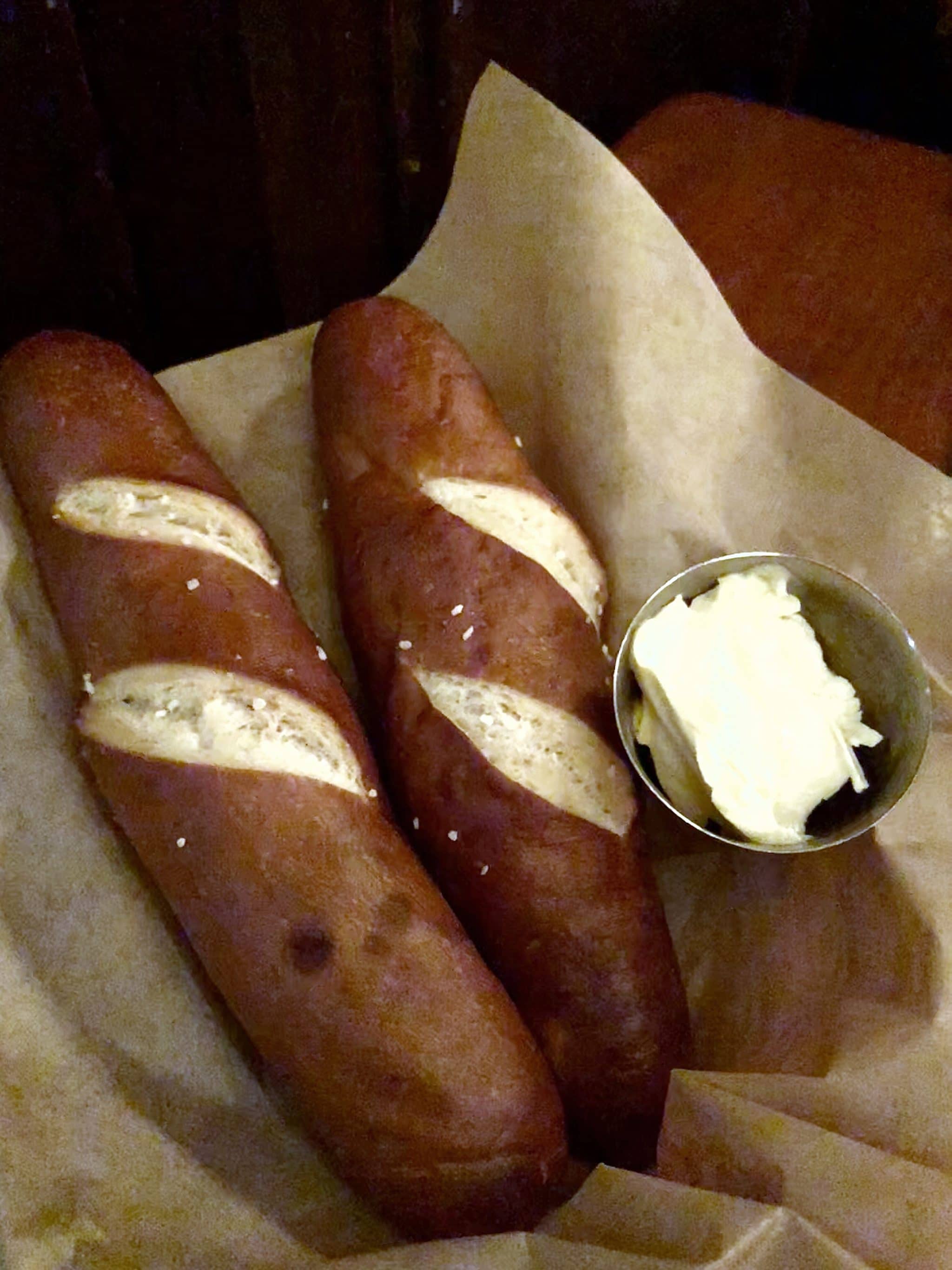 The rolls were warm and salty and I was happy that we were only offered one each because I would have filled up on these little carb loaves for sure!

The appetizer course is a modified Avocado Toast.

This normally consists of a brioche toast topped with avocado cream, tomato jam and goat cheese. 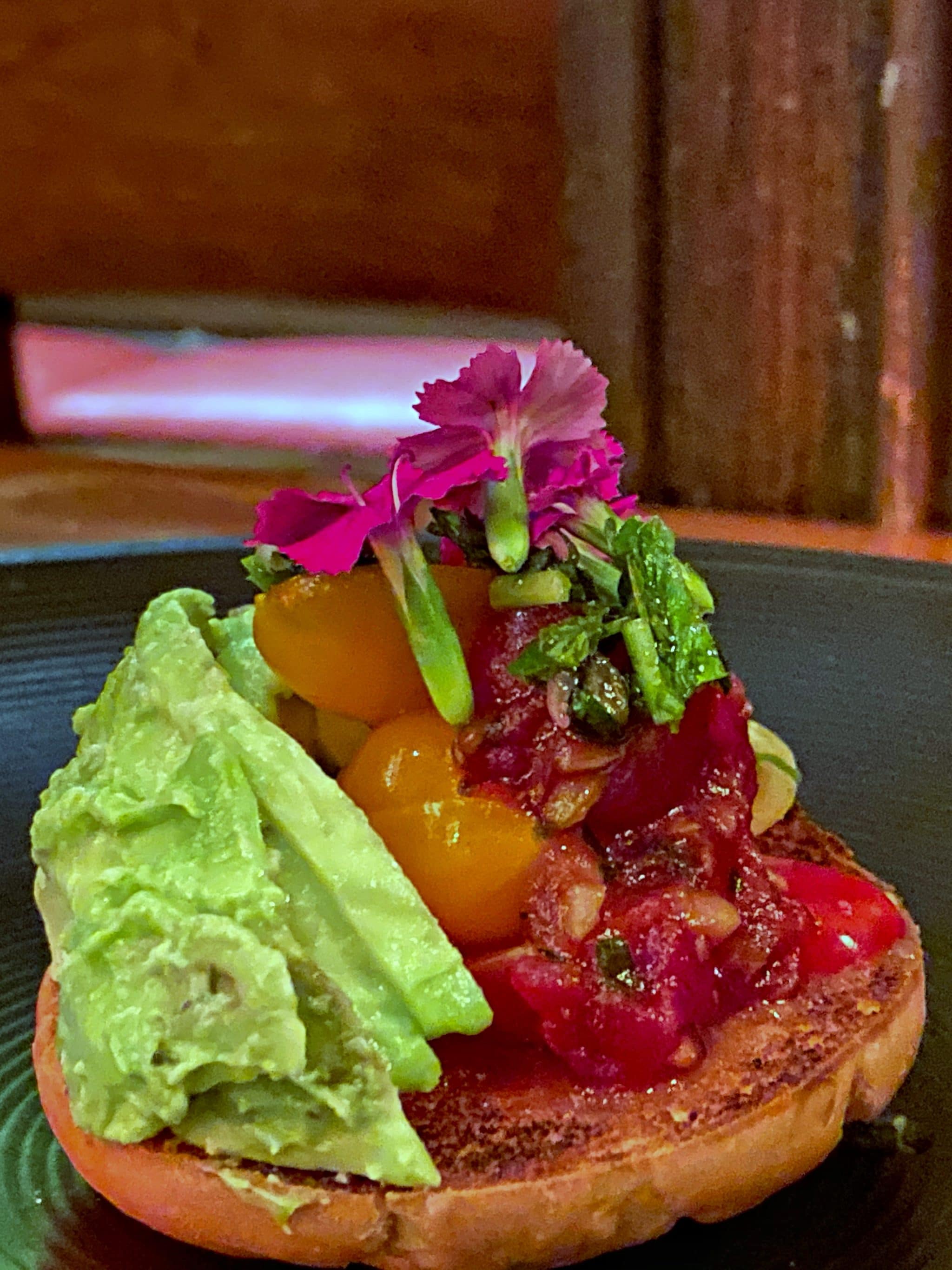 To make it vegan the chefs served ours on a vegan and gluten free Ener-G roll without the avocado cream and goat cheese. Instead ours was topped with tomato jam, fresh tomatoes, thinly sliced avocado, capers and edible flowers.

There were so many delicious toppings that I didn’t even notice the gluten free bread underneath. This was definitely a winner. The tomato jam launched this toast into a whole different stratosphere. 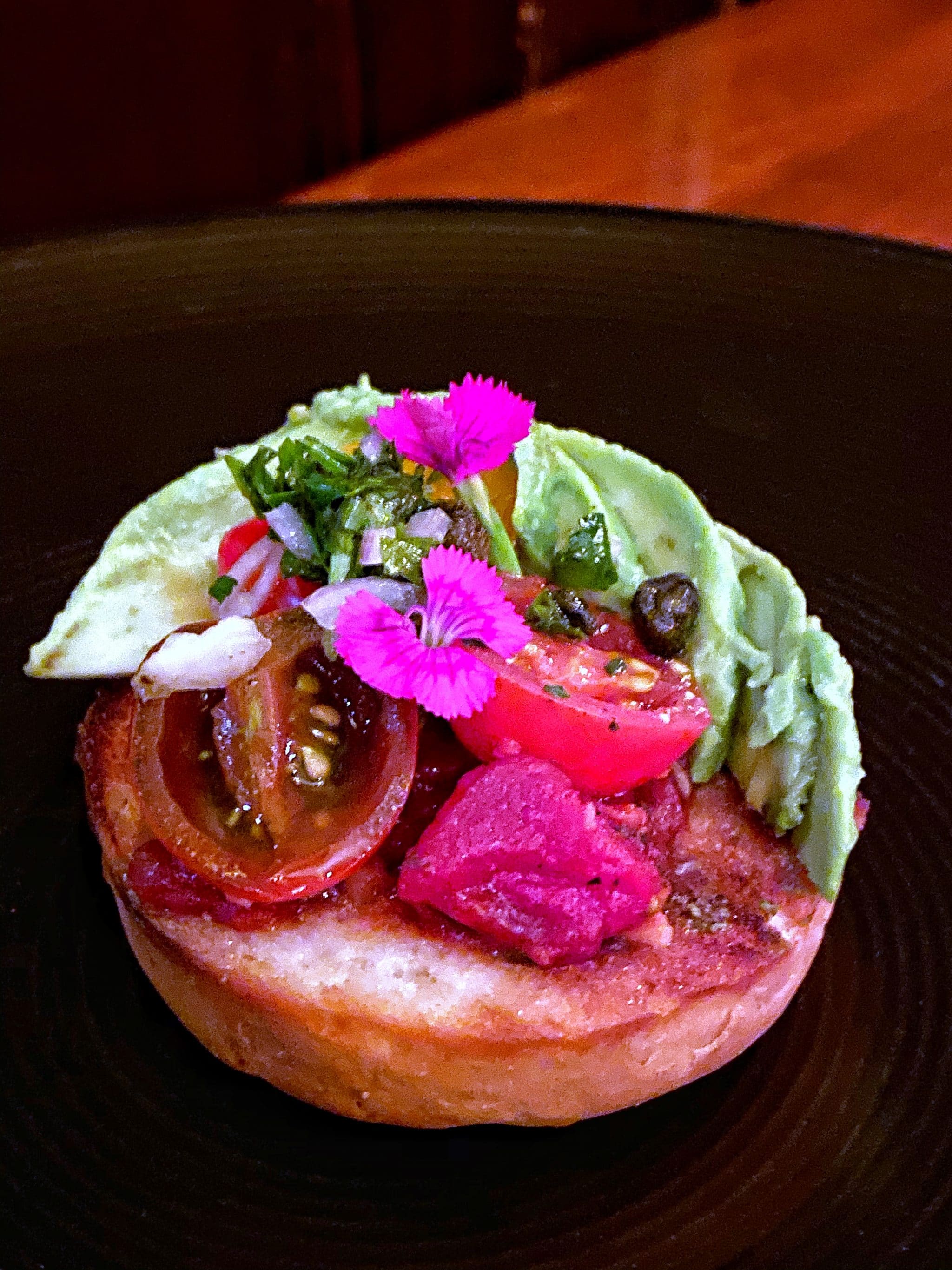 The vegan entree is a modification of their Montreal Spiced Corned Beef Hash.

The plant based Breakfast Hash is served in an individual skillet which is filled with diced red potatoes, peppers, onions and a fine mince of Impossible meat. That’s topped with a mountain of scrambled JUST vegan egg. 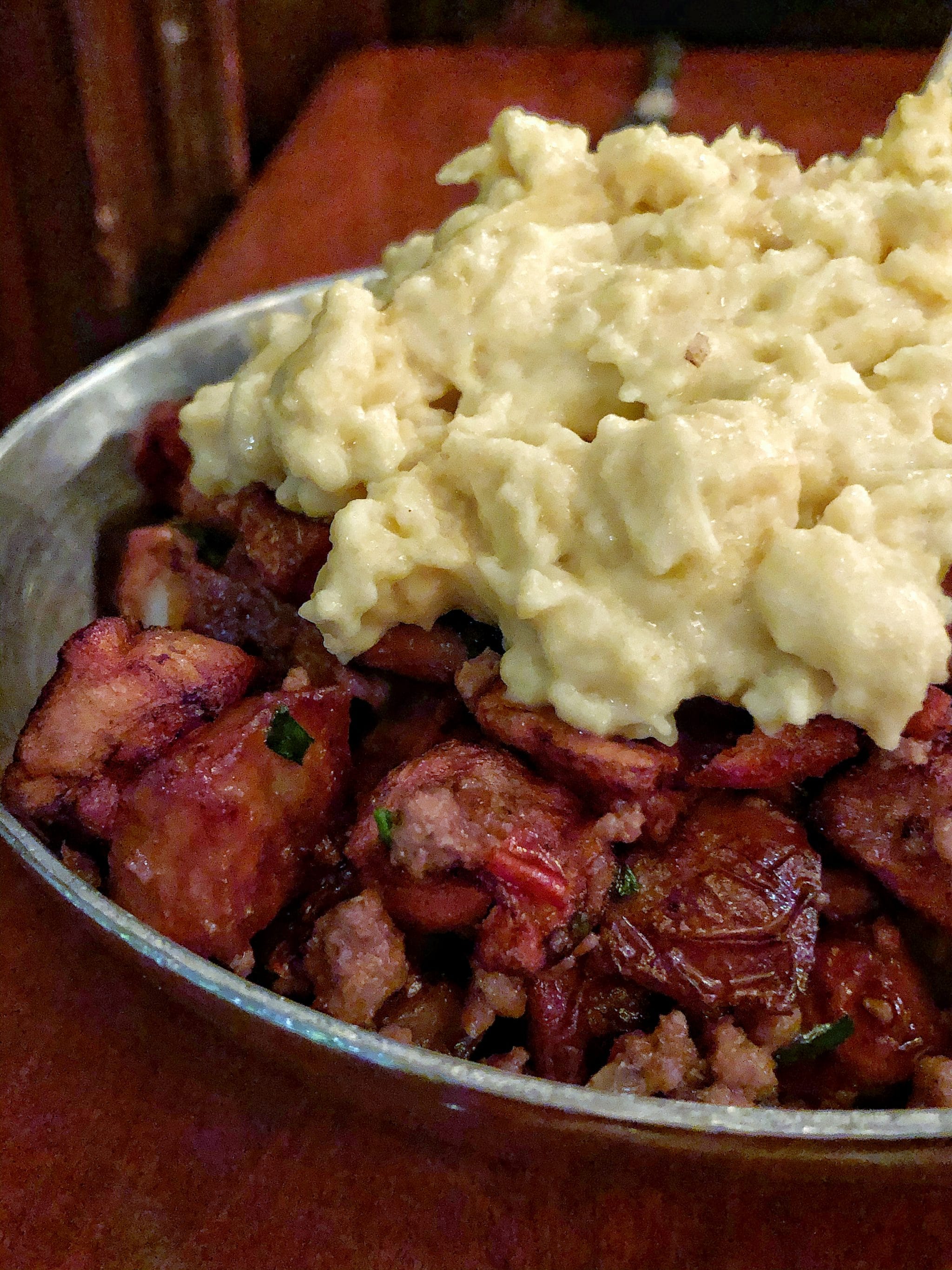 This was an enormous portion size. Everything was cooked perfectly. My dining companion and I both agreed that the overwhelming flavor in this dish was potato. I wish that the Impossible meat wasn’t so finally minced and that there were larger chunks of it so that we could actually taste it. It was also lacking a sauce. A vegan gravy would have made this a 10 out of 10 for me. 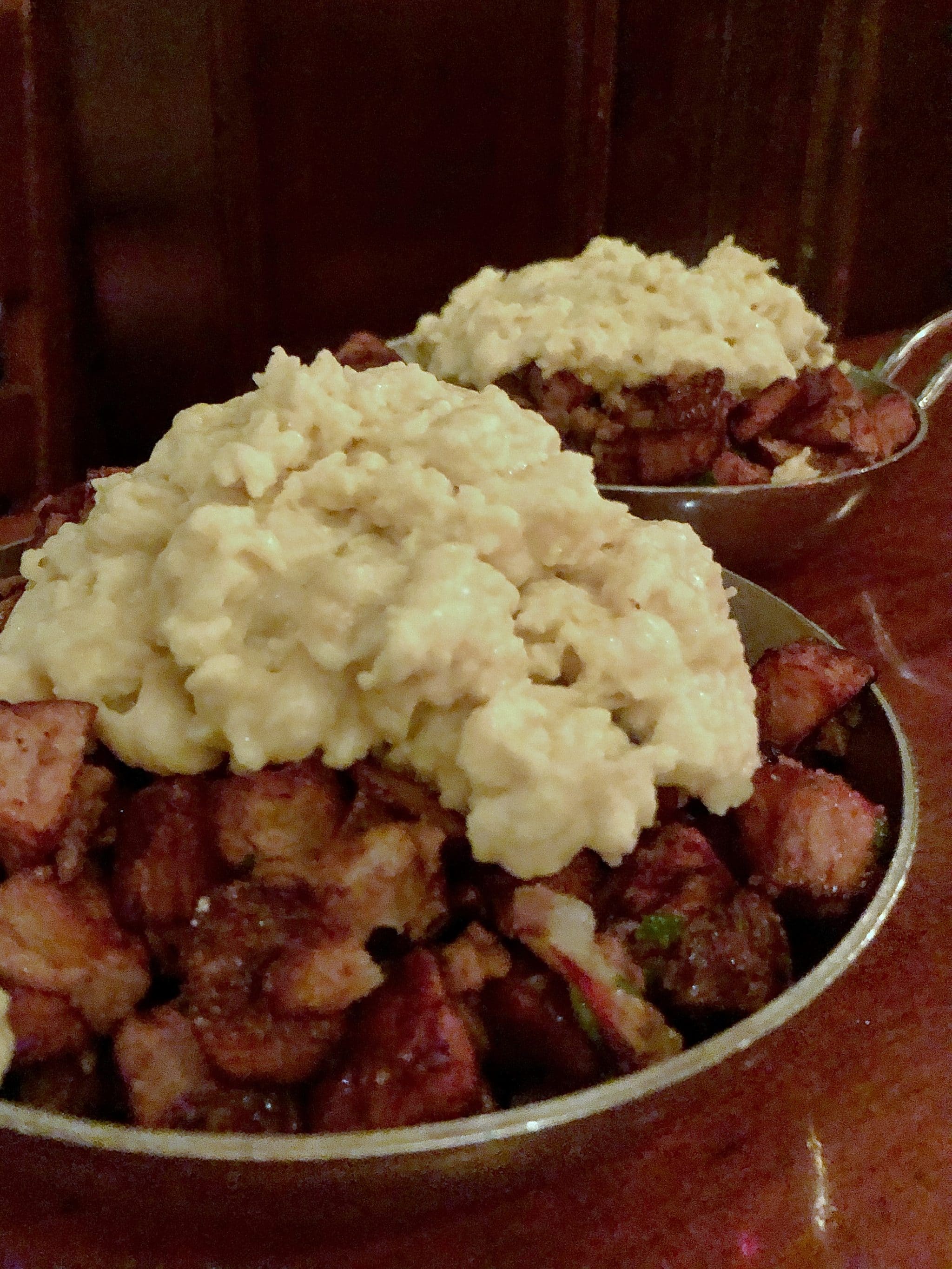 The fourth and final course was dessert, a vegan Carrot Cake. This cake is also available during regular lunch and dinner service at Le Cellier. 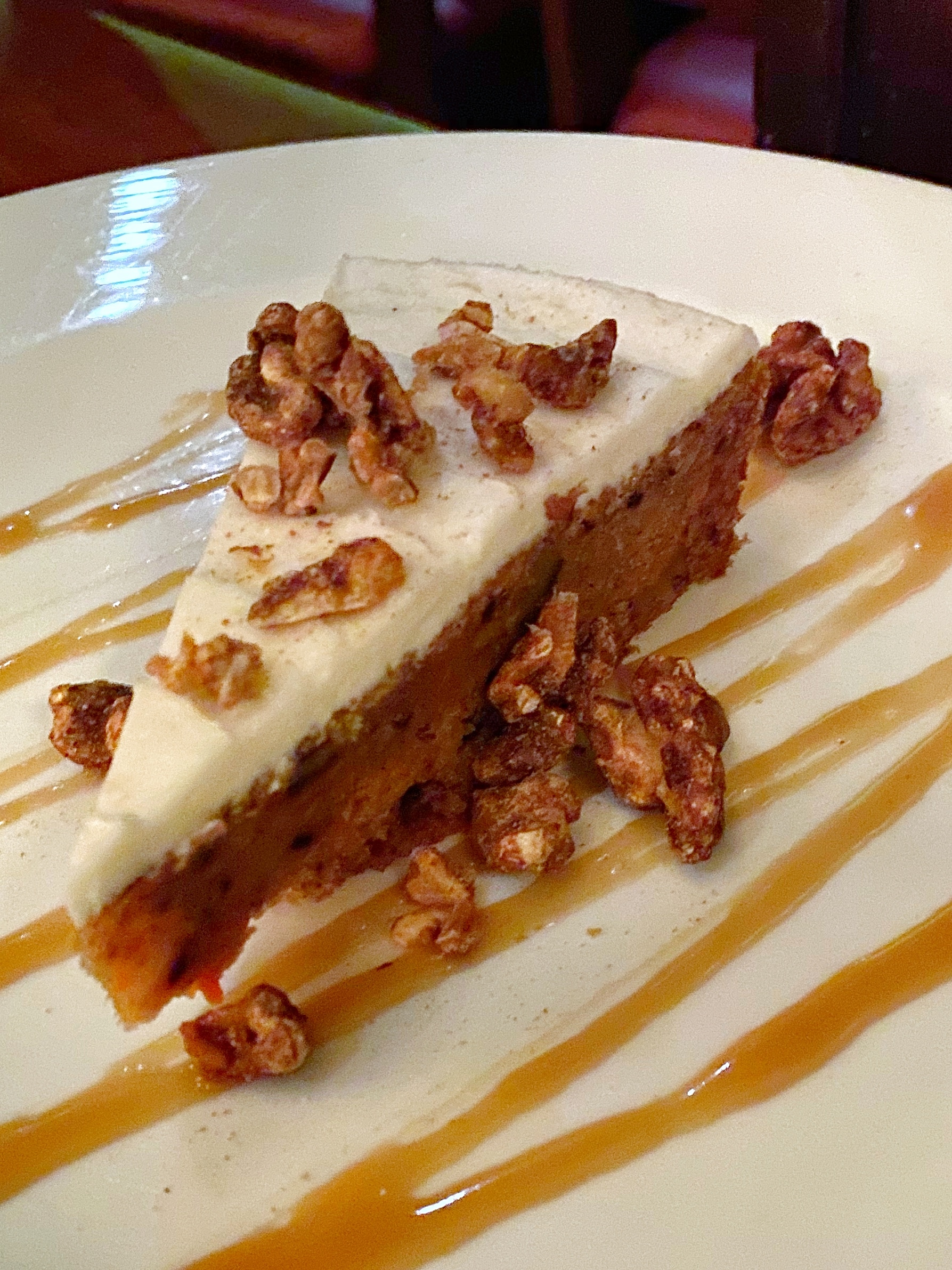 The cake was served on a drizzle of vegan caramel sauce.

You’ll get a decadent slice of dense, moist cake filled with carrot and walnuts. It’s topped with a frosting made from fondant and vegan cream cheese. The cake is garnished with candied walnuts.

We found it to be fantastic and not overly sweet.

This is one of those meals that I would definitely pay to go back to again. Right now it’s only offered on Saturdays and Sundays from 11:00 a.m. to 3:00 p.m. Brunch is Disney Dining Plan eligible and will run you two table service credits. I hope that the restaurant decides to keep this brunch going after the conclusion of the Epcot International Festival of the Arts on February 23rd, 2020.

Check out our Le Cellier Brunch vlog for more.

For a list of ALL the vegan items available at the Epcot theme park reference our comprehensive guide here: What’s Vegan in Epcot?

Want to remember this option? Save the “Vegan Brunch at Le Cellier Steakhouse in Epcot at Walt Disney World” pin to your favorite Pinterest board. 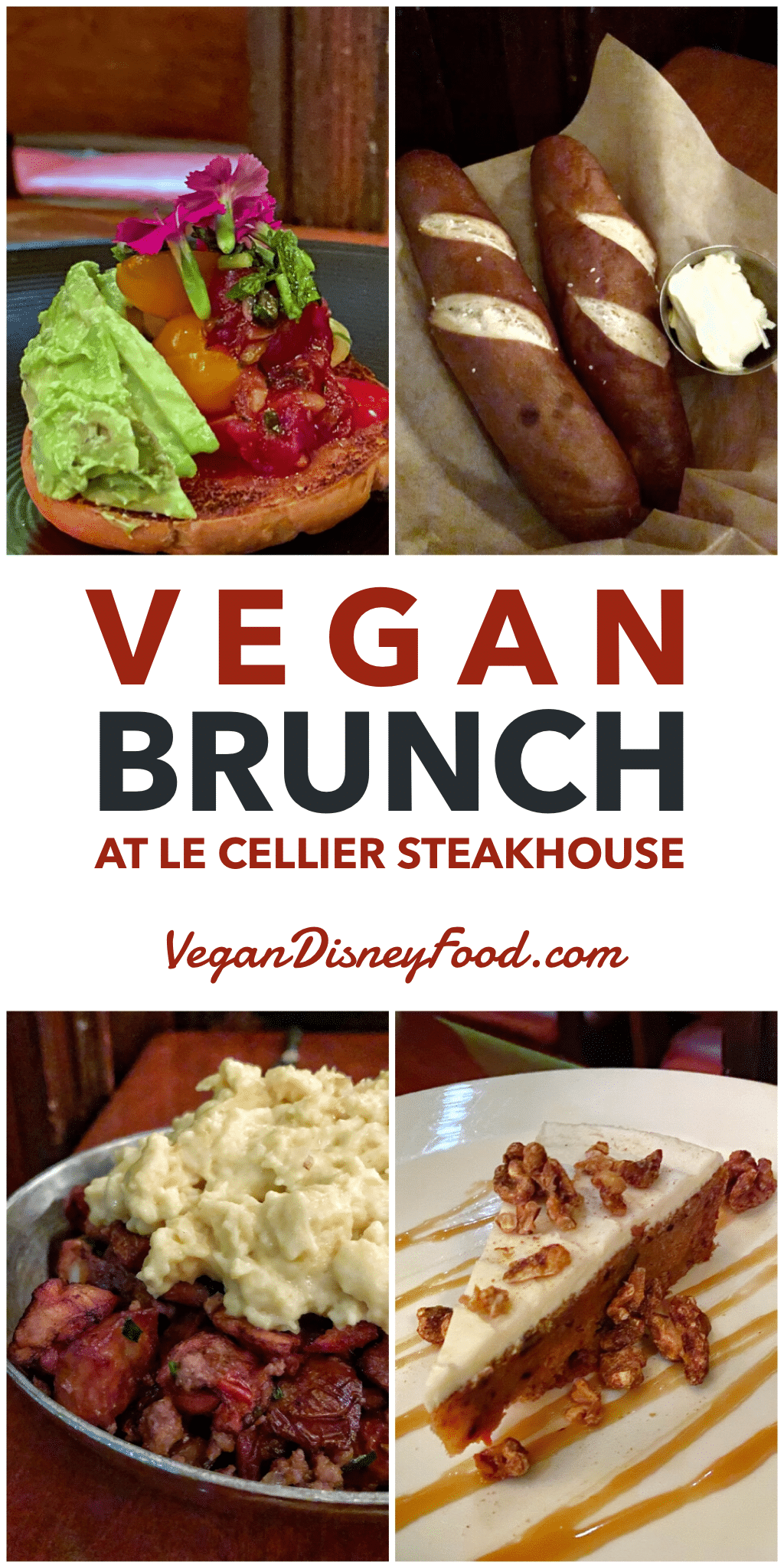