This year ushered in the grand opening of Disney’s Coronado Springs Gran Destino Tower at the Walt Disney World Resort. The tower itself is a modern masterpiece which draws inspiration from the friendship between Walt Disney and Salvador Dali. Today we are going to talk about the crowning jewel of Gran Destino Tower. The 16th floor of this new building is home to Walt Disney World’s newest restaurant, Toledo and neighboring bar the Dahlia Lounge. So what’s vegan there?

Dahlia Lounge gives you the feeling of walking into an art installation. Everything you see has been inspired by the animated short film “Destino” which was a collaboration between Disney and Dali.

The storyline revolves around an immortal named Chronos who falls in love with a mortal woman named Dahlia. Throughout the film Dahlia dances through scenes depicting Dali’s works of art. These scenes burst forth into reality as decorative touches inside Dahlia Lounge. 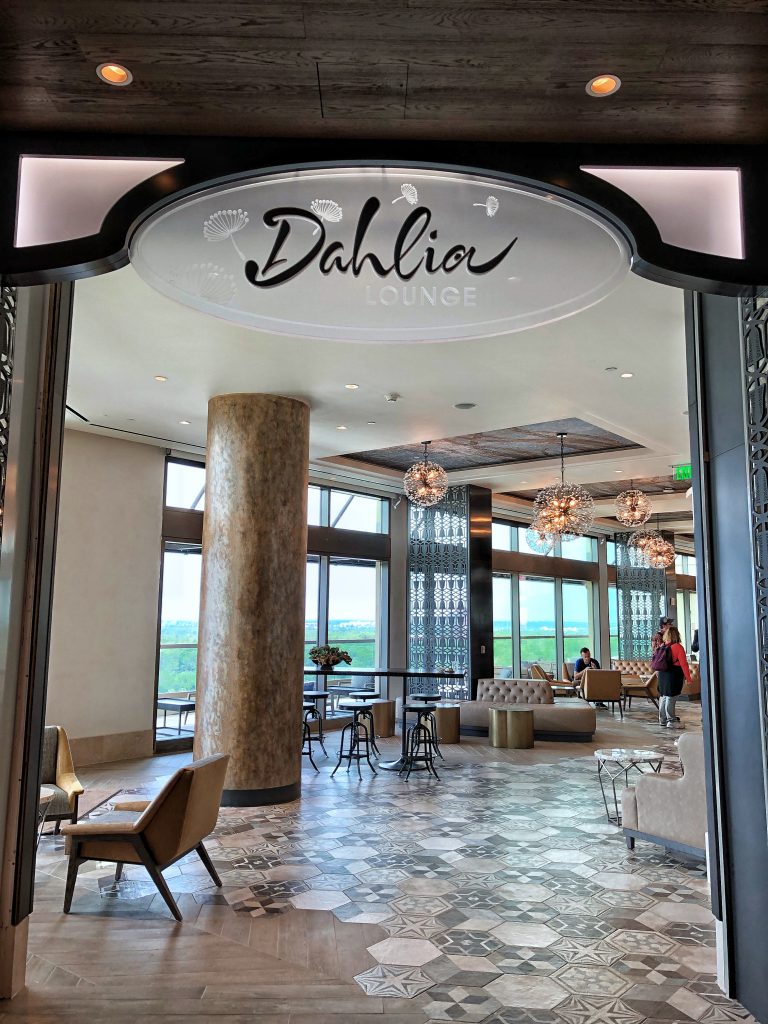 The Lounge itself is a very bright open space with floor to ceiling glass windows that look out onto the viewing terrace. The terrace has panoramic views of Epcot, the Swan and Dolphin hotels, Disney’s Hollywood Studios and the Blizzard Beach water park. 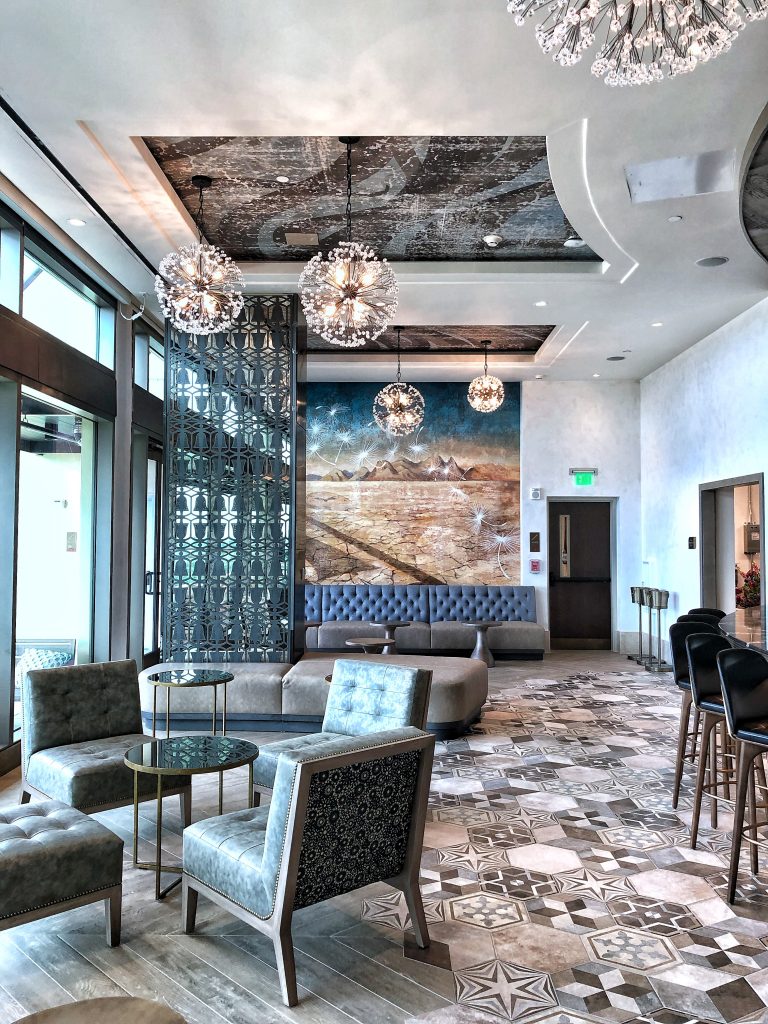 We had a prime viewing spot for Epcot’s “IllumiNations: Reflections of Earth” fireworks as well as “Star Wars: A Galactic Spectacular” fireworks over Disney’s Hollywood Studios from the outdoor terrace. I expect the lounge to be extremely popular for this fact alone.

Seating is plentiful both inside and out with an eclectic mix of styles, colors and textures. 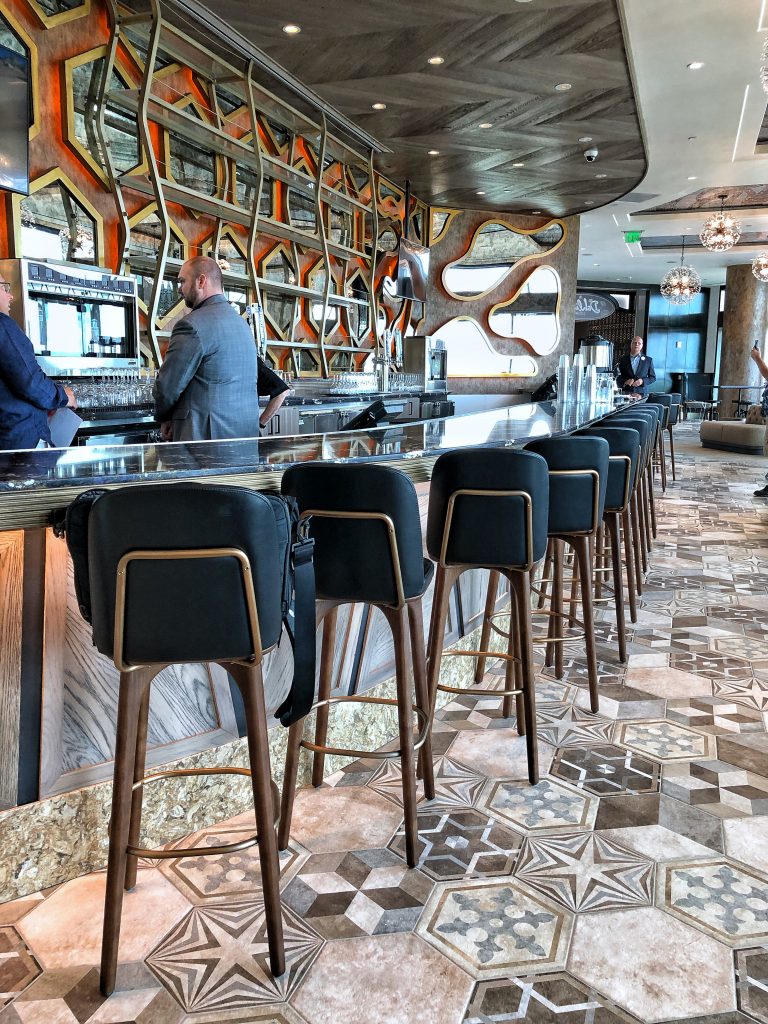 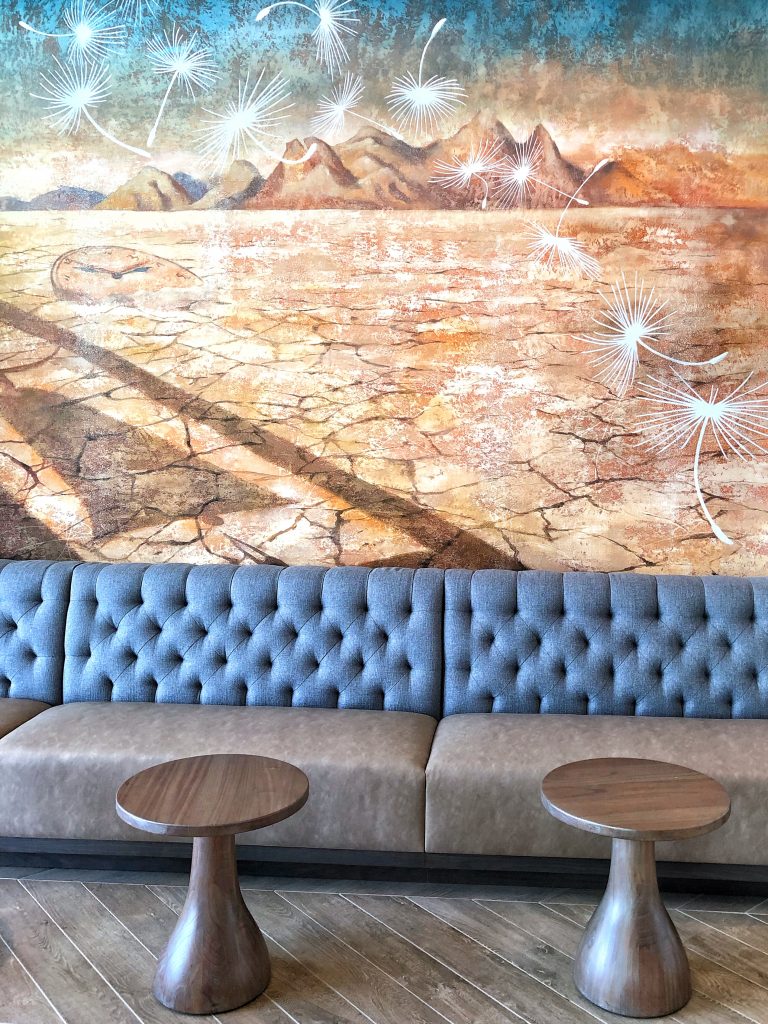 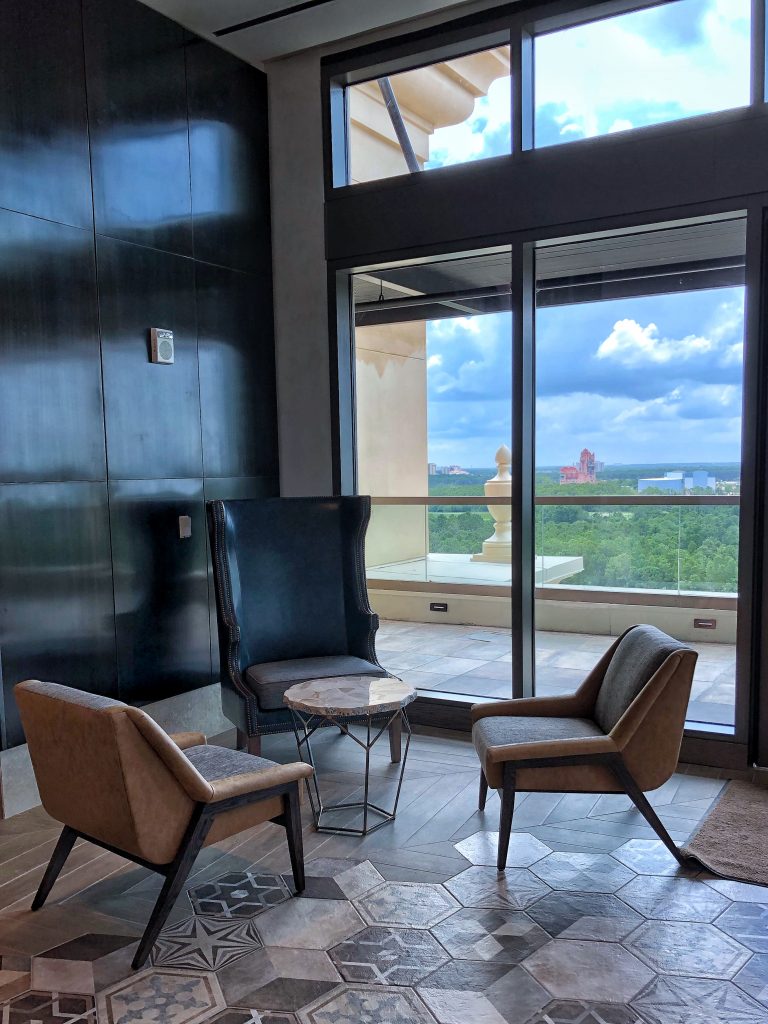 The room is a perfect balance of warm neutral colored tones and cool blues and greys. 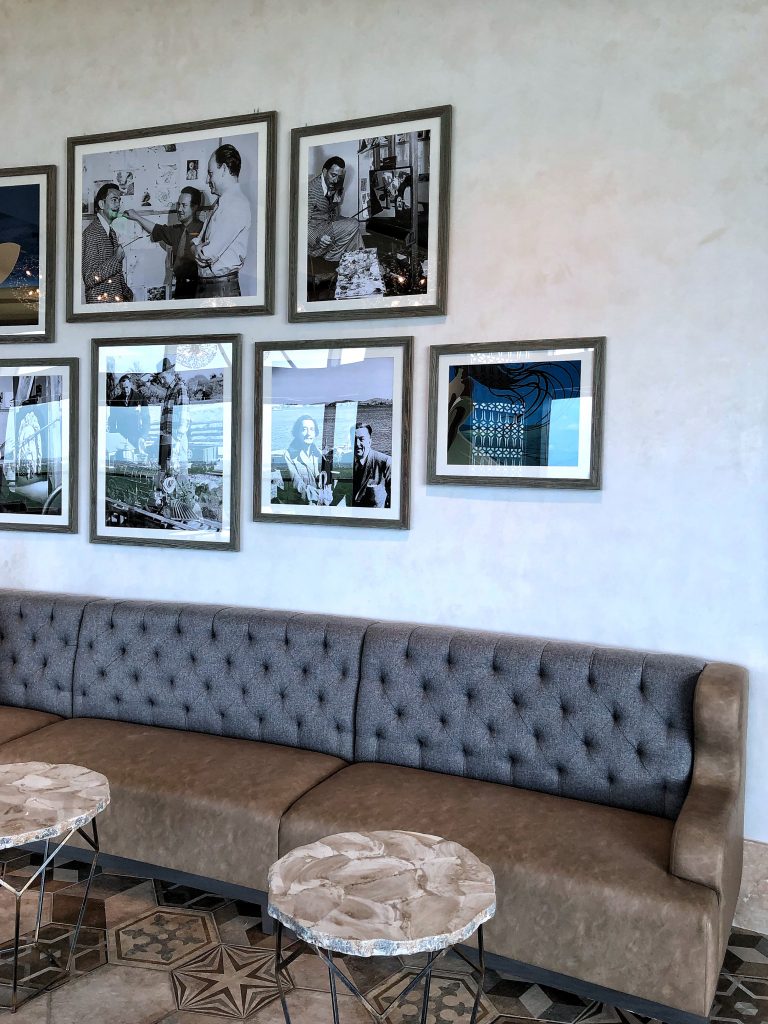 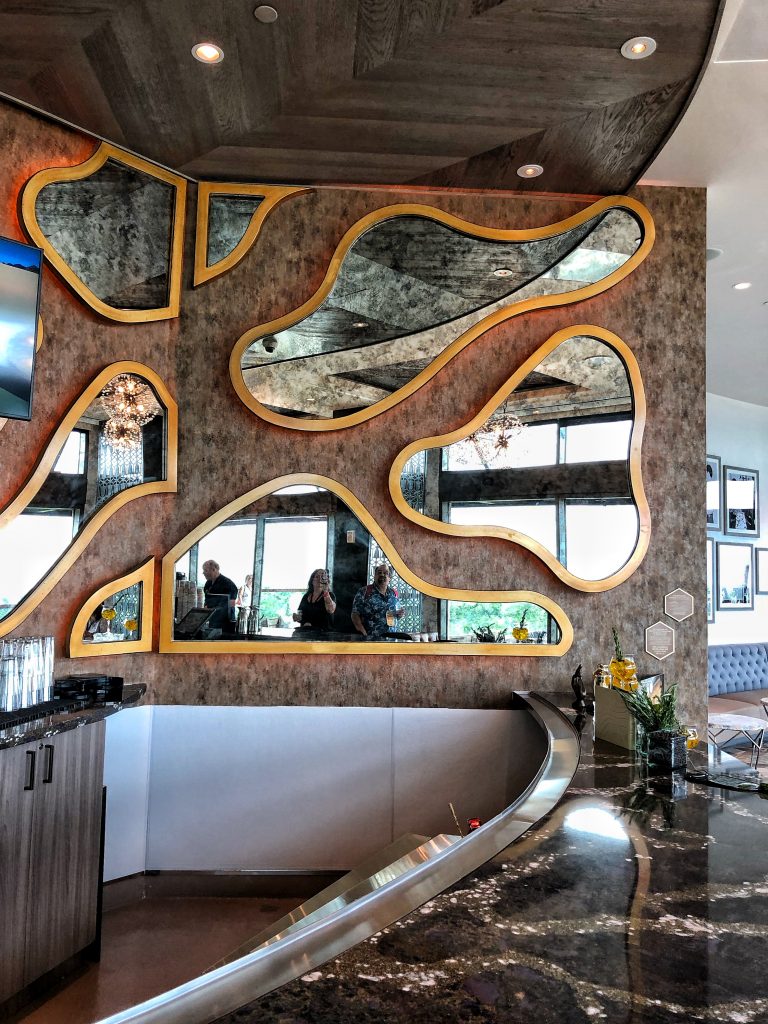 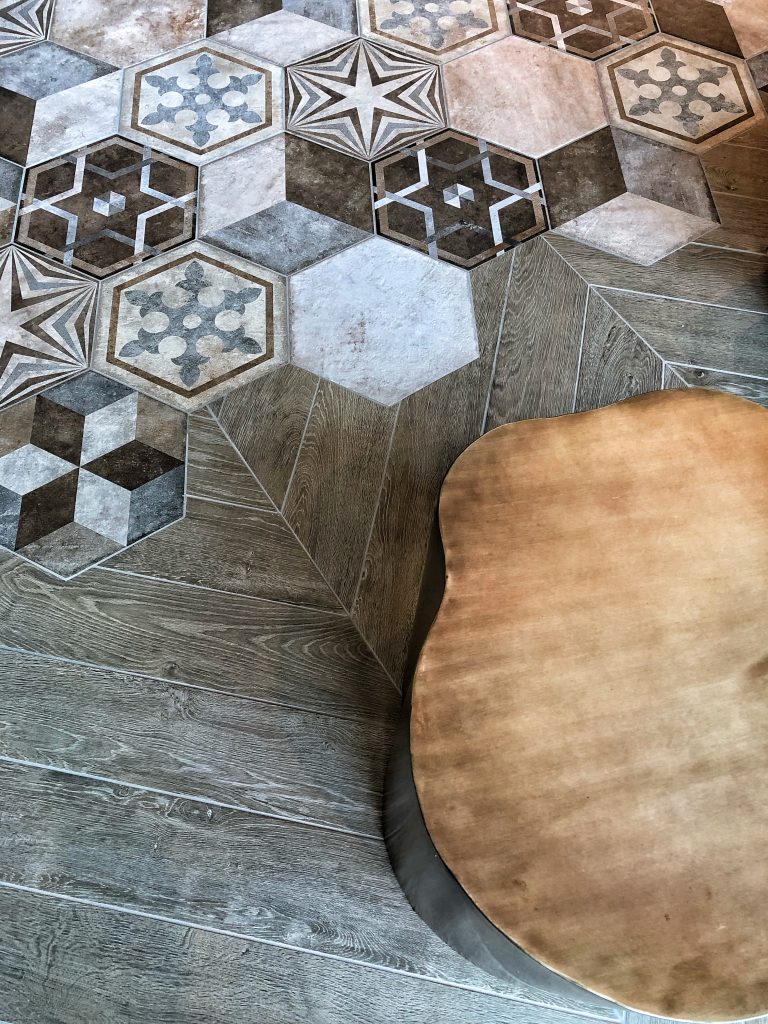 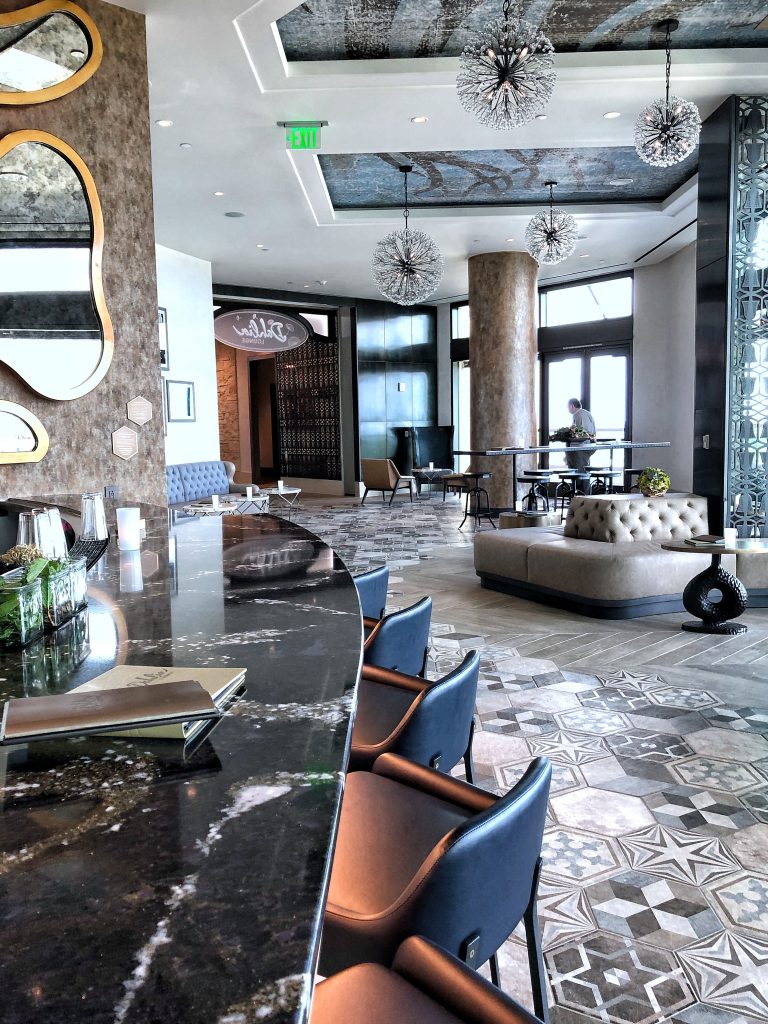 The bar is serving up unique and thoughtful cocktails you won’t find at any other Walt Disney World lounges. Both the drinks and small bites menu have a heavy Spanish influence.

I sampled two specialty craft cocktails on my visit.

This is the El Pepino ($12.50) made with Xoriguer Gin de Mahón, Ancho Reyes Verde Chile Poblano, St~Germain Elderflower Liqueur, lime and cucumber. It was very smooth and not overly sweet. 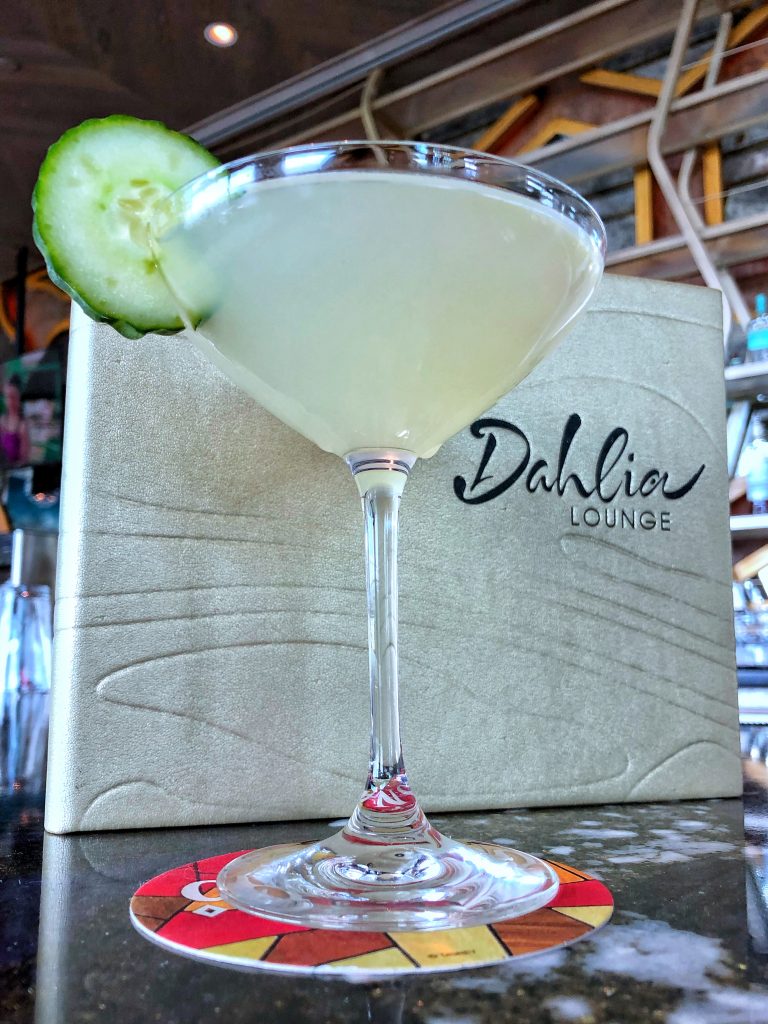 I also treated myself to the La Lavanda Gin Tonic ($13) which is composed of Xoriguer Gin de Mahón, Q Tonic, lime juice and soda water with a fresh lavender flower garnish. This one was light and refreshing and served in beautiful stemware. 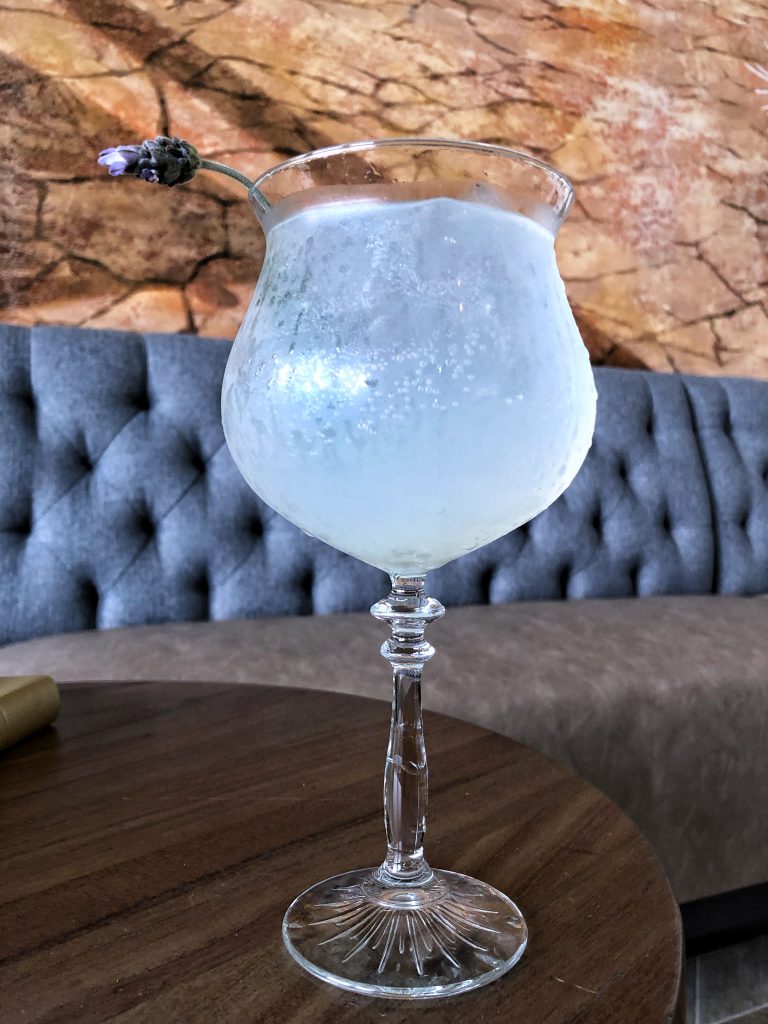 On to the food… 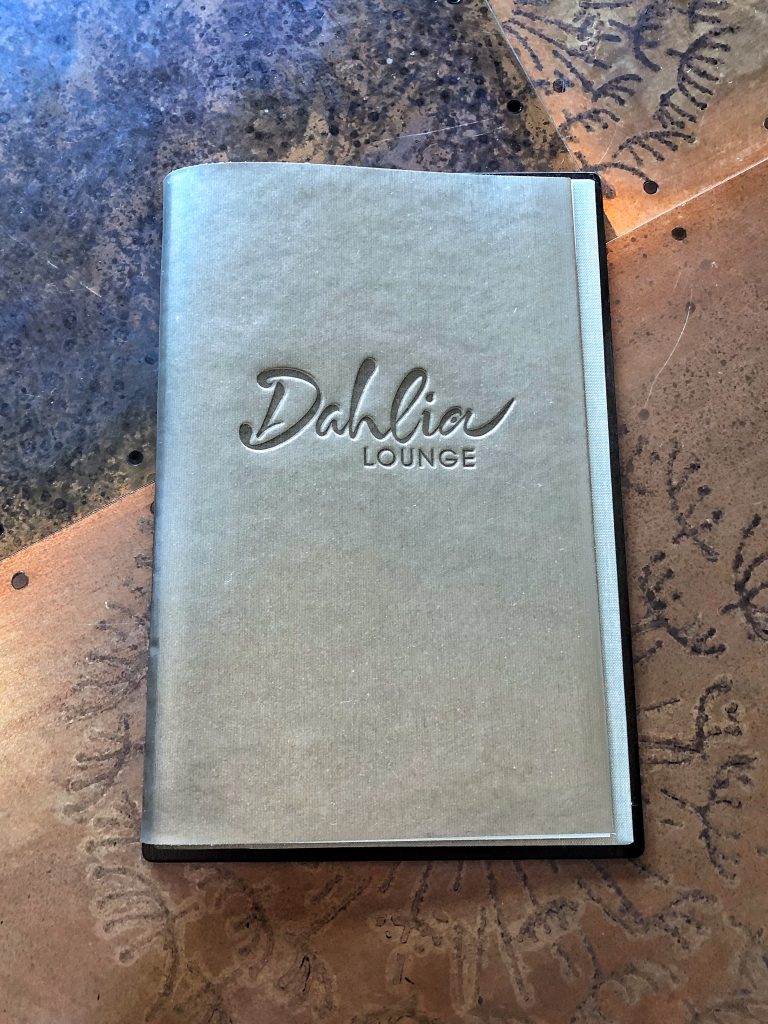 There are two vegan friendly items on the Dahlia Lounge menu.

You can indulge in the Espelette-dusted Marcona Almonds ($7) which are vegan as-is right off the menu and an extremely generous portion size. 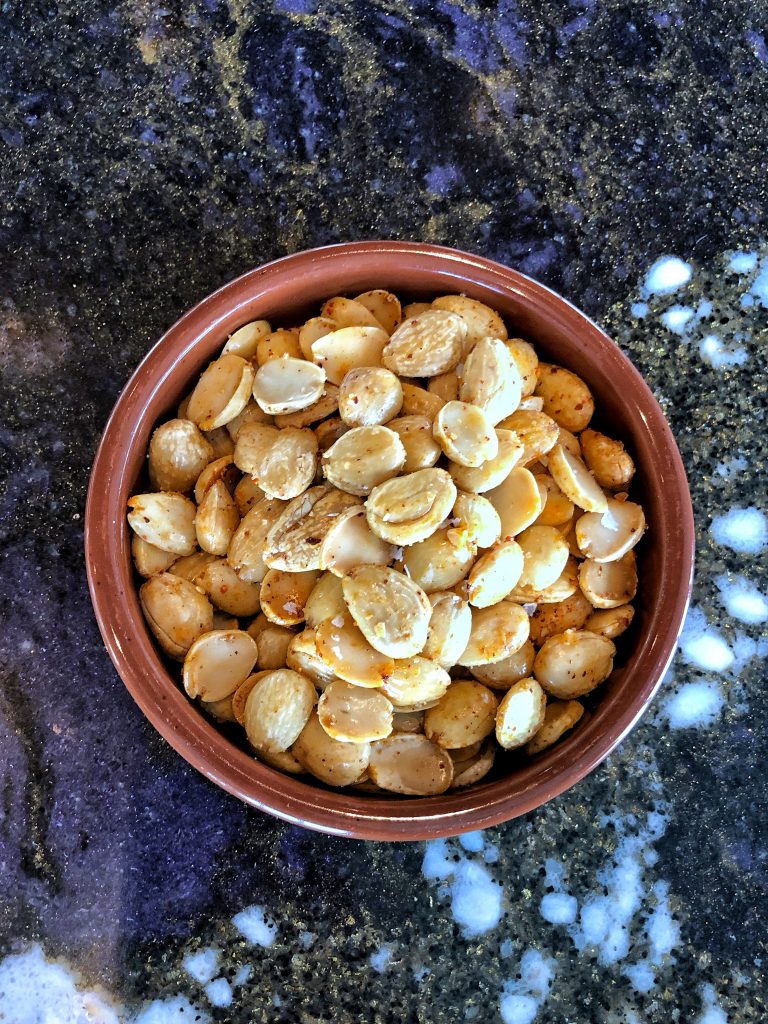 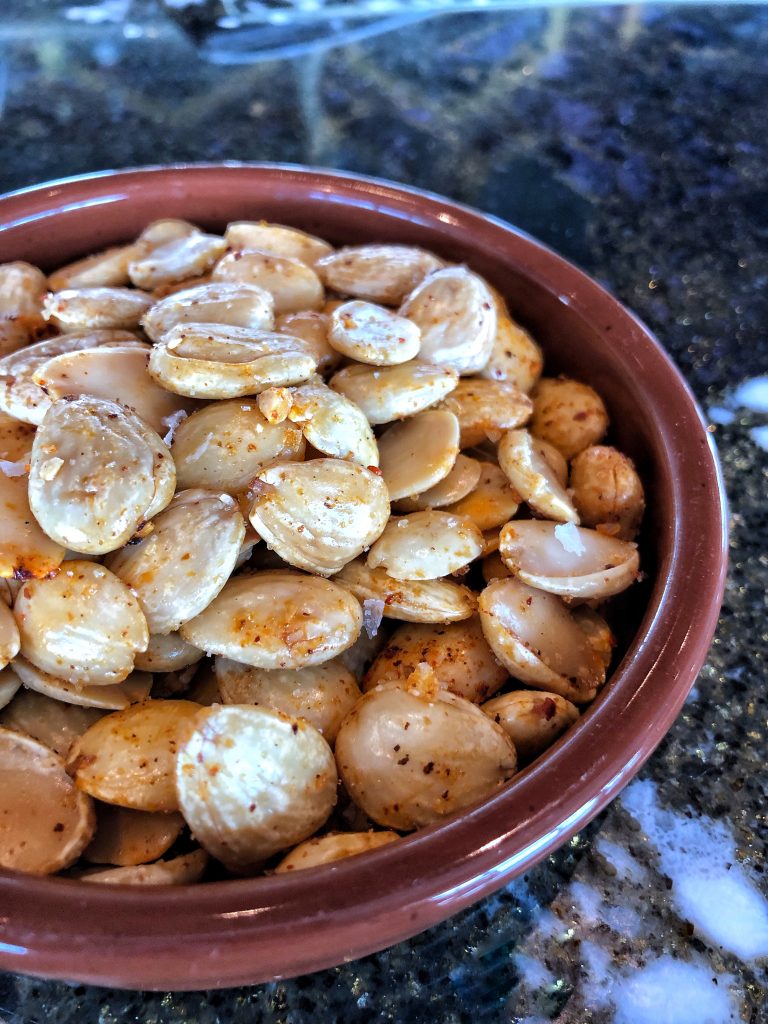 Or opt for the modified Roasted Beets ($9) which come plated on a bed of hummus with saffron, dill and sesame seeds. Omit the yogurt to make them vegan. 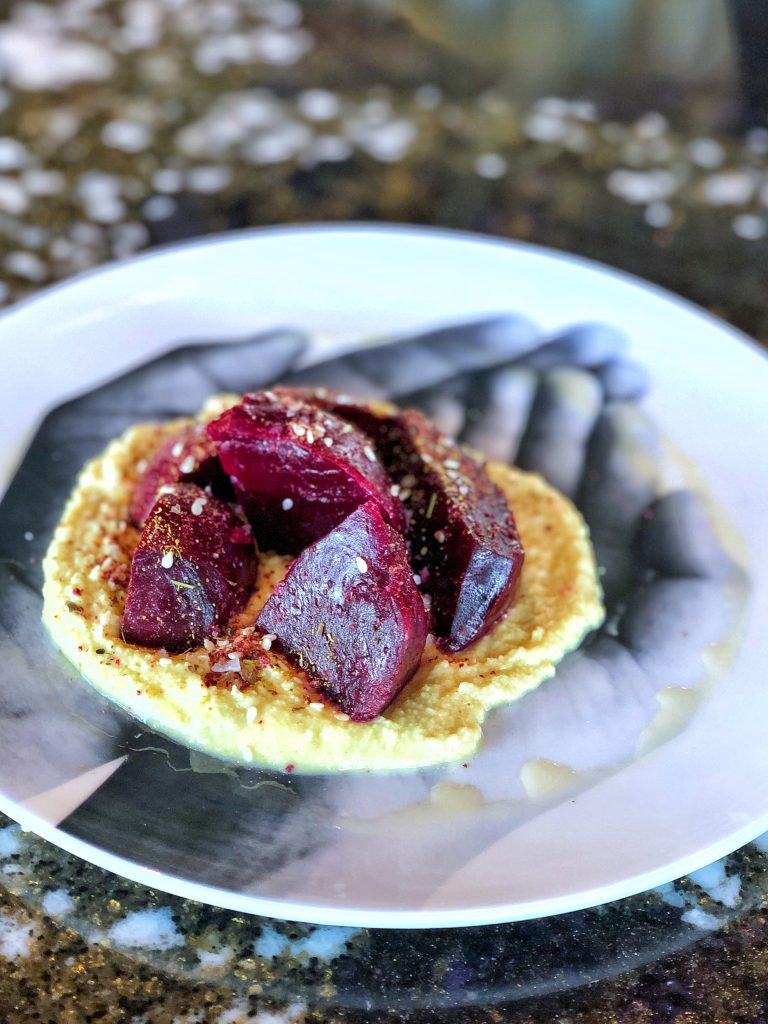 How epic is this cupped hands plate they arrive to you on?! 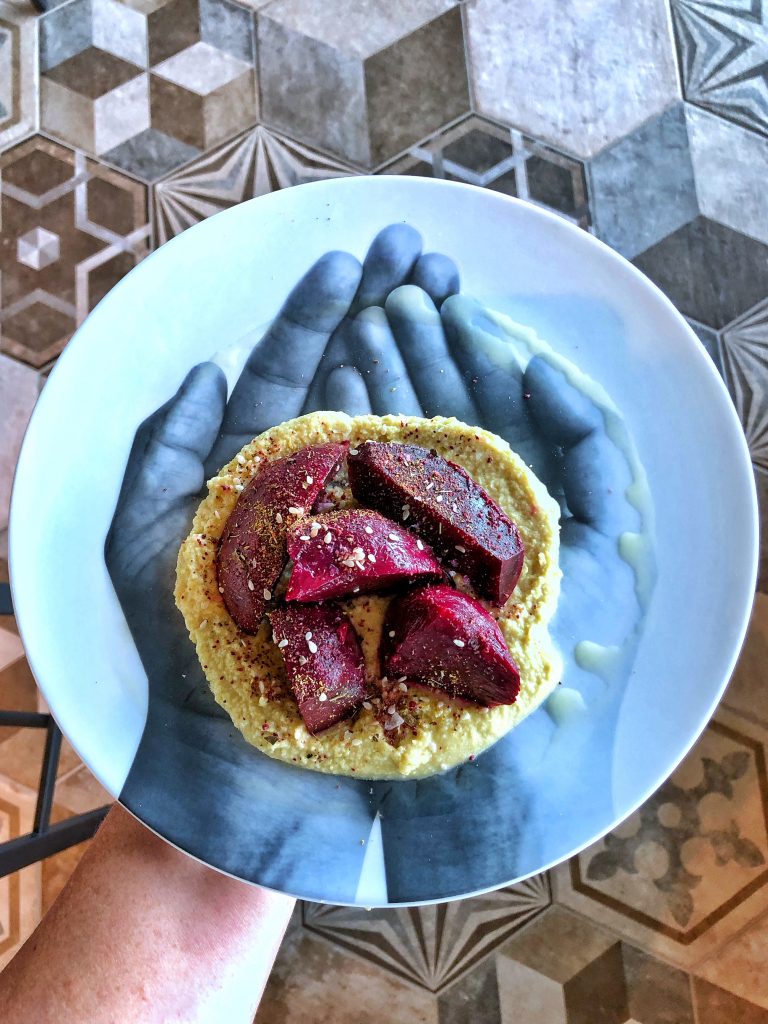 This was my favorite of the two small bites we sampled. 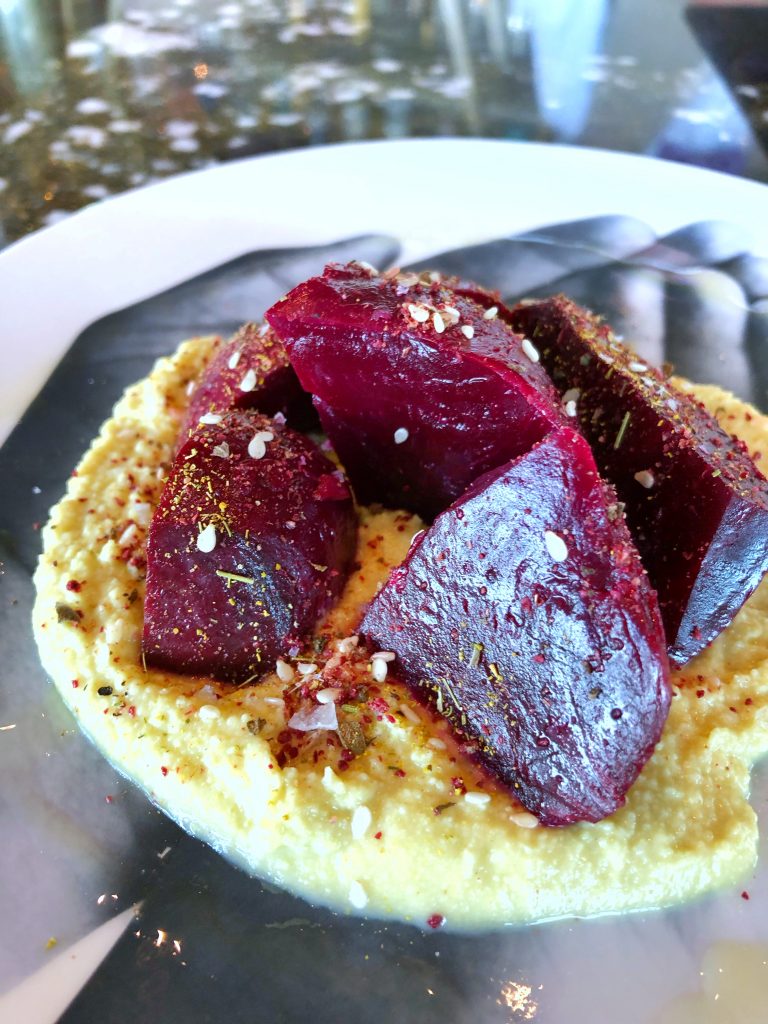 Cross your fingers that you’ll visit the lounge on a night that this dream team (Tomas, Tiffiny, Mike) is mixing and pouring. You may recognize these friendly faces from some of your favorite Walt Disney World restaurants and lounges. 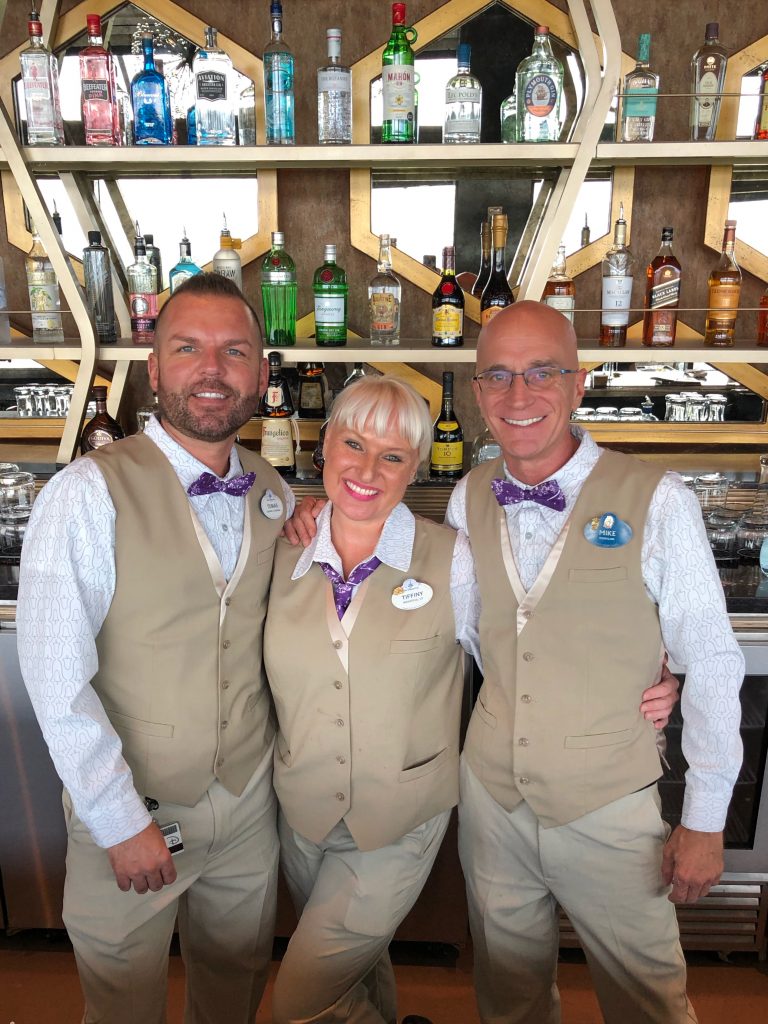 After pre gaming at Dahlia Lounge we made our way over to Toledo – Tapas,  Steak and Seafood for a proper dinner.

The lounge is now accepting the Tables in Wonderland discount card. Also note that the fireworks soundtrack is not piped into the restaurant or lounge at this time.  You do not have to be staying at the resort to visit the lounge and capacity is capped at around fifty guests inside and thirty outside on the terrace. 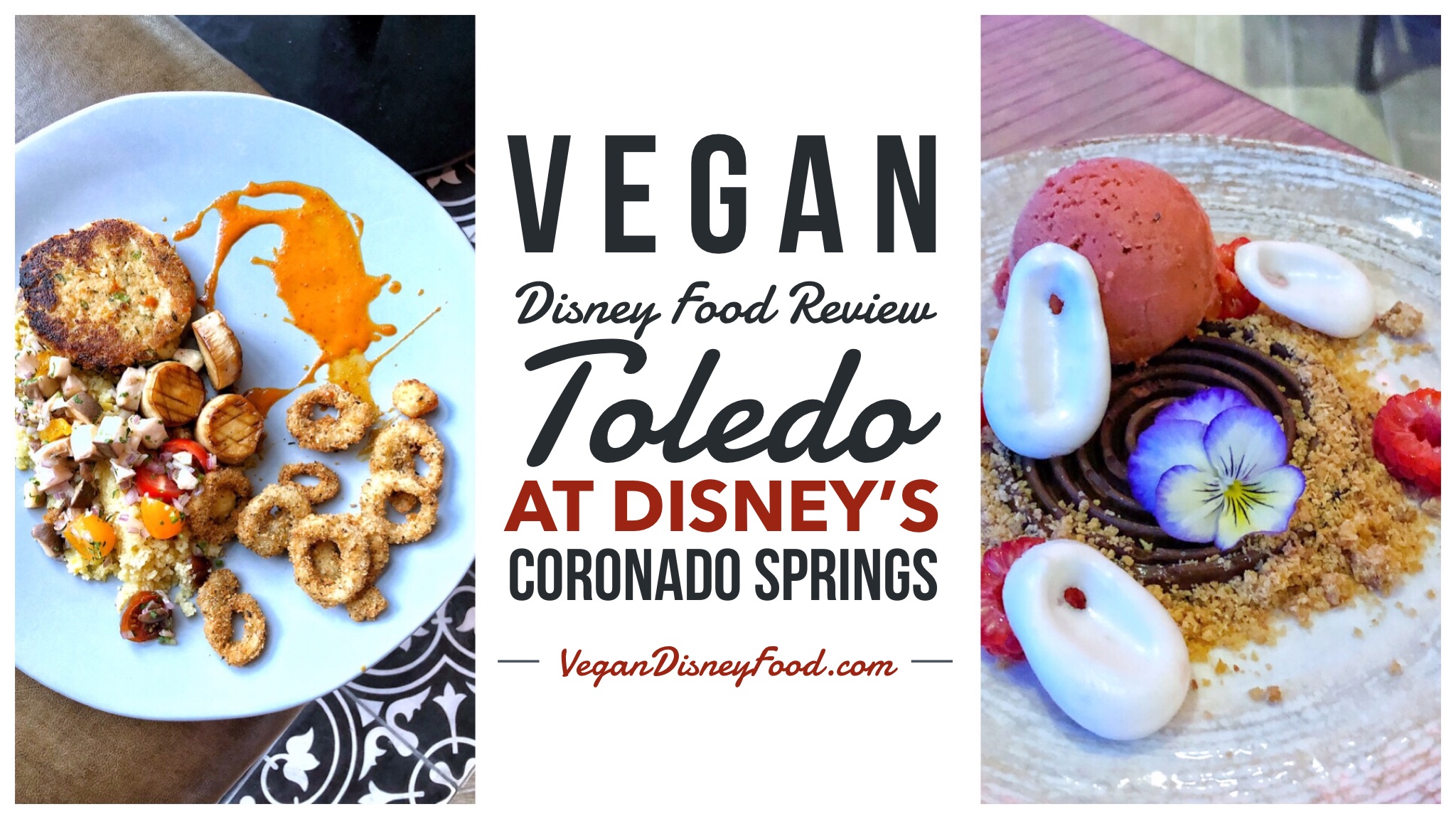 WANT TO REMEMBER THIS OPTION? Save the “What’s Vegan at Dahlia Lounge at Disney’s Coronado Springs Gran Destino” pin to your favorite Pinterest board. 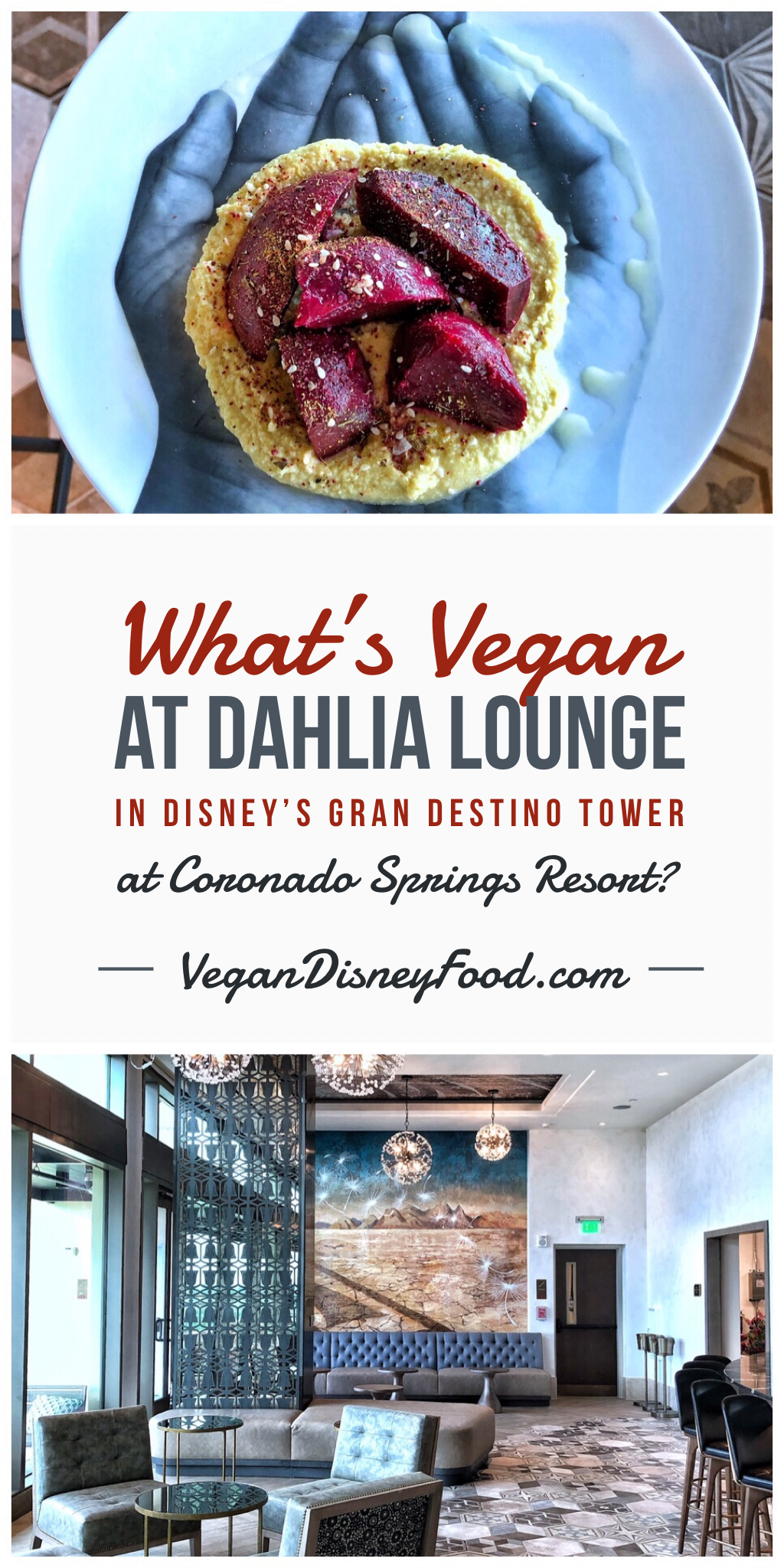