We are updating our original post from the opening of Toledo inside the Gran Destino Tower at Walt Disney World’s Coronado Springs Resort from 2019. Toledo remained closed for well over a year during 2020 and just reopened on August 5th, 2021. We dined the first night to share the updated vegan menu options with you. We also added a video review that we’ll upload later today for a closer look at the food and atmosphere at Toledo and Gran Destino Tower. 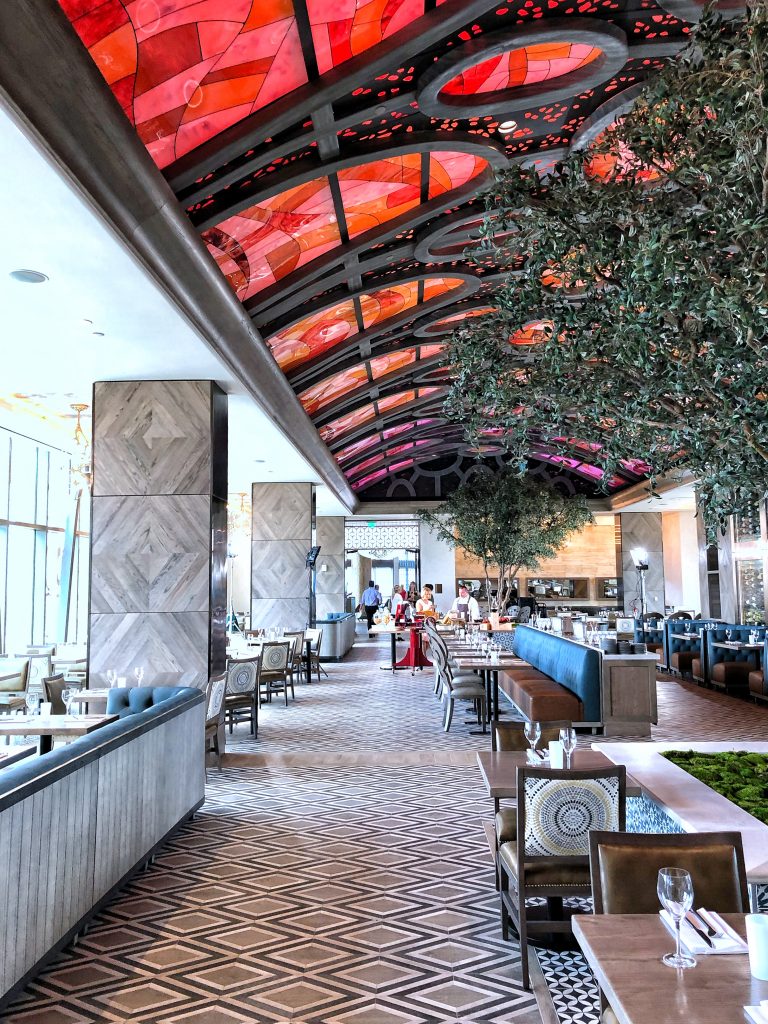 This has to be one of the most stunning spaces at Walt Disney World Resort to date. It’s so beautiful just to be in this space. As a bonus, the food is incredible!

The restaurant takes its inspiration from the relationship that Walt Disney had with the artist Salvador Dali. The muted black, white and grey restaurant interior is a stark contrast to the colorful arched stained glass ceiling. 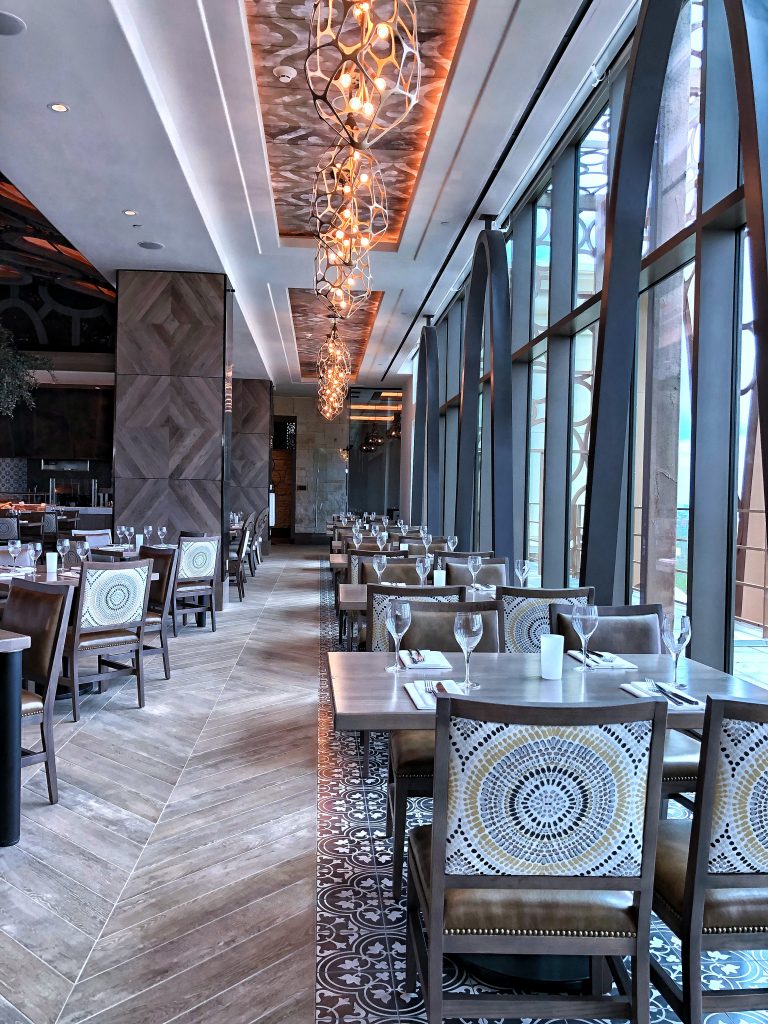 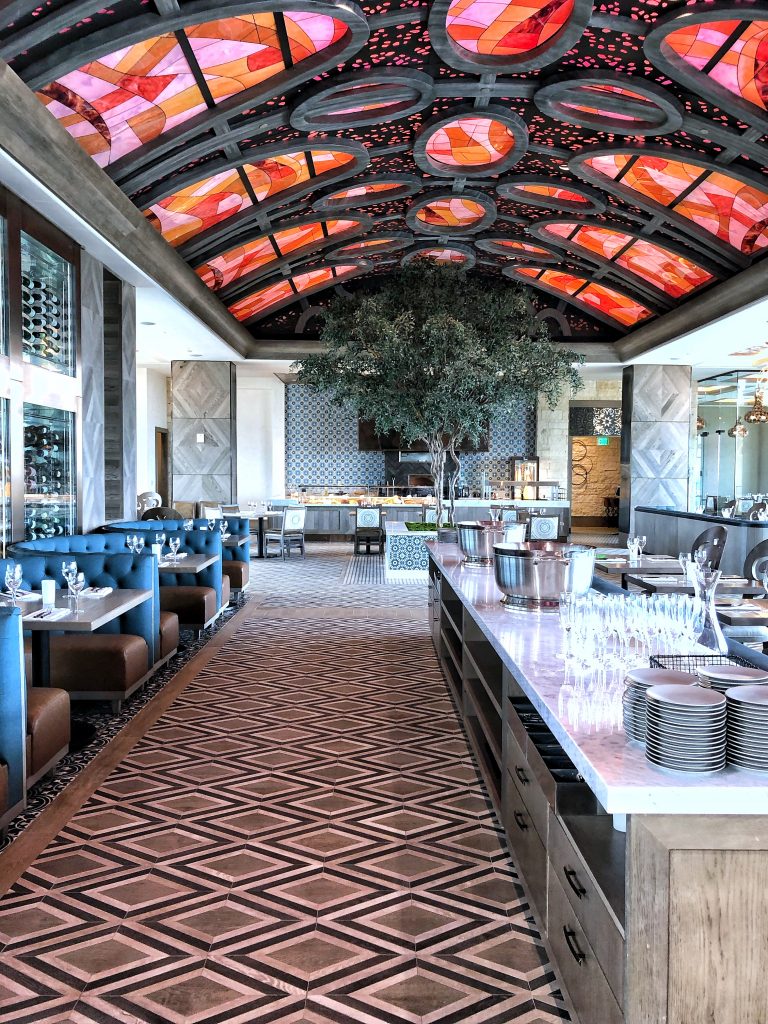 Massive floor to ceiling windows let an abundance of natural light into the space. They also make for breathtaking views of the resort grounds.

Disney’s Hollywood Studios, Epcot and Blizzard Beach are extremely close and you can also see as far as the Magic Kingdom on the opposite side of the restaurant. 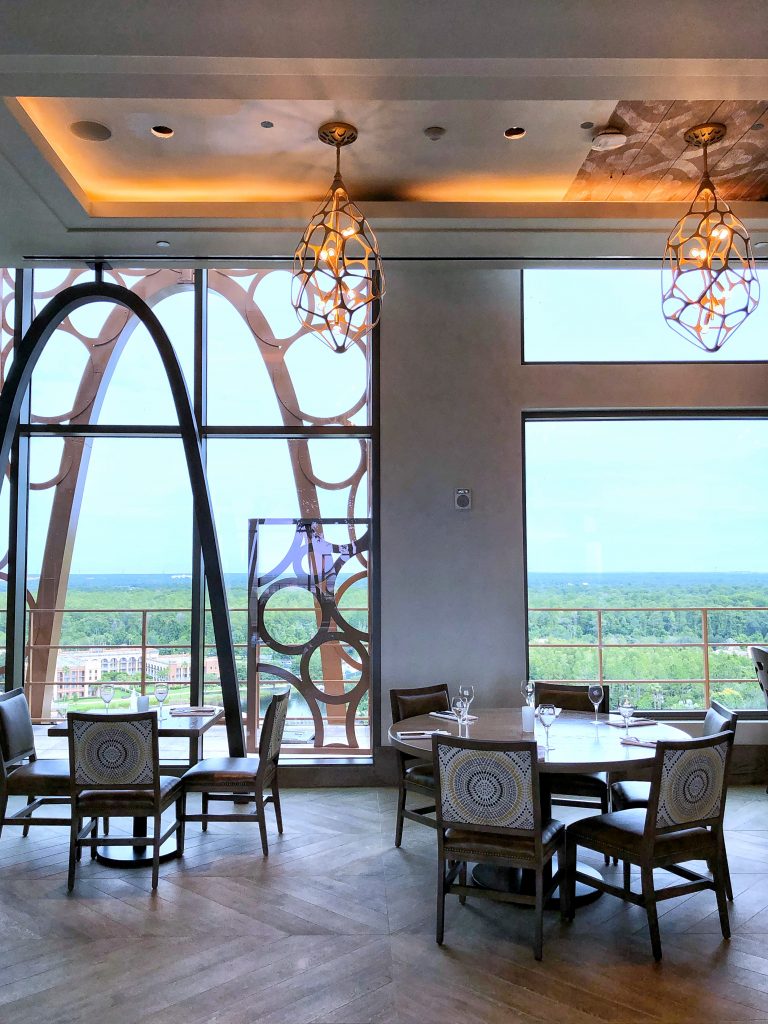 The dining room’s design incorporates a myriad of different shapes and textures throughout. Spanish influences can be seen in both the interior with its massive olive trees and its menu items. 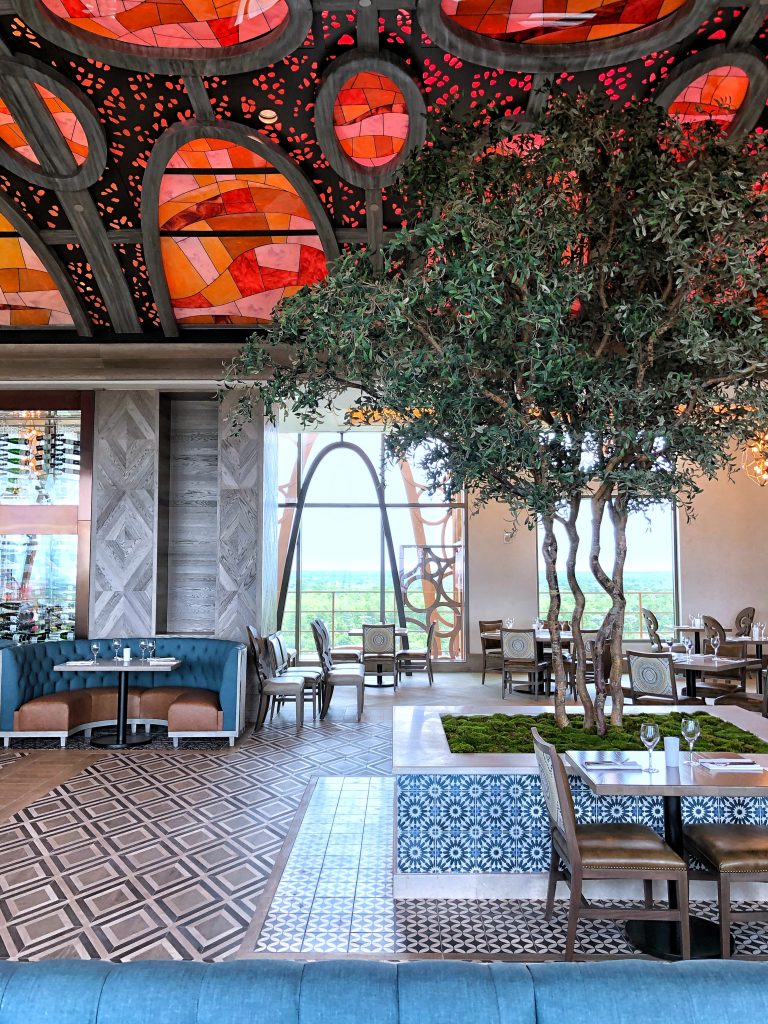 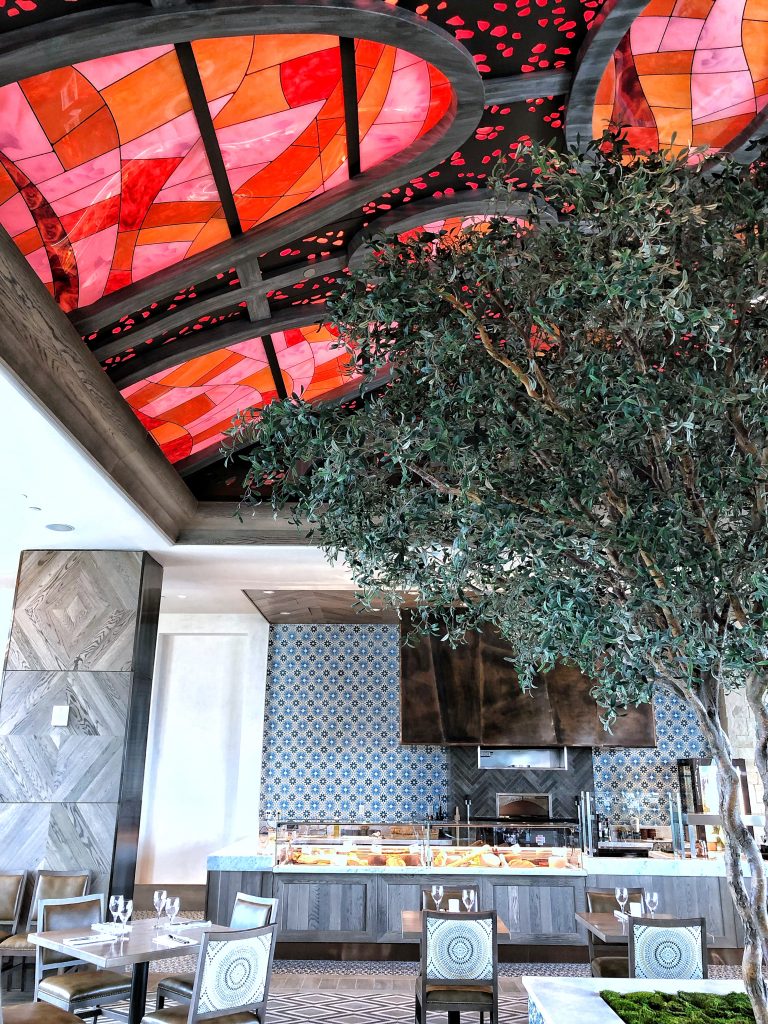 Seating options include tables, banquettes and booths which line a massive wine display. 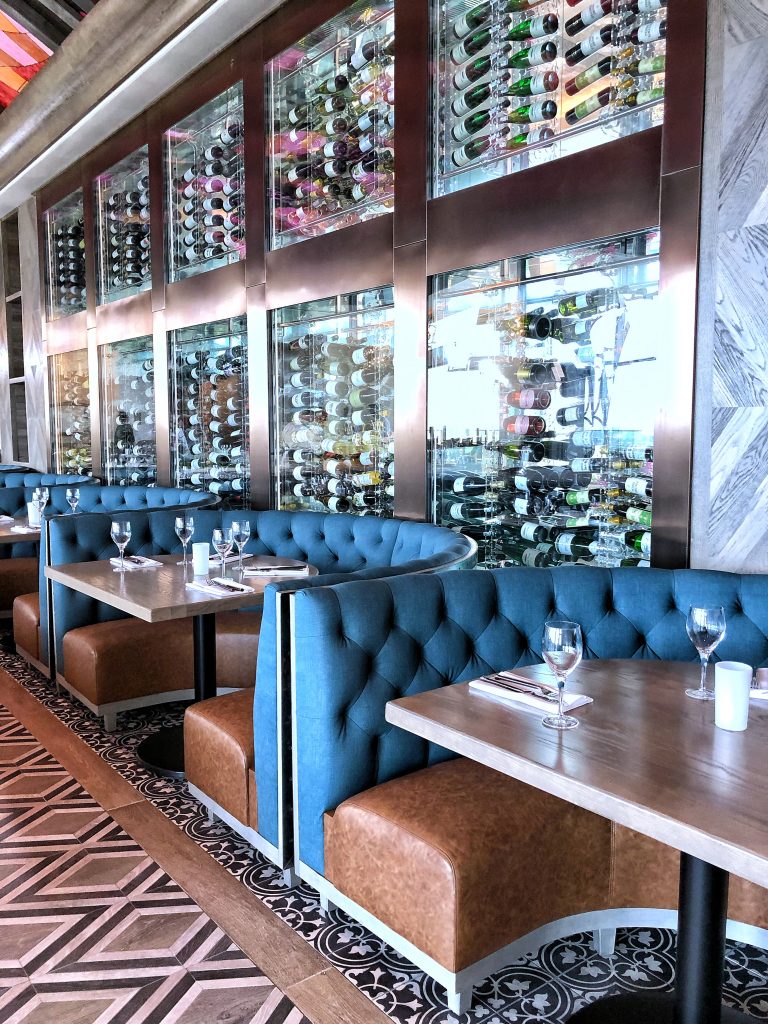 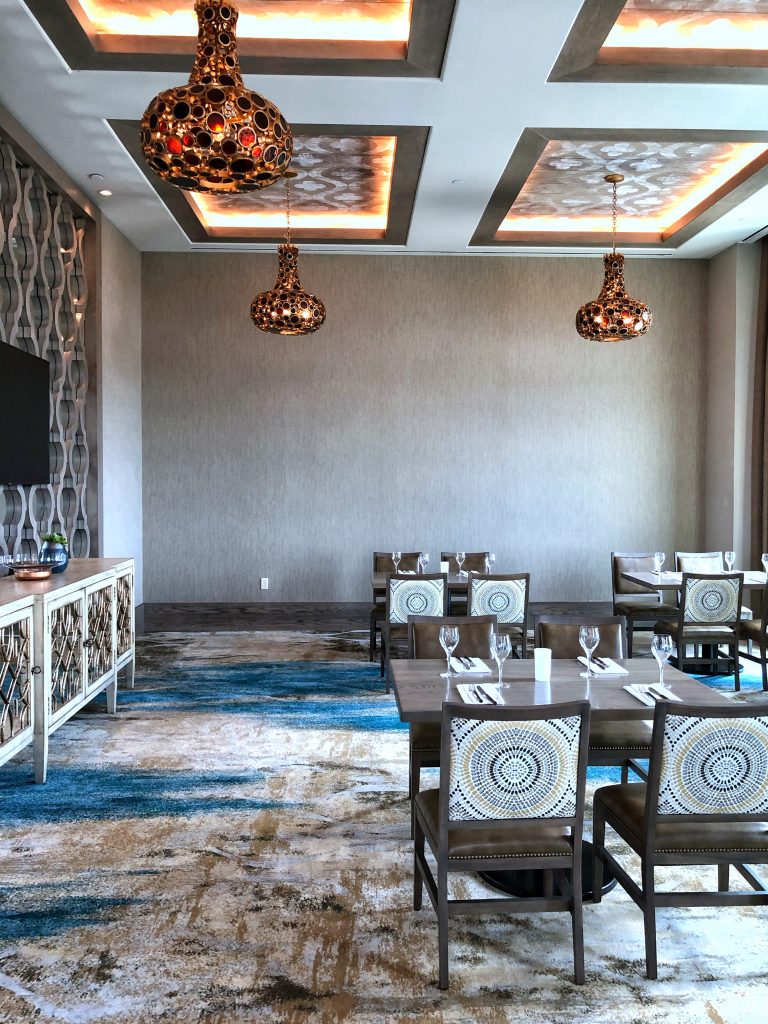 We began our evening at the neighboring Dahlia Lounge with vegan tapas and cocktails. You can read my full  review of this experience here: What’s Vegan at Dahlia Lounge at Disney’s Coronado Springs Gran Destino

The wine and cocktail list is extensive with several signature libations. The servers are very knowledgeable about everything on the menu so just ask.

One of my favorites items here is the appetizer of Pan con Tomate. Smashed tomatoes and garlic, salt and pepper, on thick, crusty bread. It is so delicious. 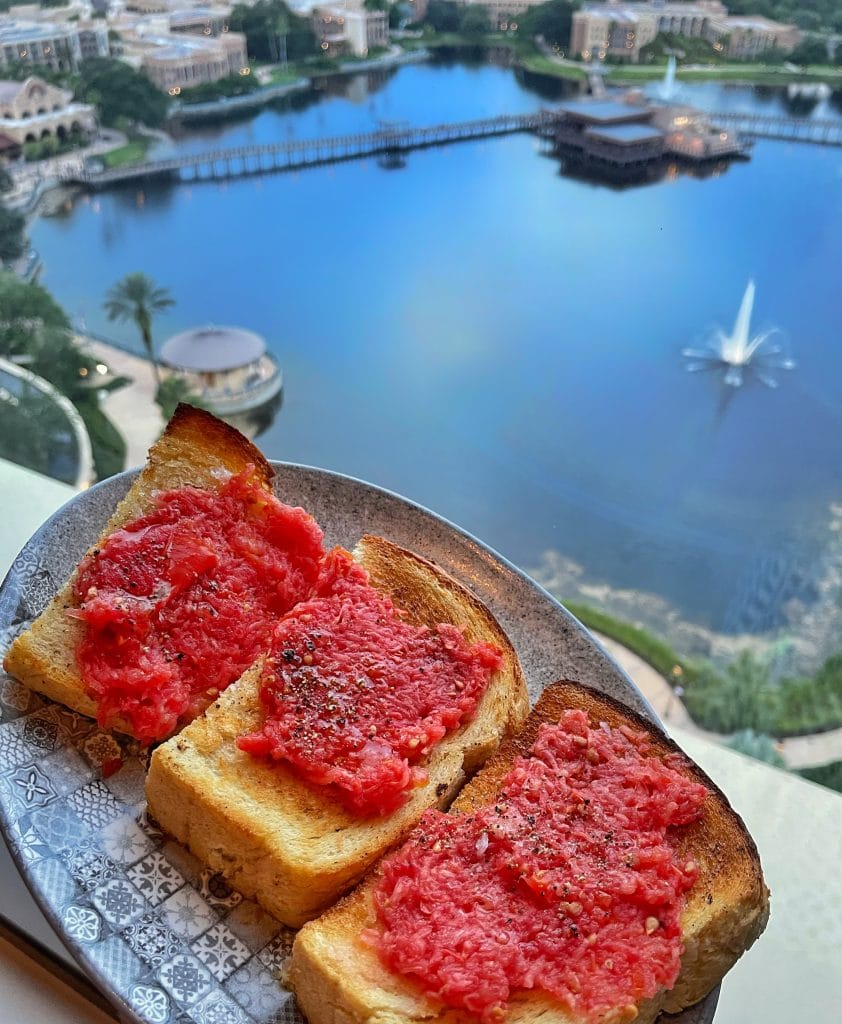 Also available on the appetizer menu for vegans are the Aceitunas Marinated Olives with citrus, garlic and crushed red pepper. They are not noted as vegan with the plant-based leaf logo, but they are confirmed vegan. 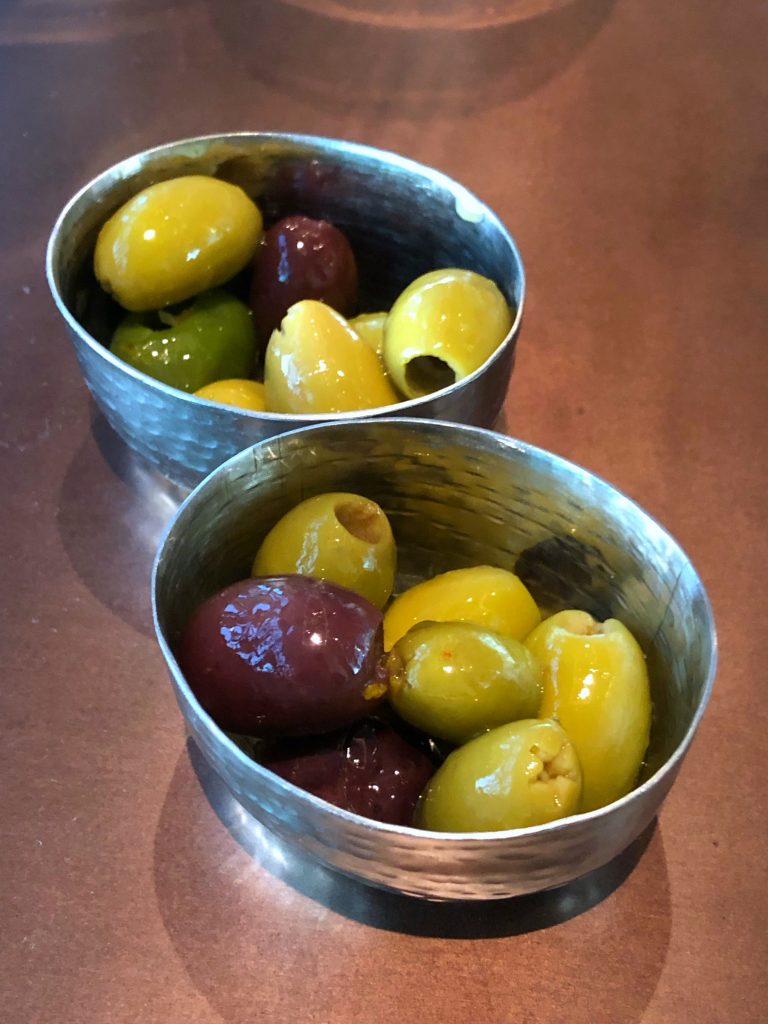 Next up, the vegan entree.

Prior to reopening, Toledo offered one of the most unique vegan options in Walt Disney World. The Plant-based ‘Seafood’ was described as Chefs’ vegan interpretation of a classic seafood presentation with crab cakes, calamari, scallops and citrus-infused couscous.

The “crab cake” was a blend of jackfruit, hearts of palm and dried seaweed to give it that from-the-sea flavor. The “scallops” were royal trumpet mushrooms which were scored and seared. The “calamari” were made from the same mushroom, breaded and fried. The “ceviche” topping on the couscous was also made from mushroom.

You may notice a theme in the plating of both of these dishes. The sauces are literally splattered on the plate. This is intended to imitate paint being splattered onto a canvas. A nod to Dali.

Sadly, this dish is no longer on the menu. They said they aren’t sure if it will return but they are testing out the cauliflower to see how it goes.

What’s now available is the Brick Oven Cauliflower ($30). Now I know this doesn’t sound exciting. I wasn’t super thrilled about it, then, I tried it. The sauces and flavors here just come alive and are completely worth ordering in my opinion. As you can see, the nod to Dali is still there in the plating: 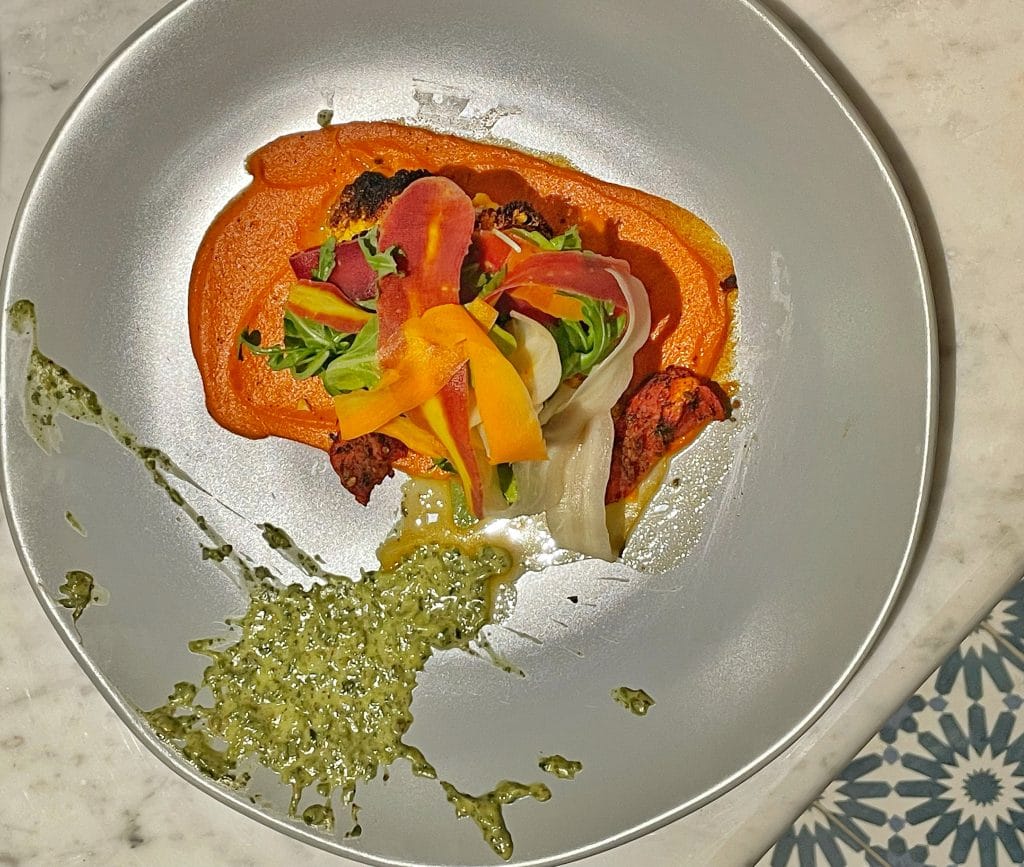 The brick oven roasted cauliflower is served on a bed of romanesco sauce, with roasted tomatoes (so full of flavor I questioned if they were tomatoes!), topped with pickled rainbow carrots. The second sauce is a pistou of spinach, asparagus, and artichoke. 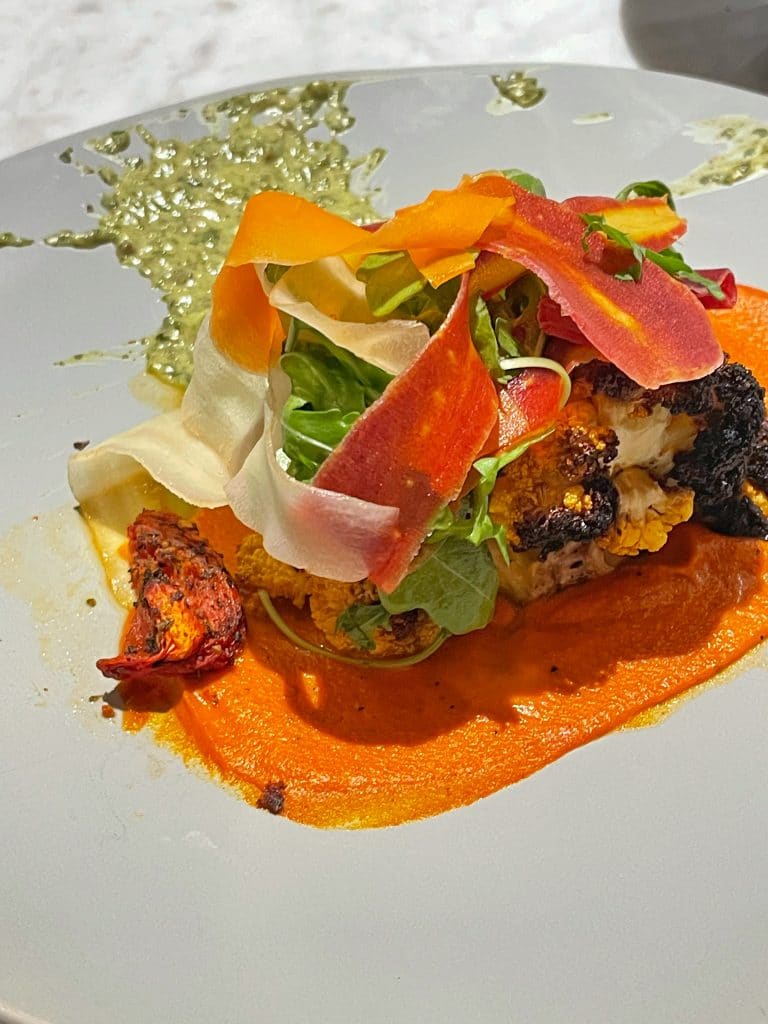 The sauces make the dish, and honestly, I enjoyed it more than I did the $34 rigatoni at Citricos recently and this is completely vegetable forward with no plant-based meats. 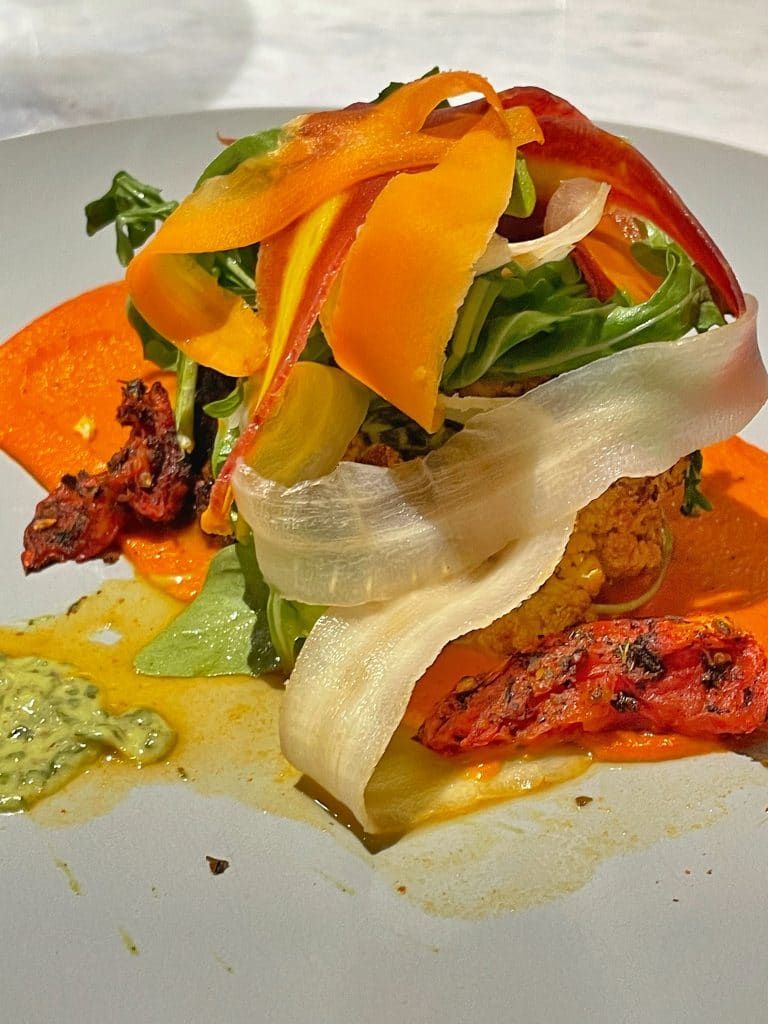 In addition to the main entree, there are quite a few side items we can enjoy. We have the Blistered Shishito Peppers ($8), fried Brussels Sprouts ($8)and Braised Gigante Beans ($8). 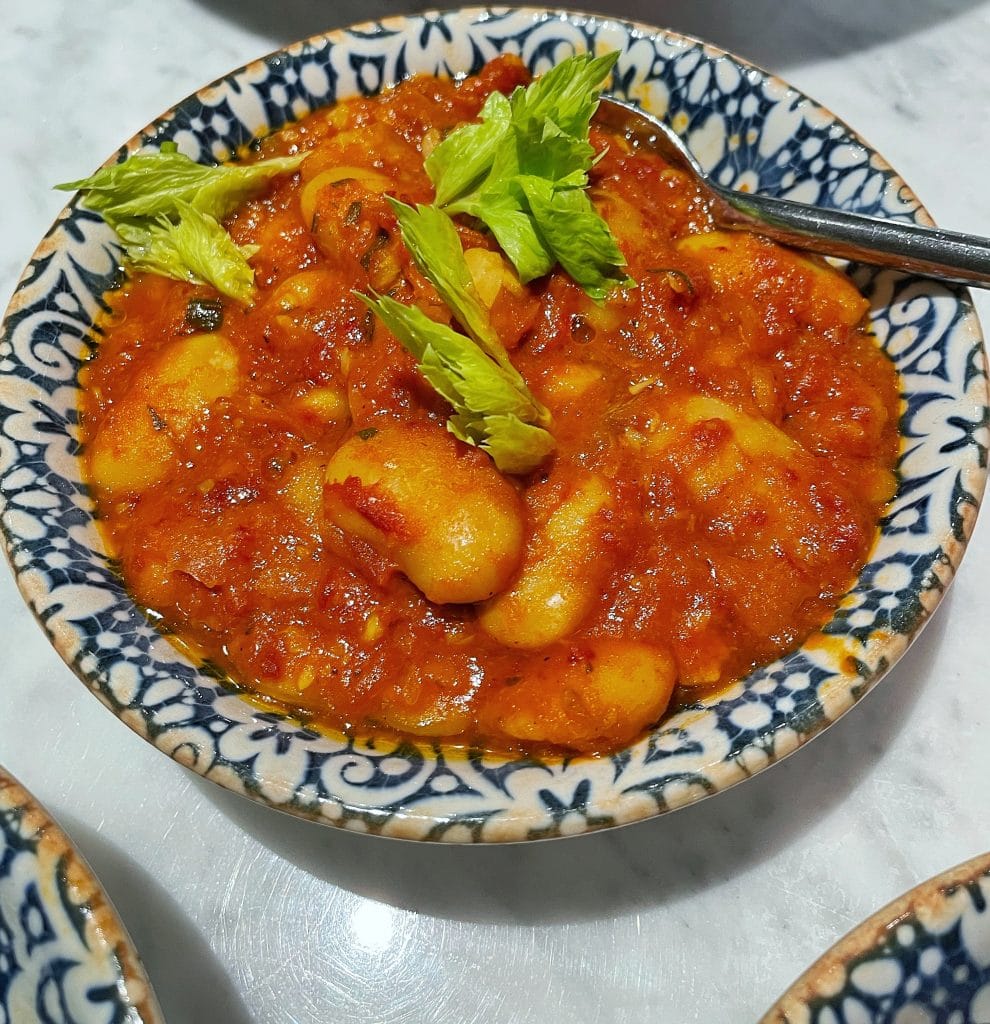 I would personally not order the beans again. They were lovely tasting, but these kind of beans are not my thing. If you enjoy kidney-texture beans in tomato sauce, you’d probably want to order these. 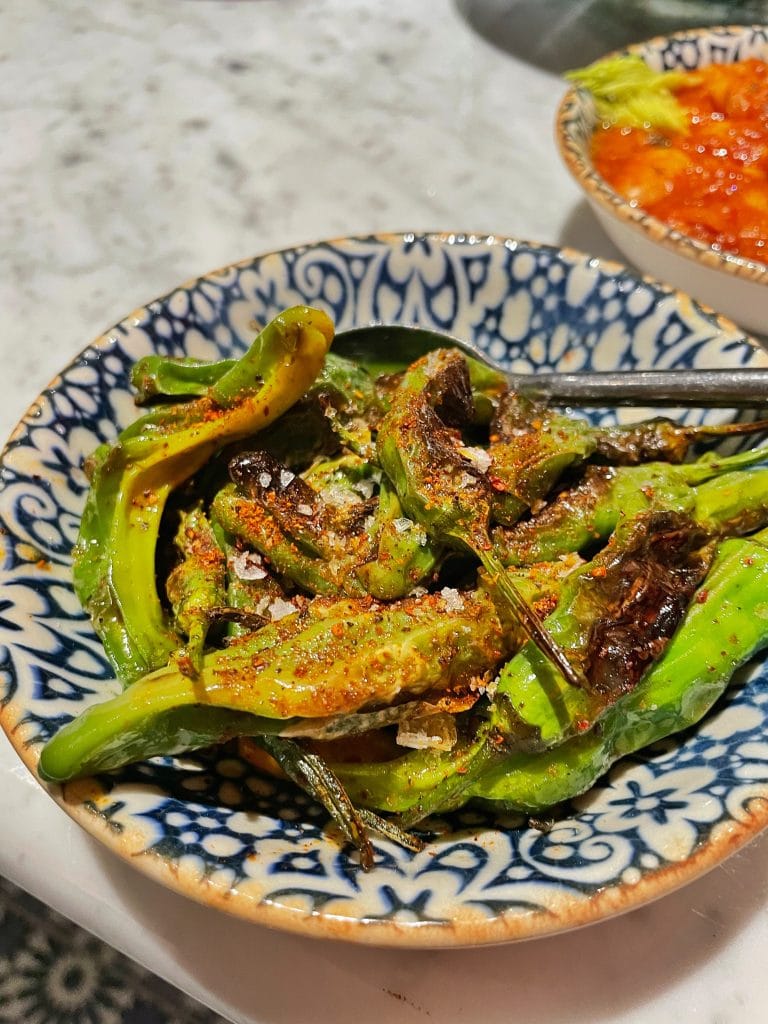 If you like these kind of peppers, and you’re a little adventurous, I’d recommend these. A smaller one I tried was pretty spicy, but the larger ones weren’t too bad. The spices on top are delicious as well. A fun side item. 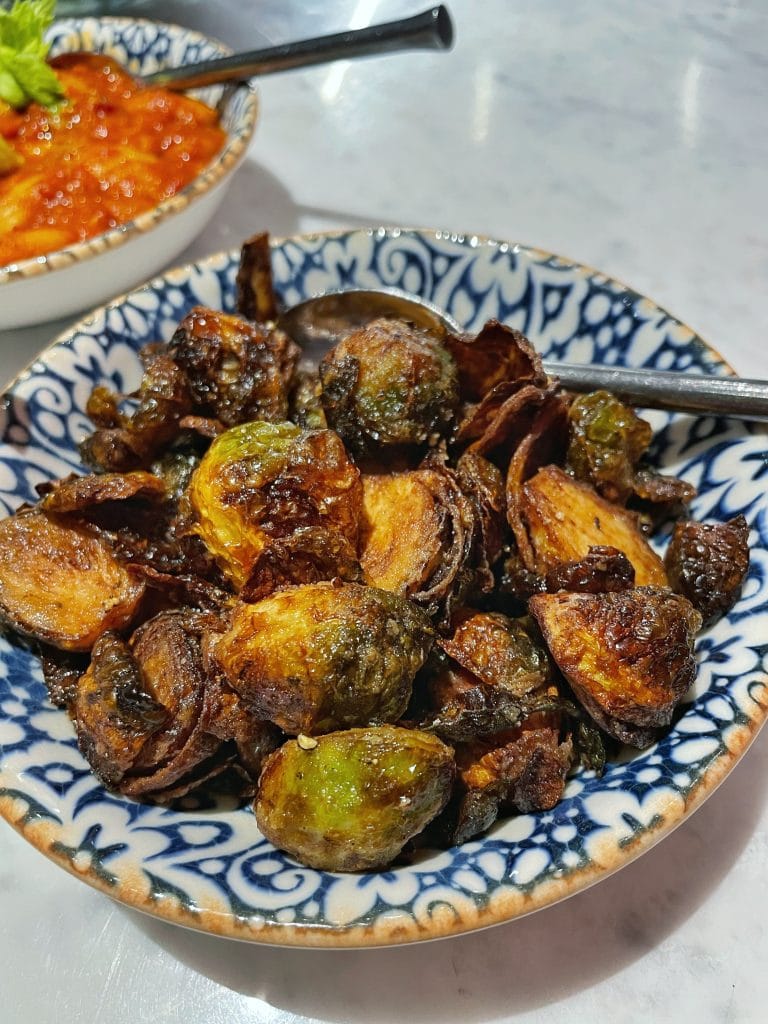 The Brussels sprouts were a hit. A must-get, even if you aren’t a huge Brussels sprout fan. They are deep fried, with a simple sauce of agave, salt and pepper. So, so good. Now on opening night, we were told that the deep fryer used to fry these had fried chicken wings 4 days prior. They are not sure if that is going to be the norm or if they will be using a separately dedicated fryer (since it was opening night). If you have issues with this, be sure to ask, and if they are not able to accommodate, they CAN cook them in the oven vs. frying. They just won’t be as crispy.

There are also a few modifiable sides, but I’m not sure they’d be worth getting with these great options. I’m just pointing them out in case anyone wants to try them. The Roasted Cauliflower is served on a bed of pureed cauliflower, which has dairy in it. So to make them vegan, you’d basically just be getting more plain roasted cauliflower. The Patatas Bravas again are served with sauce that contains dairy. If you order them without the sauce, you’d just be getting fingerling potatoes. The Olive Oil-Potato Puree has Manchego cheese with it, and the Roasted Tomato-Bomba Rice is cooked in chicken stock, so both of those are off-limits.

The dessert option is the same as prior to closing, with one exception. The berry sorbet is now made with almond milk instead of soy milk. Chocolate-Avocado Mousse ($10) a plant-based dessert with strawberry-basil sorbet, coconut crumble, fresh berries and aquafaba meringue. 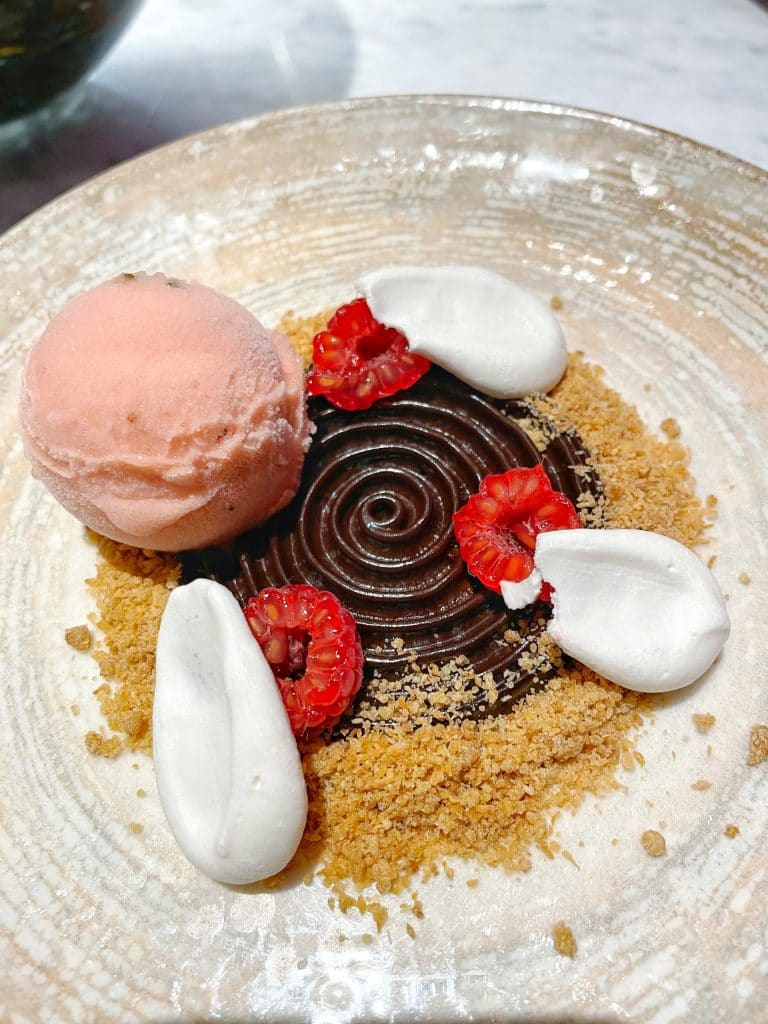 Our dessert last night was served without the edible flower, but just as delicious. You don’t get a lot for $10, but what you do get is full of delicious flavors and textures. The mousse is super creamy and chocolatey. The sorbet is light and fruity and the coconut crumble is crunchy and flavorful. The aquafaba meringue is light and sweet.

I really enjoyed my visit on reopening night. Everything we had was so delicious and packed full of flavor. Combine that with the gorgeous atmosphere and Toledo continues to be one of my favorite places on property. I would be very happy to order the Brick Oven Cauliflower with Brussels Sprouts and the dessert. The service was also wonderful, our server knew the menu inside and out and was so quick to ask for clarification.

You can spy both EPCOT and Magic Kingdom fireworks from the windows, or head out to Dahlia lounge to watch EPCOT’s if you want a better view. As day transitions in to night and the natural light fades from the restaurant’s interior, the stained glass ceiling comes to life with color changing hues. A beautiful spot to enjoy some wonderful food and drinks! 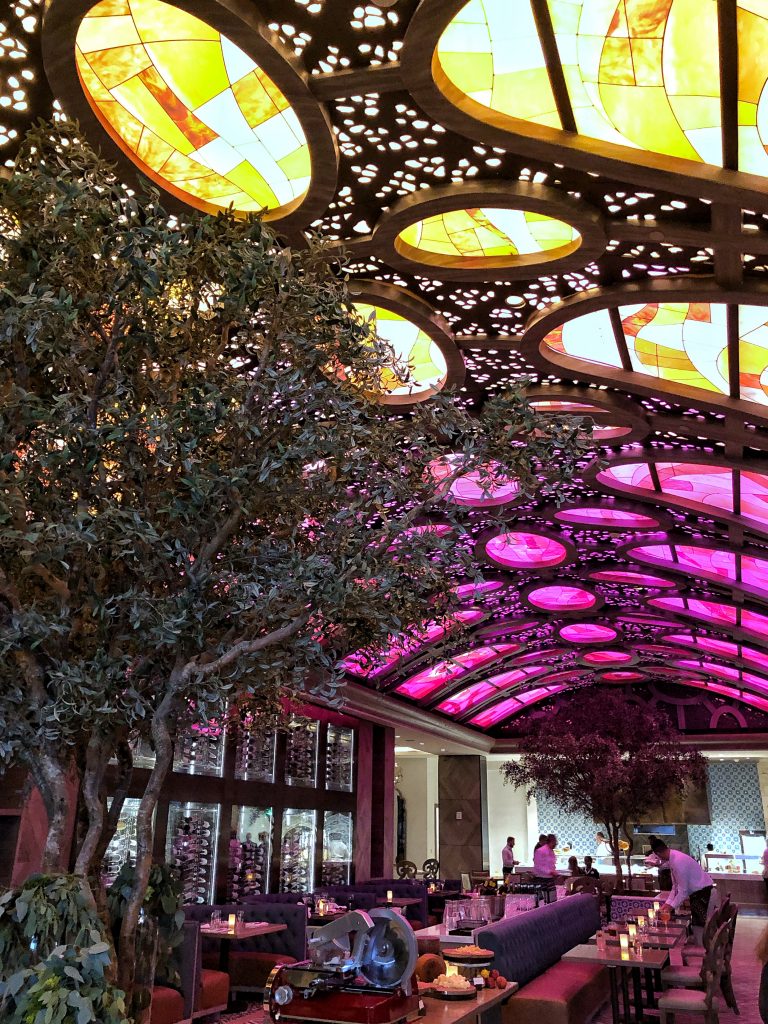 What do you think of these new additions to Walt Disney World’s vegan Disney food options? The stand out’s for me were the “crab cake”, tomato bread and dessert. Will you be making a reservation at Toledo on your next visit?

See what’s poppin’ at the lounge just next door. Check out this review – What’s Vegan at Dahlia Lounge at Disney’s Coronado Springs Gran Destino prior to reopening: 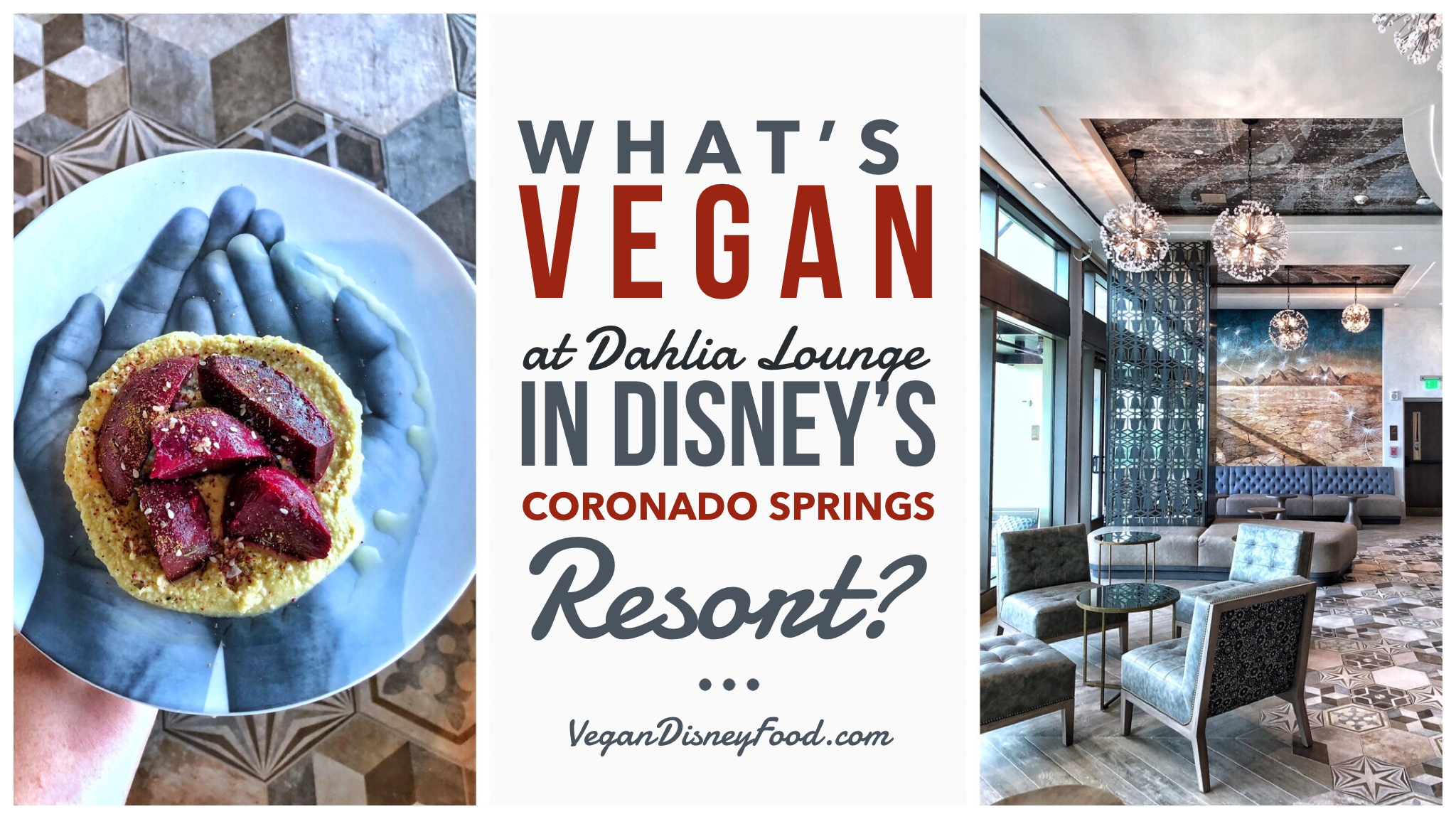 WANT TO REMEMBER THIS OPTION? Save the “What’s Vegan at the NEW Toledo Restaurant in Disney’s Coronado Springs Resort?” pin to your favorite Pinterest board.