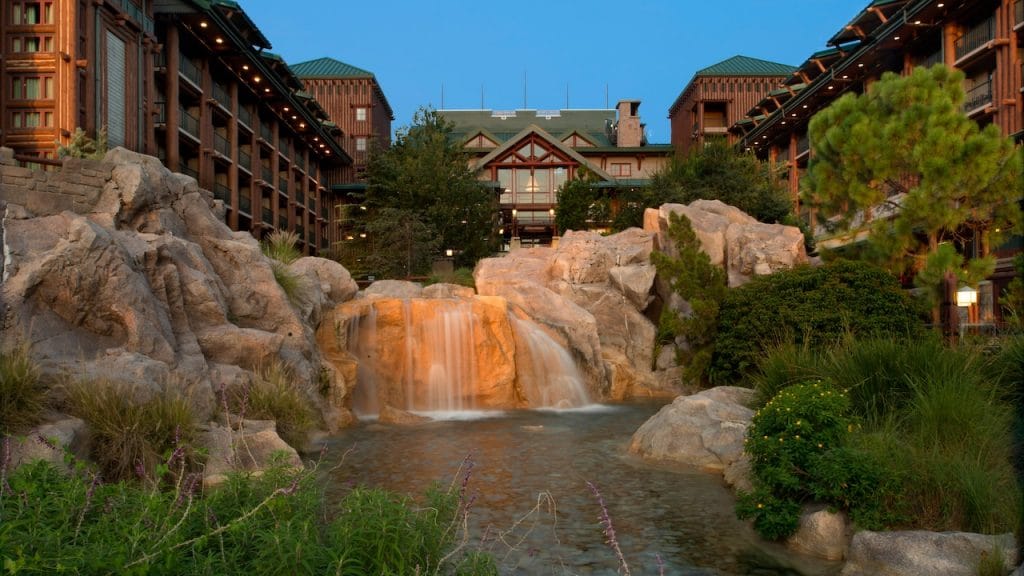 Artist Point used to be a signature dining spot known for its gourmet treatment of American favorites and was a celebration dinner location for my husband and I as well. When it switched to character dining and a prix fixe menu, I was pretty disappointed, so I’d actually never dined there. Until now! Taking over this site a year ago meant I am now trying all of the places I may not have been to in a while or at all, and in this case, I’m actually really glad I did.

Artist Point Storybook Dining reopened on December 16, and we visited a few days later to check out all the vegan options for the character dining dinner. I was pleasantly surprised and can’t wait to share my photos with you below.

What surprised me most I think, was the changes that had been made to turn it into a “Storybook Dining” themed area. I guess because I had been silently protesting the change, I didn’t really pay attention to the updates. Seeing the twinkling tree limbs around the dining room, along with unique lazy-Susan style twinkling trees that food is served on at the table, was a delight. The best part is, they have kept the original artwork that made us love Artist Point so much to begin with, so it all just blends together nicely.

Of course, since the reopening is still during pandemic times, there are some changes to the way the dinner is presented. Snow White is joined by Grumpy and Dopey, as well as the Evil Queen as the characters you’ll see. However, they are very physically distanced from your table. They appeared entirely across the dining room for us as you’ll see below. In addition, there is a “Happy Song” dance that the dwarfs and Snow White do around the dining room, and the characters are all announced before they appear so you can be prepared with cameras.

Now I will say, our particular table location was not the best. We had a party of 5, and for some reason we were seated at the far left corner of the restaurant, spread across two tables of 4, so we had so much extra space but also it was pretty dark and we couldn’t see the goings-on in the rest of the dining room. Also, each time someone came out, cast members were standing by the doorway so it really blocked most of our views. So if I were to return, I would probably request a table in the middle of the dining room or at least closer to the windows to see more of the restaurant itself as well as the character appearances. That said, it was a good mix of character-to-eating time and I didn’t feel overwhelmed by characters stopping by too many times.

Now lets get to the vegan options at Artist Point Storybook Dining! The regular menu features shared all-you-care-to-enjoy appetizers for the table, then you choose an entree, and the desserts are also shared. The vegan Artist Point options include the same multiple appetizers, one entree and dessert trio.

For vegans, the appetizer options are Mushroom Consommé (rather than mushroom bisque on the regular menu), Summer Rolls, and a Beyond meat meatball served on cranberry sauce. The regular menu offers shrimp cocktail and a turkey tart of some sort. 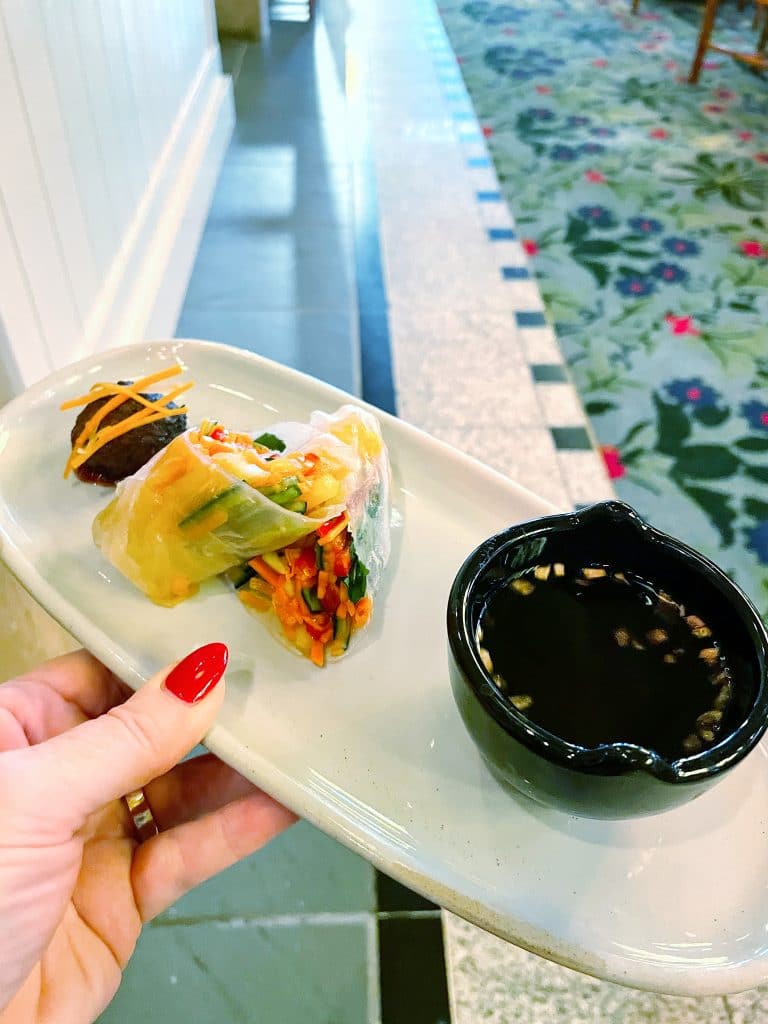 The Mushroom Consommé is good and has a nice mushroomy flavor, but nothing to write home about here. The Summer Rolls are really good and the sliced vegetables inside have a slightly pickled flavor. They were fresh and delicious, a nice option. The Beyond meatball tasted like Beyond meat rolled into a ball, nothing really stand-out there either. But you can get more of anything you want of these appetizer options, so if one (or all) strikes your fancy, you can have seconds (or thirds or fourths).

Next up, you choose an entree. Naturally, there is only one vegan option on the menu, but you actually can get a modified pasta that they have for the kids menu. Regular spaghetti with marinara sauce. The gnocchi (called “A Stroll Through Nature” on the menu) is vegetarian, but cannot be modified to be vegan because the gnocchi themselves contain dairy. This is sad because I do love gnocchi and having two unique vegan options at Artist Point would be amazing. Fortunately, the vegan entree is actually pretty good!

The Sorceress Spell of “Tricken” Chicken features a gardein-style chicken patty served on a bed of pureed cauliflower and roasted spiced cauliflower florets, with vegetable jus and cranberries. The menu description of this vegan option notes “Herb-crushed potatoes, snap peas and vegetable jus” but that is incorrect. Our server told us they previously had root vegetables with the chickn. So this may be a seasonal change or just an incorrect listing, but it does match the description of the Brother’s Grimm Herb Chicken which is the non-vegan equivalent. Previous photos of this dish show it atop fingerling potatoes and sliced zucchini and summer squash. 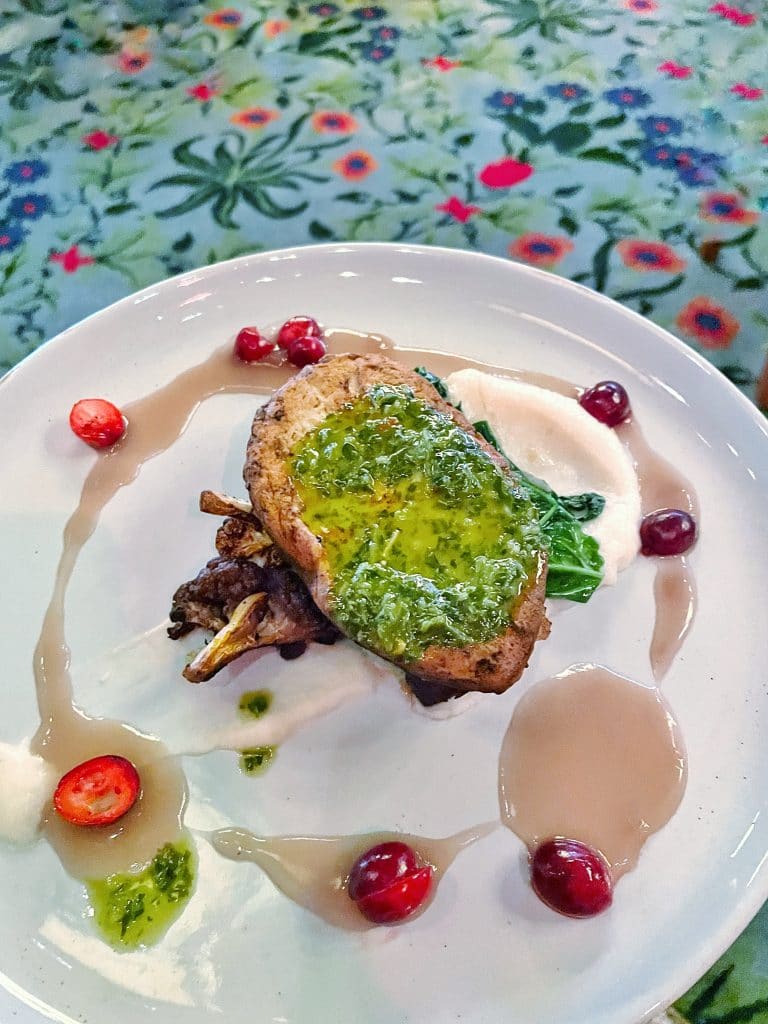 The chickn itself was cooked really well. I’m not a fan of undercooked plant-based meats and this one was nicely roasted with a good crust on it. It was also a nice portion size. 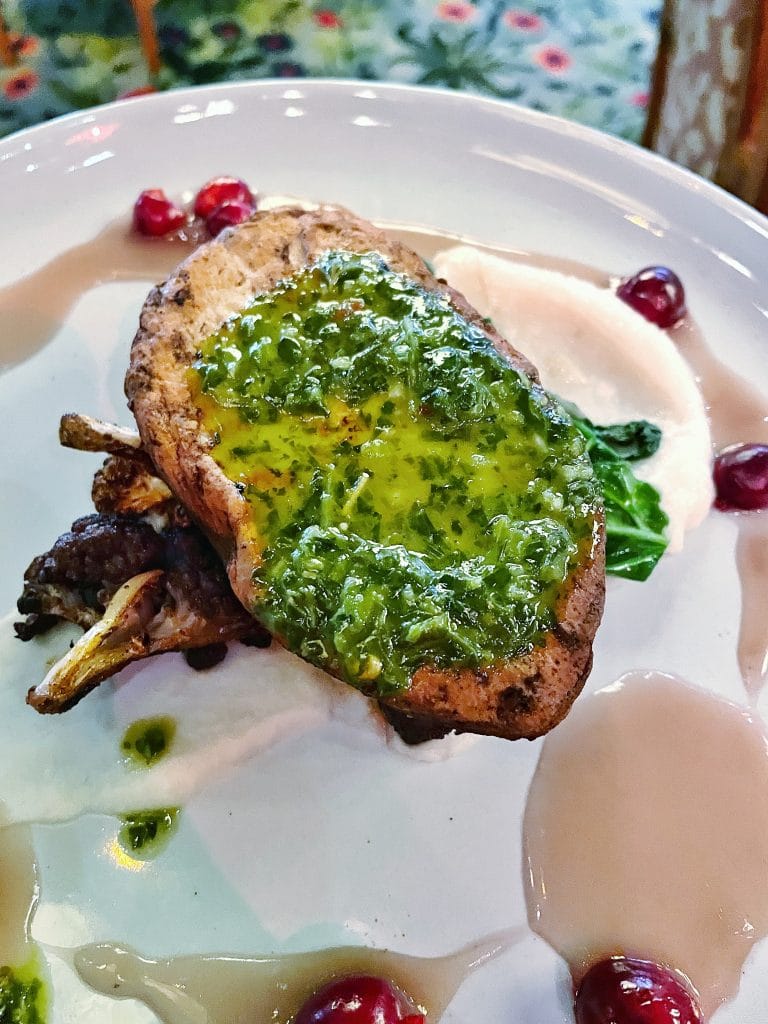 Lastly, we are given a trio of desserts and while the non-vegan offerings are a bit prettier to look at, the vegan ones aren’t too bad either. We have a vegan version of the Snow White’s Goosberry Pie, as well as a vegan version of the “Poison Apple” chocolate mousse. Ours is a “Rotten Apple” as it’s brown and not red. And rather than the “Miner’s Treasures” of cookies and cream panna cotta, we are given a Chia Pudding with mango.

I really appreciated having three separate vegan dessert options. If there is one you don’t like, at least you have some others to try. The Gooseberry Pie was very tart and sweet and a unique offering for sure. The “Rotten Apple” tasted like crushed Oreo cookies mixed with something and wasn’t super exciting. The Chia pudding had unique “Fall flavors” to me, mixed with the tropical mango it was a bit odd, but again, I’m just happy we have options, and I would definitely go back here. In looking at photos from the previous vegan menu options before the closure, it looks like they’ve definitely improved on things. Neither the chia pudding nor the gooseberry pie had topping before and now they both do. 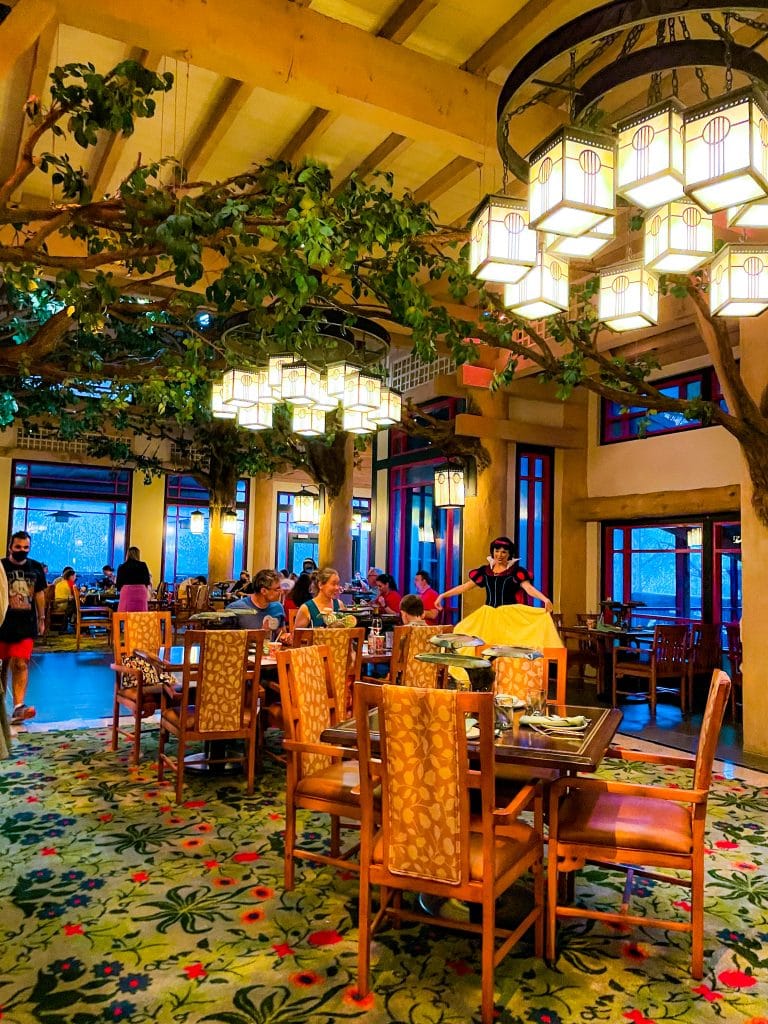 All in all, I had a very enjoyable time and the vegan options definitely made me want to return again. The atmosphere and decor made it a delightful experience. I would rate this a solid 4 our of 5.

You can also watch our video review to see more of the vegan options at Artist Point Storybook Dining at Disney’s Wilderness Lodge in action! We’d love a thumbs up and if you subscribed to our channel for more Vegan Disney Food reviews.

Let us know if you’ve tried Artist Point’s Storybook Dining in the past or plan to now that it’s reopened.