We were surprised to find so many options at Tiffins in Disney’s Animal Kingdom theme Park that were vegan or easily modifiable to be vegan friendly. It has become one of my favorite spots to celebrate my birthday or anniversary because I love the flavors and atmosphere so much.

We’ve dined at the full service restaurant Tiffins several times and this review is updated from our most recent visit in December.

You can find Tiffins on the outskirts of Pandora – The World of Avatar just on the edge of Discovery Island. 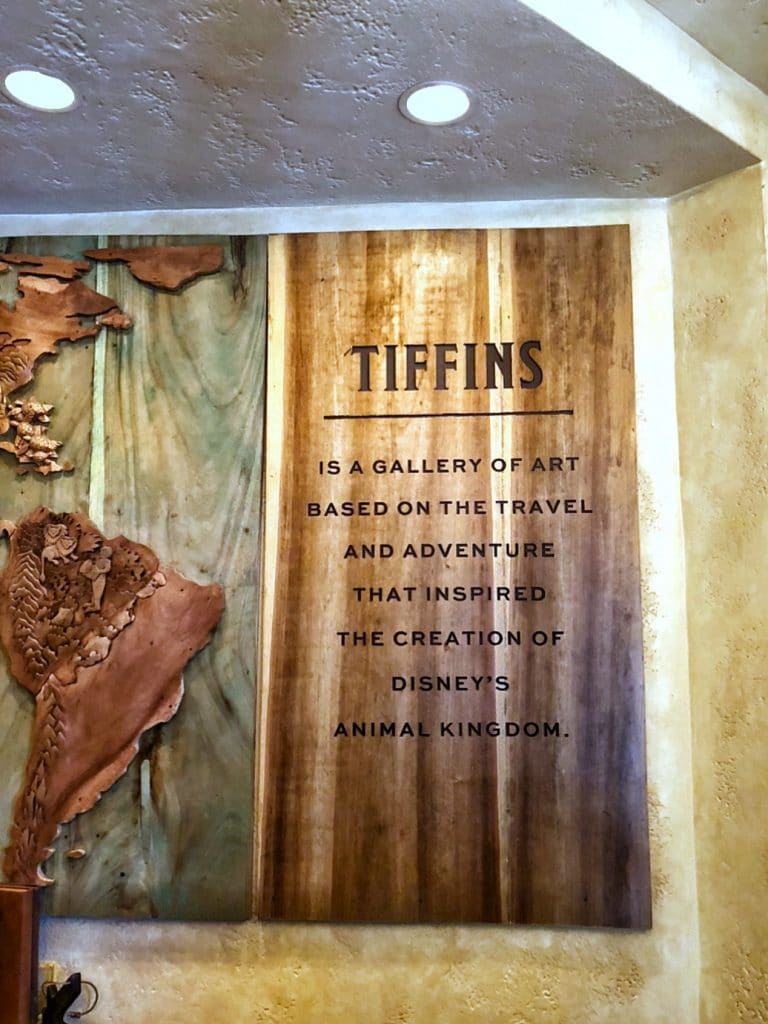 Tiffins is filled with artifacts that inspired the creation of Disney’s Animal Kingdom theme park.

These pieces are housed in three distinct dining rooms. 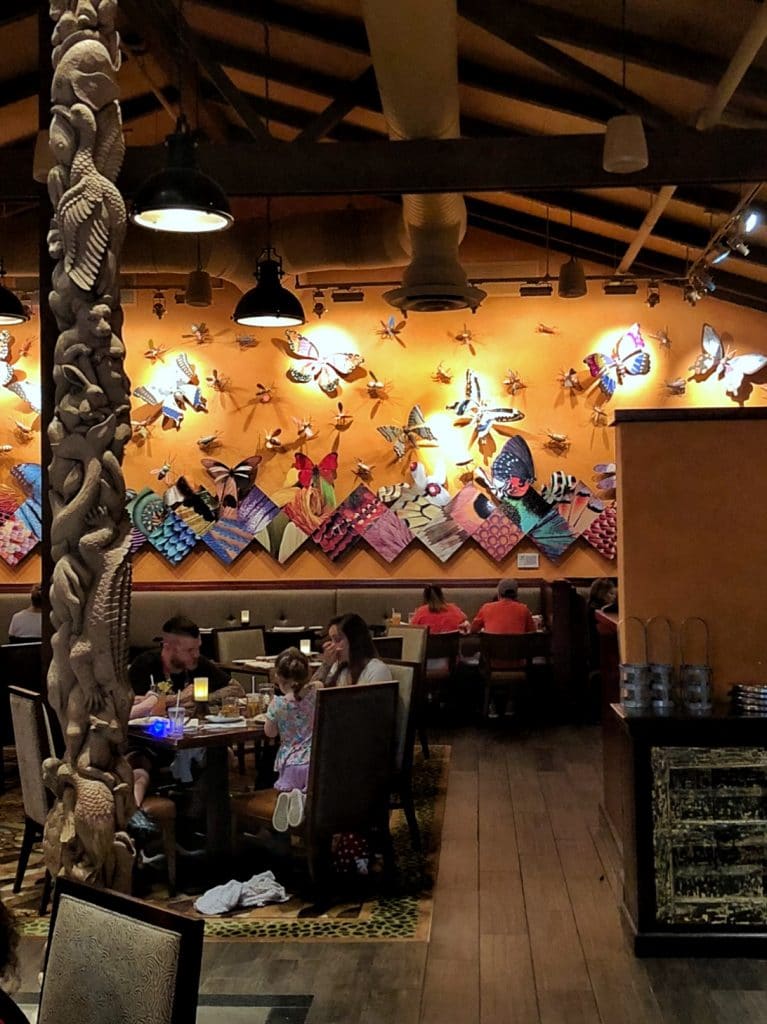 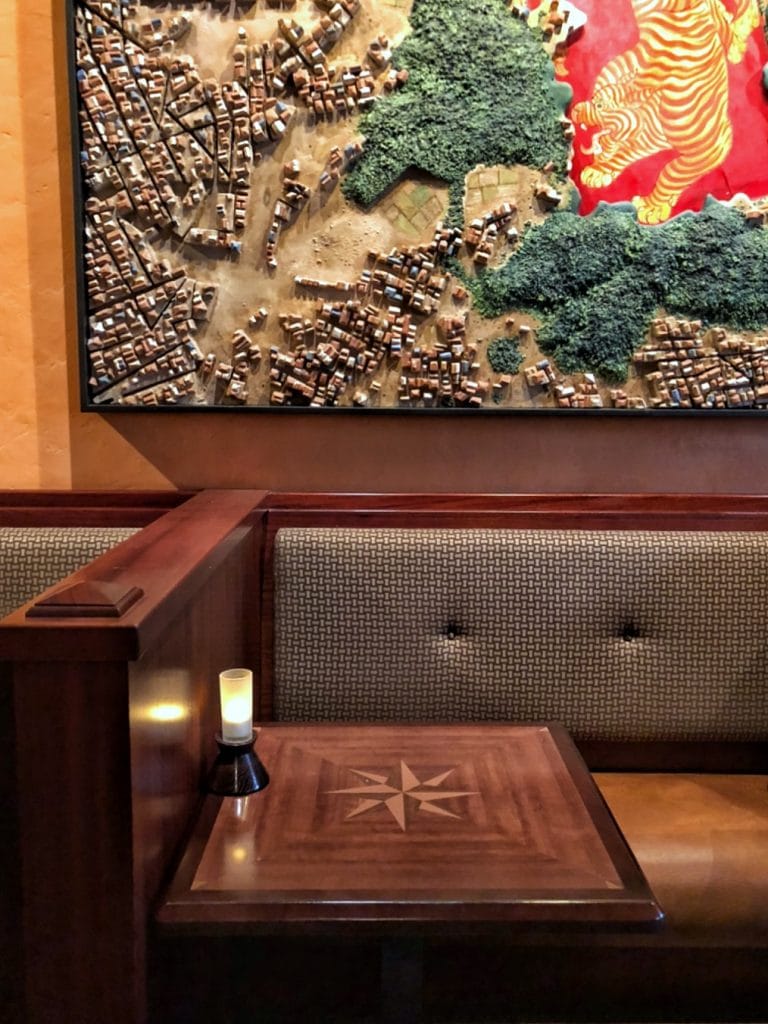 There is something interesting to see on every wall in every room. 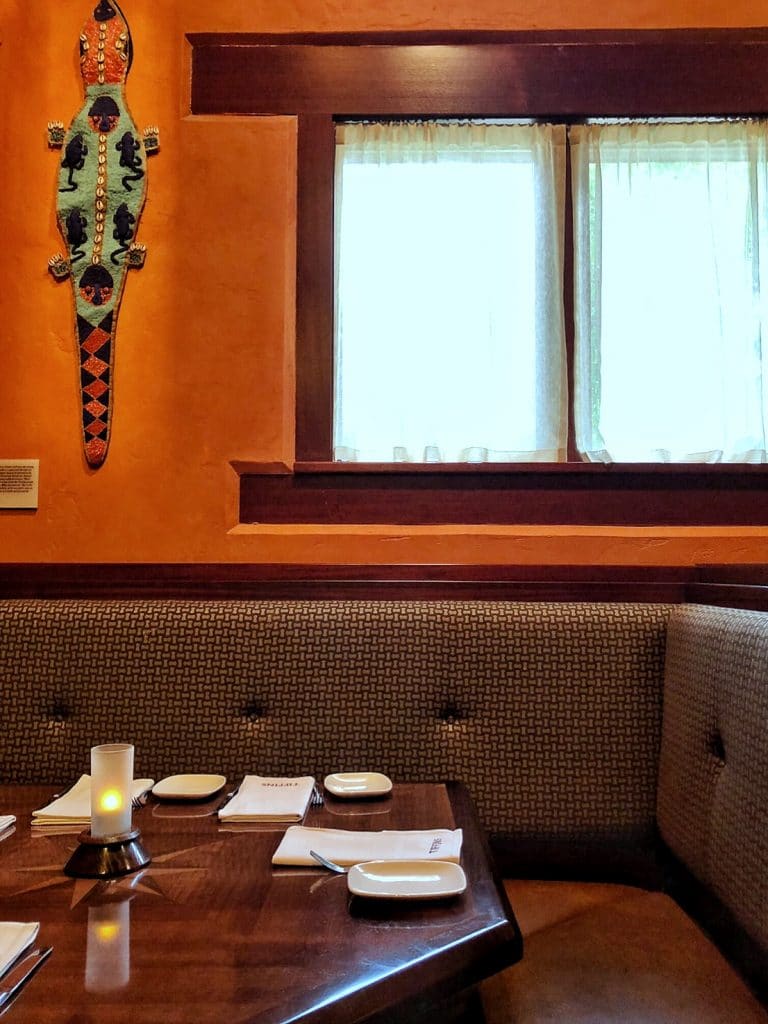 The color scheme inside the restaurant is inspired by Asia and Africa and is a mix of bright colors as well as dark wood and fabrics. 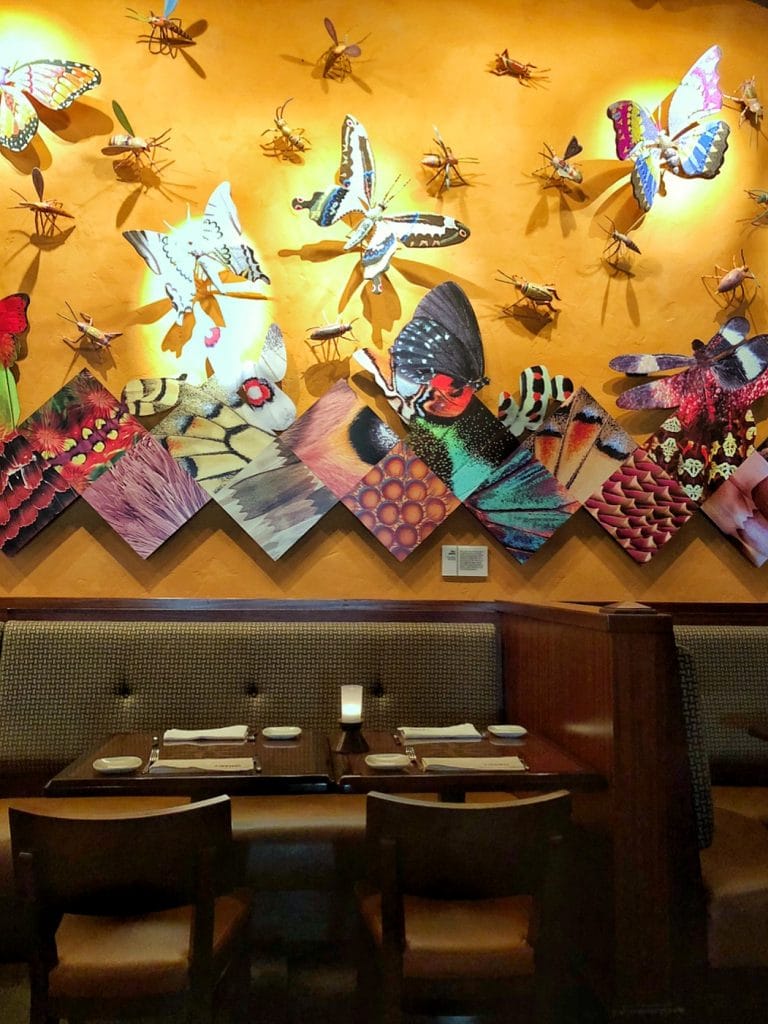 This is offset by the crisp white napkins and flatware. 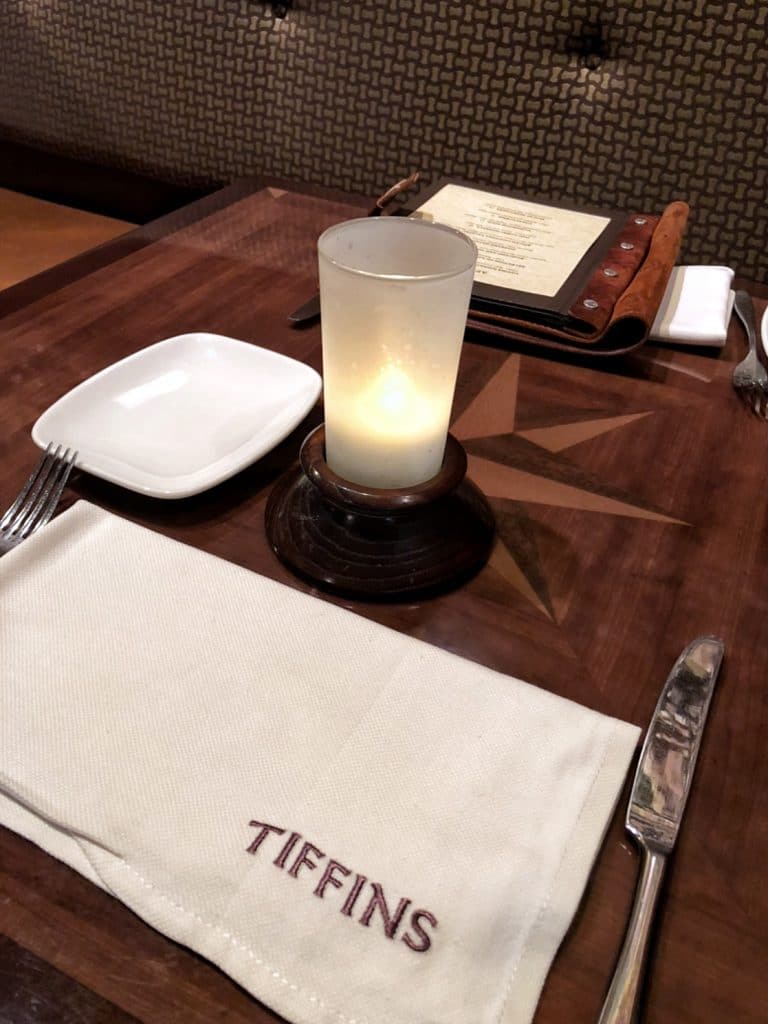 There are several vegan friendly dishes on the “Appetizers” section of the Tiffins menu.

The obvious choice being the option that is clearly marked with the plant based leaf logo – that means it’s vegan! 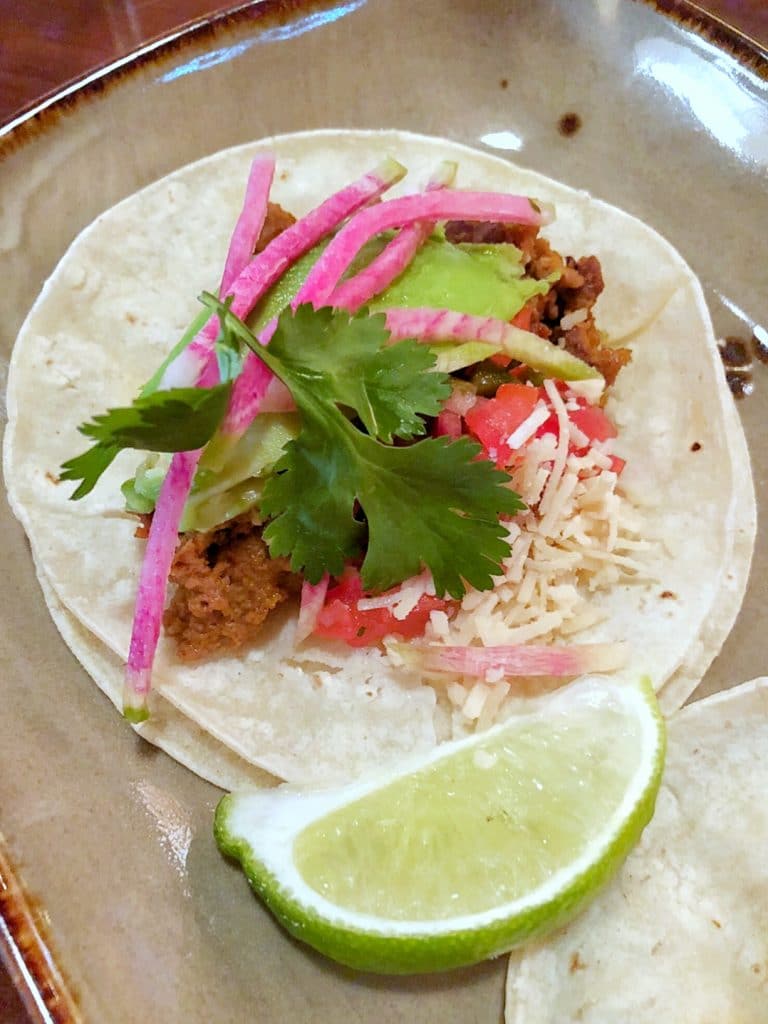 It comes with two plant based tacos filled with vegan tinga, avocado, vegan cheese, cilantro and thinly sliced watermelon radish on corn tortillas. These are phenomenal and definitely worth ordering. 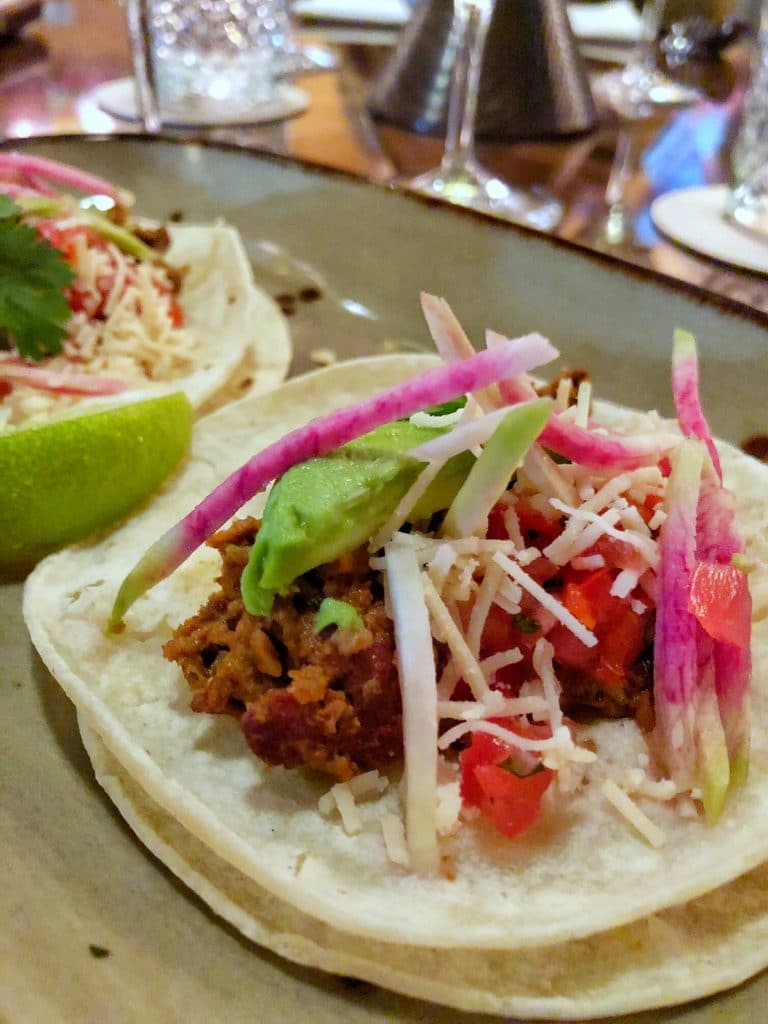 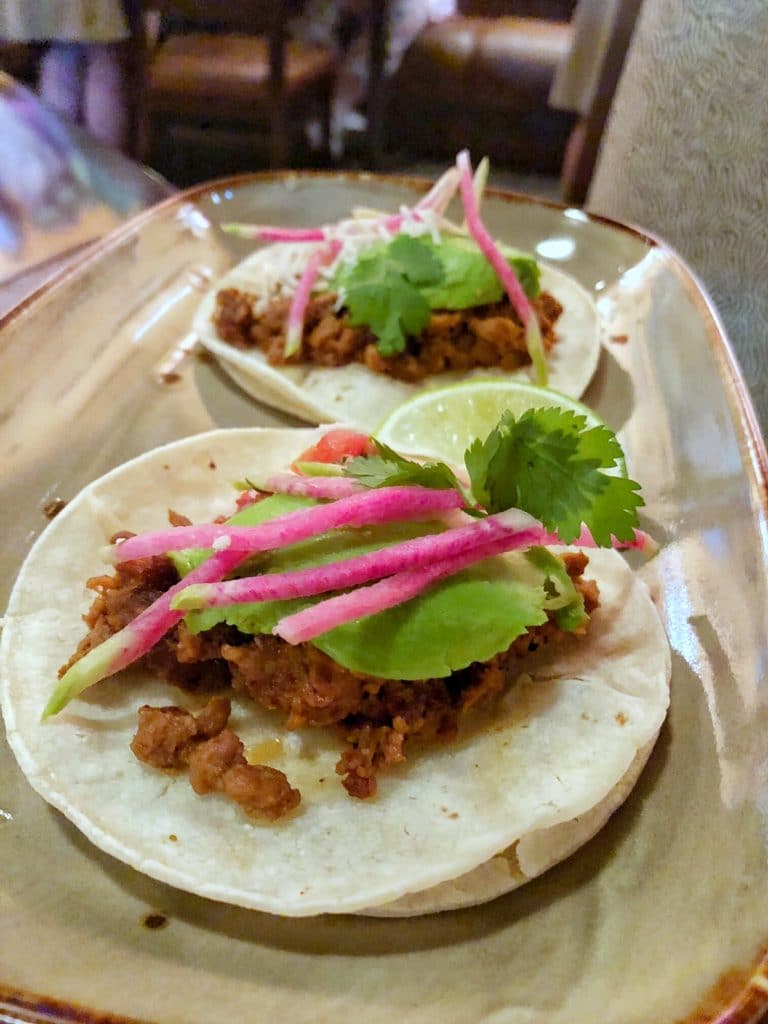 We were also able to easily modify the Tiffins Signature Bread Service to be vegan ($12).

The vegan spreads include a red pepper hummus and a ginger pear chutney. You’ll need to omit the coriander yogurt as it is not vegan. 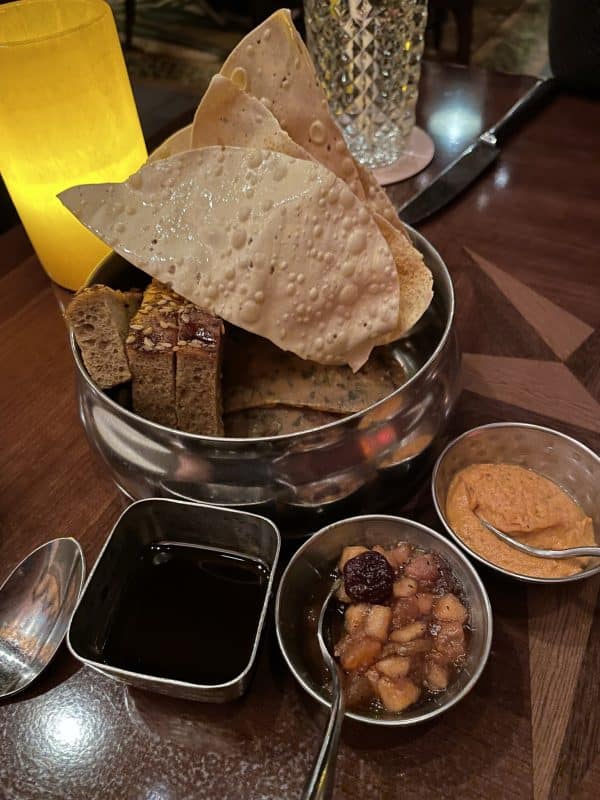 The breads remain the same and include a trio of pomegranate focaccia (thicker cut bread), curry papadum (crunchy white) and methi paratha which is the thinnest option resembling a tortilla.

If the paratha looks strangely familiar that’s because it’s the same bread that was once served with the plant based Farmhouse Meatball at the Epcot International Flower & Garden Festival. It’s also currently being served with the Vegetable Curry Crew Stew at Skipper Canteen.

If you want something a bit lighter consider modifying the Land Salad ($12). We recently reported on this new salad option along with a modified Tofu Poke Bowl at the Nomad Lounge next door. 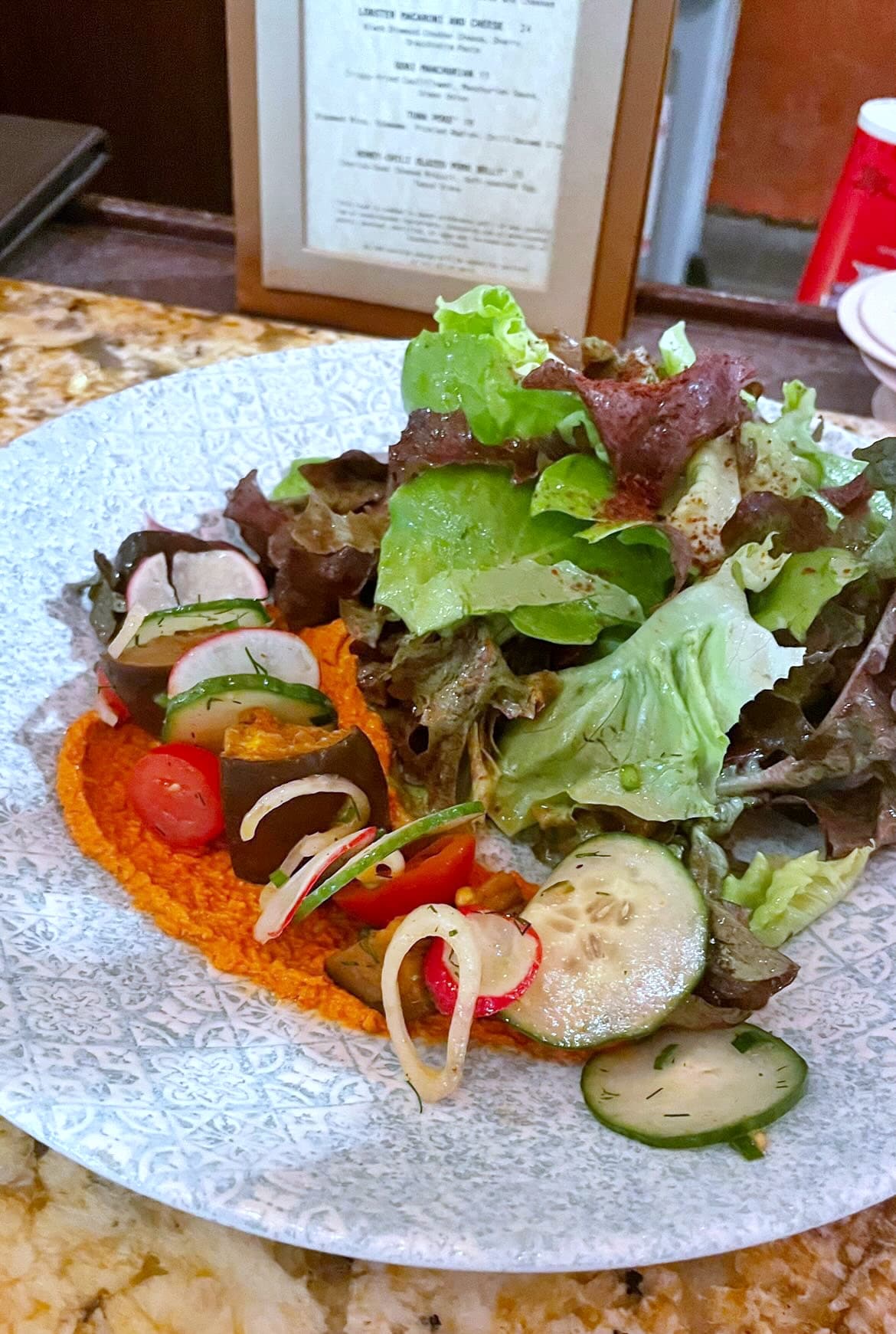 This salad contains young lettuces harvested from the Land pavilion, walnut-rosted tomato muhammara, garlic breadcrumbs (these must be removed as they are cooked in butter), feta (also remove), sumac, and a citrus vinaigrette. 98% of the veggies added to the salad come directly from the Land pavilion.

The Spiced Chickpea Falafel ($10) can also be modified. 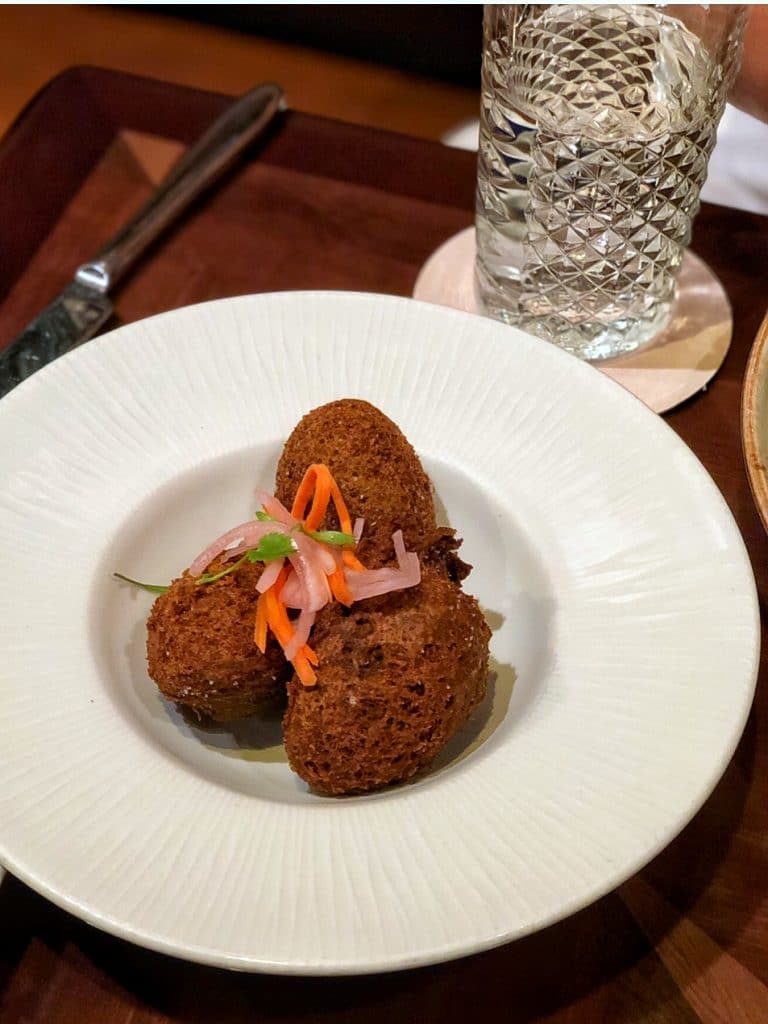 The mint-pistachio pesto is now vegan as is, but omit the cumin scented raita.

Your falafel will come topped with pickled onion, carrot ribbons and micro greens.

These falafel were nice and crispy on the outside and creamy on the inside. 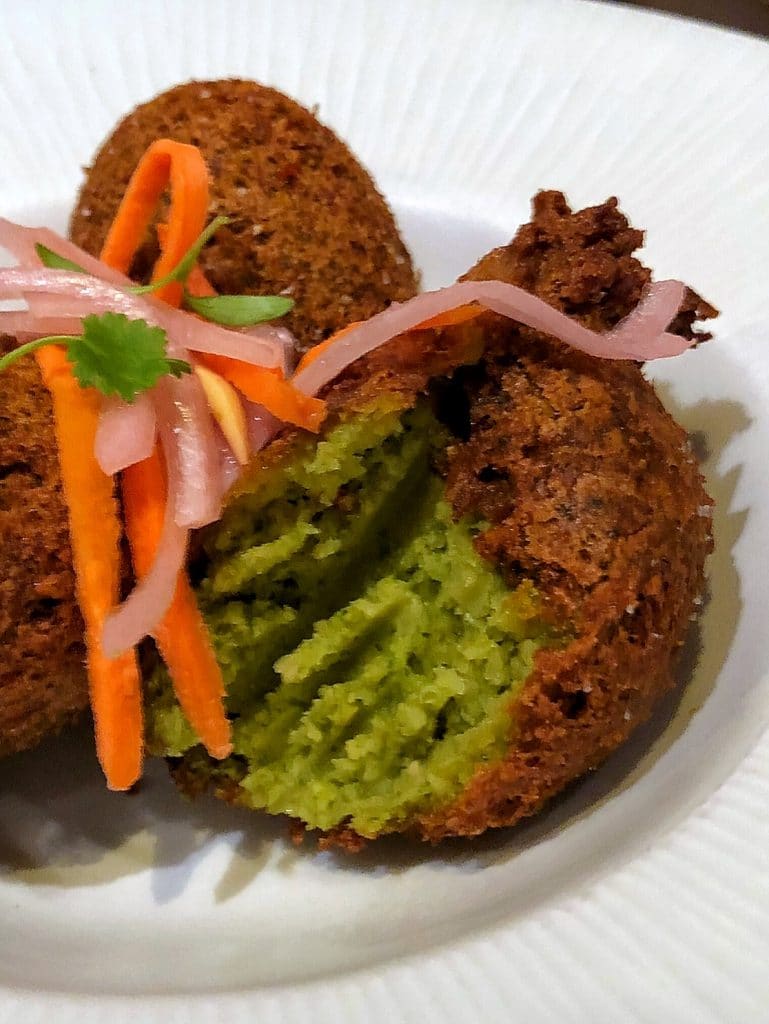 Now that we’re done with the appetizers I have to show you this crazy looking cocktail. 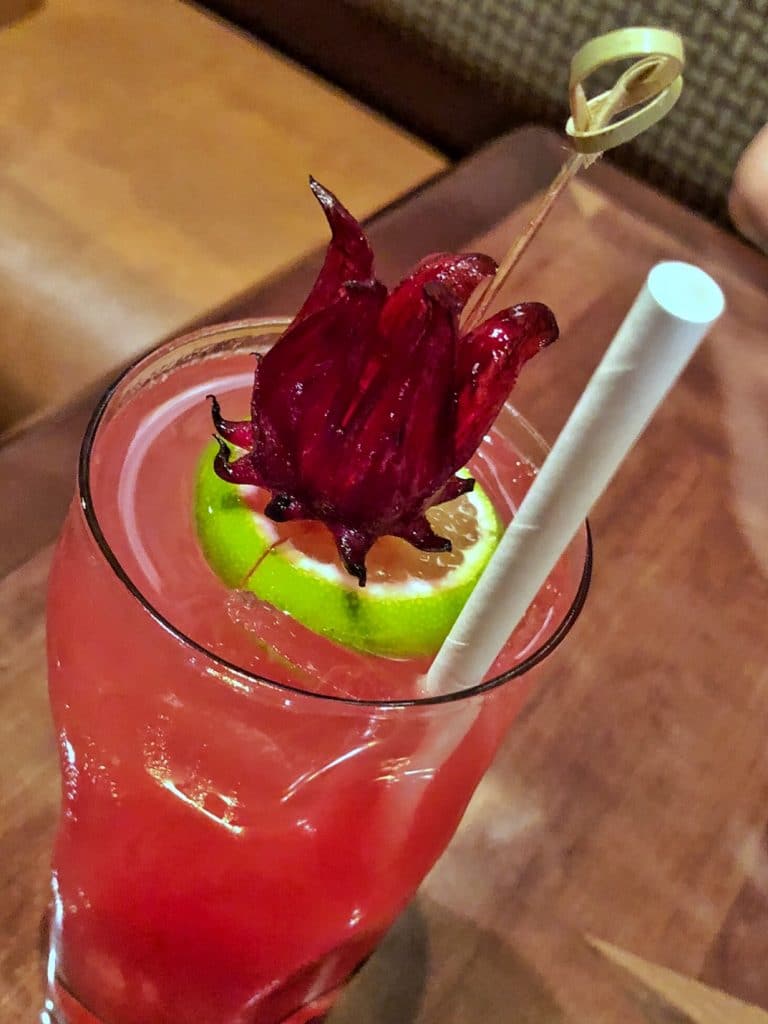 It’s a blend of Ketel One vodka, watermelon, hibiscus and lime juice.

The garnish of a lime wedge and candied hibiscus flower make it look otherworldly. 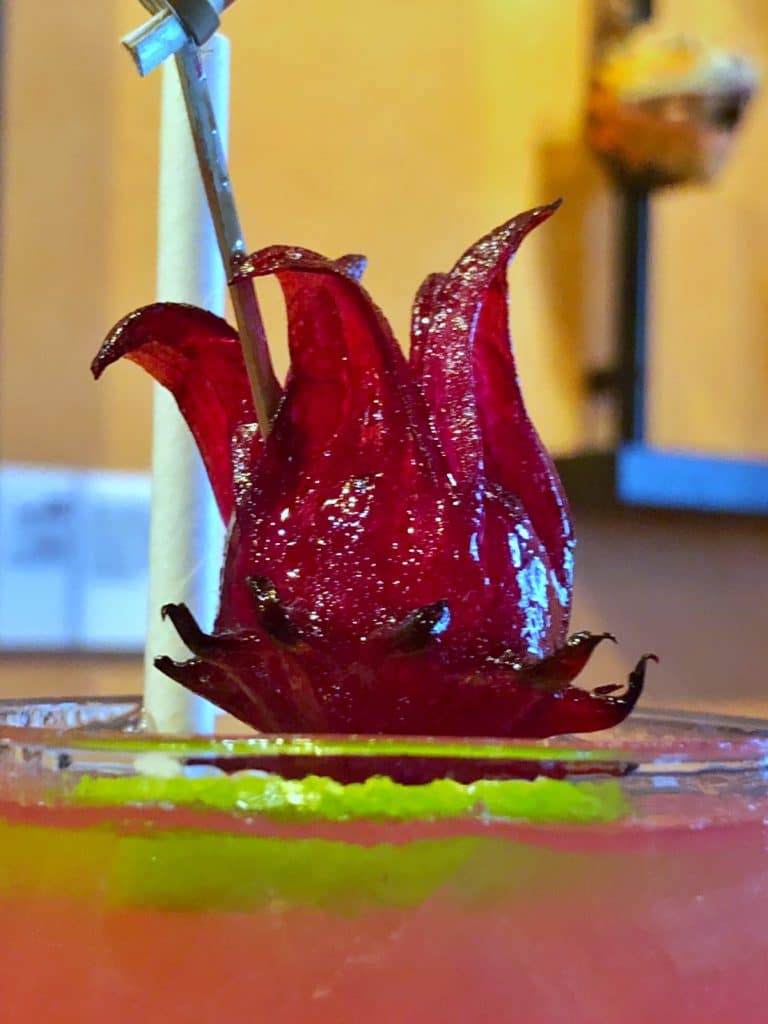 This beverage was a bit too sweet for our liking but if you prefer a sweet cocktail it may just hit the spot.

For our entree we have the vegan as-is North African-spiced Tofu ($30). 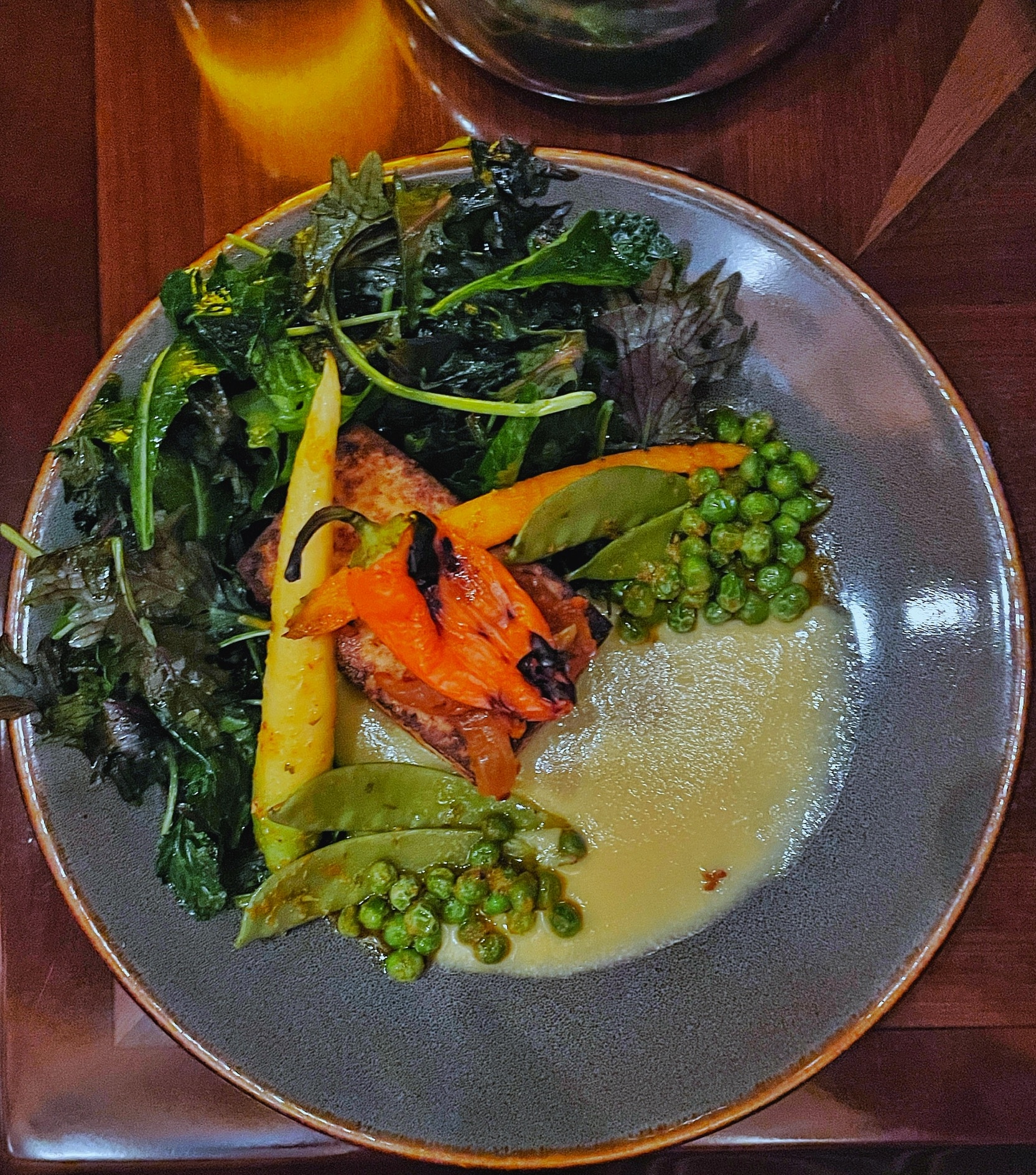 The plating of this entree is stunning and includes chermoula infused seasonal vegetables like peas, carrots and peppers served alongside greens. Seared tofu is topped with chakalaka, which is a spicy South African onion and tomato medley, and edible flowers. 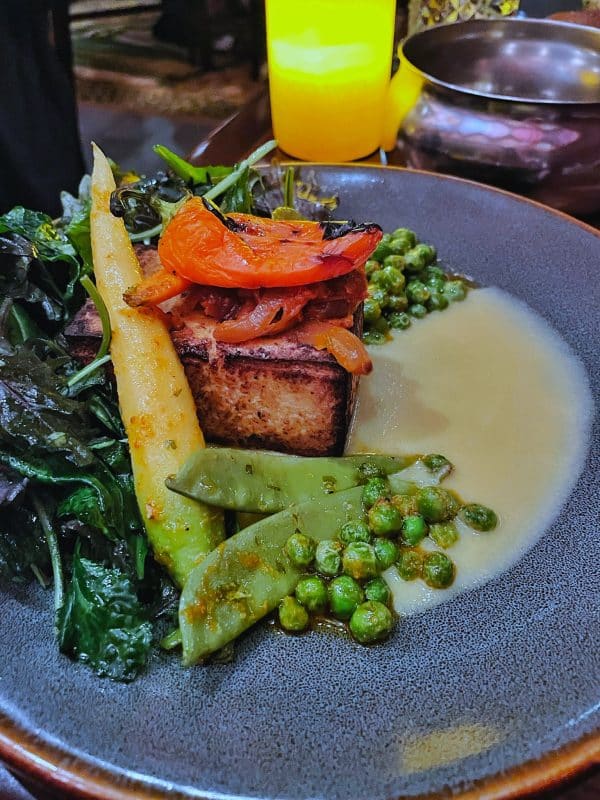 This all sits on a corn emulsion. 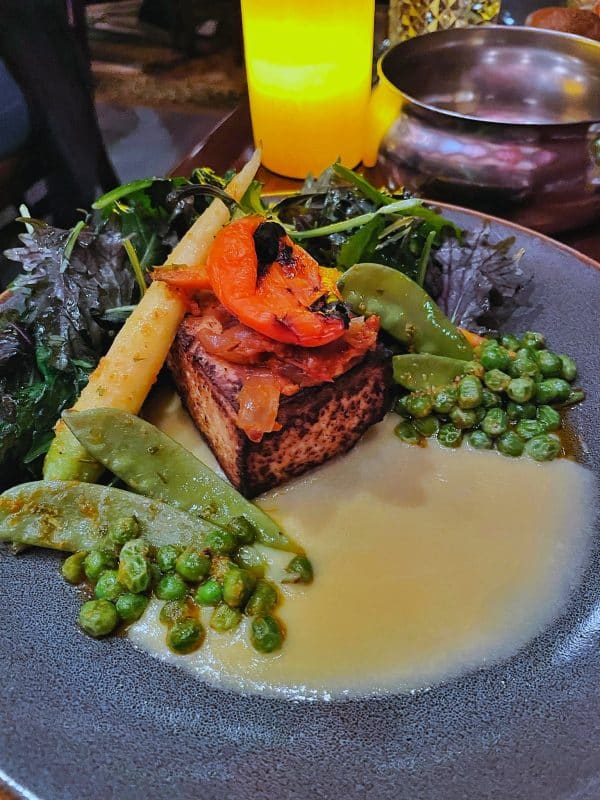 I absolutely love the flavors and textures of this dish, and it’s one of my favorites on property.

Another vegan option at Tiffins  is to order the Impossible Bunny Chow ($12) from the kids menu. 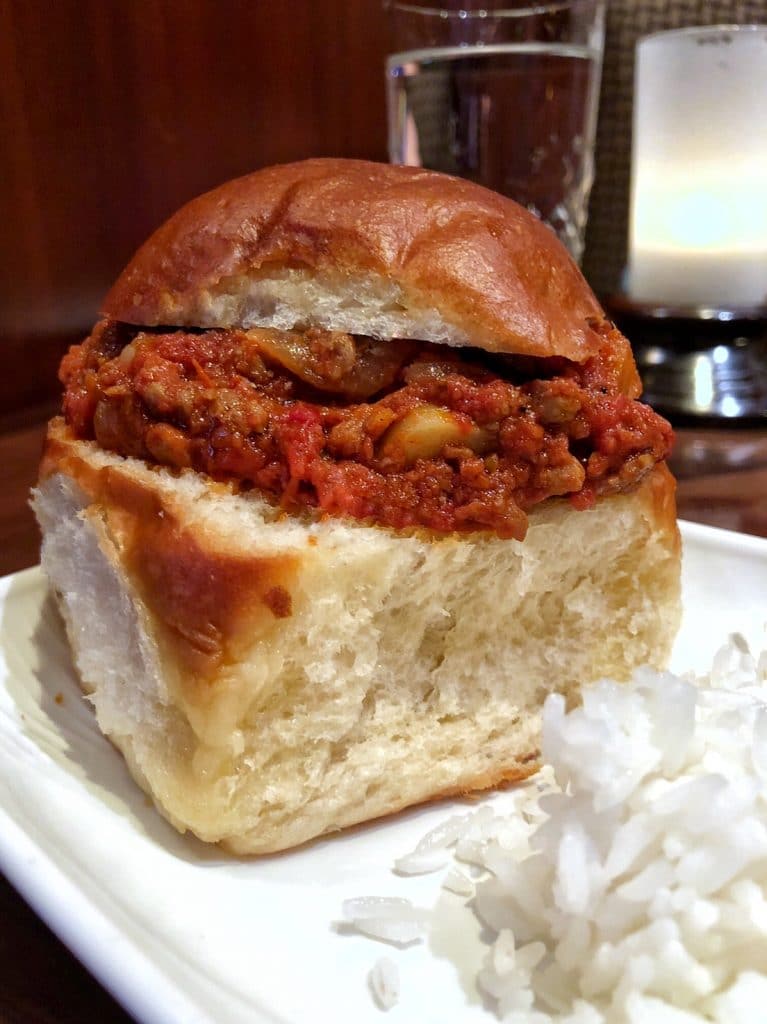 This dish is a small vegan bread bowl filled with seasoned Impossible meat, potatoes and chakalaka. The chow has fantastic flavor and the bread is pillowy soft.

You get your choice of two sides with this kids meal. Pictured is white rice and purple potato wedges. Other veggies are available. 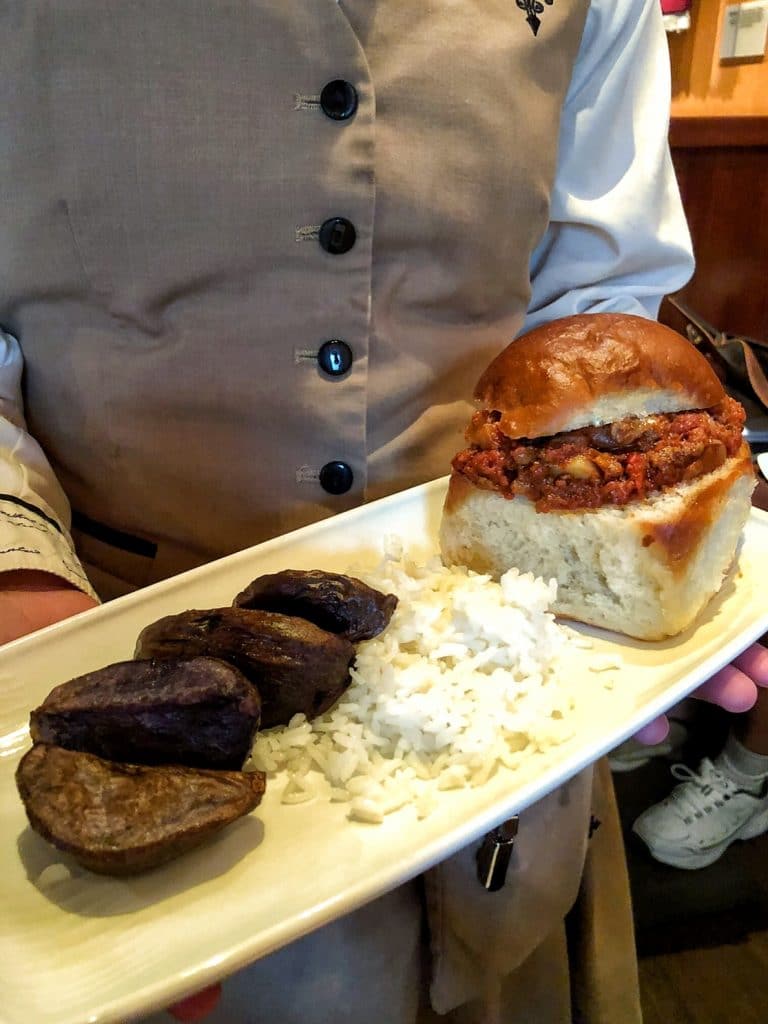 There’s one plant based vegan dessert option at Tiffins which is the Tropical Trifle($10).

This has been recently updated and slightly modified from the Passion Fruit Tapioca Creme that is shown below. It is now Coconut Panna Cotta, Passion Fruit Tapioca, Caramelized Pineapple, Coconut Crumble (previously chocolate crumble), Coconut Tuile (new addition). Guess we just have to go back! 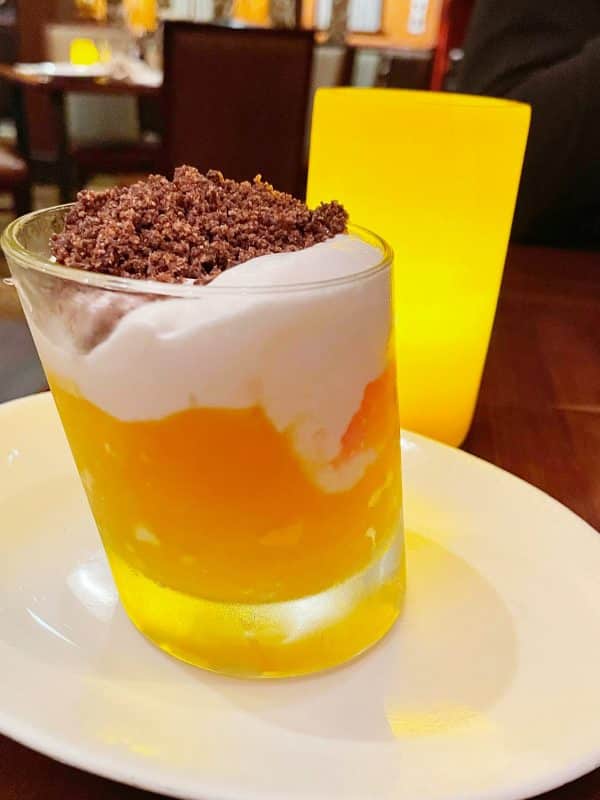 If you’re wondering where the name Tiffins came from, it’s actually an English word used to describe a light meal. Tiffin boxes are used to contain these mid day snacks and you’ll find examples of them on top of the sign outside of the restaurant. 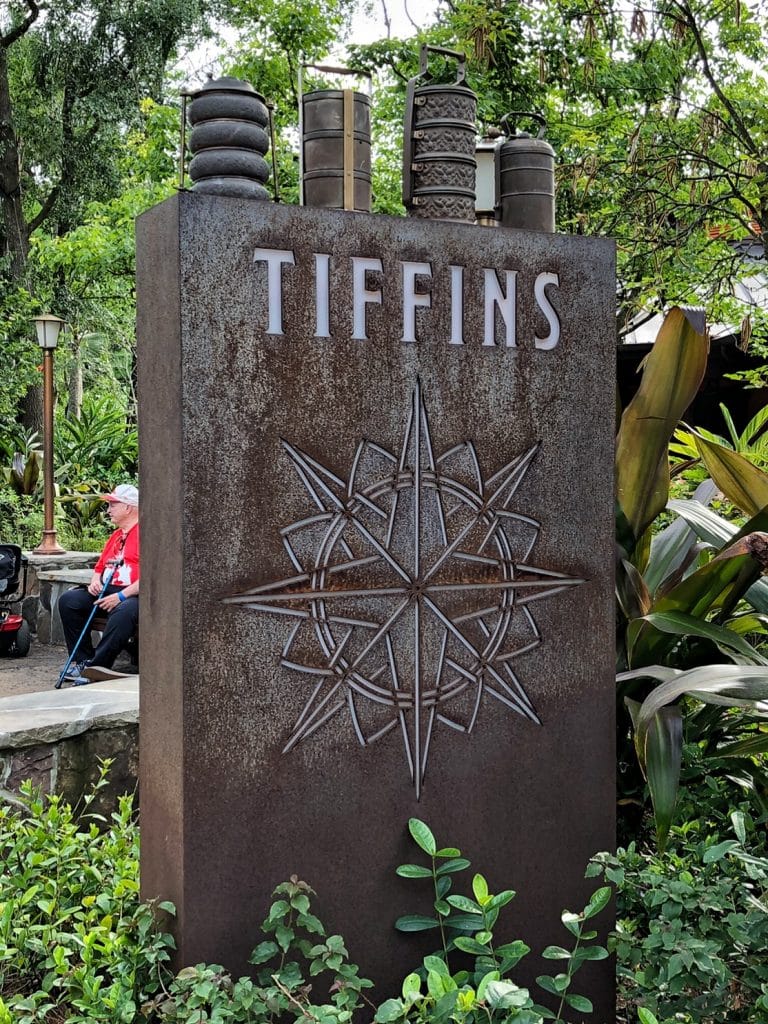 I hope you’ve found something inside this vegan review that compels you to give Tiffins a try. It really is a fantastic signature dining experience.

WANT TO REMEMBER THIS OPTION? Save the “Tiffins Vegan Review” pin to your favorite Pinterest board. 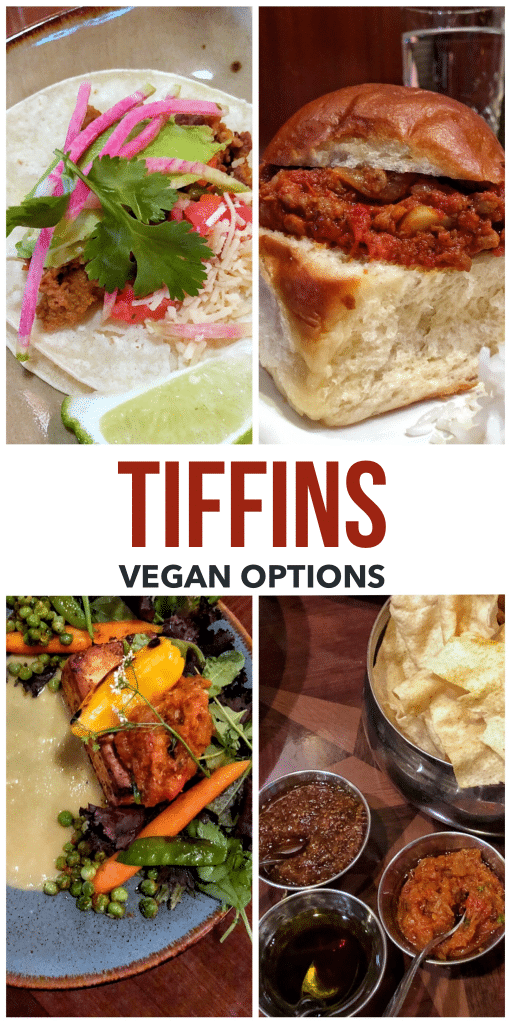