As we shared previously on our VeganDisneyFood instagram story, Tusker House reopened on June 20th for breakfast and lunch/dinner with vegan options. This is an exciting reopening because Tusker House has always had nice vegan choices, but has been closed for over a year. With the reopening, we were hoping for some new vegan breakfast items to join the Tusker House menu. We got some! If you’re looking for the Tusker House vegan lunch and dinner review, we’ve got you covered there too! 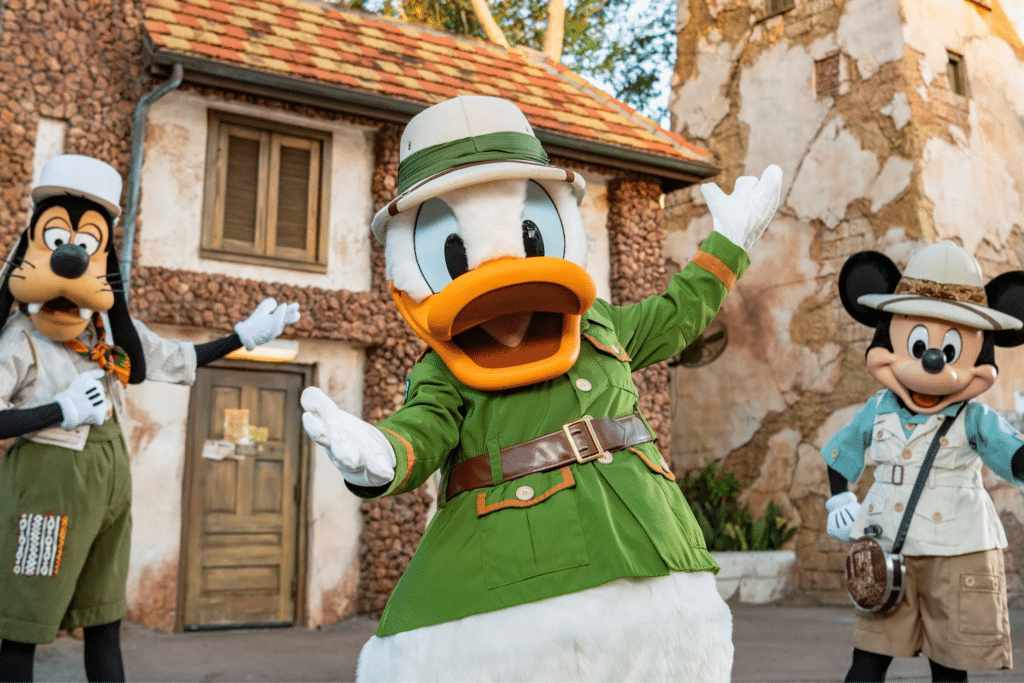 Tusker House, located in the Harambe section of Disney’s Animal Kingdom, offers character dining with Donald and friends for breakfast, lunch, and dinner – and the characters will be back! Donald and his pals appear in their safari finery, with safety protocols still in place, similar to Chef Mickey’s. Also similar to Chef Mickey’s and other former buffet locations, Tusker House offers a family style breakfast, lunch, and dinner service. We’ve got the scoop on what the plant-based vegan breakfast at Tusker House will be, which has not been officially released on Disney’s menus yet.

The vegan plant-based all-you-care-to-enjoy breakfast platter at Tusker House will include:

The platter will be $42 for adults and $27 for children. Again, Donald and friends will be there and it’s all you can eat (all-you-care-to-enjoy). 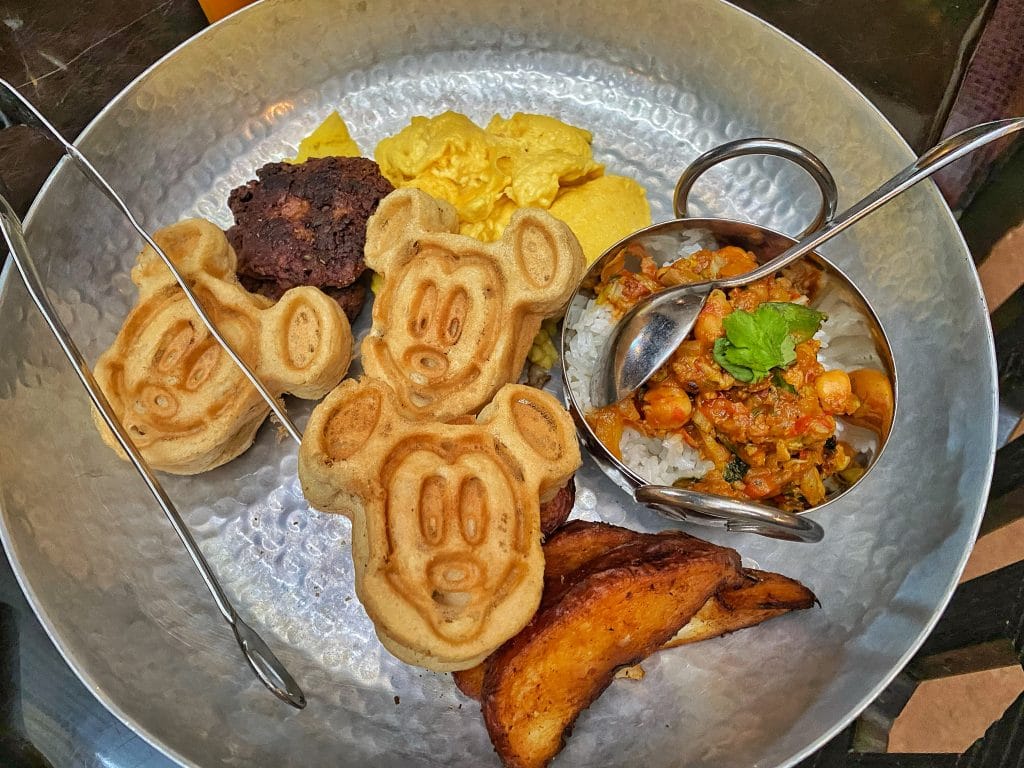 We had previously been sent a preview photo which featured vegan donuts. Sadly, they did not make the cut, apparently the donuts have egg in them, so that’s sad. Even sadder, the only vegan breakfast bread option are those same gluten-free rolls we had at Cape May Cafe. Honestly, if I return, I’ll just tell them not to bother bringing them out because they are not worth spending time eating unless you really have no choice, in my opinion. 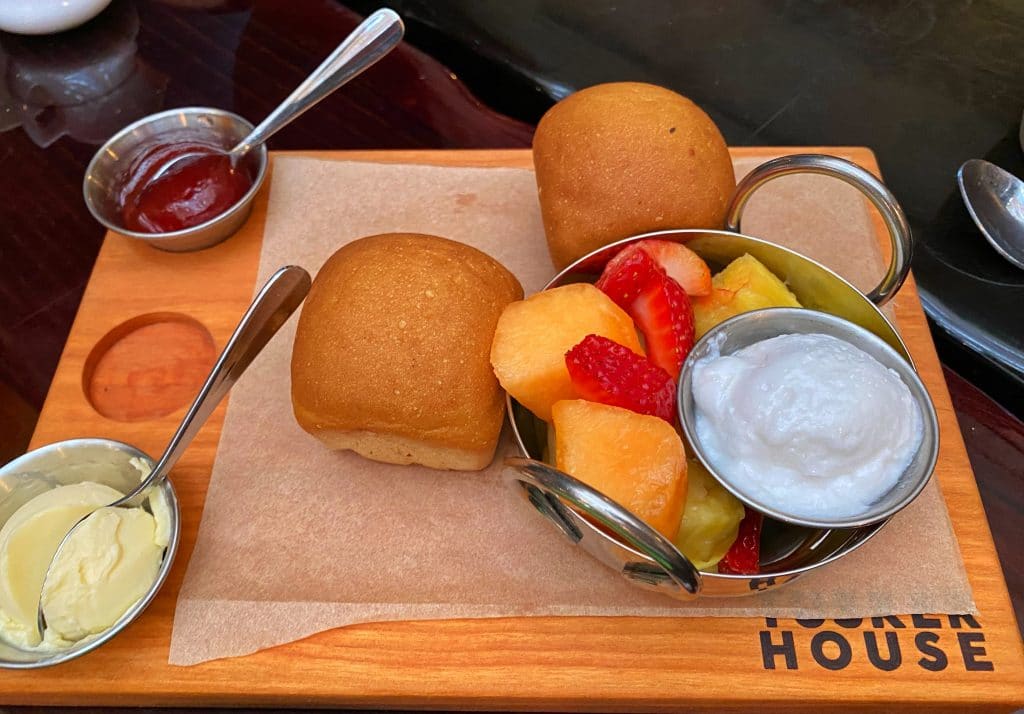 In a place where the non-vegan option includes crazy fun leopard-print bread, it would be nice to have even ONE vegan, plant-based alternative. Especially with SO many amazing vegan bakeries in the Orlando area (and even Disney Springs!), it’s really disappointing.

That said, the rest of the breakfast was delicious. We are served the same fruit as the non-vegan option, ours comes with plant-based yogurt. It’s plain, so nothing too flavorful, but a nice balance to the fruit.

As noted above, the skillet itself is full of Just Egg brand scrambled “eggs,” roasted potato wedges, Mickey Waffles, and house-made sausage with Impossible brand meat. 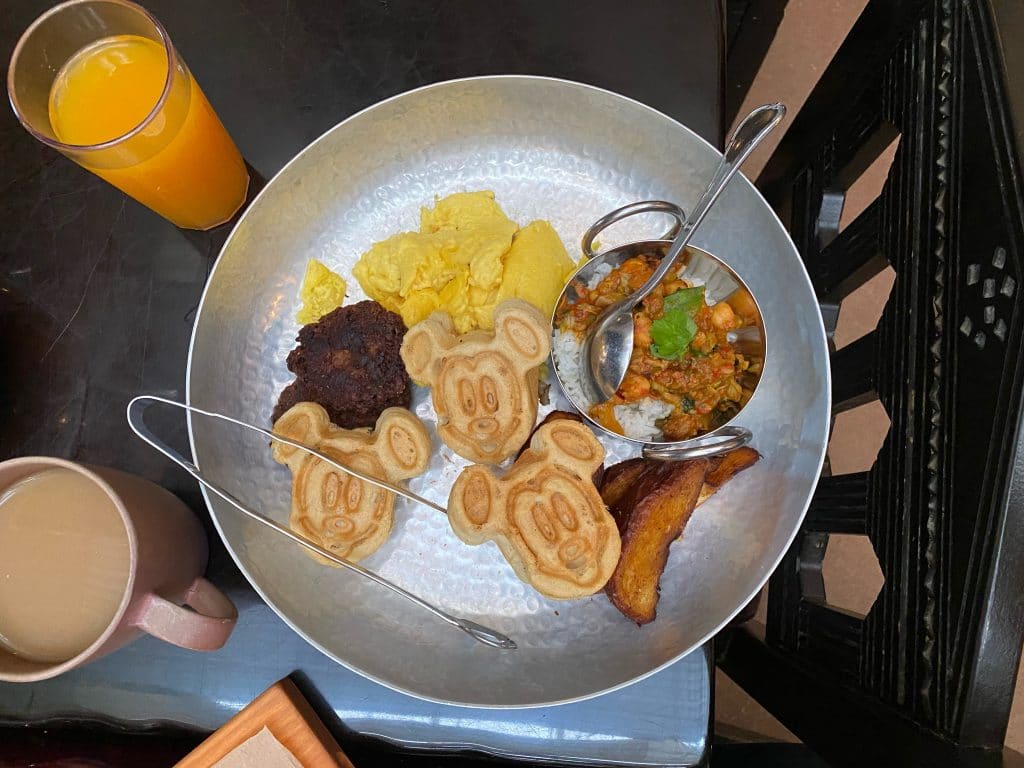 Also included is a savory breakfast side: Chickpea Curry. It was quite delicious, full of flavors and very hearty. And remember, it’s all-you-care-to-enjoy!

UPDATE: After seeing some folks on social media posting their breakfast without the Just Egg and without the Chickpea Curry, we headed back to Tusker House to speak to a chef and confirmed the following: The breakfast curry is supposed to be the same Impossible Curry served with dinner. You ARE, as we mentioned on our vegan Tusker House lunch/dinner review, that you can request it without the Impossible meat, or however you need to have it made for your needs. Additionally, we were told the Just Egg IS confirmed part of the breakfast options.

This is why we always encourage vegan guests to ask to speak to a chef. They truly are there to help and accommodate your needs. The servers, while they mean well, just may not know the ins and outs and what is and isn’t done in the kitchens. The main reason we have this site is to take the worry and stress out of ordering at Disney, so if you find a different result than what we share here, please ask to speak to a chef so you can get your money and meal’s worth. And let us know, so we can reach out and try and get an answer too. We are happy to help when we can! 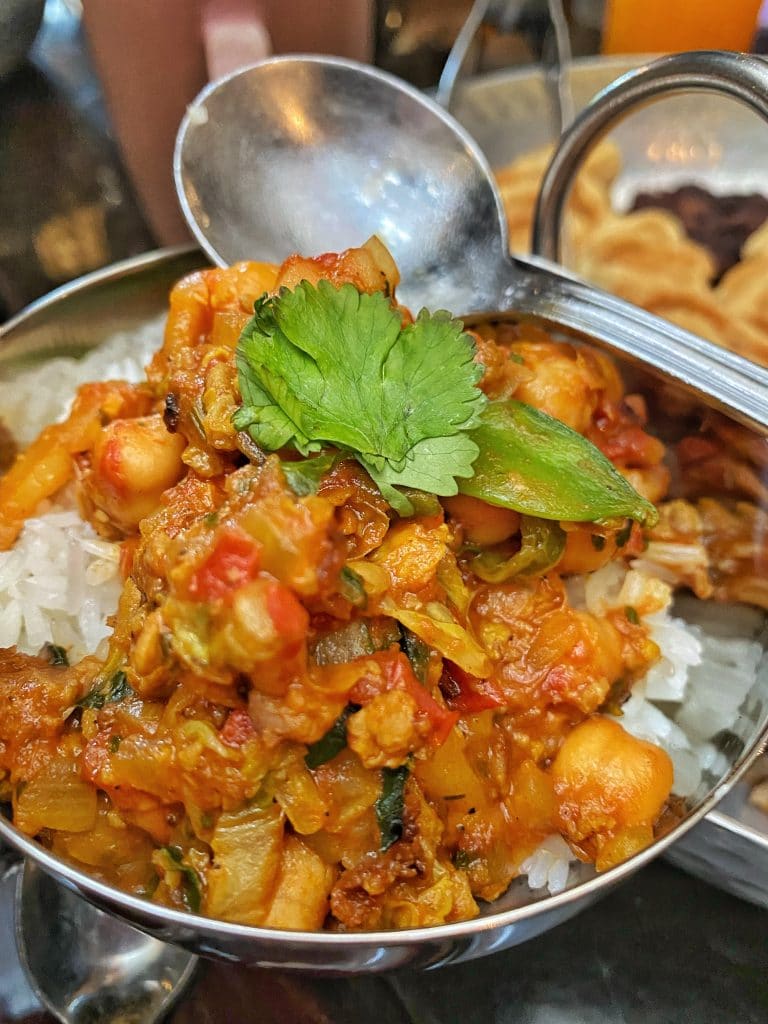 Because I asked about the donuts and learned of them not being there, our server brought out some Pappadam bread for me. This is usually served with the lunch option. She also brought out the Njoy brand gluten-free/vegan cookies. 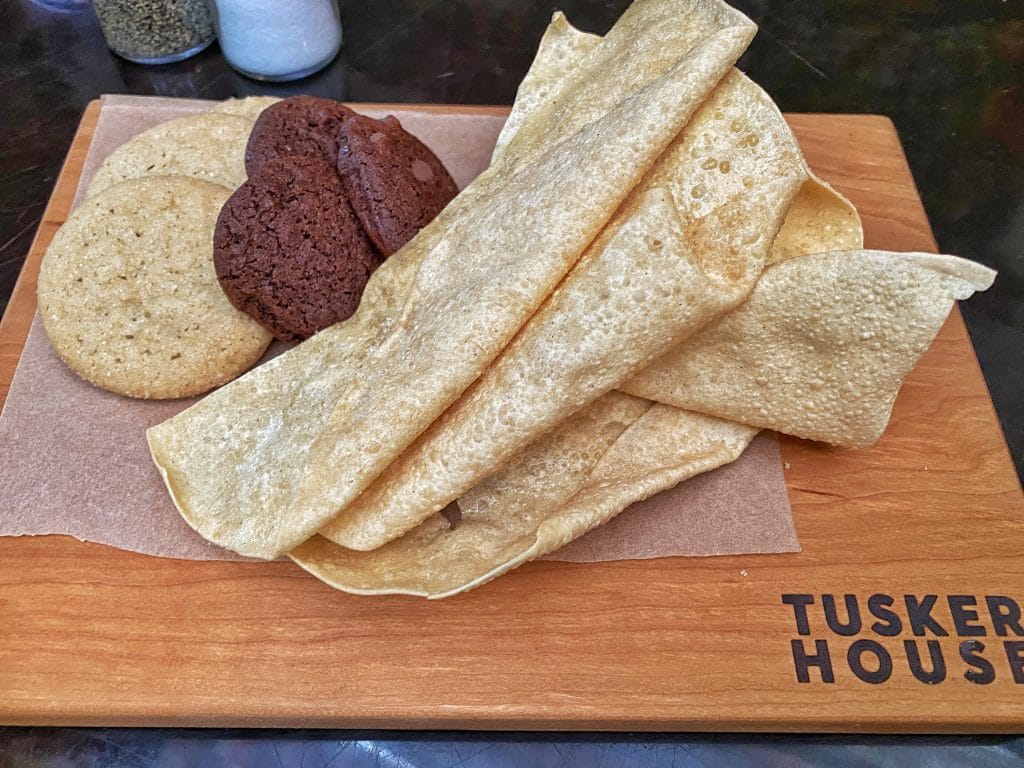 The main event here is the main skillet, and that IS worth coming back for in my opinion. I also love the atmosphere at Tusker House. The music, the character costumes, it’s just a fun time all around.

Here’s our video vegan review of breakfast and lunch/dinner at Tusker House: