The Plaza Restaurant is a charming little spot located at the end of Main Street, U.S.A. in the Magic Kingdom. I’ve always loved this spot for a quick table service bite, Cinderella Castle views, and ice cream! The Plaza recently got some new vegan menu items and we were able to snag a reservation and try out these new vegan dishes. 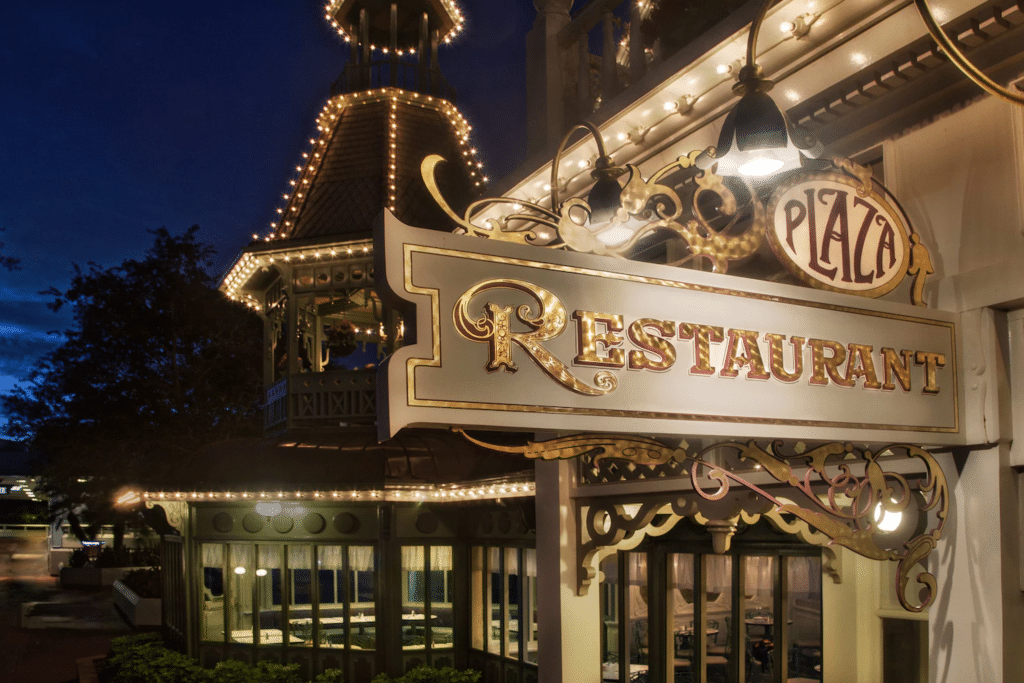 Previously, there was a vegan Bangers and Mash option here, which I never personally tried, but heard was nothing to write home about. The Plaza Restaurant’s vegan menu now features an Impossible burger, which I know is disappointing to some, with an Impossible burger also available at Cosmic Rays. However, this is a unique burger, and there is also a vegan chili appetizer and an amazing vegan banana bread pudding dessert that makes it totally worth a visit, in my opinion. The banana bread pudding is not new, but it definitely has changed from our original post when the vegan Banana Bread Pudding first appeared.

I really enjoyed the appetizer of vegan chili ($9) was quite a surprise. I had assumed, based on other plant-based chili options around the parks and resorts, that it would have Impossible meat in it. Turns out it is completely vegetable-based. This chili is chock-full of kidney beans, carrots, onions and a little kick of spice. Sprinkled with vegan cheese, it’s also served with a lime wedge and what was listed on the menu as cashew cream, but was served to me as cashew butter. The cashew butter was delicious, and a fun texture and flavor to add to the chili. Truthfully, the chili stands on its own as a wonderfully hearty stew-like dish.

Honestly, I was a little worried about trying yet another Impossible burger. My worries were soon gone when the burger arrived. Topped with more of the vegan chili, but mixed with sautéed mushrooms, and poured over more of the shredded cheese we got with the chili, it was a wonderful mix of flavors. It didn’t taste at all like just more chili, it had its own unique set of textures and flavors. As I note in the video, however, it IS messy. Definitely a knife and fork burger. The fries were regular ol’ Disney fries, nothing to write home about.

We also shared a vegan milkshake ($7) because, you know, research! This is one of the spots in the parks that you can enjoy a plant-based milkshake, so you have to take advantage of that. You can get vanilla or chocolate, made with soy based ice cream, usually Tofutti brand. We asked if we could get both flavors together, and they said yes. It was delicious. The chocolate took over, but you could taste that sweet, almost butter-pecan flavor of the vanilla in there too. Such a good milkshake! 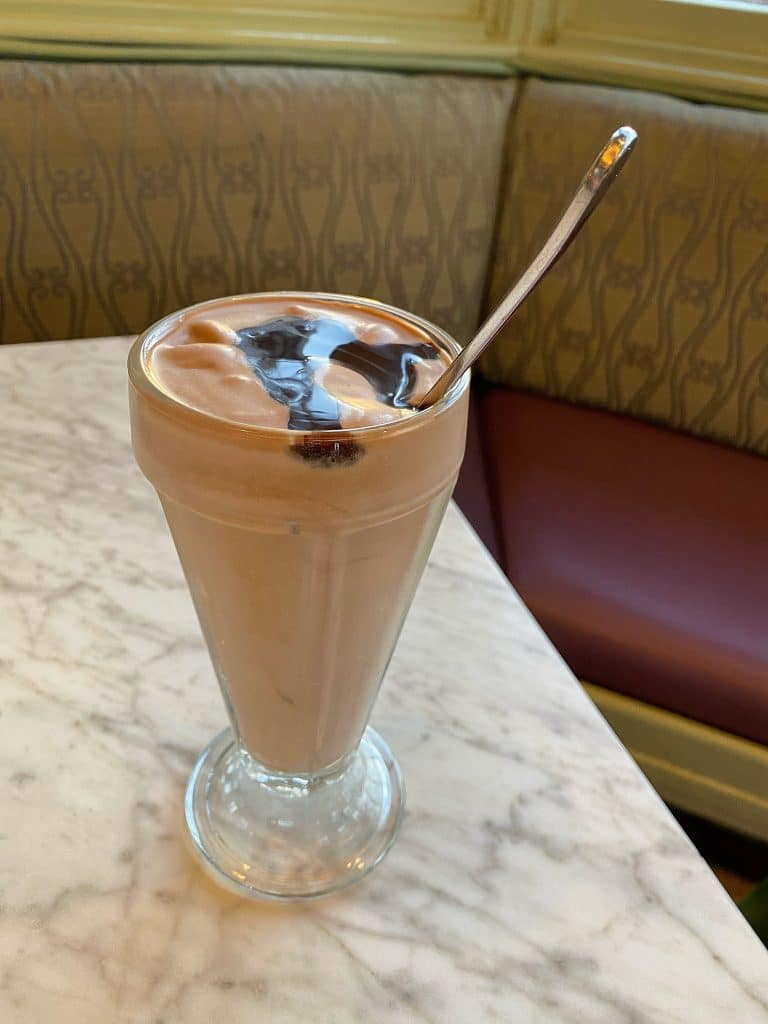 Lastly, the entire reason to try and visit the Plaza Restaurant in my opinion, the vegan Banana Bread Pudding ($9). This maaay be my new favorite dessert on property. New to me anyway. I hadn’t had it until this visit and it was life-changing. Super fluffy, dark chocolate, fresh sliced bananas, and a touch of nutmeg that really makes it stand out. Topped with the vanilla Tofutti and chocolate drizzle. 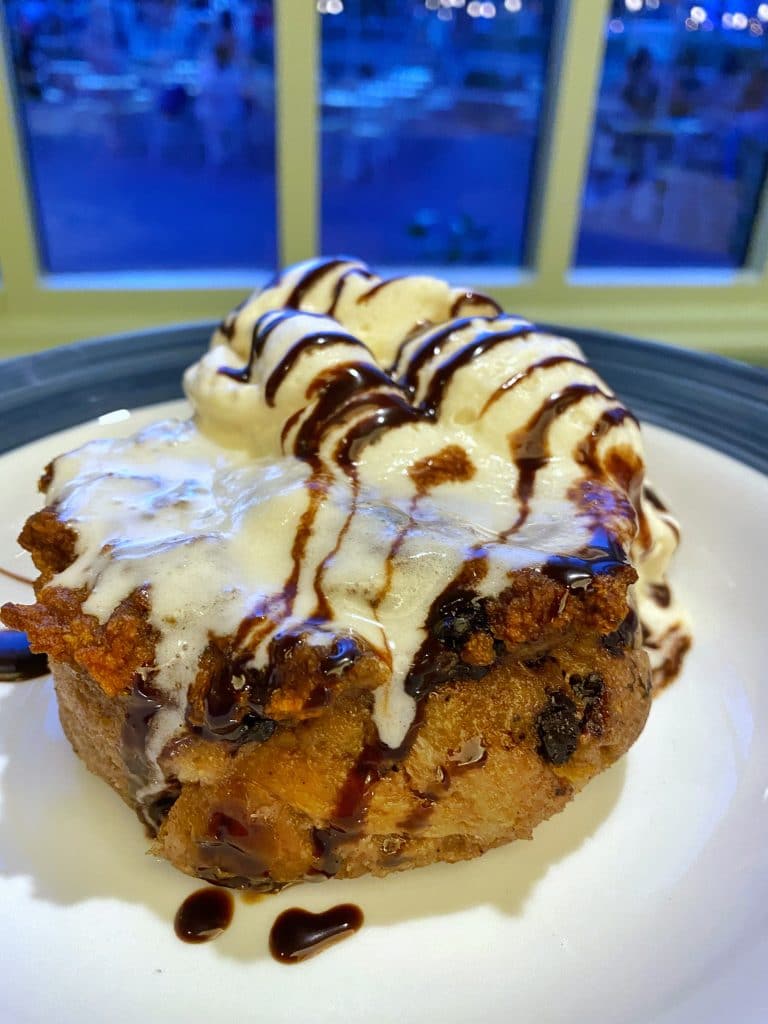 Amazing. I would come back here again and get the chili and this dessert and be perfectly content. Ok, maybe a milkshake too.

Click to watch video review so you can see more of the food and my thoughts on everything:

Have you been to the Plaza Restaurant to try this new vegan burger? Or have you tried the banana bread pudding? Let us know if you do!