The Epcot International Flower & Garden Festival is so close we can almost taste the vegan food. And we did taste it today at a special media sneak peek.

We were dying to find out if the brand new “Trowel & Trellis” Outdoor Kitchen sponsored by Impossible Foods would be entirely vegan! Read on to find out what the festival chefs told me…

This year the Epcot International Flower and Garden Festival runs for approximately thirteen weeks, from March 6th through June 3rd, which gives you plenty of time to plan a visit over spring break or the beginning of Summer.

There are a total of eighteen Outdoor Kitchens listed within the festival passport. Here’s a look at what we already know to be vegan and what was vegan at last year’s festival. 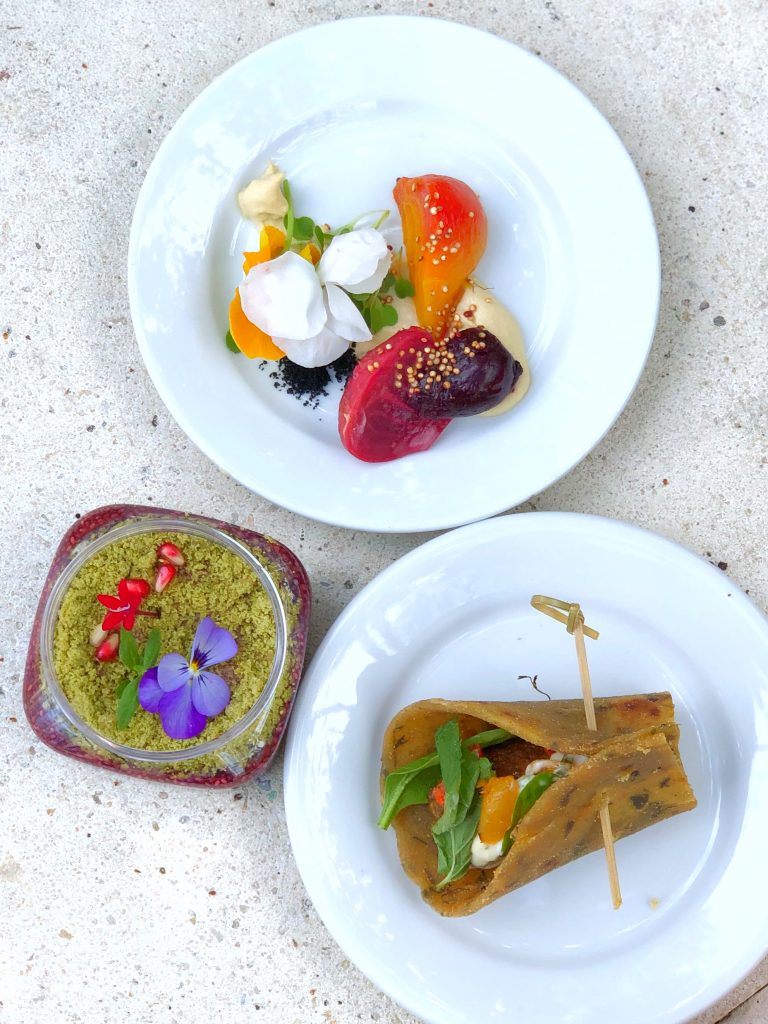 I am happy to report that every single thing at the Trowel & Trellis Outdoor Kitchen is 100% vegan as-is straight off the menu board with no modifications needed. 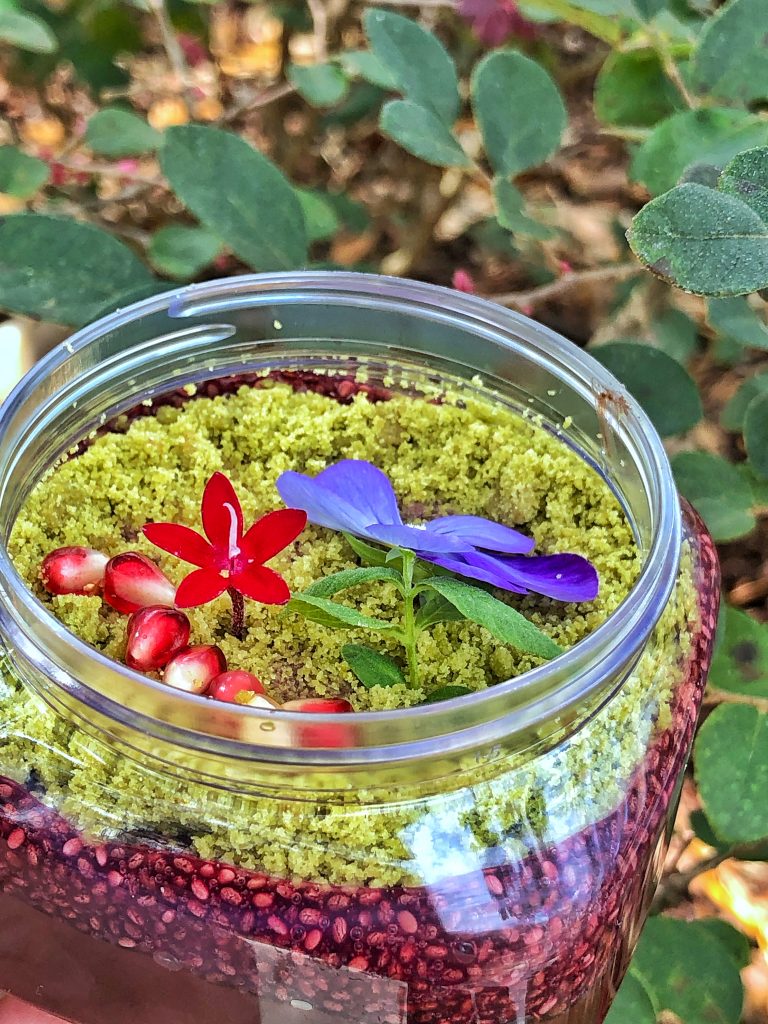 I found the texture of this dessert to be extremely interesting. I was happy that it wasn’t just one note of pudding. The seeds and fruit gave it a wonderful texture. Plus it’s really pretty to look at. The pudding is both vegan and gluten friendly.

Next up is the Farmhouse Meatball with lentil bread, spinach, marinated vegetables (onions and peppers), mint and a creamy herb dressing. 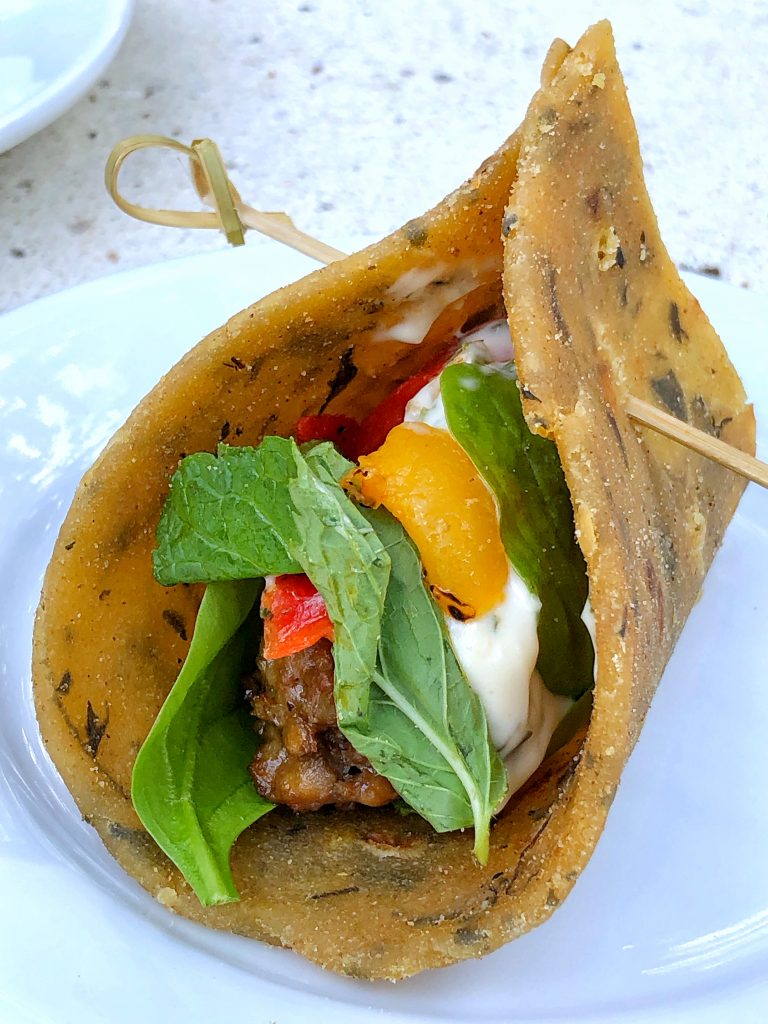 This offering was phenomenal! The meatball is made with Impossible burger “meat” and has a smidge of red chili paste to give it the slightest kick.

The vegan creamy herb dressing is a nice balance to the slightly spicy meatball and is made from a base of vegan mayo similar to the sauce on the vegan Greek Nachos available at the Epcot International Food and Wine Festival.

The lentil bread was more of a pita/flatbread texture and was strong enough to hold everything together while eating it.

Honorable beverage mention goes out to the Bloomin’ Blueberry Lemon and Ginger Tea featuring Twinings of London with Tito’s Handmade vodka and fresh blueberries served in a souvenir mason jar. 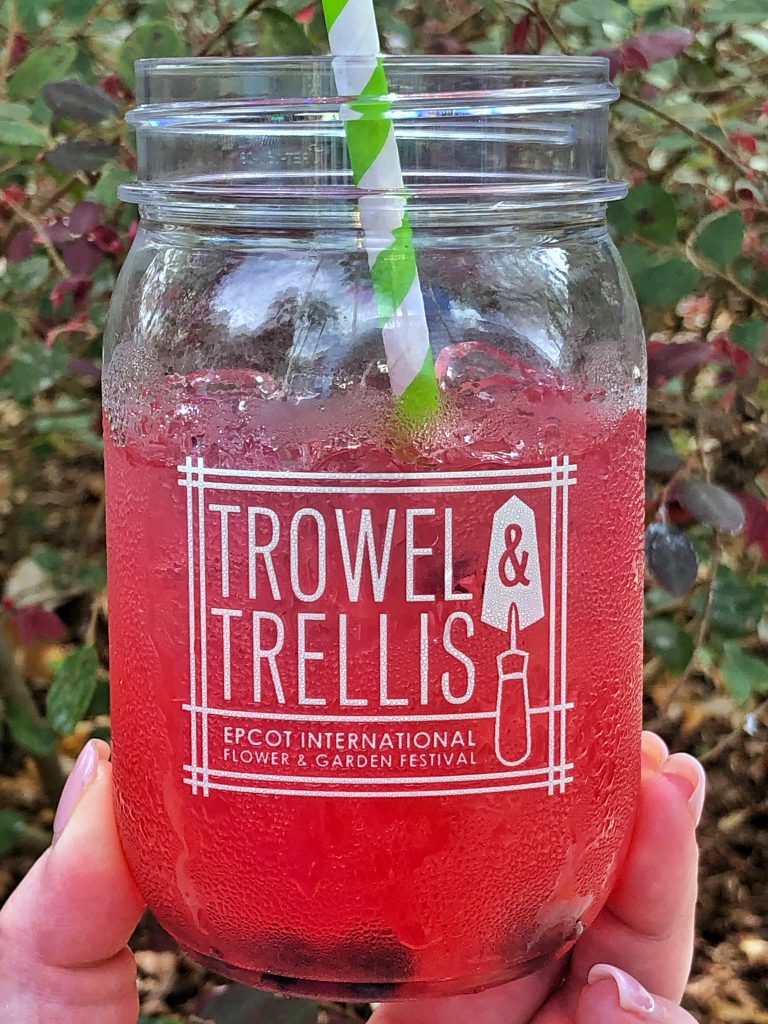 The third dish offered at this booth is both vegan and gluten-free. The Grilled Street Corn on the Cob has a savory garlic spread made from Earth Balance butter and is topped with a house-made vegan tofu cheese which resembles crumbled cotija cheese, the traditional topping for street corn. 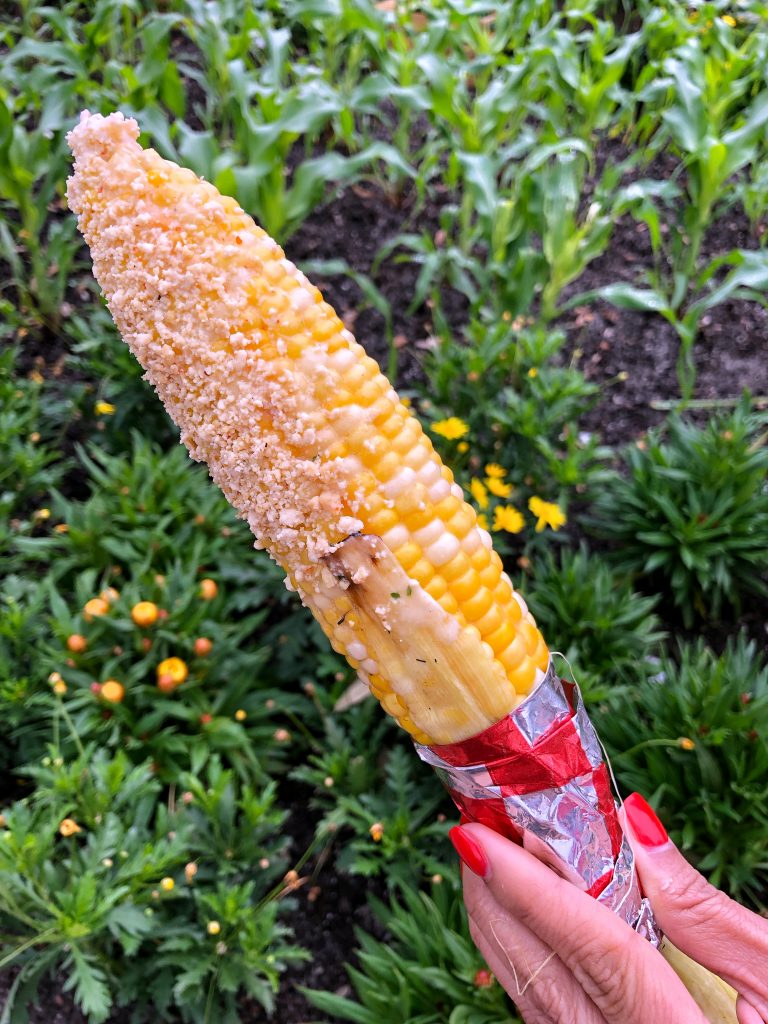 I spoke to a chef who said that they will have three grills going with this unctuous garlic buttered corn. The Trowel & Trellis booth will be in Showcase Plaza near Disney Traders where the smell of butter and garlic roasting will draw guests in to the only all vegan booth.

Another brand new kitchen at the 2019 Epcot International Flower and Garden Festival is the Flavor Full Outdoor Kitchen hosted by AdventHealth. This location which can be found in Future World West between Refreshment Port and Imagination has one vegan as-is option on the menu which also happens to be gluten-free.

This offering is called From the Garden and it starts with a base of cashew cheese blended with a little bit of nutritional yeast. That is topped with roasted red and golden beets and is garnished with onion ash, micro herbs and a lemon-oil dressing. 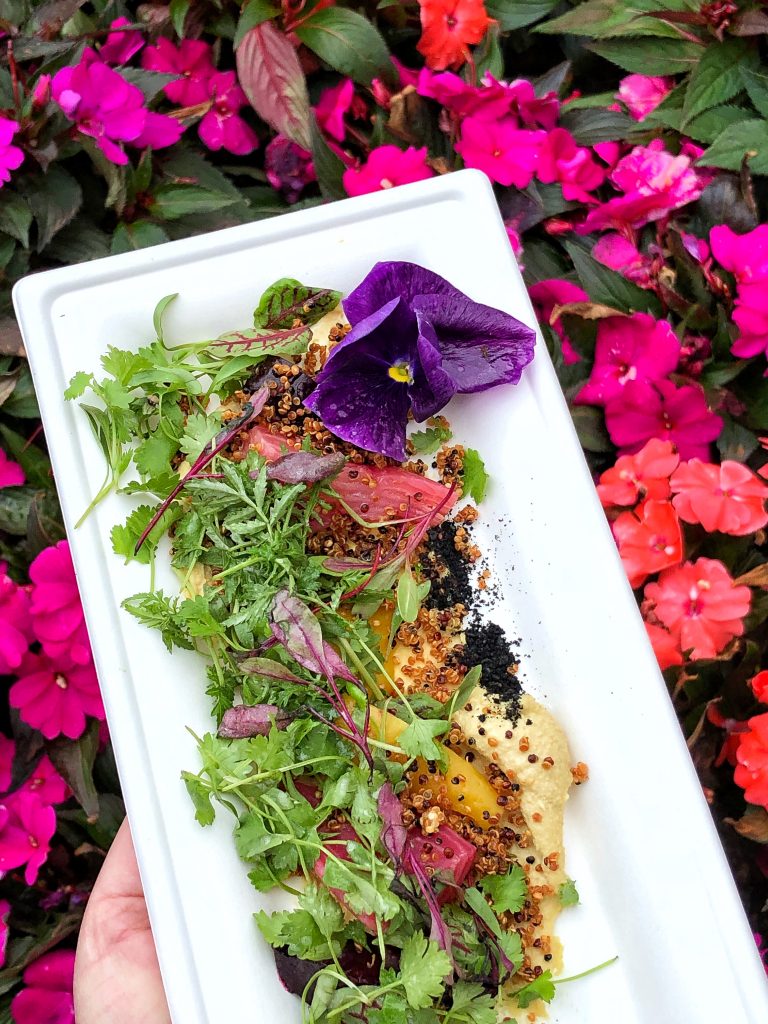 Simply ask to omit the fish and everything else is vegan. What you’ll be presented with is a lightly dressed ancient grain salad with roasted vegetables. My veggies consisted of grape tomatoes and patty pan squash. Chef confirmed that the rice and grain mixture wasn’t cooked in chicken stock. 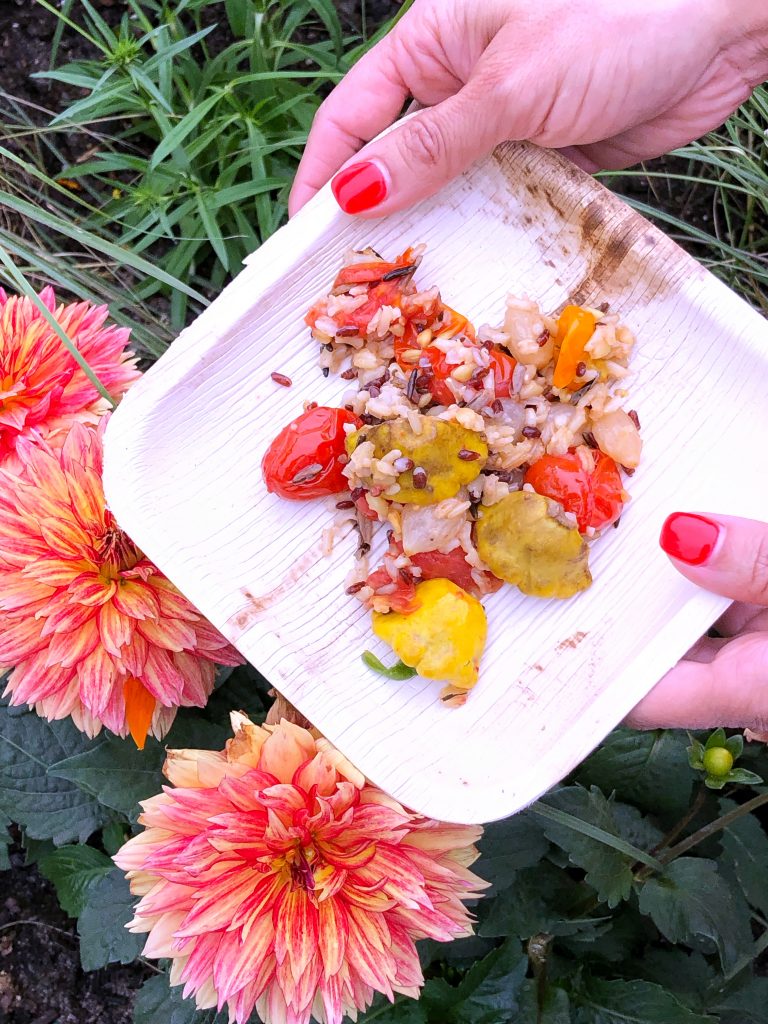 I was also able to modify one more dish to be vegan at the festival media preview.

This is the Tuna Tataki offering modified vegan by omitting the fish. 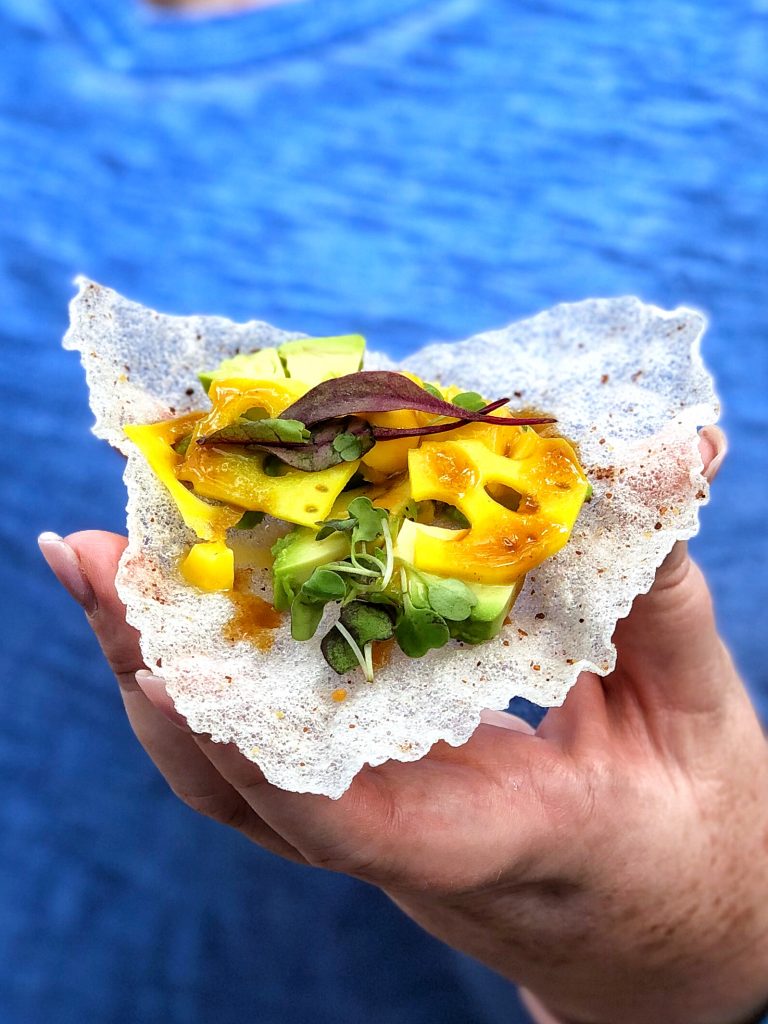 A seasoned pappadam crisp is topped with mango, avocado, pickled lotus root and micro greens and is dressed in a yuzu glaze. Skip the tuna and tobikko (fish eggs).

It’s listed on the menu as Pineapple Soft-serve Ice Cream but is actually Dole Whip. They don’t call it Dole Whip because DOLE isn’t sponsoring the booth. You can get your pineapple Dole Whip plain, in a Fanta soda float or with Parrot Bay Coconut Rum. 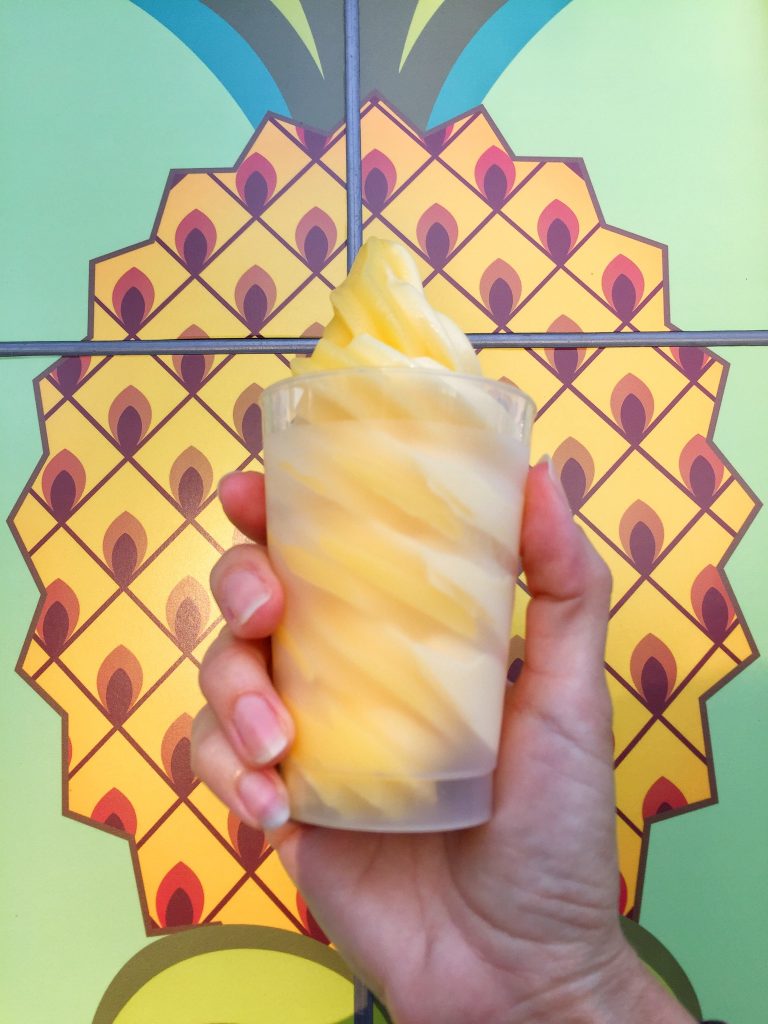 This outdoor kitchen is also where you’ll find the iconic Frozen Desert Violet Lemonade garnished with an edible flower. 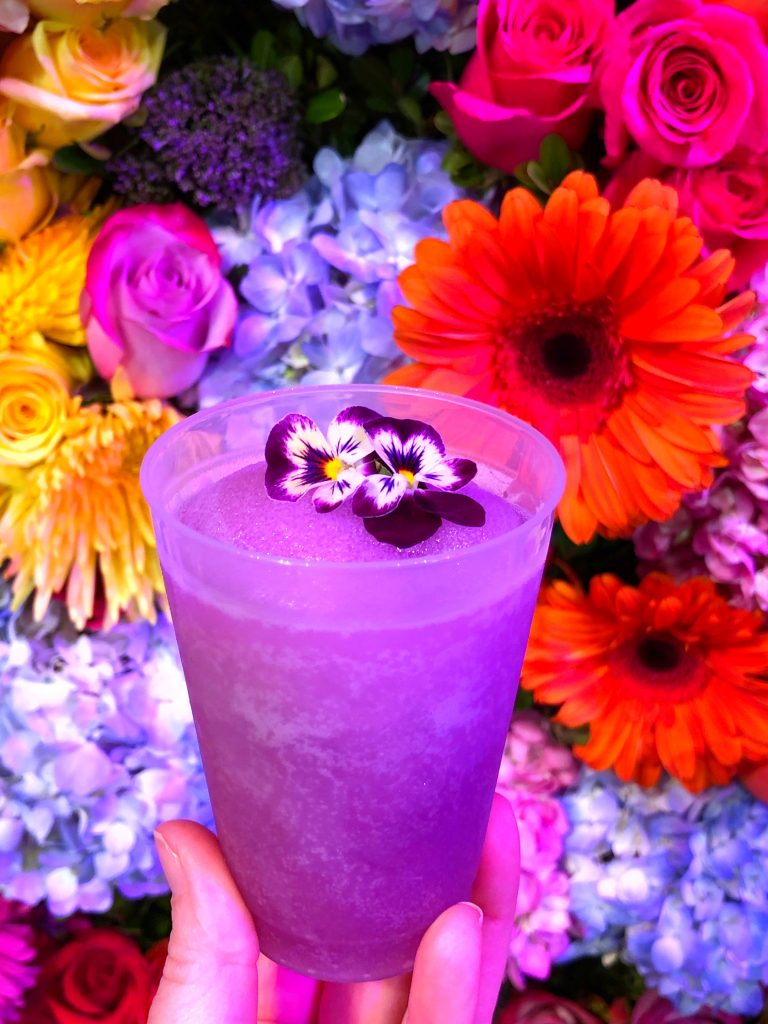 And then of course there are some returning favorites…

Here you can order the Vegetable Spring Rolls. 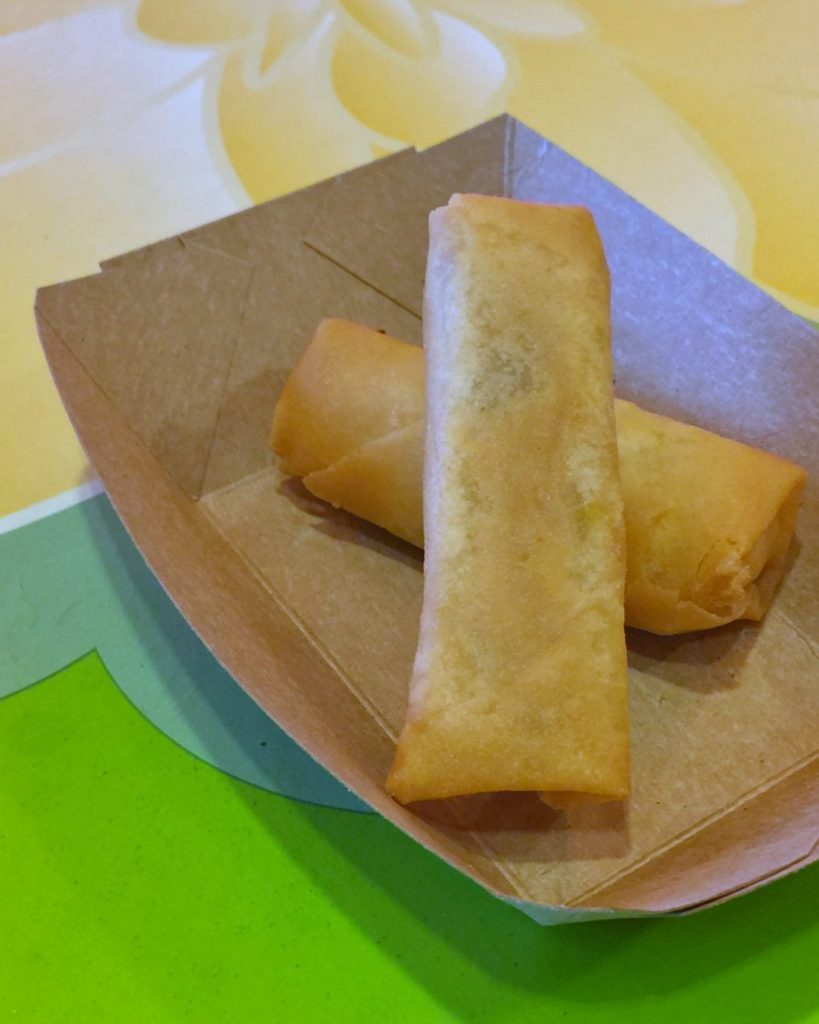 Ask to omit the spicy mayonnaise sauce that comes with them. The rolls are perfectly crisp and filled with assorted vegetables. Head over to the nearby Lotus Blossom Cafe quick service restaurant in China and pick up a few packets of soy sauce if you’d like to dip your spring rolls in a little something extra.

Last year I was able to modify the Roasted Cauliflower. 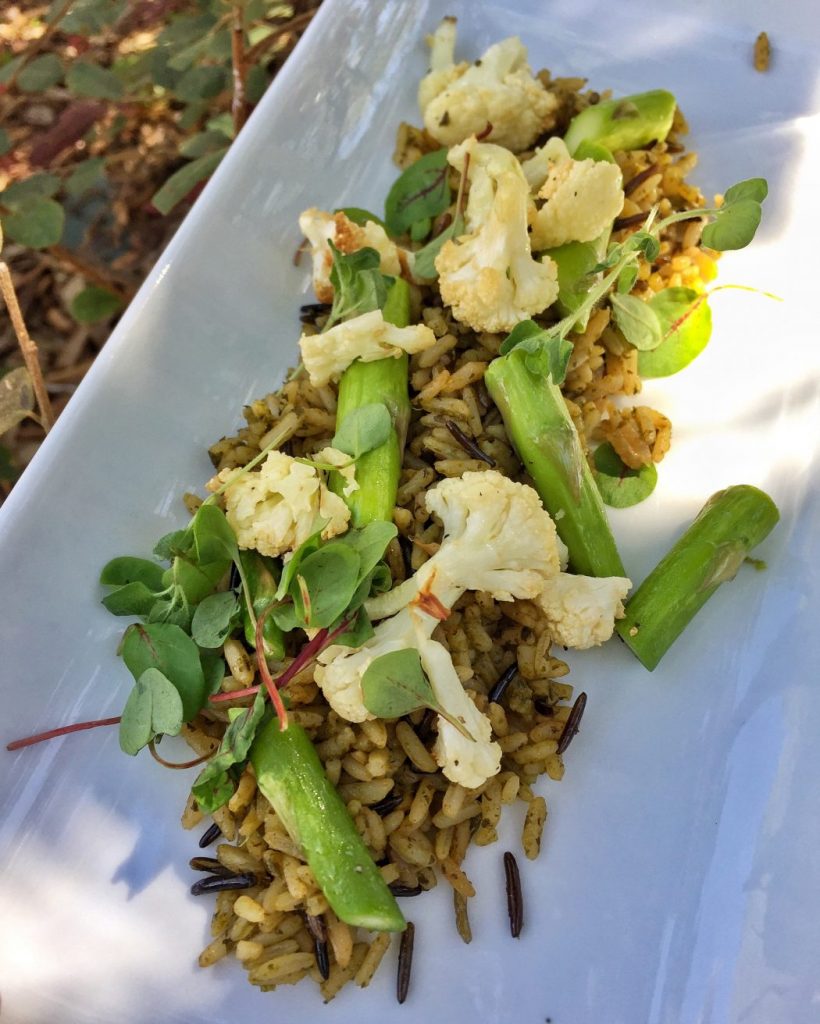 Order this dish without the buckwheat honey carrot purée, honey blistered grapes and sunflower brittle. Everything else is vegan. What you’re left with is roasted cauliflower and asparagus which sit on a bed of wild rice pilaf which will be garnished with coriander flowers. The rice is cooked in water, not stock, and then mixed with chimichurri.

In 2018 I was able to modify the Carne Guisada. 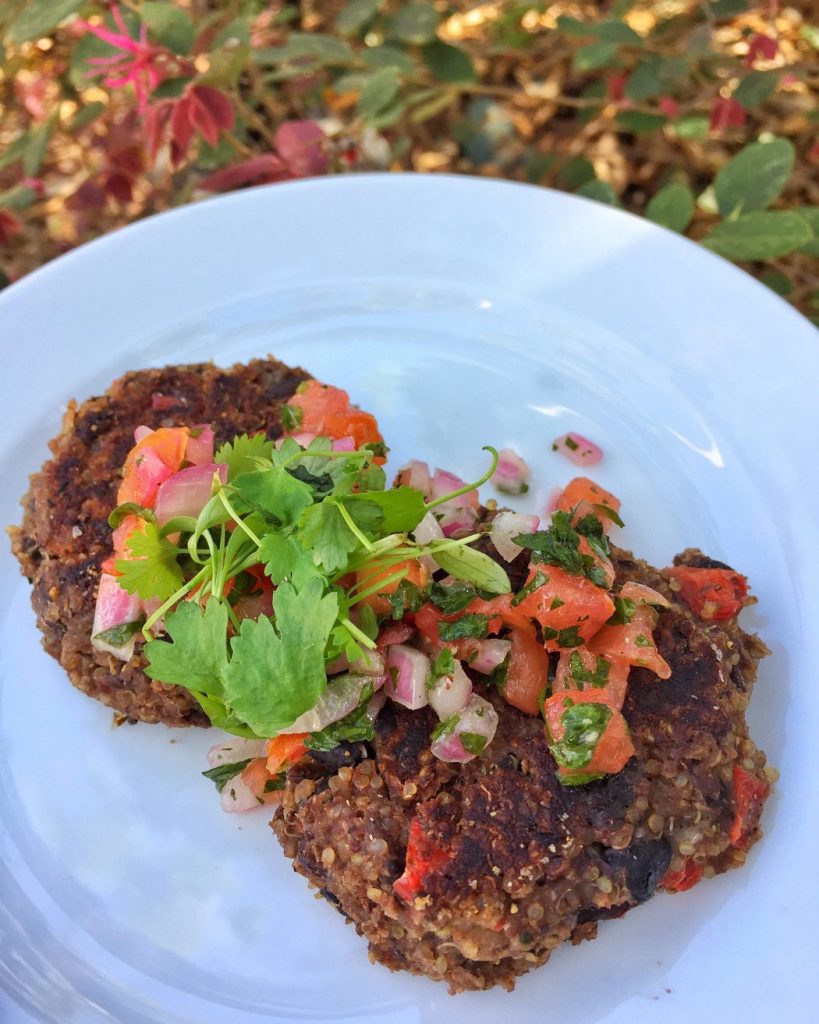 When picking up your food, tell the chef preparing it that you’re vegan and ask if you can swap the carne (meat) for a second black bean cake. They’re delicious and made with black beans, tomato and quinoa. Top them with pico de gallo and fresh cilantro and omit the cilantro-lime sour cream.

So that’s it for the vegan food Options at the Epcot International Flower & Garden Festival. Again, the festival runs from March 6th until June 3rd, 2019. For more information on the festival visit DisneyWorld.com

Special thanks to Walt Disney World for having me out to the media preview of the 2019 Epcot International Flower and Garden Festival. I was not required to write this post and opinions are my own.

For our guide to ALL the vegan options in Epcot check out this page: What’s Vegan in Epcot?

WANT TO REMEMBER THIS OPTION? Save the “The Complete Epcot International Flower and Garden Festival Vegan Disney Food Guide” 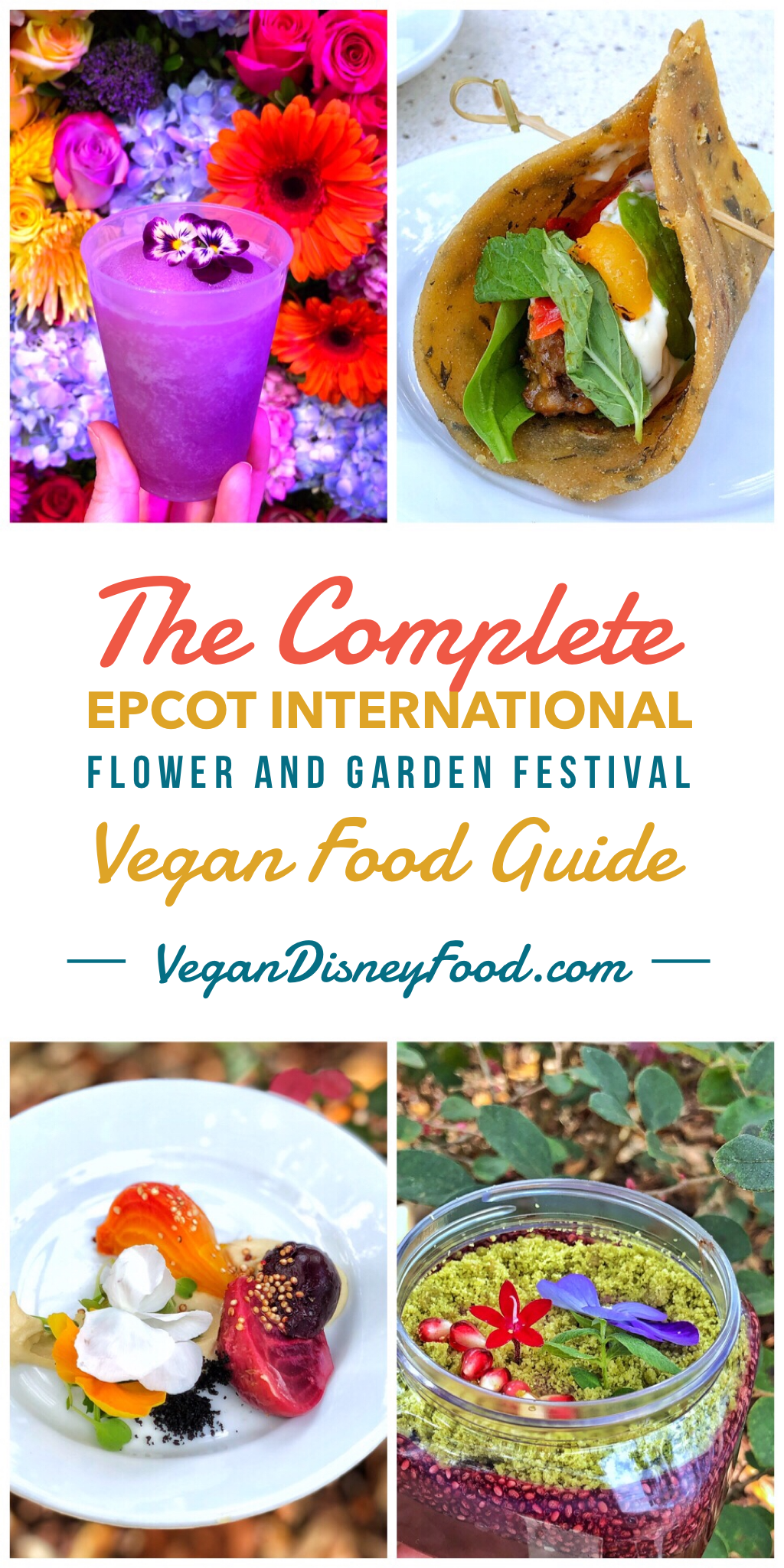