Earlier this month, Atlanta favorite Local Green Atlanta announced they were coming to Orlando with a permanent food truck location at Disney Springs – we’re sharing what vegan options you can enjoy at this new (to us) black-owned health-focused food truck. 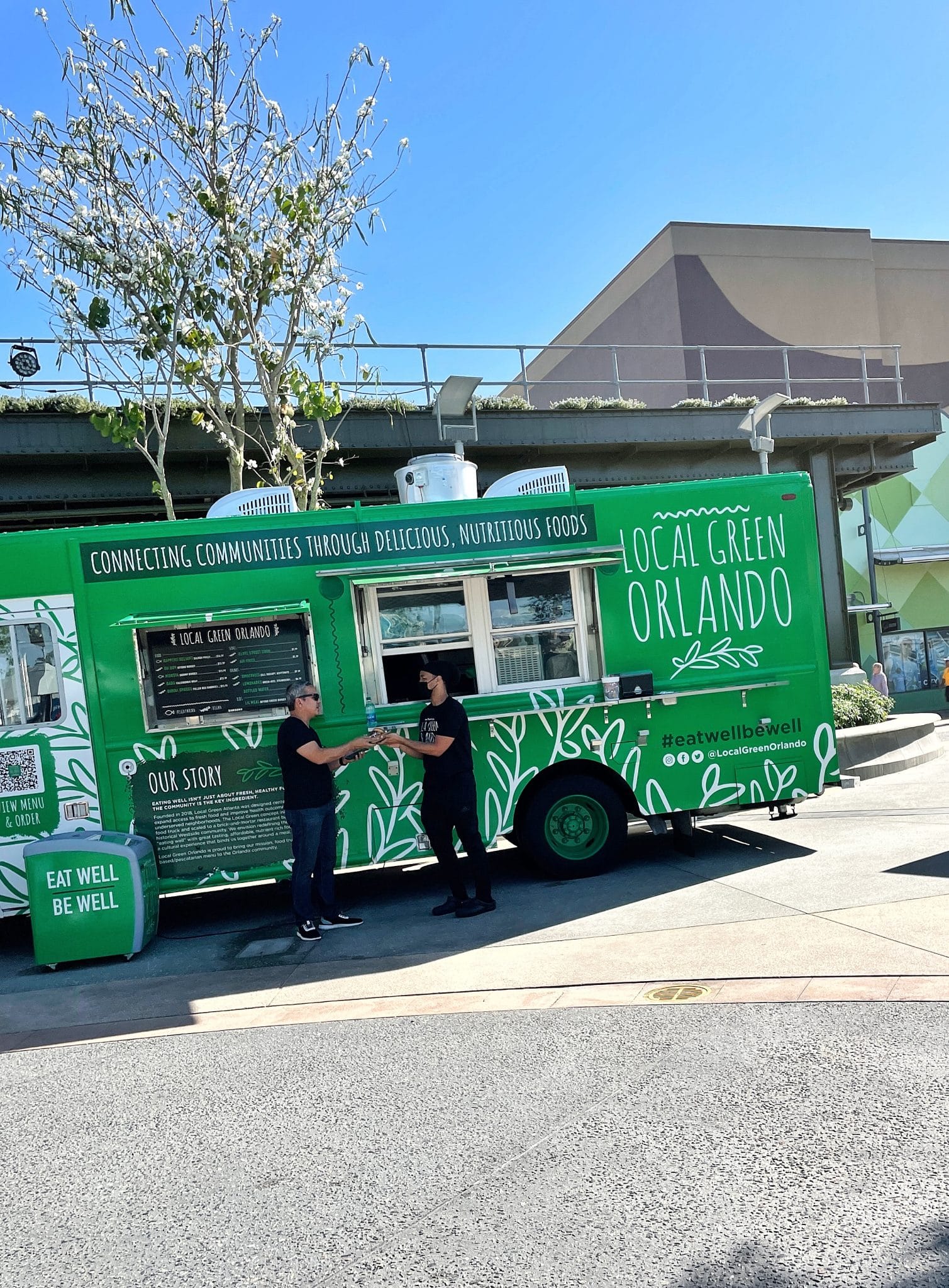 Local Green Atlanta features an all vegetarian, vegan, and pescatarian menu and they have brought some of those menu items here to the Orlando location at Disney Springs. We’ll be sharing all of the vegan options below, but you can find the full menu for Local Green Orlando here. During our visit, they were out of a few items, so we’ll definitely be back for the rest soon.

Also all of their drinks are vegan:

NOTE: Vegetarian items include the Elote Street Corn, however it can be made vegan by asking for no Parmesan cheese. Now unfortunately this is listed on the menu board on the truck as being vegan. It is not in the paper menu they hand out, or online at the link above. I also looked up the menu for the Atlanta location and realized it said there that it could be made vegan by removing the Parmesan. We would love if they just used vegan Parmesan since even dairy Parmesan is not vegetarian due to how it’s processed. 🙁  Here’s the description from the menu:

I think this is a case of a mix-up with the menu board that Disney had made for Local Green when they came here, as well as the crew aboard the truck being used to the Elote being marked as vegetarian. So there was definitely some confusion with that and if you went there before today (March 27, 2022) you may not have been aware there was dairy cheese being used on the corn.

This was actually the reason for my visit (it was on my list, but I wanted to confirm the corn ingredients in person) so I wanted to share the news with everyone. [Thanks to Melissa from VeganDisneyWorld.com for sharing the heads-up about the Parmesan so we could investigate further. #VeganTeamwork 😀 ] I spoke with folks at Local Green Orlando and they said a new menu board is being ordered. So be aware and ask for no Parmesan if you try the Elote.

On our visit they were out of the Badu and the corn, but I did try the Oh Boy Burger and the Bubba Sparxx along with the fries and the Kryptonite smoothie since we were there. 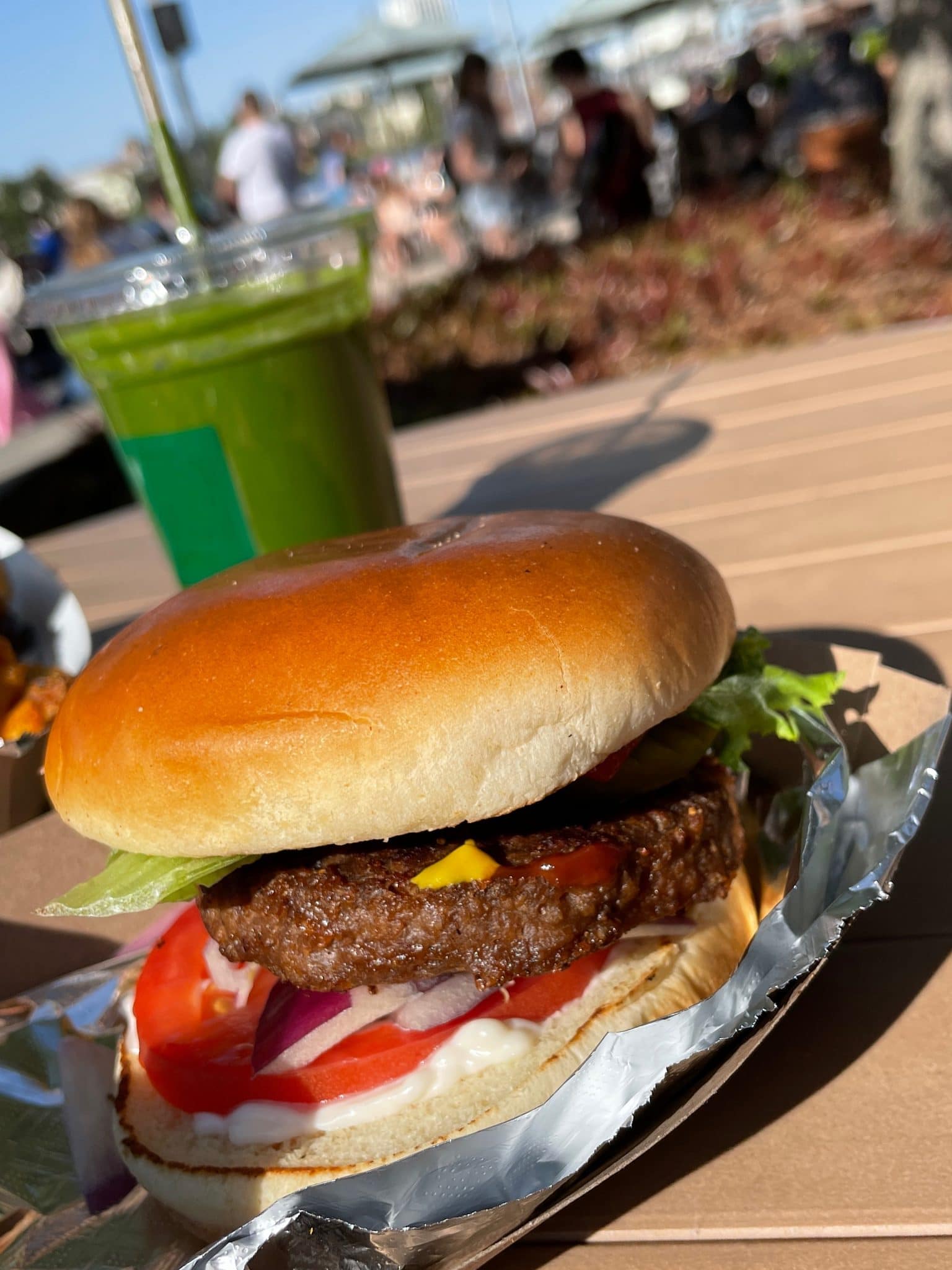 The Oh Boy Burger was a basic Beyond burger, served with pickles, lettuce, tomatoes, onions, ketchup, mustard, and vegan mayo, on a vegan bun. It normally comes with vegan cheese, but they were out when we visited too. This is also available as a kids meal, which comes with the fries for $7.99. 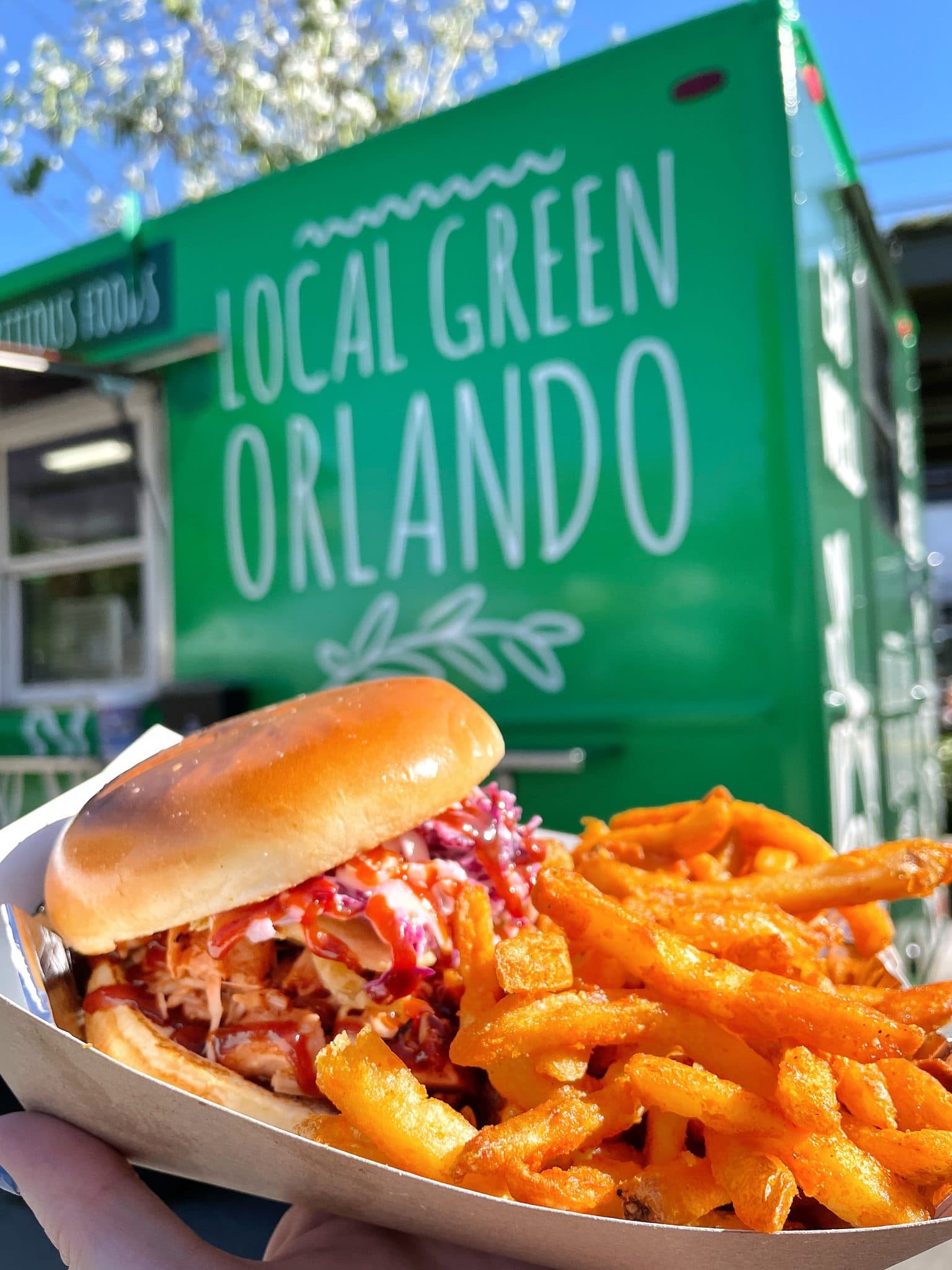 The Bubba Sparxx is a great option for those missing pulled pork BBQ. I never really ate that even back when I ate meat, and I’m not the biggest jackfruit fan. I will say that it’s better than most jack-fruit only dishes I’ve had, and the bbq sauce was DELICIOUS. Give me a cup of the sauce with the fries, and I’m in heaven. (I’m not sure if that’s even possible, but I’d definitely ask next time.) 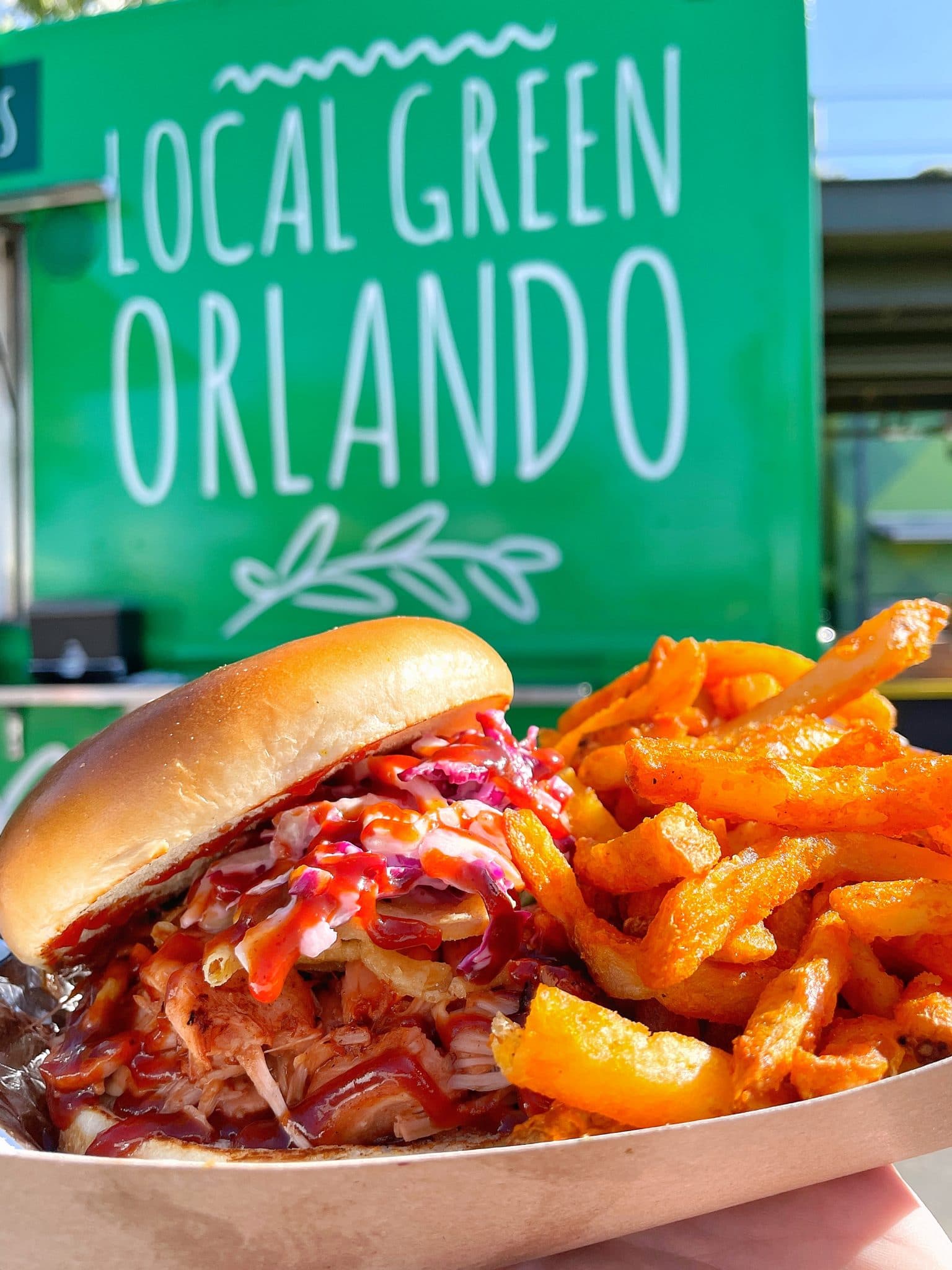 The vegan Air Fries are worth a visit to Local Green Disney Springs alone. Some of the best seasoned fries I’ve had as far as the flavor goes, and totally vegan! 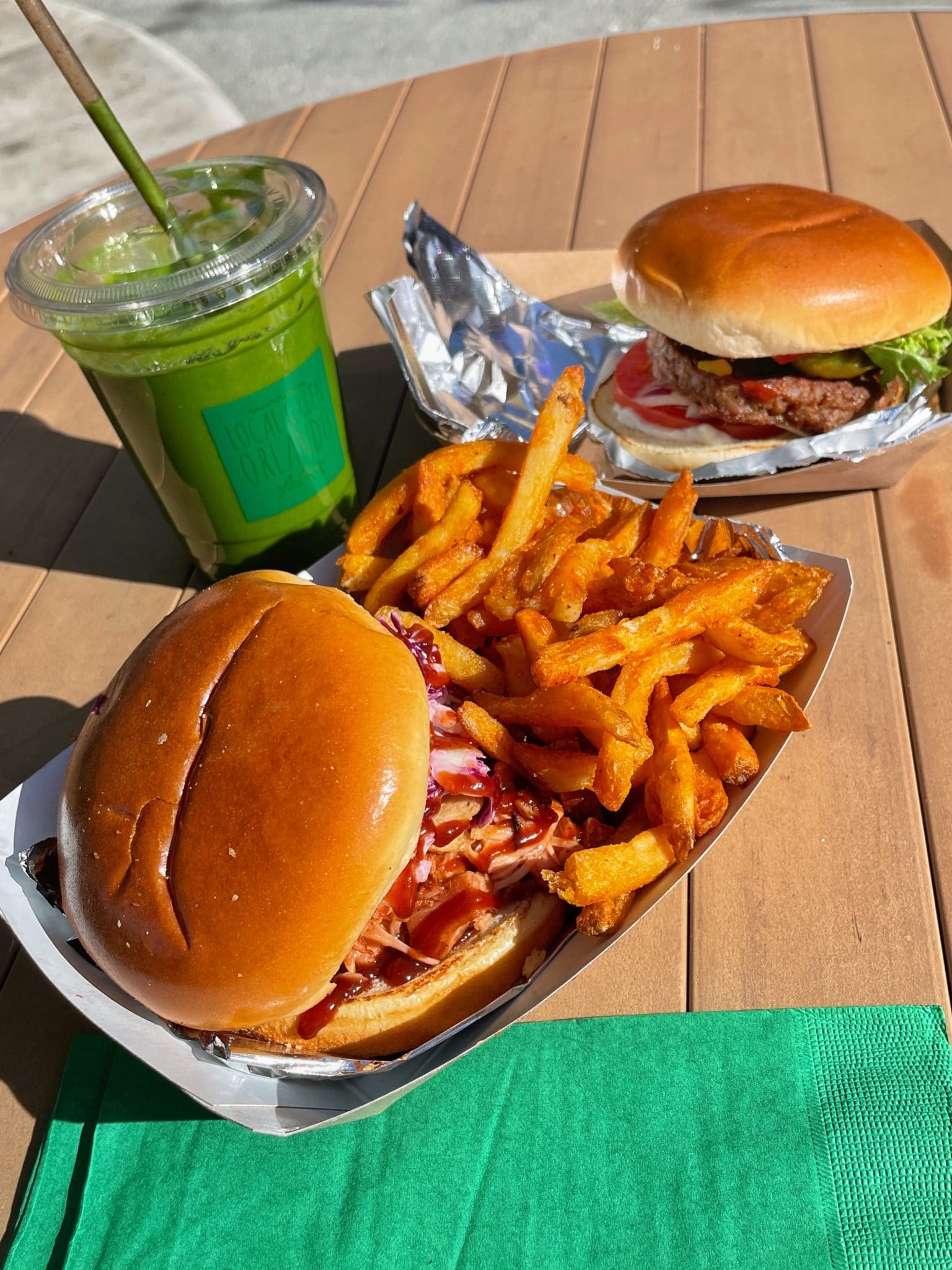 The Kryptonite smoothie was very delicious for those that like that kind of green juice taste. Definitely better for you than a Frappuccino too! It contains kale, spinach, banana, mango, coconut, water and chia seeds. I would definitely go back and try the other drinks. They were out of the Cell Therapy and I got the last Kryptonite when I was there. The Cell Therapy contains strawberry, blueberry, banana, apple juice, and chia seeds. The Green-Hito lemonade is cucumber and cilantro infused lemonade with organic sugar added. Lastly, the Strawberry lemonade is strawberry and min infused lemonade also made with organic sugar. Can’t wait to try those. 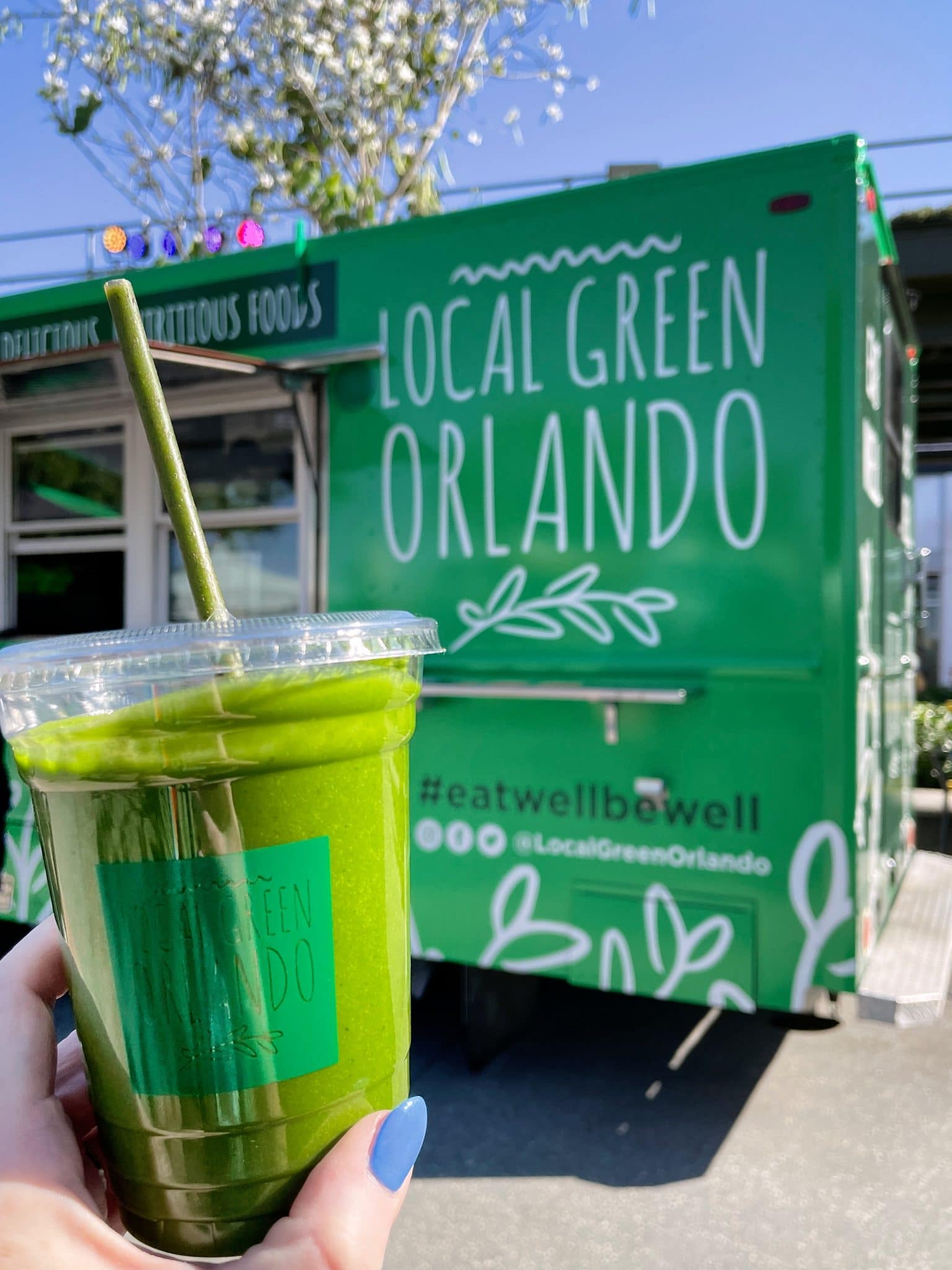 As with all food trucks, things sell out. That’s a great thing, especially with a predominantly vegan spot and a black-owned business which is great to see at Disney Springs. Don’t get discouraged if they are out of something when you visit, they also just changed their hours so now they are there from 11am – 10:30 (although the My Disney Experience app says noon – 10:30, so just be aware of that). However, the vegan menu issues at Local Green in Disney Springs are concerning and should’ve been addressed in the weeks they’ve been open. From our experience, we had to ask a few times before finding out it was real Parmesan. That’s very concerning for those with dairy allergies. Hopefully they educate the staff on the vegan options at Local Green Orlando, to warn people that try to order between now and when the new menu comes in.