We thought this menu change might be coming with the announcement at the end of last year that Disney would be taking over management of the Morocco pavilion in EPCOT’s World Showcase. Formerly, the Kingdom of Morocco held ownership and management of the shops and restaurants within the pavilion. With the changeover, we now have a new menu for Spice Road Table of Mediterranean Small Plates, including 4 vegan options!

Spice Road Table is located on the waterfront of World Showcase lagoon inside the Morocco pavilion at Epcot. Right now they are not accepting dining reservations, but they also aren’t really necessary. Maybe that will change with this new menu. 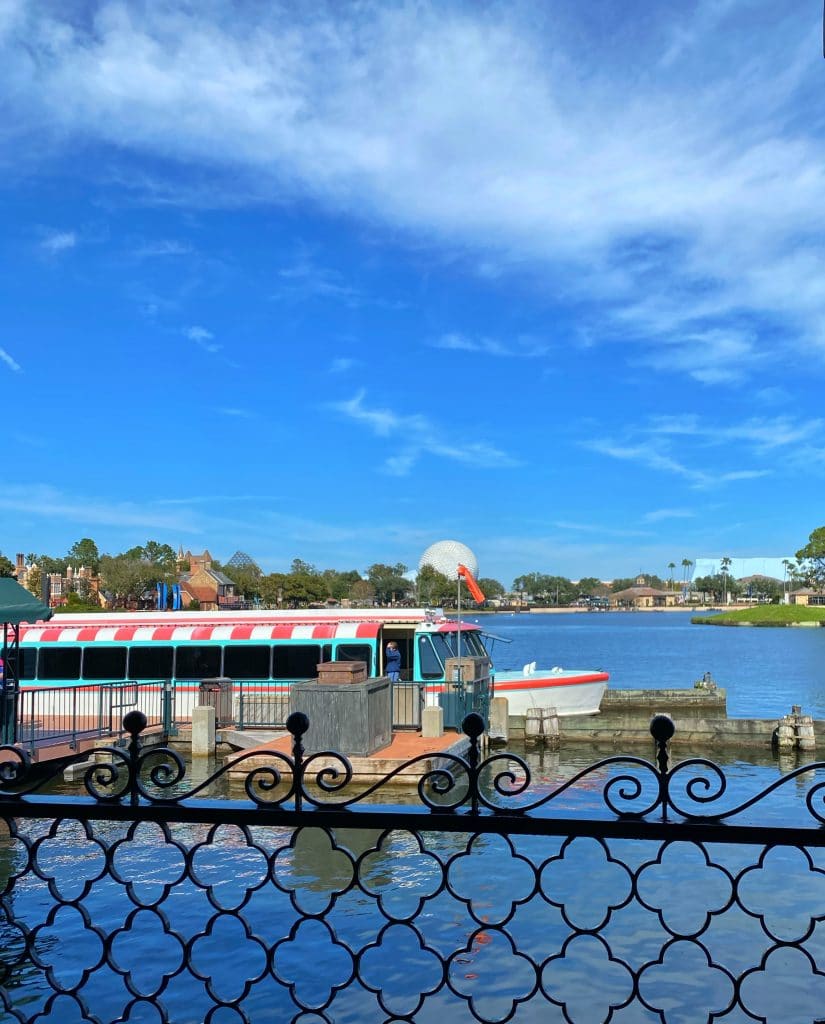 Because this is now a Disney-owned and run restaurant, they are considering it a new opening, so no discounts are available at the moment, but they may offer them in the future so keep checking. Also, because it is a new opening, they may still be working out some kinks, so be patient with the new staff. After speaking to a chef, we were able to confirm 4 different vegan options, two of which are modified.

Let’s see what to order!

First up is the fan favorite, hummus fries. When we went to Spice Road Table today, our waitress thought the hummus fries used egg as a binder. We spoke to a chef who confirmed that there were NO eggs in the hummus fries (they briefly had a vendor which did use egg but switched to this recipe which does not). *Note: we re-confirmed this and have seen a photo of the ingredients list directly from the manufacturer of the hummus fries, there are no eggs in them, only: Ground chickpeas, water, garlic, chipotle peppers, harissa chili pepper sauce, salt, and spices. 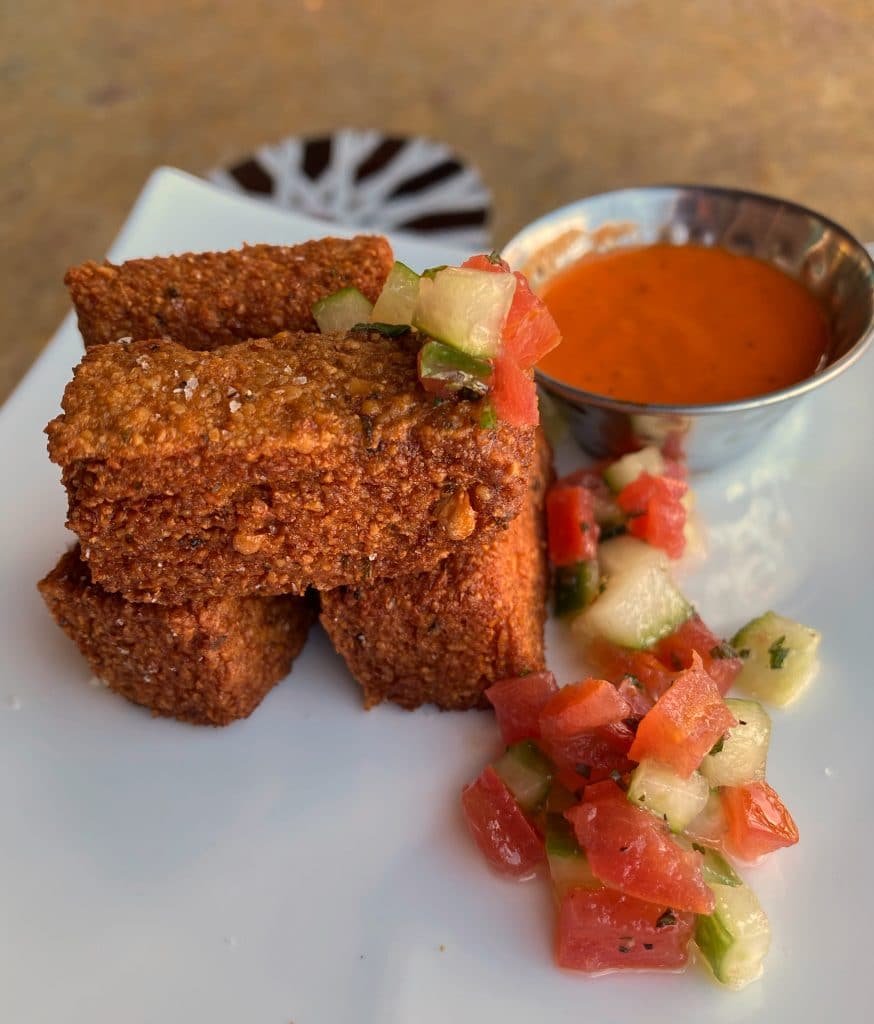 The Citrus Chipotle sauce does have dairy in it, but he suggested we try a side of the same Aleppo pepper sauce used with the Cauliflower below, which was a great option. This further proves the importance of speaking to a chef when you are ordering, as they will have the most up to date info and ingredients list.

These fries are fried to perfection and have just enough spice to give them a kick. This new version has the hummus fries coming out much smaller, but they are much easier to manage and, lighter and “fluffier” than the heavier hummus fries from the Epcot Food & Wine Festival and previously served at Spice Road Table. 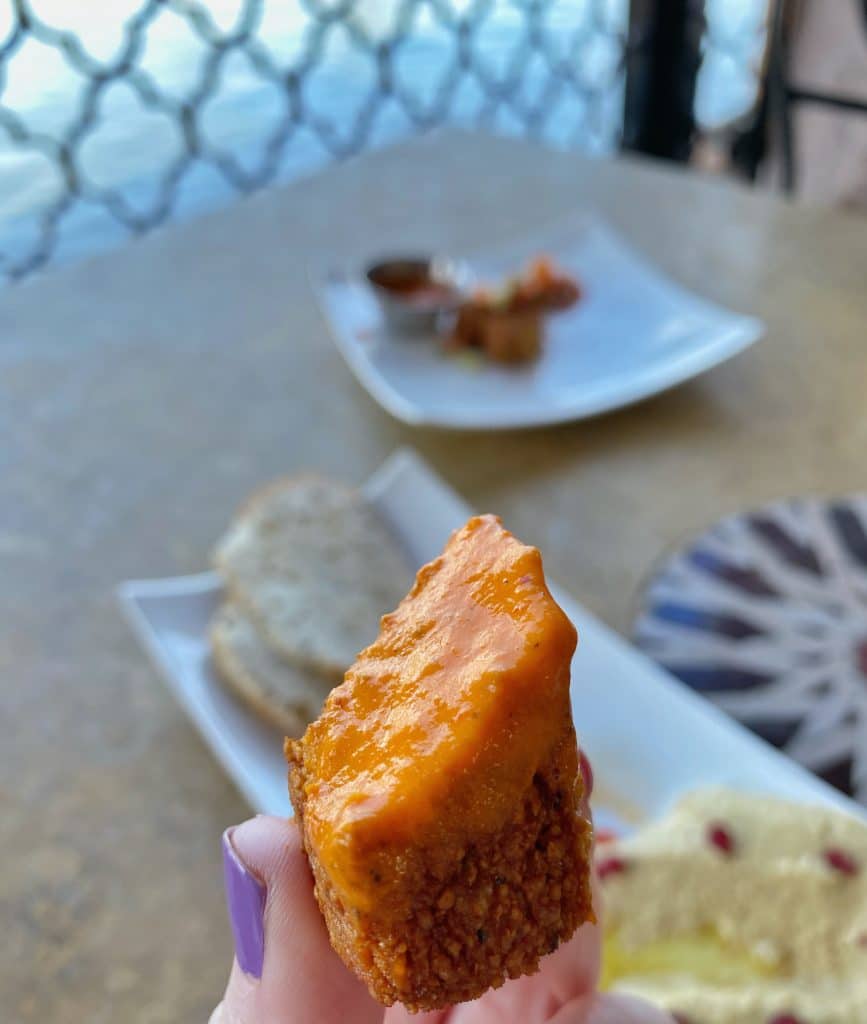 Next up, a newcomer – vegan crispy cauliflower with a red pepper Aleppo sauce and pomegranates. They are as amazing as they look! These come with 4 pretty large cauliflower florets batter fried and coated in the Aleppo sauce. 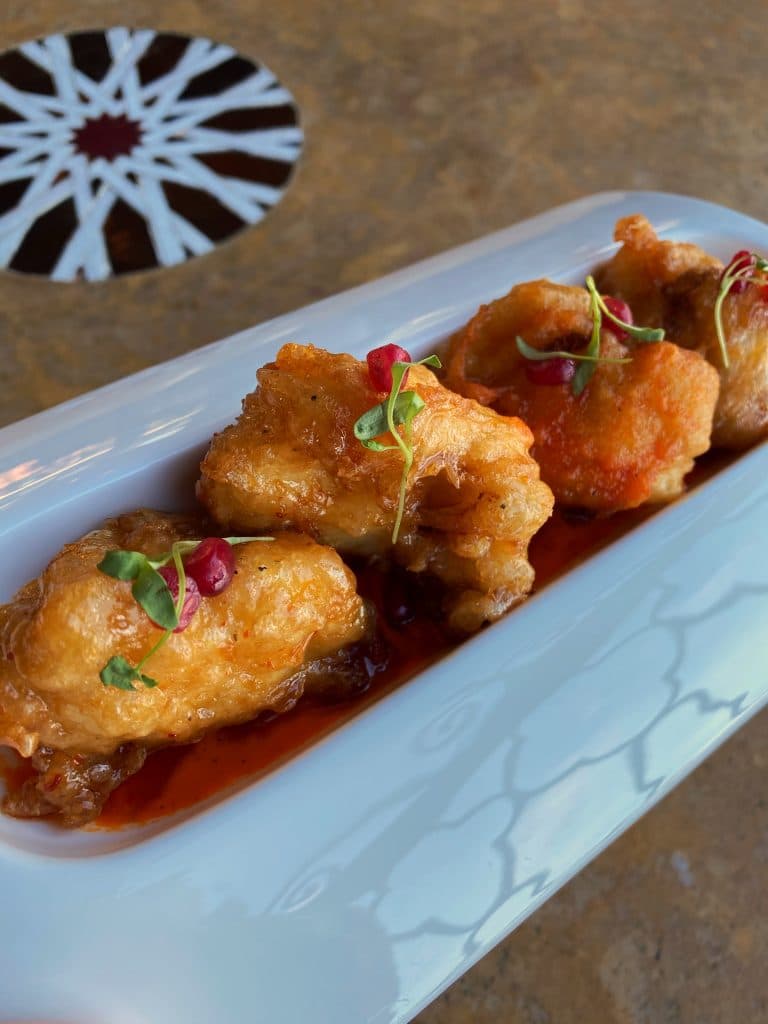 Our advice? Order a couple of these Crispy Cauliflower items, they are amazing and you might not want to share! 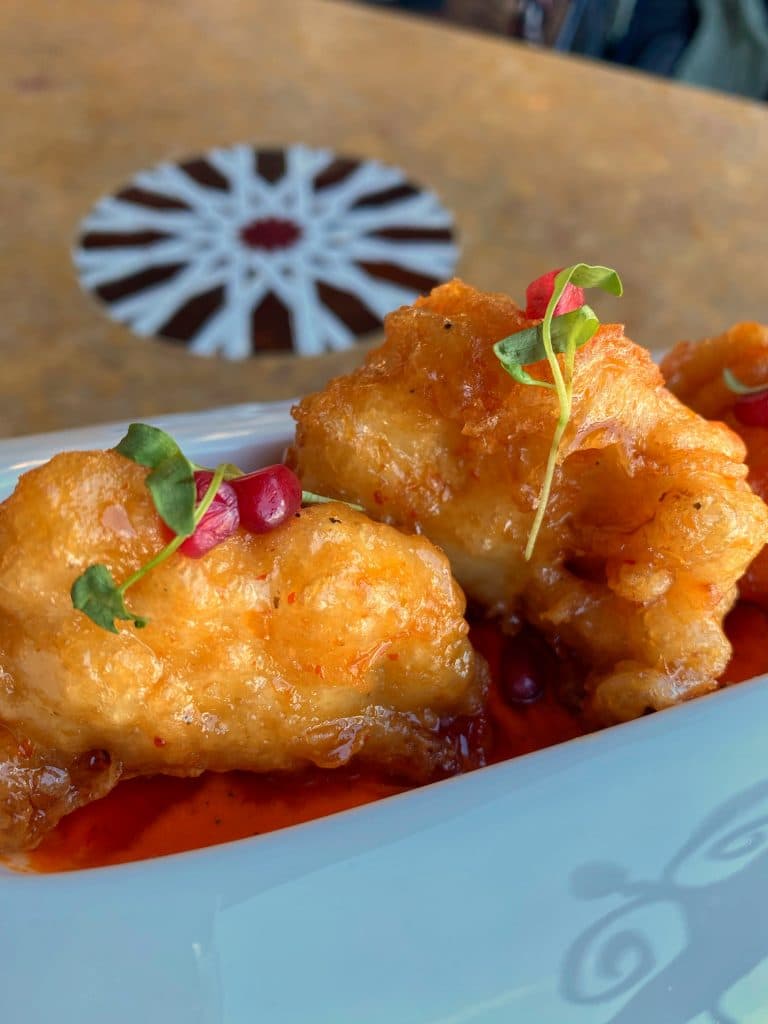 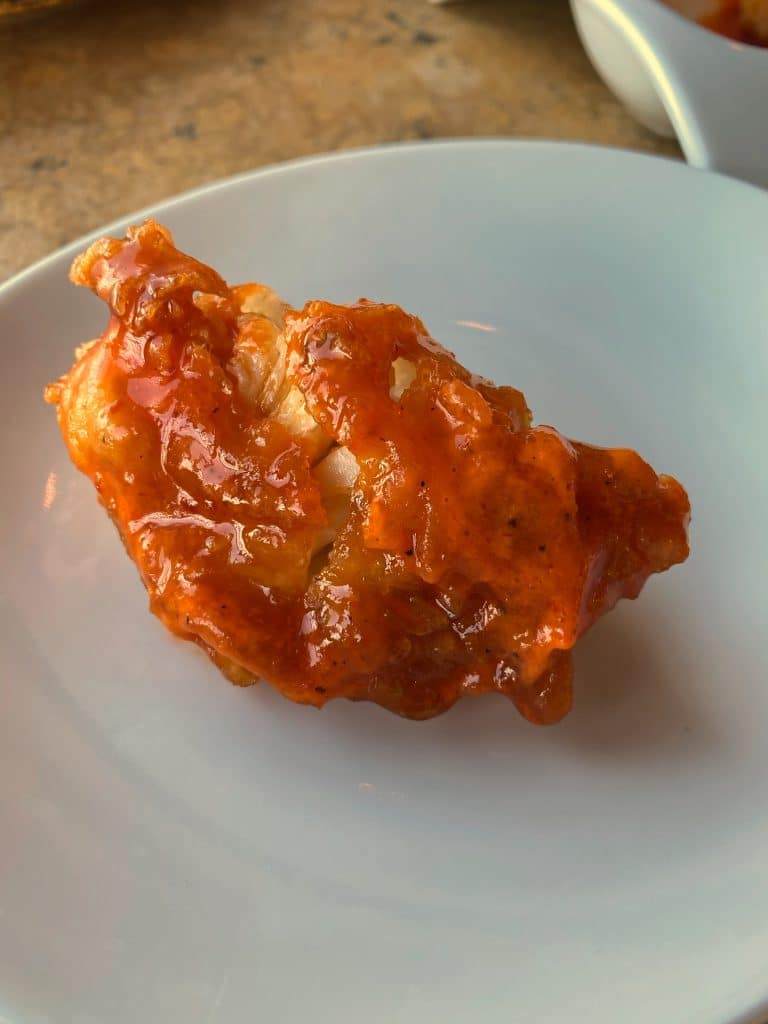 Another classically vegan dish that has been around with Spice Road Table for a while – stuffed grape leaves. From the looks of the previous offering, it appears that they are switching up the Dolmas for the new menu. The new dish is super lemony and packs a lot of flavor in. The leaves themselves are not too thick or bitter and they really make a great item for sharing. 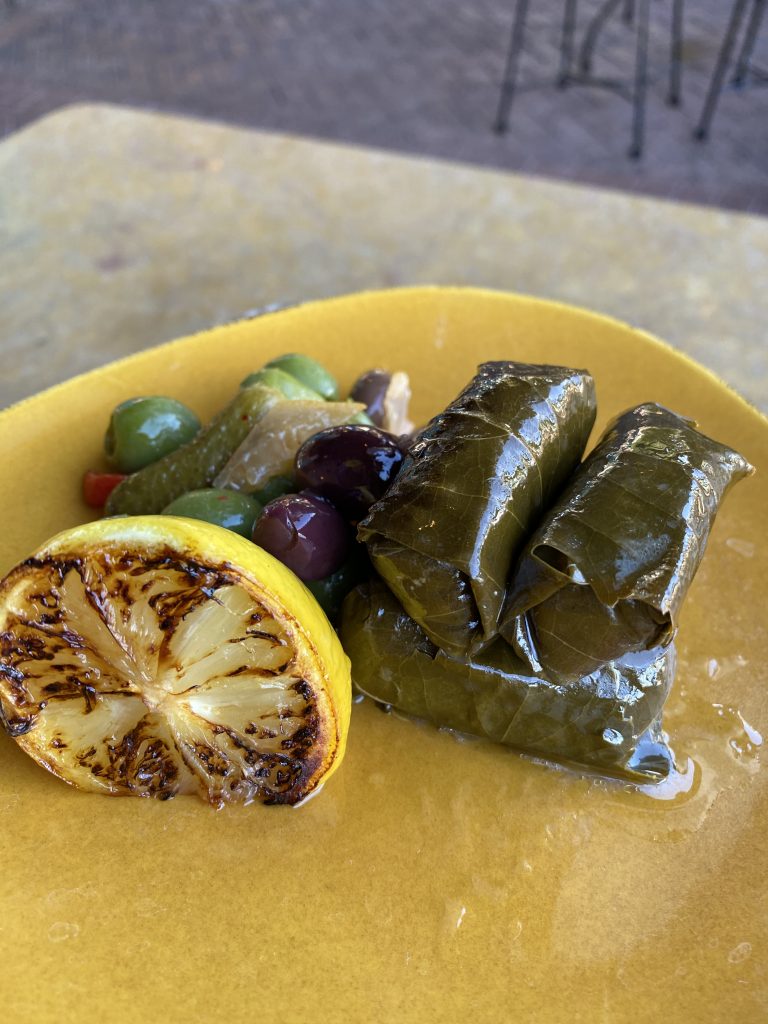 Finally, we asked our waitress about modifying the Naan Spreads to remove the naan, hoping we could just get some carrots or something. She let us know there were no alternatives and we couldn’t order it because there would be nothing to dip into the hummus or Za’atar. When the chef arrived, he suggested this to us before we could even ask. He confirmed that they DO have a multi-grain bread that you can replace the naan with, and still enjoy this dish. 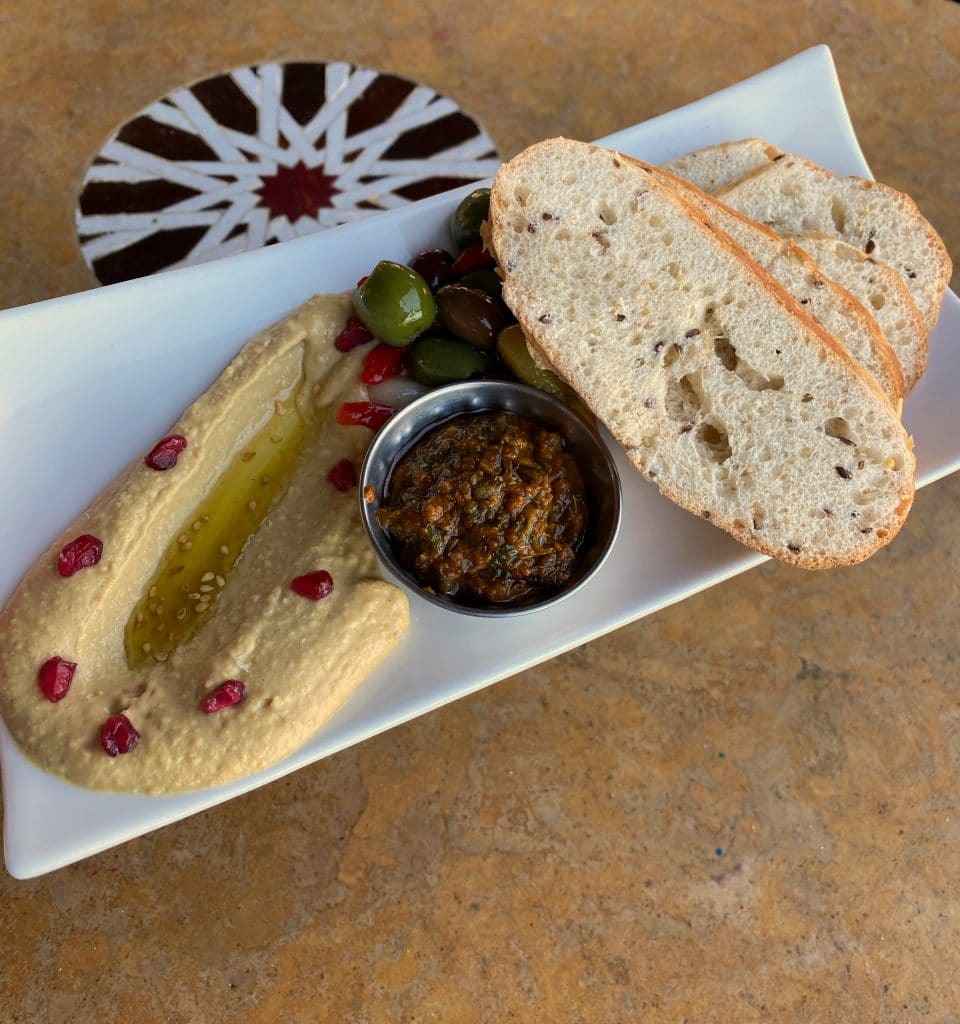 We are so glad we didn’t let this one slip by. The hummus was worth the wait, while the Za’atar (traditionally a blend of savory dried herbs like oregano, marjoram or thyme, and earthy spices like cumin and coriander, with sesame seeds, salt and sumac) dip was something we wanted a huge bowl of to enjoy. The multi-grain bread was nothing spectacular, but again, worth being a conduit with which to enjoy the spreads!

UPDATE: We just went back this past weekend and they have now improved on the multigrain bread by brushing it with olive oil and toasting it. What a difference it made! I could now eat the bread just by itself, but of course, adding the hummus and delicious za’atar makes this a close second to the cauliflower! See the new photo below: 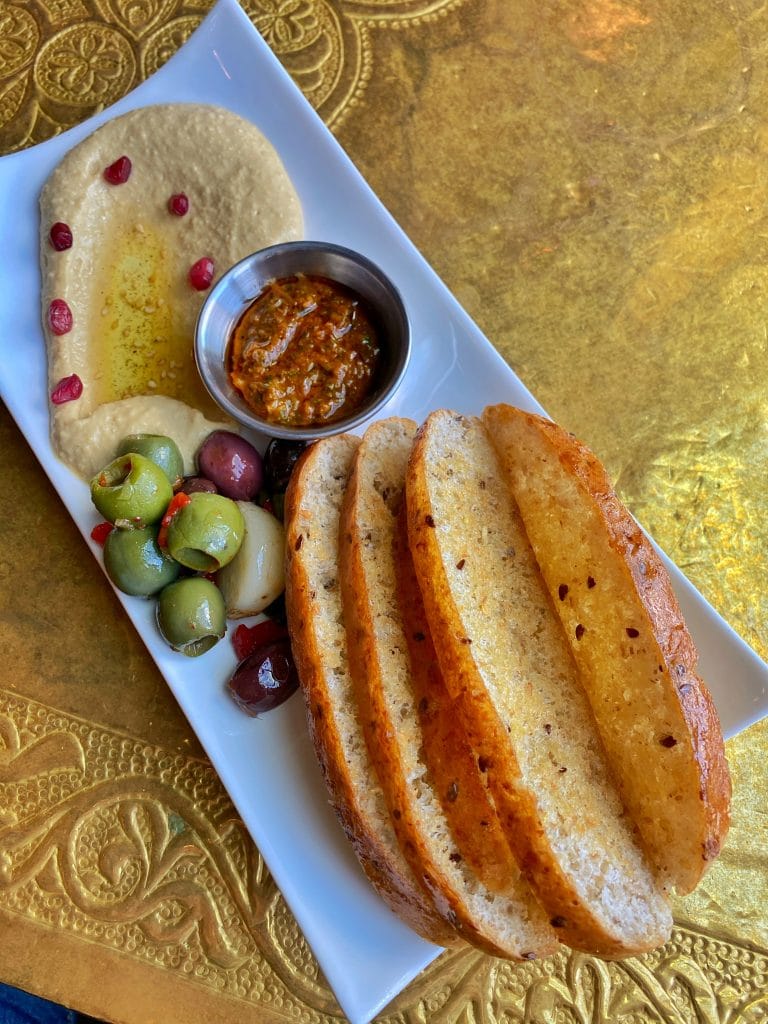 While personally, I am not an olive fan, even I had to admit the olives were great in their marinade. Those who ARE olive fans, will appreciate them more than me I’m sure! 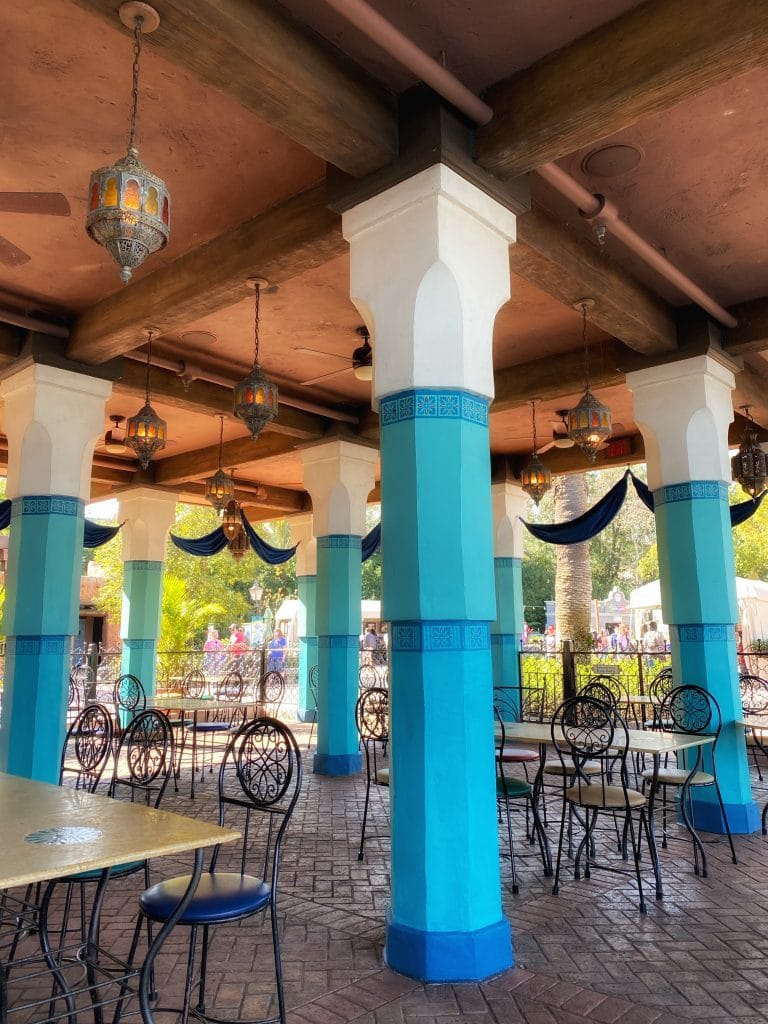 Also see what’s in the just opened Snack Cart in Morocco at EPCOT. You can watch our video review as well for more looks at these Spice Road Table ‘Small Plates’ vegan items:

Let us know what you’re most excited to try?!

Looking for ALL of the vegan options available at Epcot? Check out our comprehensive guide here: What’s Vegan in Epcot?