If you’re looking for an up-to-date and fully comprehensive guide to ALL of the vegan options at the NEW 2022 Epcot International Food and Wine Festival at the Walt Disney World Resort in Orlando, Florida, you’ve come to the right place! The 2022 EPCOT International Food & Wine Festival is going to be the longest-running food and wine festival – from July 14 through November 19. Keep in mind – some booths won’t be open until August 15.

Looking for the vegan beers and wines at the 2022 EPCOT Flower & Garden Festival? Keep reading! 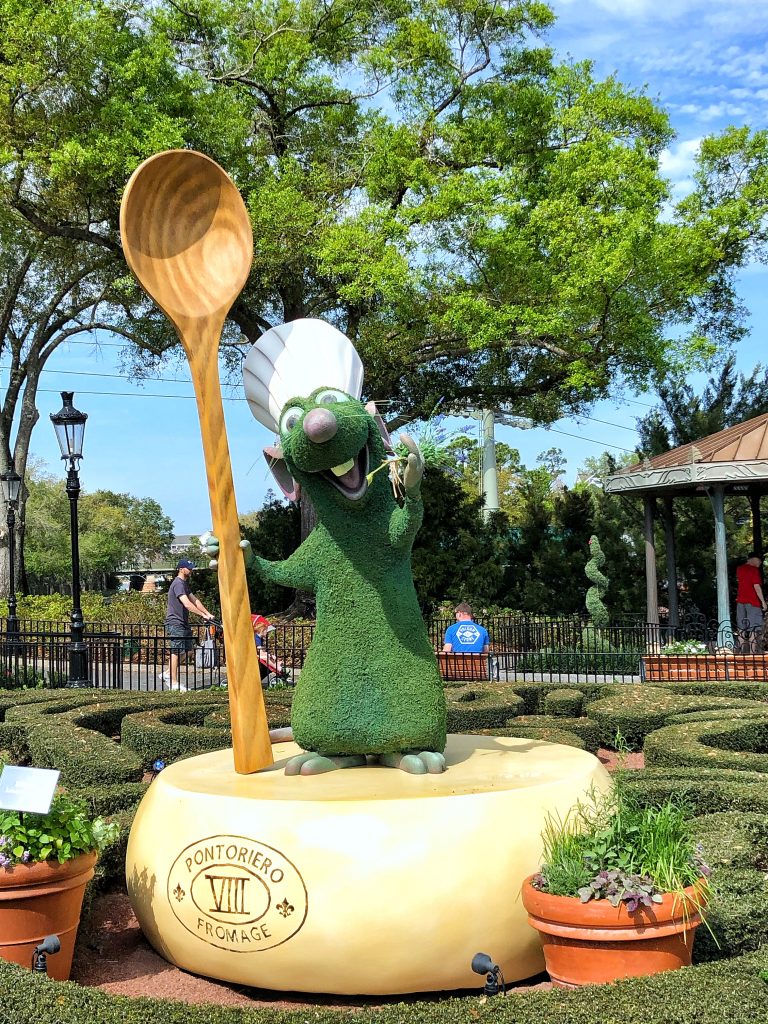 We’ll have a complete list to guide you through this year’s full festival including all the vegan “as-is” dishes as well as the easily modified vegan dishes you are going to want to sample while strolling the World Showcase promenade in Epcot. Right now, the official menus are out, so we’ve updated the list below with all the vegan options, so if you see some booths missing, that’s why – you can view the full list on Disney’s site. They just announced menu items so we’ve updated below. We’ll continue to update as we find out what can be modified. Bookmark this page, as we’ll be adding to it as soon as we get the info.

The Walt Disney World Resort announced that the Epcot International Food & Wine Festival will be starting on July 14th, and will run through November 19th 2022.

This year the festival will include a total of 29 food kiosks with some opening on August 15.

Delight your appetite with mouthwatering morsels, nibbles and noshes from these year-round food stops—each offering special menu items in addition to the regular menu.

Below is the updated list of vegan menu options for 2022, with photos. We’ll update when the festival opens with more photos. NOTE: if a booth doesn’t have any vegan options, we don’t list it below.

We are listing the beverages and if it is known if they are vegan. We have researched every listed option and looked for its vegan status on Barnivore, or directly with the brewery/winery. Please note this is based on what I personally found and I am not infallible. I have done my best to confirm what is truly vegan. For cocktails, I didn’t note anything without knowing ingredients, but you can ask when you get things, if there is honey, etc. Some places have not responded, but if they do I will update the list.

Vegan Options at the 2022 EPCOT International Food and Wine Festival 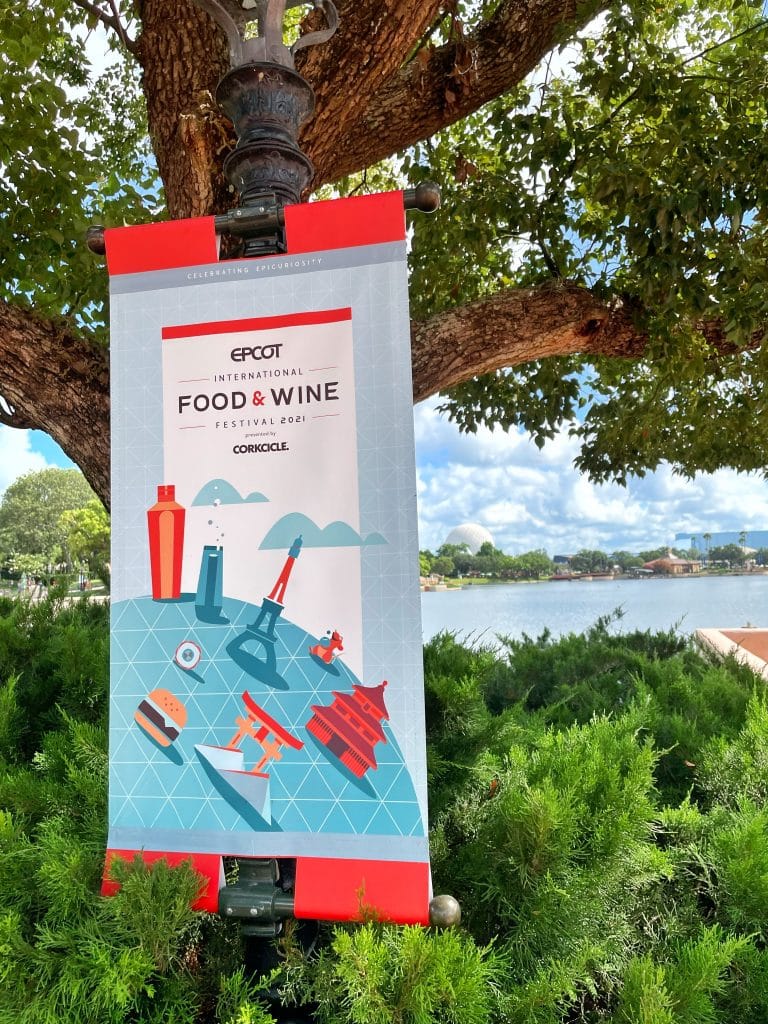 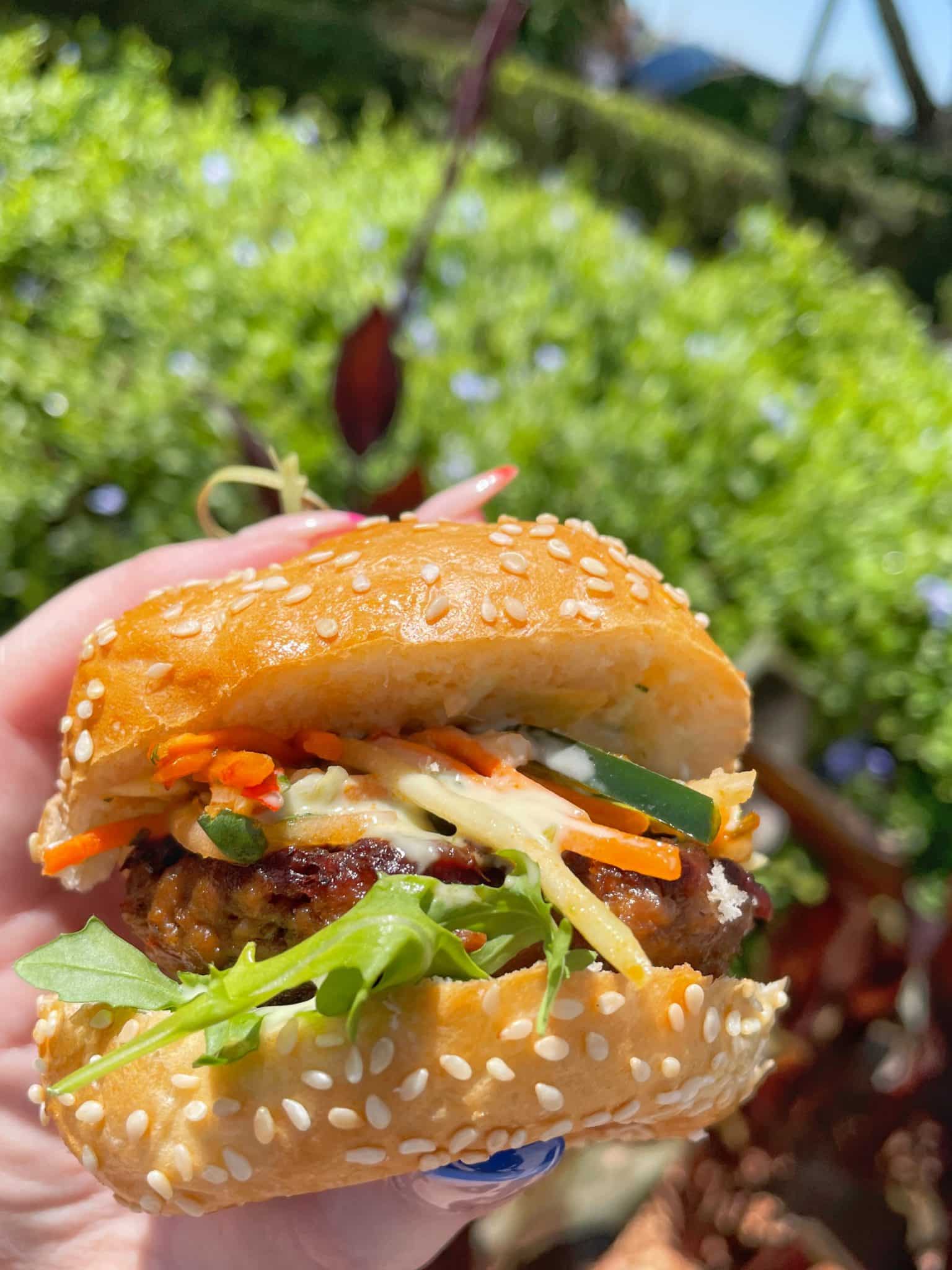 The Impossible Burger Slider returns and can be found at the only “all vegan” booth at the 2022 Epcot International Food and Wine Festival…Earth Eats.

Earth Eats hosted by Impossible™ (Between Imagination! and Refreshment Port) 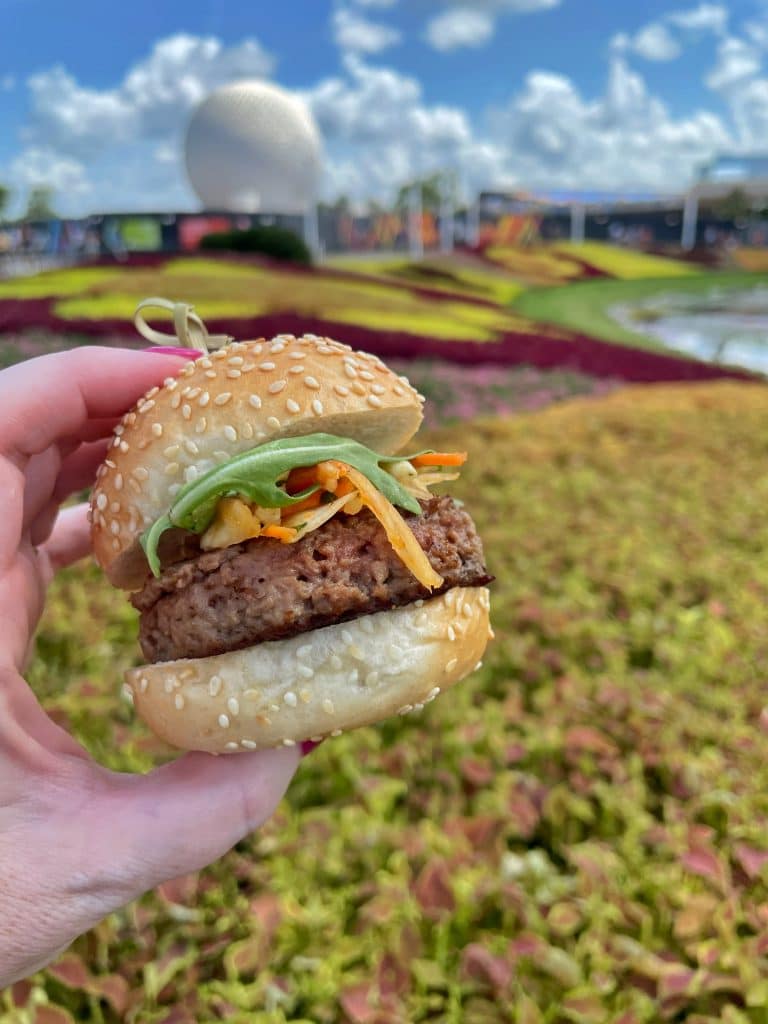 The slider is served on a sesame seed bun and gets a slathering of vegan wasabi cream and a topping of spicy asian slaw. It’s so so good, with just the right amount of spicy and the toasty flavor of the sesame seeds on the bun is the perfect complement. 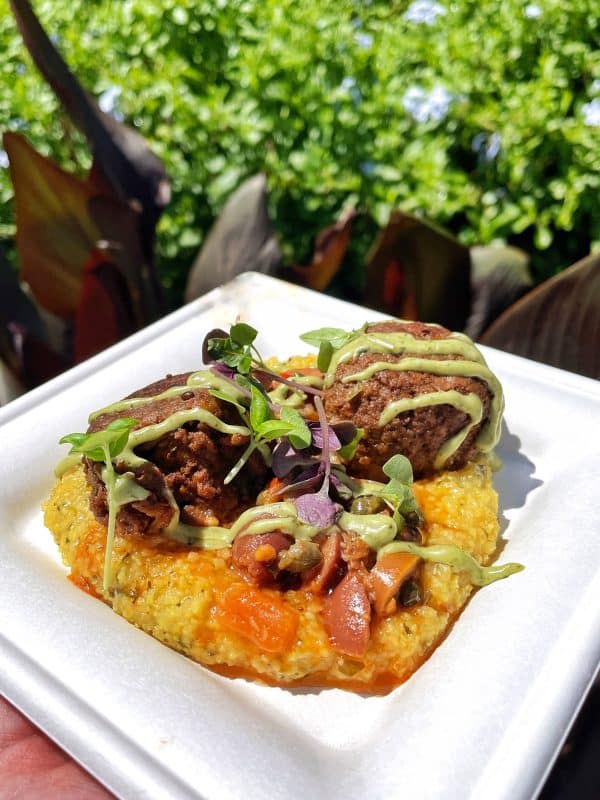 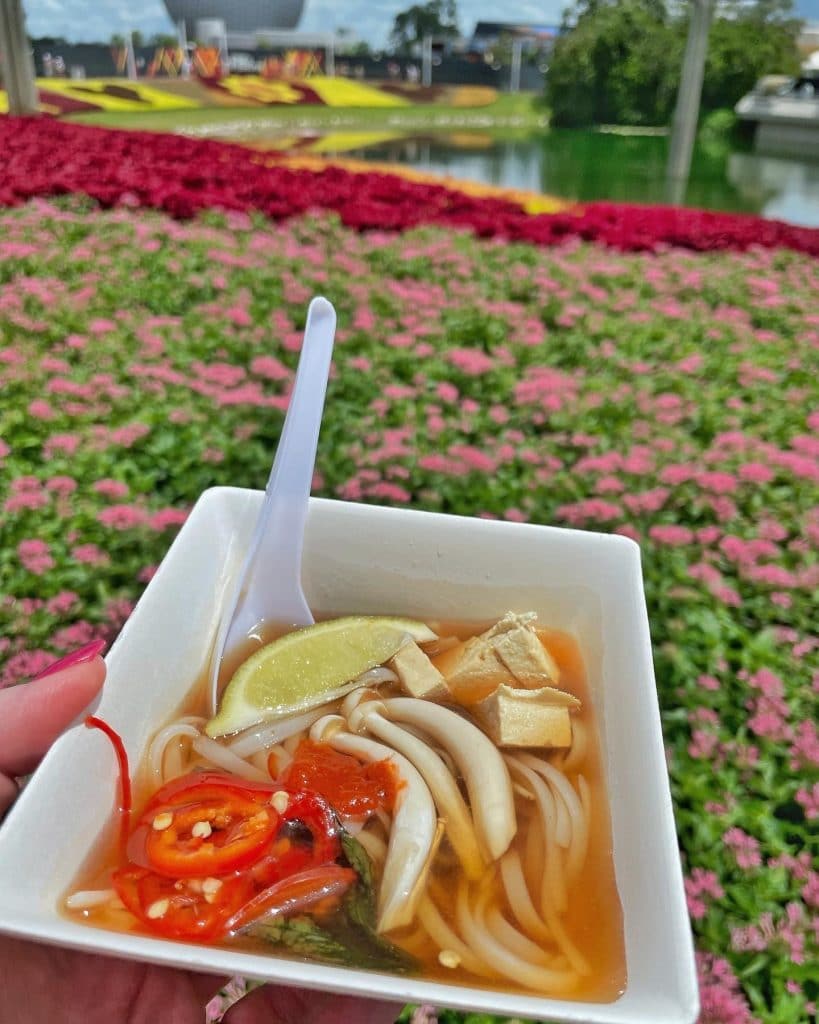 This is our second pho, the first one, pictured below, came with no mushrooms and no sauce. So if you don’t want any of the components, you can ask to leave them off. This was so spicy and full of flavor. I’ve always loved spicy food, but in recent years I have less tolerance so this tested my limits haha. But if you like spicy, you’ll probably enjoy it! 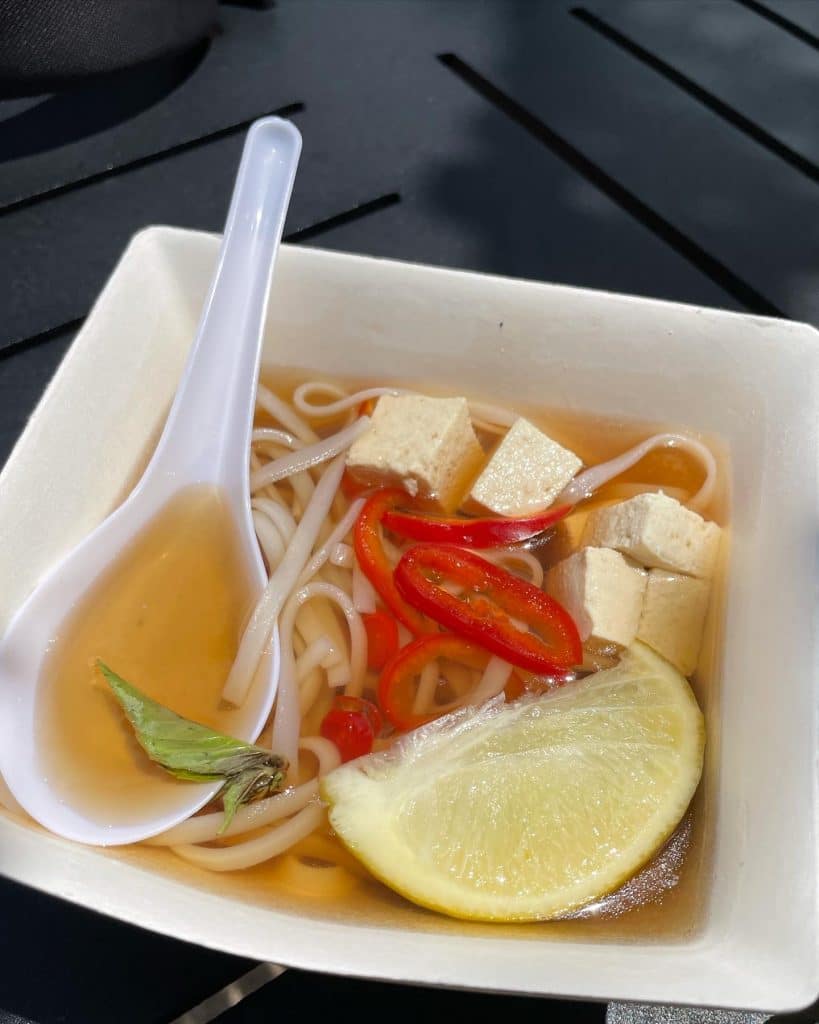 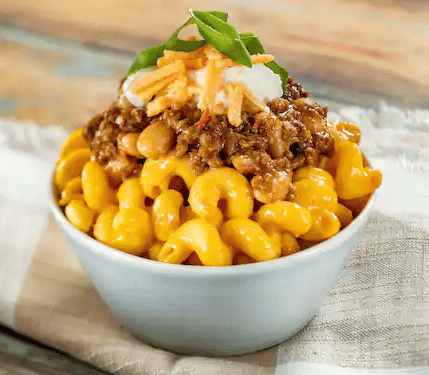 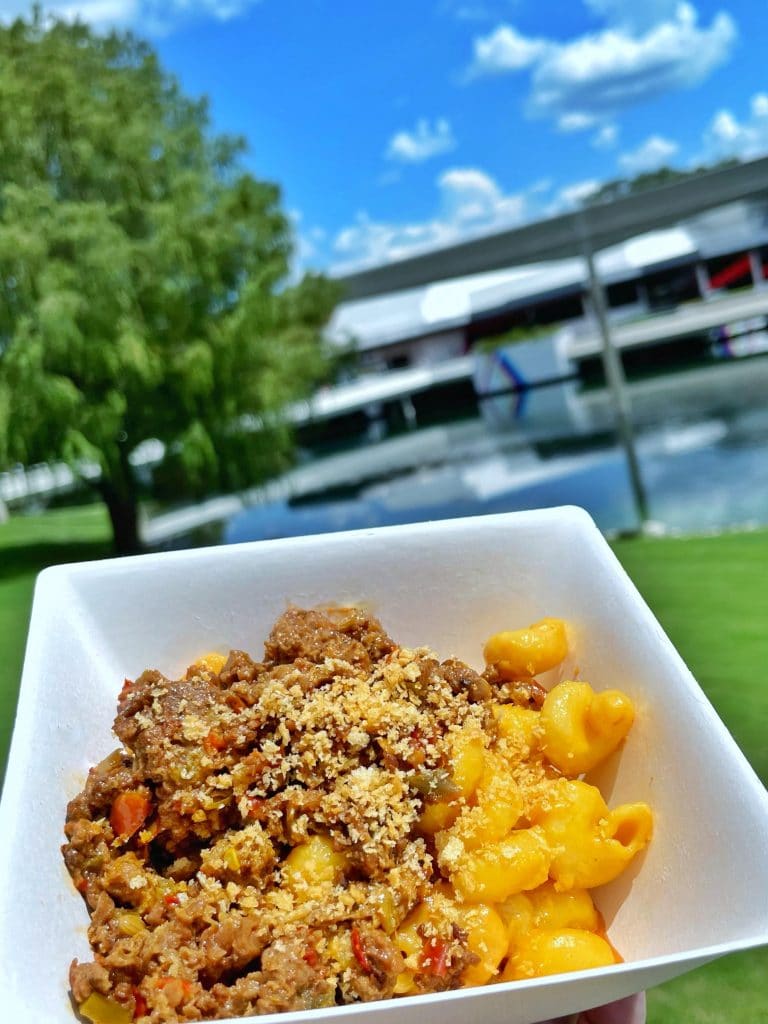 NEW BOOTH for 2022: The Fry Basket (Near Test Track presented by Chevrolet) 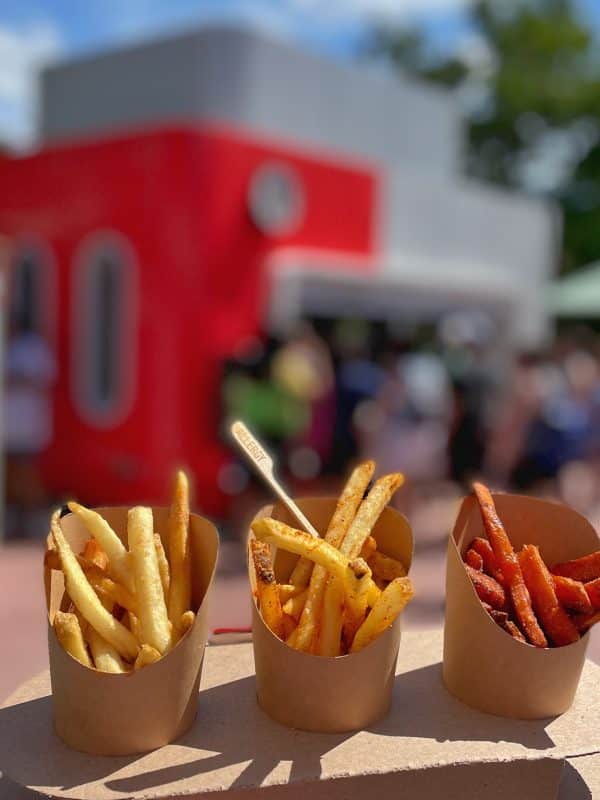 This is the modified fry flight – left to right sea salt and vinegar fries, BBQ fries (modified with no bacon or aioli), and sweet potato fries (modified to just have the maple bourbon glaze). Honestly, unless you are a huge fry fan, I would save your money on this one. They aren’t too spectacular and none of the seasonings/flavors really came across (this could be an opening day issue though).

We loved the Adobo Yuca Fries, however and would definitely get these again. The garlic aioli here is full of garlicky goodness and really makes the yuca fries a fun option. 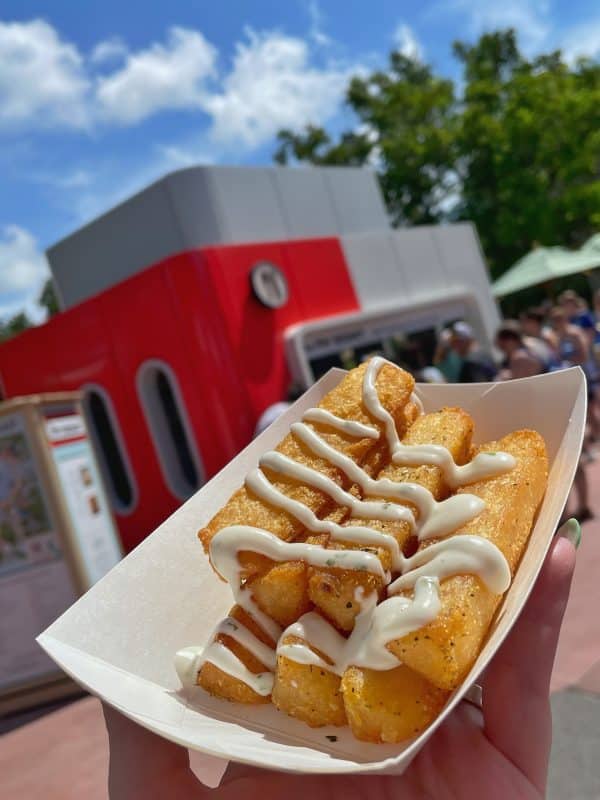 Flavors from Fire (Near Test Track presented by Chevrolet®)

Brew-Wing at the EPCOT Experience 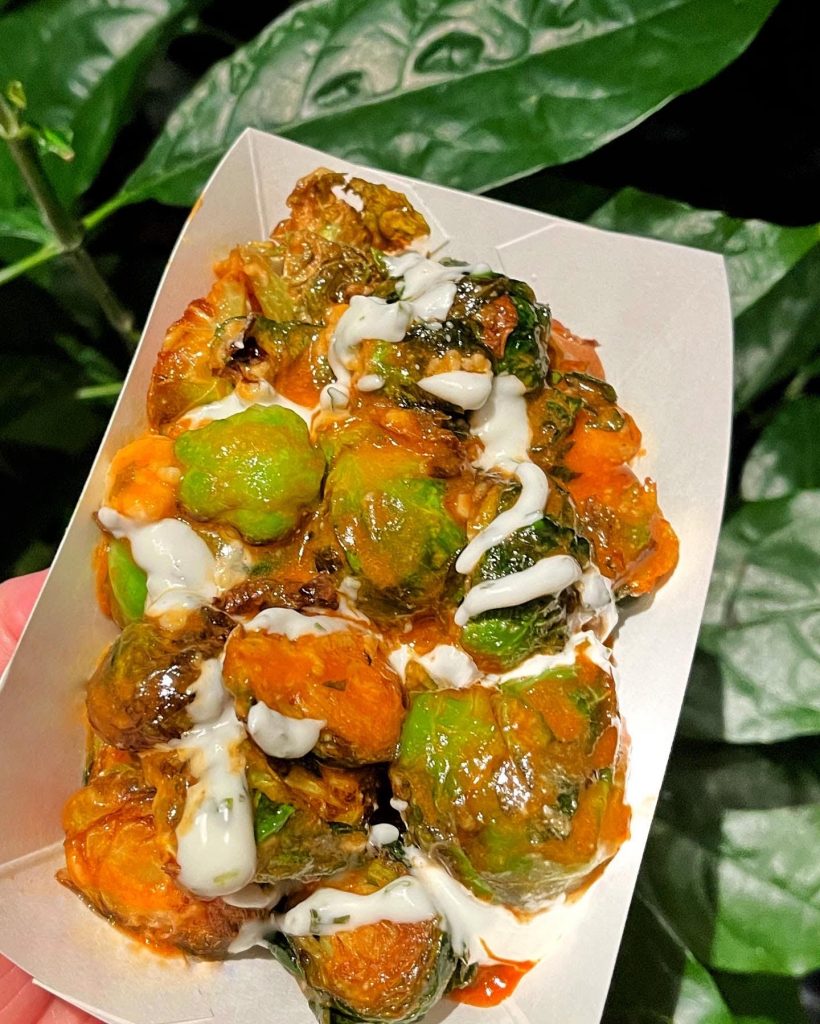 I’m leaving last year’s photo of the Buffalo Brussels Sprouts up because the sauce was perfection. On opening day, there was not a lot of sauce, so I will watch for other’s photos and if it seems like they are using less sauce, I’d ask for more next time. They were so well cooked though and still tasted wonderful, just not very buffalo-y. 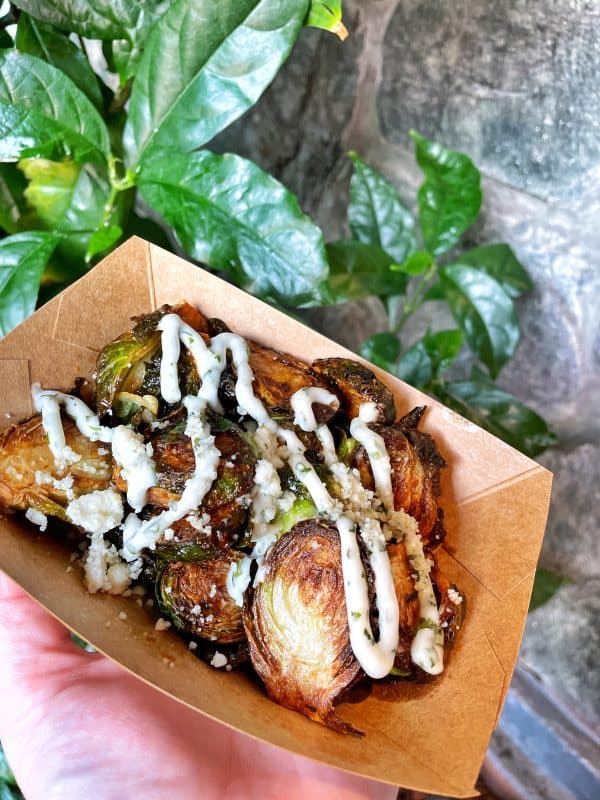 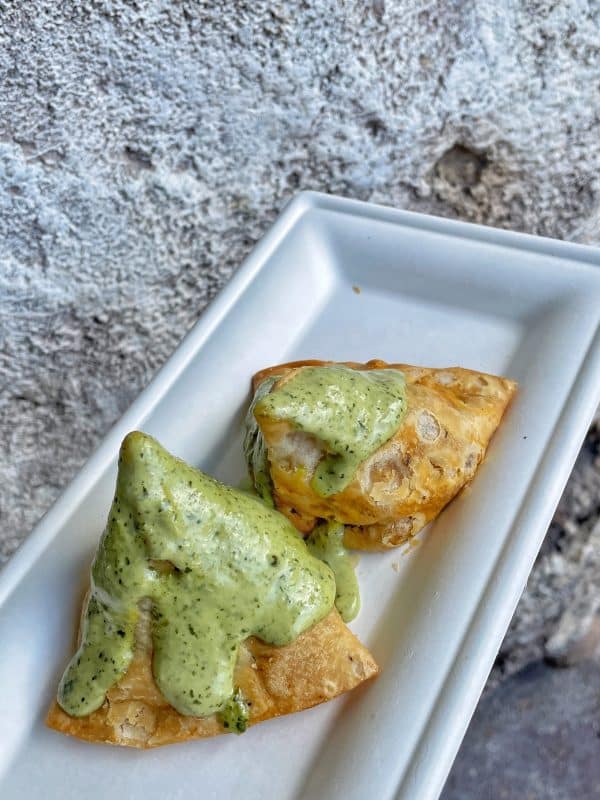 Refreshment Outpost (between China and Germany)

The base here was new last year, from the yellow rice pilaf. The quinoa and ancient grains we had were a little underdone, but we think that’s just opening day issues, and I’d definitely get this again, when the weather is cooler. I love all the different vegetables and flavors. 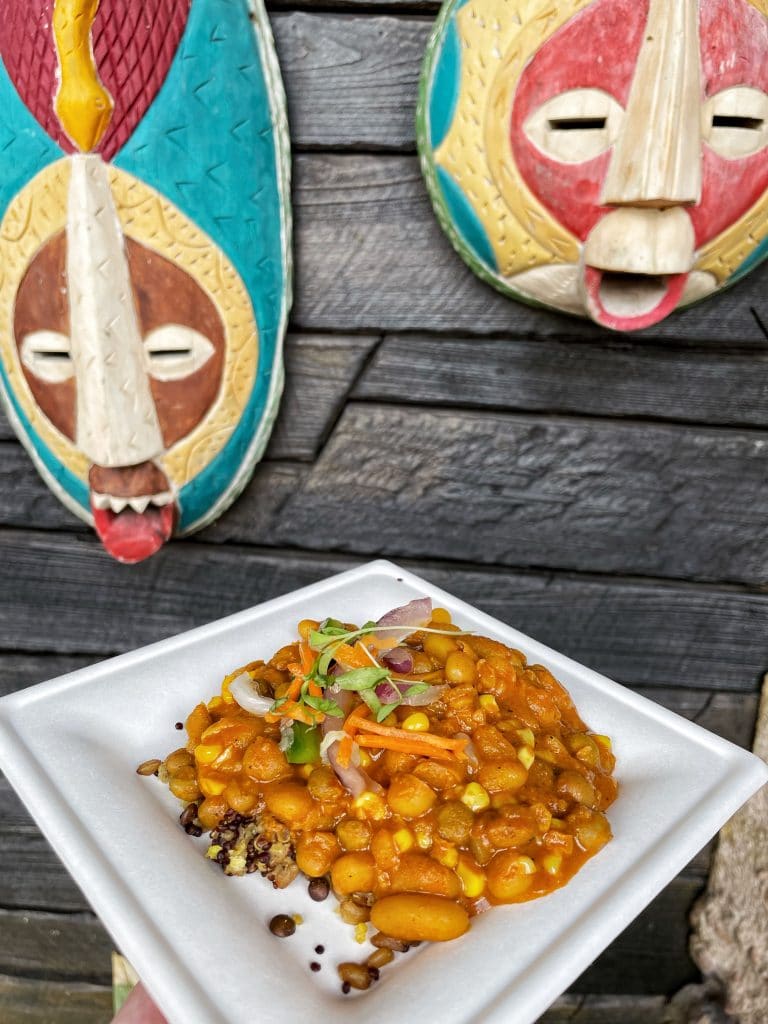 The Spicy Kenyan Vegan Githeri replaced the lentil stew In Africa in 2019. The stew was a favorite of many. Its replacement is stellar though.

The Spicy Kenyan Vegan Githeri was previously composed of curry rice pilaf, white beans and pigeon peas and is topped with a kachumbari slaw and micro greens.

The Alps (in Germany)

Spain (Between Italy and Germany)

Tangierine Café: Flavors of the Medina 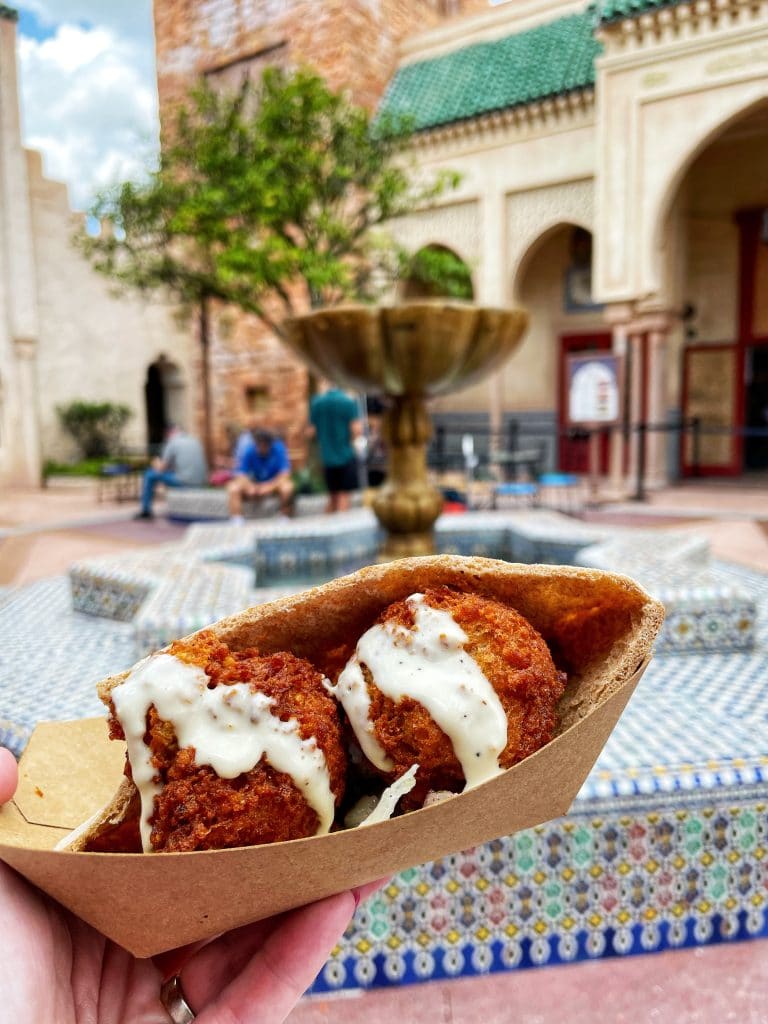 This was a new favorite last year. These were the lightest, airiest crispiest falafels I’ve ever had! Granted, ours were made fresh because the people before us ordered 6 sets of falafel and they ran out haha. But they were delicious regardless! The sauce was so good. I can’t wait to go back and get more. 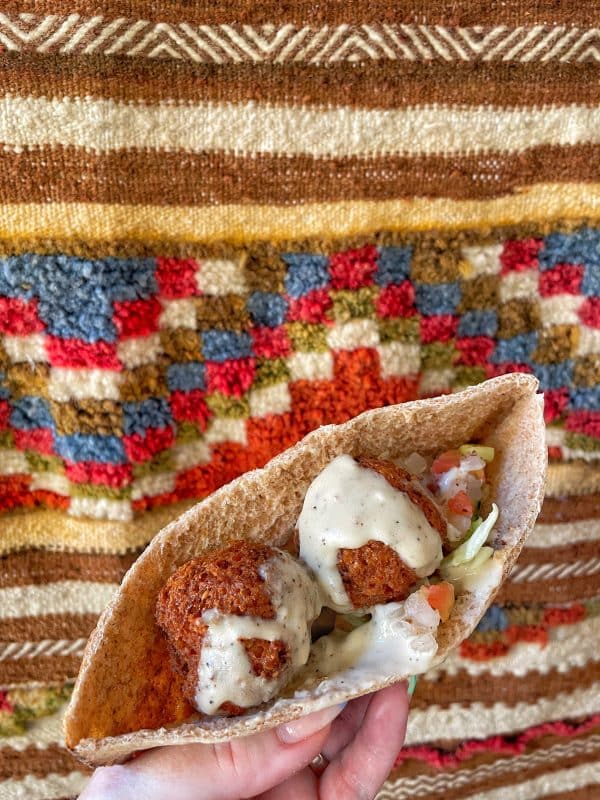 Here is the updated 2022 photo – as you can see, the falafel are smaller this year. Everything else is the same, they are still delicious, just smaller.

These dips were delicious. Only $5 so a fun option to go with your falafel. The red one is an eggplant-tomato based dip, and the green is cilantro based, along with hummus. I wish the pita were toasted but they were unable to do that due to cross-contamination with the oven.

Belgium (Between France and Morocco)

Brazil (Between France and Morocco)

Ireland (Near the United Kingdom)

Refreshment Port (Next to Canada)

Australia (Near Port of Entry)

Shimmering Sips hosted by CORKCICLE (Near Port of Entry) 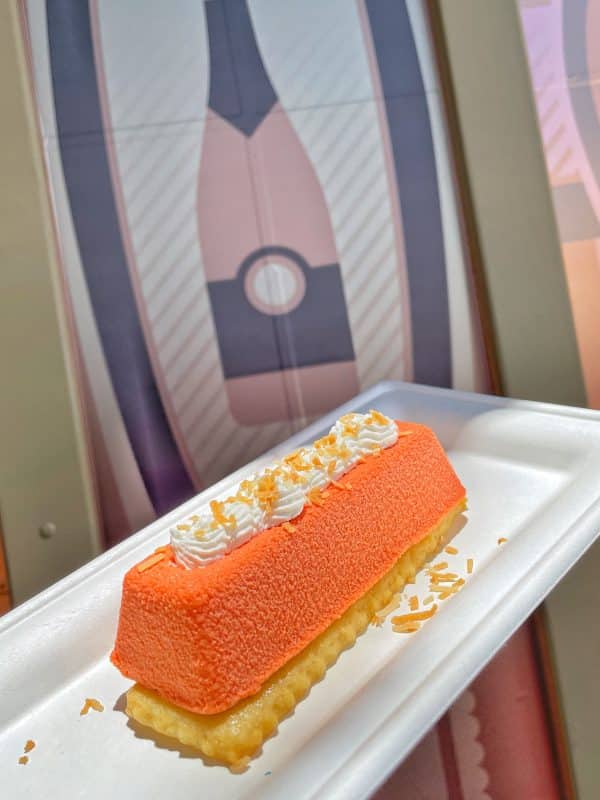 This was a surprise, because from the preview photo, I thought the whole cake was orange guava mousse. However it’s that same food spray that Disney loves to use. This time, no cochineal at least. Inside is a light guava flavored custard (had that consistency over mousse). It is very very sweet, as is the cookie it sits on. It was delicious, but keep in mind if super sweet desserts aren’t your thing. Here’s inside: 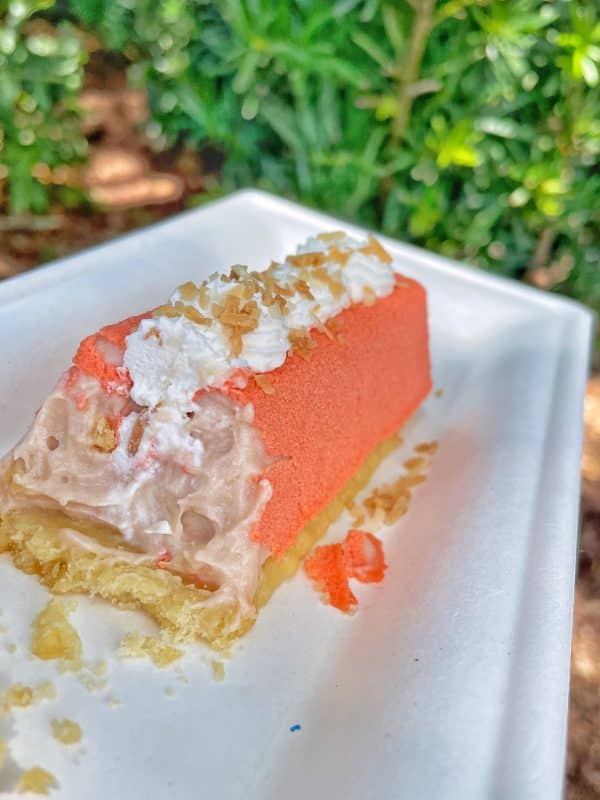 Sadly this replaces the beloved banana bread shown below: 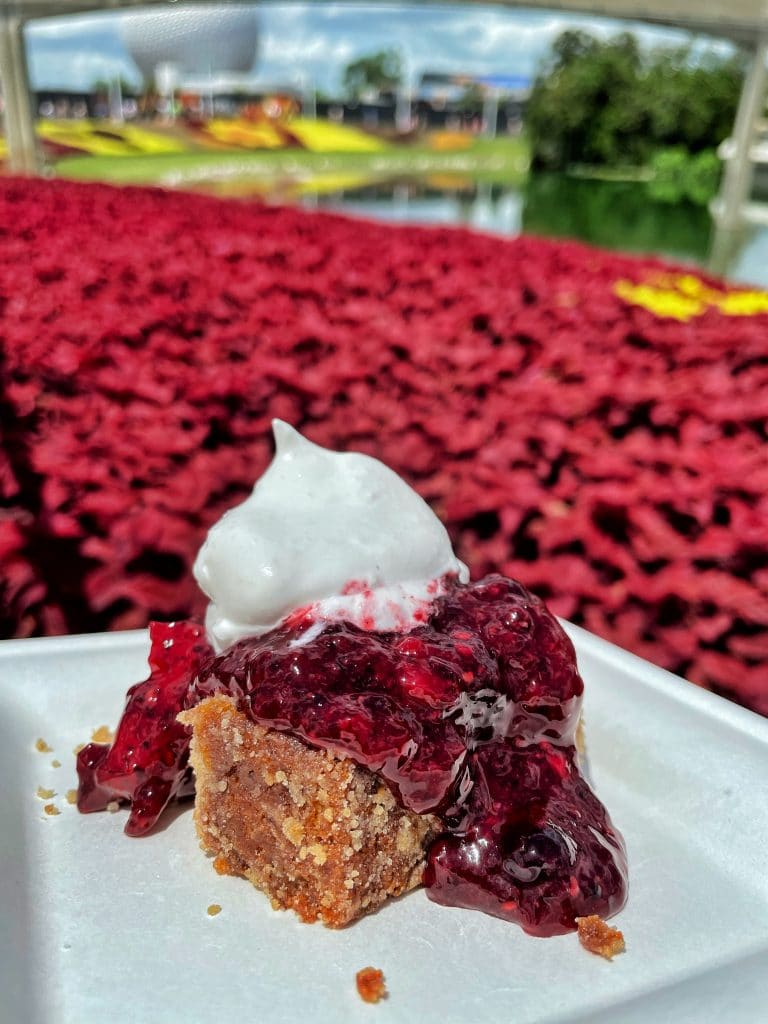 I loved this banana bread! It was moist and sweet and the edges had a delicious brown-sugary coating on it. The fruit compote was full of all different kinds of fruits like blackberries, blueberries, strawberries, and more and the coconut whipped cream was the perfect topping, not too sweet. I will miss this vegan option at the 2022 EPCOT Food & Wine Festival 🙁

(There will probably be some other craft beers in here not listed on the guide which we will check on after the festival opens so check back!)

The only option we found worth modifying was the Stone-baked Bread from Tangierine Cafe in Morocco and the Fry Flight, if you really like fries – see above. There are some options in Mexico, but in my opinion, they are not be worth modifying for the amount you need to remove and still pay full price. The option in Brazil cannot be modified.

We’re also getting a Remy Spork this festival! Available at select marketplaces – $2.50 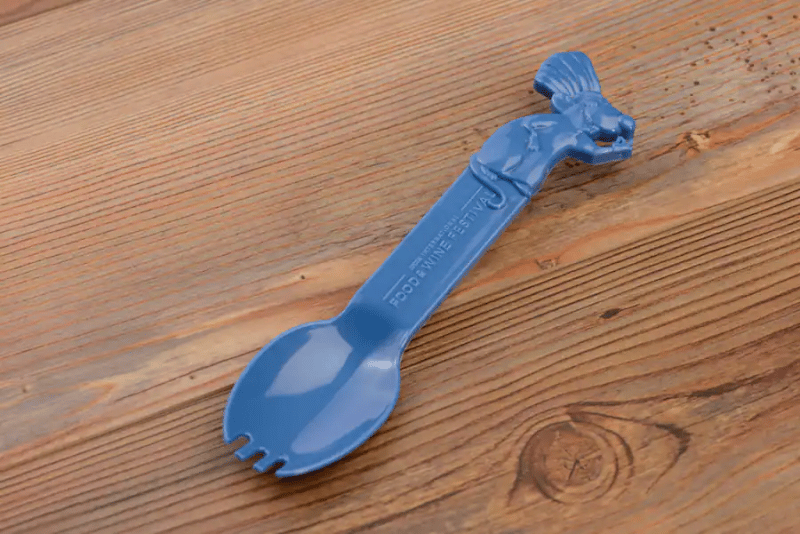 Watch our Everything Vegan at the 2022 EPCOT International Food & Wine Festival video – and be sure to subscribe to see our other video reviews:

That about covers it for the 2022 Epcot International Food and Wine Festival vegan options. We’ll update again on August 15th when the other booths open!

WANT TO REMEMBER THIS OPTION? Save the “Vegan Options at the Epcot International Food and Wine Festival” pin to your favorite Pinterest board. 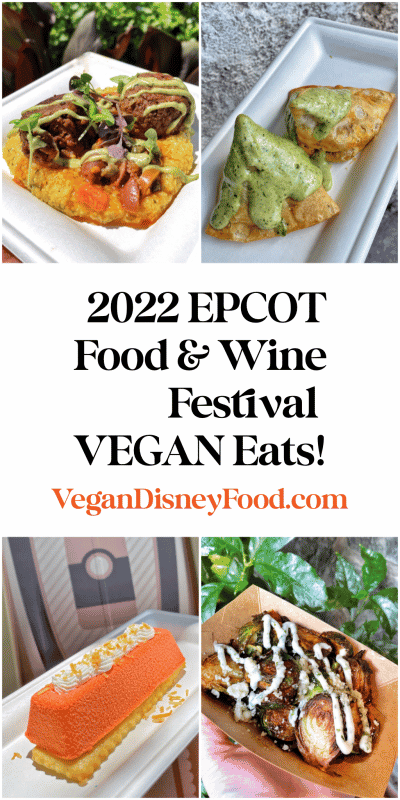 0 replies on “Vegan Options at the 2022 EPCOT Food and Wine Festival”
Love VeganDisneyFood? Support the site: