Last night some friends and I met up at Splitsville Luxury Lanes in Disney Springs to bowl a few rounds, drink a few rounds and check out all the vegan items the restaurant has to offer.

The motto at Splitsville is “Roll in and Rock Out” and if you’re looking for a high energy dining and entertainment experience this is THE place to find it. 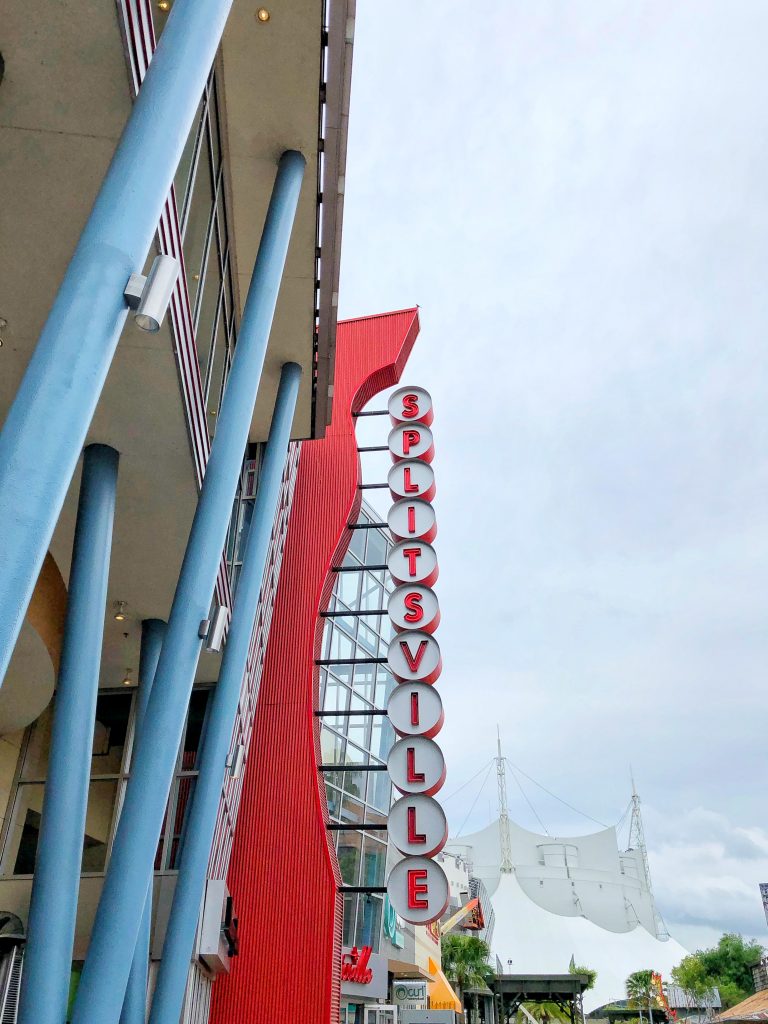 Splitsville is conveniently located in Walt Disney World’s Disney Springs dining, shopping and entertainment district. You can find it in the West Side adjacent to the AMC Movie Theater and the Orange Garage parking structure.

The Splitsville concept is unique in that it combines fine dining with live music and bowling in a retro yet modern setting. On our visit we planned to both bowl and dine. You can do just one or the other as well as do both at one time. Bowling is not a requirement to dine and dining is available without a requirement to bowl.

If you’re planning on bowling and dining, my suggestion would be to dine first and then bowl when you are finished. Bowling is priced per person and is billed by the hour not by the game. If you are dining and bowling at the same time, you will likely not be able to get as many games in as if you were just bowling. 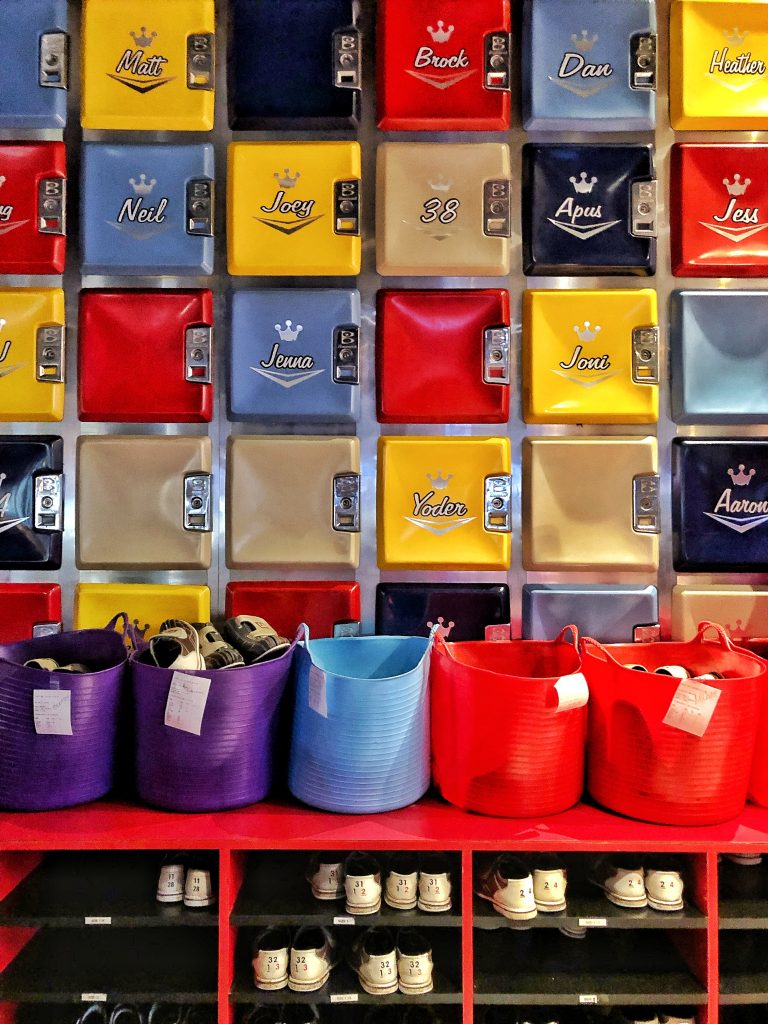 We checked in at the bowling counter and received a pager with our info including names, bowling screen order and shoe sizes. We were then seated for dinner and told to come back to the bowling counter after finishing our meal and that we would be put on the roster for the next available lane.

Splitsville is a massive building with high ceilings spanning two stories. The restaurant has both inside and outside seating with multiple bars and seating options including booths and tables. There are also tables at each lane for guests who want to eat and bowl at the same time. 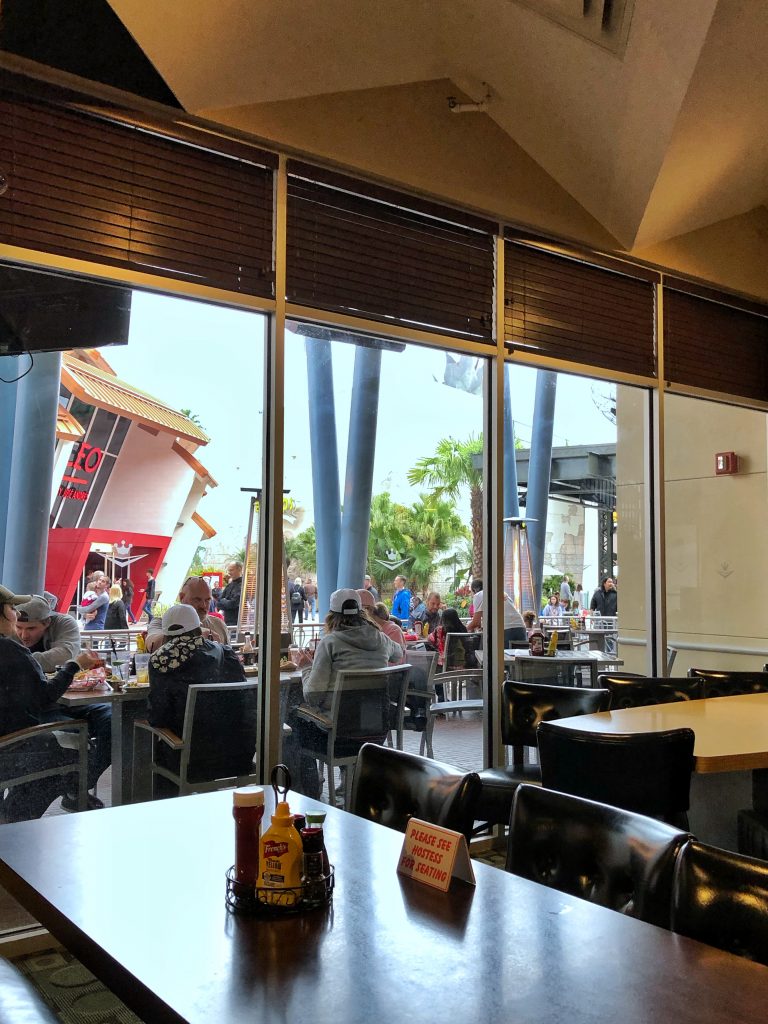 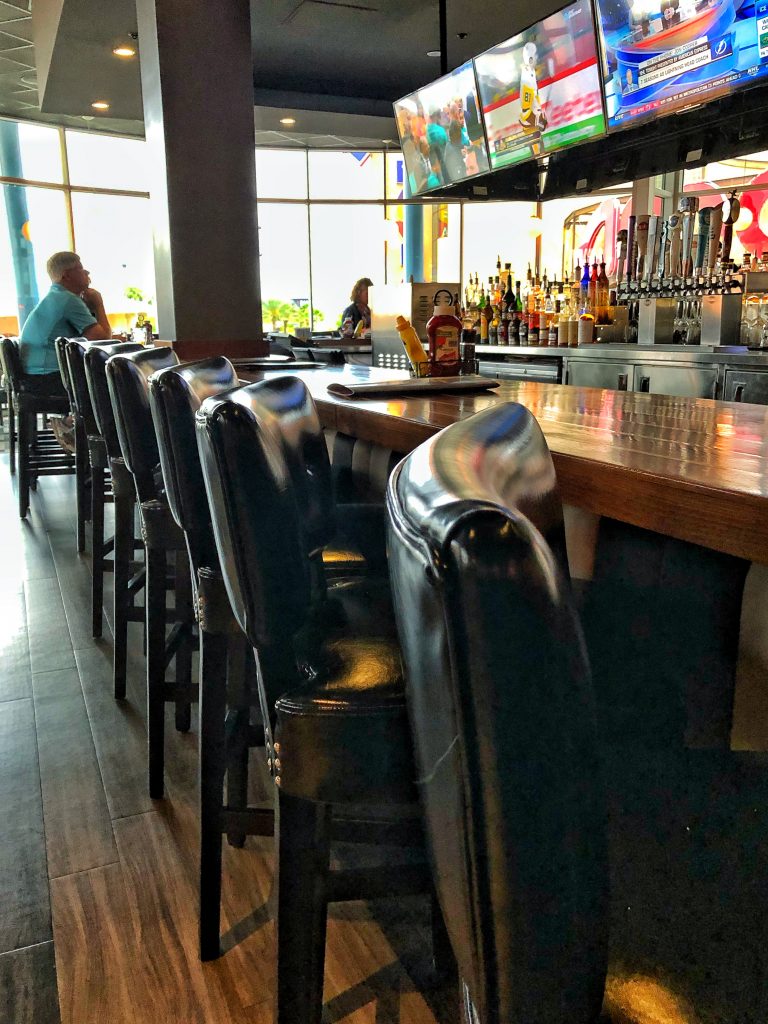 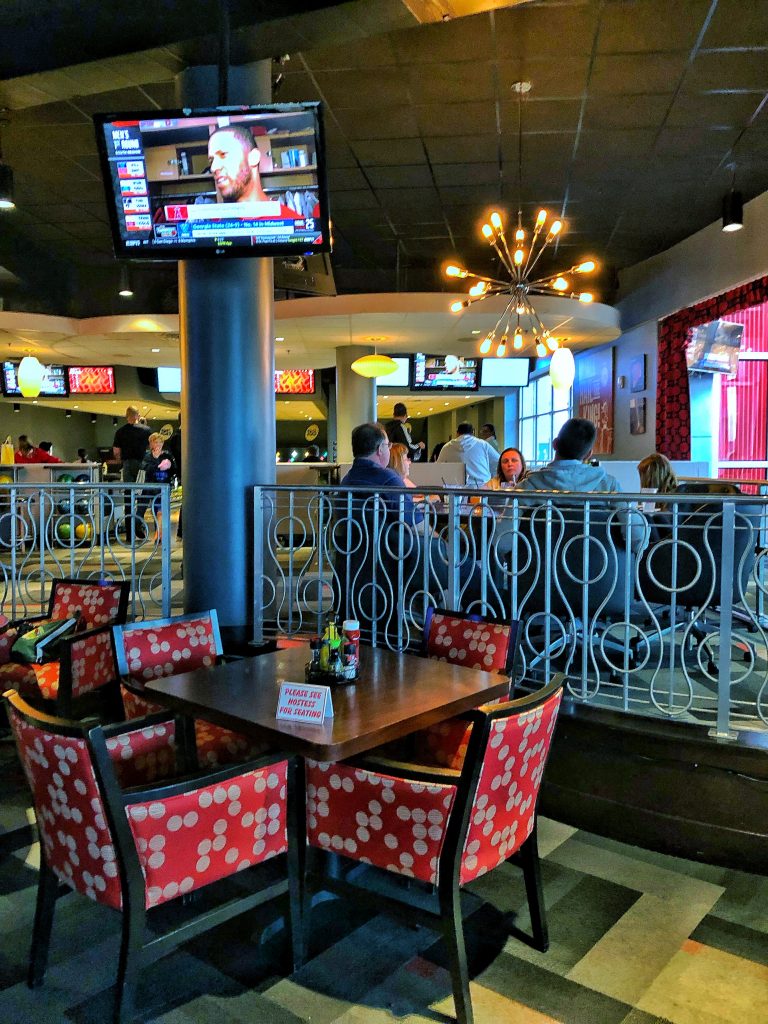 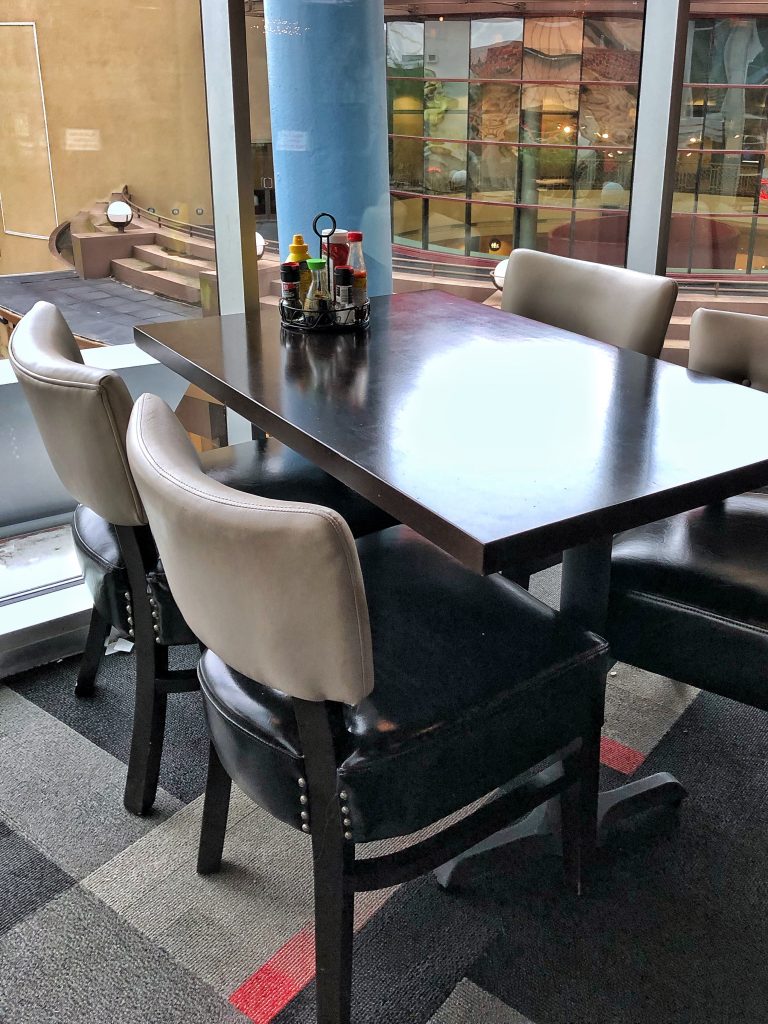 Splitsville has a nice selection of both draft and bottled beer as well as frozen signature cocktails and classic cocktails. The restaurant has done away with their schooners of beer and replaced them with 19 ounce ($10) Jumbo Steins. 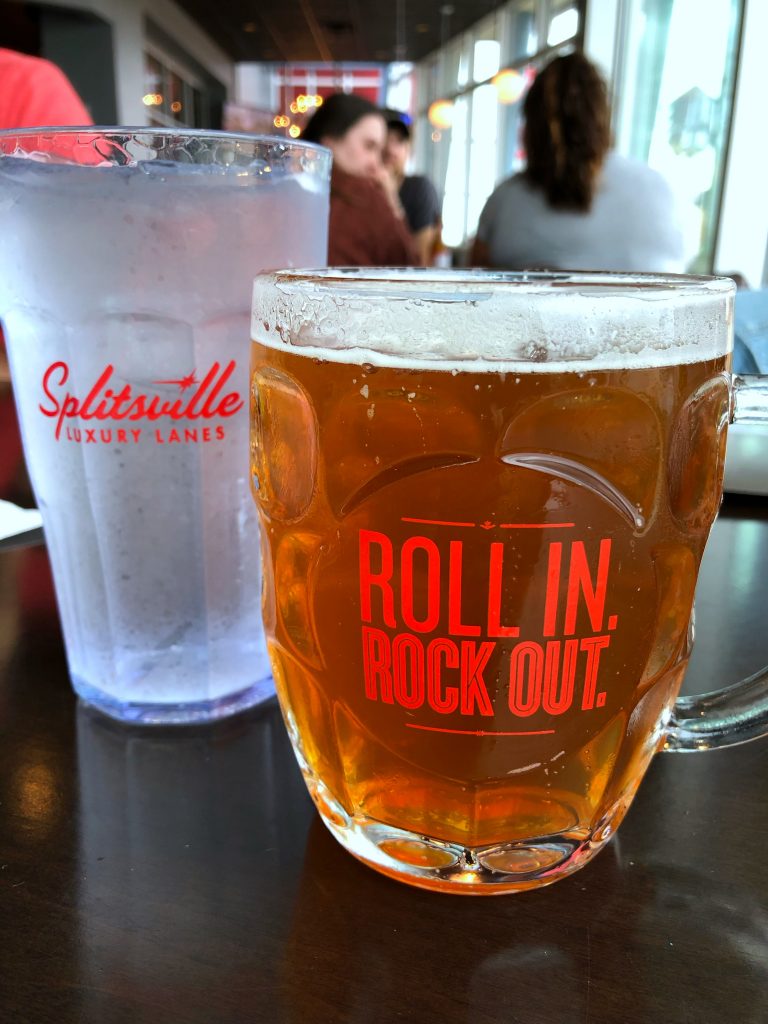 I opted for their Cucumber Cooler ($13) which is made with Tito’ Handmade Vodka, freshly squeezed lime, simple syrup, crisp cucumber slices and a rosemary sprig. I swapped out the Tito’s for Hendrick’s Gin. 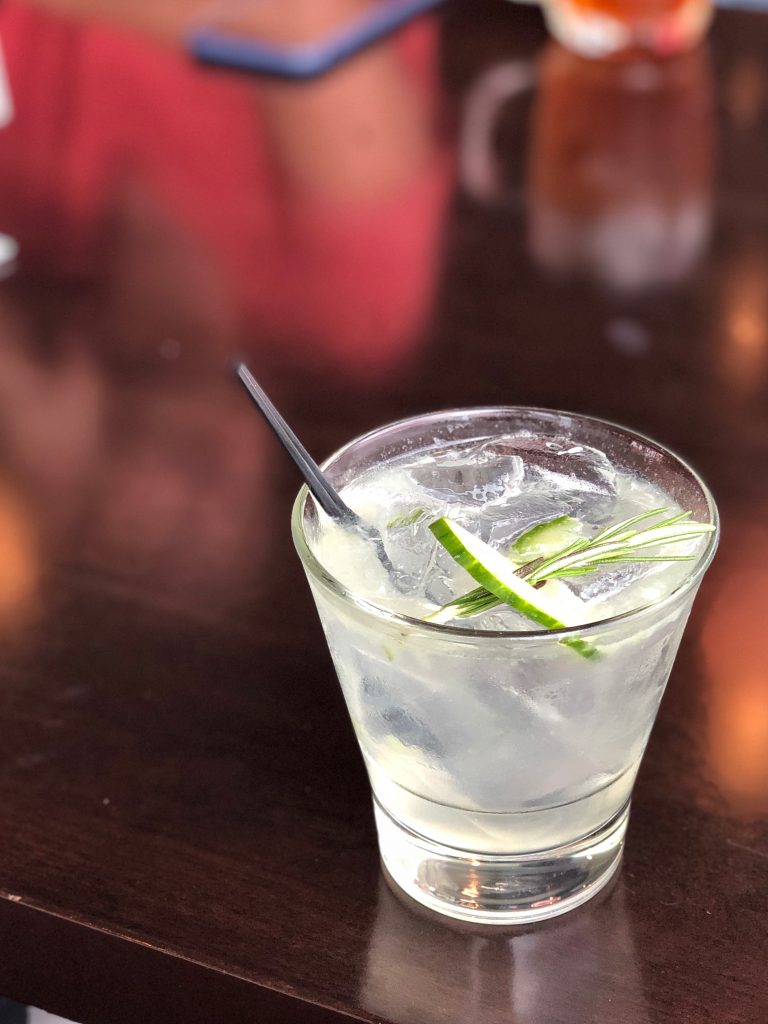 For starters we found vegan items on both the “appetizer” and “sushi” portions of the menu. 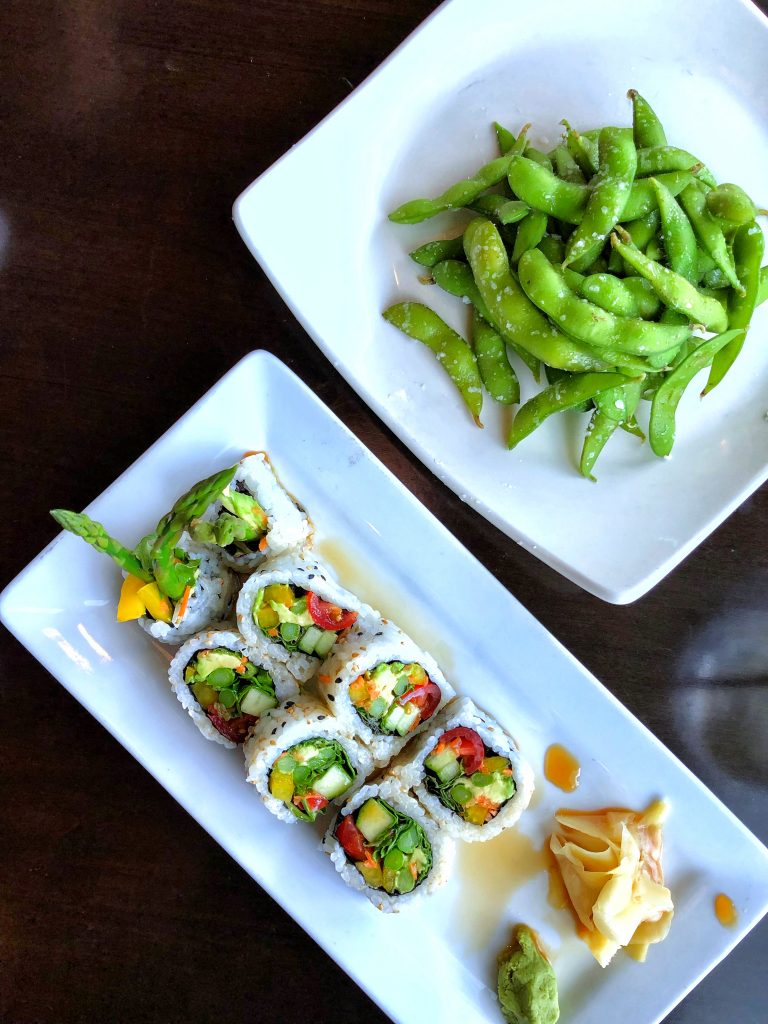 This is the Edamame ($8) which is steamed and tossed in kosher salt. 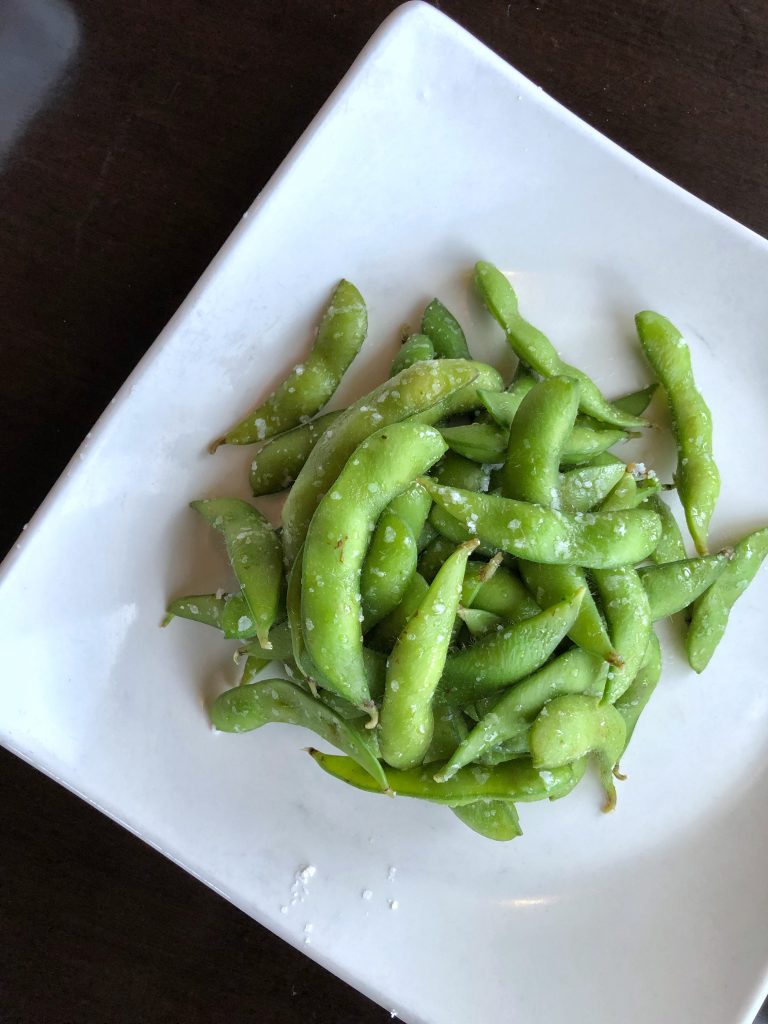 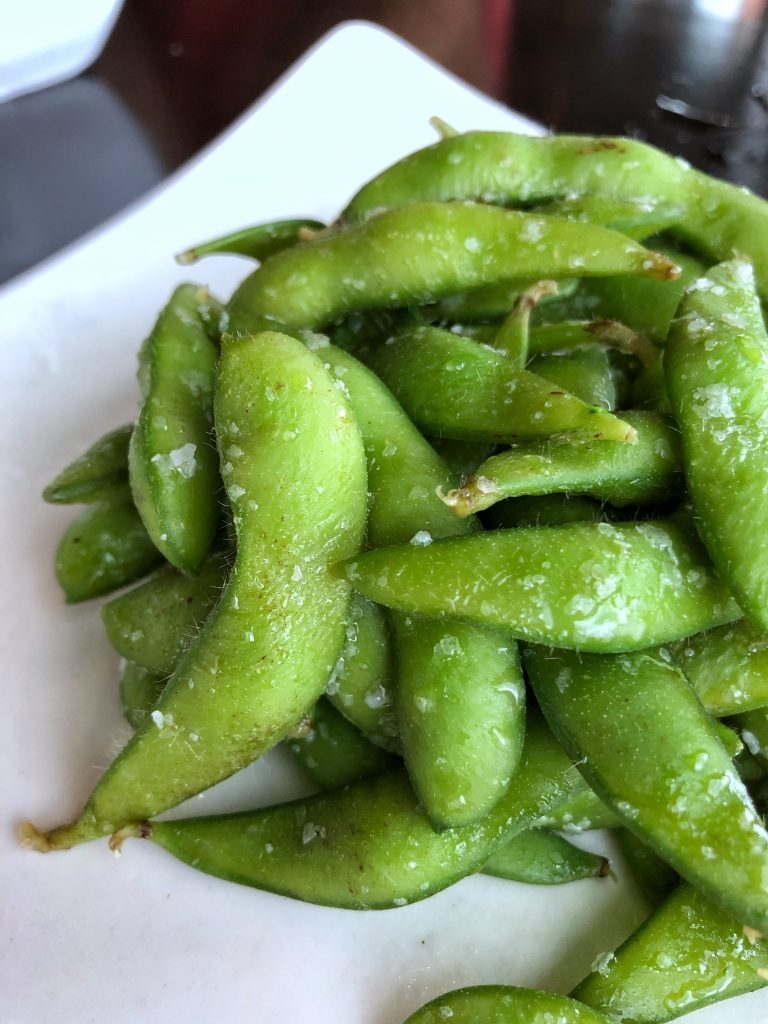 The table was blown away with this roll and I’m definitely ordering two on my next visit and making a meal out of it. 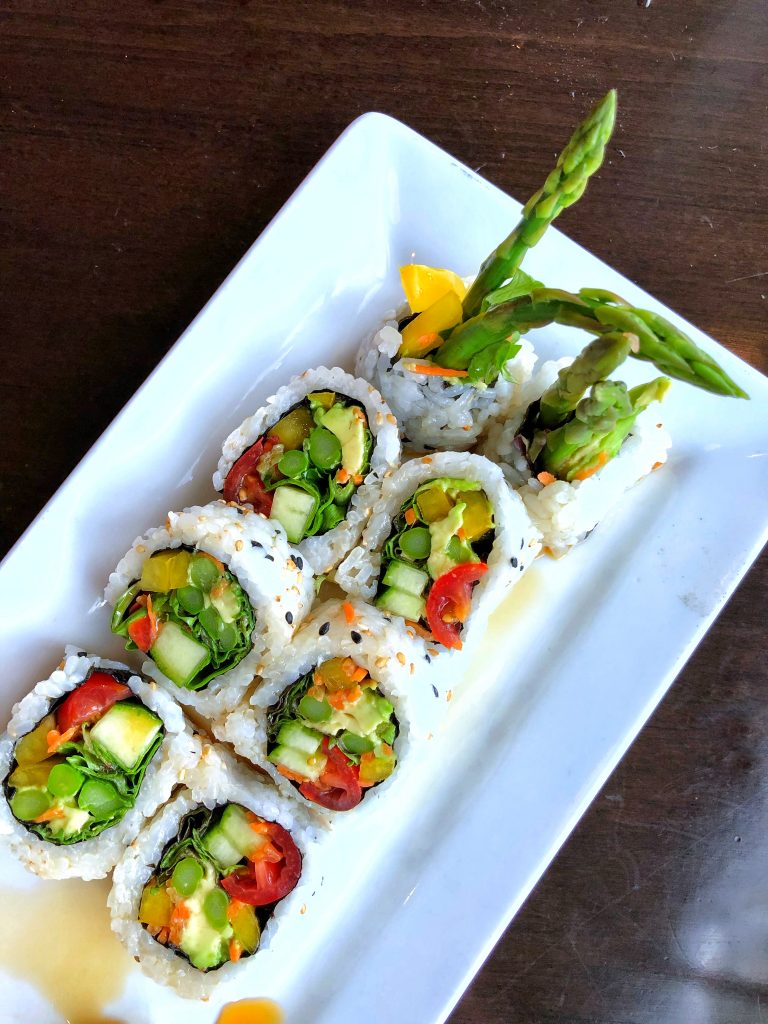 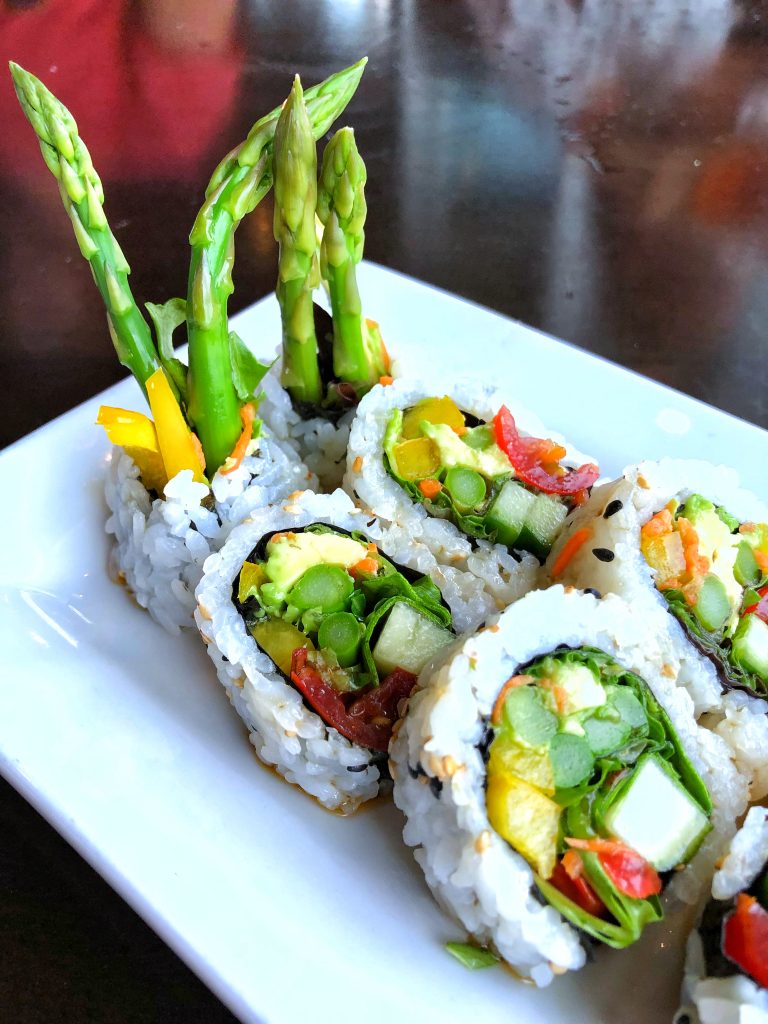 There was one item on the “entrees” portion of the menu that could be modified vegan and that was the Spicy Veggie Bowl ($18) filled with broccoli, kale and crisp mixed veggies served over sushi rice and topped with avocado and green onions. The veg is supposed to be stir-fried with a spicy kimchee tataki sauce but we were told the sauce wasn’t vegan friendly which makes this dish the Not-So-Spicy Veggie Bowl.

If you’re looking for healthy option, here it is. Ask for sriracha or soy sauce to jazz it up as its pretty plain on its own. 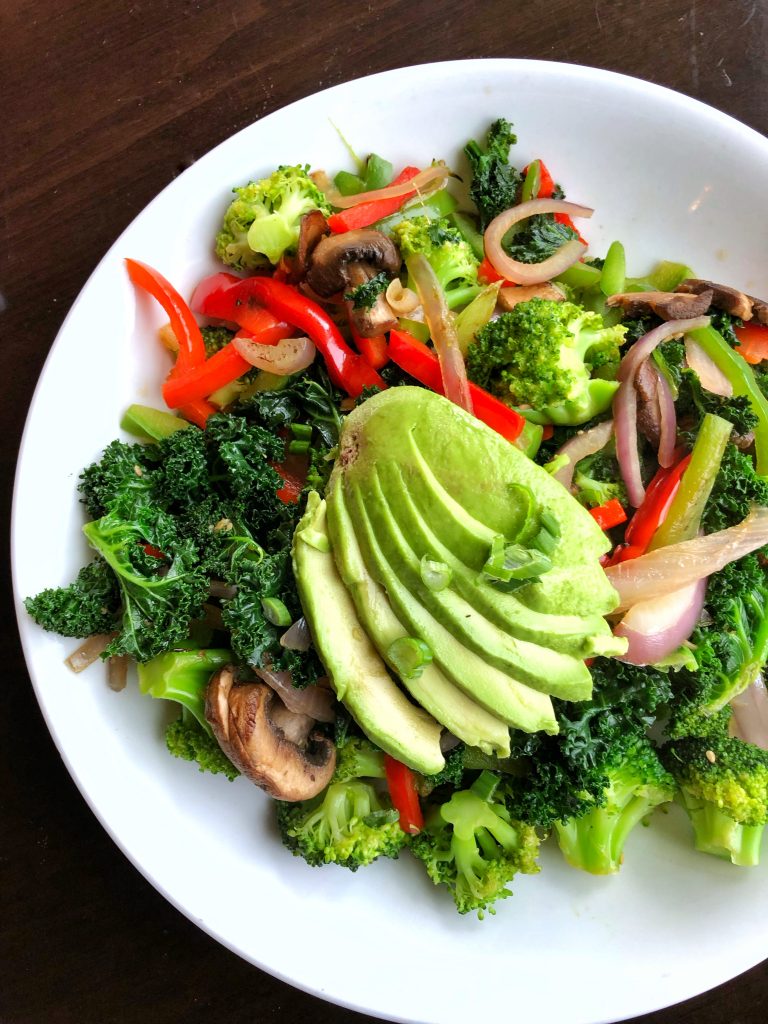 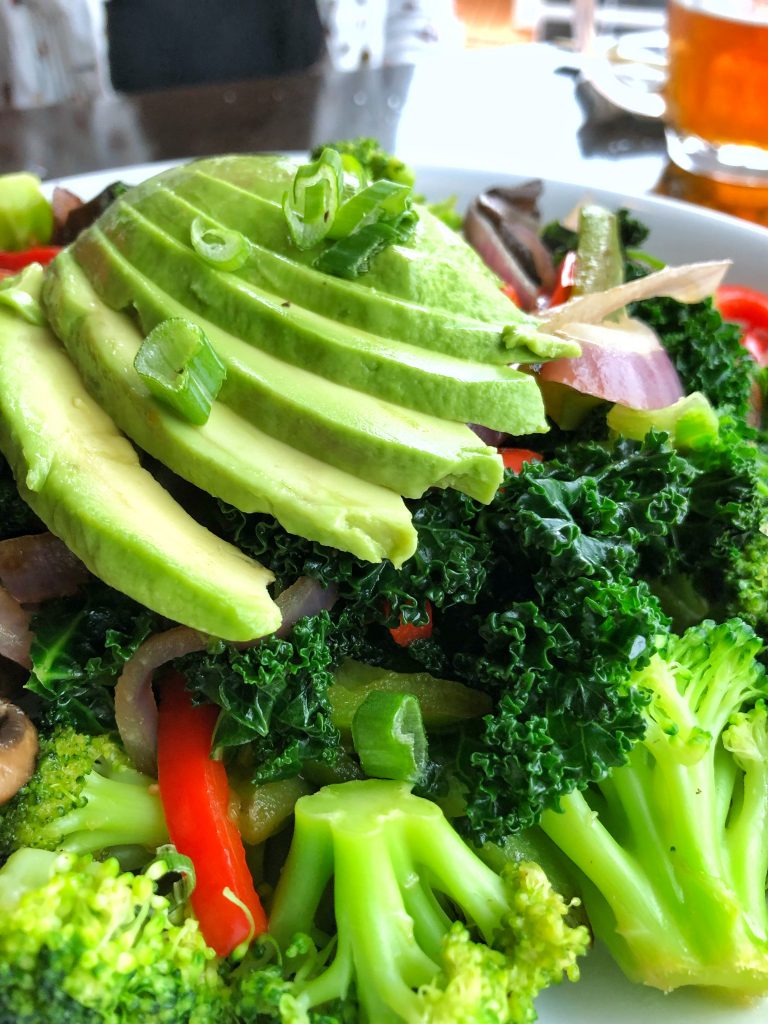 I inquired about the pizza here hoping I could order a veggie pie sans cheese but was told their one and only crust option contains honey.

The real MVP is on the “Handhelds” portion of the menu.

This is the modified Impossible Burger ($20) Its a plant-based patty topped with lettuce, tomato, onion and pickle. You’ll need to omit the cheese and awesome sauce and ask that it be served on unbuttered Texas Toast as the buns here are not vegan friendly. I added ketchup and mustard after delivery to the table. Crinkle cut fries come on the side. 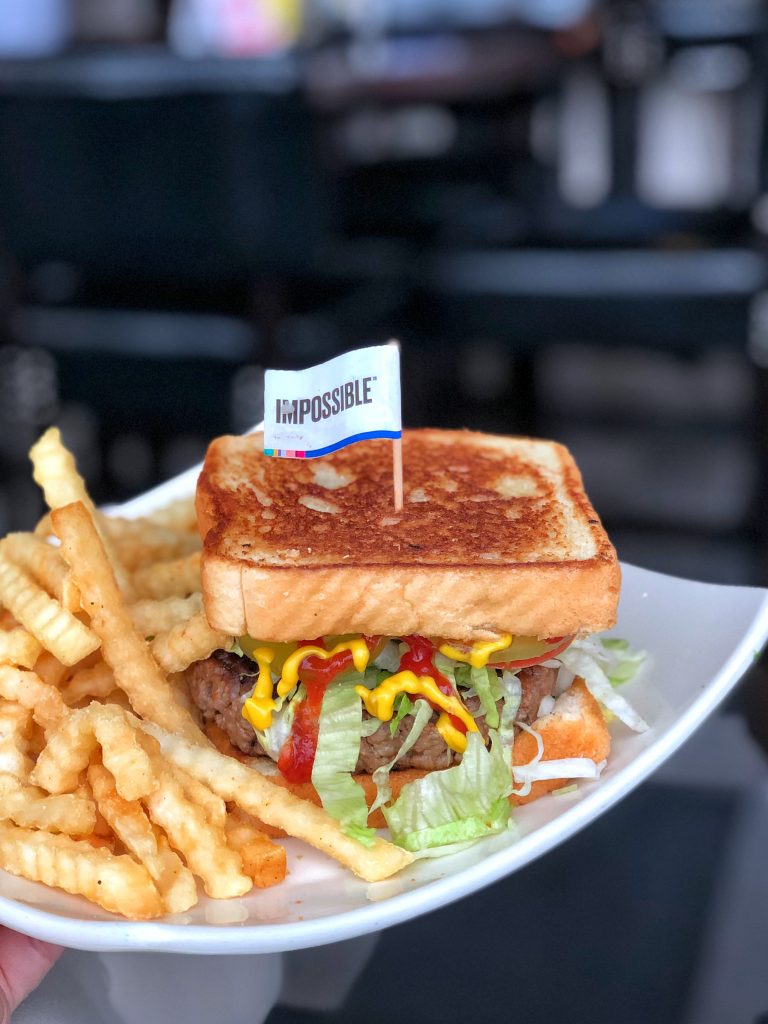 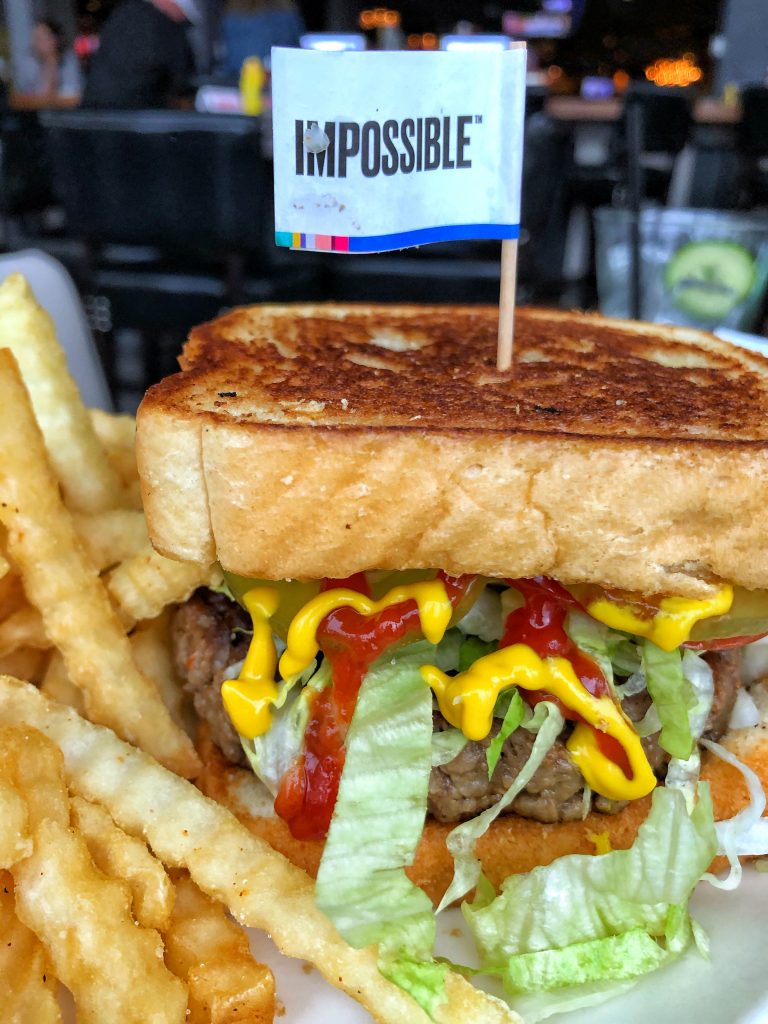 Side note: Splitsville used to have Impossible Sliders on their appetizer menu. These are no longer available now that a full sized burger has been added to the menu.

Once we had stuffed our faces we headed back downstairs to check in for bowling and after a minimal wait were given a lane. There were three of us which gave us one hour and fifteen minutes to bowl. We were able to complete three games in that time frame. 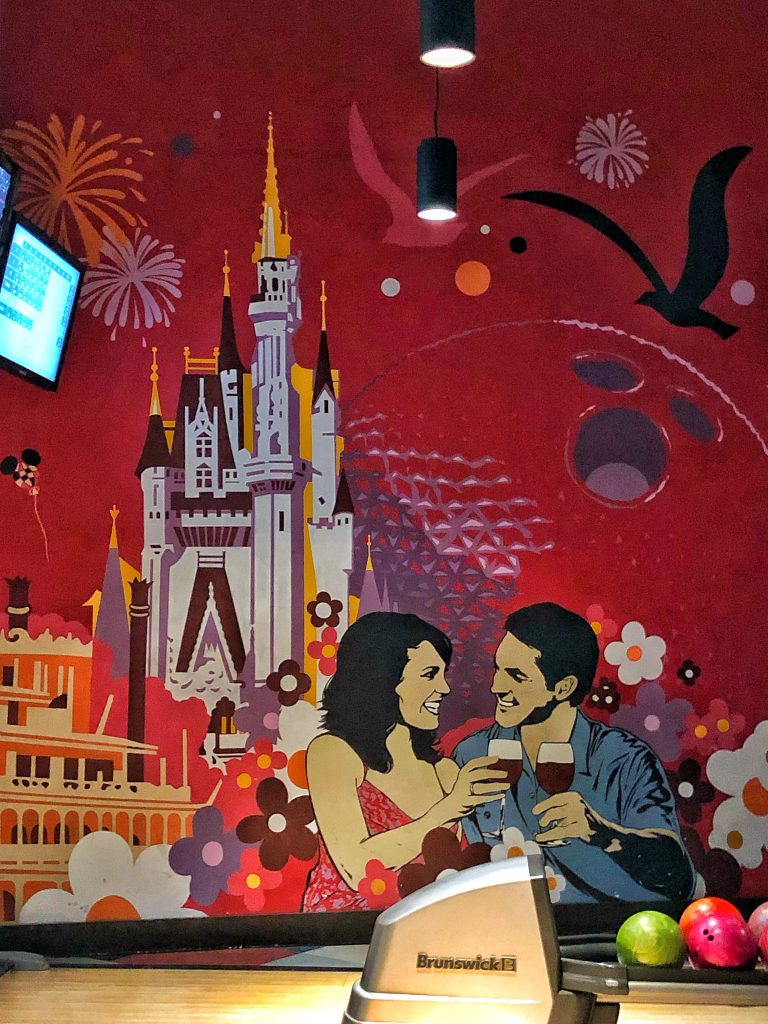 I absolutely love Splitsville! Especially when looking for a fun night out with friends. This is also a lovely “rainy day” activity for those unexpected weather days at Walt Disney World.

Interested in bowling only? Check here for the Pricing Structure at Splitsville Luxury Lanes

Special thanks to Splitsville for hosting me and my guests for the purpose of this review. As always all opinions  are my own.

WANT TO REMEMBER THIS OPTION? Save the “Vegan Disney Food Review: Splitsville in Disney Springs at Walt Disney World” pin to your favorite Pinterest board. 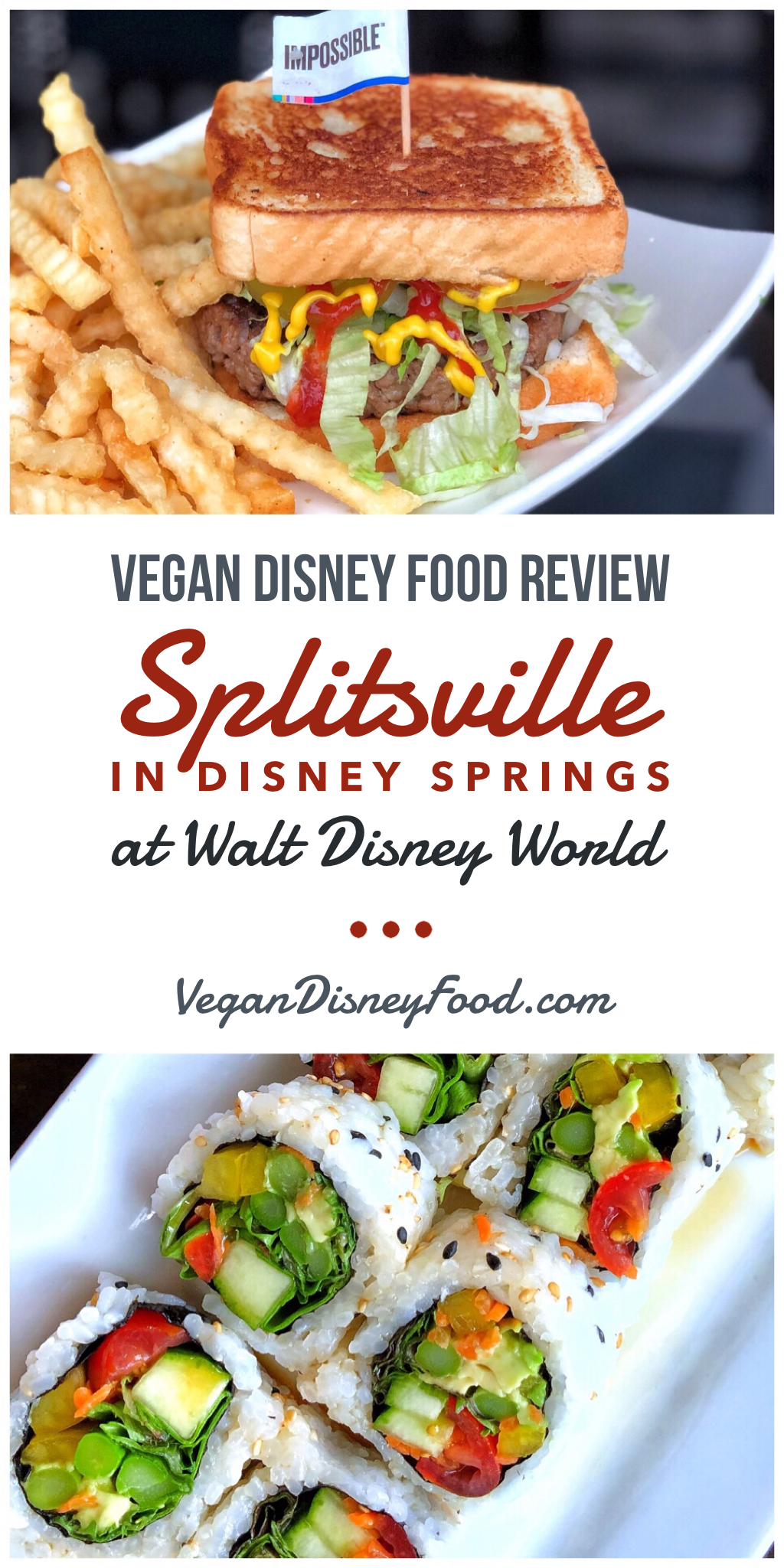