You can grab some quick service vegan grub right out of Andy’s vintage lunchbox inside Toy Story Land at Woody’s Lunch Box in Disney’s Hollywood Studios.

Guests are magically miniaturized  when entering this brand new “backyard” land where toys are strewn about in typical kid fashion. 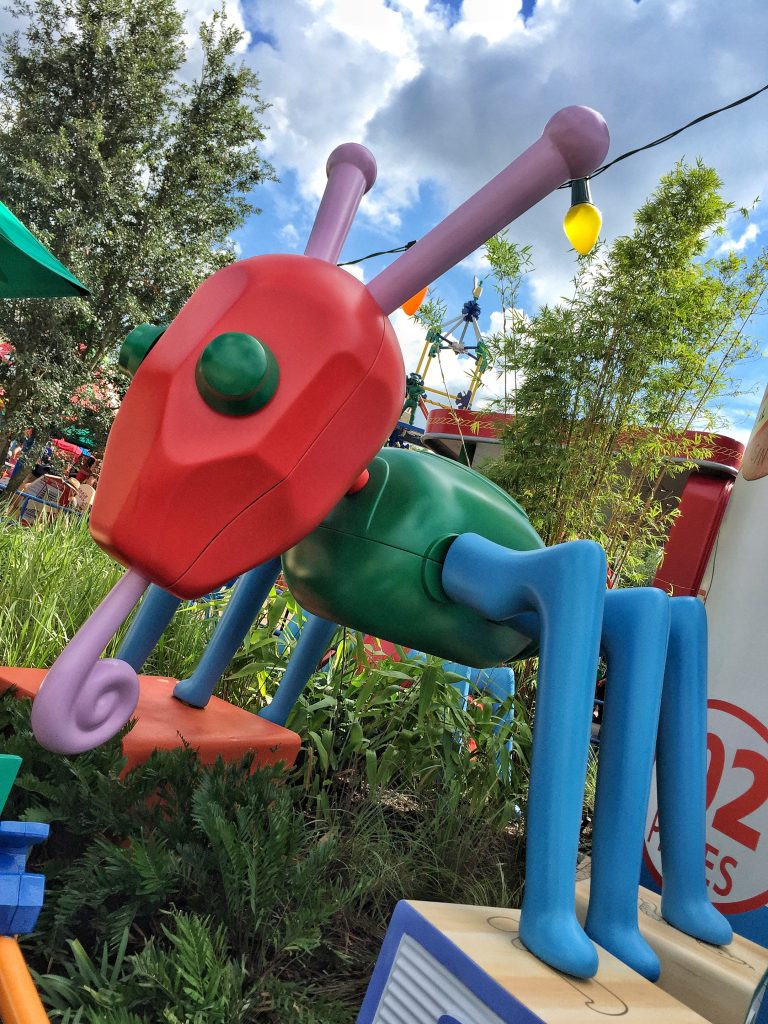 Much like the size of its guests, Toy Story Land has a very small footprint compared to other sections of the park. Makes Andy’s footprint look rather large wouldn’t you say? 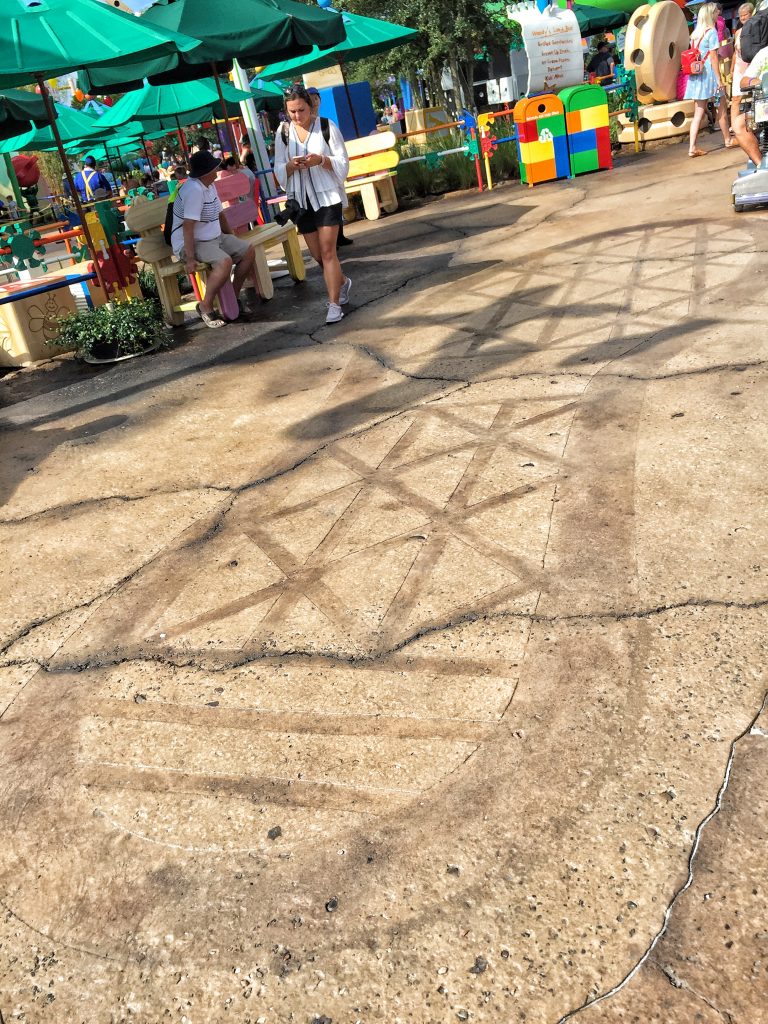 Woody’s lunchbox is slinging retro lunch favorites from it’s shaded quick service window which is a Woody inspired metal lunchbox tipped on its side and propped open with a matching thermos. 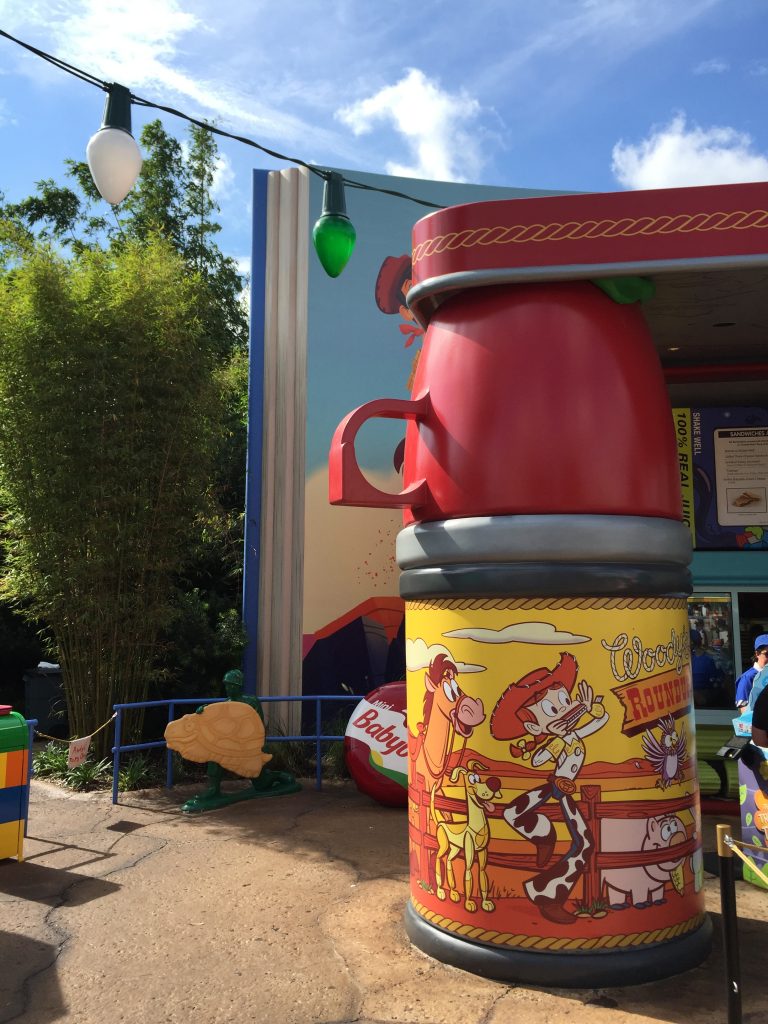 Signage depicting the menu is a tattered piece of lined notebook paper, with a hand written note displayed on a tinker toy stick. 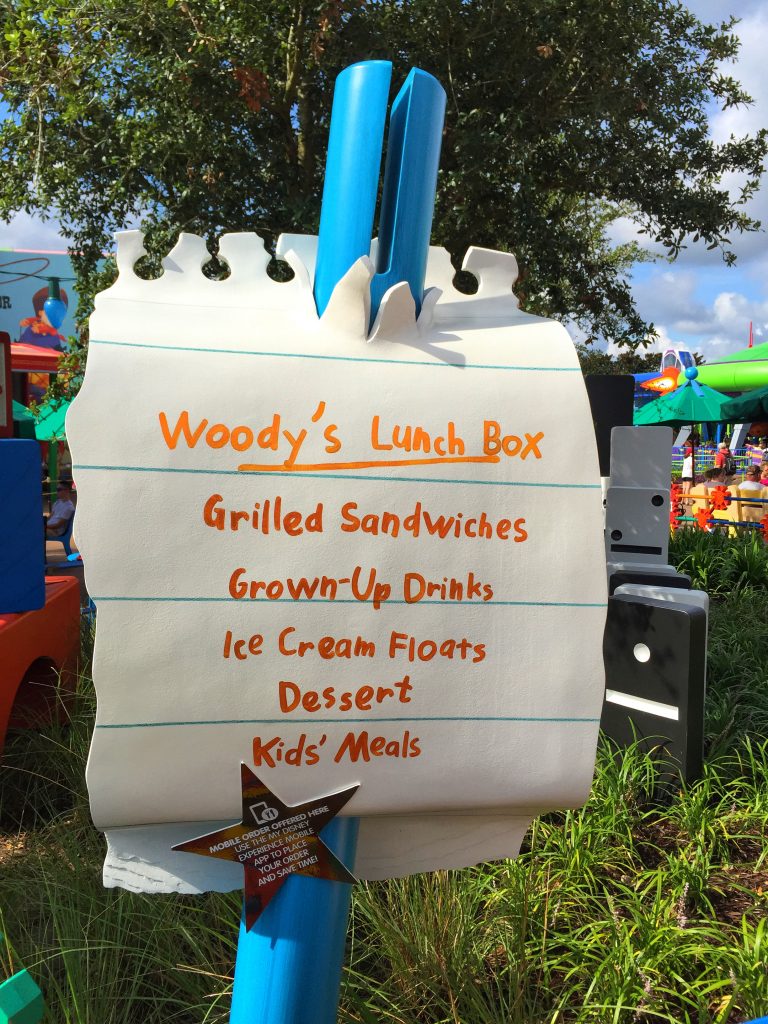 I wanted to try “all the things” on my lunch visit. I ended up ordering three items, the “off menu” Vegan Grilled Cheese Sandwich, Modified Totchos and a Grown-Up’s Lemonade. 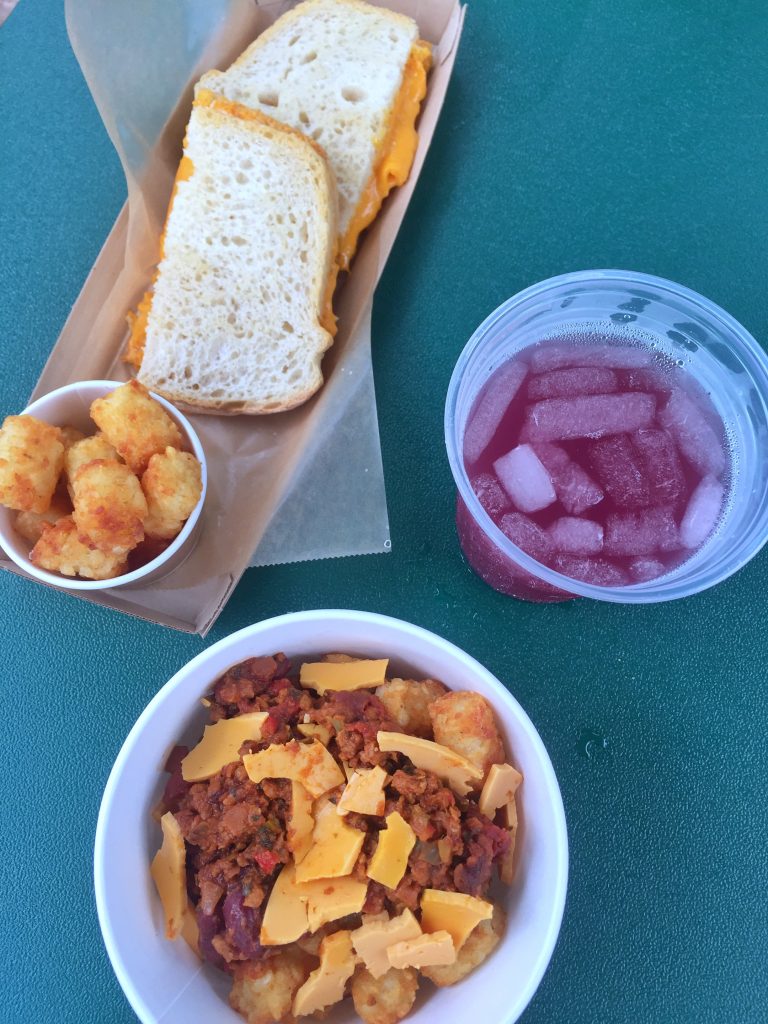 The Modified Totchos weren’t much too look at, and from the many photos I’ve seen on social media have been pretty inconsistent. Mine had a slice of Daiya cheddar cheese crumbled on top. I’ve seen other photos topped with vegan shreds, also unmelted.

Normally these are served with a base of baked tater tots and topped with Fritos, vegan chili, vegan cheese and scallions. They neglected to put the scallions and Fritos on mine which was kind of a bummer since both missing items are vegan and would have lended an extra layer of color and texture. The nice thing about this offering is that it is a pretty large serving size and despite the look of the cheese on top and omission of greens and corn chips I enjoyed my portion of Totchos very much.

Here’s a look at the vegan Totchos on a return visit with the actual vegan cheese shreds. I got the greens this time but still no Fritos. 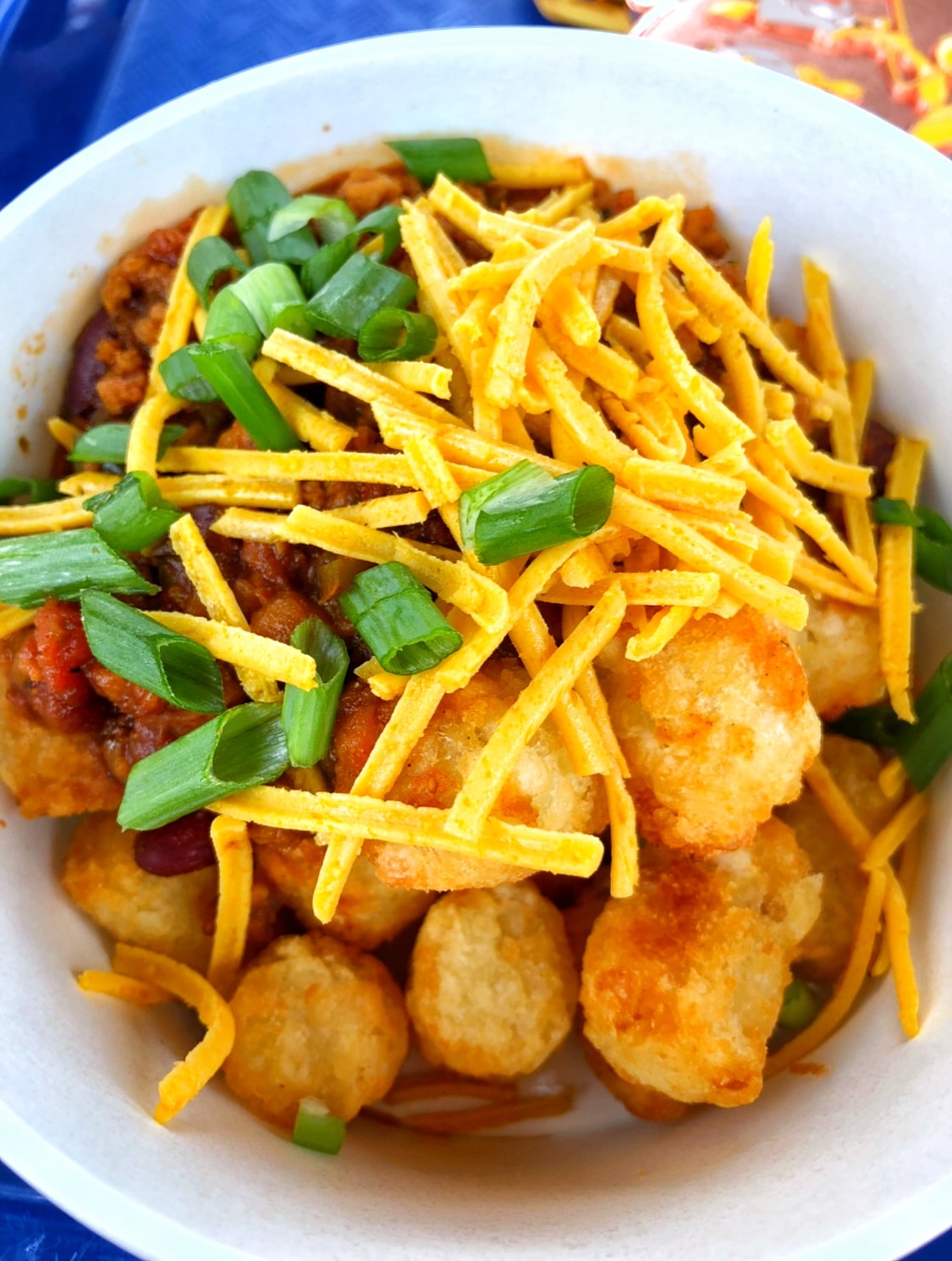 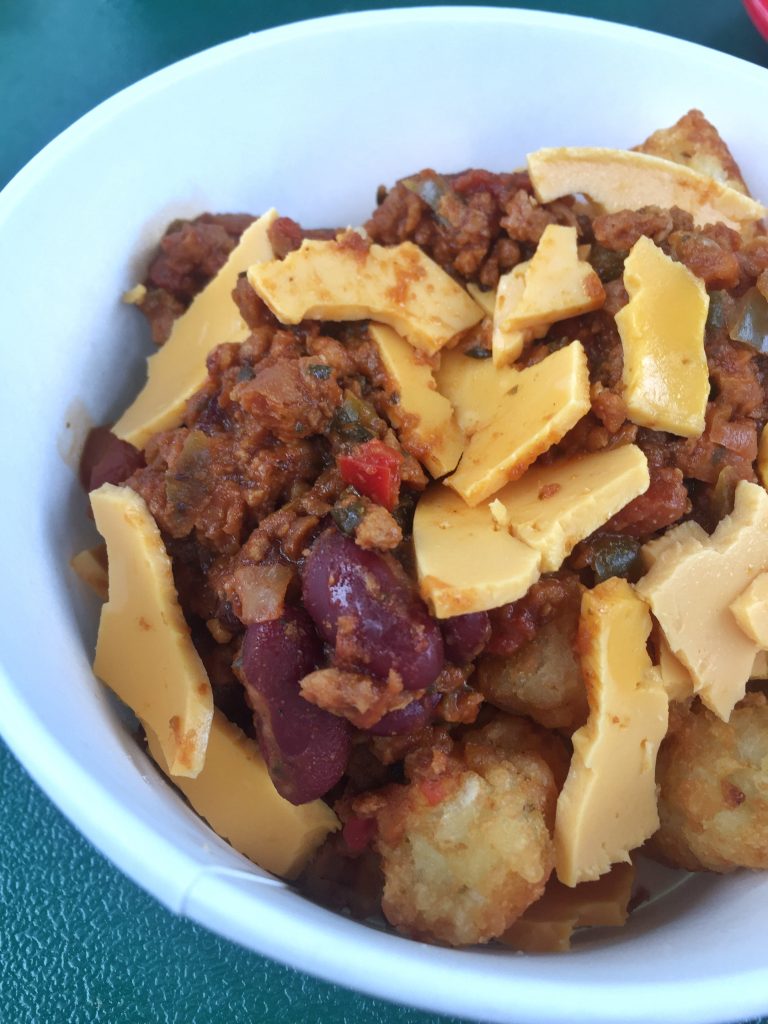 The next food item I indulged in was an “off menu” Vegan Grilled Cheese Sandwich with a side of Potato Barrels.

I had heard mixed reviews on the sandwich before ordering it. Some guests had been served what basically amounted to non-melted cheese toast. My portion was delightfully crisp and super melty on the inside. Also, I am pretty much a taster tot fiend and was happy to have a second helping.

My girlfriend and I split the sandwich. That’s a lotta cheese. 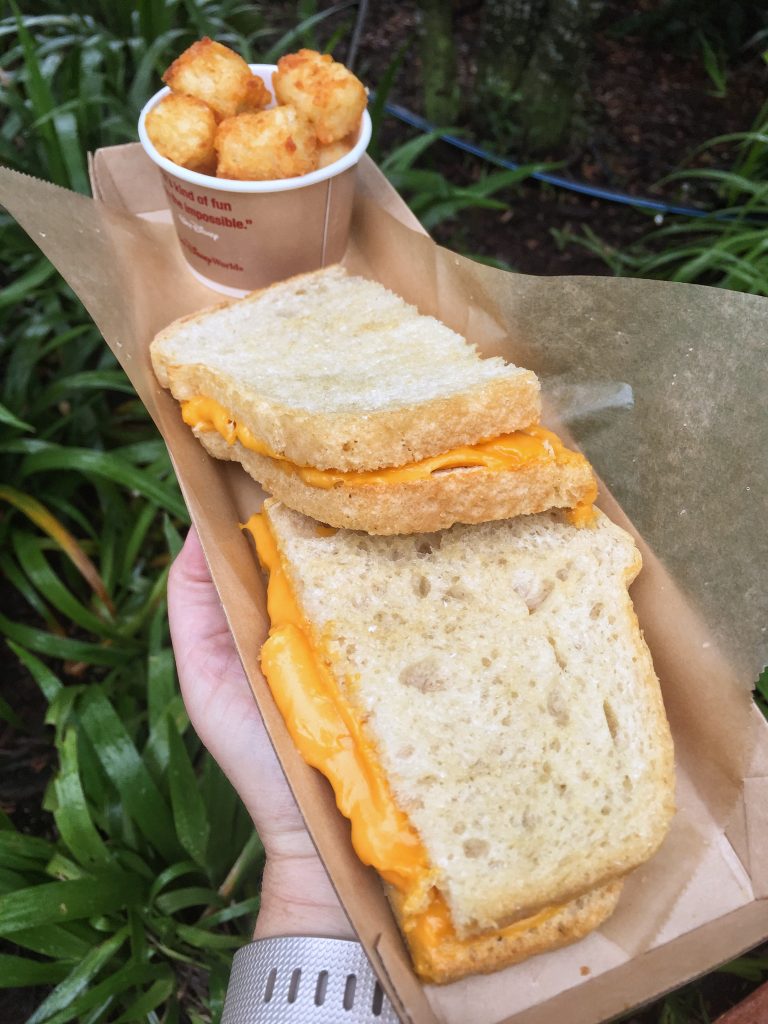 I washed everything down with one of the “fully leaded” beverages available to those guests 21 and older.

The Grown-Up’s Lemonade is a blend of Three Olives Cherry Vodka, Odwalla all natural lemonade and black cherry purée. This one was way too sweet for me folks, but if sweet is your thing, give it a go. 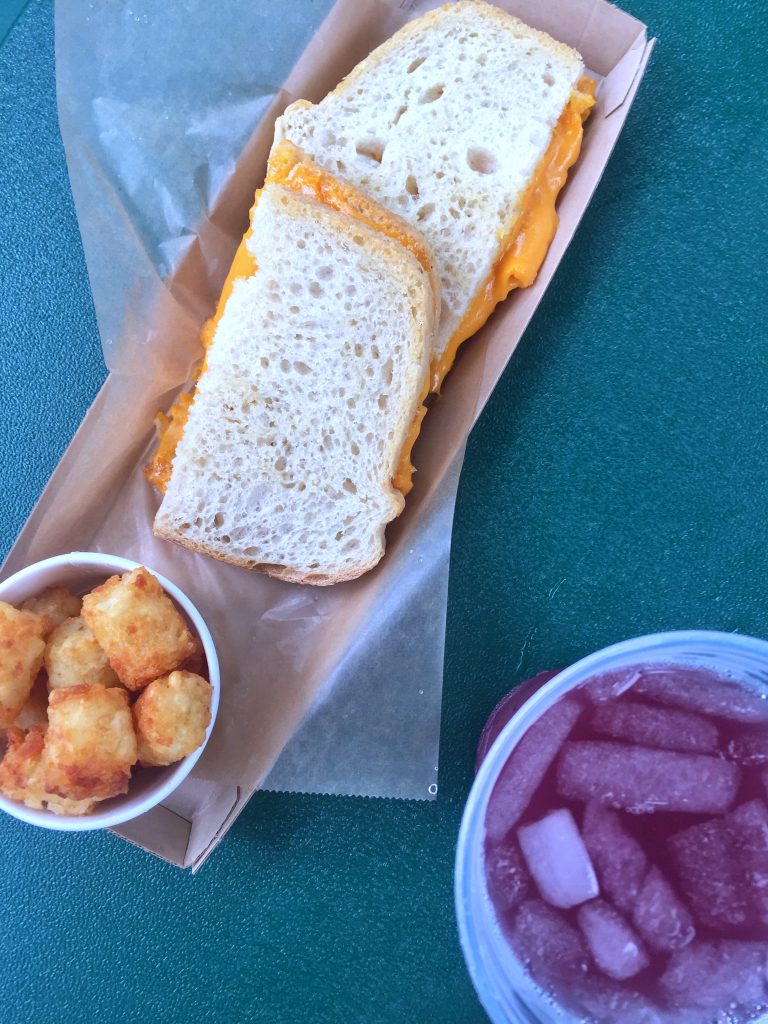 After satisfying our rumbly tummies it was time to take a whirl on the Alien Swirling Saucers. 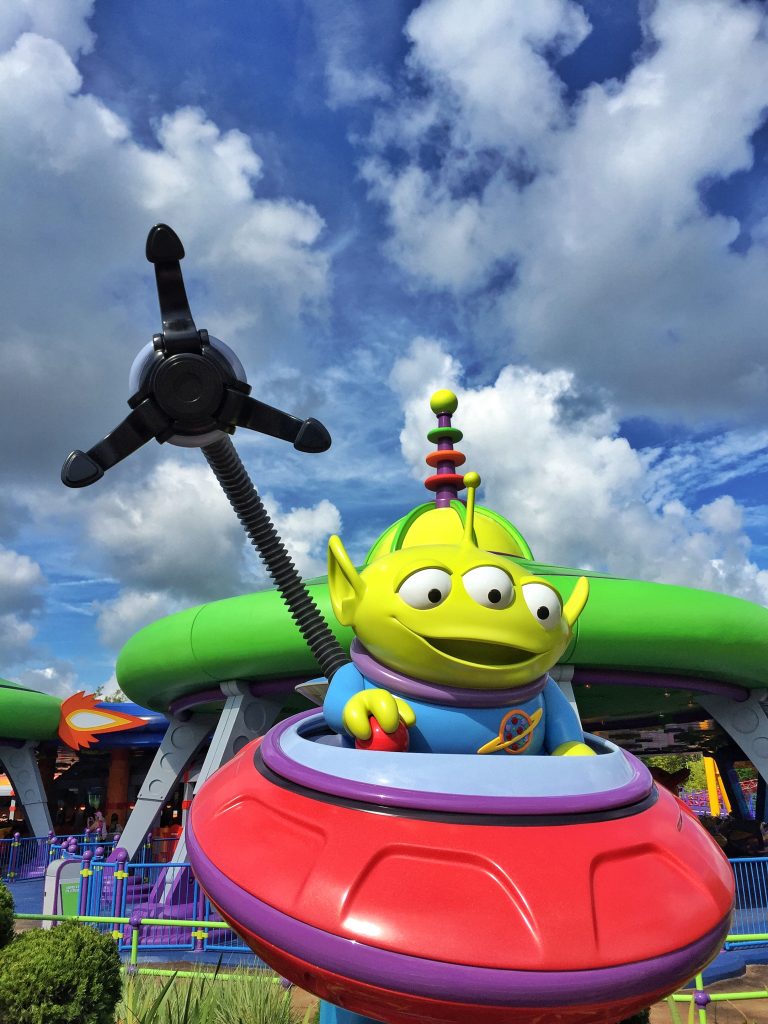 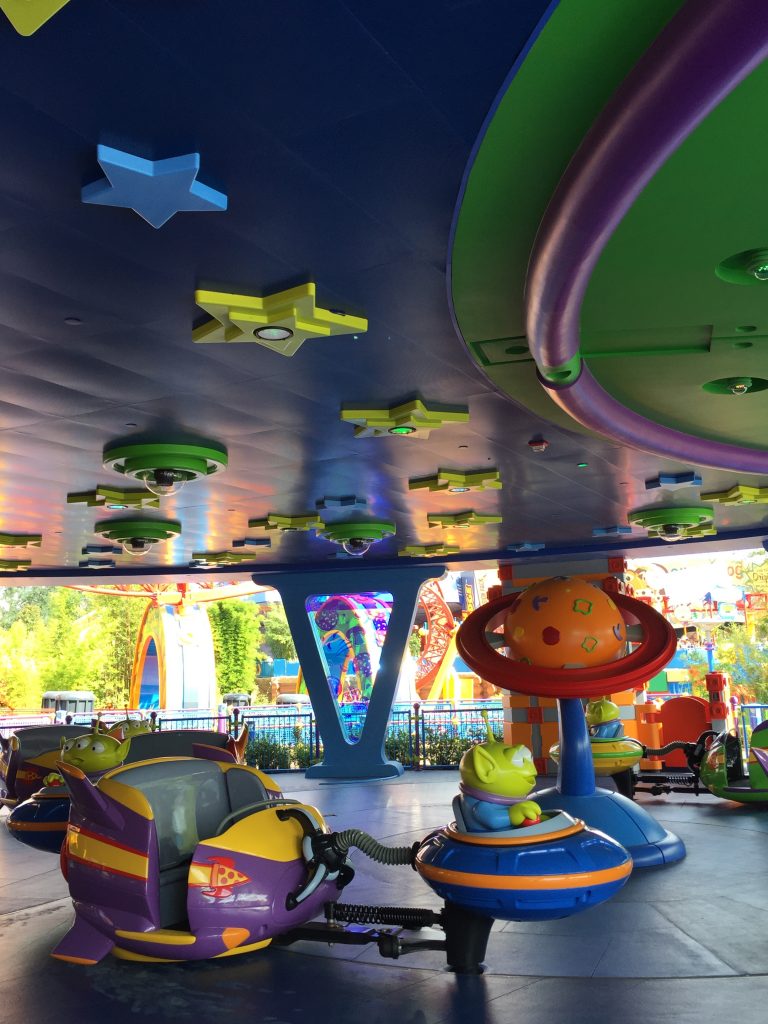 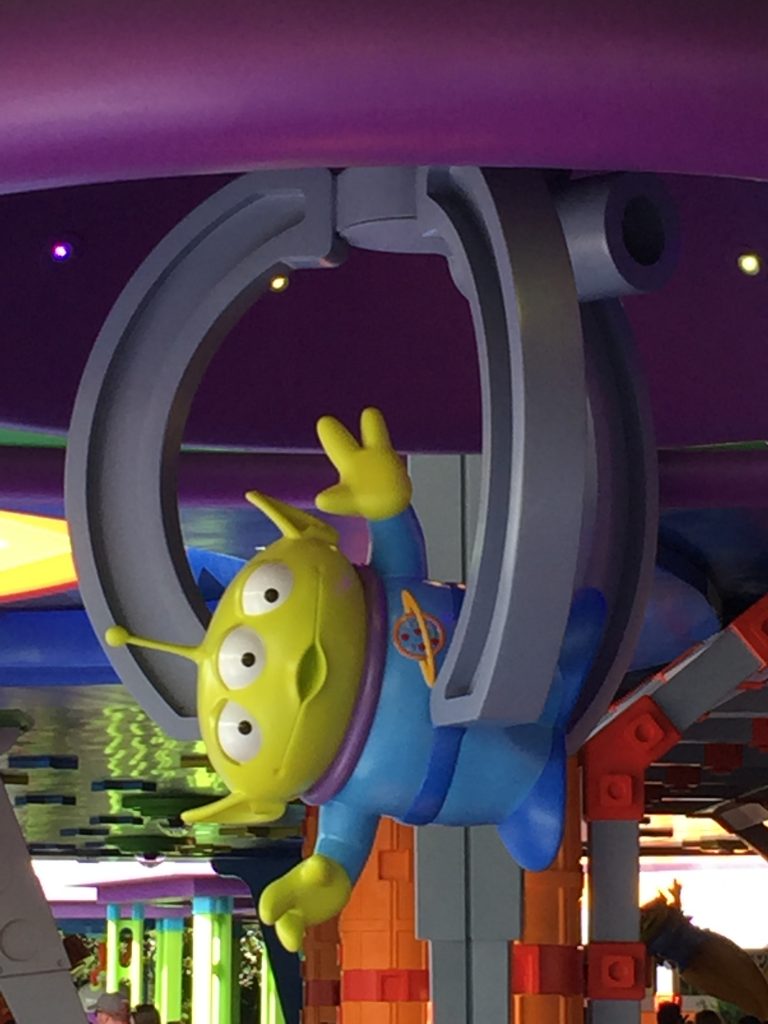 I thought this was going to be similar to the Tea Cups in the Magic Kingdom but it ended up being a bit gentler than that.

Keep your eyes peeled for the Green Army Men drum corps when touring the area. 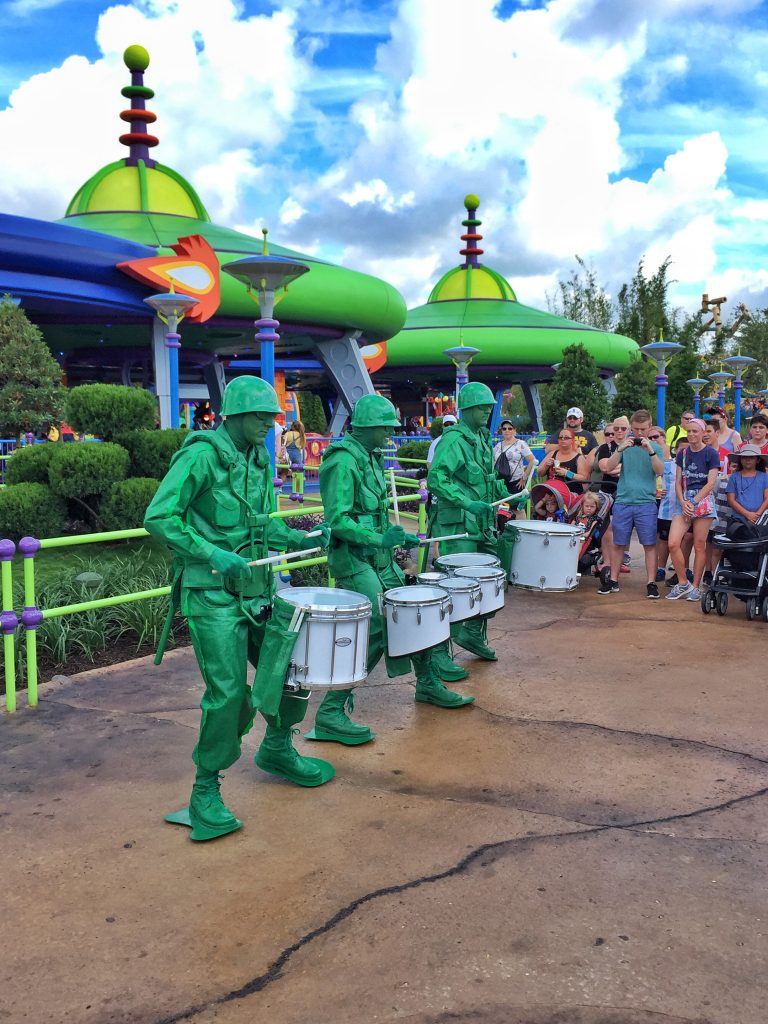 And no trip to Toy Story Land is complete without a ride on the Slinky Dog Dash coaster. 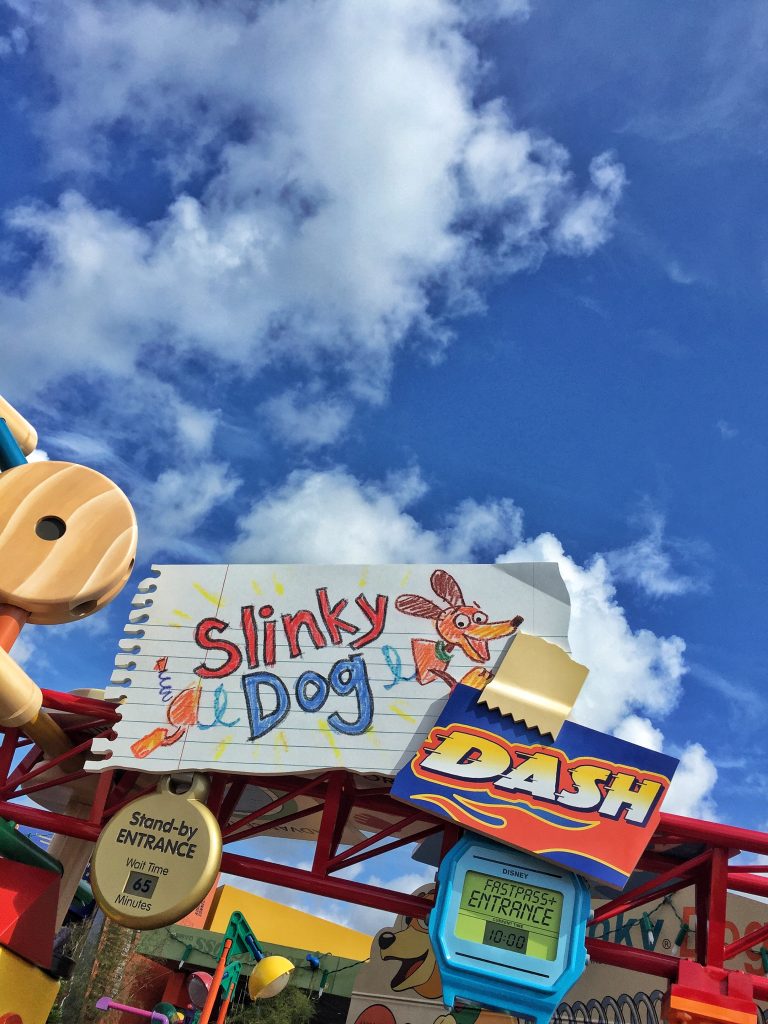 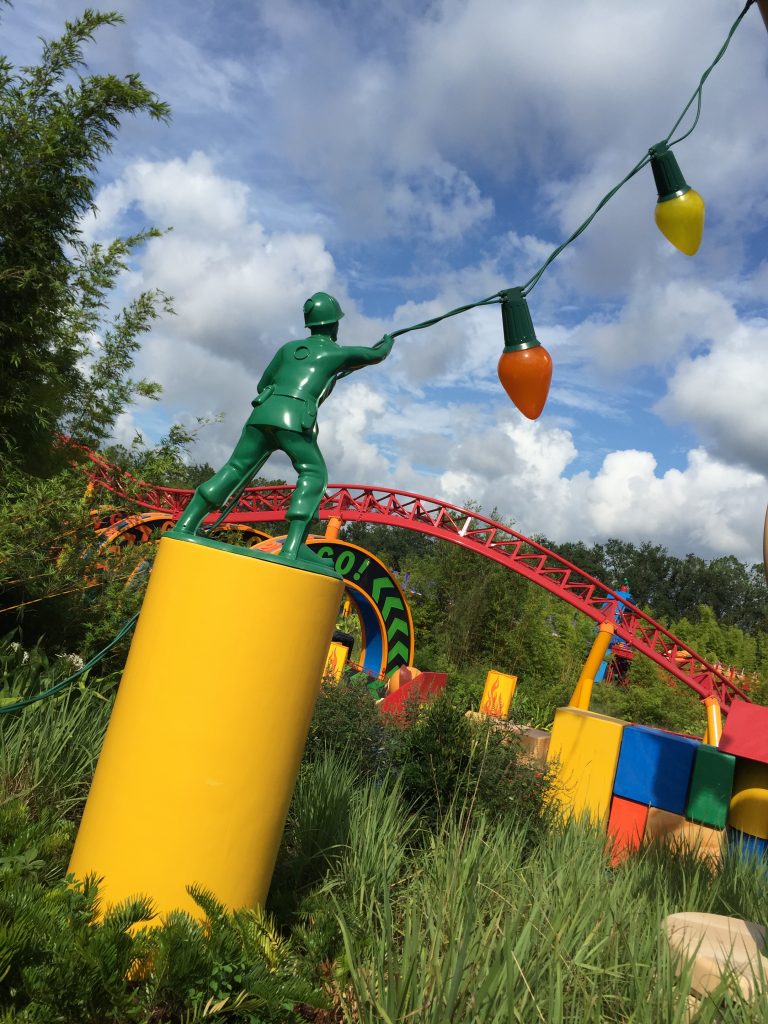 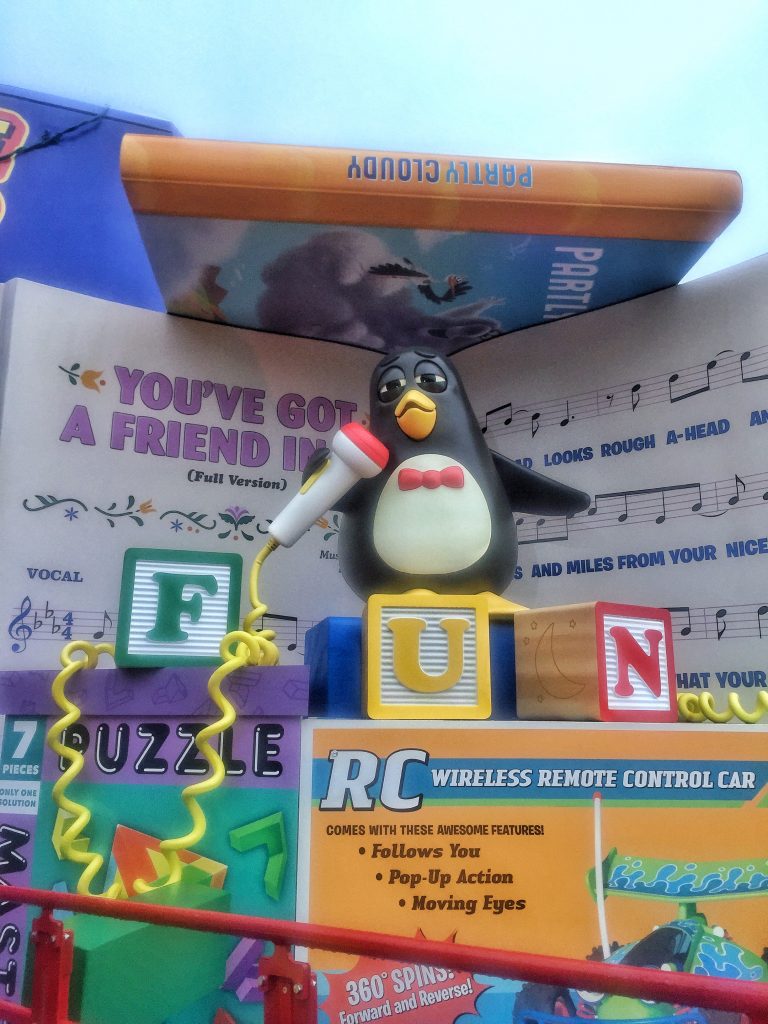 Toy Story Land is filled with fun details and photo opps, as well as Insta Famous walls to take pictures in front of. You can find the checkered wall and the popsicle stick wall at the exit of Toy Story Mania. I loved this domino wall at the entrance to the ladies room. 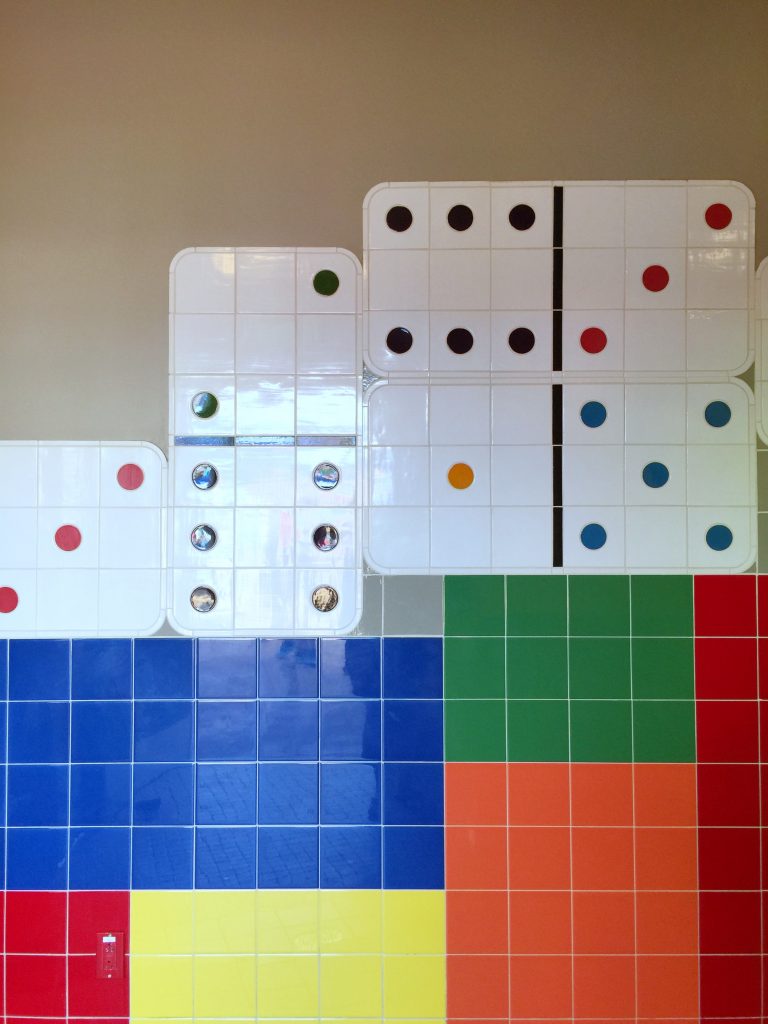 Since there’s not a ton of shade inside Toy Story Land, I think this may be an area of Disney’s Hollywood Studios that will be fully appreciated during Central Florida’s cooler months. It was still a fun area to explore nonetheless. 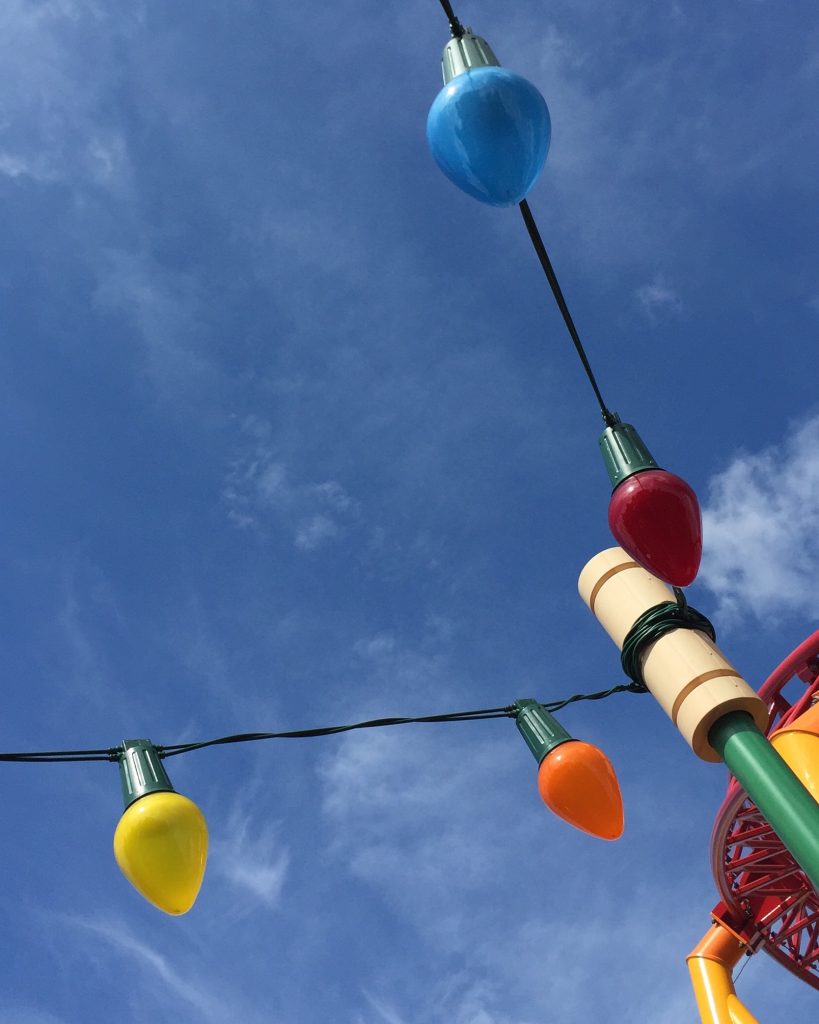 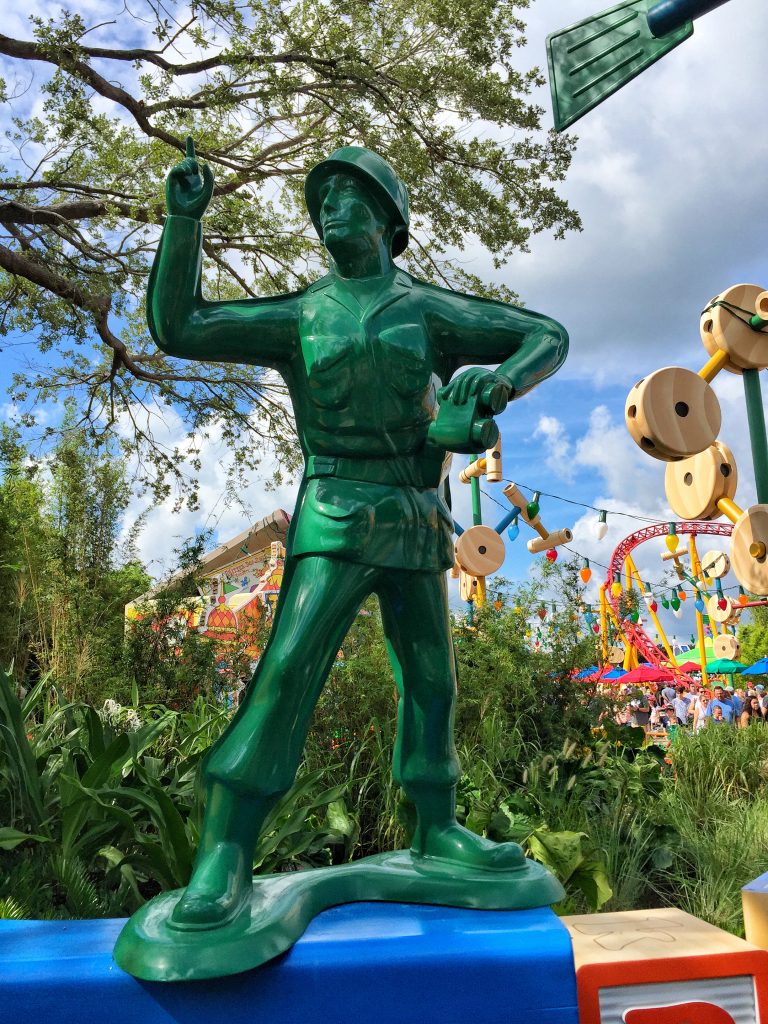 I was invited out as a media guest on this visit and provided fastpasses for the attractions. However, I am a Disney-loving cash-paying annual passholder. A portion of my food was covered by the Walt Disney World Resort.

WANT TO REMEMBER THIS OPTION? Save the “Vegan Food Review: Woody’s Lunch Box in Walt Disney World’s Toy Story Land” pin to your favorite Pinterest board. 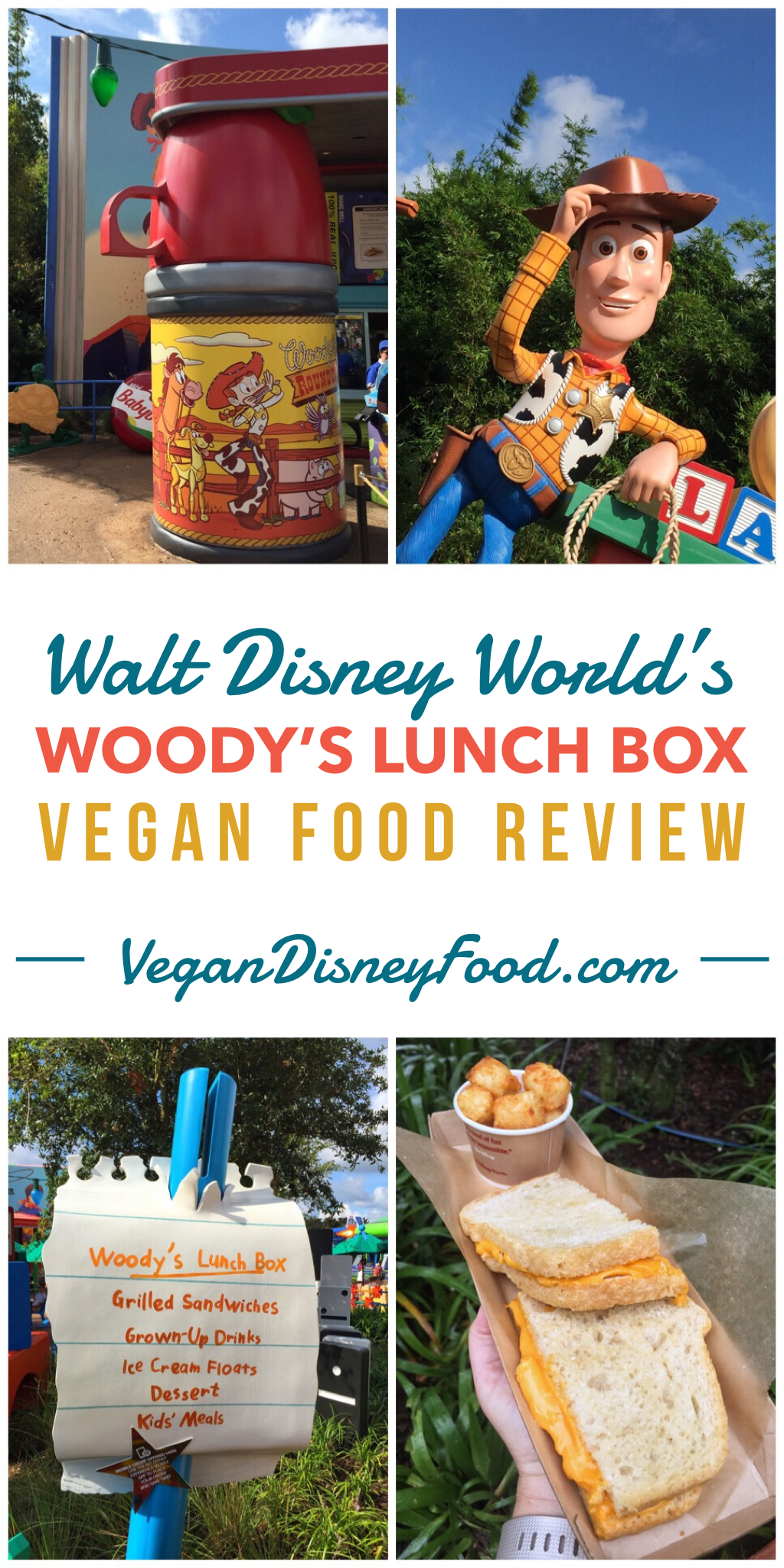