The newly redesigned lobby of one of Walt Disney World’s original resorts, Disney’s Contemporary Resort recently reopened in anticipation of Steakhouse 71’s grand opening on October 1. This new lobby pays tribute to the original aesthetic of the resort, designer and Disney legend Mary Blair, and some fun 70’s touches as well. We previously shared the all-new vegan Steakhouse 71 menu, but now we’ve dined there and want to share our vegan Steakhouse 71 review with you. 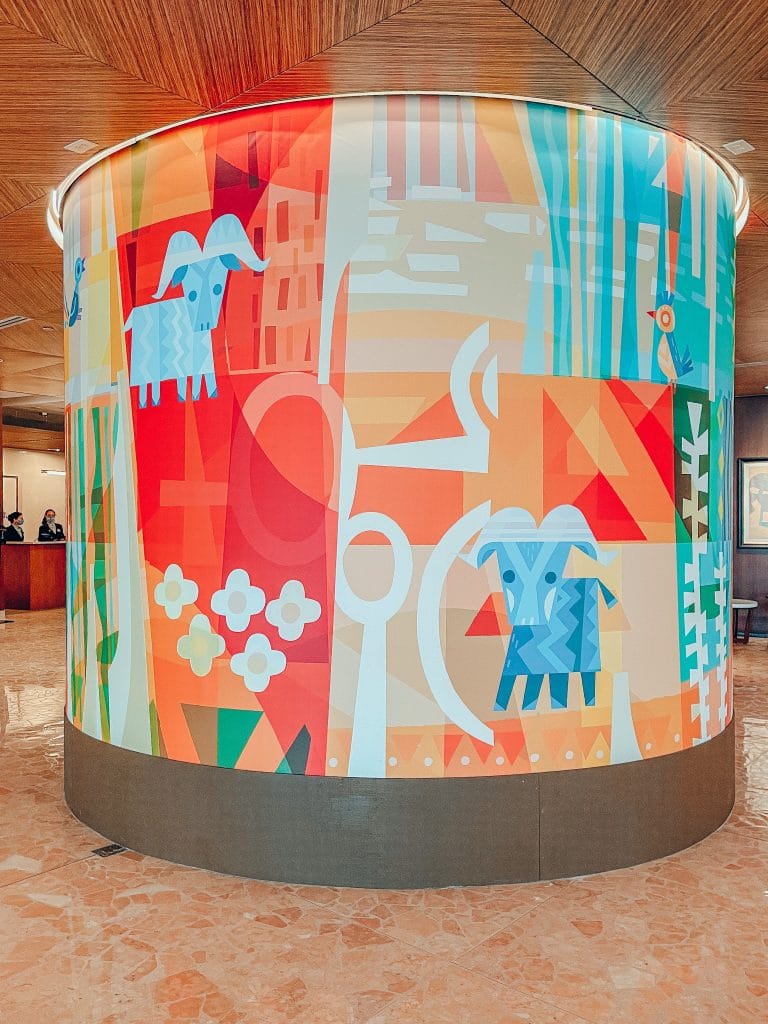 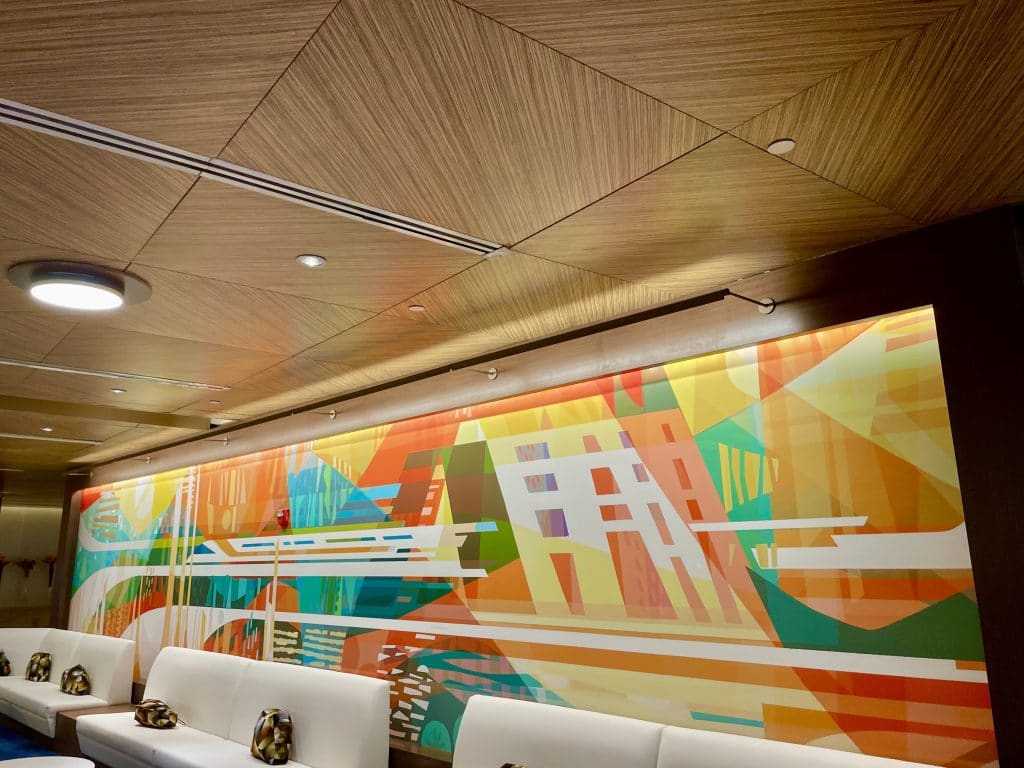 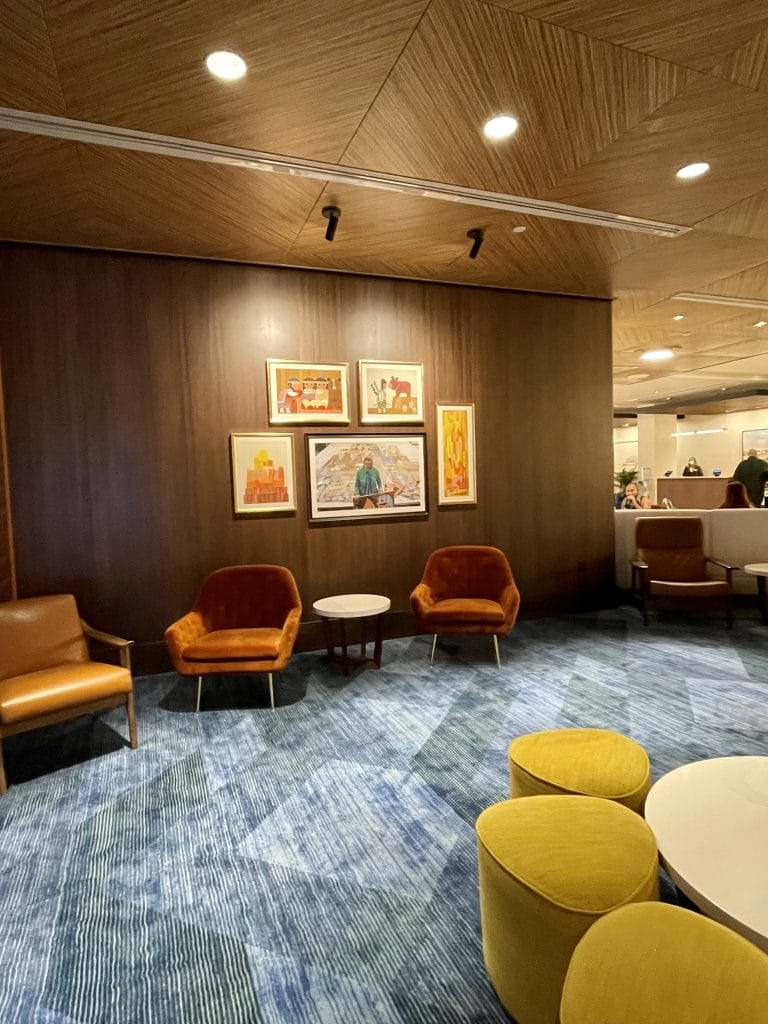 Steakhouse 71 moves in to where the Wave…of American Flavors once stood. The Wave was always a hidden gem, with its cauliflower tacos, tofu curry, and avocado toast breakfast options. The good news is, the avocado toast is still around for breakfast, and the chef who created the cauliflower tacos created the new Vegetable Wellington that is now the vegan entree at Steakhouse 71. Let’s check out the new space.

The hallway to the check-in area now features striking black and white photos from the construction of Walt Disney World and the Contemporary Resort.

The overall look of Steakhouse 71 is now bright and modern, with glass windows and minimalistic floral arrangements combined with warm wood tones and new mid-century style murals on the back walls. I really love the new look as it’s much brighter and more inviting. 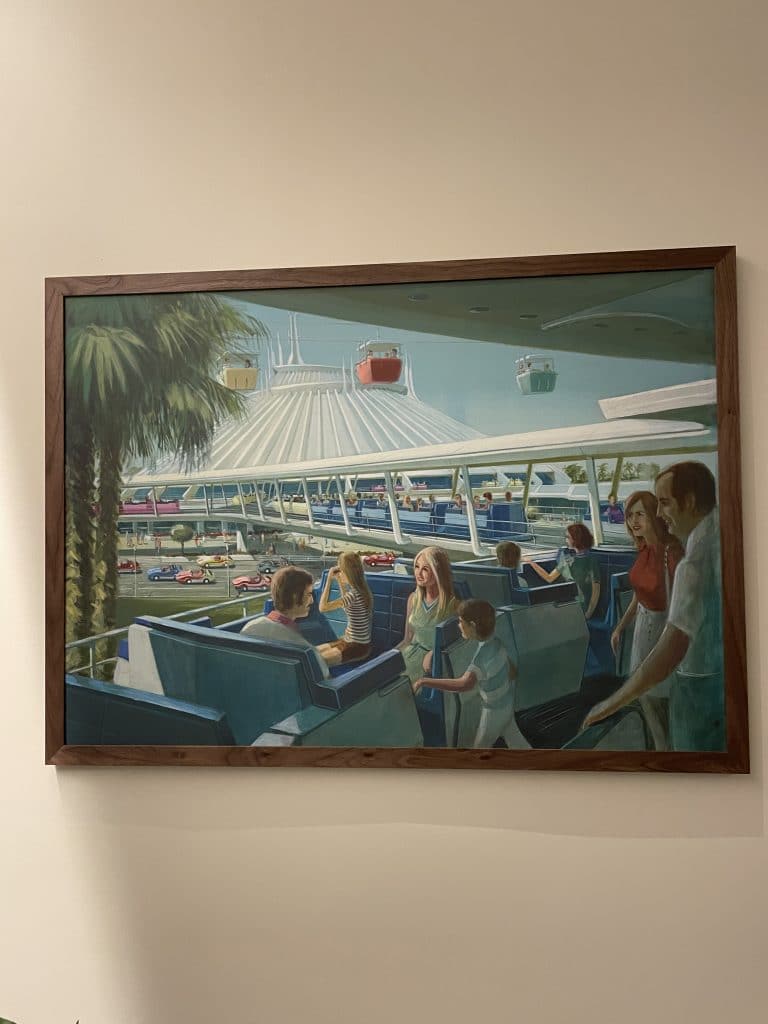 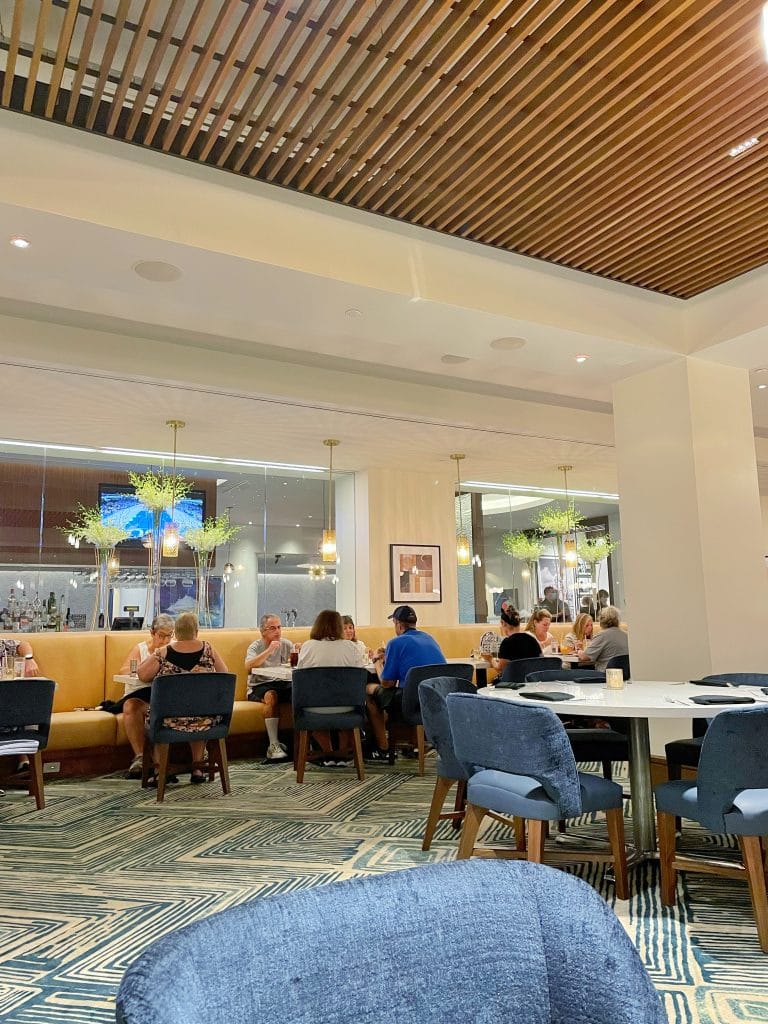 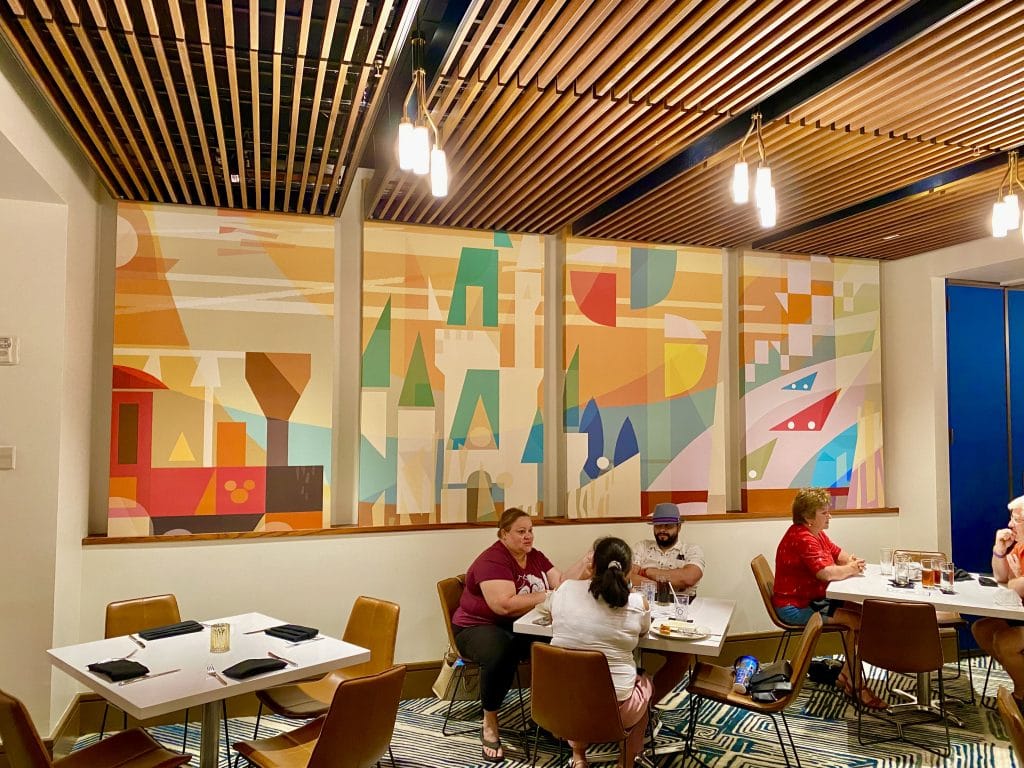 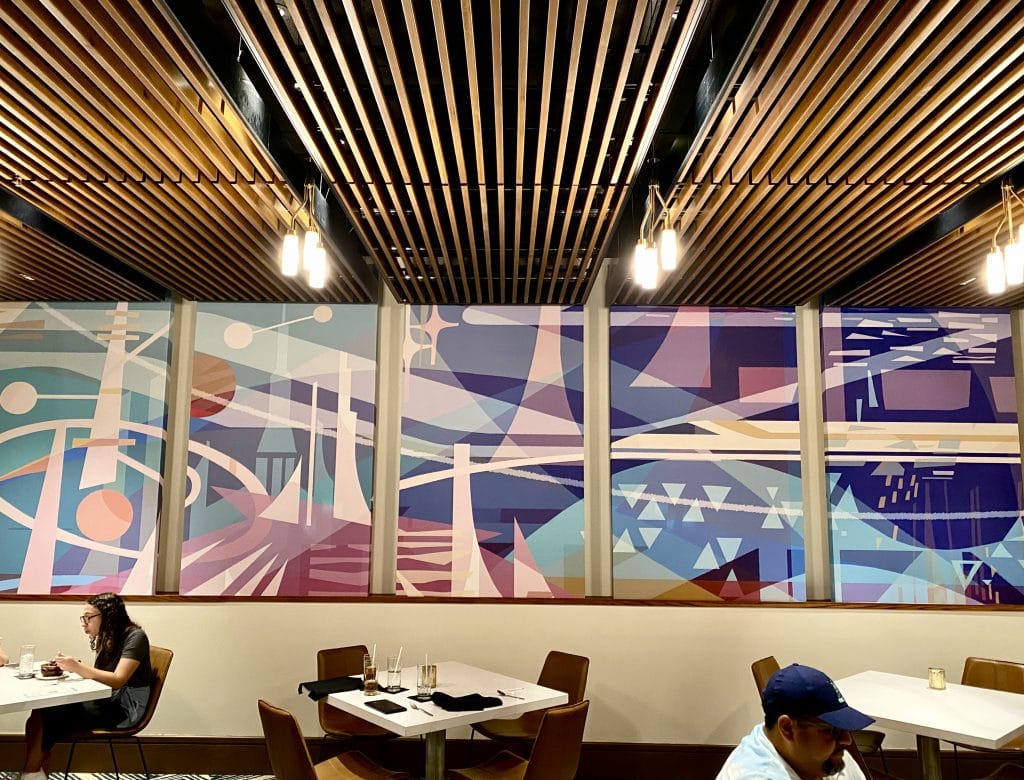 Now let’s get to the food! Steakhouse 71 offers a different menu for lunch and dinner, but for vegans, the menu is the same for both services. Keep that in mind if you have non-vegans dining with you. For the plant-based options, we have an appetizer, entree, and dessert, and long story short, they are all wonderful.

First up, completely vegan Steakhouse 71 onion rings – $9. Cheers rang out across the land when this menu was released and we saw we were getting onion rings. So often they have eggs and milk in the batter, but not here! 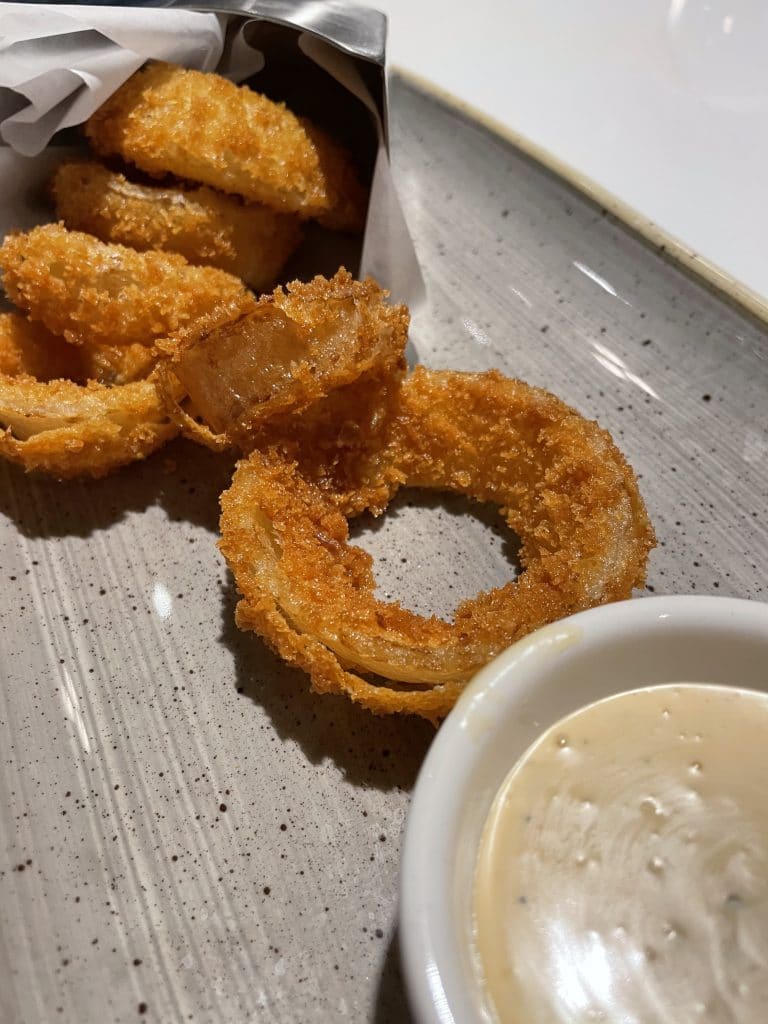 The plant-based onion rings are deep fried and served with a spicy ranch dipping sauce. The dipping sauce does have a bit of a kick, but it doesn’t linger. It’s a nice complement to the onion rings. 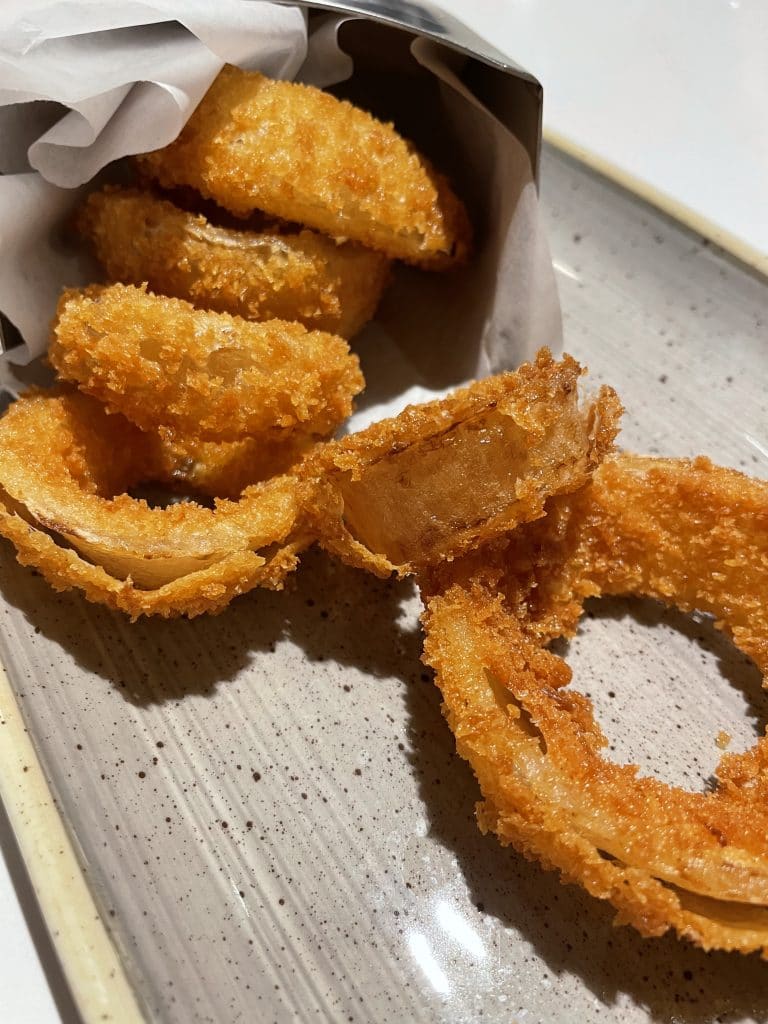 If you think these onion rings look good, you would be correct. They are SO good. The breading is so crunchy and seasoned perfectly. I immediately wanted another order. 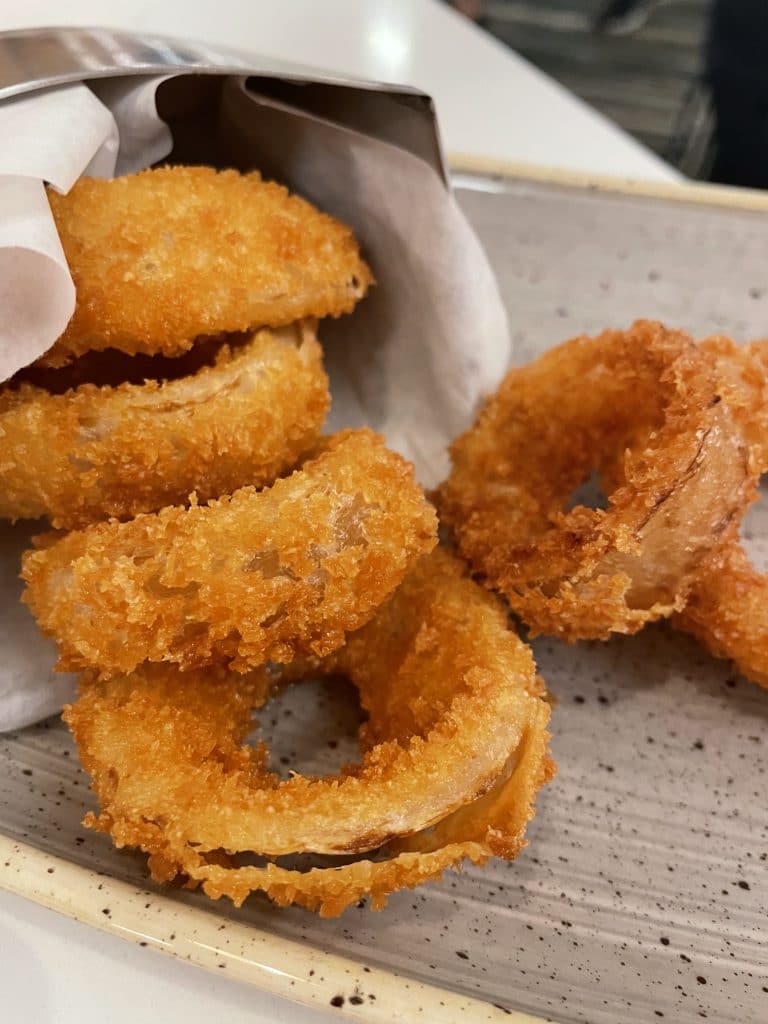 My only issue with these is that you get 6, or we got 6*. At $9 they aren’t too bad, but if you have a big grooup, you’re definitely going to want more than one order. *See update below!!!

Next up, the vegan entree – Vegetable Wellington – $26. As mentioned above, the same chef who created the cauliflower tacos created the Vegetable Wellington. The attention and hard work in this dish is evident. It is a work of art. For those unfamiliar with traditional beef Wellington, it takes an entire beef tenderloin and coats it in mushroom duxelles (diced mushrooms, onions, shallots, garlic, and parsley sauteed together) and wrapped in a puff pastry and baked in the oven. The vegetable version at Steakhouse 71 keeps the mushroom duxelle, which is coated over fire-roasted artichoke hearts and wrapped in the puff pastry. Again, it is just beautiful to see. 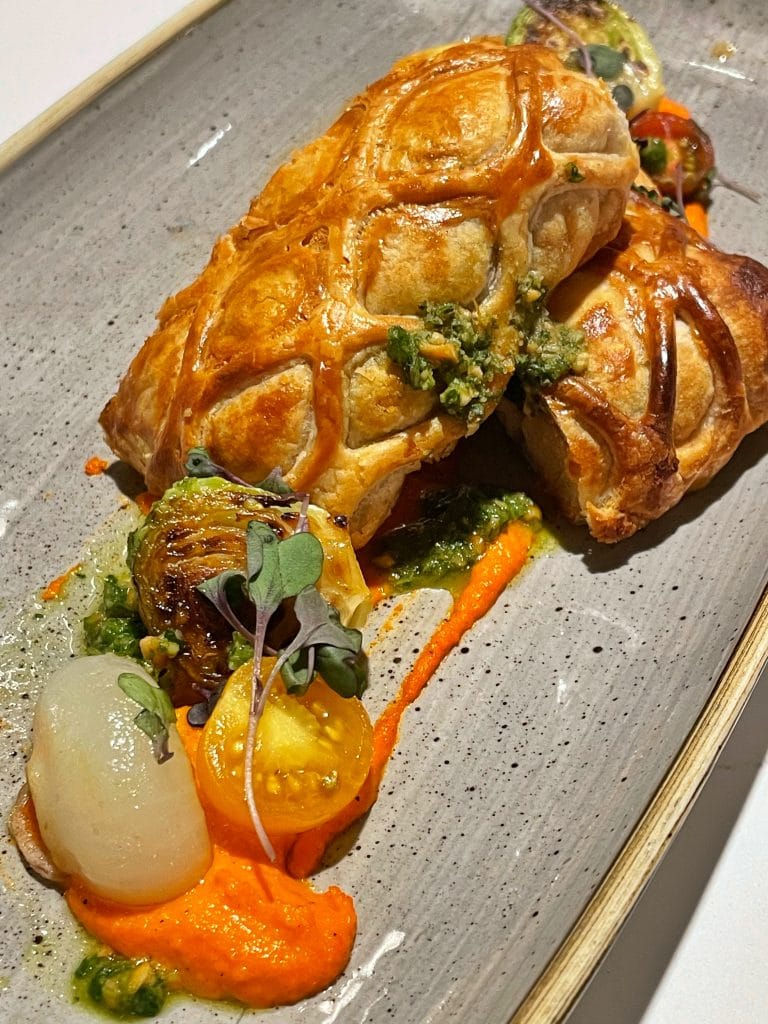 It is served on a bed of romesco sauce and pistachio pesto, with a sauteed Brussels sprout sliced in half, and some onion and cherry tomatoes. 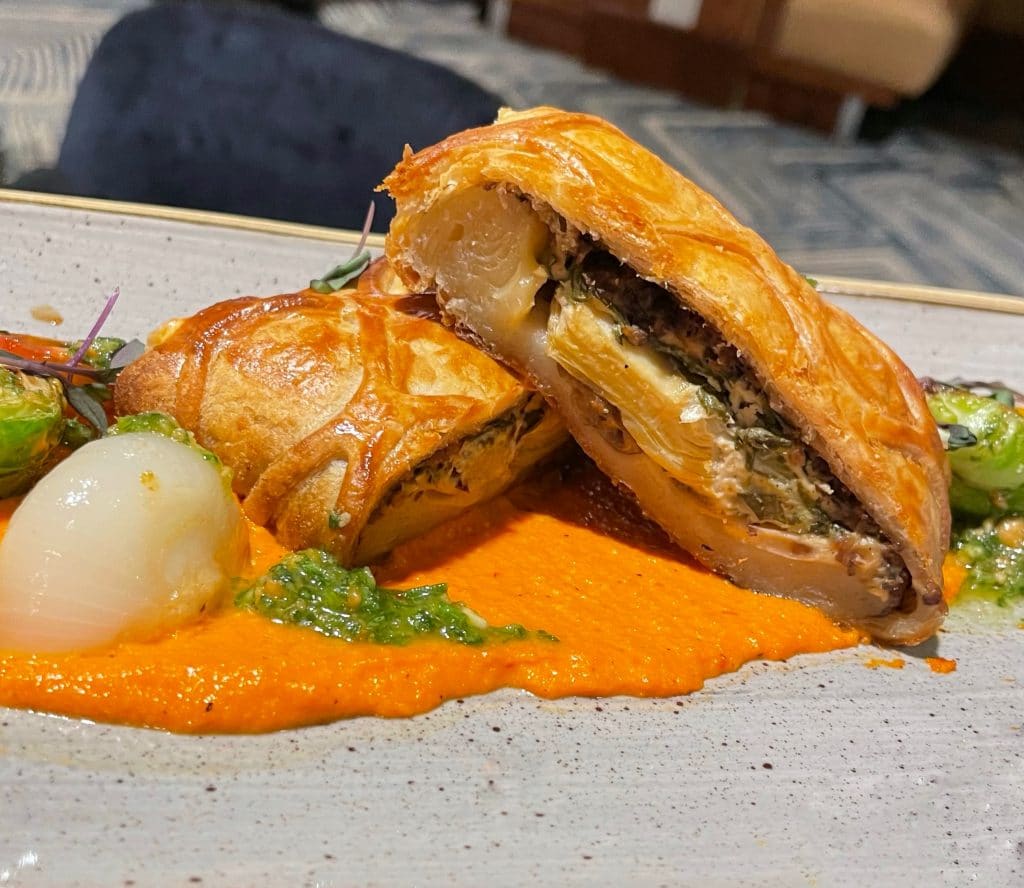 The mushroom duxelles is usually salty on its own, and the artichoke hearts also have a briny, salty taste, so if you are sensitive to that, keep that in mind. But if you have a bite with the puff pastry and the sauces, it all balances out and is a wonderful mix of flavors.

The puff pastry was crispy and flaky when cut into. This was such a wonderful dish, I’m counting down the days till I can get back here. Definitely a triumph for a vegan entree. 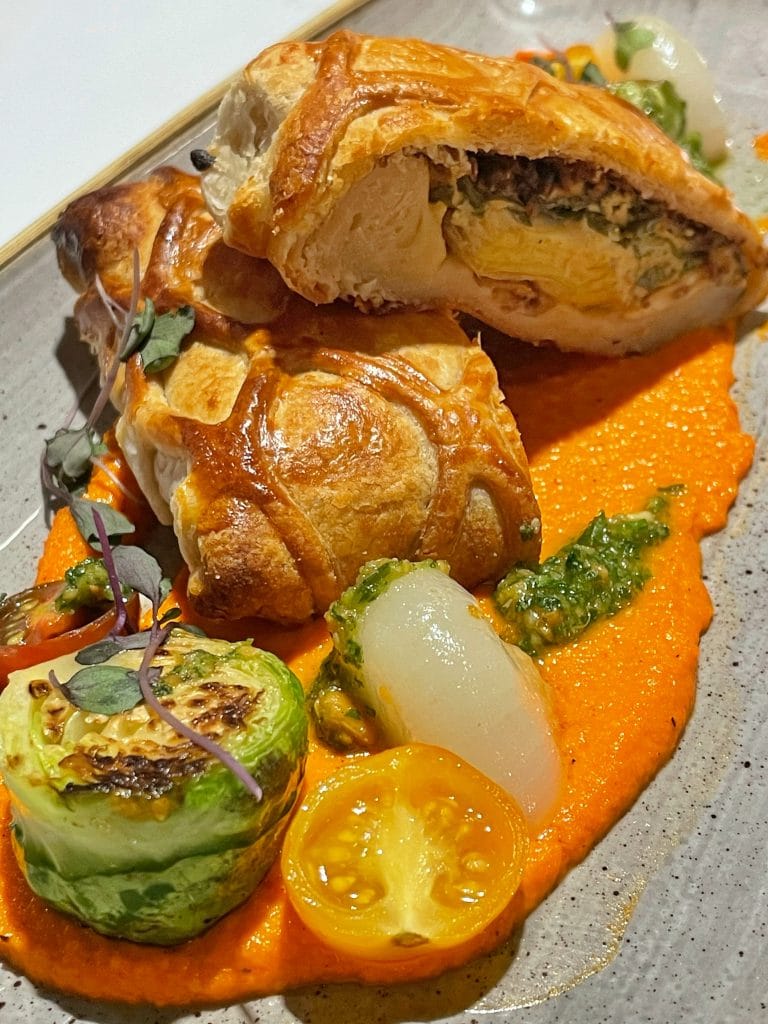 My one wish is that there were more Brussels sprouts, but at $26, in a steakhouse, I was very happy with this dish.

One thing to note, there is no complimentary bread service at Steakhouse 71. They do offer a house-made brioche loaf, which is sadly not vegan as it contains egg. However if you ask, they can make you a side of vegan sourdough bread, for $3. Earth Balance butter is also available. 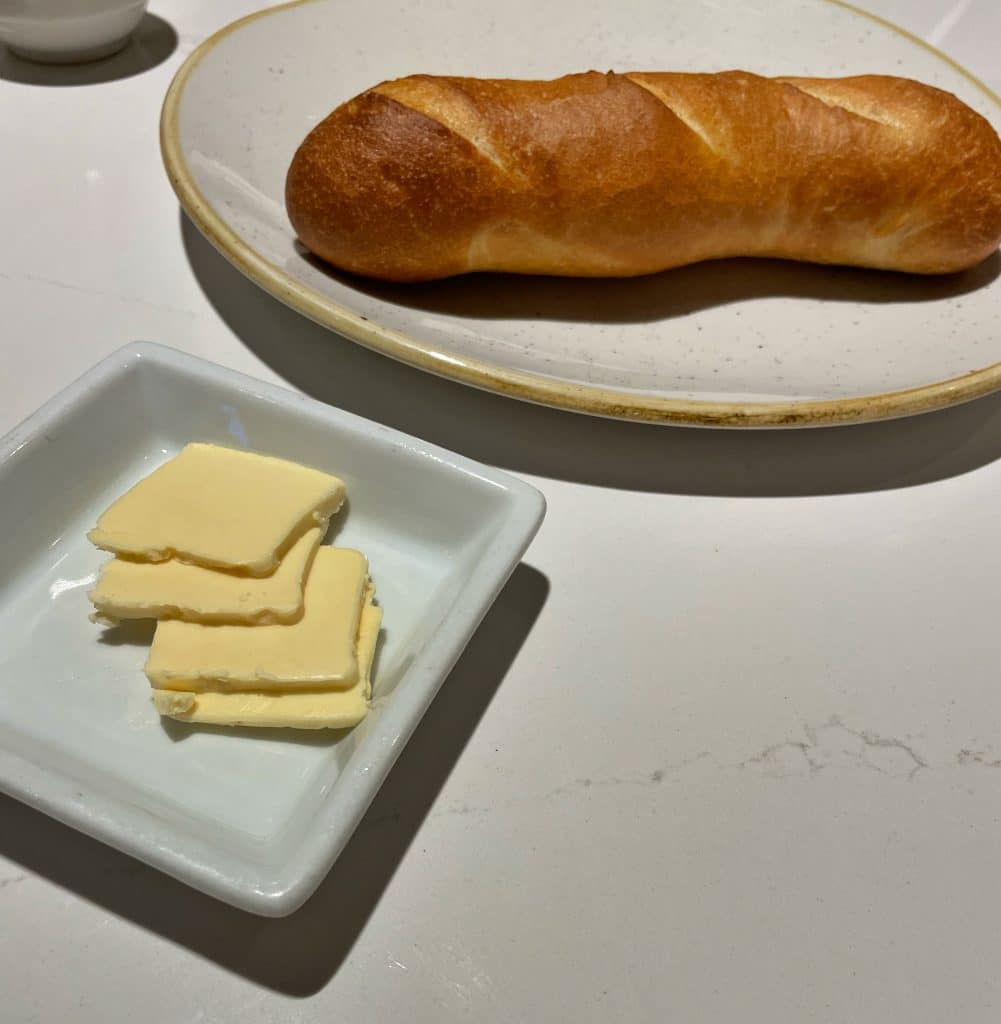 The bread was fresh and delicious with a great crust.

I also tried the new 50th Anniversary EARidescent Sip-a-bration drink – $10, which is on the kids specialty drink menu. It’s basically lemonade, and you get a little Mickey head of powdered mix to stir in on your own and it becomes a shimmery strawberry drink. They have other flavors and characters around Walt Disney World for the 50th. 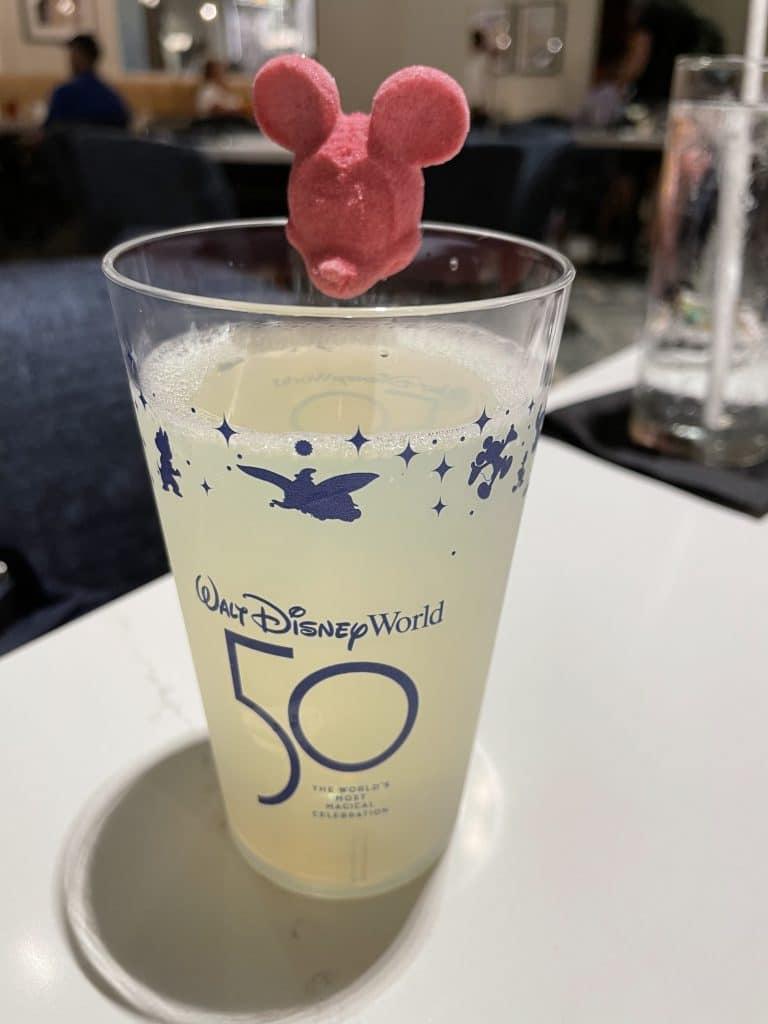 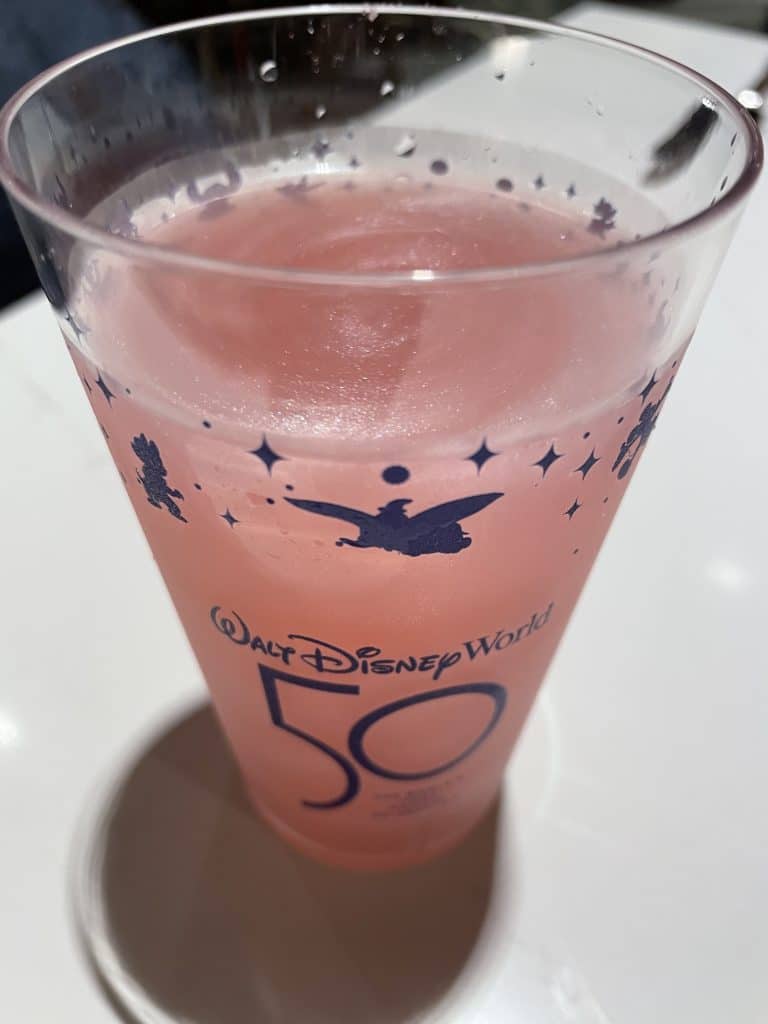 To end the meal, we have a totally new vegan dessert at Steakhouse 71, replacing the carrot cake from the Wave. I will admit, I was previously biased toward apple desserts, thinking they were going to be boring and bland. However the Apple Rose at Citricos and now this Apple Tart Tatin at Steakhouse 71, have converted me. This Apple Tart Tatin – $8 is complex and delicious. 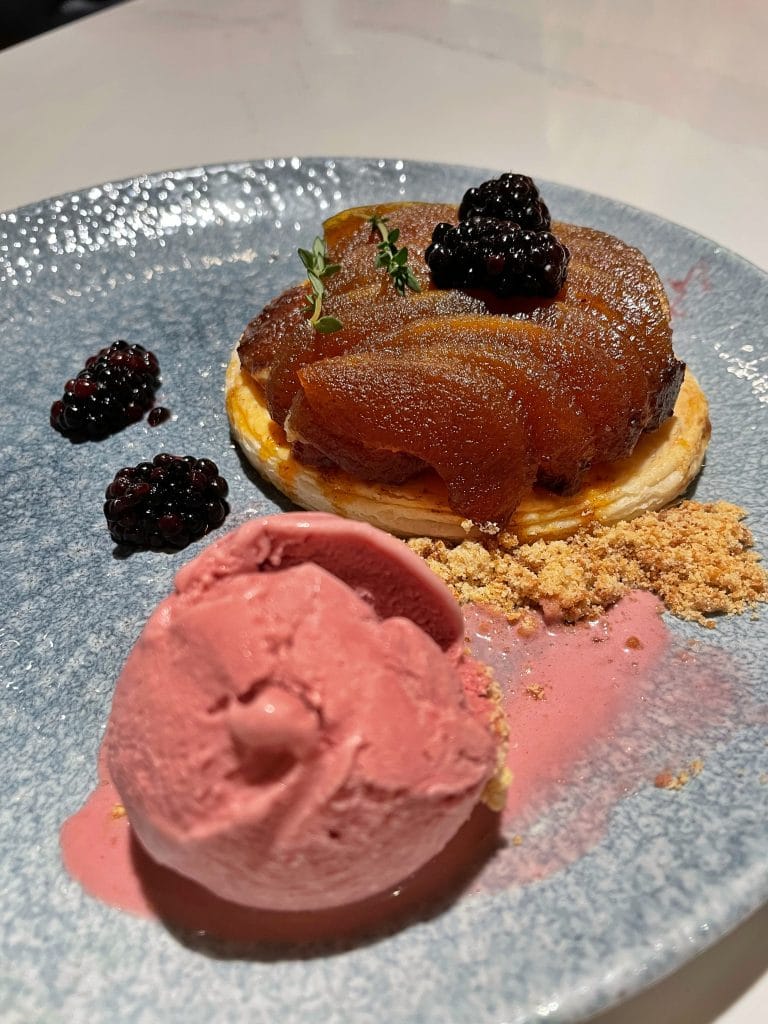 Served on a puff pastry tart, the Apple Tart Tatin is composed of caramelized Granny Smith apples, with a delicious crumble, blackberry gelato, and fresh blackberries. It’s sweet but not too sweet and a really unique and satisfying dessert. I wish I had room to finish it all! 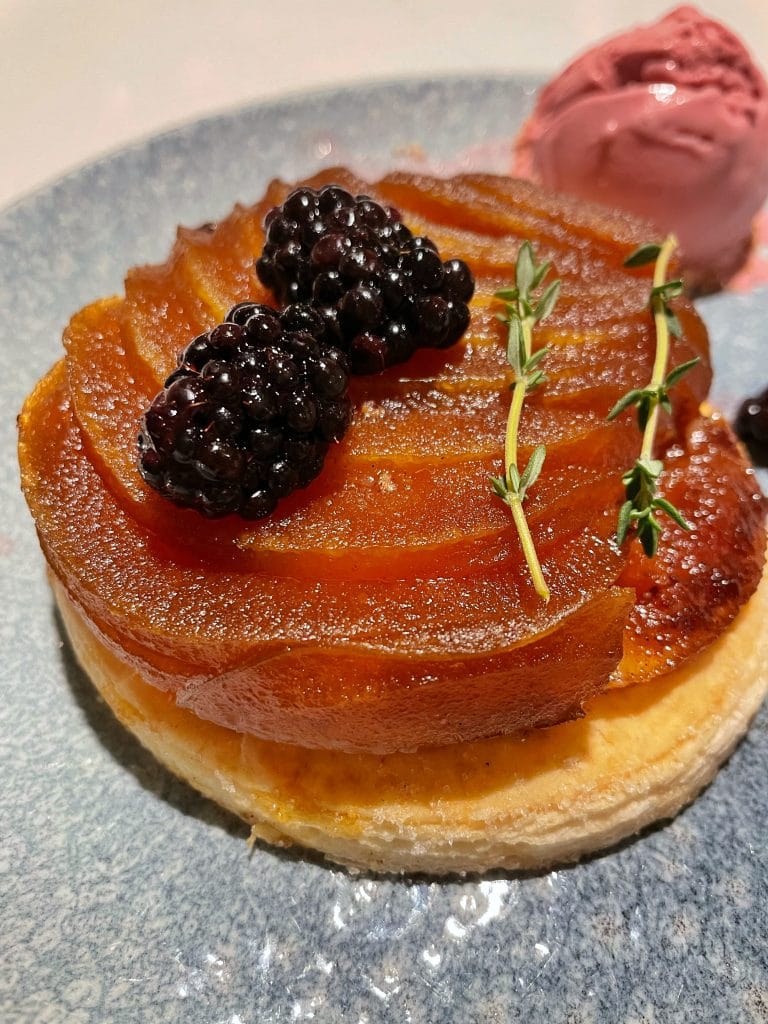 Overall, the chefs of Steakhouse 71 really upped their game and hit this out of the park. And that’s the extent of my sport metaphors. My only wish is that they would take these clearly talented chefs and have them create multiple vegan options! I know many people don’t care for mushrooms, and this really eliminates this dish for them. I happen to love them, so I loved this dish. It may be one of my new favorites on property. Steakhouse 71 takes some 1970’s classics and updates them for modern times, and they do it well.

Here’s our video review of all the vegan items at Steakhouse 71 – be sure you’re subscribed to Vegan Disney Food on YouTube to see we upload a new vegan review!

UPDATE! As of October 14, there is now a plant-based version of the Steakhouse 71 Stack Burger served at lunch! We went there to check it out and you can see our vegan Steakhouse 71 burger review here. 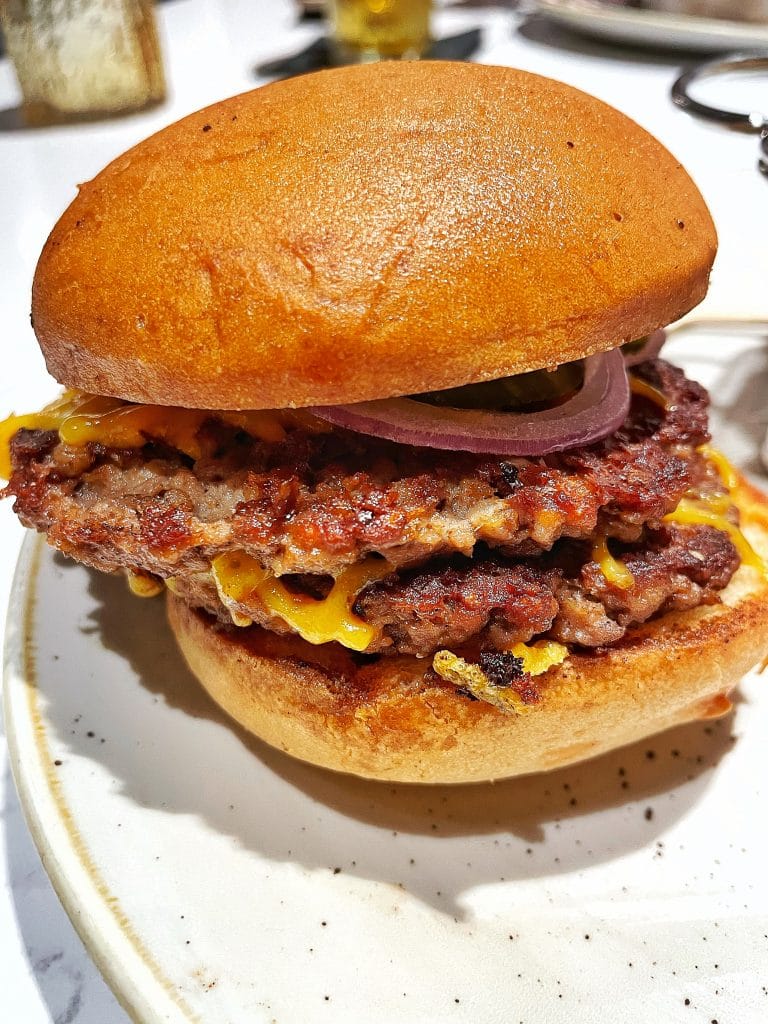 I am also SAD to report that the vegan Steakhouse 71 Onion Rings – $9 now only come with *4* onion rings. I think that’s kind of ridiculous and hope Disney remedies that soon. Surely the profit margin on onion rings is already high. Giving us only 4 and charging $9 is not cool. 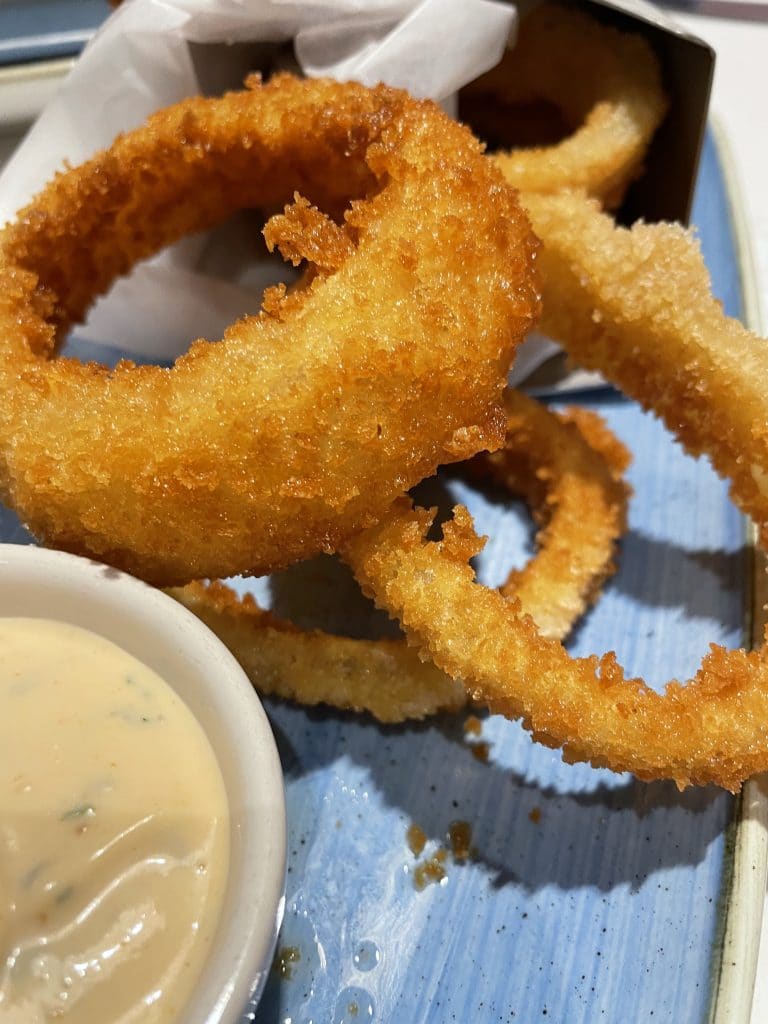 We hope you enjoyed our vegan Steakhouse 71 review! Let us know if you’re visiting Steakhouse 71 and what you thought of your experience!