Citricos has always been a favorite Signature Dining location at Walt Disney World, casually elegant, refined but not stuffy. Found on the second floor of the main building at Disney’s Grand Floridian Resort and Spa, it was a go-to spot for celebrations and date nights for locals as well as Walt Disney World visitors. We’ve reviewed the vegan dinner options at Citricos in the past, but the restaurant just received a massive refurbishment, giving it a subtle Mary Poppins theme. Disney noted that it was Mary Poppins Returns theming, but it really seems to be a more generic homage to the character of Mary Poppins herself. 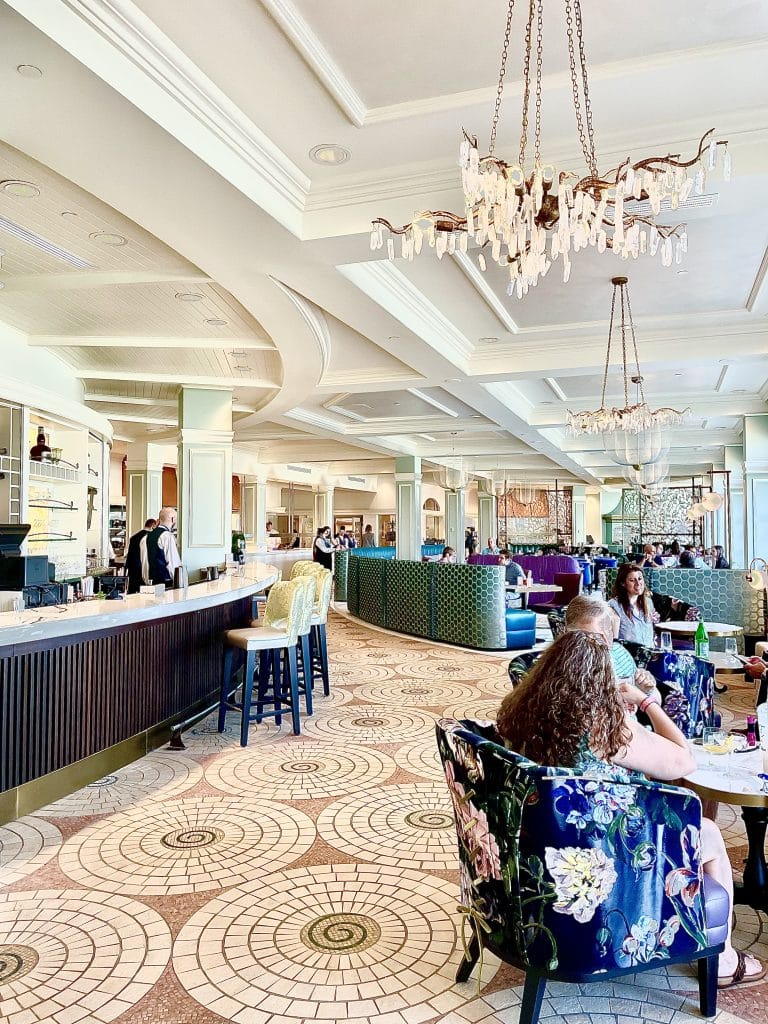 The lounge seating area features lighting with little birds on it, of course reminiscent of the original 1964 film. There are prints of Cherry Tree Lane around the restaurant and butterflies on other light fixtures. The wine tasting/event room has the cutest props of all – a coat rack with Mary’s carpetbag hanging there, along with her infamous parrot-head umbrella. Just cute little touches for those in the know, but not overwhelming for those looking for an sophisticated dining spot worthy of the “Signature Dining” moniker.

With the re-themed reopening, we also got a whole new menu, which meant a new vegan Citricos menu too! We secured an opening-night reservation and ordered all the vegan things to share our thoughts with you! You can also watch our Citricos dinner video review if you’d like to see the food in its natural environment, we’ll link that below. 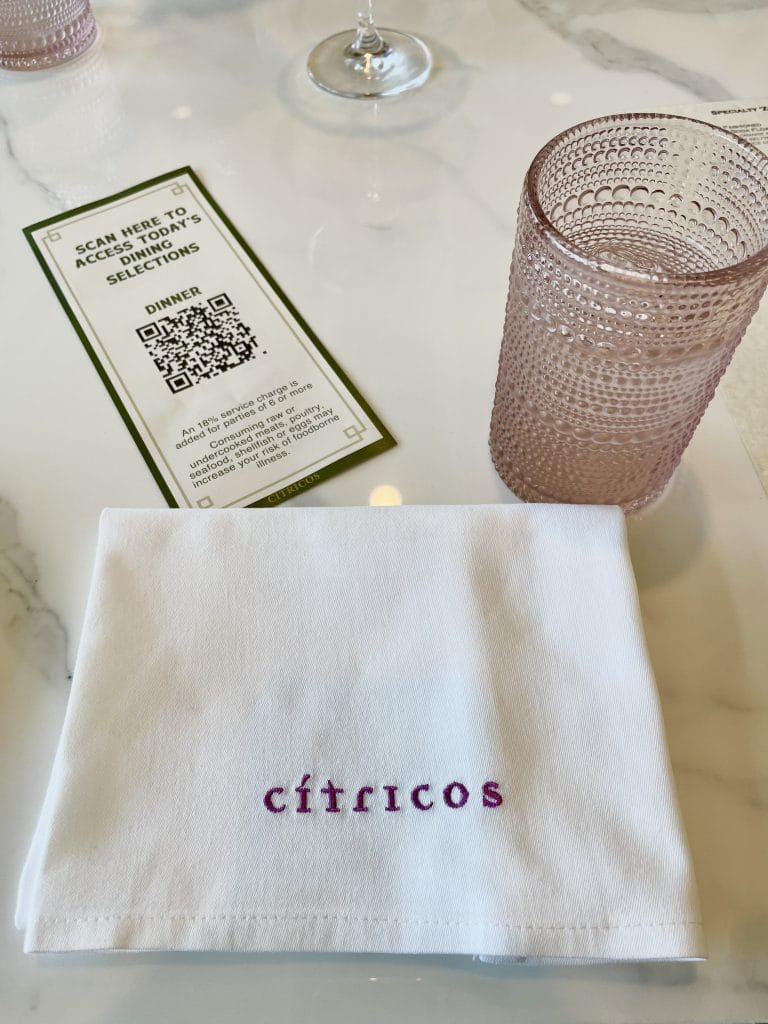 We had a chef come out to speak to us since there was a little confusion with our server thinking vegan = gluten-free. This is why it is always important to speak to a chef. Unfortunately servers just sometimes aren’t educated on what vegan/plant-based actually means and while they mean well, if it isn’t an allergy, they tend to just assume things will be okay that may not be. Now lets get to the vegan Citricos dinner options: 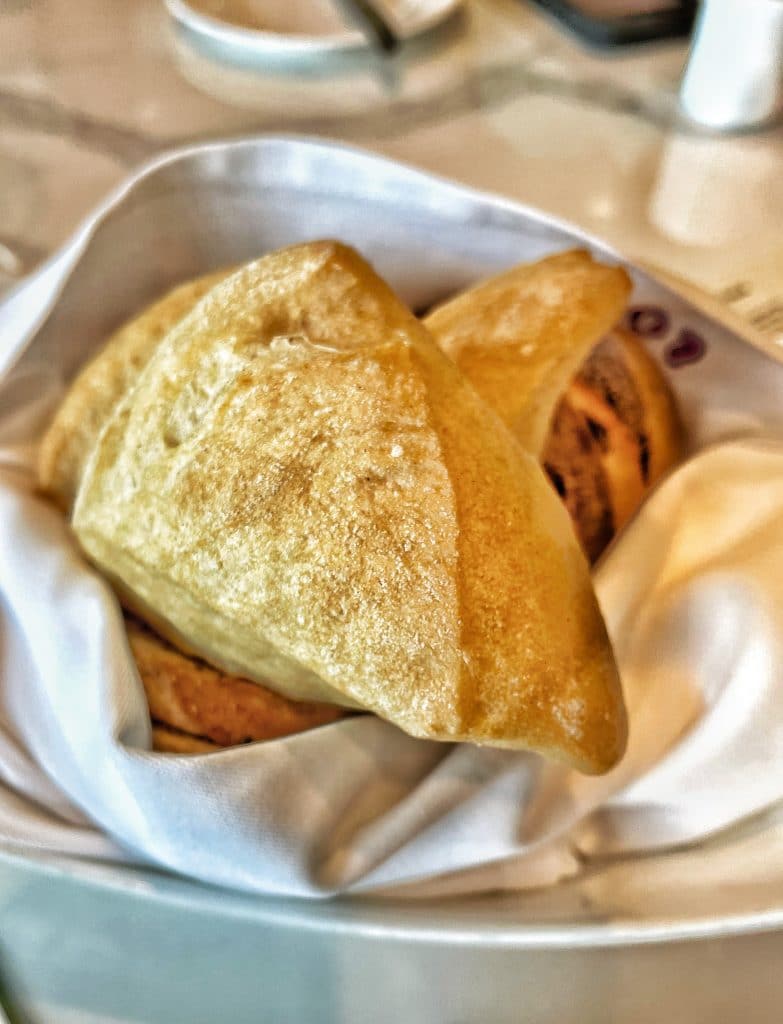 The bread is also completely vegan as-is, which is always a nice bonus over having to be served the gluten-free rolls which turn to rocks if you don’t eat them immediately. They offered us olive oil with the bread and also have Earth Balance butter. The chef kindly brought out some with the same salt on top of the regular butter. 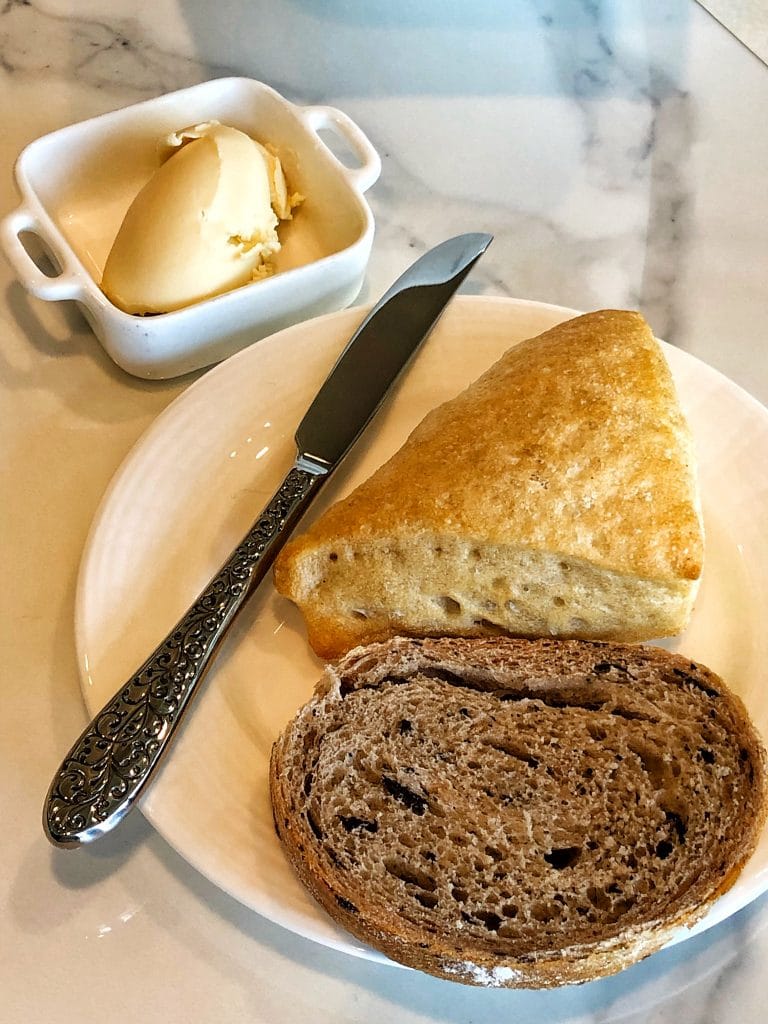 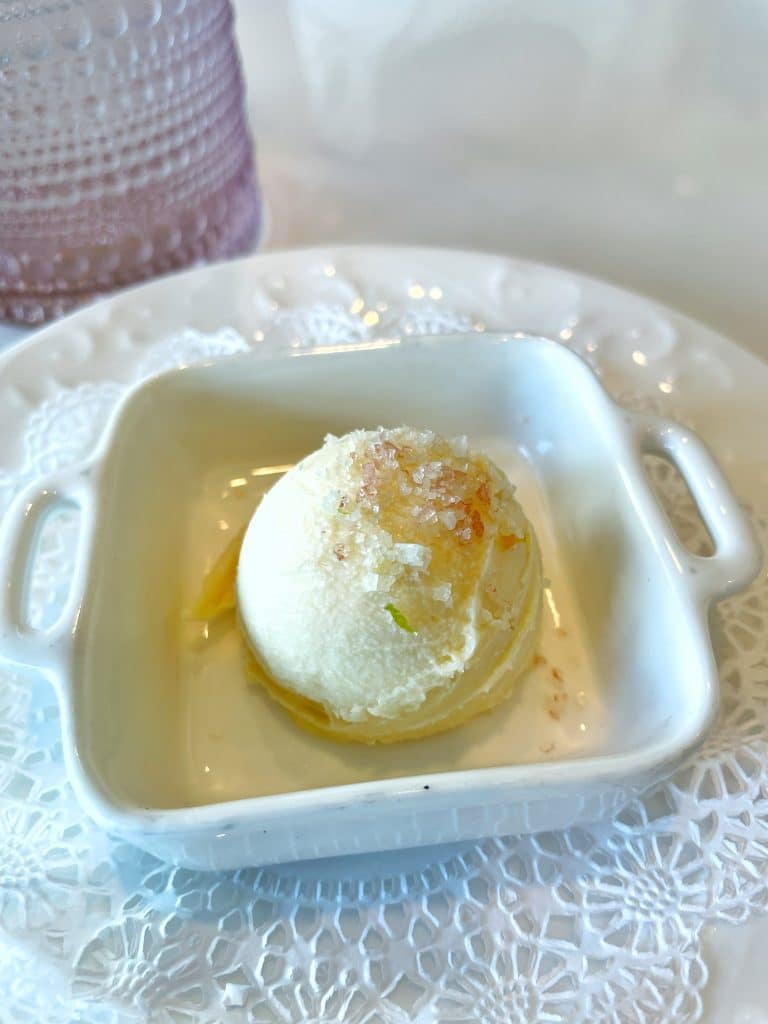 Personally, I would not order this again. For $16, it just wasn’t worth it and the strawberry preserves was an odd combo with the mixed greens.

Next up, the Wild Mushrooms Arancini which is vegan as-is. These were wonderfully delicious to me. Crispy and flavorful, you are served 3 arancini with risotto and wild mushrooms inside. The arancini aren’t too mushroom-heavy at all. Served on a bed of onion jam, which was amazing, with microgreens dressed in the Champagne vinaigrette, and vegan truffle aioli on the side. I would eat an endless amount of these if I could. 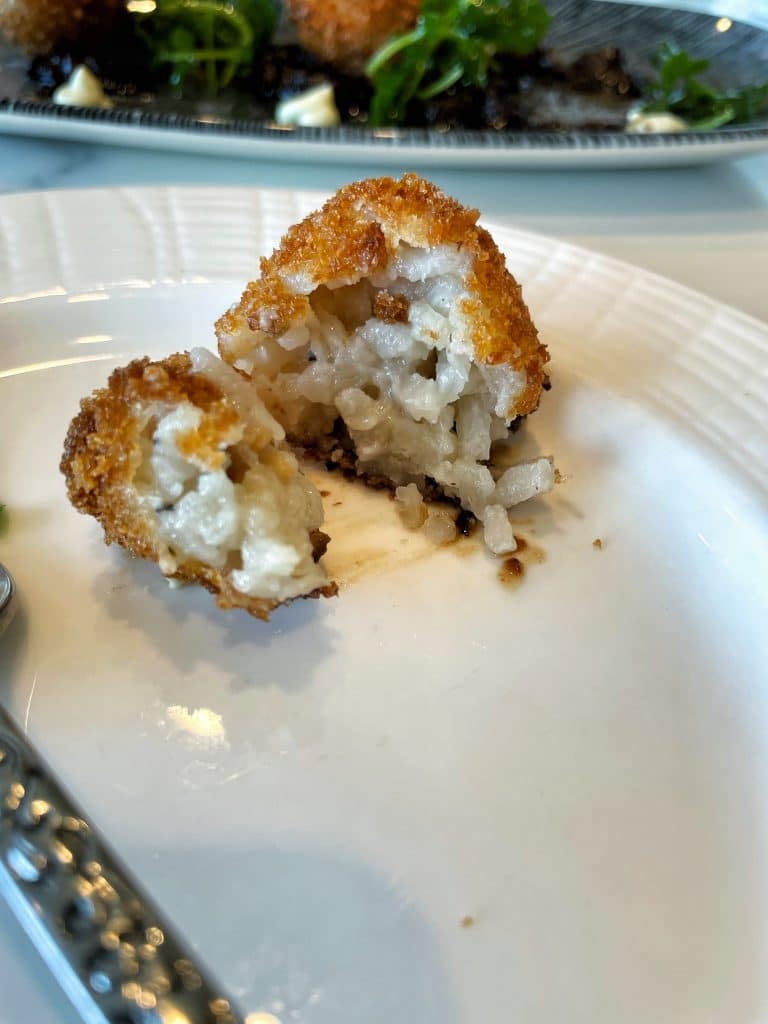 The main entree was a bit of a disappointment. We had high hopes, after the chef described the house-made rigatoni pasta and yellow tomato “yolk” on top.

The sauce was very raw-tomato in flavor, similar to a bruschetta tomato sauce, not a Bolognese that has been simmering all day. The flavors just weren’t there, it was very bland and one-note. 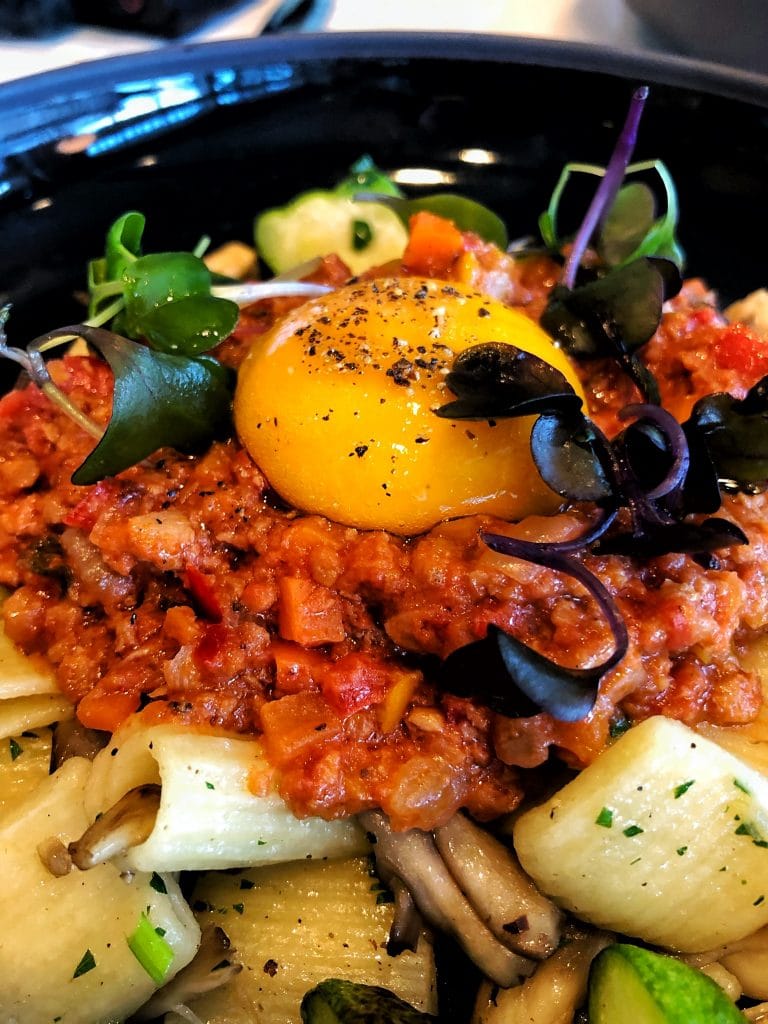 Keep in mind, this was opening night and they were having some issues with a few other menu items, so this may improve over time, but we of course want to tell it like it is and share our experiences, especially with a $34 price tag for this dish.

PRO TIP: If you’re looking for a must-try Vegan Rigatoni Bolognese, head to Trattoria al Forno, which has it all figured out. Delicious, plentiful, and worth it.

The Citricos “Enhancements” section features a vegan option, the Smoked Cauliflower with Green Curry. I almost forgot to order this but remembered right as we were about to order dessert, so they quickly brought this out and I’m so glad I got to enjoy it. The smokiness of the cauliflower was very pronounced and combined perfectly with the green curry sauce. This is a must-get.

Lastly, the perfect ending to the evening was the Apple Rose dessert. It is very easy to make an apple dessert that doesn’t stand out, but that is not the case here. 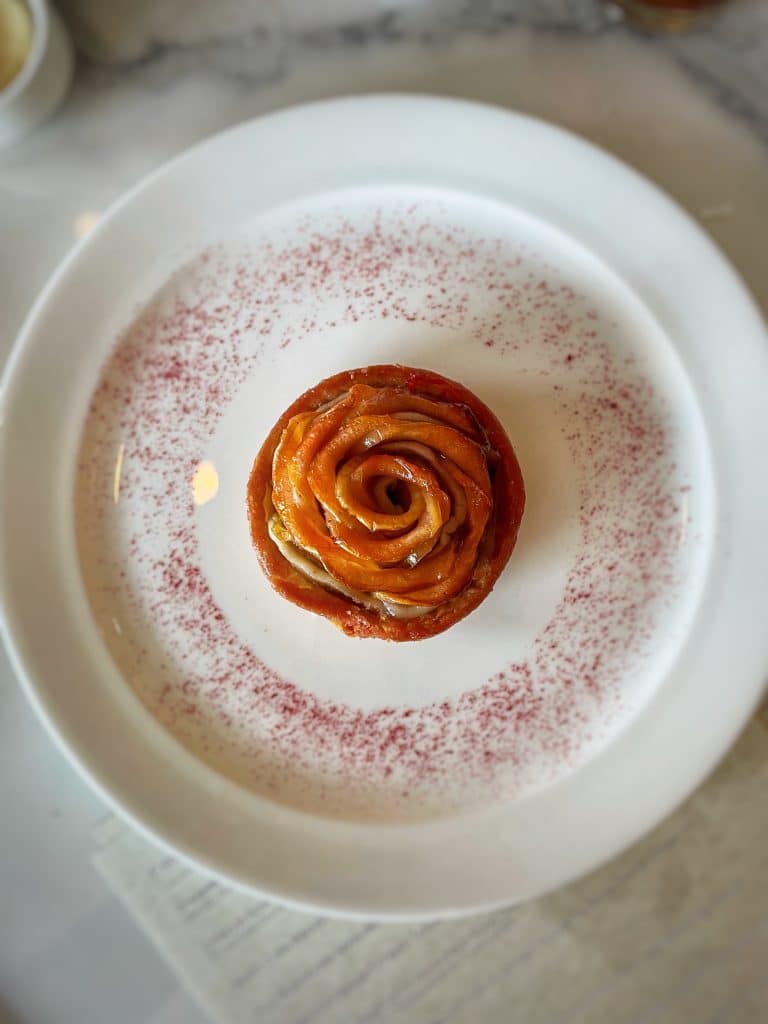 The tart is served in a vegan pie-crust, lined with marzipan and raspberry preserves, then the petals of the flower are apples.

Paired with the best vegan ice cream I have ever had. Which is no surprise, since the previous title holder was the vegan coffee ice cream served with the vegan dessert at Citricos before the refurb. I don’t know who’s making the ice cream back there, but keep doing it. I can’t overstate how delicious this dessert was. 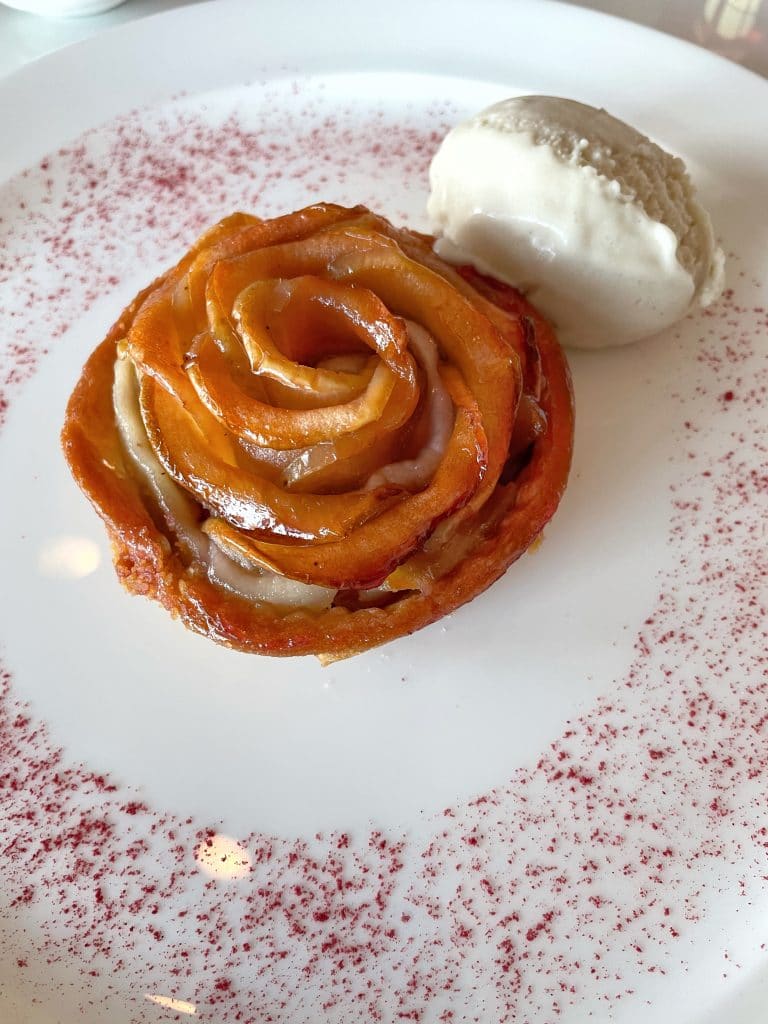 As you can imagine, my recommendation for vegan options at Citricos is to enjoy the Arancini, the Cauliflower, and the Apple Rose. However, I know most people will want an entree experience here. I can only hope that the Bolognese will improve if others feel the same way we did with this dish.

Reservations are definitely recommended at this Signature Dining location. You may also order from the full menu in the lounge area.

A bonus to timing your Citricos dinner reservation right is you can step out and view the Happily Ever After fireworks by the water. 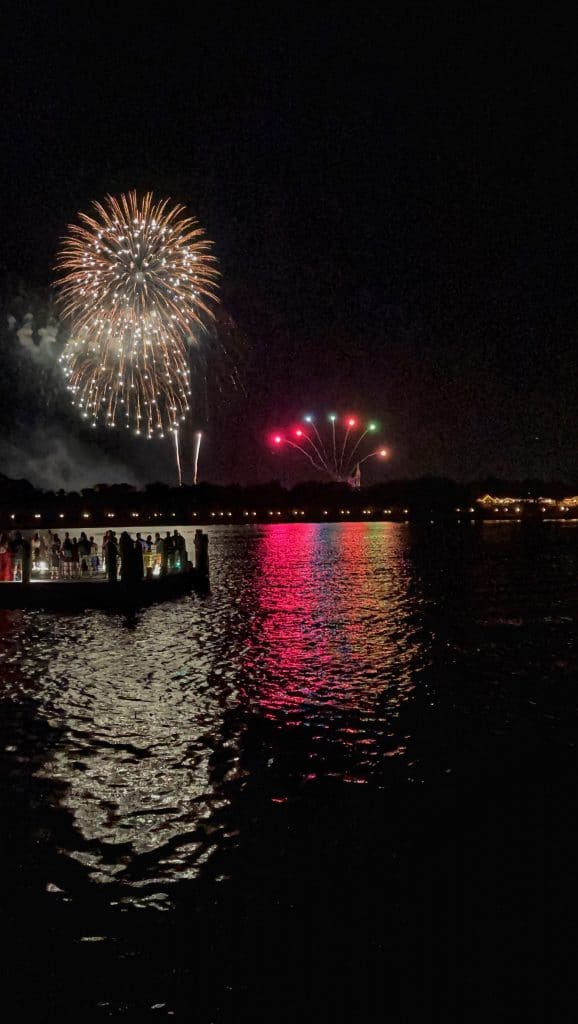 You can see more of our experience on our video review here. Be sure to give it a thumbs up if you like the review and be sure to subscribe for the latest Vegan Disney Food video reviews.

If you visit the newly reopened Citricos in the Grand Floridian and try the vegan dinner, we’d love to hear about your experience. Let us know in the comments or share with us on social media. Be sure to tag us in your photos on instagram @VeganDisneyFood or #VeganDisneyFood so we can see your vegan foodie discoveries!