Trattoria al Forno has been in our vegan news feed quite a bit in the last few weeks. We brought you the new Mickey-shaped vegan pizza last week, modifiable from the kids menu. Now they’ve redone the entire Trattoria al Forno menu with a new vegan pasta option in the Plant-based Rigatoni Bolognese. The previous option of vegan risotto is no longer available. There are a few other plant-based items that we vegans can enjoy and we’ll cover them all for you below. 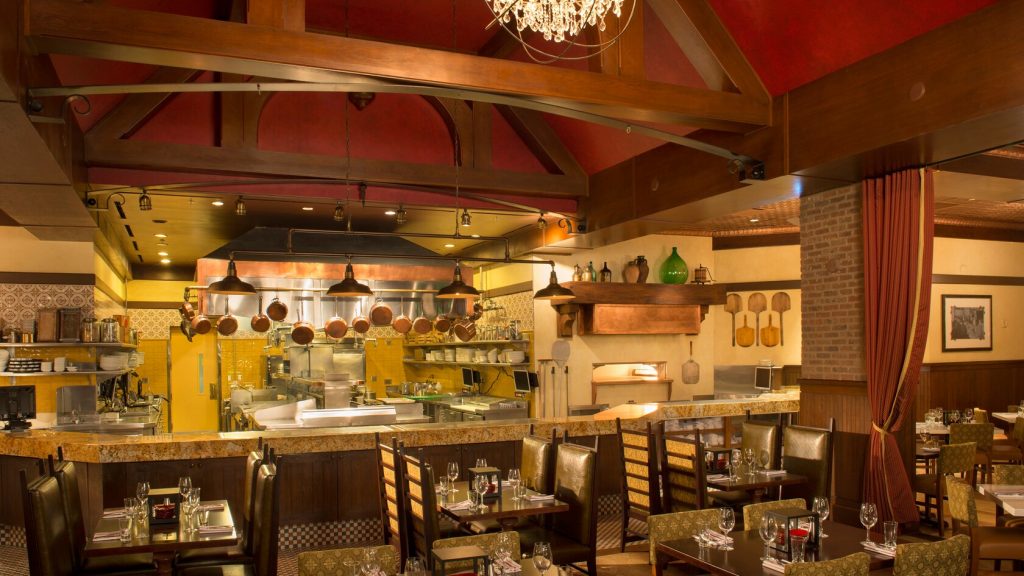 One of my favorite parts of Trattoria al Forno is the ambiance. It’s a cozy, open-kitchen designed space, with the Boardwalk Pizza Window taking up part of the dining room. The wood-fired pizza oven for the restaurant is adjacent to the open kitchen. As a result, the whole space is filled with wood-fired bread-cooking smells, and it’s delightful. 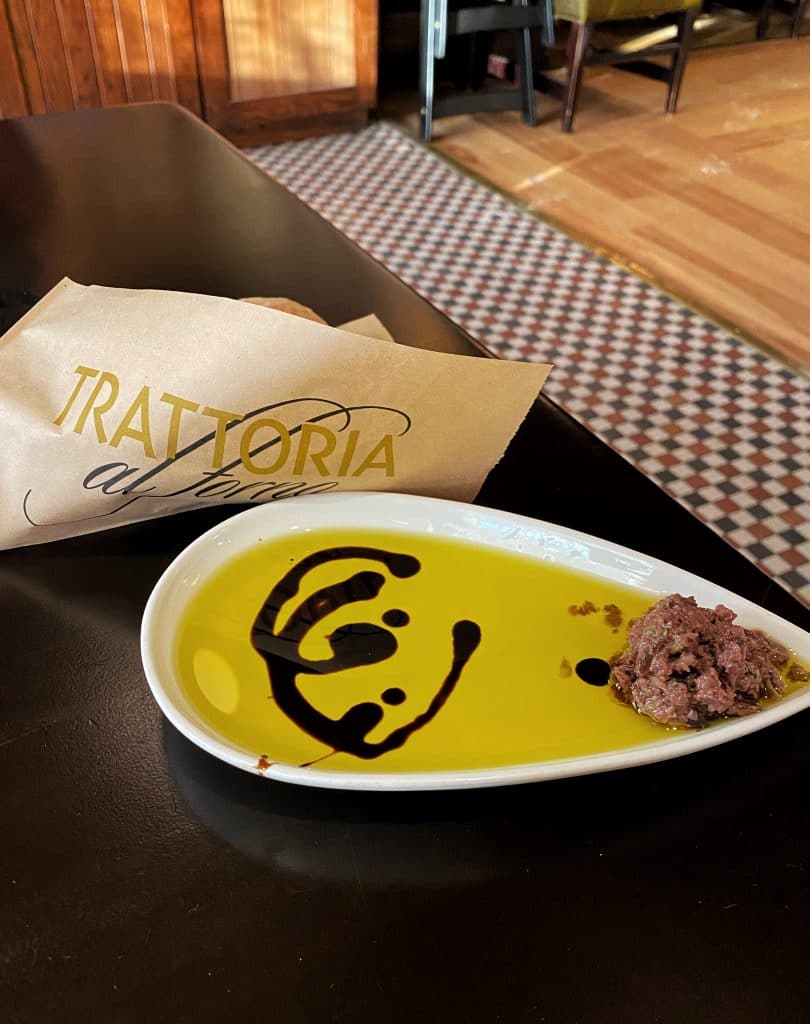 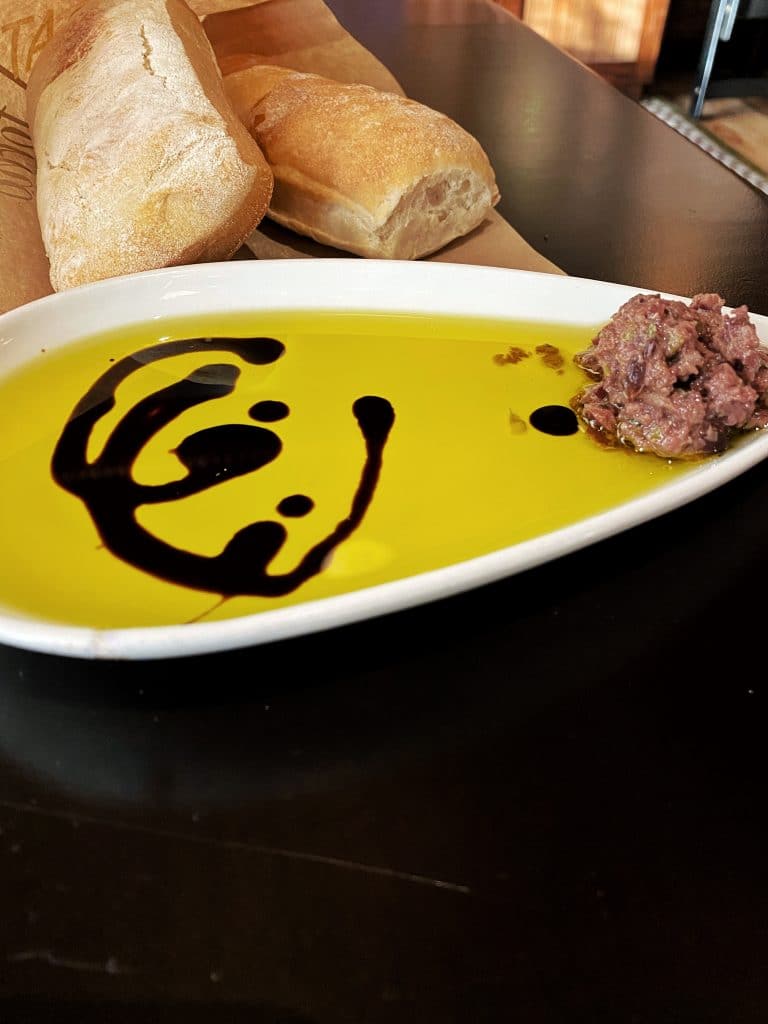 Additionally, in the past Trattoria al Forno has offered an off-menu garlic bread option with “Vegan Garlic Knots.” These are still available, but must be specially made, so be sure to order them first if you’d like to enjoy them before your meal. 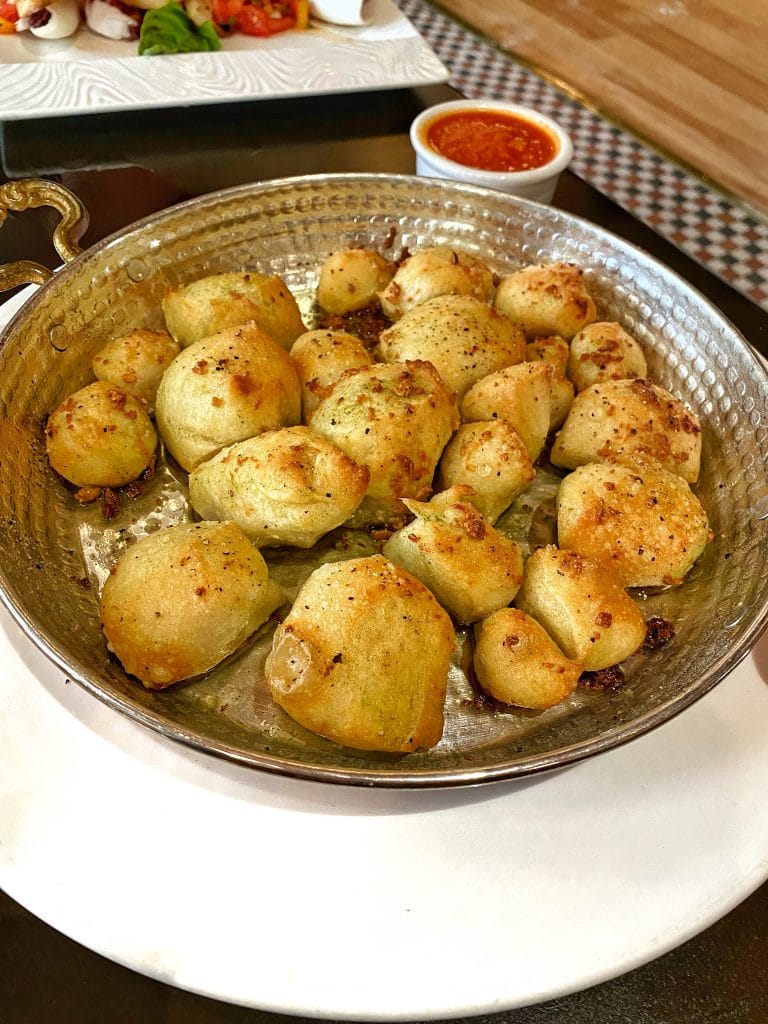 Personally, these were one of my favorite parts of the meal, but I do love bread…and garlic…a lot. The little balls of dough were light and fluffy. They were also crispy on the bottom, as they are cooked in the oven on a pan in olive oil and garlic. So good. We’ve had them as blobs of dough, and traditional knots, and both are delicious. 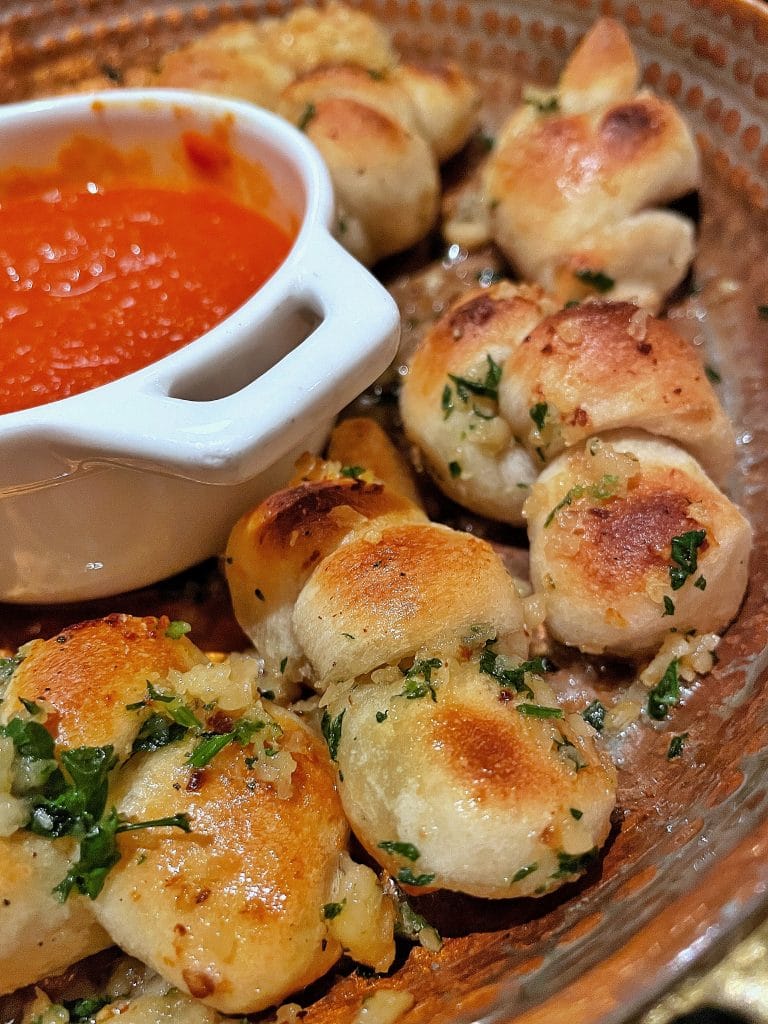 With this new menu, we have a completely vegan appetizer option – the plant-based Roma Tomato Bruschetta. 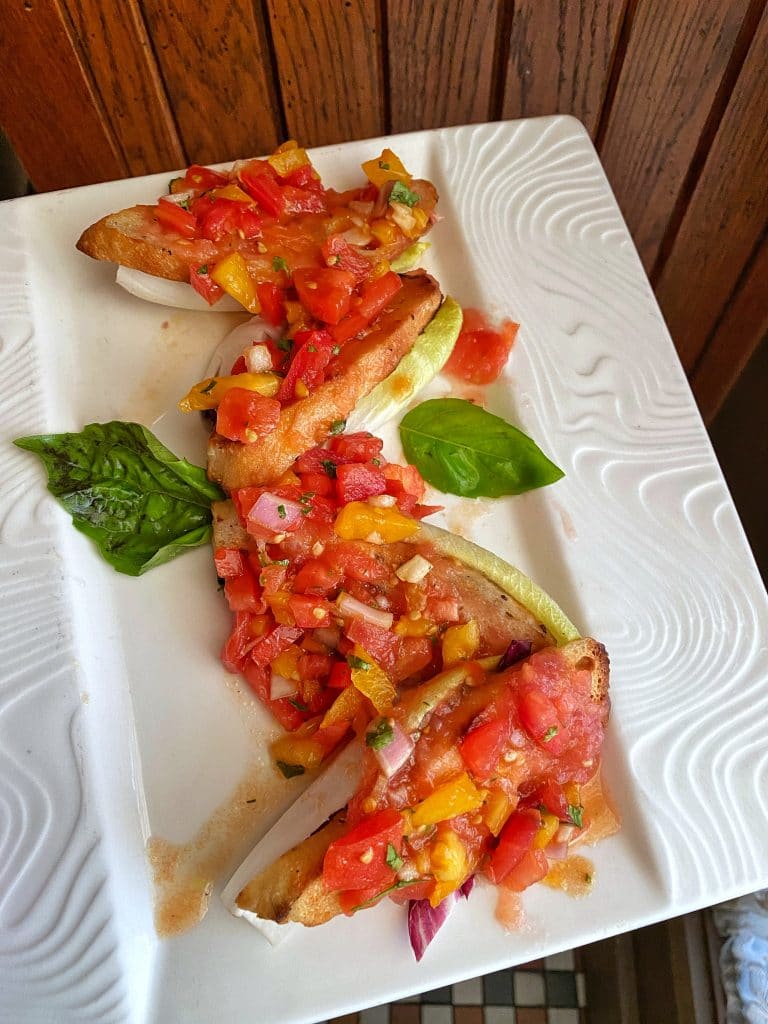 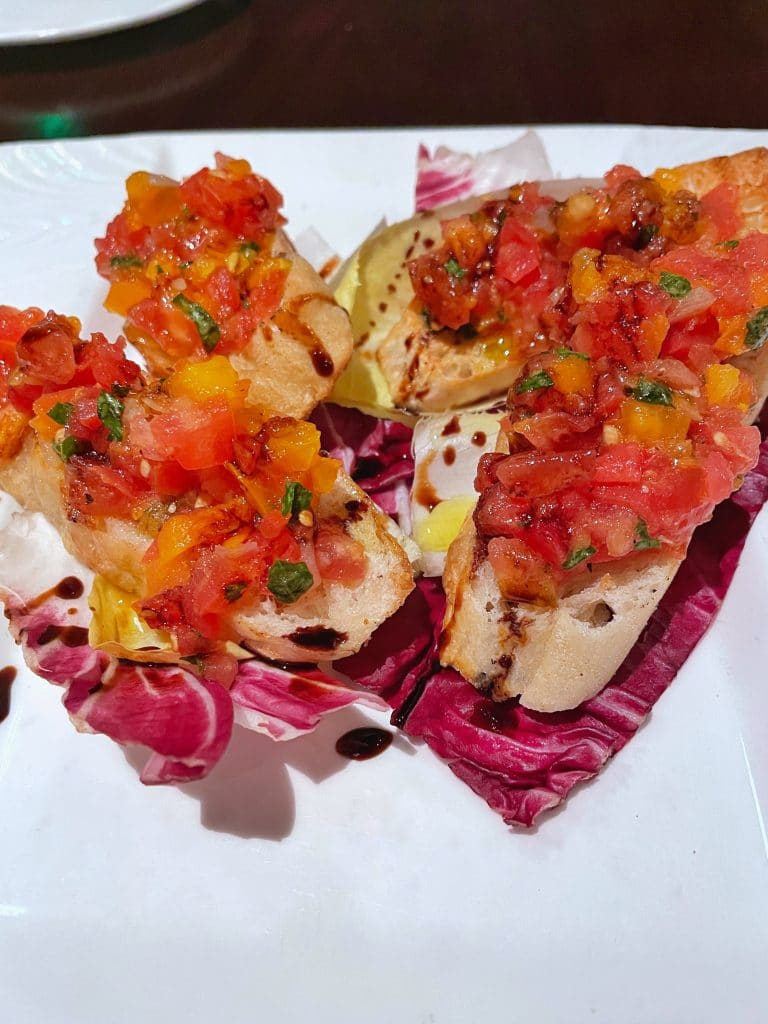 My thoughts on the bruschetta are: stick with the garlic knots. The fresh tomatoes are delicious, but the bread they are on is so thin and the tomato mixture is so liquid-y, that the bread is instantly soggy and stale in texture. It was kind of disappointing because the other breads we had were so good. Unless you are a huge fresh chopped tomato fan, I’d skip this one. Update: We tried this again in February of 2022, and it was top notch. I think it really depends on the liquid level of the bruschetta mix they are putting on top, and how long it sits before you bite into it. Our bread most recently was crispy and delicious.

Also accidentally vegan on the Trattoria al Forno appetizer menu is the Minestrone soup. UPDATE: this is no longer accidentally vegan. They changed their recipe to start with a “Parmesan broth” base, which is unfortunate. However, we asked and were told the chef can still make a vegan version on request, since the pasta and veggies are vegan. See below for a new photo. 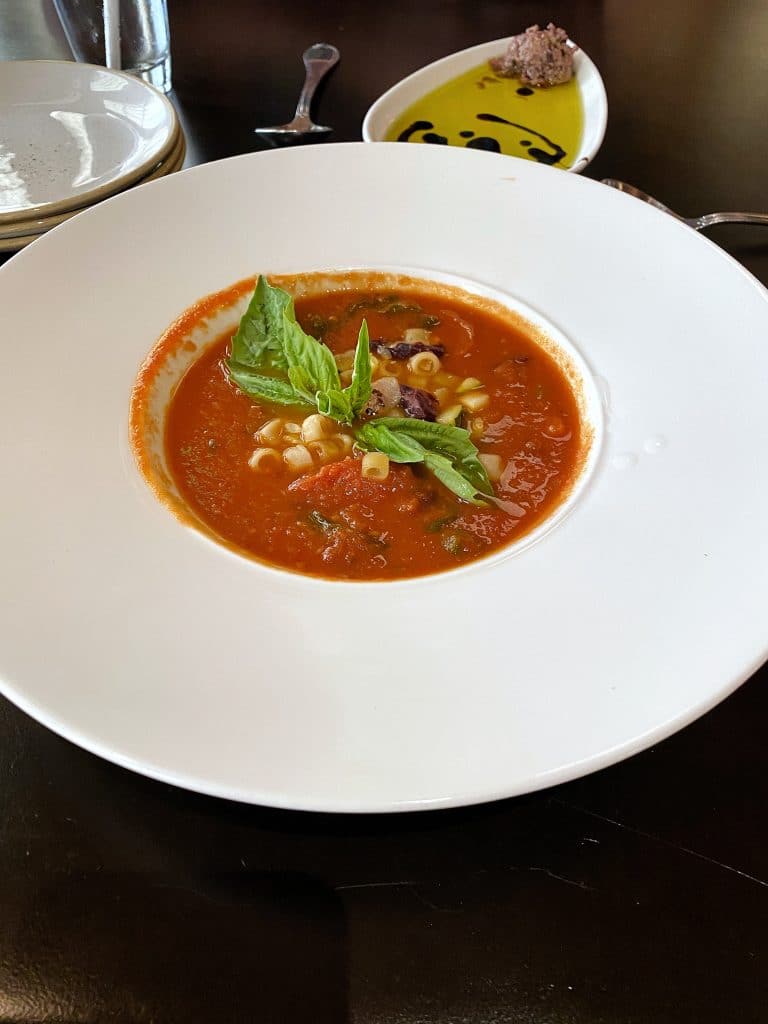 Original Review: This was actually delicious and bursting with flavor. I would definitely get this again in an instant. A much better option than the bruschetta in my opinion. 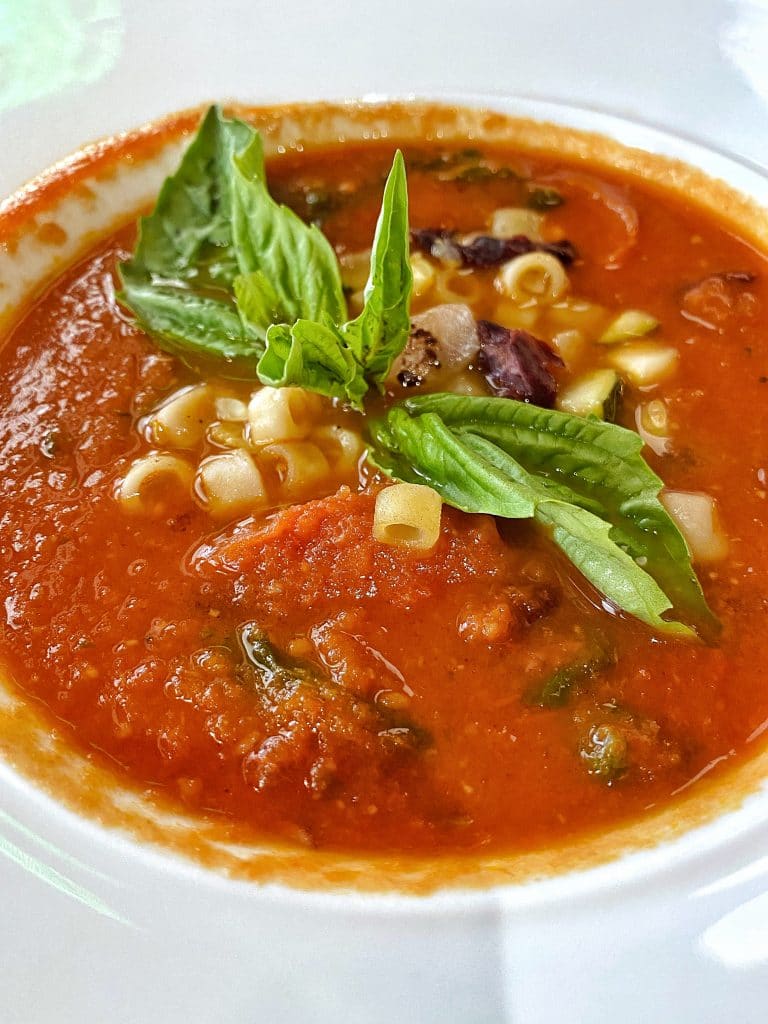 Below is the new version, ordered February, 2022. You can immediately see the difference because as any good cook knows, with soups, the longer they simmer, the better they are. This one was made in about 10-15 mins, and basically just tasted like thinned marinara sauce. The rich flavors from the original version were gone. While I appreciate the accommodation from the chef and their willingness to make a vegan version, it just doesn’t live up to the previous version. So if you really love soup, it’s an option, but I wouldn’t bother ordering this again otherwise. 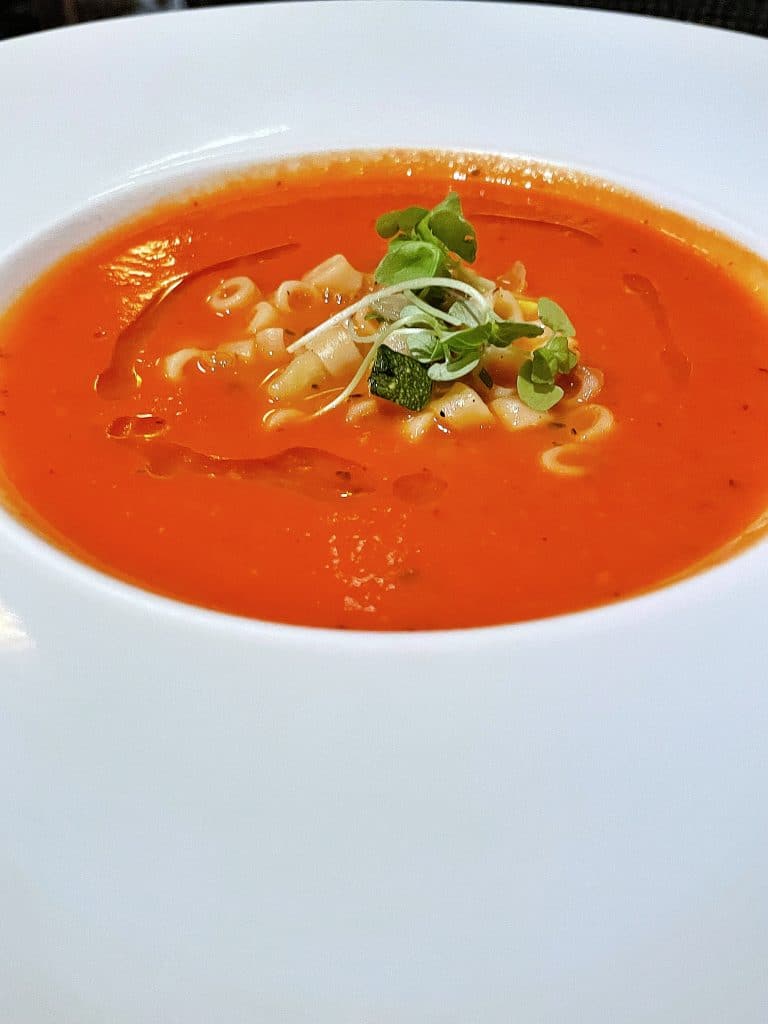 There is also a modifiable salad that can be made vegan. It comes with dairy as is on the menu, but we spoke with the chef and he let us know removing the gorgonzola does make it vegan. He also let us know that any time we visit, we should definitely ask to speak to a chef and they can modify things or create something new for us, which is great to hear. We did not order the item below, but good to know it exists.

The main reason we visited was to try out this new vegan entrée at Trattoria al Forno. The Plant-based Rigatoni Bolognese is a perfect fit for this rustic Italian restaurant. The ragù of tomato sauce, plant-based sausage and mushrooms is braised for hours and served with al dente rigatoni. 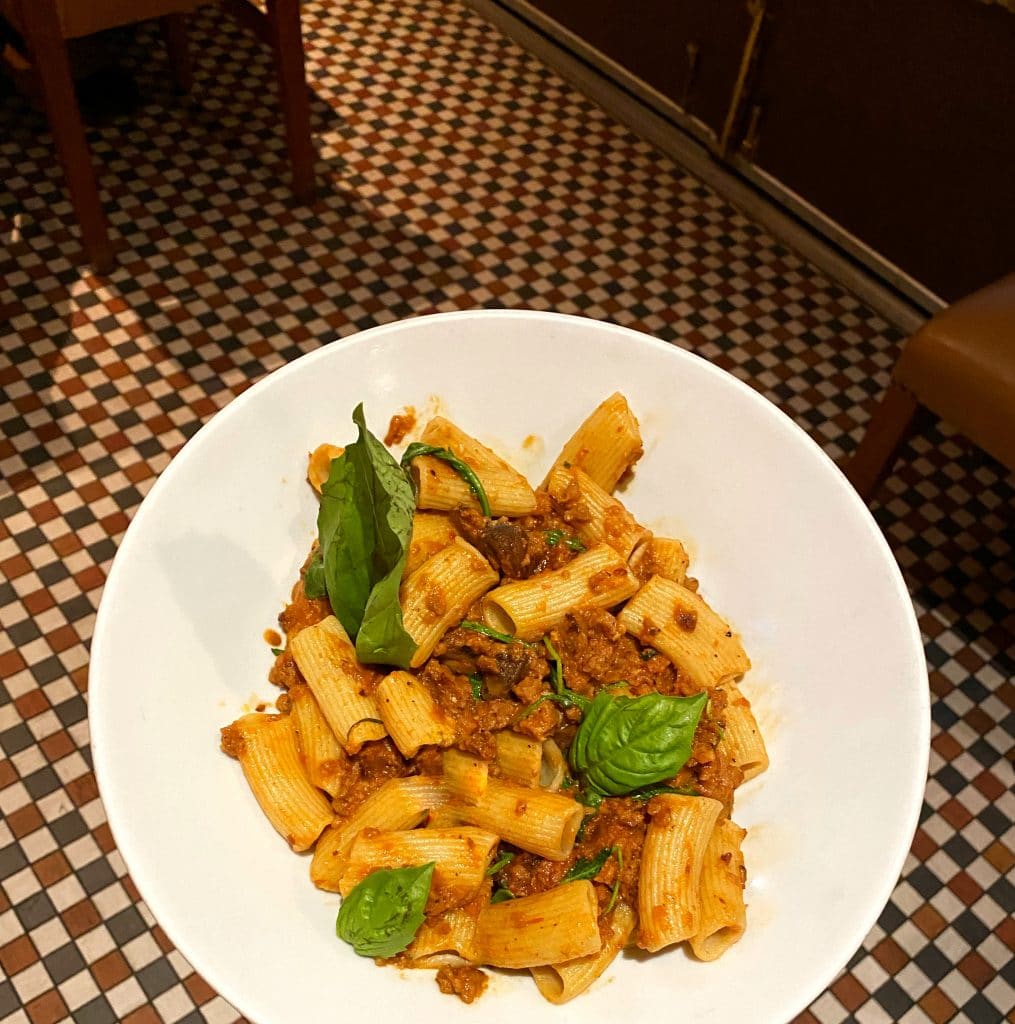 The dish is topped off with some fresh basil leaves for a fresh finish. I loved this dish. It was very hearty and if you are missing being able to order Bolognese and have it be vegan, this may be the dish for you. The tomato sauce is composed of plant-based “beef” crumbles, Field Roast brand sausage (sliced very thin so it doesn’t overpower the dish), and mushrooms. 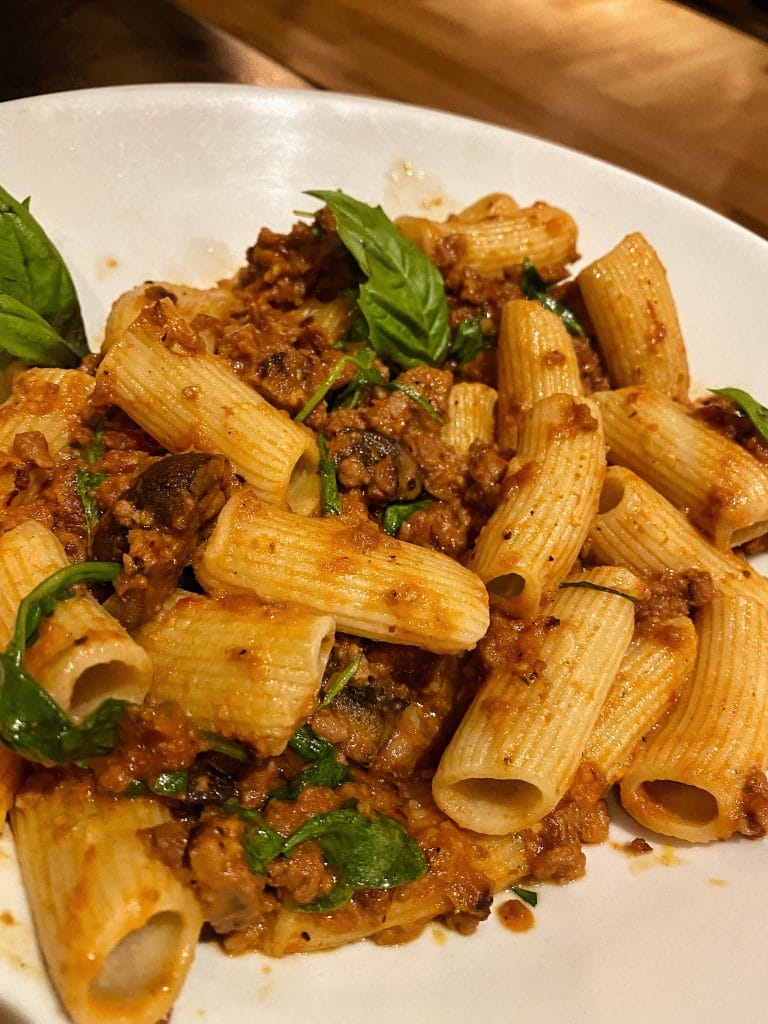 I think this is a great option for those wanting a traditional Italian entrée but vegan. The flavors and texture were wonderful and I really enjoyed it. 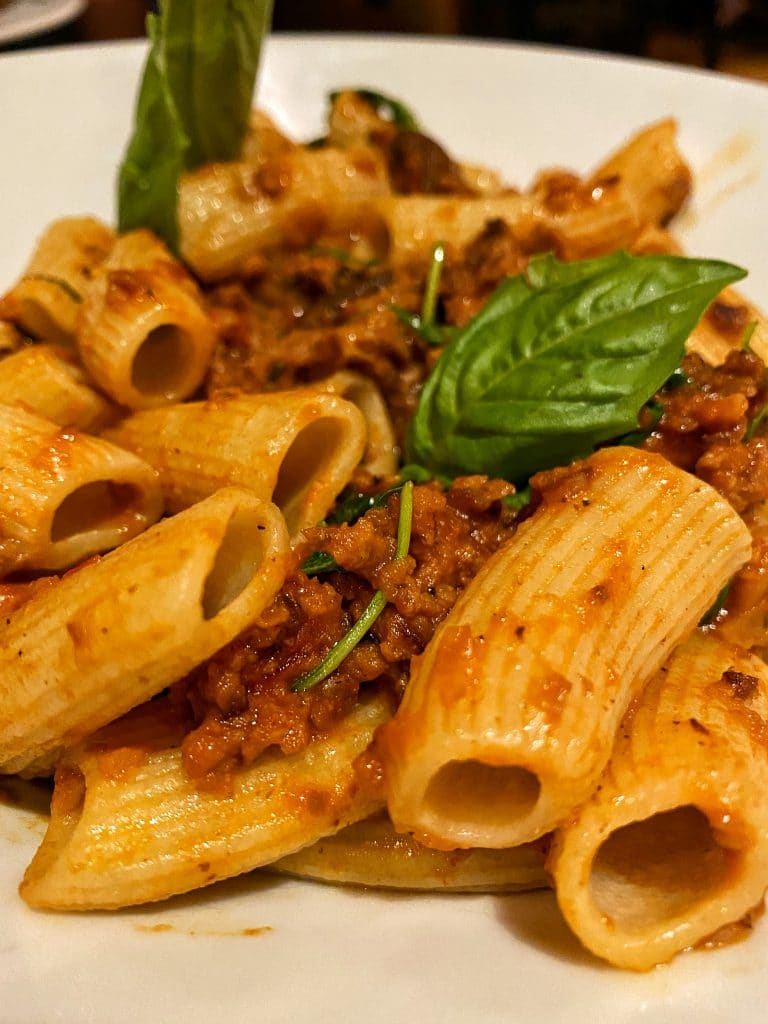 Here are some updated photos from our recent visit in February of 2022. Whole cherry tomatoes have been added and the basil was switched for arugula, which I think may be a supply issue because our bruschetta didn’t have any basil either and that’s noted in the menu description as being on the dish. It was just as delicious though and the little tomatoes just burst in your mouth. This dish remains a favorite among vegan offerings at Walt Disney World.

If faux meat is not your thing, you can also order a pasta with vegetables which they can make a white wine sauce for – and we’ve covered that White Wine Vegetable Pasta at Trattoria al Forno. The server let us know they can do any sort of sauce for us if we have a specific request. The vegetables may vary depending on what’s in season.

The plant-based dessert menu item has not changed at Trattoria al Forno. The Affogato al Caffè features coconut milk ice cream, chocolate drizzle and a shot of espresso to pour over it. 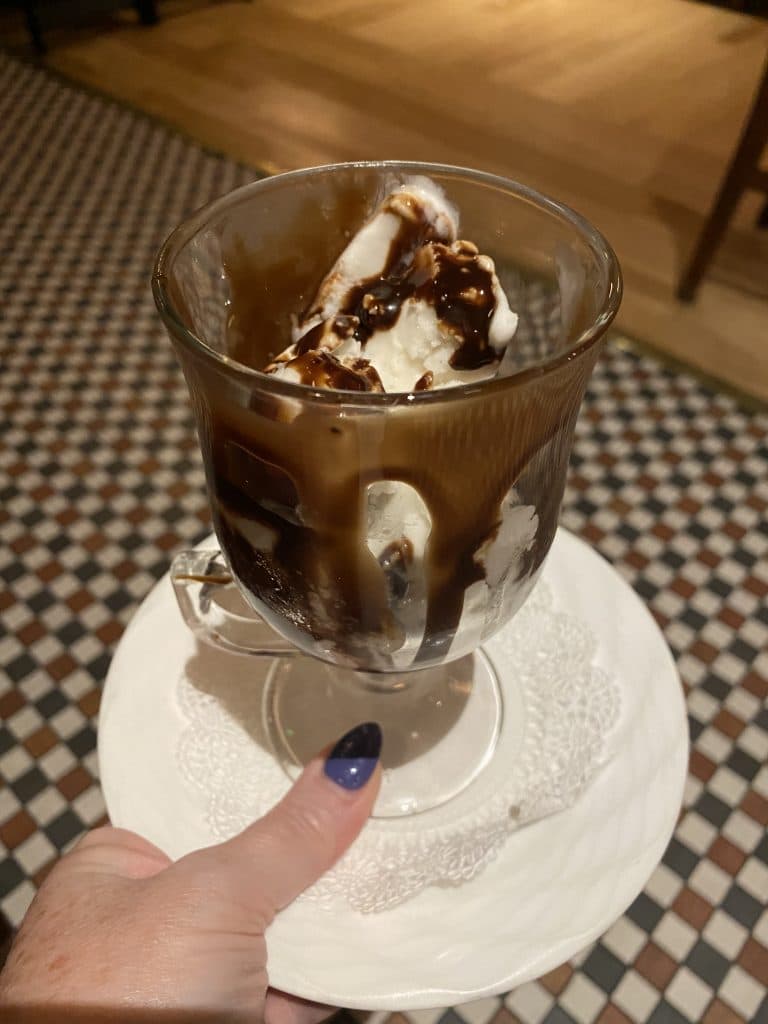 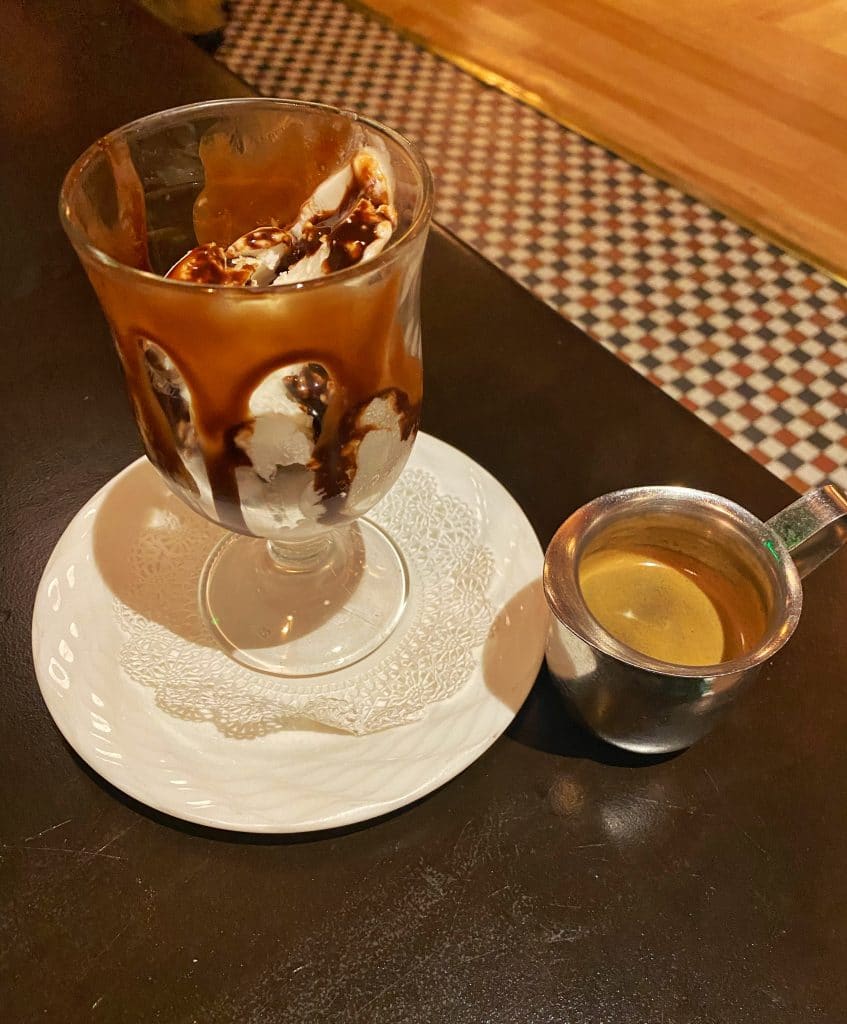 Frozen Coconut-Vanilla Bean Milk, Chocolate-Hazelnut Ribbons, Amaretti Cookies
So, I’m not sure if we just got the end of the ice cream container or what with this, or they weren’t prepared to have anyone order this dessert, but this is how it was brought out to us, with no amaretti cookies. I actually didn’t even realize it till I went to look at the menu later. I’m not sure if the “chocolate hazelnut ribbons” were supposed to be different, this just seemed like chocolate syrup to me, but I didn’t taste it before adding the coffee, so I can’t be sure. Personally, I love coffee. Anyone who knows me knows I’m obsessed, but to me, this was too much coffee. 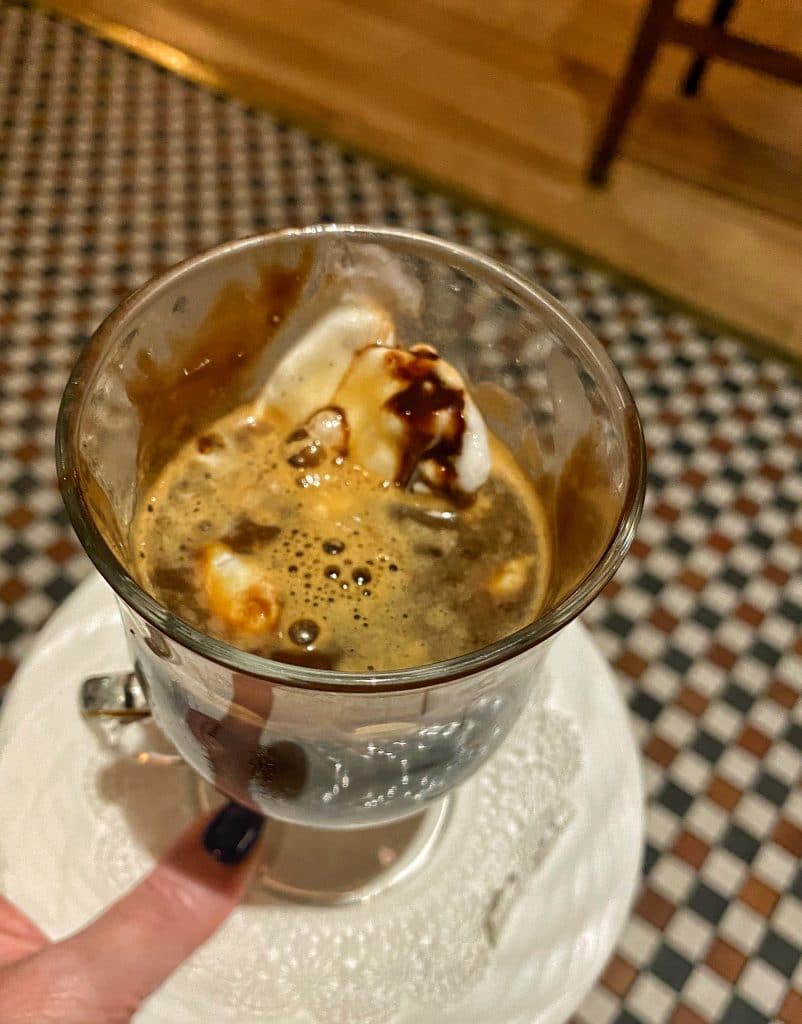 Once I poured the espresso over the top, the ice cream was almost completely melted. I understand this is what happens when you pour a hot liquid over a cold substance. I also understand what affogato is, so I knew it would be a coffee-focused dessert. However, I think maybe the ratio was off here. Immediately after pouring, I just had cold coffee (which again I love) with two tiny dollops of ice cream left. It was pretty unsatisfying as a dessert option. Again, not sure if this is how it normally comes or what. I’ll be updating this post tonight, as my friend is dining there tonight. 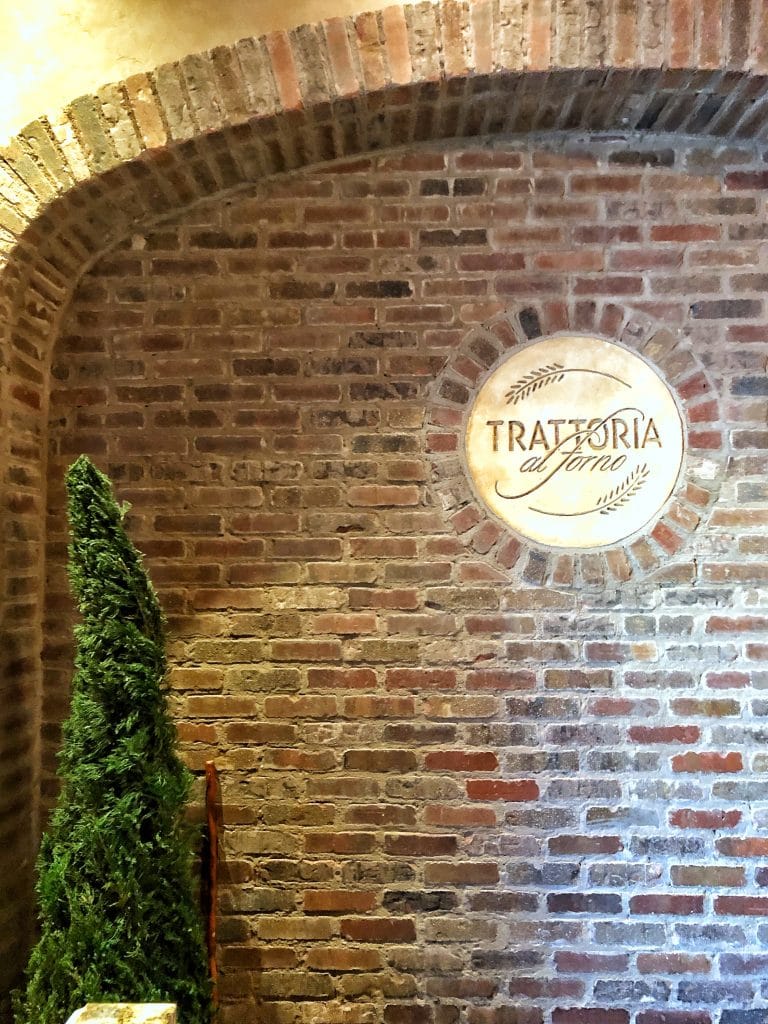 I’m not going to let the dessert letdown ruin my overall review, I’m super glad there is an option for a vegan dessert at all. The rest of the meal was wonderful and aside from the soup, I’d order it all again. I’m still thinking about those garlic knots!

Let us know if you’ve tried these new items or the existing vegan menu options at Trattoria al Forno in the comments below or by tagging us on your #VeganDisneyFood photos.