The Sci-fi Dine-in Theater has always been one of my absolute favorite spots in Walt Disney World – and now they have an updated vegan menu. For those new to visiting Walt Disney World, Disney’s Hollywood Studios was once a tribute to the “Hollywood that never was and always will be.” The front of the park (still) pays homage to old Hollywood with neon and art deco, while the rest of the park offered a behind-the-scenes look at movie-making with the backlot tour and soundstages. Sci-fi Dine-in Theater offered a fun look at the drive-in movie craze of the 1950’s, letting guests dine in “cars” while watching old sci-fi B-movie clips and news stories of the day. For those who have been there often (like my family) we have the clips memorized and will often recite the lines as they happen. 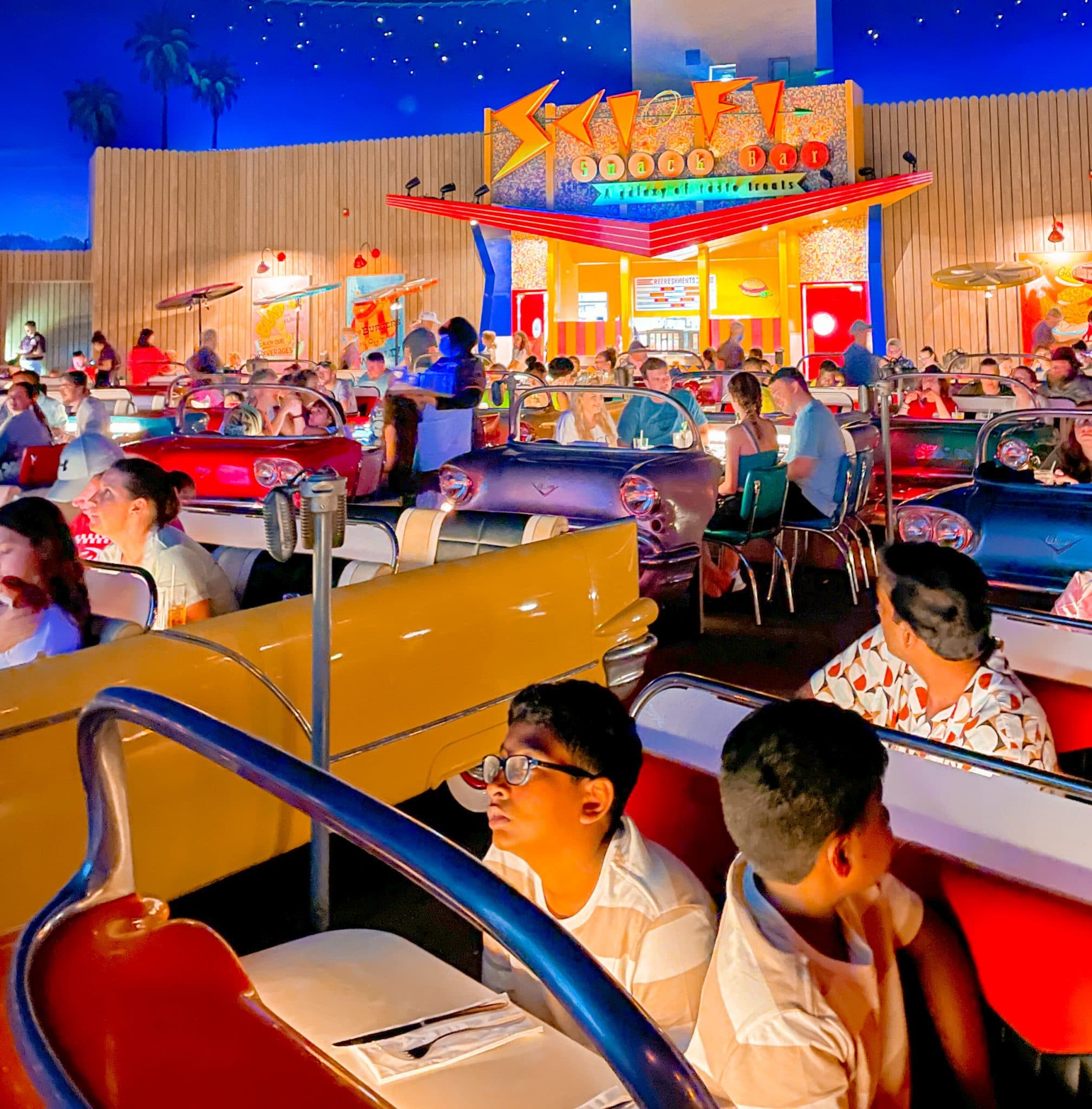 The atmosphere features a night sky complete with stars no matter what time of day you dine. The restaurant originally had servers on roller-skates, but those seem to have been retired these days. Outside of that change, not much else has been updated over the years, making it a wonderful spot for some original Disney-MGM Studios nostalgia. Since it was originally part of the “behind-the-scenes” Studios design, the approach to your table shows the wooden structure of the drive-in, with some movie props thrown in and fun posters too, so make sure you take a look around and explore during your visit. Now lets get to the vegan options! 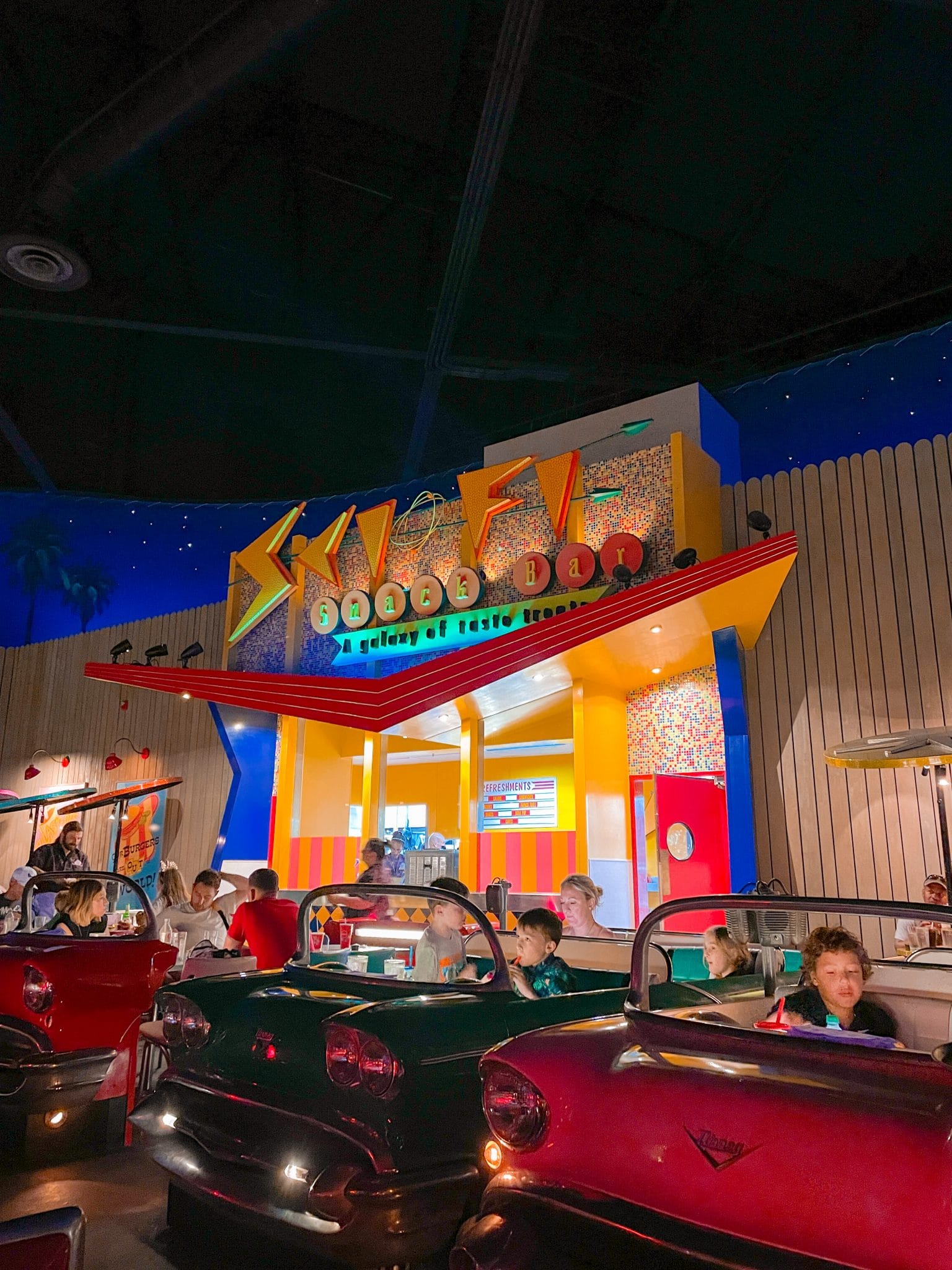 Sci-fi Dine-in Theater has had some menu changes over the years, offering tofu lettuce cups and an island “crab” cake appetizer in the past. Many Disney restaurants have moved to offering an Impossible burger as their vegan option, but with table service locations, they do try to dress it up a little. As of June 2022, Sci-fi now offers a new completely vegan spinach artichoke dip, which is, yes, I’m going to say it, out of this world. (Let me note that as you can see above, lighting is not ideal for food photos in Sci-fi, so I did my best with an assist from my daughter for some extra lighting.) 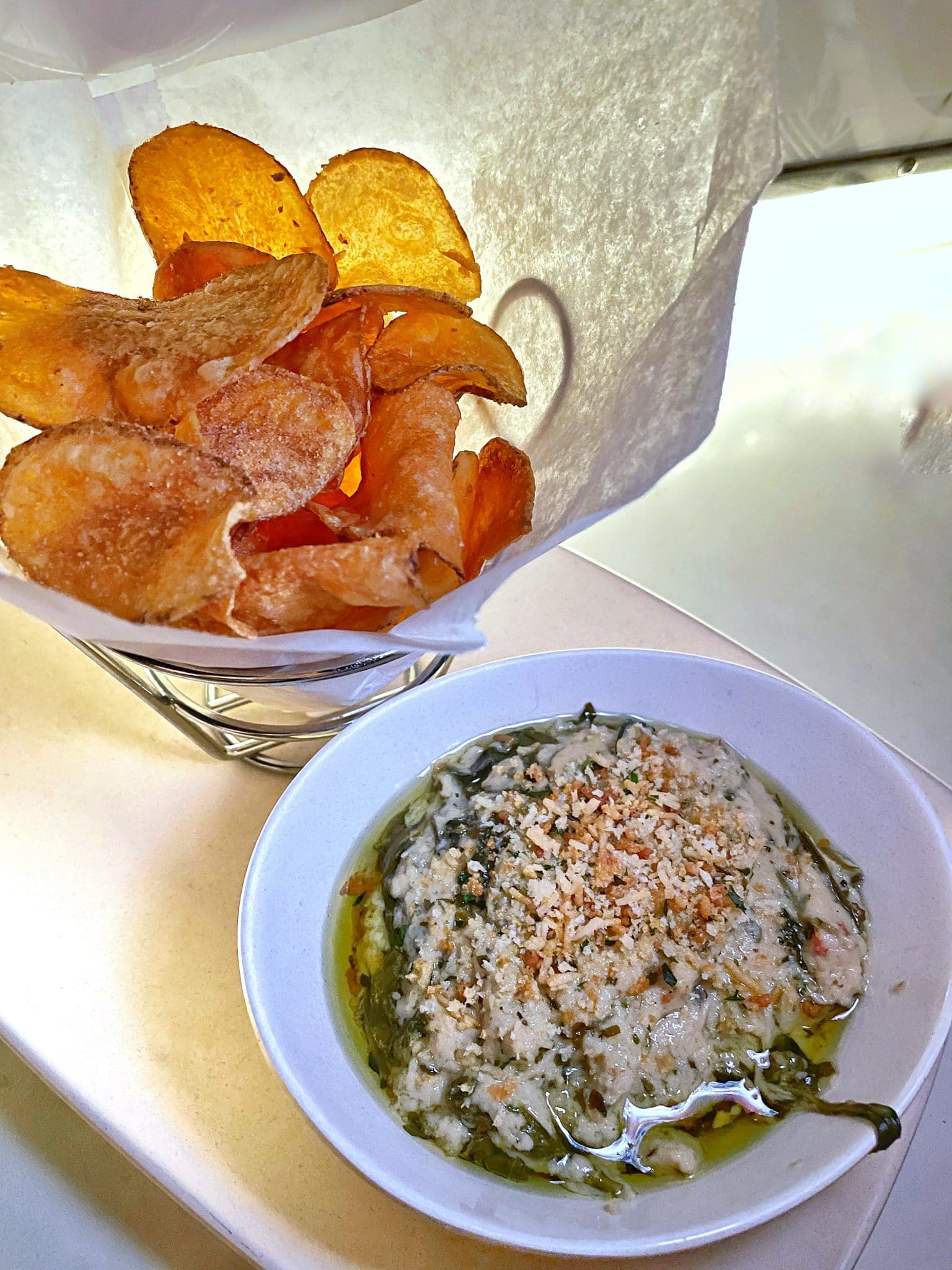 The Spinach Artichoke Dip – $13 is a blend of spinach, artichoke, red peppers, cauliflower, cashew cheese, and oat milk, served with house-made chips. It is completely vegan as is and while it may not be the most photogenic, it is delicious. The flavors are really rich with the artichoke and cauliflower. The chips are also fantastic even on their own, crispy and seasoned. I really enjoyed it and I hope it sticks around – it’s the perfect size for sharing.

Ingredient/Allergy Details: We did some follow-up research based on questions asked on our instagram account, and learned a few more things. The chips for this dish are cooked in a separate dedicated fryer, as are the fries in the burger below. The type of cheese used is Myokos cashew cheese and the oil is canola oil (not sure why they add the oil but they do). This dish CAN be made gluten-free if you request it, and it would remove the panko breadcrumbs on top.

Another reason that I love Sci-fi is it is one of the few places you can get a cherry Coke (or Diet Coke, or soda of your choice, or vanilla too!). Our server was also vegan and confirmed the cherry syrup was vegan. It’s a fun option to get you in the 50’s state of mind. 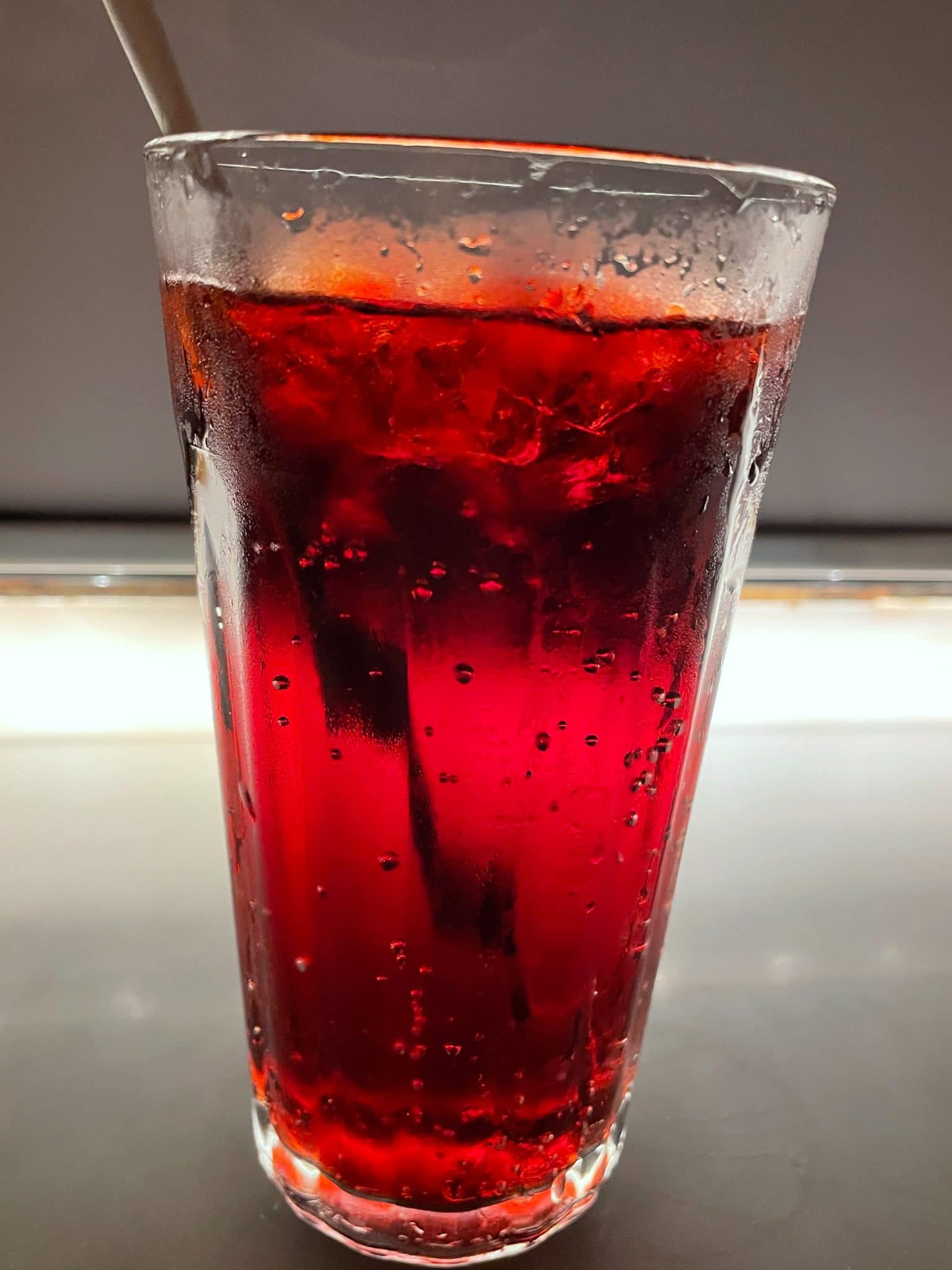 The vegan entrée at Sci-fi Dine-in Theater is the Flying Saucer Impossible Burger – $21. This unique burger features a grilled Impossible burger, grilled Portobello mushroom, cashew mozzarella, garlic-tomato aioli, nut-free (and dairy-free) pesto, lettuce and tomato on a vegan bun. There’s a lot going on, but it works. It’s like a delicious pizza burger. 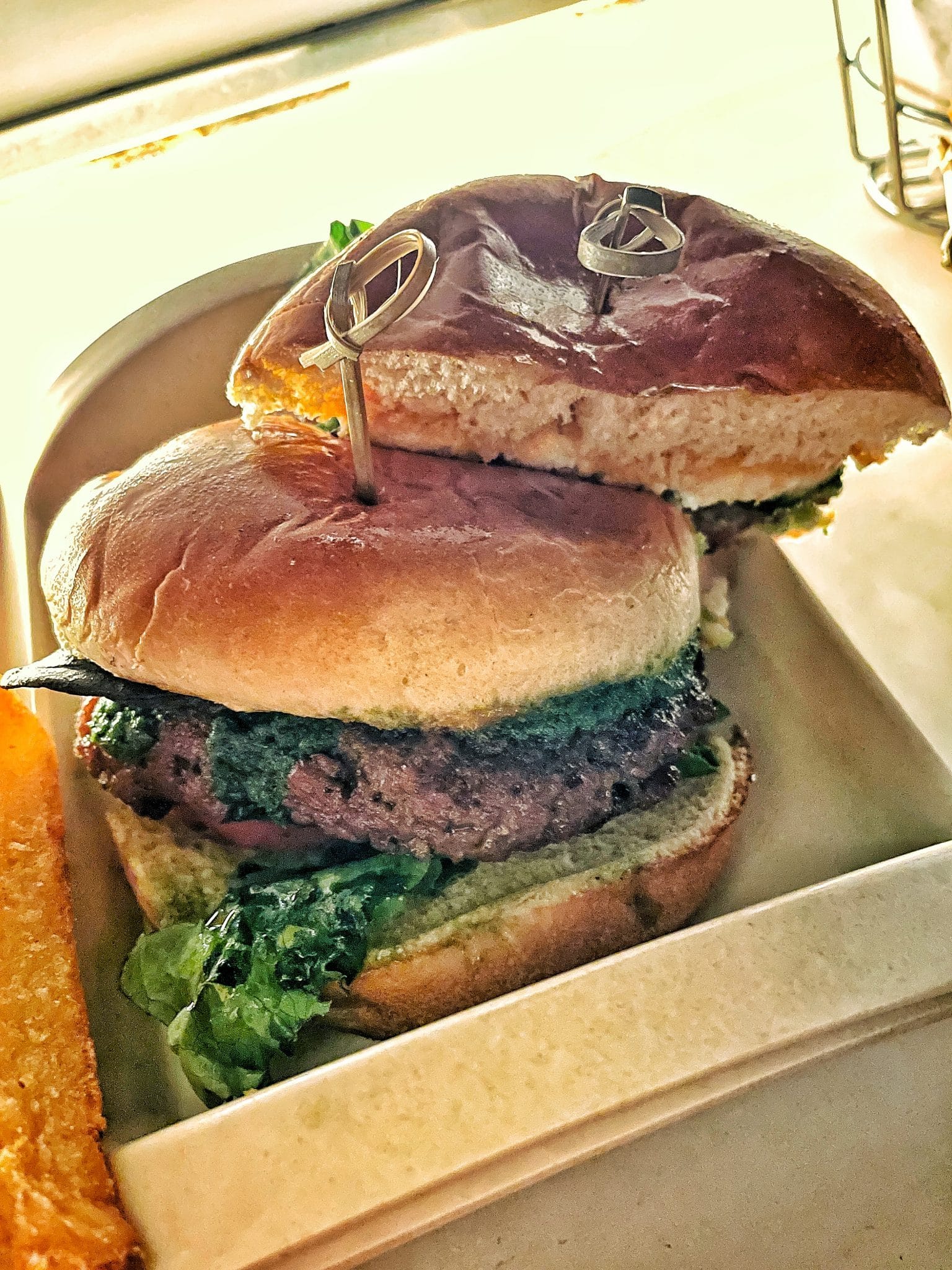 Again, I apologize for the less-than-stellar photo quality here. You’ll have to take my word that it tastes better than it looks. My daughter and I split the burger, so they brought it over already cut in half for us:

Selfie lighting is much better, so I tried to take a burger selfie to show you but it’s a bit blurry. Anyway, as you can see there is a lot going on in there. The pesto was really great and gave that wonderful basil flavor. The cheese was also very well done and a nice complement. If you aren’t a fan of mushrooms you can easily nix the Portobello.

Ingredient/Allergy Details: We spoke with two separate chefs who confirmed the burger is cooked on a separate surface. They have no cross-contamination on any of these vegan items. The fries are cooked in a separate, dedicated fryer. The brand of cheese for the cashew mozzarella is Myokos, and Follow Your Heart brand parmesan is used in the pesto. Gluten-free buns are available on request.

I didn’t get a good shot of the fries (I was taking video so watch for that on our instagram and tiktok accounts soon!) but I have to say they were fried perfection. Perfectly crispy outside with soft potato-y goodness inside. The whole entrée was like an elevated fast-food burger and fries at the drive-in!

Also, I asked if there were any other entrée options and was told they could put together a pasta dish with veggies and marinara sauce.

Make sure you leave room for dessert (or order with your meal) because they have a plant-based milkshake! 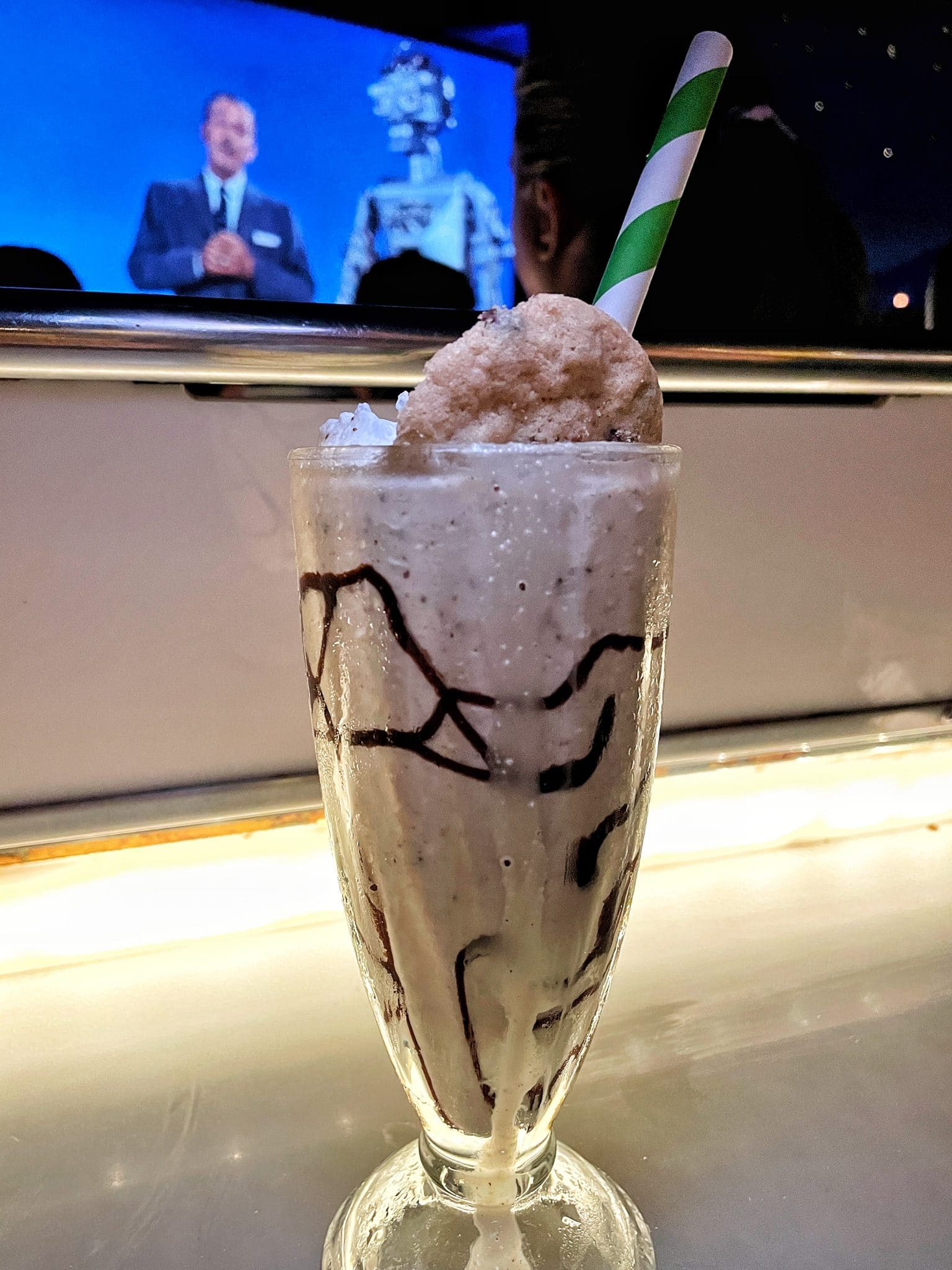 The Cookie Shake – $7 is described as plant-based milk and cookies with coconut whipped cream. This is made with Tofutti frozen dessert and Oreos. This option was good, but not thick like a milkshake, so keep that in mind. Moreover, you can get a chocolate or vanilla Tofutti shake here if you’d prefer.

We also learned that you can order just the shake to go from the host stand if you’d like, which is great to hear since it’s so hard to get a reservation here. Just ask at the host stand and they can bring a server over or take care of it for you. Thi was confirmed by two chefs, so if the hosts do not know about it, I’d ask to speak to a chef or manager (nicely of course!).

In summary, Sci-fi remains a family favorite. The Sci-fi Dine-in Theater excels in atmosphere, plus the vegan options are solid and unique. Have you dined-in at the Sci-fi? Let us know what you think!