The beloved Hoop Dee Doo Musical Review at Disney’s Fort Wilderness Resort and Campground recently reopened after an extended closure, and we’re here to share your vegan options at this classic dinner show. Hoop Dee Doo has gotten a slight makeover with some new arrangements and updates, and the dinner options for vegans did as well. 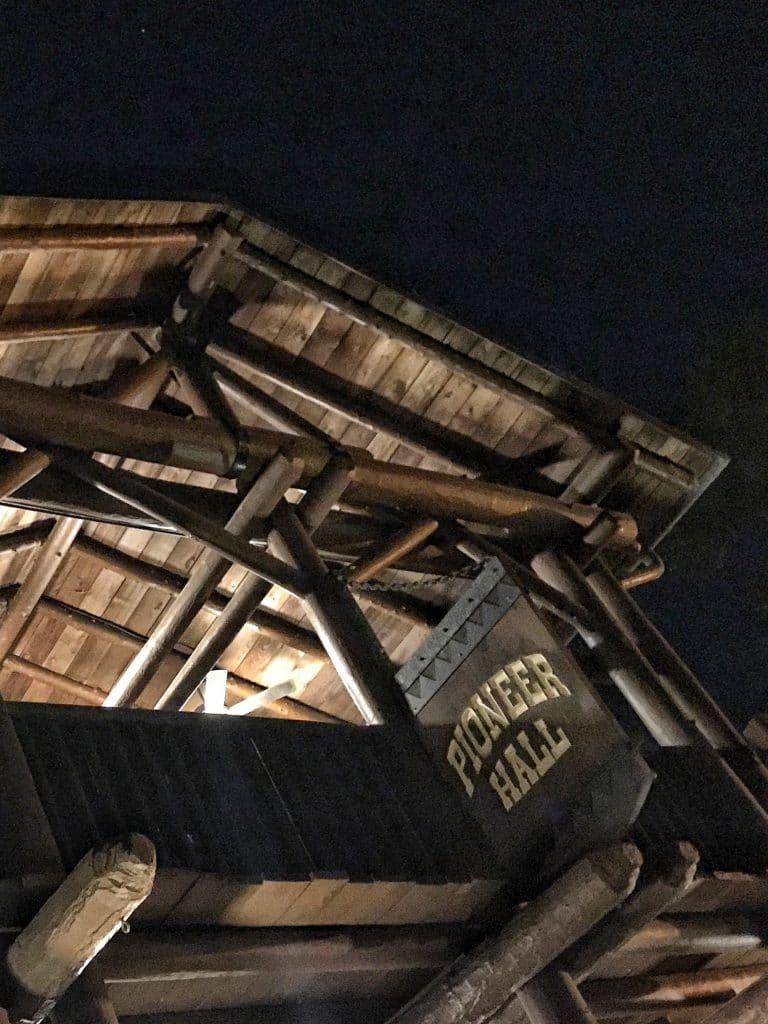 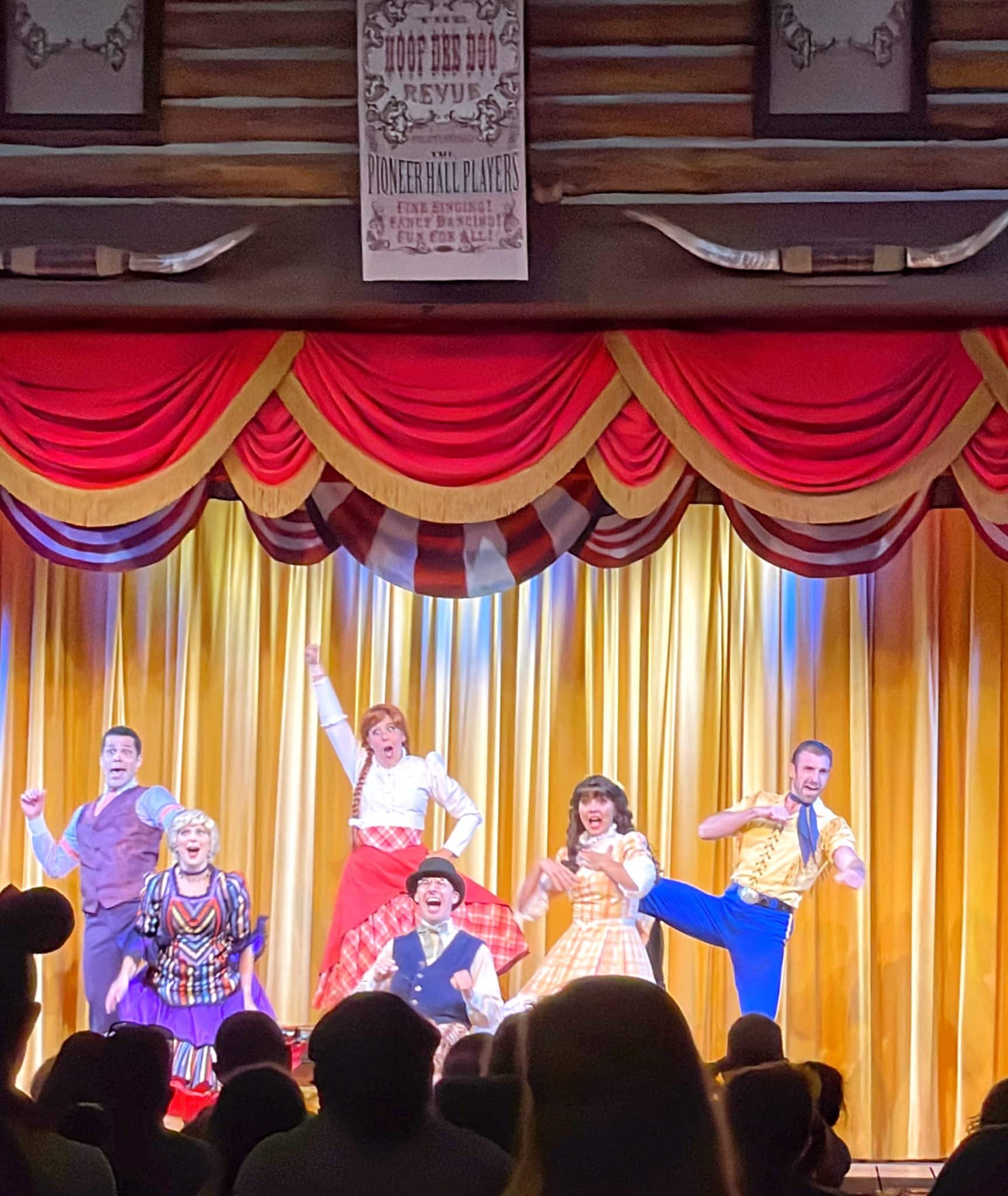 That’s right. This is an audience participation show as well. Watch your back or one of the Pioneer Hall Players might walk straight out into the audience and snatch you up on stage. 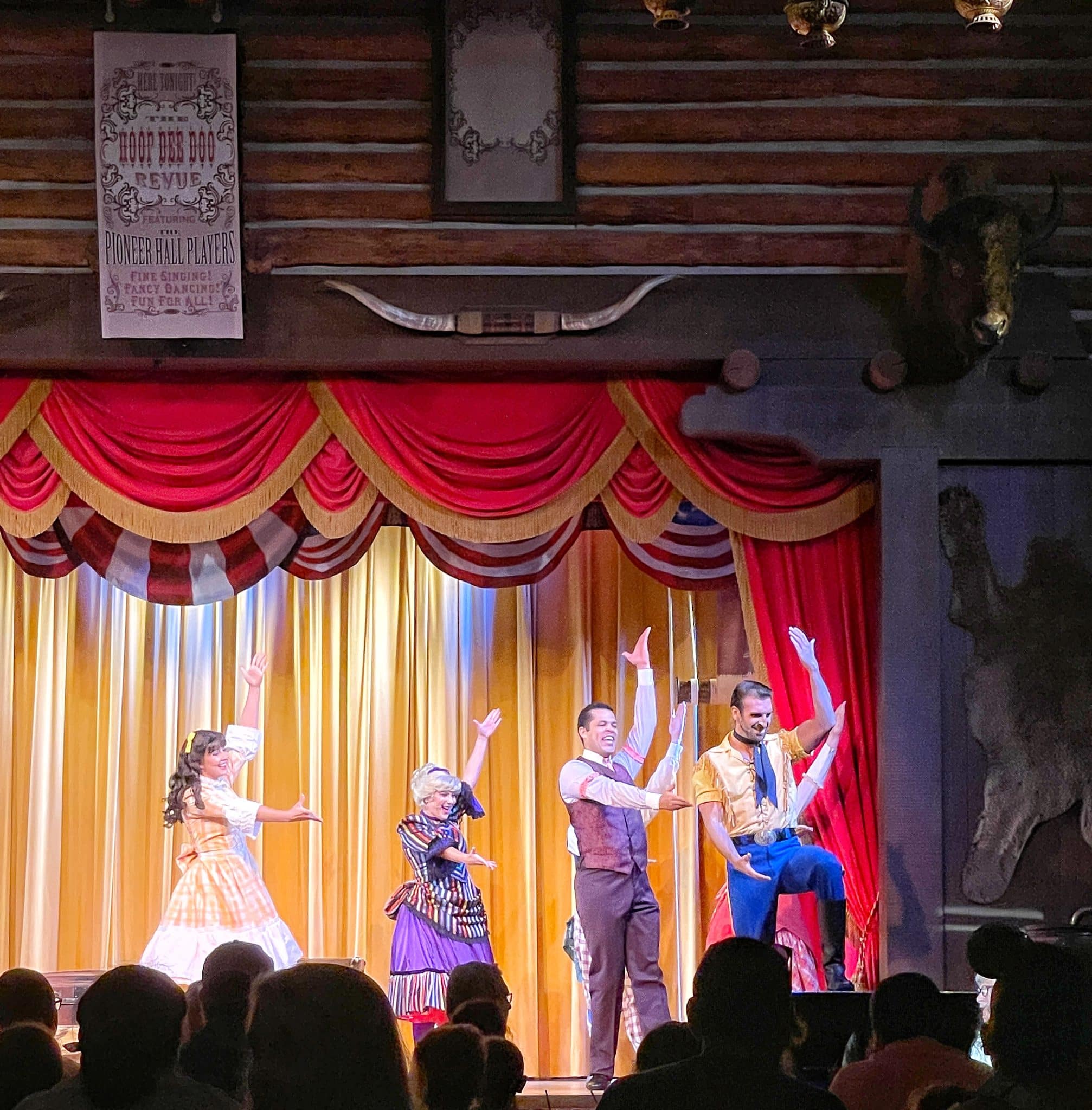 This Wild West dancing, singing and zany vaudeville comedy show transpires over the course of a two hour dinner service.

In between skits and songs, chow down on vegan grub while swilling tea, soda, unlimited draft beer, wine and sangria (white or red). The Opici wine used in the sangria is vegan.

The leaf symbol on the bottom of the Hoop Dee Doo menu that states “Plant-based option available on request” is for us! Just let the hostess know when you check-in, or your server and they will alert the chef. If you need to speak to a chef or have any questions at any time, they can come out and speak to you. 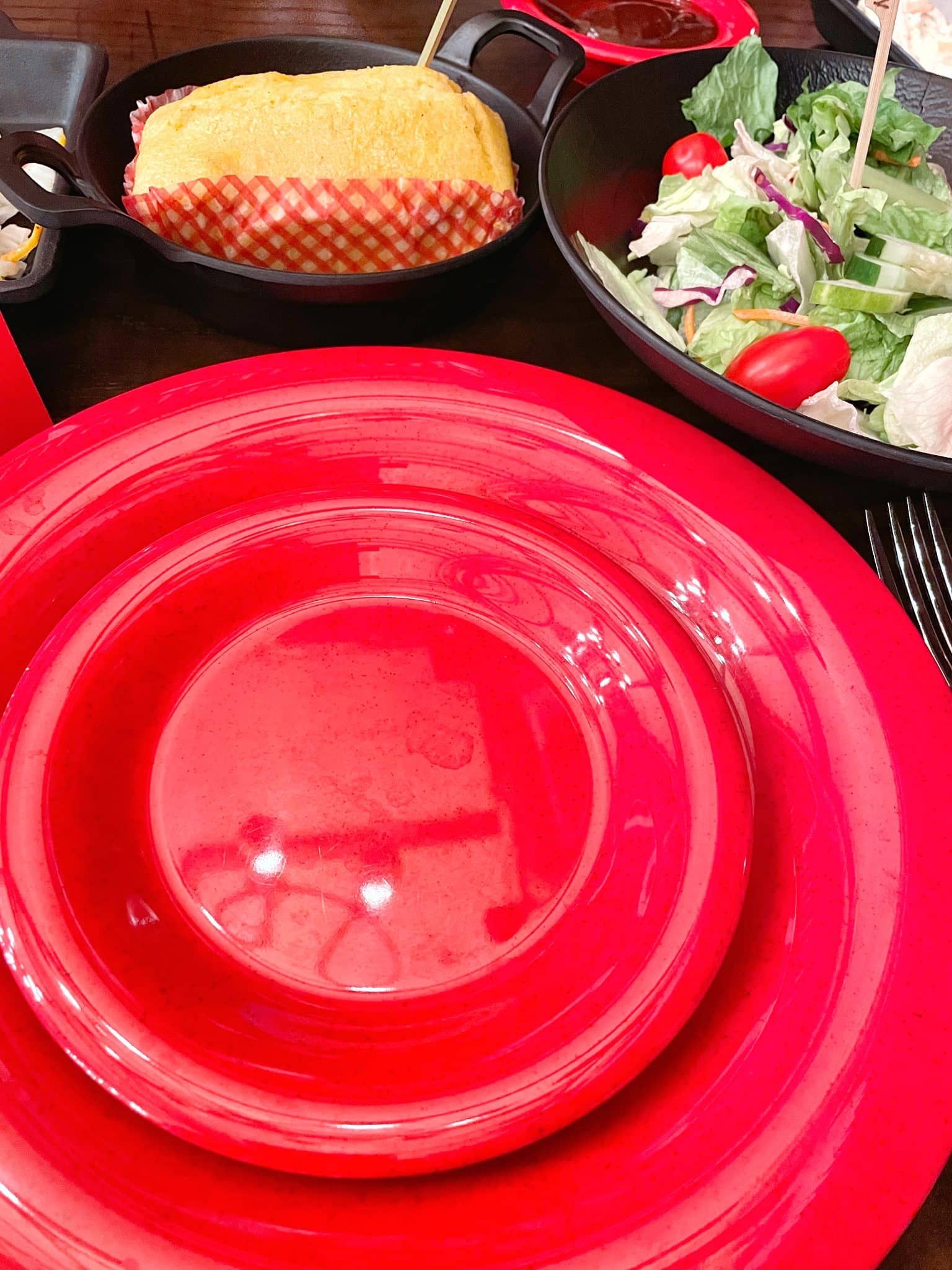 There have been some little updates in the dining room as well. The big, round tables are gone, replaced with rectangular ones, which means they can fit more in the main floor area. Don’t worry about not being able to see, however. They also replaced the chairs with ones that swivel! So no matter where you are facing, you can twirl around and see the show. The classic metal plates have also now been replaced with the red ones you see above. No longer do the servers SLAM the metal bucket of chicken on the table (which I guess is a good thing in our case!).

Dinner starts with bread and salad. For us, that means special vegan and gluten-free cornbread and vegan butter.

The salad is composed of greens, cucumbers and cherry tomatoes and we were given a separate dressing. I asked about what was in the dressing because it tasted like it couldn’t be vegan, and the chef came out and assured me it was totally vegan and was something they made in-house called “Disney vinaigrette.” 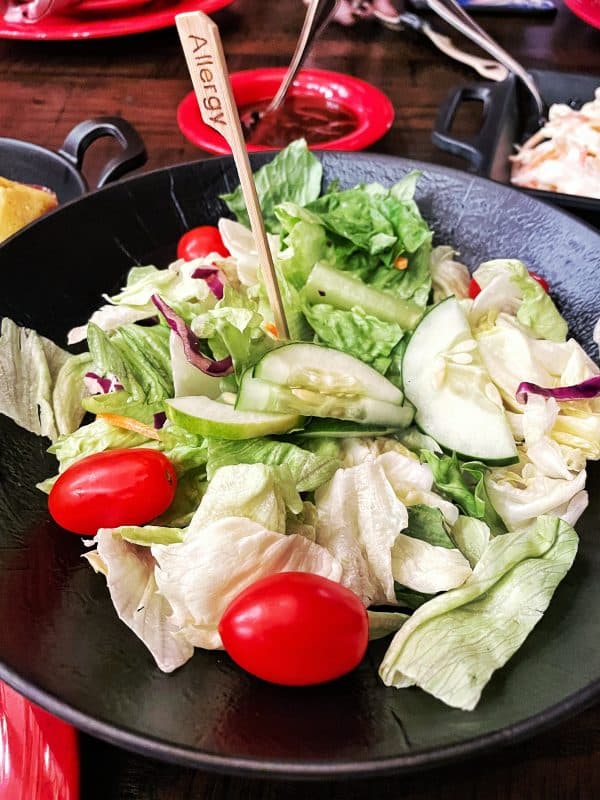 The bread served is a warm and sweet vegan cornbread, which you may know from Trail’s End next-door, or Wilderness Lodge down the street. 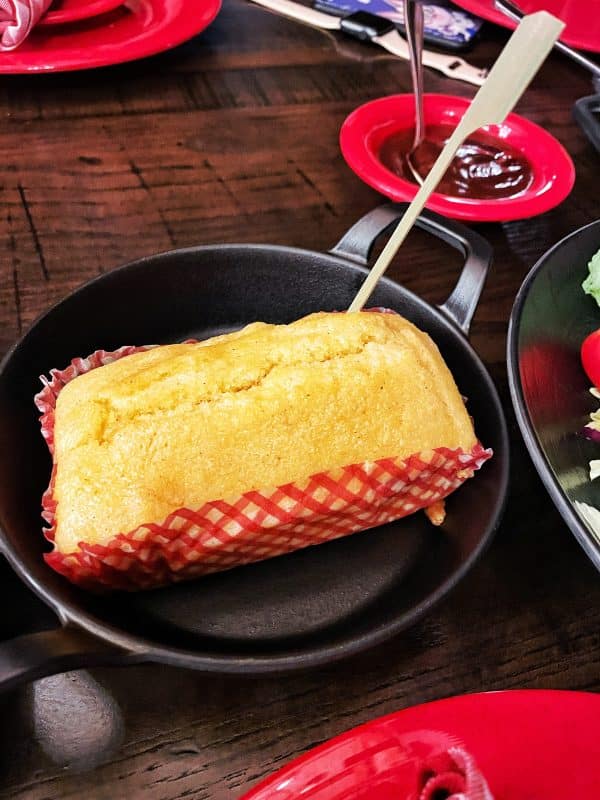 The rest of the table also had cole slaw, and I was shocked to see we had our own version too! It was vinegar based rather than mayo, and was actually really good! Now keep in mind, this is all you care to enjoy, so if you want to fill up on salad and cole slaw, (or entree items) you can! 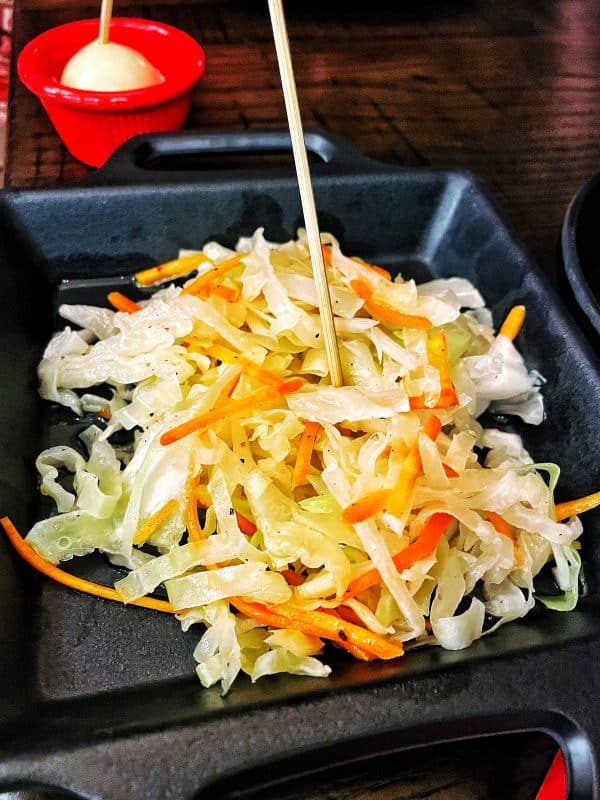 The main entree is a sampler of vegan meats and sides. This could change at any time, as it is quite similar to the options available at Trail’s End next door, which has also had some changes over the last few months. 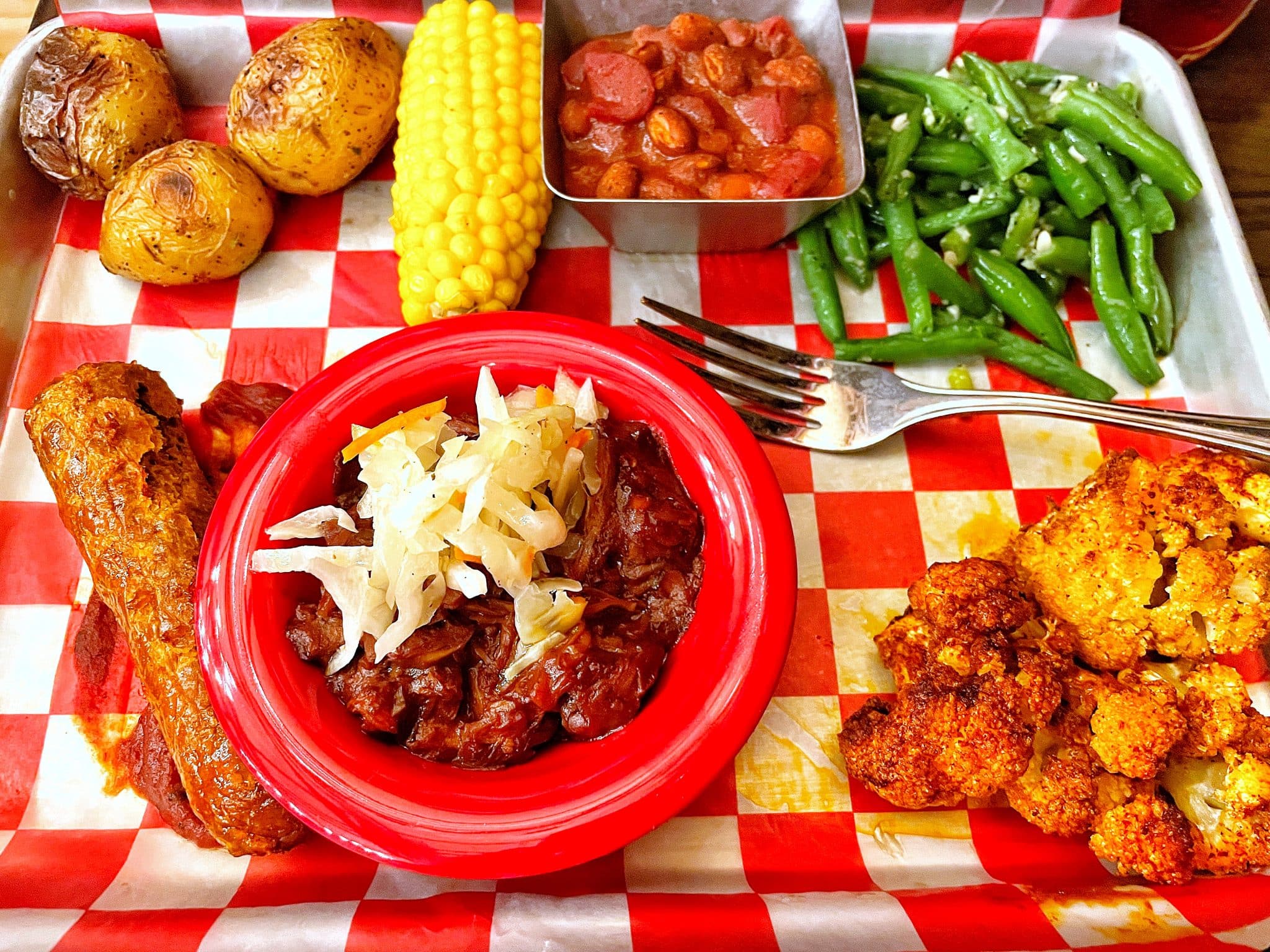 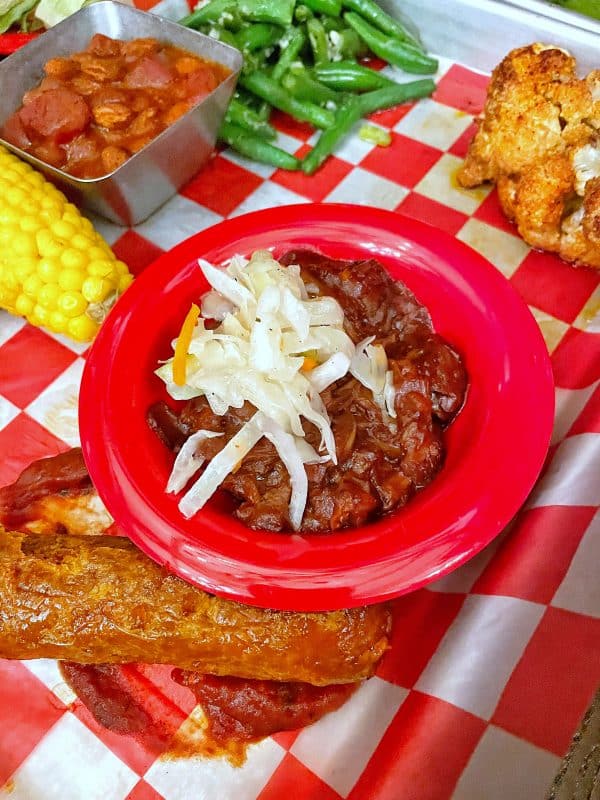 The vegan sausage is a Beyond Italian sausage, which seemed to have been coated in a maple or brown sugar glaze, which goes with the cowboy vittles theme, but not so much with the marinara sauce it’s sitting on, so that was an odd combo.

The jackfruit is not my favorite and I really really wish Disney would learn how to properly cook jackfruit so it doesn’t taste like it just came out of the can. 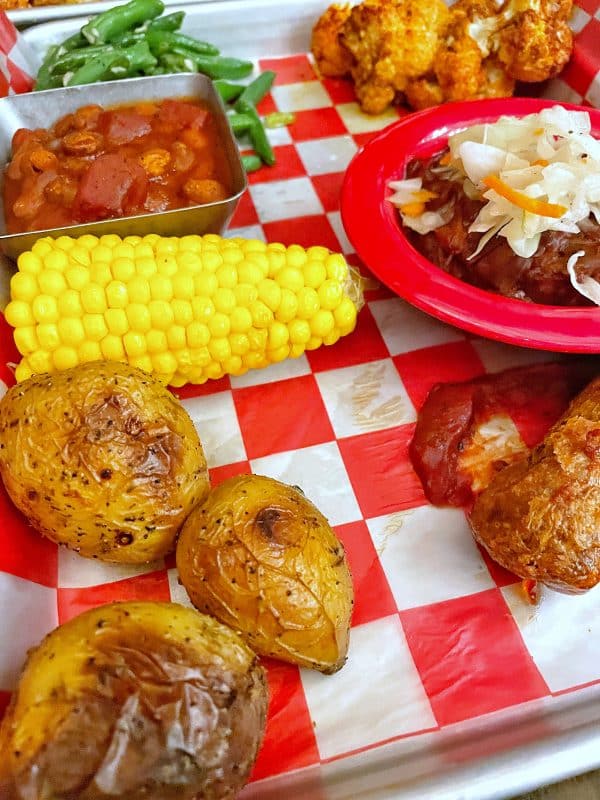 The potatoes were perfectly cooked and nice and soft inside and well-seasoned. The corn was also great as-is. The green beans tasted like they were previously frozen but the garlic helped a little. The baked beans were good, nothing exciting, just baked beans. The cauliflower was seasoned with what seemed like just paprika. I expected them to be buffalo cauliflower based on looks but that was not the case. They were pretty tasteless, which is sad. 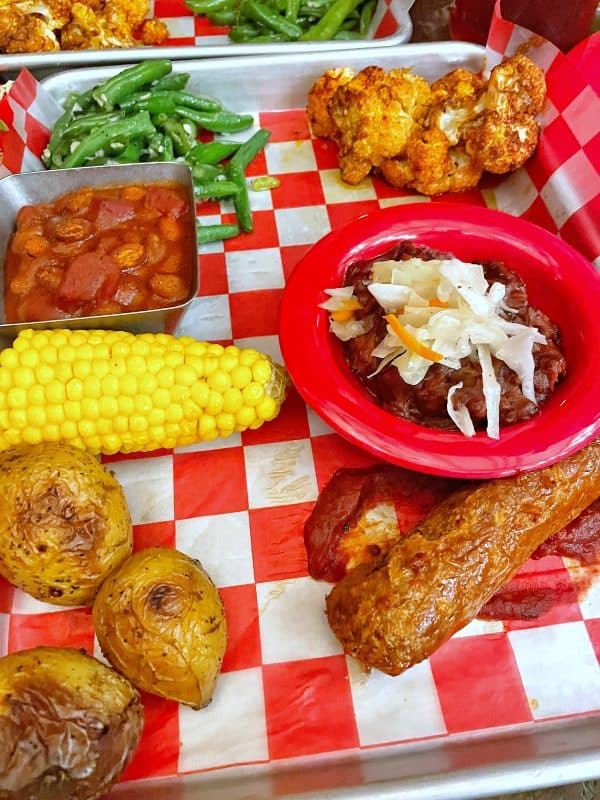 Overall, with mass-produced food like this, it’s never going to be signature dining-level, and it was a lot of food, so I felt like it was worth the money. That said, I do wish they’d think outside the box a little, or at the very least do some taste tests of items and listen to feedback before making these options the norm at so many different places across property.

Note, if you are vegetarian and not vegan, you will have more options with mashed potatoes and mac and cheese. 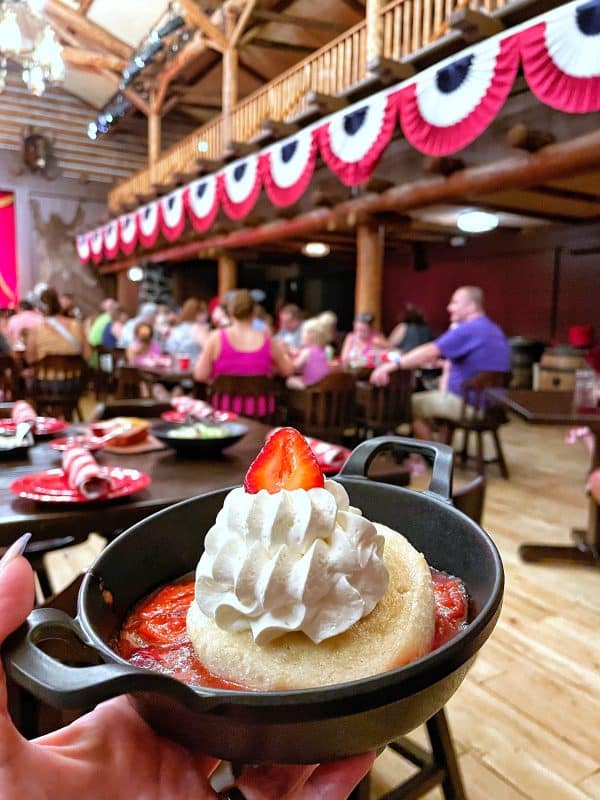 Because the shortcake is also gluten-free, it is not my favorite, but I know Disney is covering themselves with a lot of allergy needs at the same time. My dream is that they could make some vegan baked goods that would be good enough to be served as regular desserts and then they can still have the gluten-free options for those that need those. It’s a big dream, but it’s possible! 😉 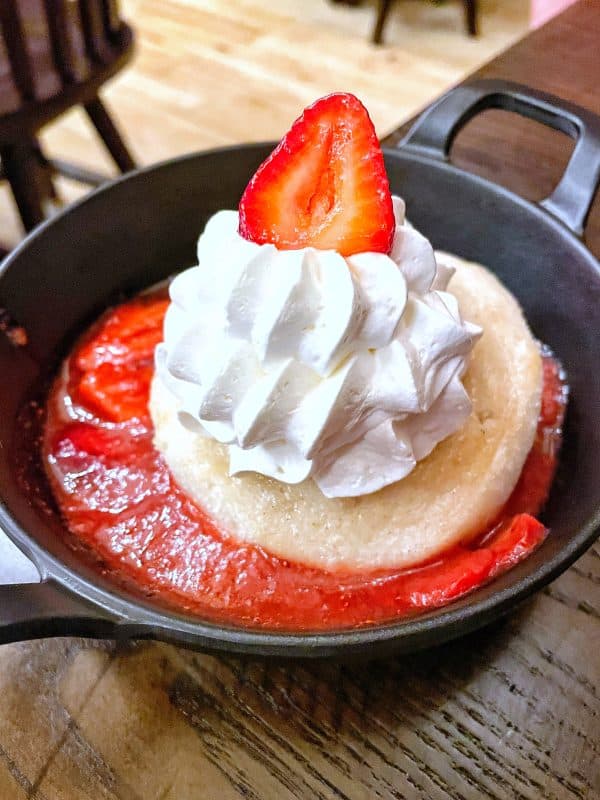 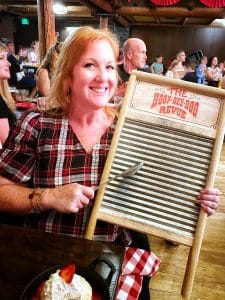 Is Hoop Dee Doo Worth it for Vegans?

Hoop Dee Doo is mostly about the show and the fun of the night and even though the night we visited there was a torrential downpour with hail and we were soaked walking from the bus stop, we had non-stop fun and the entire family enjoyed themselves. Hoop Dee Doo is a beloved classic for a reason. I’m grateful we have vegan options at Hoop Dee Doo, and while I sure wish they were more unique or slightly better in terms of flavor, I still had a great time. It’s definitely not an every-other-weekend kind of experience, but a great way to make some Walt Disney World memories with the family.

The former appetizer available at Hoop Dee Doo can still be found on the bar menu at neighboring Crockett’s Tavern for $9.00. You can see our review here: Vegan Fried Green Tomatoes at Crockett’s Tavern in Walt Disney World. We need to re-confirm that these are still vegan, as we haven’t had them since re-opening, so be sure to ask if you go before we make it out there. 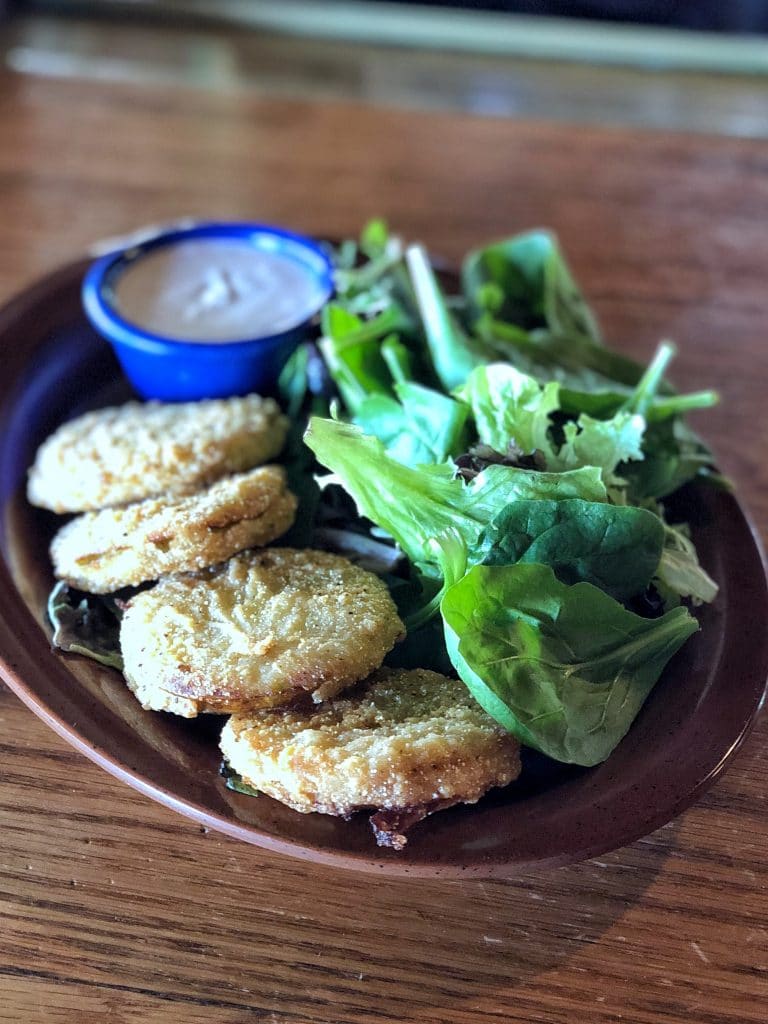 The Hoop Dee Doo Musical Review will run you around $66 – $74 per person inclusive of tax and gratuity, depending on where you sit. You can choose which category you want to sit in based on price and availability. We sat in Category 1, but in the back, and still had a great view.

Be advised you must pay for your entire party in advance when booking your reservation, which can be booked up to 60 days in advance.

You need to give yourself ample time to get to Pioneer Hall as all guests must park in the front of Disney’s Fort Wilderness Resort and Campground and take an internal bus system to the rear of the resort where the restaurant is located. You can also access Pioneer hall via the Bay Lake ferry transportation from Disney’s Wilderness Lodge, Disney’s Contemporary Resort and the Magic Kingdom.

WANT TO REMEMBER THIS OPTION? Save the “Vegan at Hoop Dee Doo” pin to your favorite Pinterest board. 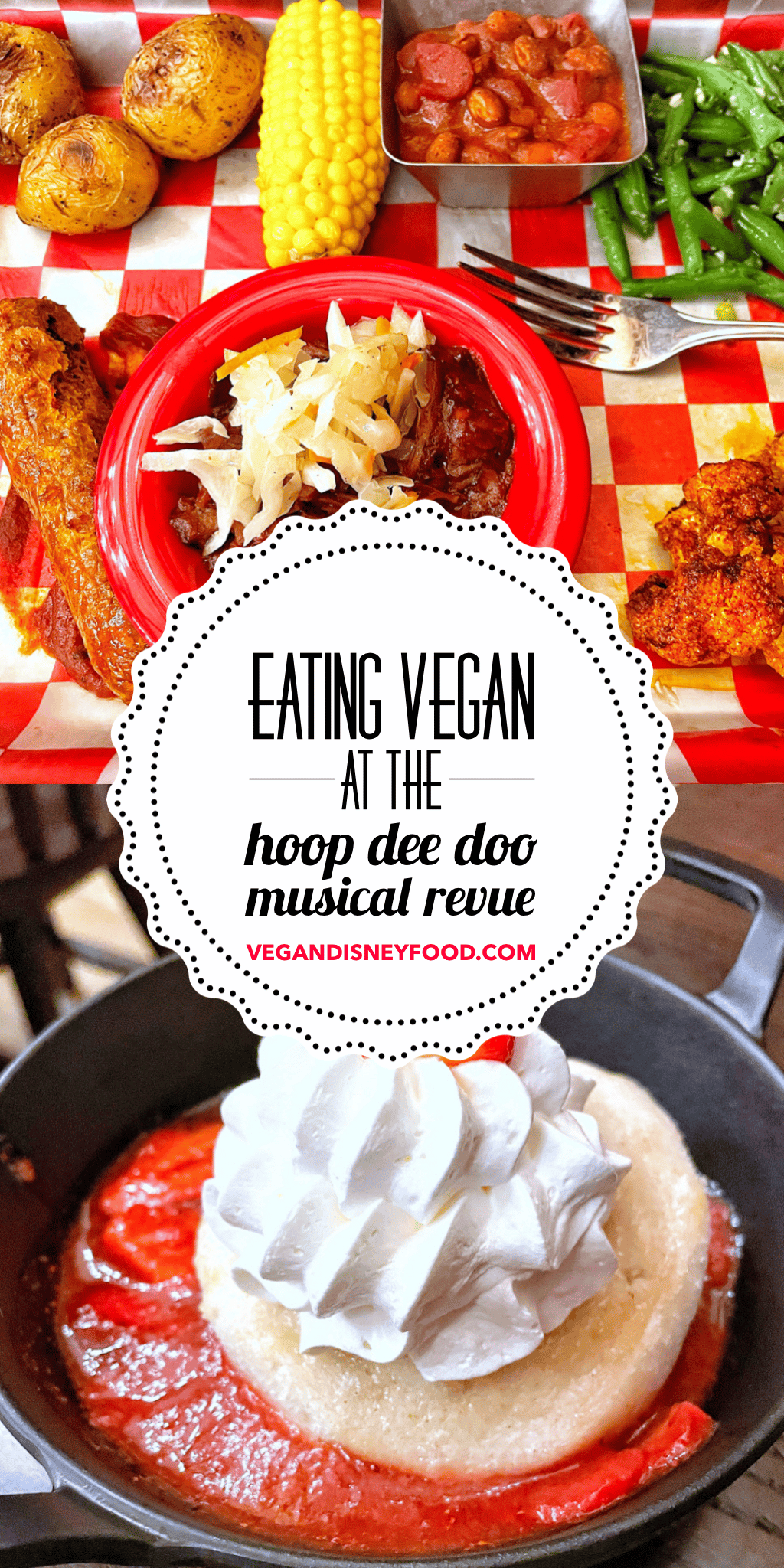