Gorgeous views of the Magic Kingdom across the Seven Seas Lagoon and wonderful vegan dishes is what you’ll find at Narcoossee’s at Disney’s Grand Floridian Resort and Spa at Walt Disney World.

This Disney Signature Dining location is known for its costal eats in a waterfront setting. Even though the restaurant relies heavily on seafood dishes, there are a handful of beautifully crafted vegan dishes on the menu as well.

You’ll find Narcoossee’s set along the shores of the Seven Seas Lagoon adjacent to the Magic Kingdom. Like many of the buildings at the Grand Floridian Resort and Spa, Narcoossee’s is representative of a section of the Sunshine State. Narcoossee is a small town in Osceola County. The name is Native American for “little bear”.

Narcoossee’s seems very unassuming from the exterior. Once inside you’ll discover an open kitchen that flows into a dual level, half moon dining room. 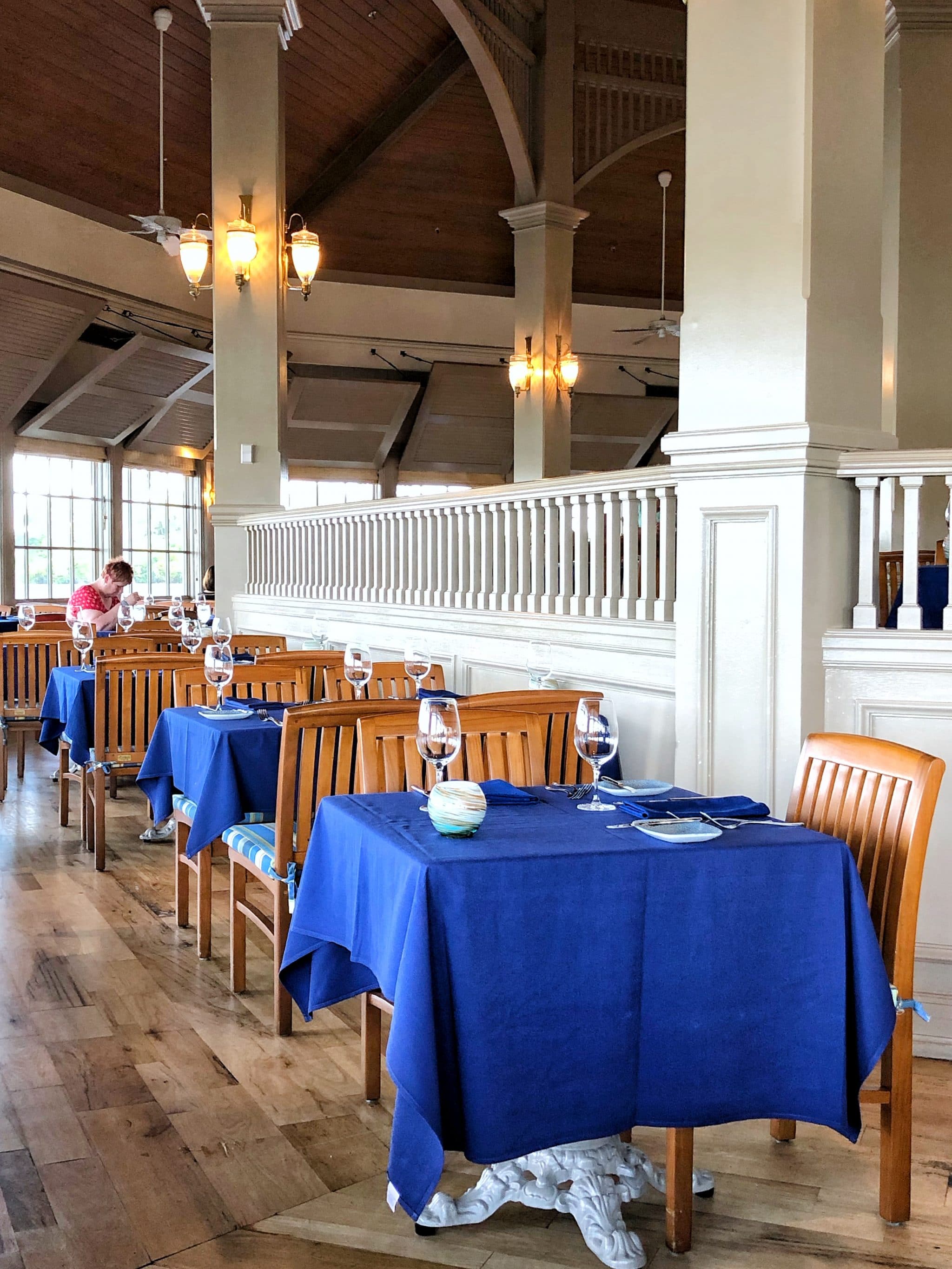 The centerpiece is the sunken bar where guests can sit on barstools and look down into the service area or up to the skylight above. 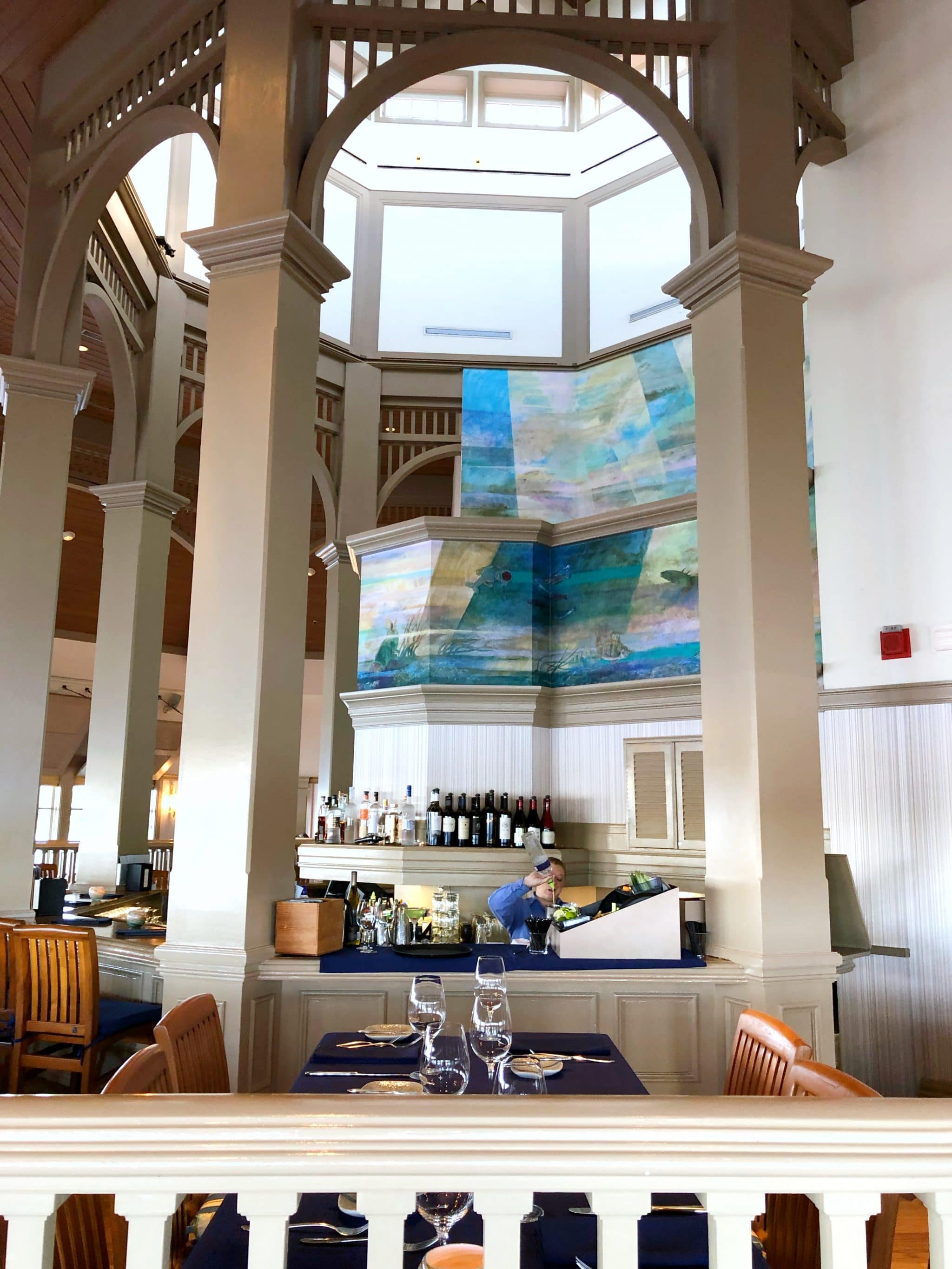 Almost all of the seating options offer breathtaking water views. 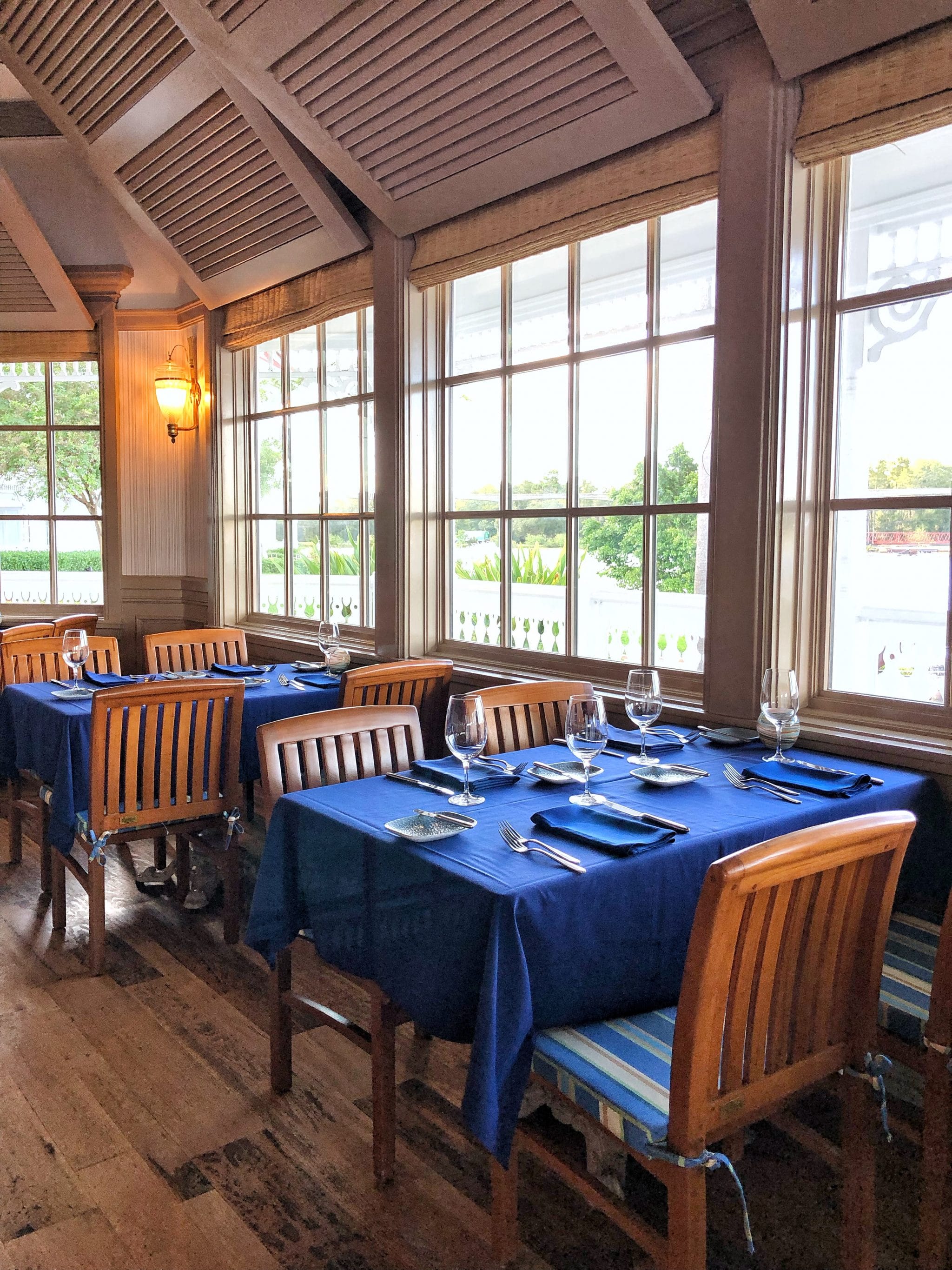 A wrap around porch offers guests the opportunity to step outside to view Happily Ever After fireworks over Cinderella Castle. You can also opt to stay indoors as the firework soundtrack is played throughout the restaurant.

Dinner service here starts out with a complementary bread service. The bread just so happens to be vegan. Our server brought out two loaves with olive oil for dipping. We asked about vegan butter and she reemerged from the back of the house with two plates of Earth Balance for the table.

We loved the bread here. It arrived warm and had a nice crust with a soft pillowy inside. 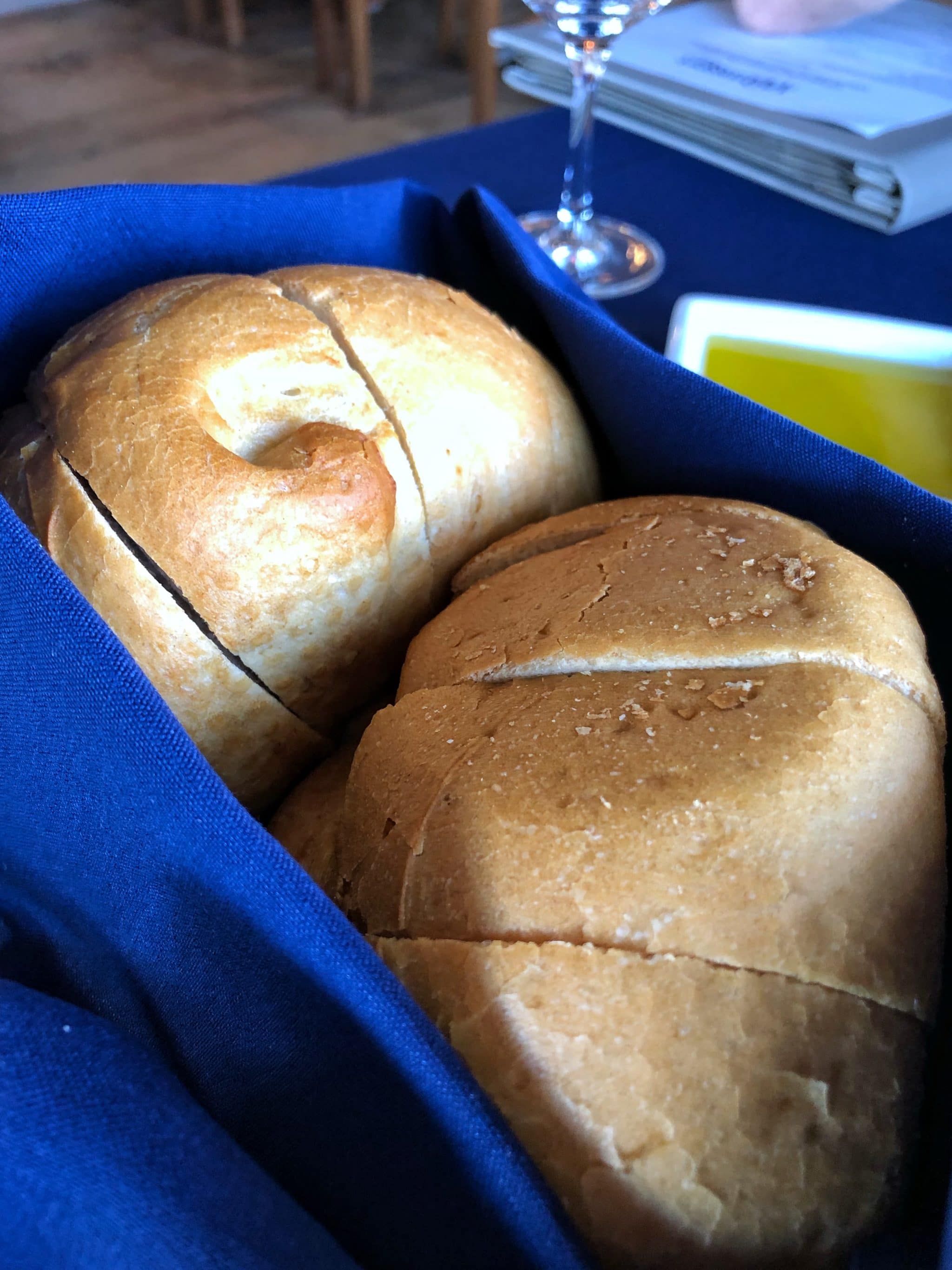 There were two appetizers listed on the menu we were presented with. One of those options was vegan as is and the other needed to be modified.

Both were equally as good so it was hard to pick a favorite.

This is the BBQ Crispy Eggplant ($14) which sat on a red quinoa cabbage slaw with edamame. The eggplant was deliciously breaded and fried and had a drizzle of barbecue sauce. 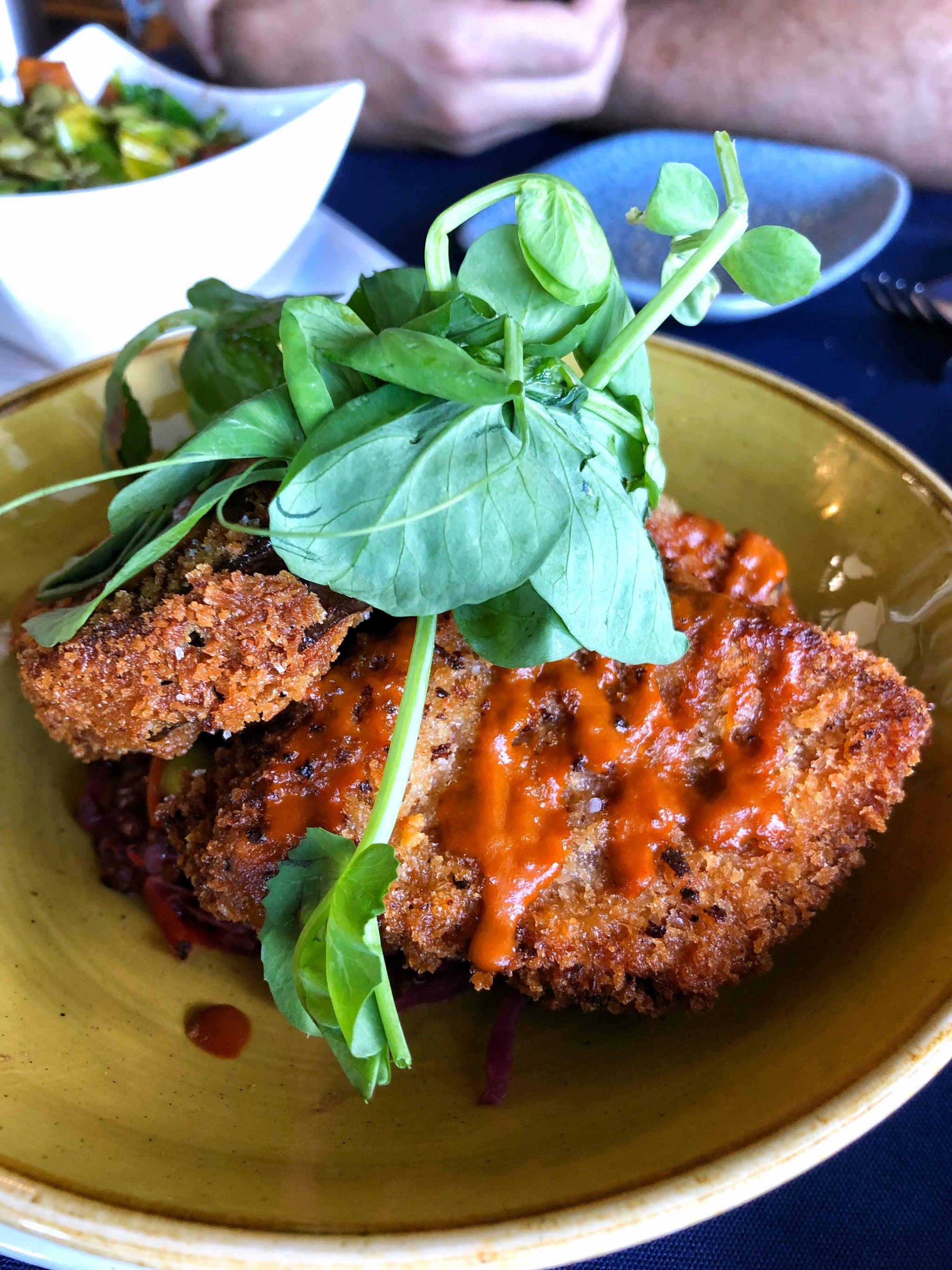 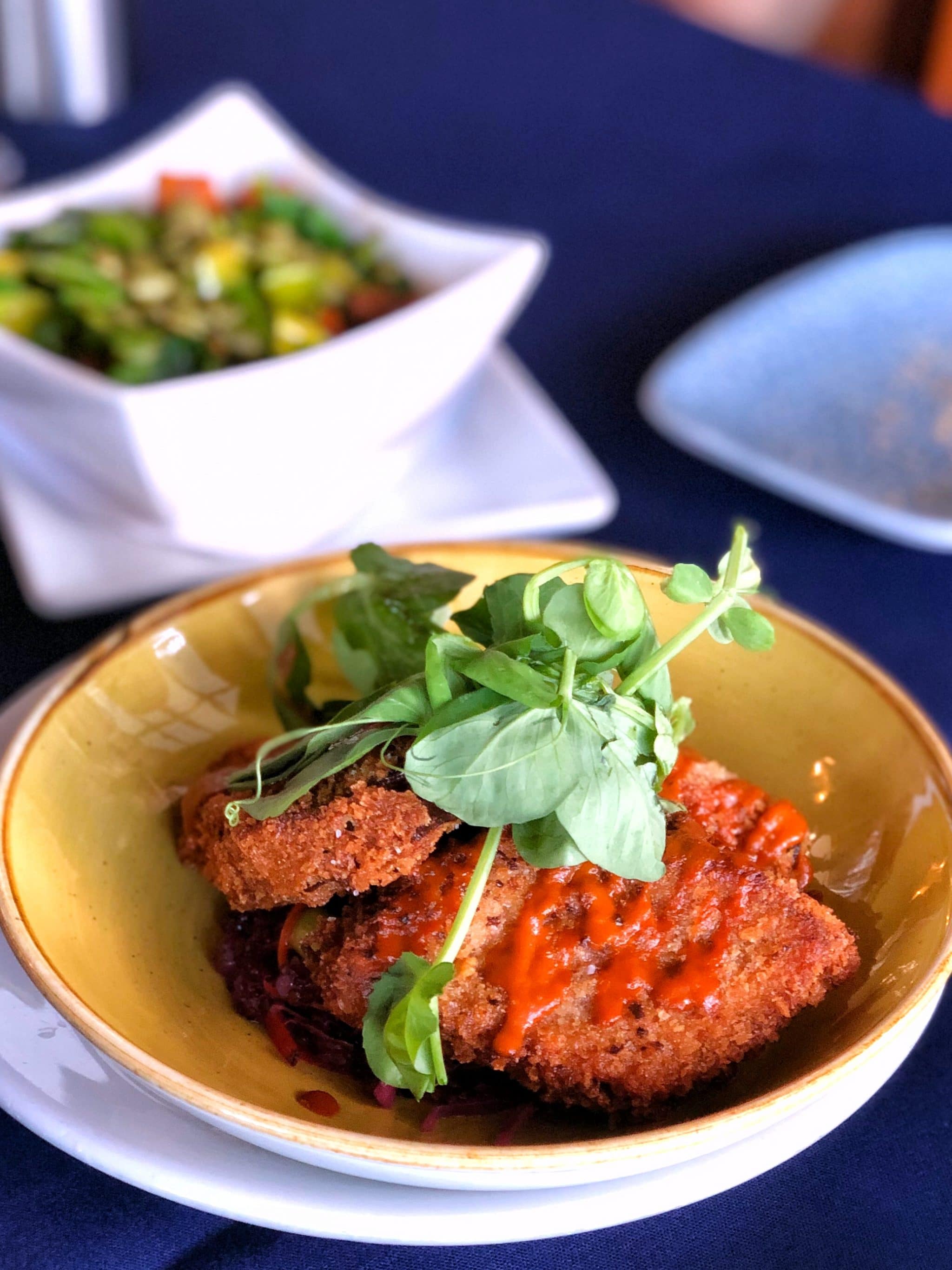 The other option is the modified Endive and Pear Salad ($15) which was composed of greens, endive, thinly sliced pears and walnuts dressed in a Fall apple vinaigrette. You’ll need to omit the bacon and cheese. 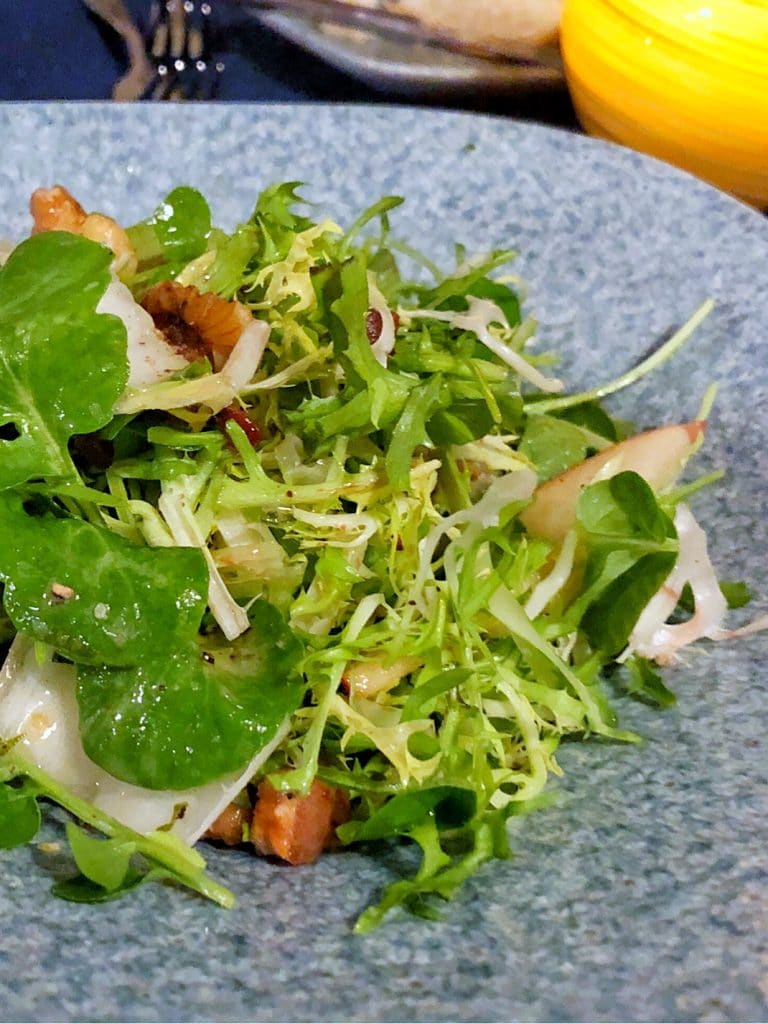 We also opted for two of the three side items from the “Enhancements” section of the menu. We loved having these as additional appetizers.

These are the modified Roasted Brussels Sprouts ($11) with lemon. Omit the bacon. I loved the small lemon segments cooked in with the Brussels.

Here are the modified Roasted Sweet Potatoes with Wilted Collard Greens ($11). The dish is topped with pumpkin seeds. You’ll need to ask to omit the chipotle aioli to make them vegan. 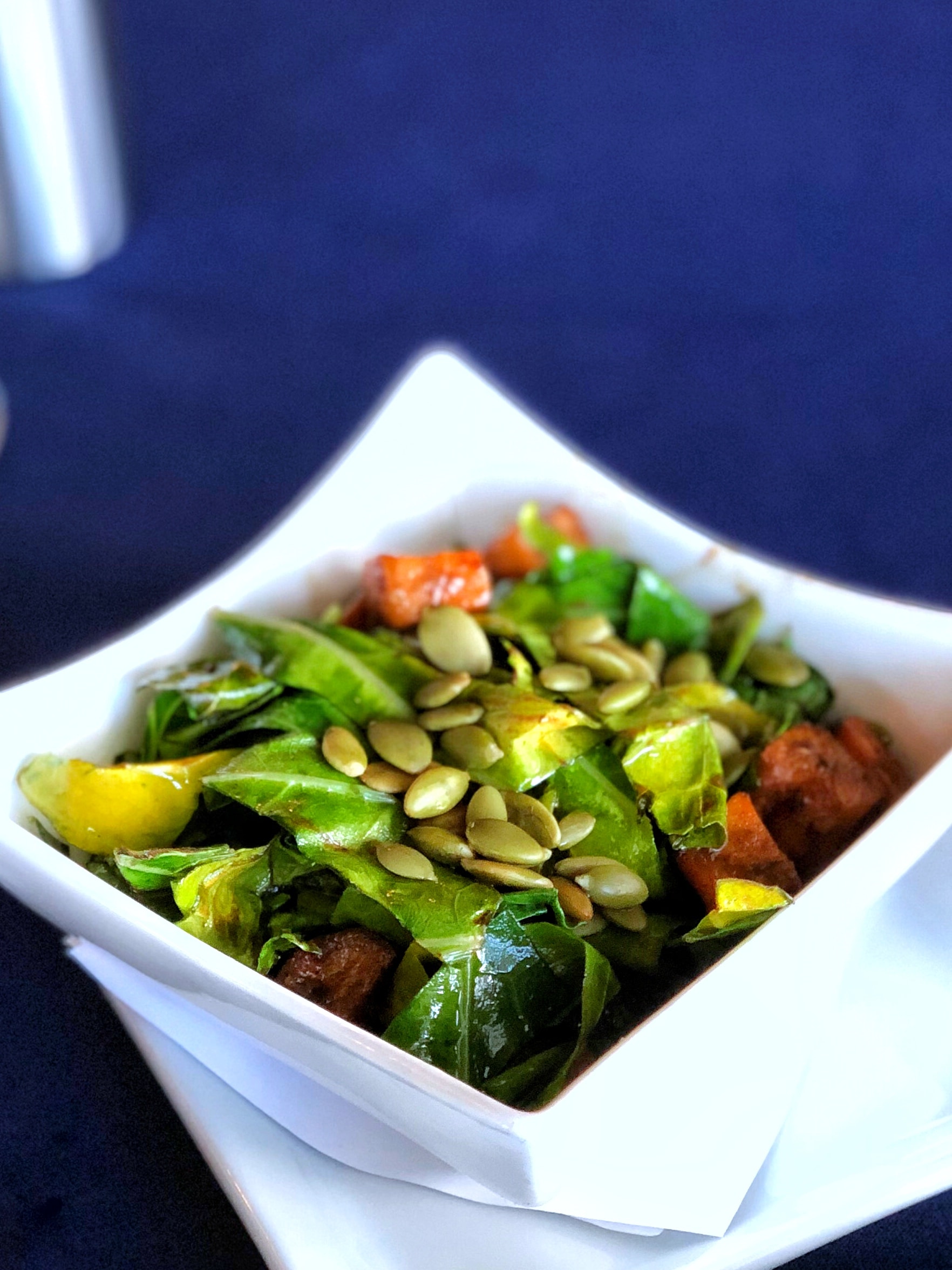 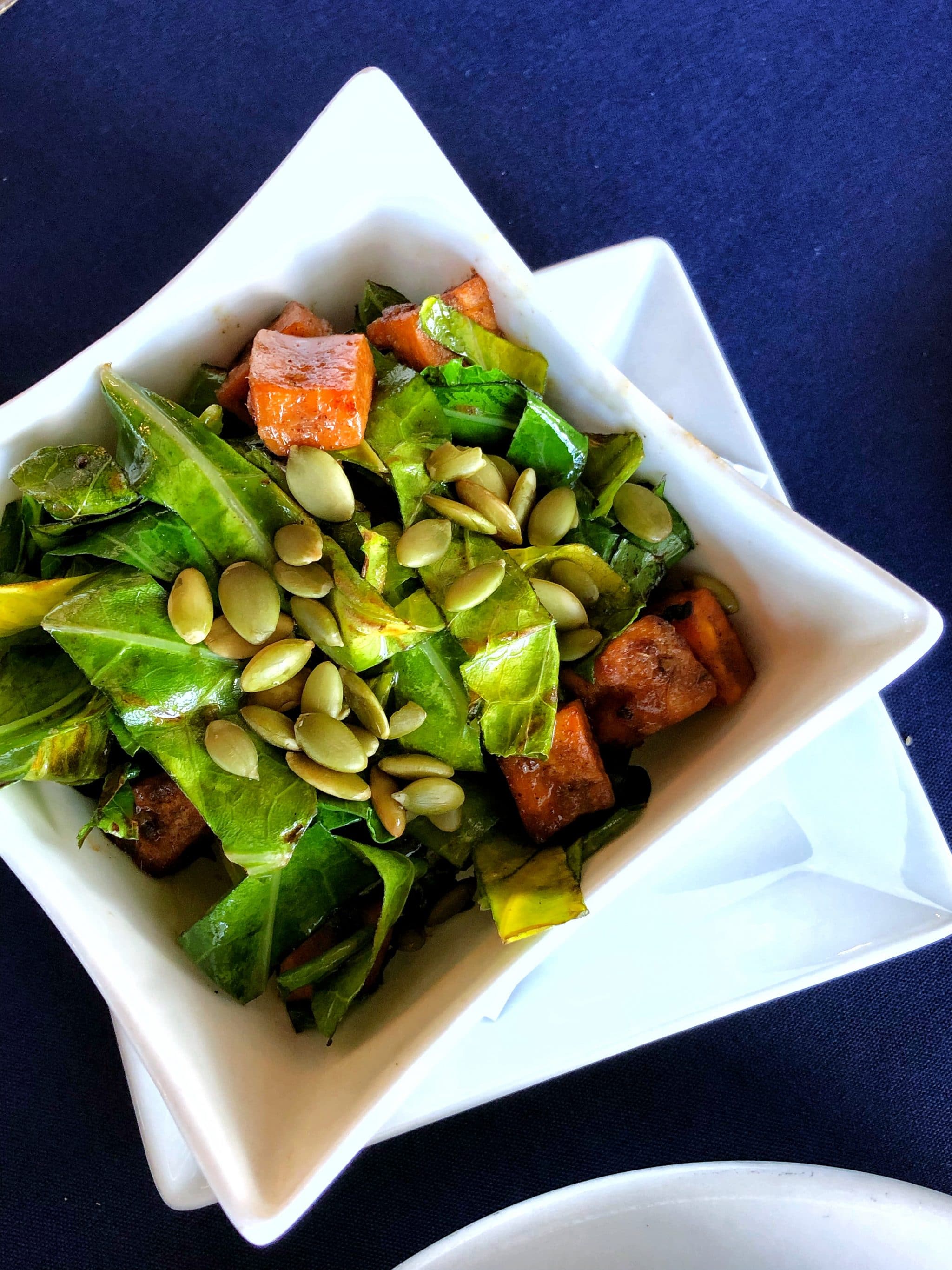 The third item was Asparagus ($13) with olive oil and parsley. You would need to omit the Parmesan cheese, ham and butter.

Because there were three of us dining, we were lucky enough to be able order all three of the entrees off the menu and try a little bit of everything.

My favorite plate of the night was the off-menu Campenelle Pasta ($29) with savoy spinach, oven-roasted tomatoes, asparagus and Brussels sprouts. Everything was tossed in a basil pistou which is a sauce of garlic, basil and olive oil. You need only to omit the cheese. 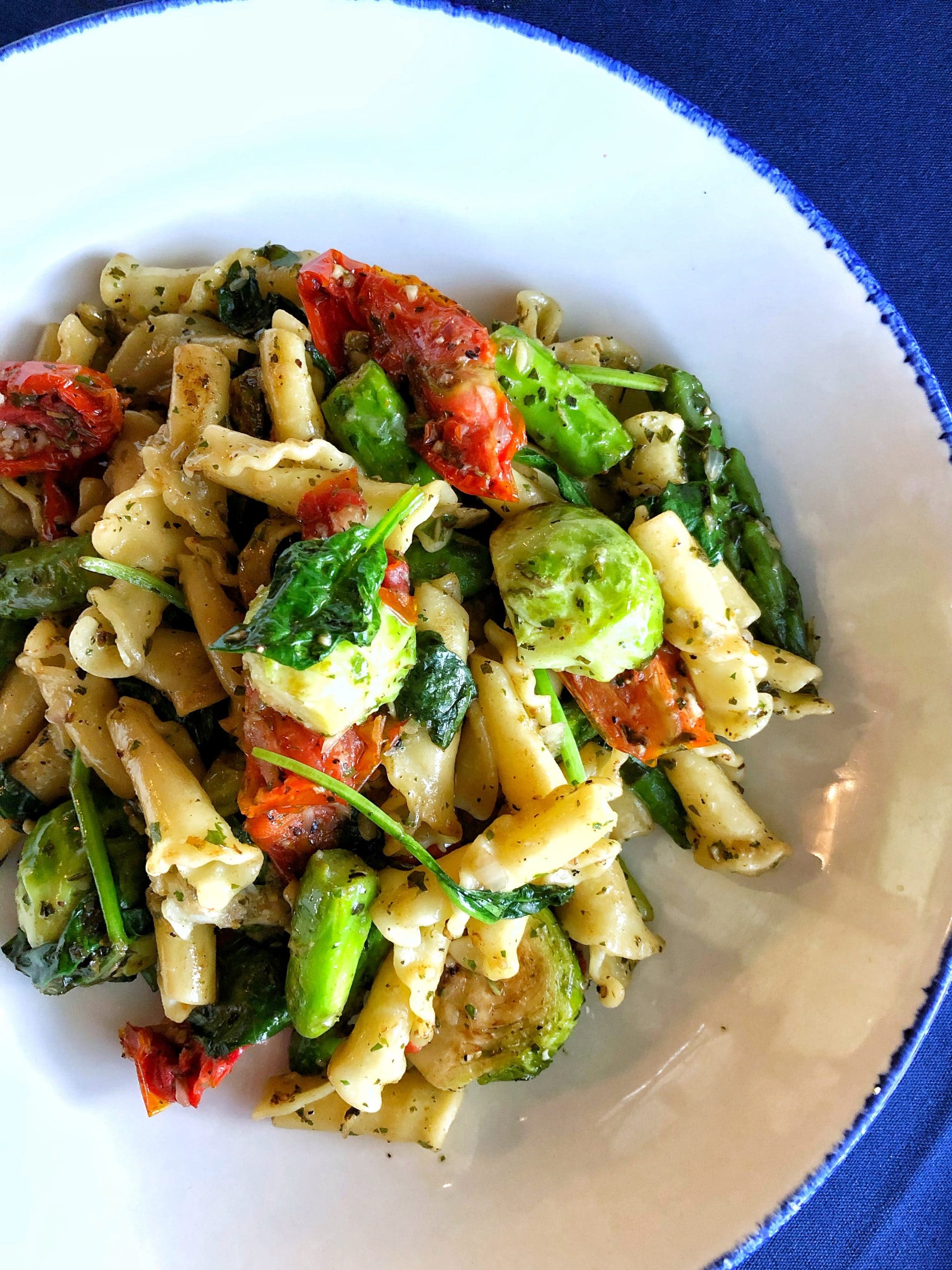 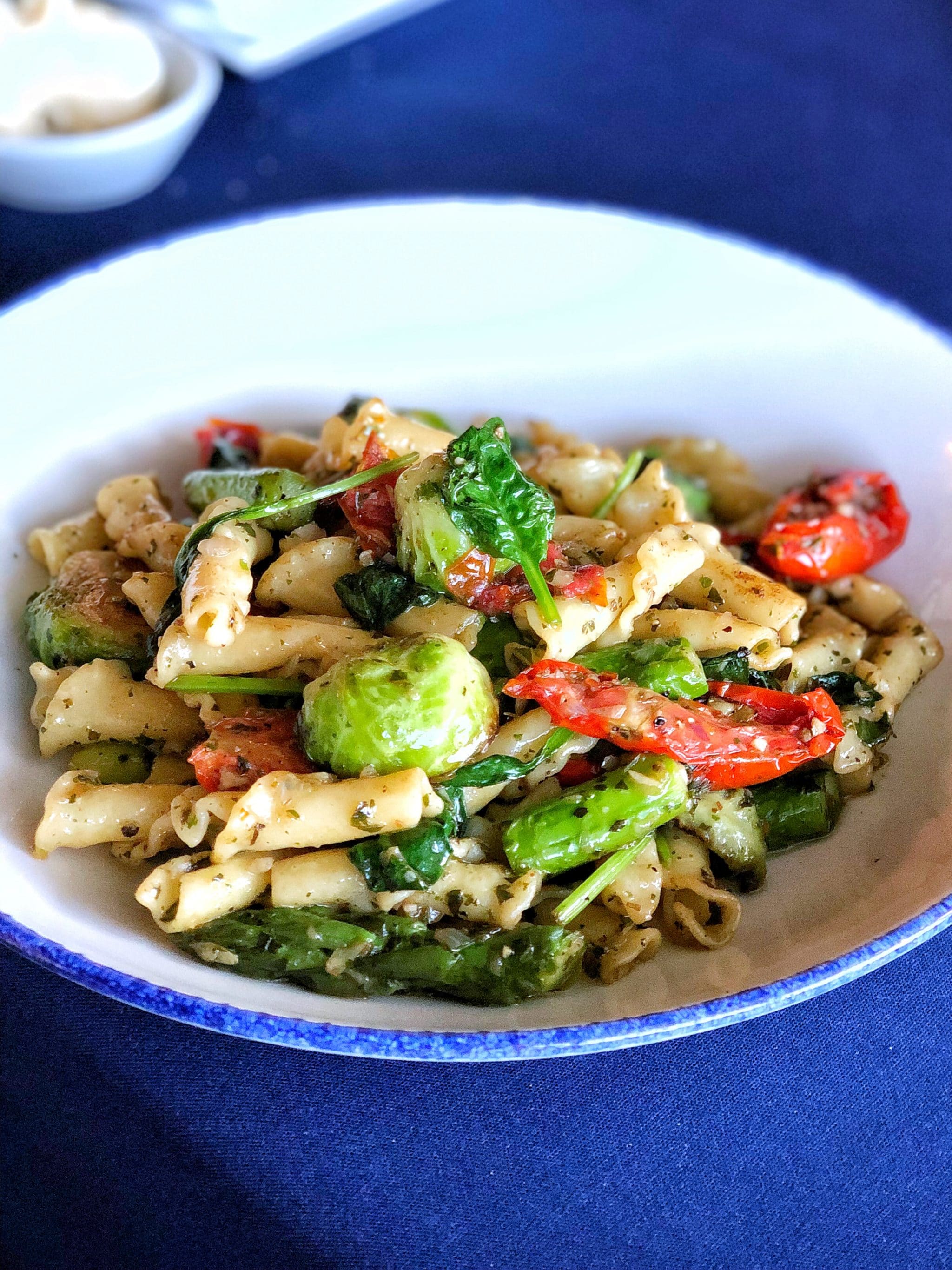 Our second entree was the Sweet Potato Gnocchi ($29) with a poma rosa tomato “meat” ragu made from mushrooms and tofu with micro sage. Skip the parmesan cheese.

This dish read more like a regular gnocchi with tomato ragu than sweet potato gnocchi. It was still delicious. 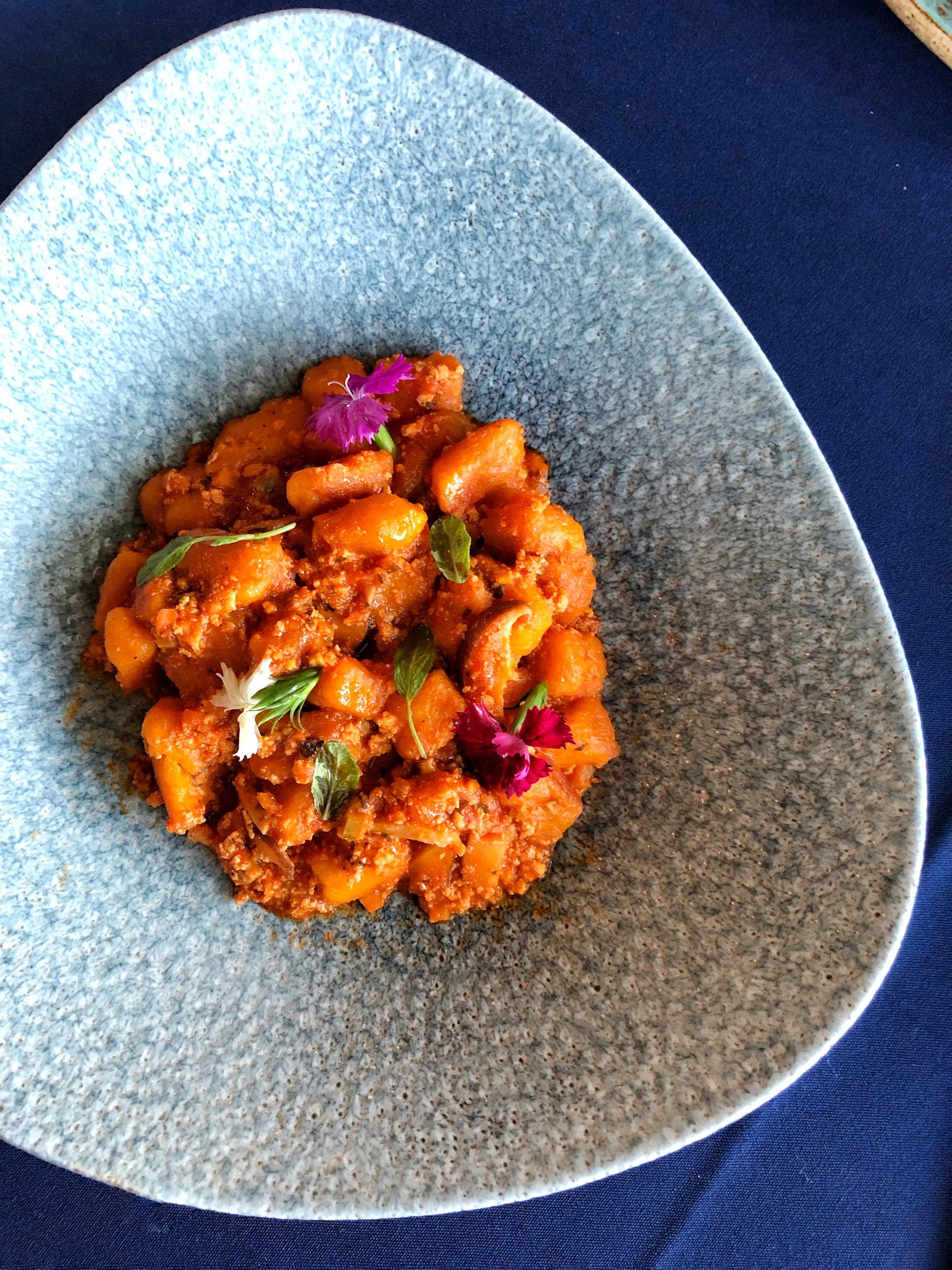 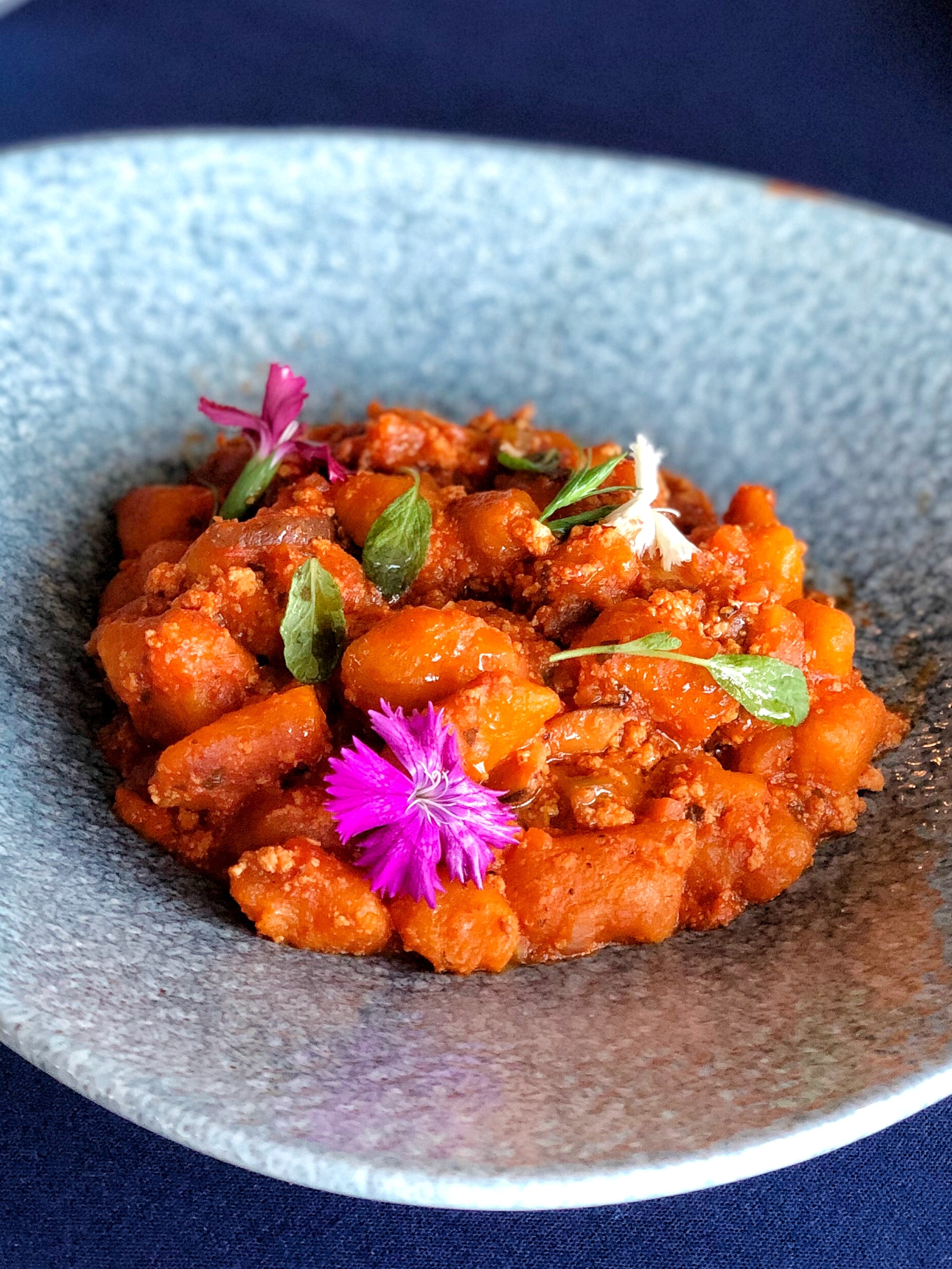 The third dish was Plant Based Fried Tofu ($29).  This one was plated with summer vegetables, black eyed peas, Carolina gold rice and heirloom grain pilau with a coconut masala sauce. I’d had this dish two years prior on an anniversary dinner with my husband and was underwhelmed.

I feel like they’ve definitely tweaked the preparation because this go round I adored the dish. 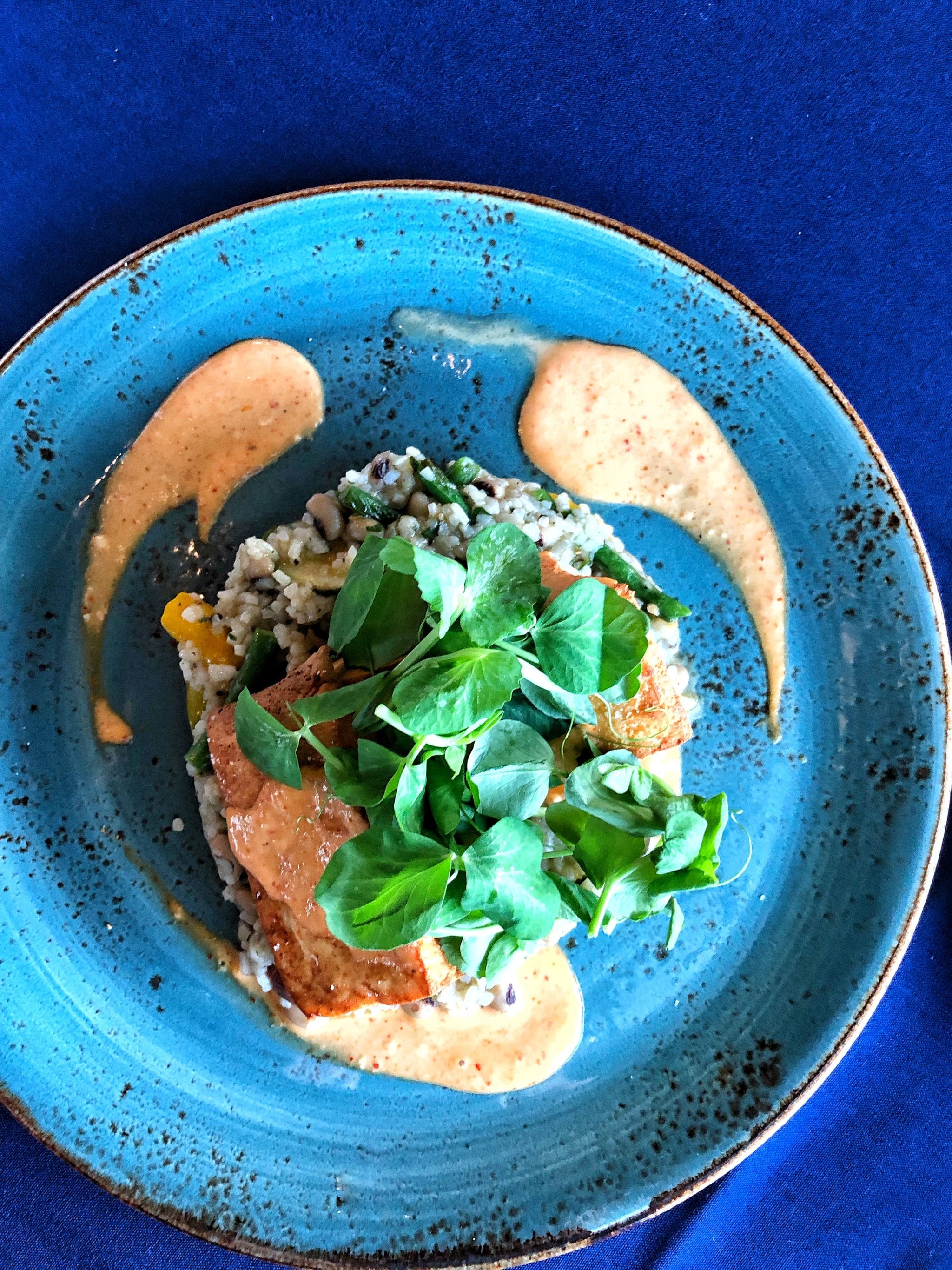 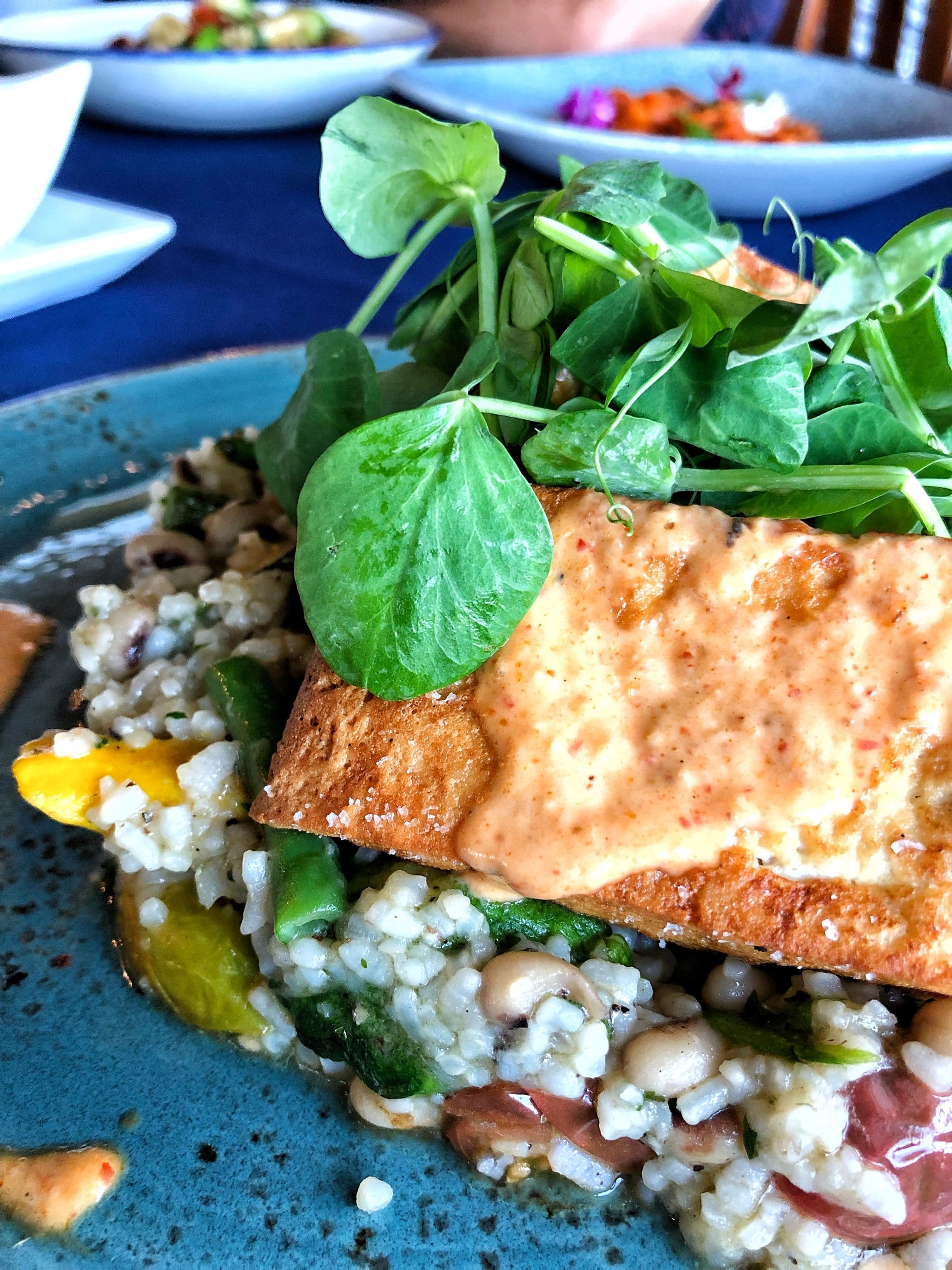 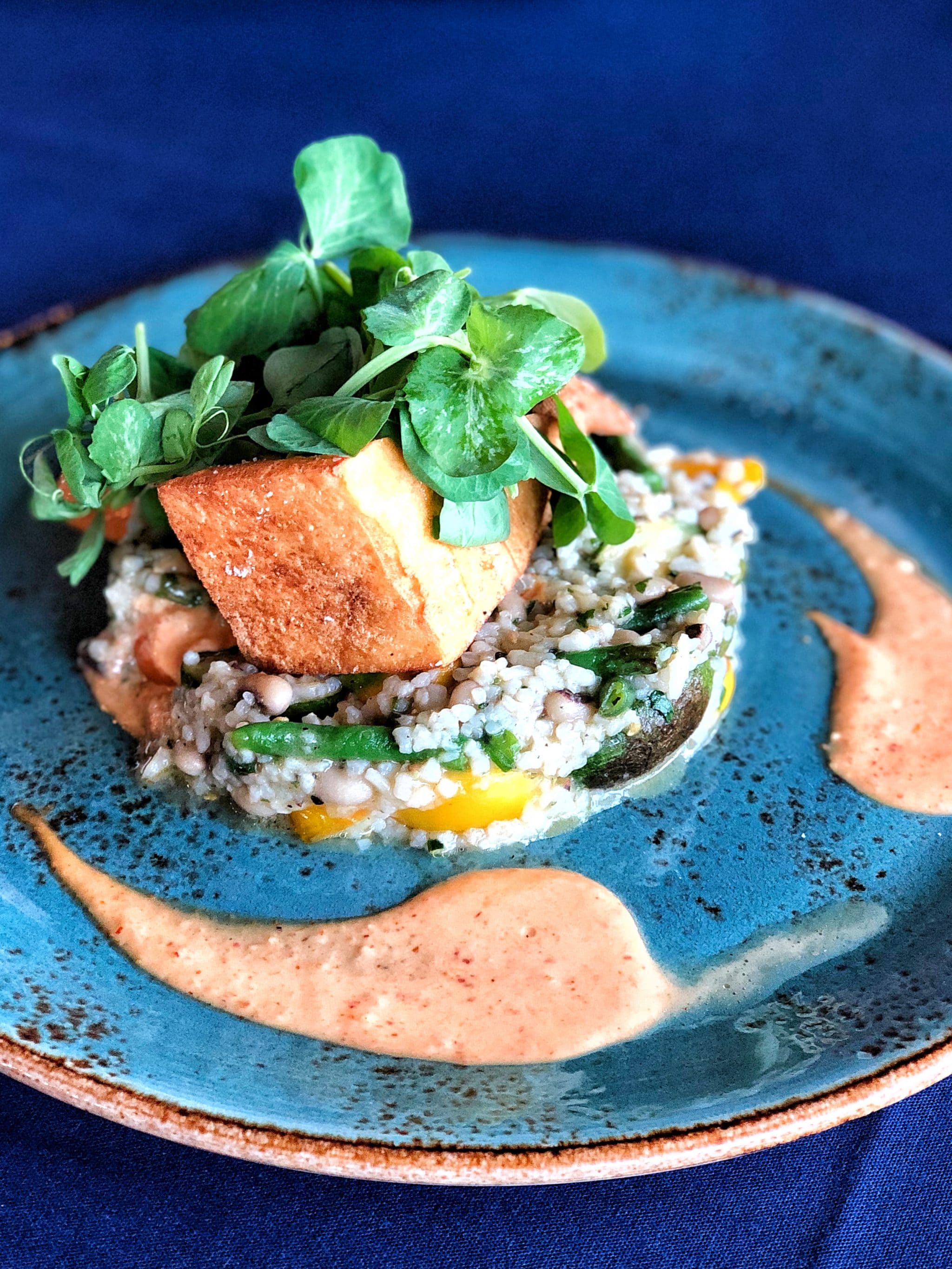 We wrapped up our dinner here with the vegan dessert option. 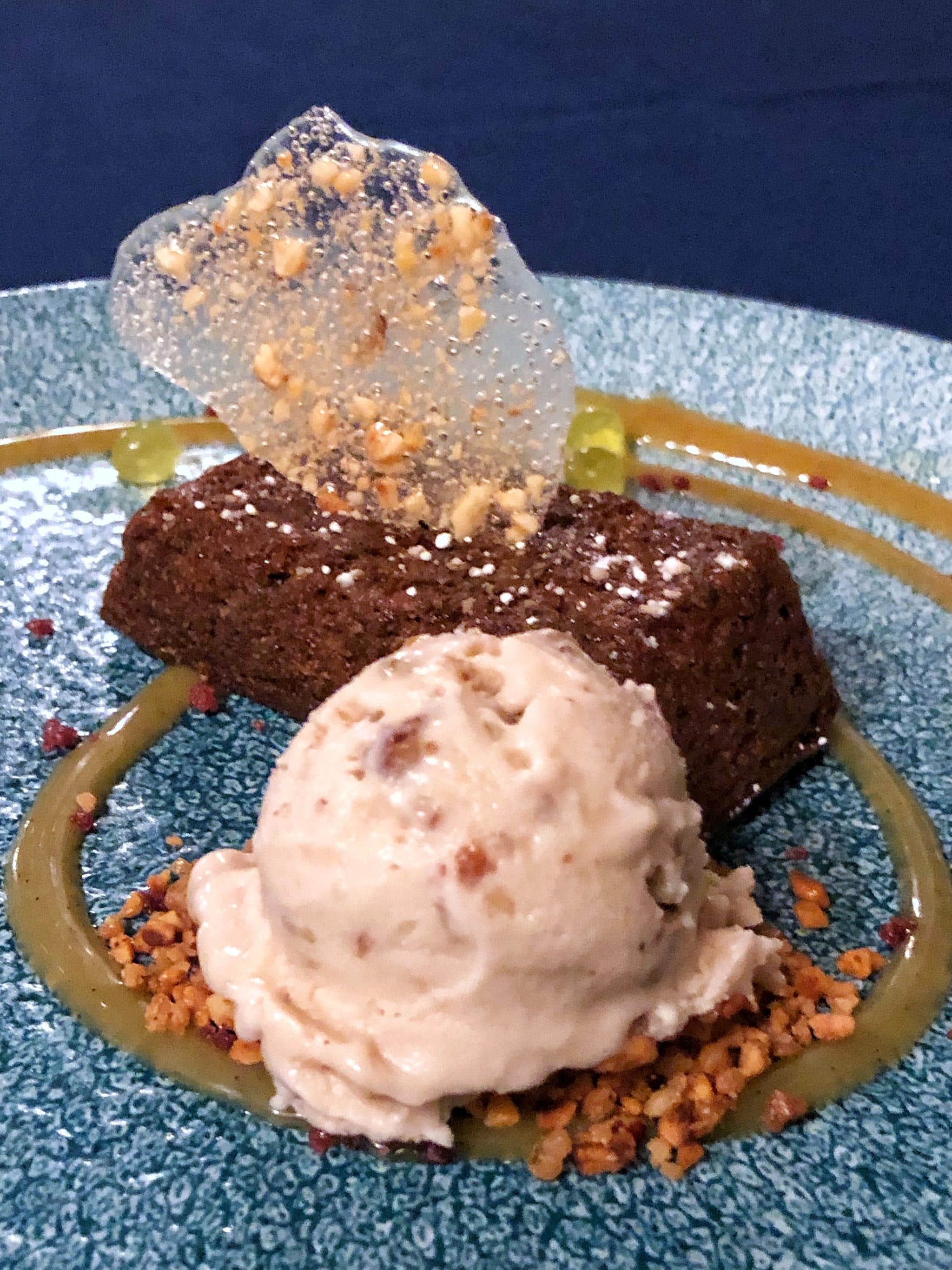 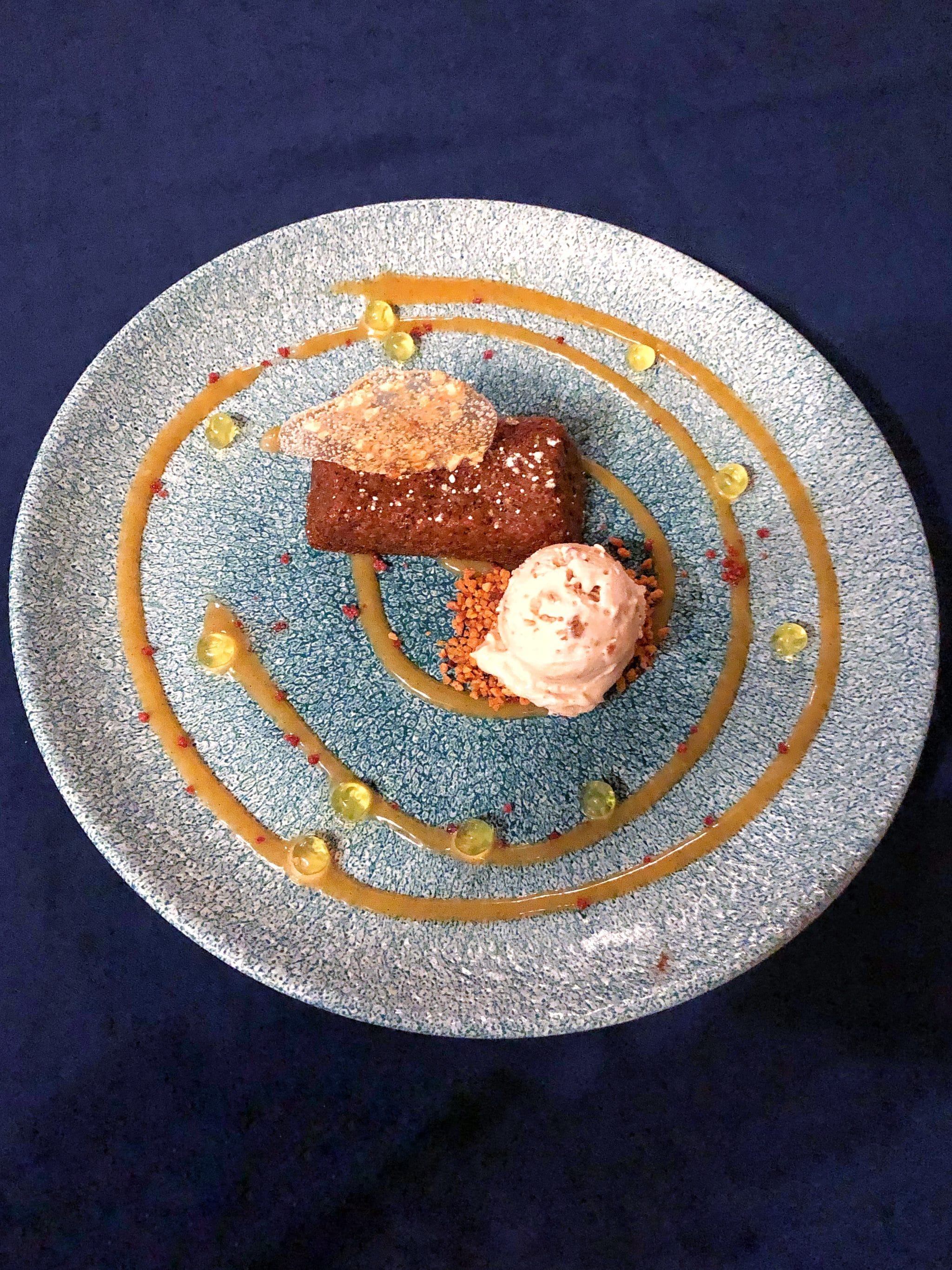 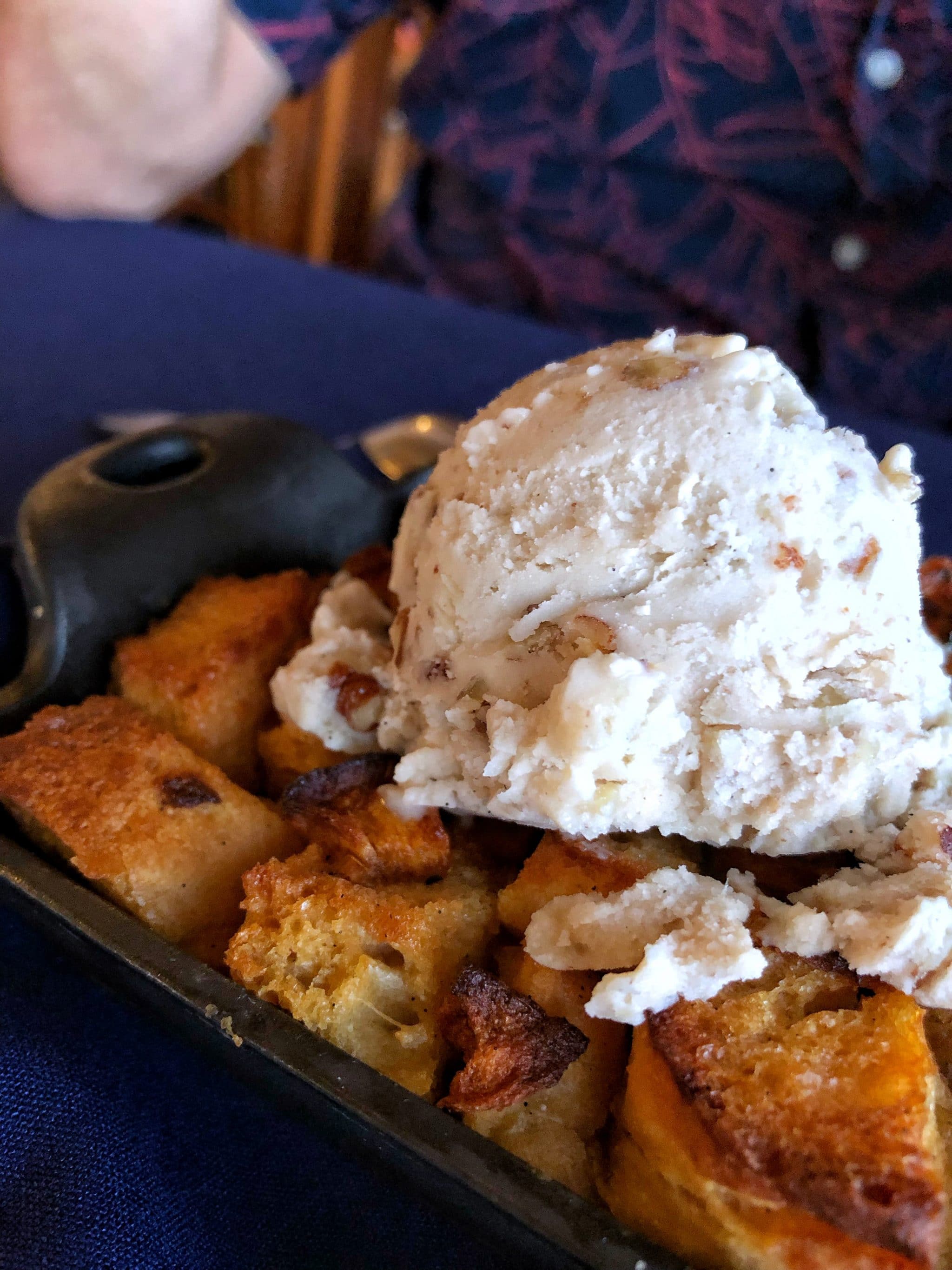 I’d have to say that when looking for a high end restaurant to dine at along the monorail loop, Narcoossee’s is a very strong contender. Other options include Citricos, which is also located at Disney’s Grand Floridian Resort and Spa and the ever popular California Grill at Disney’s Contemporary Resort.

Narcoossee’s gets two very enthusiastic thumbs up. Put this spot on your “must try” list!

WANT TO REMEMBER THIS OPTION? Save the “Vegan Dinner Review of Narcoossee’s at Disney’s Grand Floridian Resort” pin to your favorite Pinterest board. 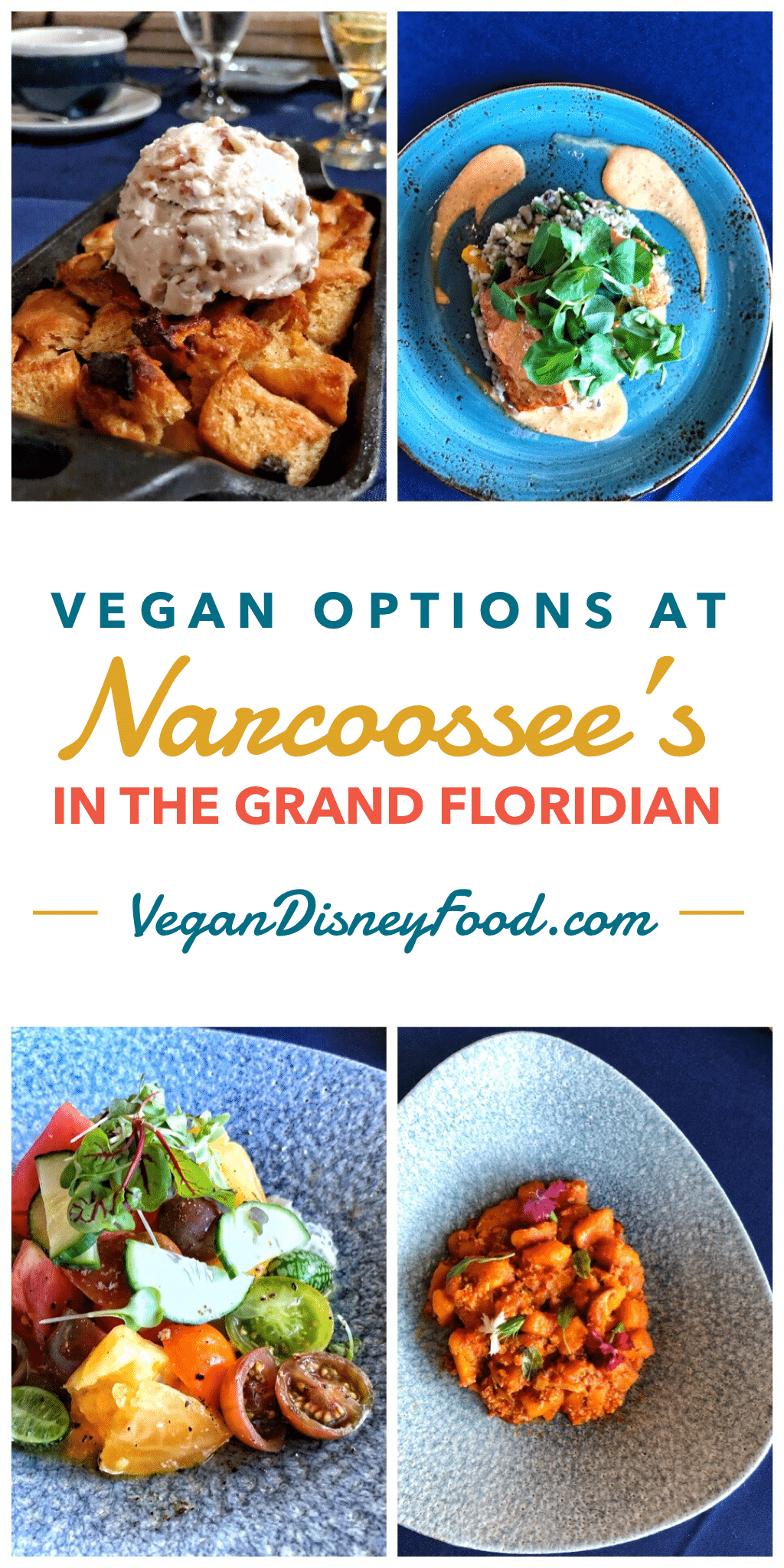