Even before taking over this site, I was also at the pre-opening celebration event for Jaleo by Jose Andres in Disney Springs. I was already vegan at the time, and enjoyed the vegetable paella they served and some other items which had no meat or meat by-products in them. I finally visited again, after going to Toledo at Gran Destino Tower a few times, I wanted to give Jaleo another try and see what was still vegan on the menu. We have our pre-opening Jaleo vegan review, and have shared a spotlight on the Catalan Bean Salad as well, but I wanted to update our review after the latest reopening. 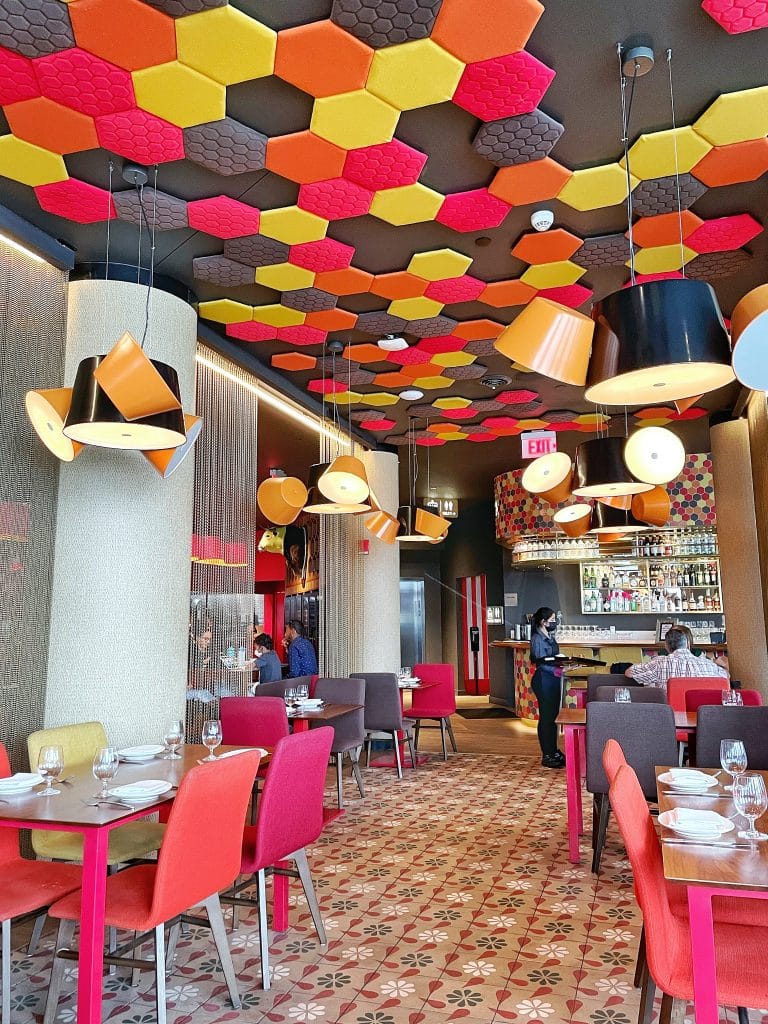 While we didn’t try everything we could on the menu, I was shocked at how much was available to enjoy as a vegan. One caveat, Spanish food is traditionally very meat/pork-centric, and this restaurant is no exception. You will walk by huge animal parts as you are brought to your table, so be prepared to avert your eyes as you pass the open kitchen area. We were seated right by the windows overlooking the Disney Springs waterfront, and it was a lovely table away from that kitchen area.

Before you go, you can check out the Jaleo Allergy Menu on their website. This has a legend which show you all the vegetarian and vegan items available on the Jaleo menu. Our server actually brought over a printed out version of this menu as well, which was so nice of him. Not listed on that menu is the Vegan Paella. We had tried it at the opening celebration, and I had heard it was still available, but wanted to make sure after the pandemic closing, that it was still possible to get for vegans. I’m happy to report that it was! 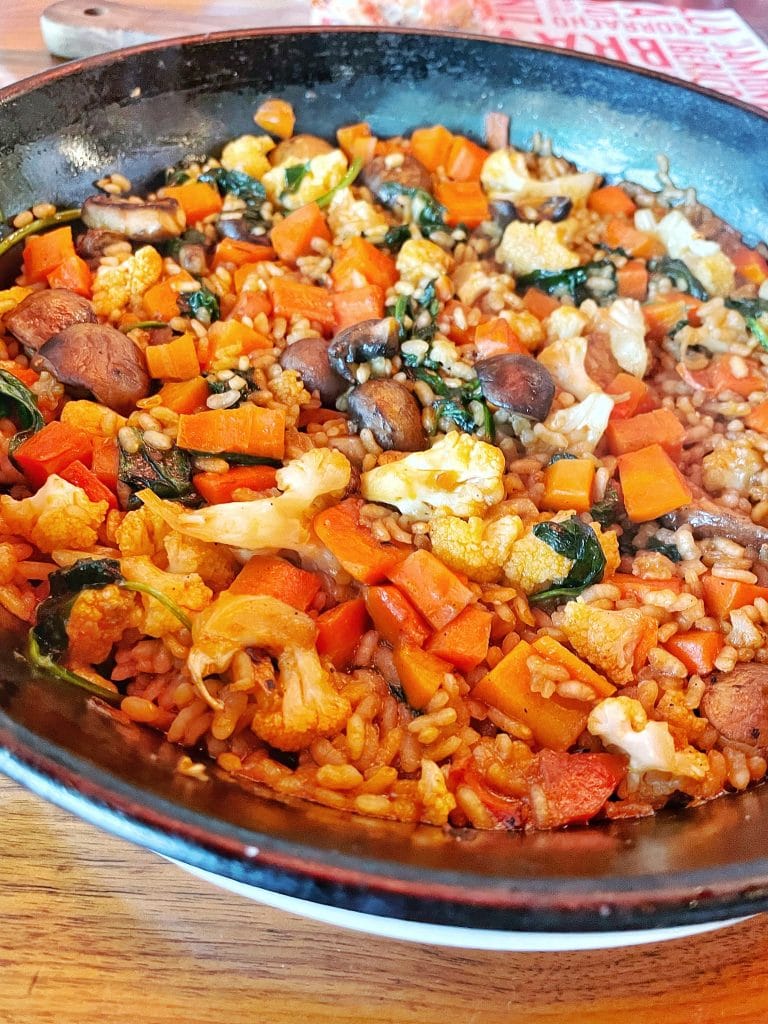 Since “Paella” refers to the flat, round pan with two handles that the dish is cooked in, even though the vegan version has no meat or seafood, it’s still traditional paella cooked over an open flame, giving it a smoky rich flavor. It is served to you at the table right in the paella pan, piping hot, with spoons to serve everyone at the table, since sharing is the Jaleo way! 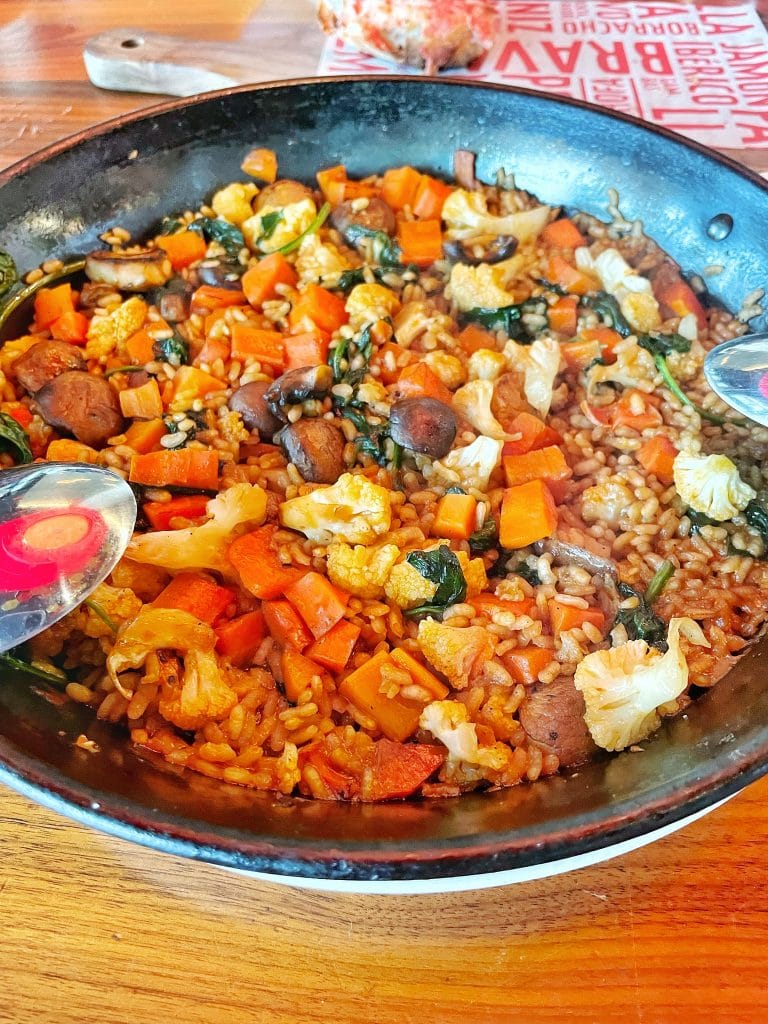 The Vegan Paella at Jaleo is composed of the traditional rice and tomato sauce base, and filled with various vegetables, including cauliflower, carrots, spinach, and mushrooms. Vegetables and rice are one of my favorite things to eat; it’s so easy to switch it up with different sauces and seasonings and enjoy flavors from all over the world. The Vegan Paella at Jaleo did not disappoint. 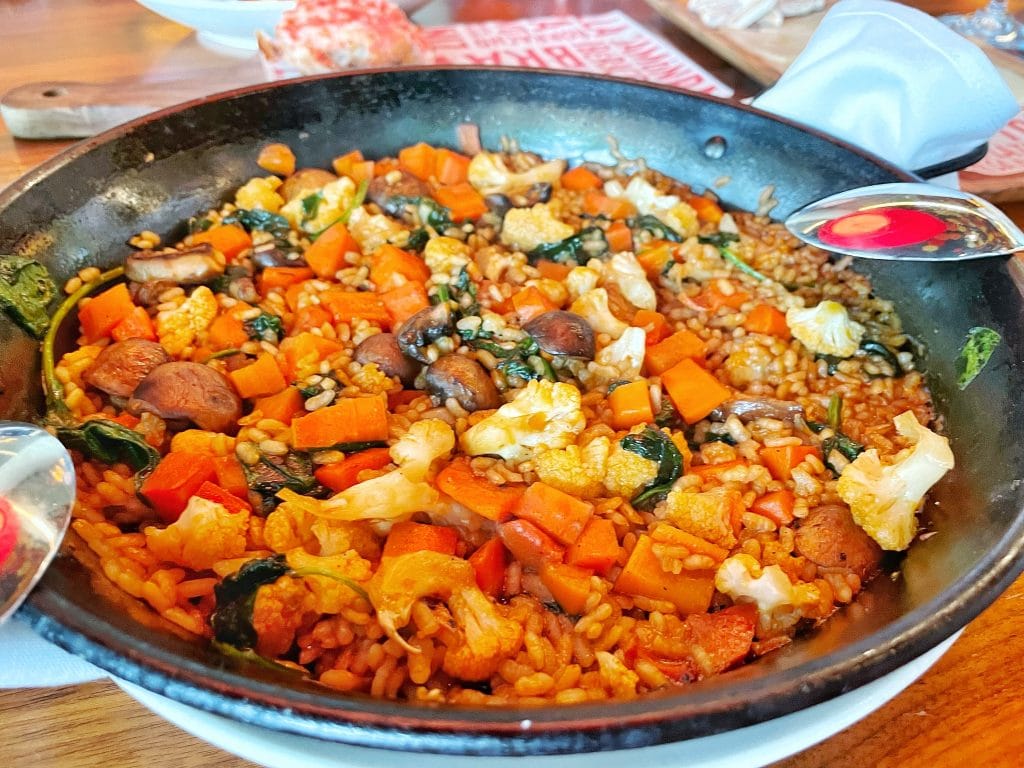 How to Order Vegan Paella at Jaleo

If you’d like to order the Vegan Paella – $21 at Jaleo, just be sure to let your server know since it is not listed on any menu. They do note on the allergy menu that it can take up to 45 minutes for special order/allergy paellas but it did not take that long at all to come out for me. Maybe 10-15 minutes at the most. Of course your mileage may vary depending on how busy they are so keep that in mind. 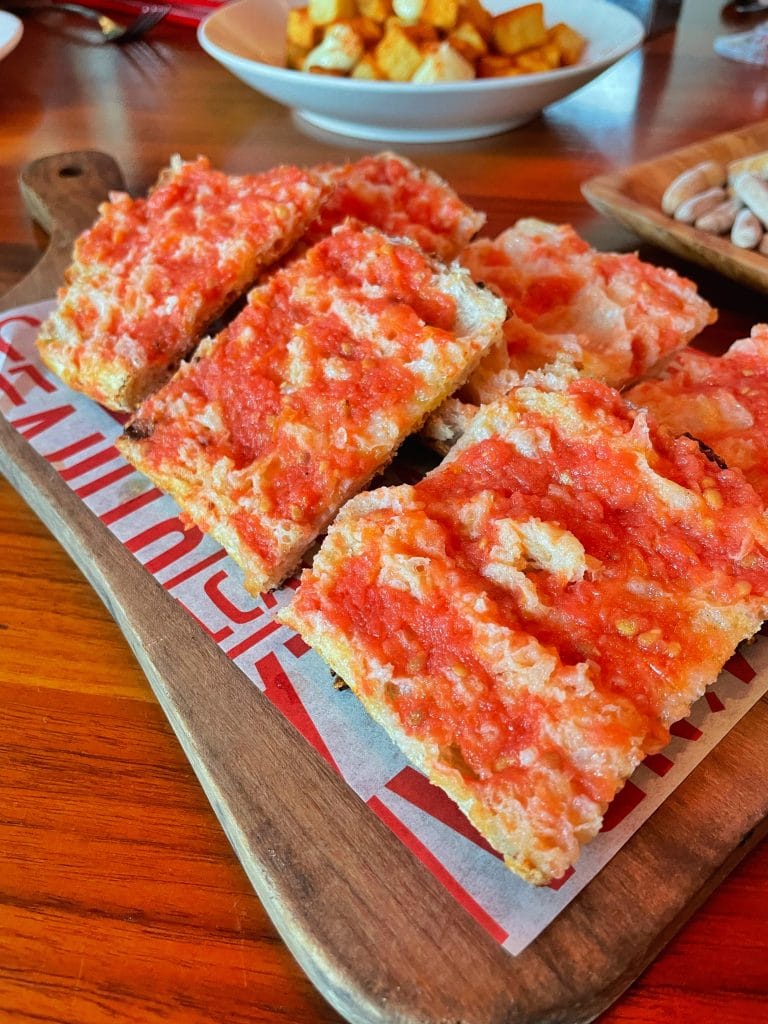 Other items we ordered on my recent visit were the Pan con Tomate – $12, which is one of my favorite things to enjoy. I love it at Toledo, and I love it here. It’s slightly easier to eat here at Jaleo, as the bread is thinner and cooked in the brick oven so it’s crispy and smoky. The tomato spread is simple tomatoes, olive oil and salt and served cold on top. So simple and so delicious. 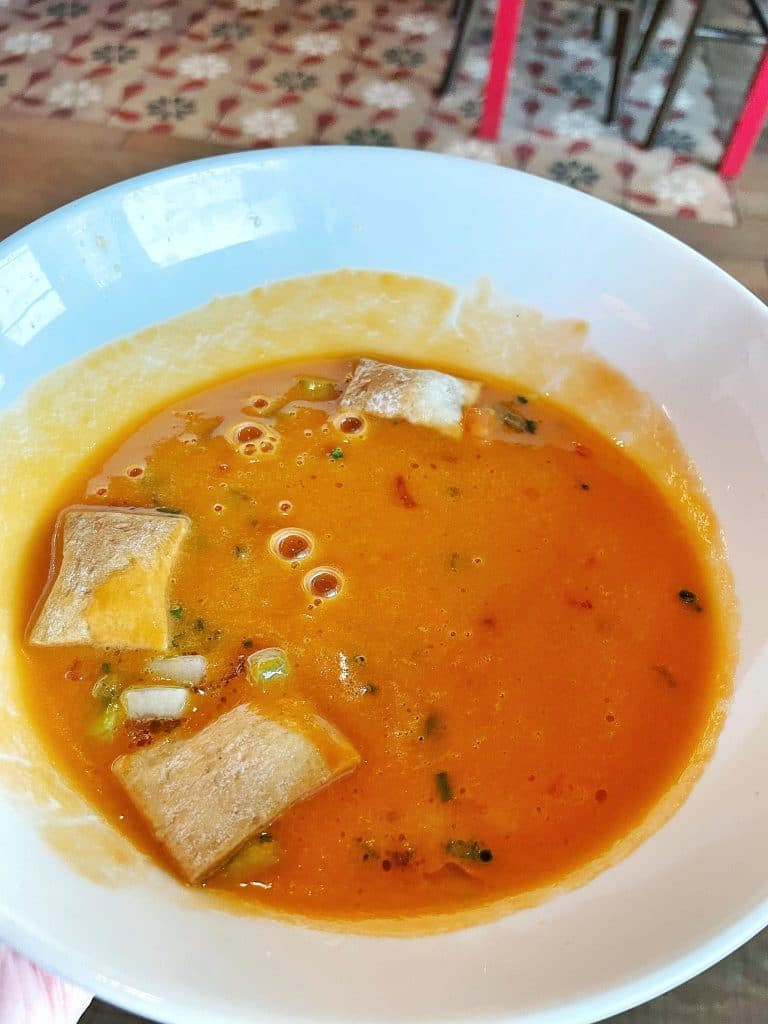 I also tried the Gazpacho, called Gazpacho estilo Algeciras – $10. I’ve been thinking about gazpacho since I tried it on a recent media day on the new Virgin Voyages ship the Scarlet Lady, and this one did not disappoint. Super fresh, it tastes like vegetables were just picked from a garden and turned into a soup 5 minutes before you try it. It is served in a bowl with additional fresh diced cucumbers, onions, and some little crunchy bread squares, poured at the table (you can see a video of that on the VeganDisneyFood instagram page). I definitely recommend this completely vegan as-is chilled soup.

My mother ordered the Catalan Bean Salad, listed on the menu as Empedrat de mongetes – $9. This again, was SO fresh and delicious. Freshly cooked Catalan beans on a bed of crushed tomatoes with olives and a sherry vinaigrette dressing. This is a great option for those looking to stay light but still have some protein from the beans.

Other items available as-is are the Espinacas a la catalana – $11, which is sautéed spinach with pine nuts, raisins and apples. This sounds amazing and I will definitely give it a try next time. Also the Ensalada verde – $9, mixed greens with cherry tomatoes, onions and olives with sherry dressing.

There are other things that can be veganized by removing the cheese, so if something catches your eye, just ask. The chefs are more than happy to accommodate and our server let us know that when we were there.

Lastly, while I didn’t order these, our table did get the Patatas bravas – $11. This normally comes with an aioli, but if you request it without, it will be vegan. The aioli is dolloped on top, so I was able to enjoy some that hadn’t touched the aioli and the potatoes were so good. Crispy and perfectly seasoned fried potato cubes.

I also didn’t have any room for dessert but there is a vegan sorbet – Sorbetes caseros – $9 available if you’ve got the space! Overall, Jaleo is surprisingly an excellent choice for multiple vegan options and there was not a plant-based meat in sight, so all of you whole food plant-based eaters will be in heaven! People wondering what’s vegan at Disney Springs is one of my most asked questions here at VeganDisneyFood, and Jaleo is a great place to consider.

Have you ever tried Jaleo at Disney Springs? Let us know in the comments if you’ve enjoyed the vegan paella or other options at Jaleo  or have plans to. 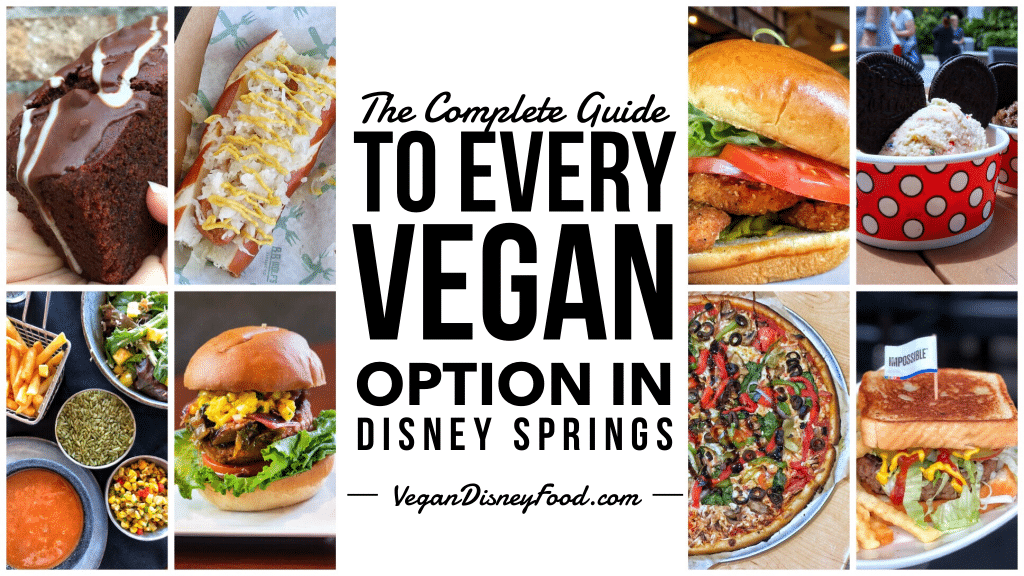 WANT TO REMEMBER THIS OPTION? Save the “Vegan Paella at Jaleo by Jose Andres in Disney Springs” pin to your favorite Pinterest board. 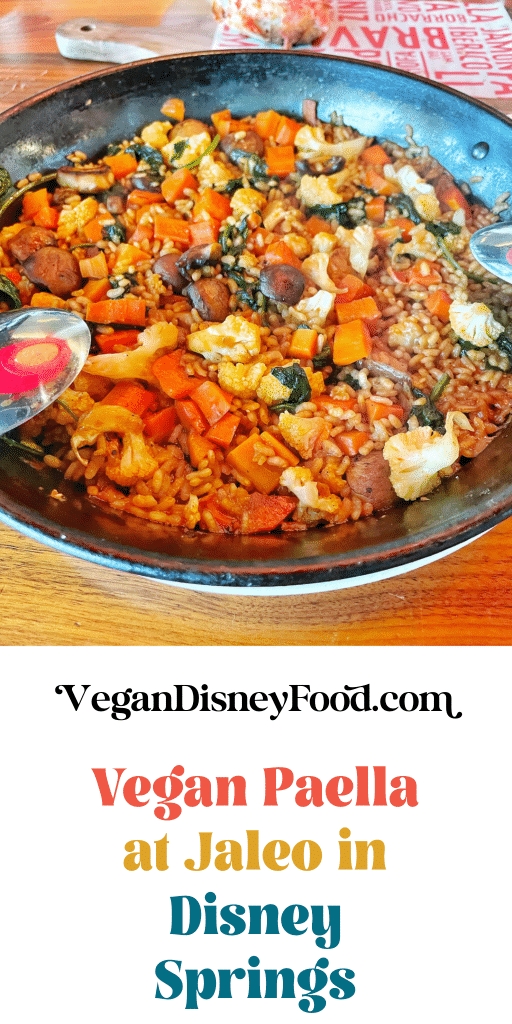