We have a full review of Tiffins vegan options as well as Nomad Lounge vegan options next door, but we recently learned of an update to the previously easily-modifiable-to vegan bread service at Tiffins. We thought it was worth its own post to help get the word out about these changes. Lately it seems like the initiative to create more plant-based options has been tapering off, and many things which were vegan as-is or modifiable are disappearing. We do have some new options appearing, but most have been in the form of a soup or salad addition. We of course, keep hoping for more options, since there is so much that could be made ‘accidentally vegan’ with little or no taste difference to the general public. Now let’s talk about bread. (Or the lack of it.)

Previously, we were also able to easily modify the Tiffins Signature Bread Service to be vegan ($14 -up from the previous $12 price tag). We were informed by two readers that this bread service has been changed and is no longer an easy fix to make vegan.

Tiffins Signature Bread Service  now contains Brazilian cheese bread and Thai Milk Bread as standard items. Obviously those both contain dairy. The Pappadam is still there but is fried in a shared fryer with dairy products so those with allergies take note. The Methi Paratha is still available and the new dips that come with it do appear to be vegan as is – Coconut Thai Curry Sauce, Ginger Apricot Sauce, and Guava sauce. The previous vegan sauces are no longer available. 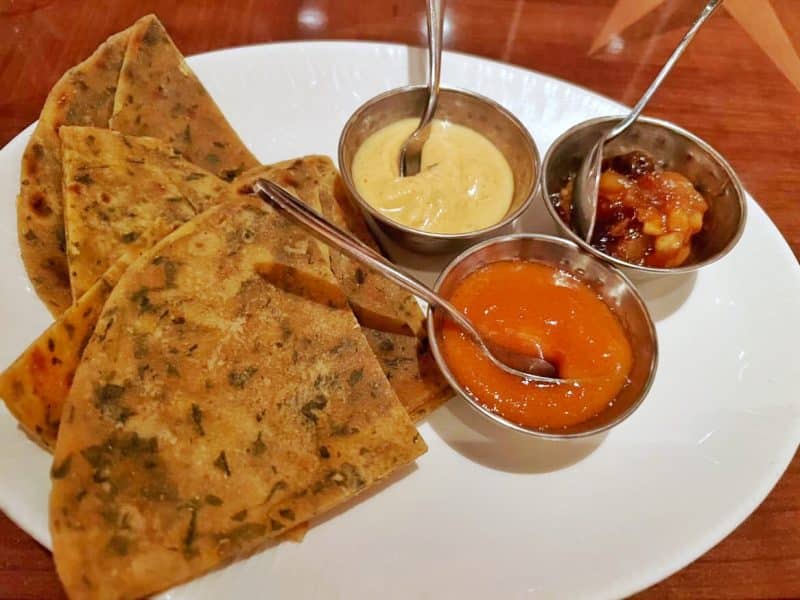 Here’s the new vegan options above, with the vegan as-is sauces: Coconut Thai Curry Sauce, Ginger Apricot Sauce, and Guava sauce. Pappadam can be added if you are okay with the shared fryer. Below is the regular bread service as it comes now at Tiffins: 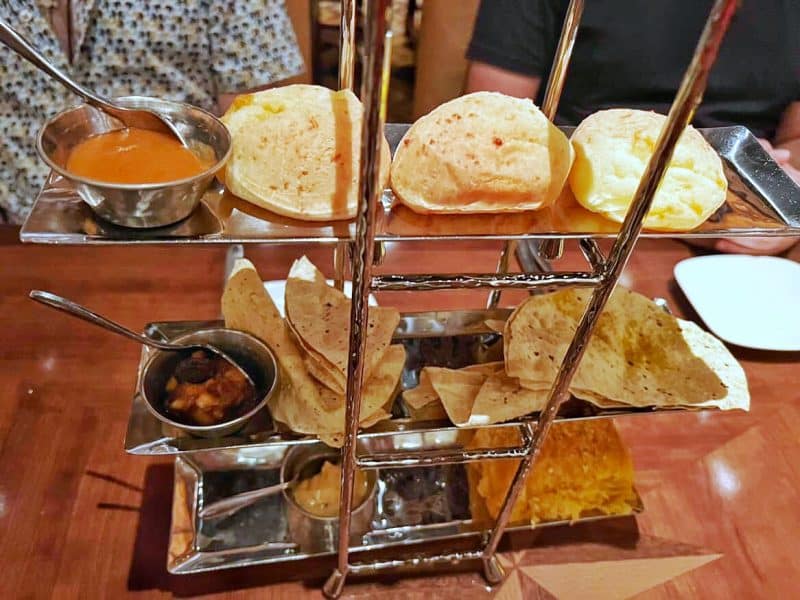 I’m really not a fan of huge serving displays like this and feel like they are very intrusive and obnoxious at the table, but that may just be me. I am grateful we have new dipping sauces to try, but really wish they’d have kept the other vegan bread option for us.

If the paratha looks strangely familiar that’s because it’s the same bread that was once served with the plant based Farmhouse Meatball at the Epcot International Flower & Garden Festival. It’s also currently being served with the Vegetable Curry Crew Stew at Skipper Canteen.

What are your thoughts on this change? Have you been to Tiffins recently to experience it? It seems to have happened in early September of 2022. Let us know in the comments below.